The opulent, refined town of Newport Beach with it’s 10 miles of waterfront along the Pacific Ocean, may be by the seaside but it is as far away from a budget bucket and spades brigade as can be. You’ll find it in Orange County along the sparkling and highly manicured Californian Riviera just a short drive from John Wayne airport.

You’ve probably guessed that the airport was named after the swaggering movie cowboy dubbed “The “Duke” who lived and died here alongside other Hollywood greats.

Newport Beach still exudes some of that old-time Hollywood feeling, and one way to capture it is through the history of its past resident celebrity greats and their amazing waterside homes, is by Duffy boat.

Must take a Duffy tour

The waterfront at Balboa village has a carnival style Amusement Area with its own colourful ferris wheel that marks out where you can pick up a Duffy boat to tour the harbour. These blue-topped open-sided boats are a quaint type of quiet bay or lake cruiser powered entirely by electricity and I can report, are great fun to manoeuvre.

Our guide, Carolyn Clark, pointed out the celebrity homes as we smoothly glided over the sun speckled harbour water: “That’s where Johne Wayne once lived,” she said nodding her head to a surprislngly unpretentious house on the water’s edge facing Balboa Is­land. “That’s where Shirley Temple lived – the house at the closest point to the Coast Guard Beach where the peninsula ‘bends’,” adding that the child star was named the first “Miss Newport Beach” at the age of 13. The original house was torn down and replaced by a beautiful home made of stone, glass, and wood.

It was a long list of stars and anecdotes that included Michelle Pfeiffer, Candace Bergen, Chuck Norris, Jay Leno and Nicholas Cage who famously fled Newport after a break in.

Must shop at Fashion Island

On dry land it’s all about the shopping. For those with deep pockets, Fashion Island is pretty stylish with its collection of 200 high end shops such as Neiman Marcus, Bloomingdale’s, Urban Decay and Macy’s – you get the picture. It’s a pretty environment, fantastic designer shops with great views.

For a more quirky shopping experience I ventured through the streets along the town’s coast even taking a ferry to Balboa Island to check out the scene comign back with jerky from the Balboa Nut Company and some T-shirt souvenirs from the slightly cramped and slightly chaotic Pier Shop. And some sunscreen.

Must walk along Balboa Pier

Sun screen in hand, I headed for the Balboa Pier Beach and its beautiful sand dunes. It’s easy and cheap to park close to the beach and you can of course pitch up and sunbathe but, you can also see views without getting sandy – as I did. The pier stretches 920 feet along the blue waters of the Pacific ocean. It’s dotted with locals fishing for who-know-what – mackerel I think.

Certainly I didn’t see anything being caught during the couple of hours that it took me to saunter along its length. I nipped into Ruby’s restaurant at the end of the pier for a cuppa and headed back again stopping to rest on the benches simply to look at the view and the beach lovers splashing around or surfing.

Crystal Cove is a hidden arc of beach just off the Pacific Coast Highway. It is famous for two things: The first is for having featured in “Beaches” Hollywood blockbuster starring Bette Midler. I cried while watching that film and standing close to the white-washed villa that featured in it, I could recall the emotional scene. 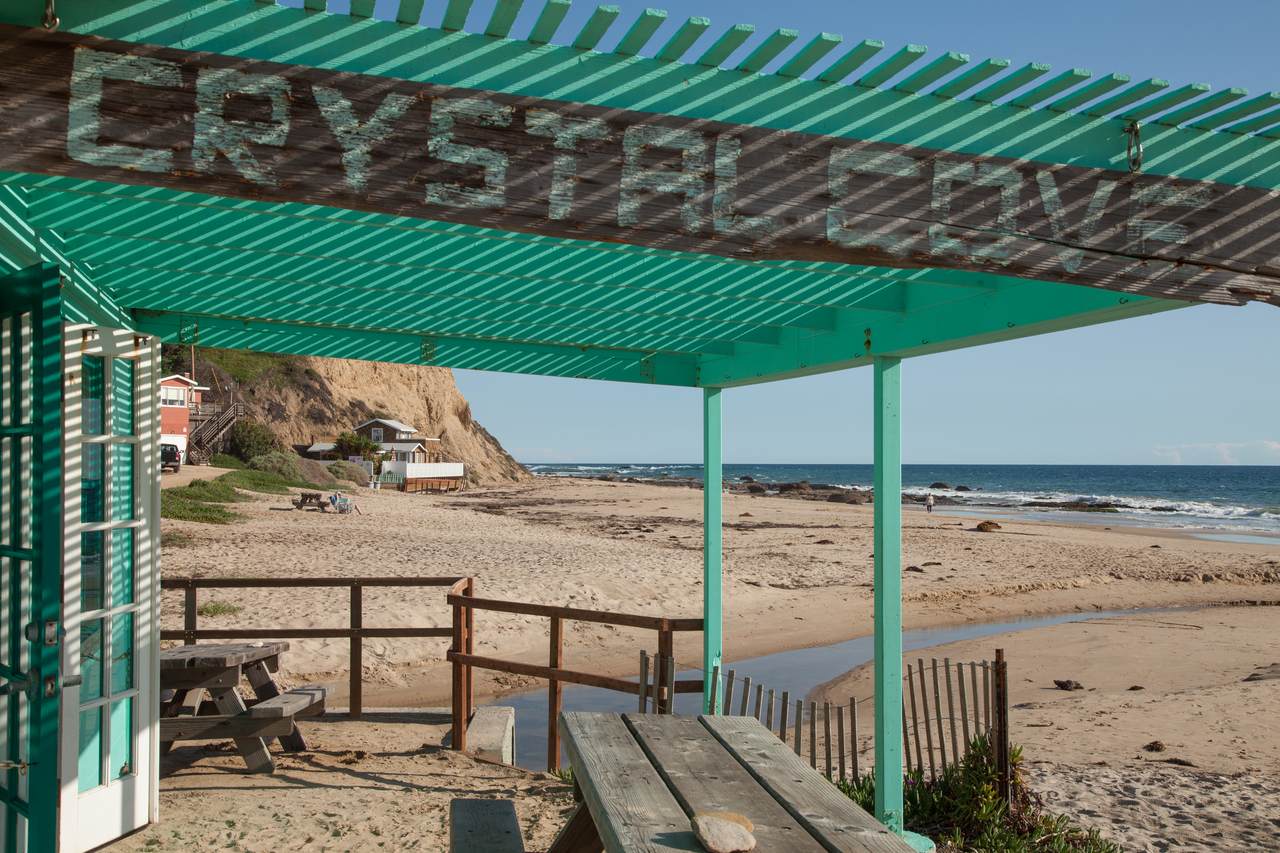 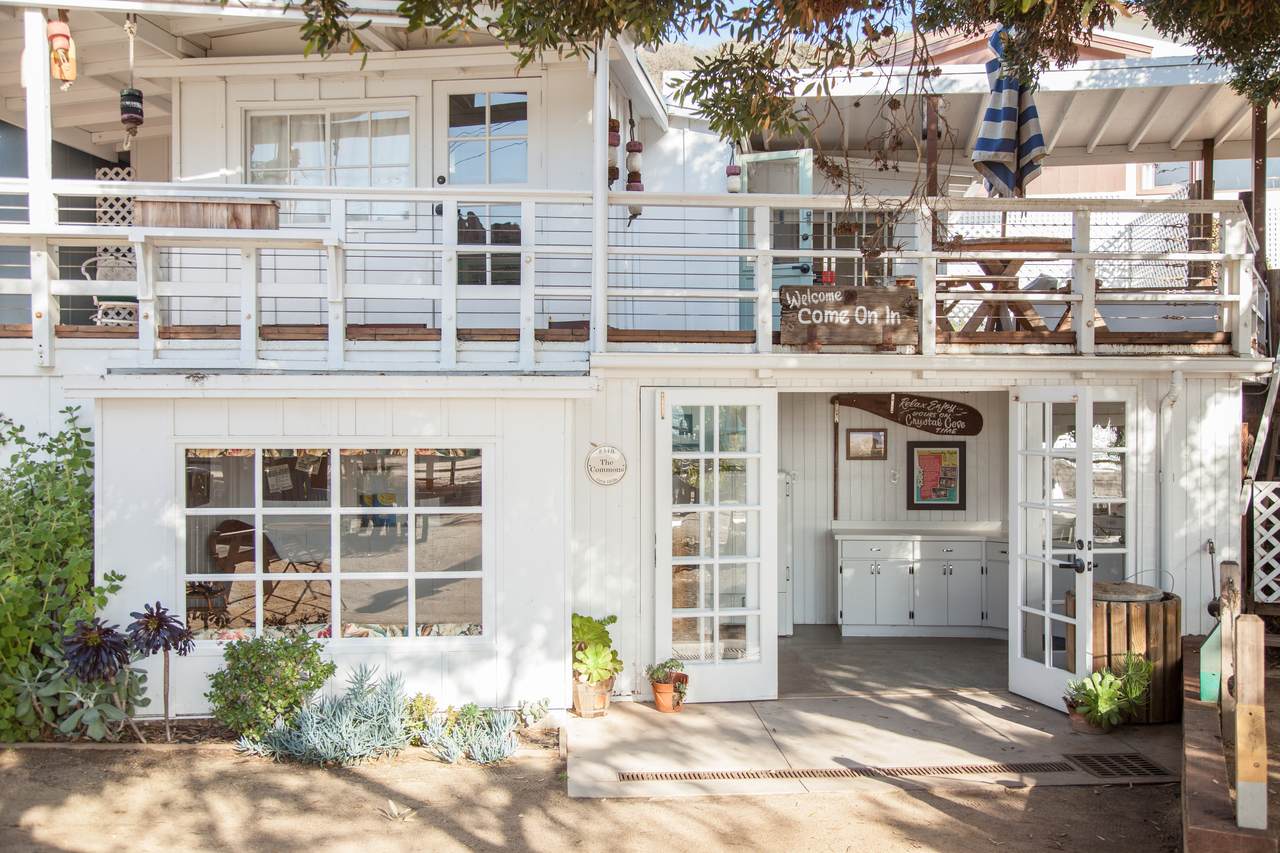 Secondly, the dozens of restored mid-century wooden cottages are hip as rentals and a walk along the beach gives snapshot of how Californian’s used to live. Restoration is ongoing but there are plenty available for rent. It’s inexpensive too starting at $35 a night. But it’s also pretty booked up.

And then there’s the Beachomber cafe.

Crystal cove is also known for its Beachcomber cafe and its totally scrumptious beignets -these puffy treats are similar but lighter than donuts. There’s also a lovely menu of eggs as you like them served with rosemary roasted potatoes, fresh fruit or cottage cheese. 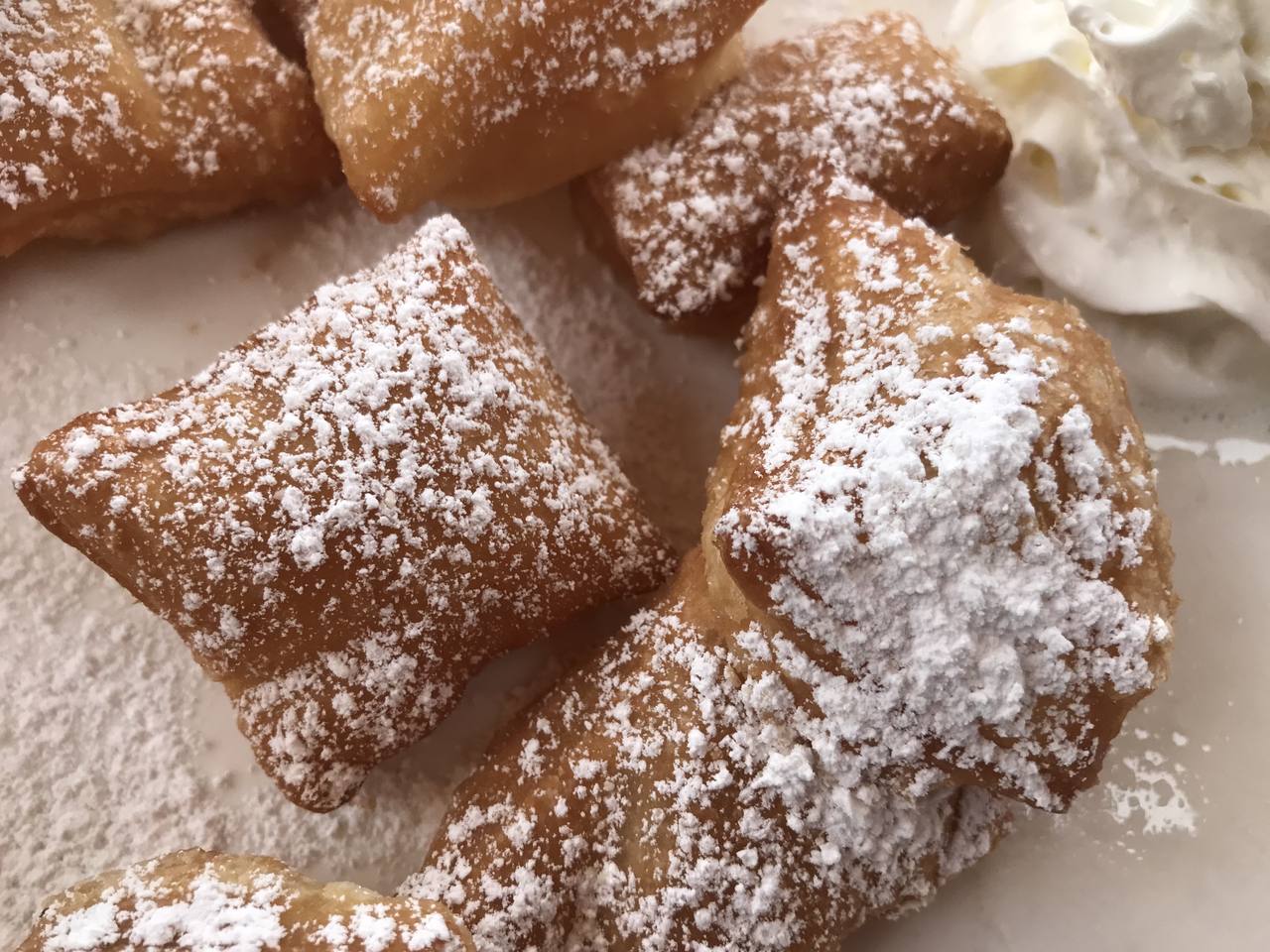 I was delighted to be offered a Mamosa which is champagne with a touch of orange juice and happily, the lattes are served in extra wide cups. This is such a lovely experience, I would have liked to return for dinner to watch the sunset while nibbling on their seafood.

If you don’t mind blowing the budget, the Fig and Olive in the Fashion Island is a stylish option. Front doors open up to a the sprawling creamy-hued 12,000 sqft space with wood floors and high wood beamed ceilings. It’s open-plan with several areas including an al fresco option on the patio, each with their own ambience but all dotted with olive trees. There’s an impressive wall entirely filled with olive oils – there must be a hundred or so from several European countries. It evokes a Mediterranean resort style atmosphere. I go there a tad early and took up residence on a red-cushioned stool by the marble-topped bar to sup a cocktail first. 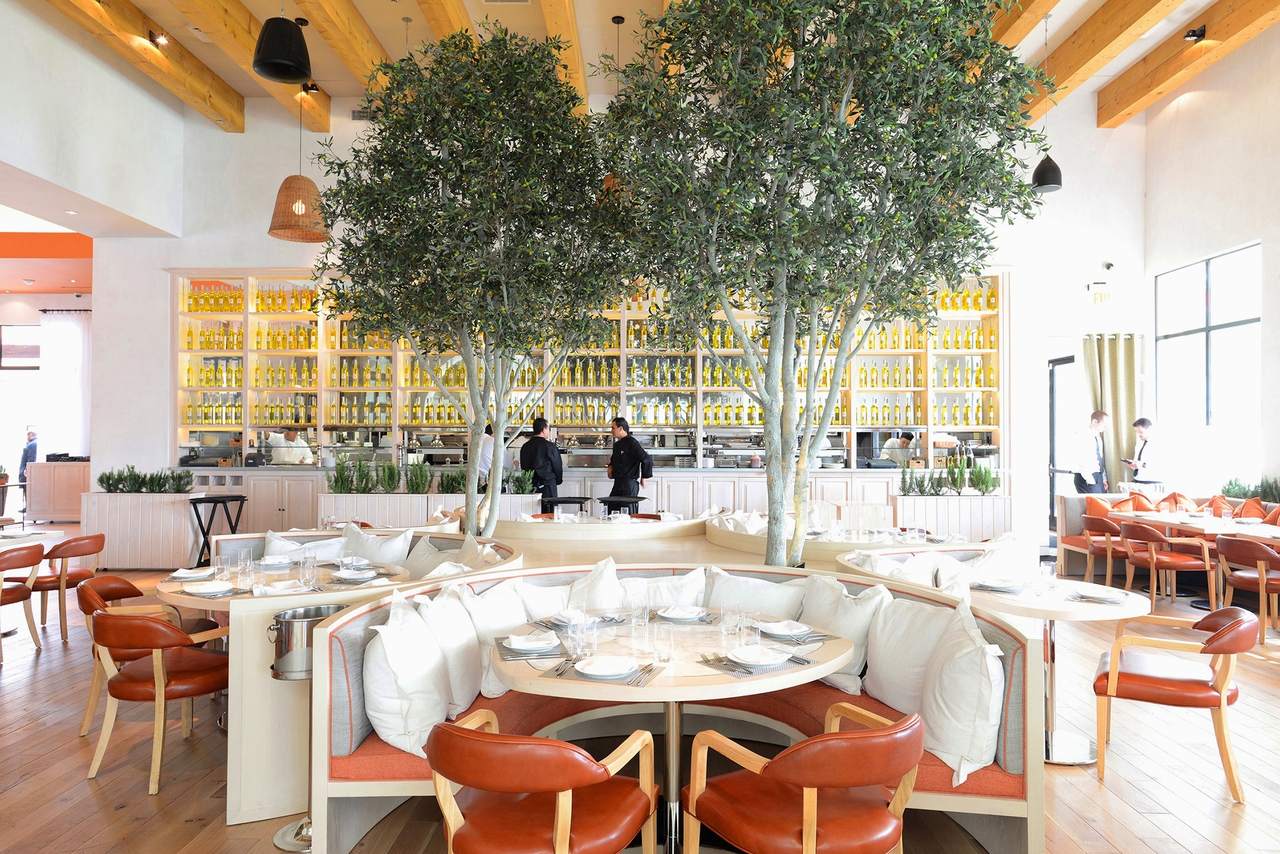 Fig and Olive Orchard Room with a wall of olive oils

We started with Beef Carpaccio and the Fig Gorgonzola Tartlet alongside an assortment of Crostinis, and mains included a salmon dish and New Zealand Rack of Lamb. Every dish is either cooked or finished off in olive oil. Deserts include a Chocolate Obsession, Cheese Cake and Caramelized Apple Tart. The wine list has 30 wines from Italy, France and Spain and all are offered by the glass.

The Oak Grill restaurant in Fashion Island Hotel offers the American classics in a light and airy restaurant which stretches outside to a plush and lush terrace.

FLY: Several airlines serve LAX aiport. From here you could fly to John Wayne Airport the gateway to Newport Beach. And a 9-foot-tall statue of the Duke will greet you when you arrive.

DRIVE: It’s a 40-minute drive from LAX to Newport. You can rent a car with Rentalcars. An SUV for two weeks from LAX starts from £182, when booked at least a month in advance.