8 things to see and do in Myanmar (Burma)

Myanmar (Burma) is one of the most beautiful and untouched countries in Asia full of old empire opulence, grand pagodas, natural wonders and a predominantly Buddhist population renowned for their friendliness and hospitality eager to share their ancient customs.

To quote Rudyard Kipling “This is Burma and it will be quite unlike any land you know about”. If you’re planning a trip, here’s our pick of the top 8 things to see and do. 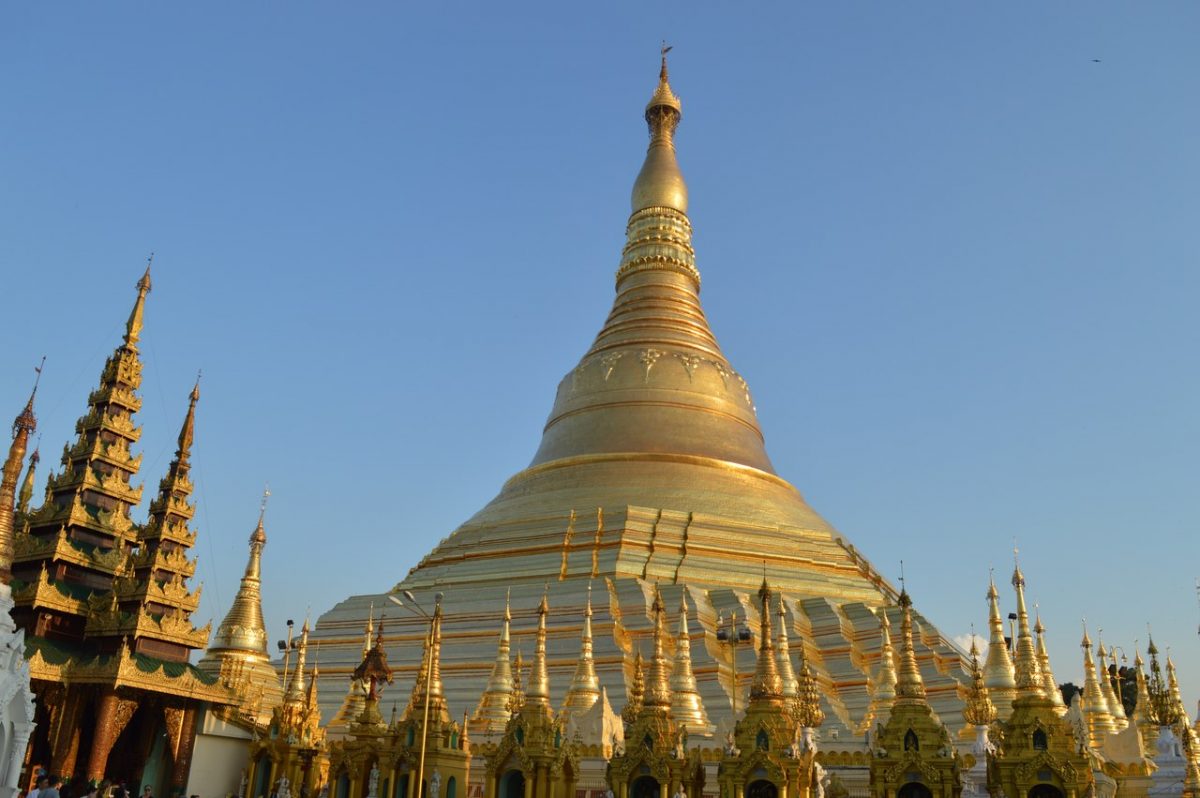 The giant Shewedagon Pagoda is Myanmar’s gold-plated showpiece and the most sacred Buddhist site in the country (Buddha’s hair is said to be buried inside it).

The brilliant, golden pagoda (the oldest in the world) standing close to 110m high and covered in gold leaf and 4,531 diamonds are visible from all over Yangon, with sunset the perfect time to visit.

The stupa glows in warm orange light, the air is heavy with the scent of flowers and incense and the shuffling crowds flow as one around the pagoda. Devotees take part in a lamp-lighting ceremony, where hundreds of oil lamps are lit each evening to bring good luck. 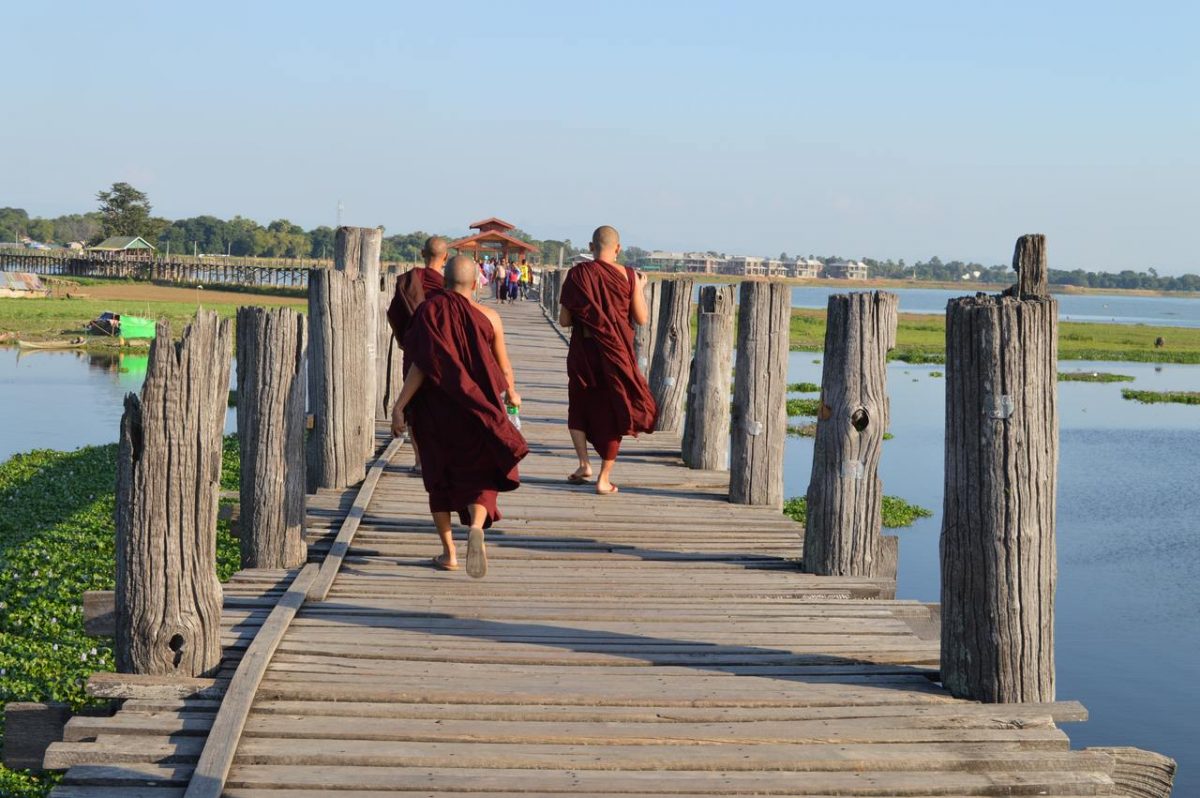 Monks promenading on U Bein Bridge near Mandalay

Mandalay is Myanmar’s second largest city, a cultural hub and home to all things big, from the largest book in the world, the tallest standing Buddha and the longest teak bridge.

The photogenic U Bein teak bridge winds for nearly a mile across a shallow lake and you’ll often catch a sea of red robes swaying past, monks on their late afternoon or early morning promenade.

Other Mandalay highlights include the Shwenandaw Pagoda with walls adorned with exquisite woodcarvings, the Mahu Muni Buddha swamped in gold leaf, and the Kuthodaw Pagoda, home to the world’s largest book.  Also, make time to catch the sunset at Mandalay Hill.

Cruise along the Irradwaddy River 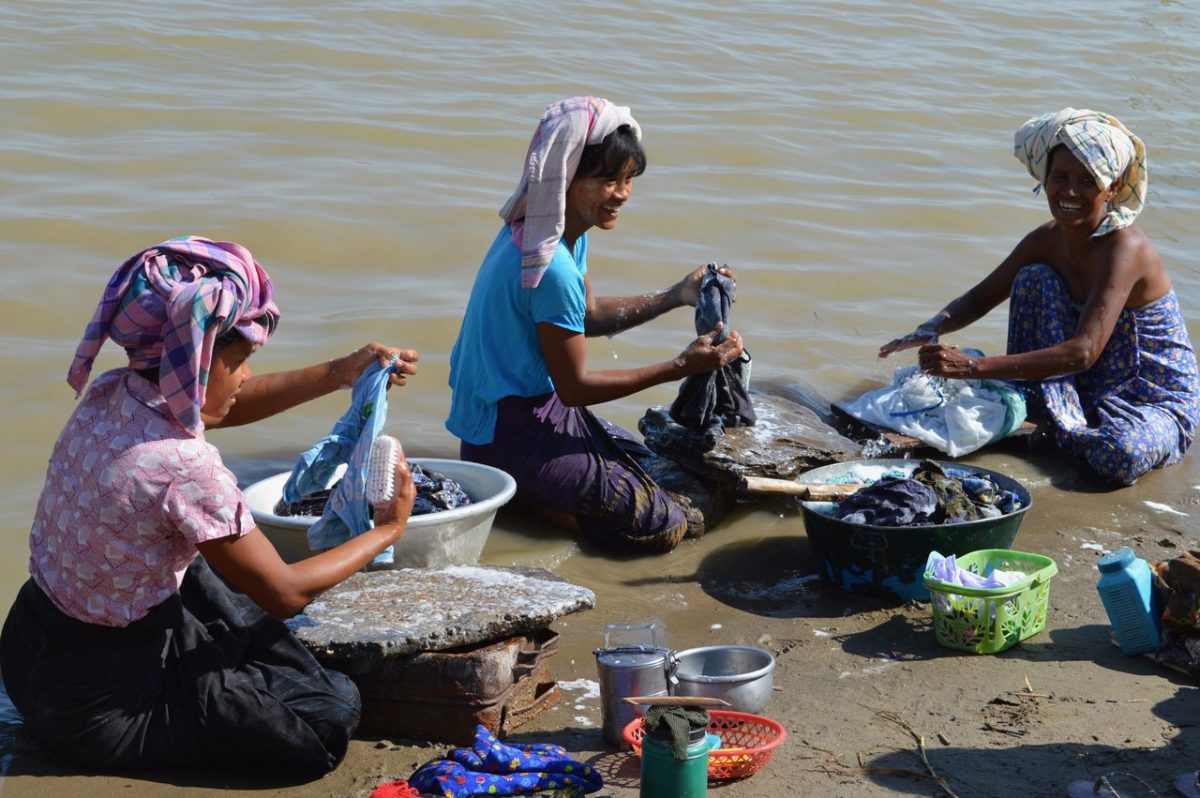 Life on the shores on the Irrawaddy River

Throughout Myanmar’s history, river travel has been an important part of everyday life.  Today is no different, take the slow and scenic route from Mandalay to Bagan, cruising along the Irrawaddy River and can watch local life unfolding along the way.

The 1,300-mile-long Irrawaddy (navigable all the way from Yangon to Bhamo, near the Chinese border) is one of the world’s most fabled rivers, carrying barges and small passenger cruise ships.  Many of the boats have shallow drafts so that they can stop at small landing places (often just a series of slippery mud steps), allowing passengers to walk into villages and remote monasteries.    Local ferries make the journey from Mandalay to Bagan in one day but there are also more comfortable options along the same route with overnight stays and cabins available.

Take a balloon trip over the temples in Bagan

Bagan, located on the east bank of the Irrawaddy River, is home to the largest and densest concentration of Buddhist temples, monuments and ruins in the world, over 2000 in total with many dating from the 11th and 12th centuries. 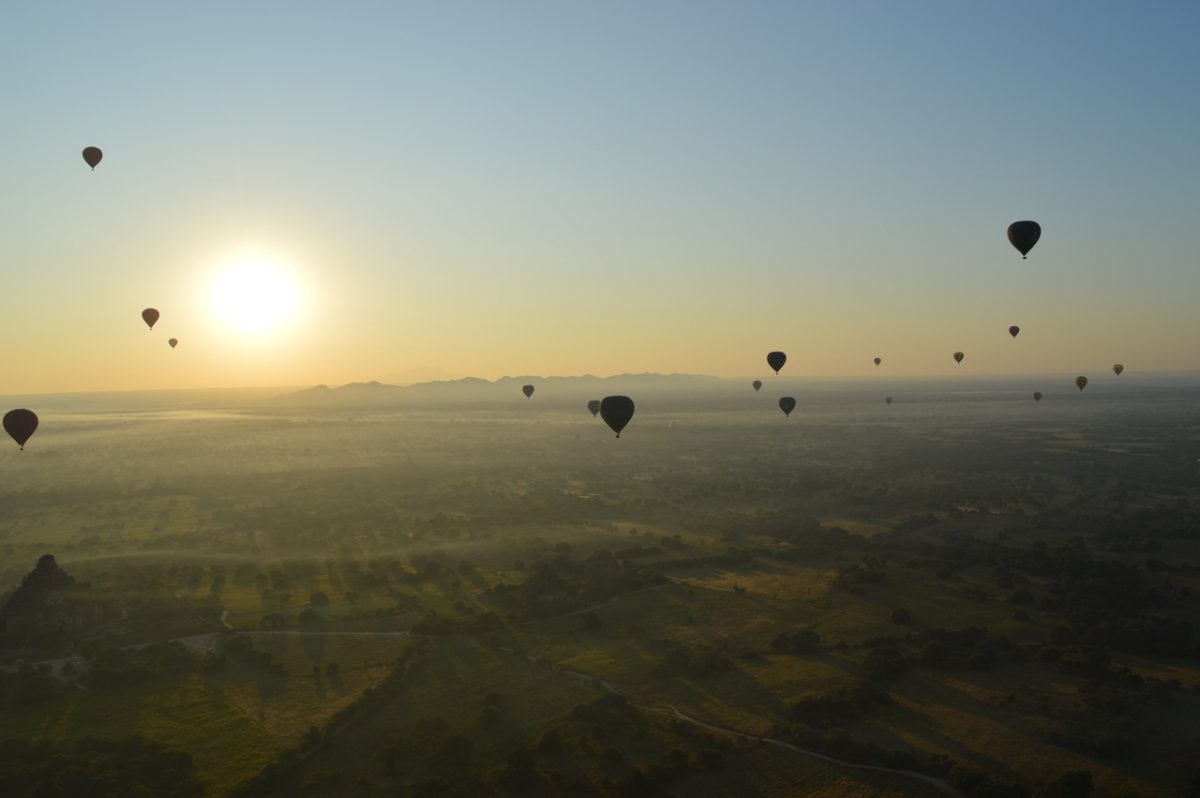 Balloons over Bagan (a long-standing hot air balloon operator) takes passengers in complete safety and comfort high above the region for 45 minutes.  Seeing the thousands of ancient temples spreading across the plains, appearing through the mist as the sun rises is undoubtedly one of Myanmar’s most impressive sites and not to be missed.  The flights only operate in the dry season between October and March.

Allow at least a couple of days to also walk, cycle, take a horse and cart or electric motorbike to explore the temples including the impressive temples of Ananda and  Dhammayangyi, the largest temple Shwezigon and the tallest Thatbyinnyu.

Trek from Kalaw to Inle Lake 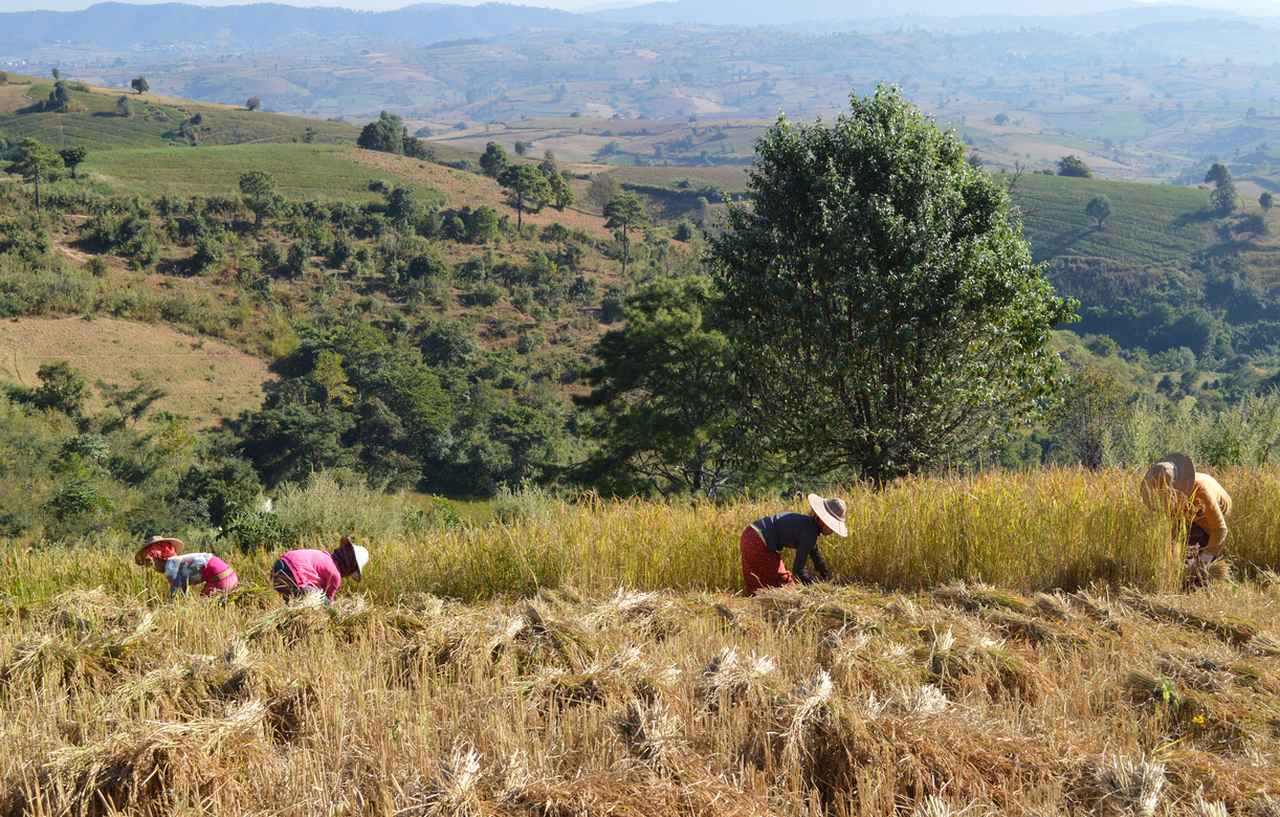 Harvesting rice on the trek from Kalaw to Inle Lake

Located in Myanmar’s northeastern Shan State, Kalaw is an old hill station with a welcome cooler climate. To fully appreciate the charms of rural Myanmar, trek over the rolling hills from Kalaw to nearby Inle Lake.

Accommodation is basic, but the real deal, staying in monasteries, being lulled to sleep by chanting monks whilst during the day watch the farmers planting, tending or harvesting their crops – rice, chillies or corn depending on the season.

The trek, walking for five or six hours a day is more of an interesting agricultural experience, enjoying the bucolic landscape, reminiscent of Tuscany than a challenging hardcore hike. 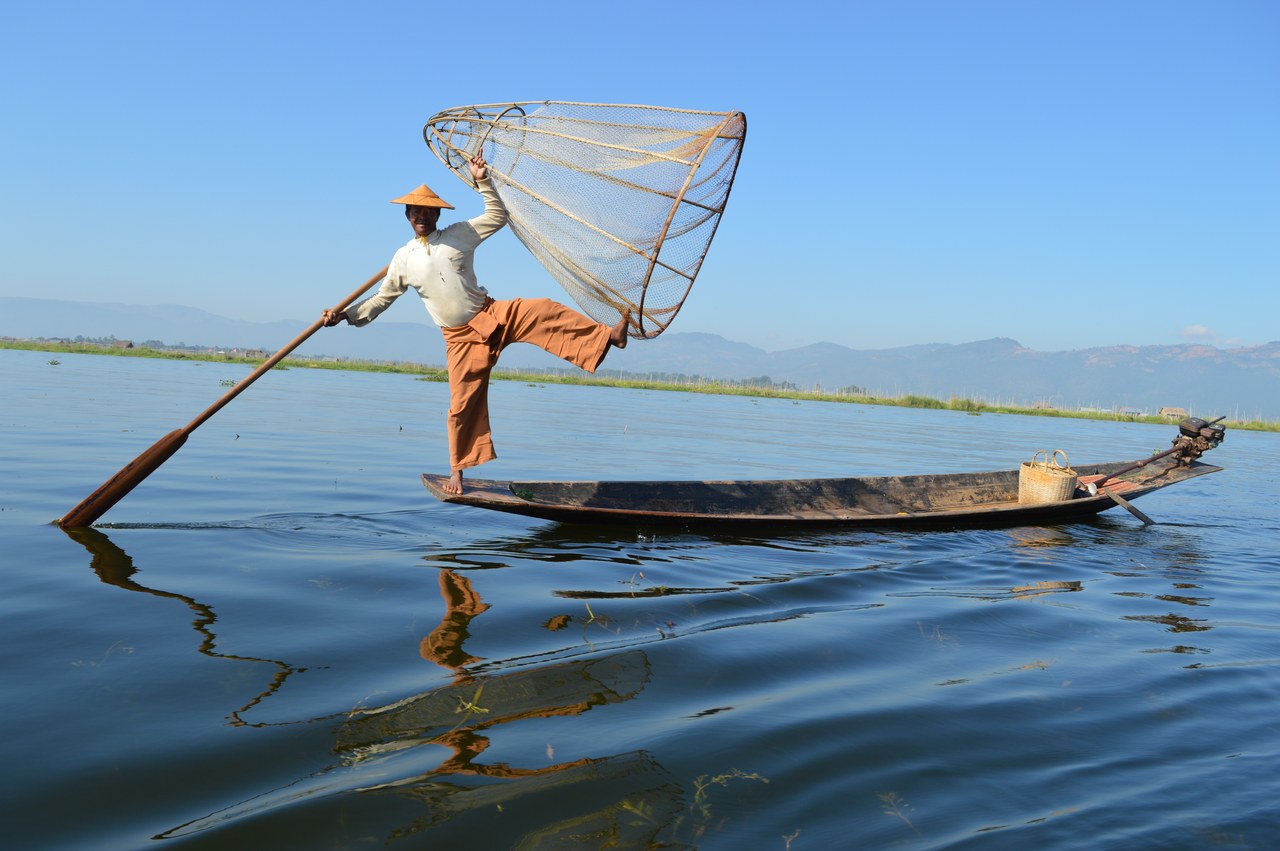 The Intha fisherman with their unusual one-legged rowing technique, hooking a leg around a long oar to scull across glassy blue Inle Lake is perhaps Myanmar’s most iconic image and used to sell the country worldwide. The best way to explore the lily dappled shallow waters of Inle Lake is on a day trip, slicing through the waters on a long-tailed boat.  Tours include visits to fishing villages with their houses built on stilts and silk weaving and cheroot rolling industries.   Stops are also made to watch blacksmiths and silversmiths at work and to see the floating market that moves between the area’s villages on a five-day rota.

Get off the beaten track and visit a Kayan tribe village 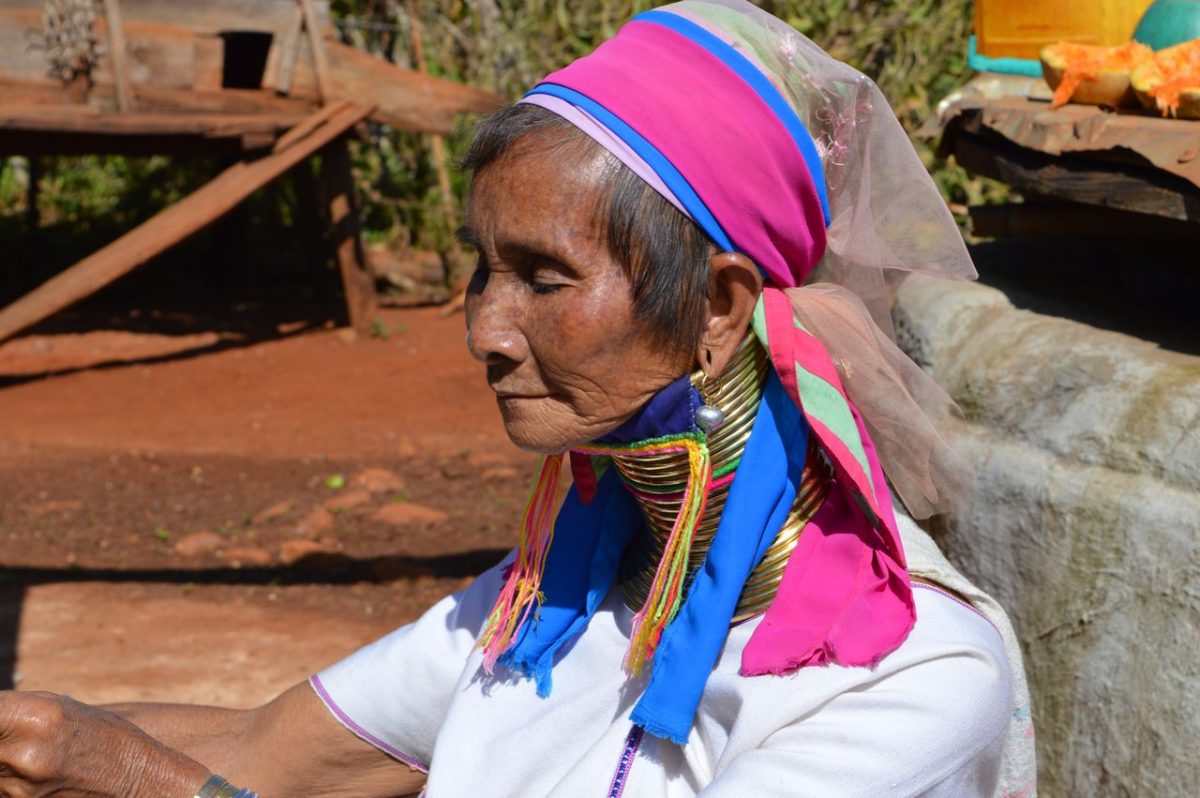 Closed for over half a century and only recently opened to visitors, Kayah state is home to nine distinct ethnic groups, which diversified and evolved from Karen culture.

The biggest groups are the Kayah, Kayan, Bre, Lahta, and Yinbaw. Many tribes still practice their indigenous customs, handed down for centuries and dress in their traditional costumes including wearing heavy brass neck rings. The sleepy capital Loikaw is also worth exploring.

Enjoy a spot of R&R on Ngapala Beach 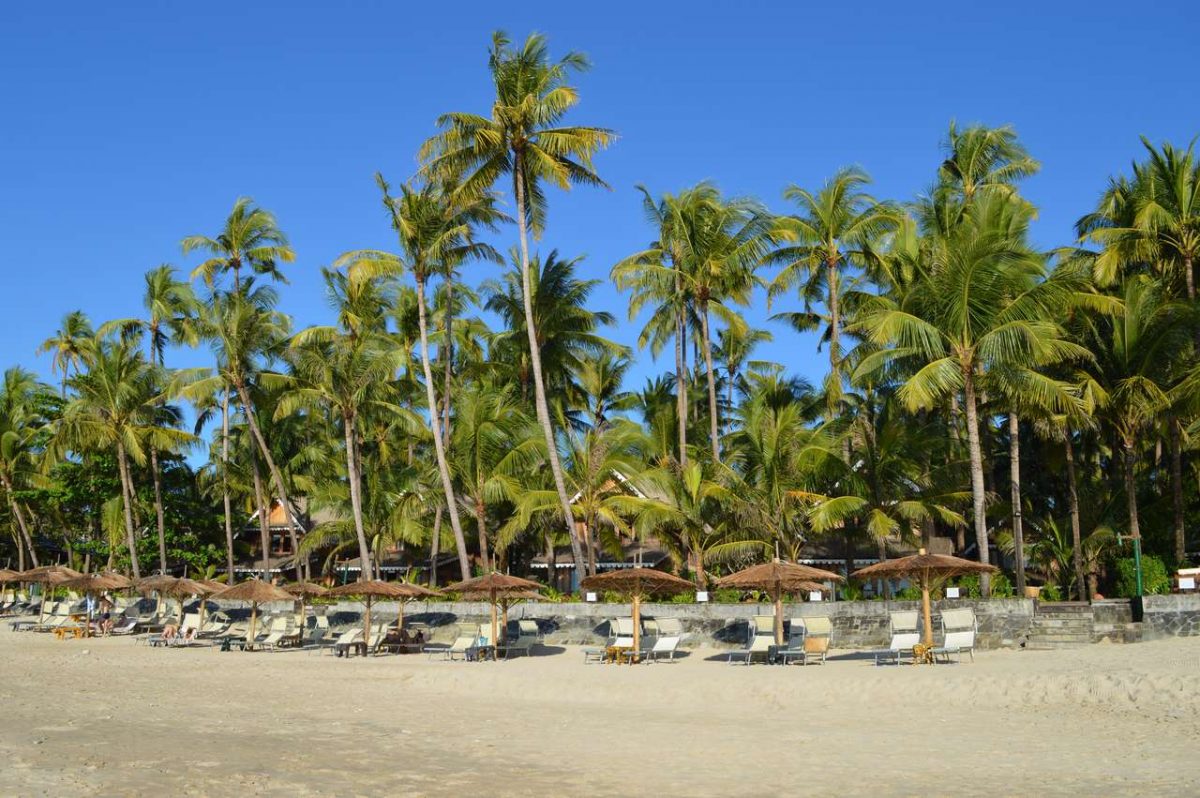 After touring Myanmar’s main sites, laid back Ngapali Beach is the place to relax and enjoy a spectacular sunset from a practically empty palm-fringed golden sand beach, untroubled by touts.  Unlike some resorts in neighbouring Thailand, Ngapali is still relatively unspoilt with just a small number of beachfront hotels.

Ngapali, supposedly named years ago by a homesick Italian reminiscing about Napoli, is a place to unwind, enjoy the balmy blue waters of the Bay of Bengal, take a boat trip for a spot of snorkelling and visit the traditional fishing villages that line the coast.

There are no direct flights from London to Yangon. Petra Shepherd flew with Thai via a quick transfer in Bangkok which is the best option.  Emirate also fly via Dubai and other Asian Airlines, Cathay Pacific via Hong Kong, Malaysia via Kuala Lumpur.
0 comment
0
FacebookTwitterPinterestEmail

Q&A: Do I have to wear a face mask next time I fly?