“Hit the Road Jack”, in the words of Ray Charles, and discover the places where Otis Redding, Little Richard, The Allman Brothers and many other Georgian musicians started out.

I arrive in Atlanta by plane, not quite on the Midnight Train to Georgia, although Gladys Knight who had a hit with the song in 1973 was born here. 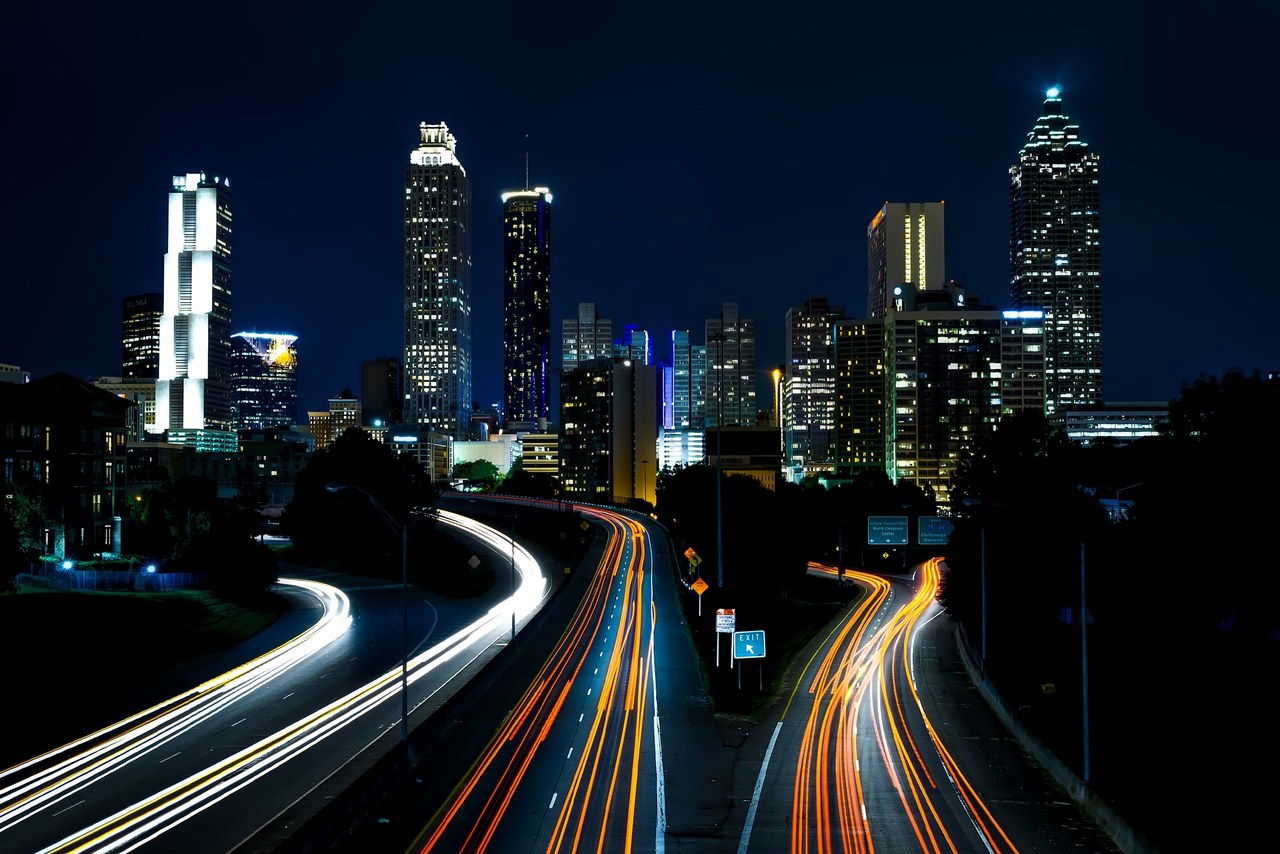 I have a pressing appointment in Macon, around 90 miles to the south, another musical city and birthplace of both Otis Redding and Little Richard.

It’s also the home of Capricorn Records, responsible for Southern rock with bands like the Allman Brothers and the Marshall Tucker Band. The studios where they recorded is about to reopen on their 50 anniversary.

There’s a life-sized statue of Otis Redding in Gateway Park, on the banks of the Ocmulgee River, where a steady stream of his hits plays continuously. He was tragically killed in a plane crash in 1967 but his widow Zelma still lives in the ranch he built just outside town. She set up the Otis Redding Foundation which has a small museum on Cotton Avenue. You’ll find her working here most days as the Foundation also runs a music school for local kids.

I get to hear some of them when their group, The Dream Team, kicks off the Capricorn Sound Studios opening ceremony. It was Otis, his former manager Phil Walden, and his brother Alan, who bought the building in 1967 to set up what became Capricorn Records but it’s been derelict since the 1980’s when the record company collapsed.

Now, in a partnership with local Mercer University, it’s been comprehensively refurbished and retitled Mercer Music at Capricorn. As well as state of the art studios and rehearsal rooms, they’ve kept the famous Studio A where groups like the Allman Brothers, the Marshall Tucker Band, the Charlie Daniels Band and Wet Willie recorded. They’re second up in the celebrations with their lead singer, Jimmy Hall sounding as good as ever. 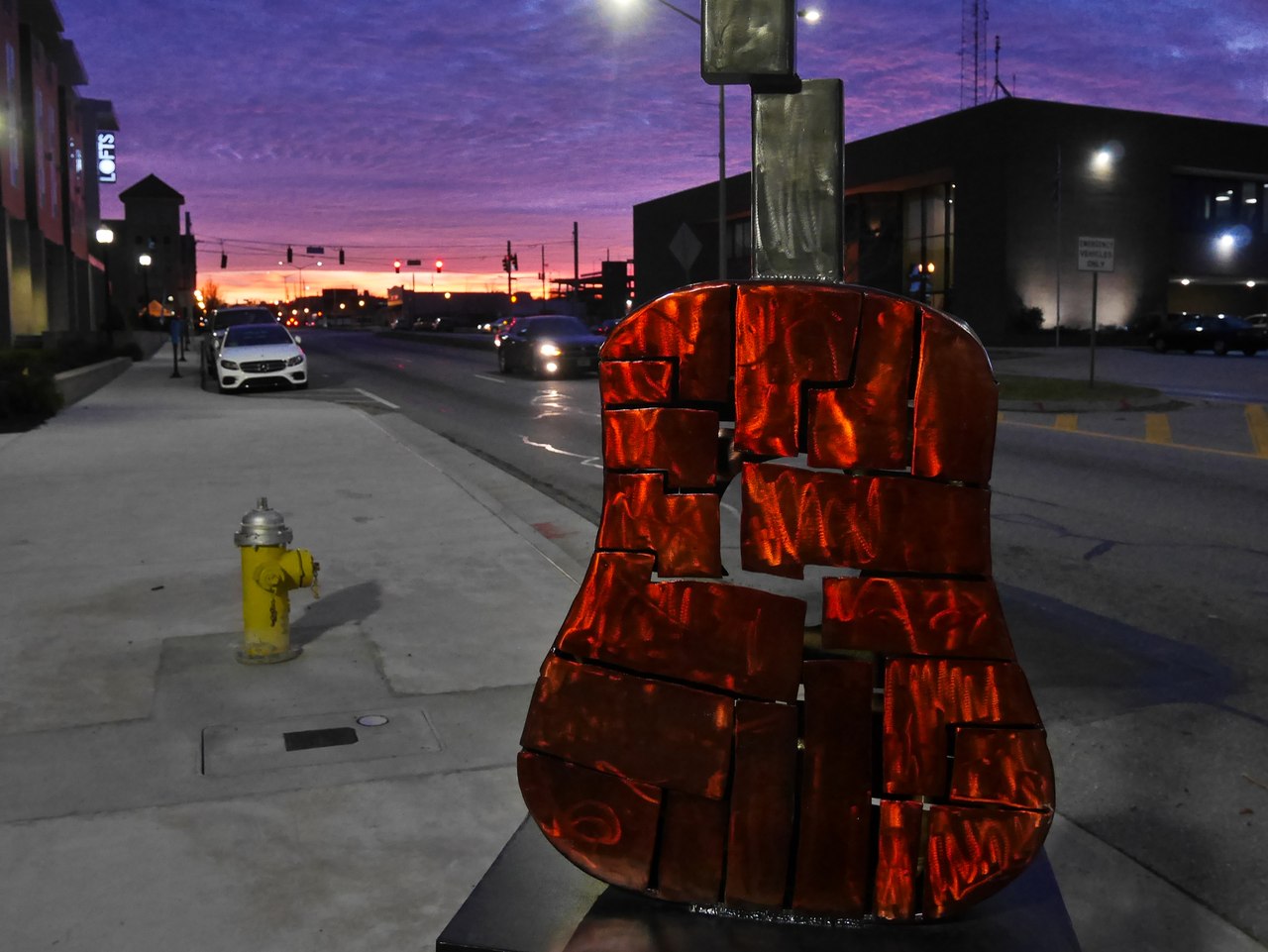 Art outside the studio 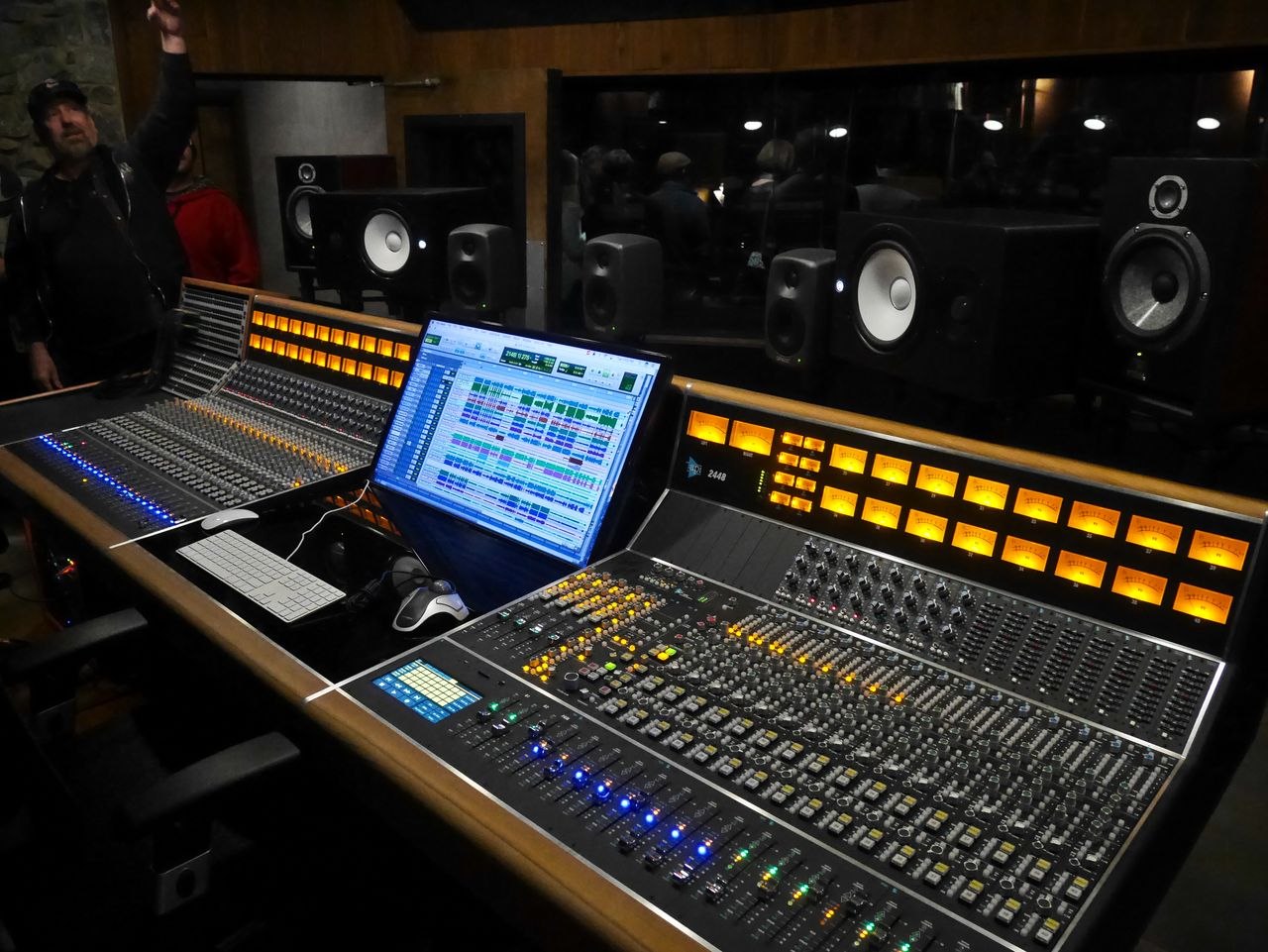 In the evening there’s one of those mammoth tribute concerts at the City Auditorium which includes many of the artists from Capricorn’s past who are still around.

The Allman Brothers are represented by original drummer and percussionist, Jaimoe, and Dickey Bett’s son, Duane, as well as the son of bassist Berry Oakley. Blues musician Taj Mahal does a couple of numbers and Bonnie Bramlett, of Delaney and Bonnie, is in fine voice.

If you’re interested in music history then you can follow the Macon Music Trail around town, As well as Capricorn Studios and the Otis Redding Museum, one of the highlights is the Allman Brothers Big House. 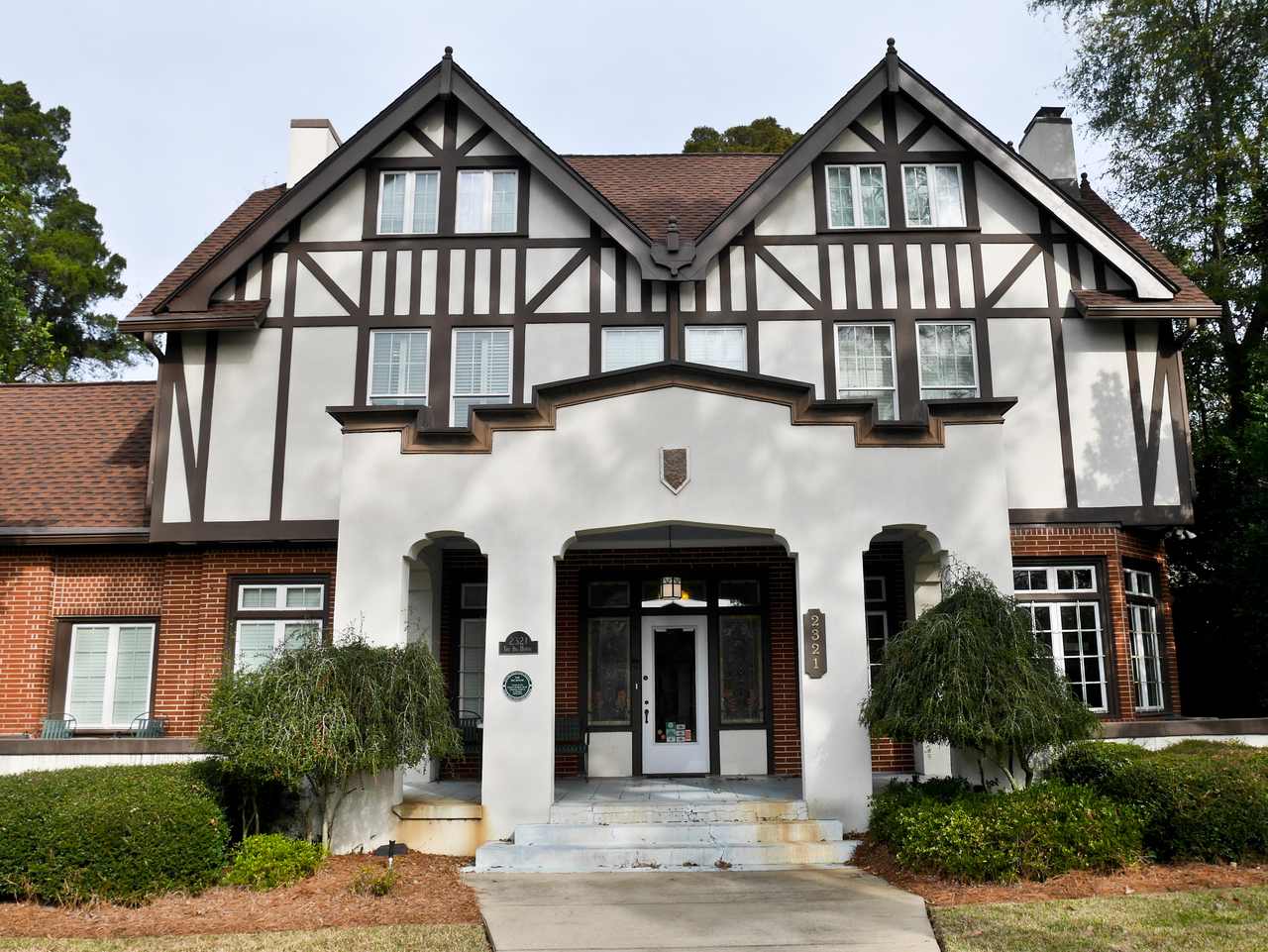 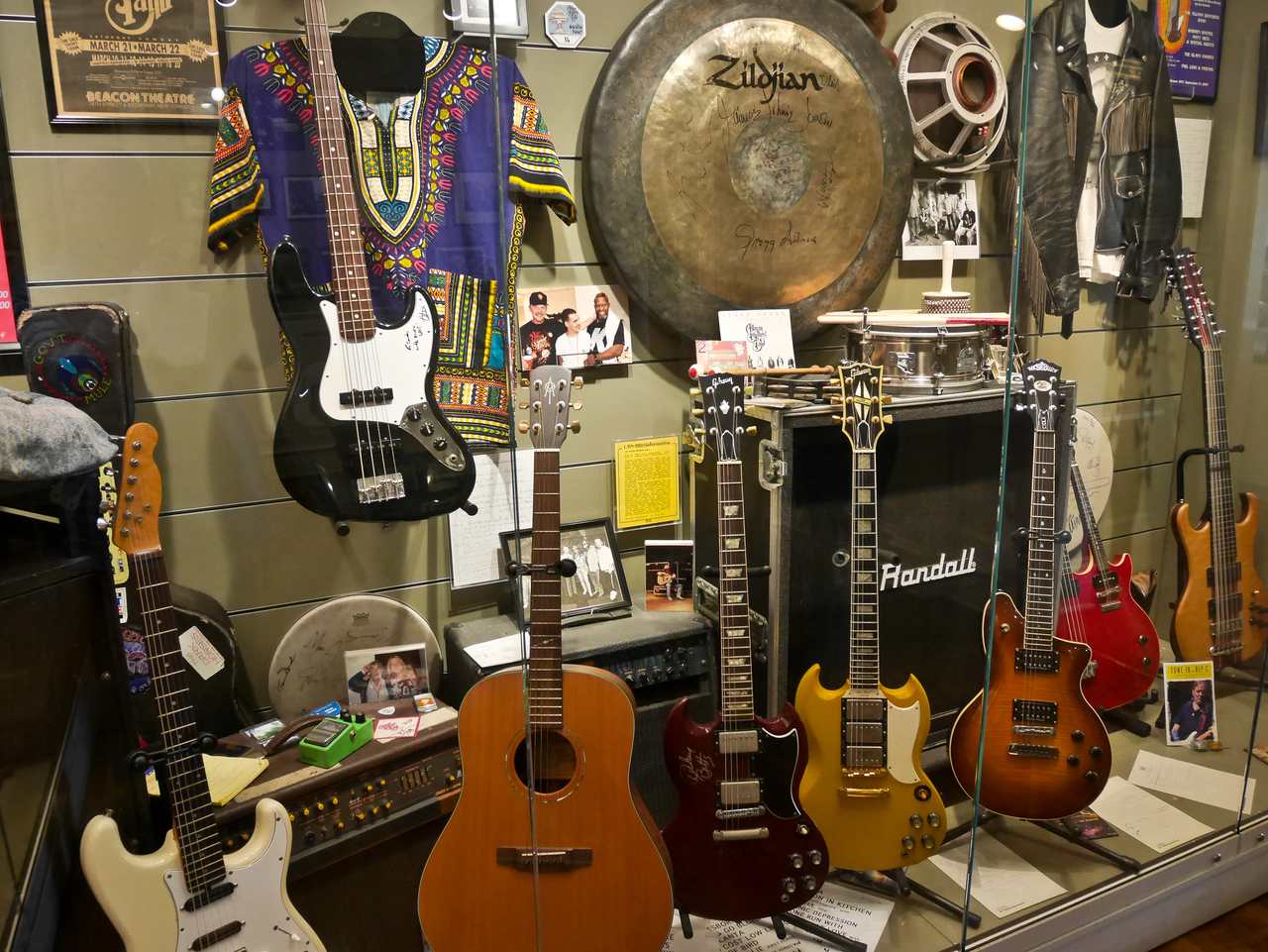 It’s a grand three-storey 1900 mansion where the band and hangers-on lived from 1969 to 1973. It’s been taken back in time and stuffed full of memorabilia. Each room tells a different story and it’s a fascinating glimpse into their lifestyle.

Another famous Macon son is Little Richard and the small shotgun house where he grew up with 11 siblings has been preserved. It was about to be demolished to make way for freeway expansion but was moved a mile to its present location. It’s now a community resource centre and, although there are no original artefacts, there are memorable B&W pictures of Little Richard on the walls. They’re still waiting for him to visit.

In the north of the state, 70 miles east of Atlanta is the university town of Athens, famous as for nurturing early new wave and alternative rock in the late 1970s. Bands like R.E.M. and the B52’s developed in a derelict downtown where struggling musicians could rehearse and play. The most celebrated is the 40 Watt Club, still going strong after all these years, but there are also a handful of other clubs downtown presenting music of all kinds.

The Athens Music History Walking Tour is a comprehensive introduction to the music scene and includes visits to record stores, bars and sites of original venues. It also takes you to the old railroad trestle bridge that was featured on the back cover of R.E.M.’s 1983 debut album Murmur. There are also revolving exhibitions of music memorabilia at the University’s Richard B. Russell Building Special Collections Libraries.

I hit the road and set south and east to Savannah but on the way pay homage to Blind Willie McTell, the famous blues guitarist who had many hits in the ’20s and ’30s. He’s from the tiny village of Thomson, right in the heart of the Bible belt, and as I get closer there are wooden churches every half mile. Jones Grove Baptist Church is where he’s buried and there’s a picture of his 12 string guitar on the headstone.

I take a picture and, as I’m about to get back into my car I get talking to two old black men, setting up the church. I tell them I’m here to see the grave and surprisingly they remember him, even though he died in 1959.  They never heard him play but they knew he was famous because he was the only person in town who paid for a train ticket, rather than hopping the freights for free. 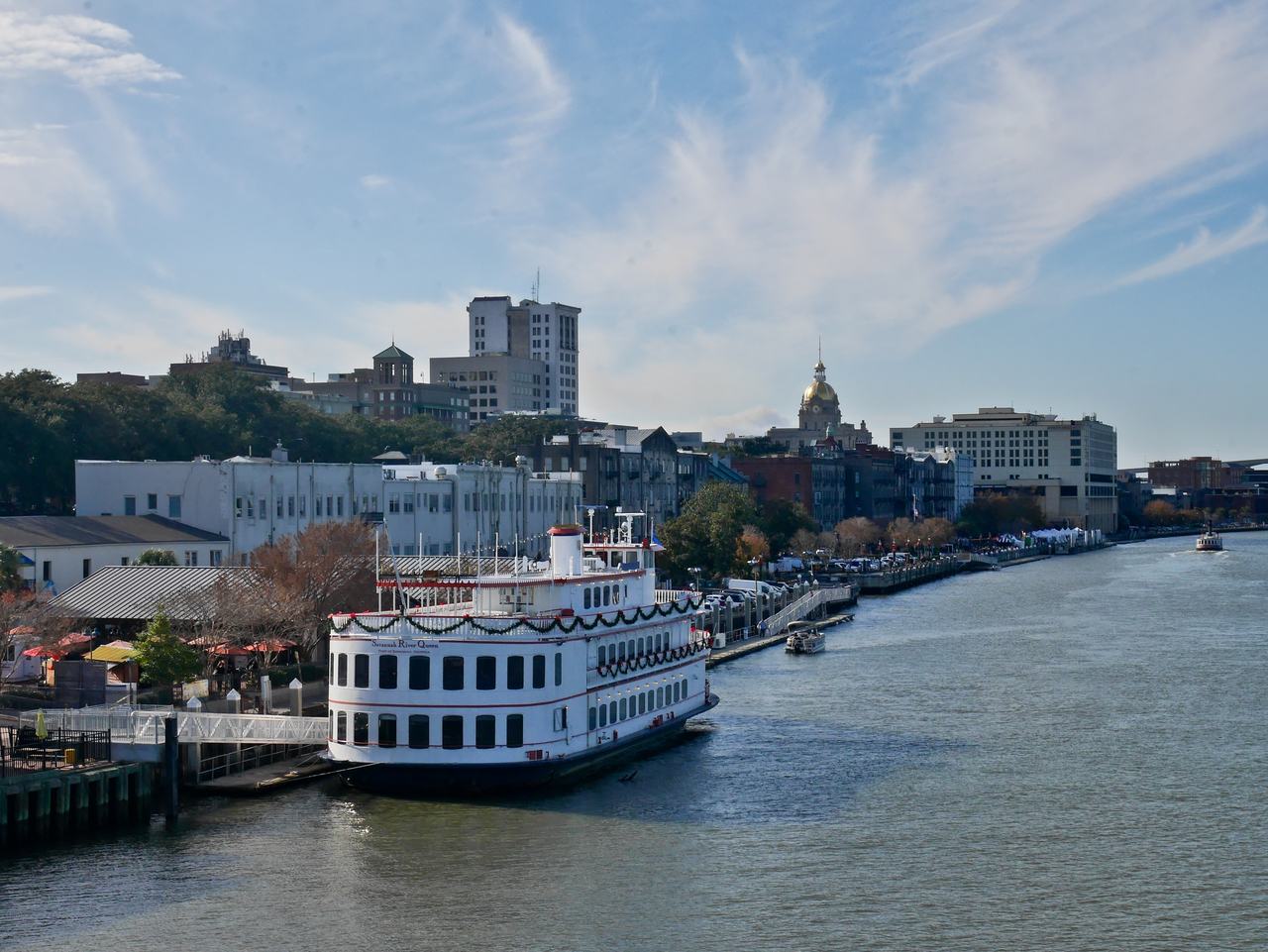 Georgia was founded by British soldier James Oglethorpe in 1733 and Savannah was the first settlement. The idea was to act as a buffer between the rich British colony of Virginia to the north and the Spanish colony of Florida. Oglethorpe named the state after his patron George II and he laid his city out in a grid pattern, arranged around 25 squares, 22 of which still survive.

They’re lined with historic mansions, built by plantation owners before the civil war. The cobbled streets by the river are crammed with bars and restaurants and a paddle boat ride gives you an idea of what those early settlers must have felt when they arrived. Johnny Mercer, the songwriter, came from here and it’s easy to see where the inspiration for his famous song Moon River came from. 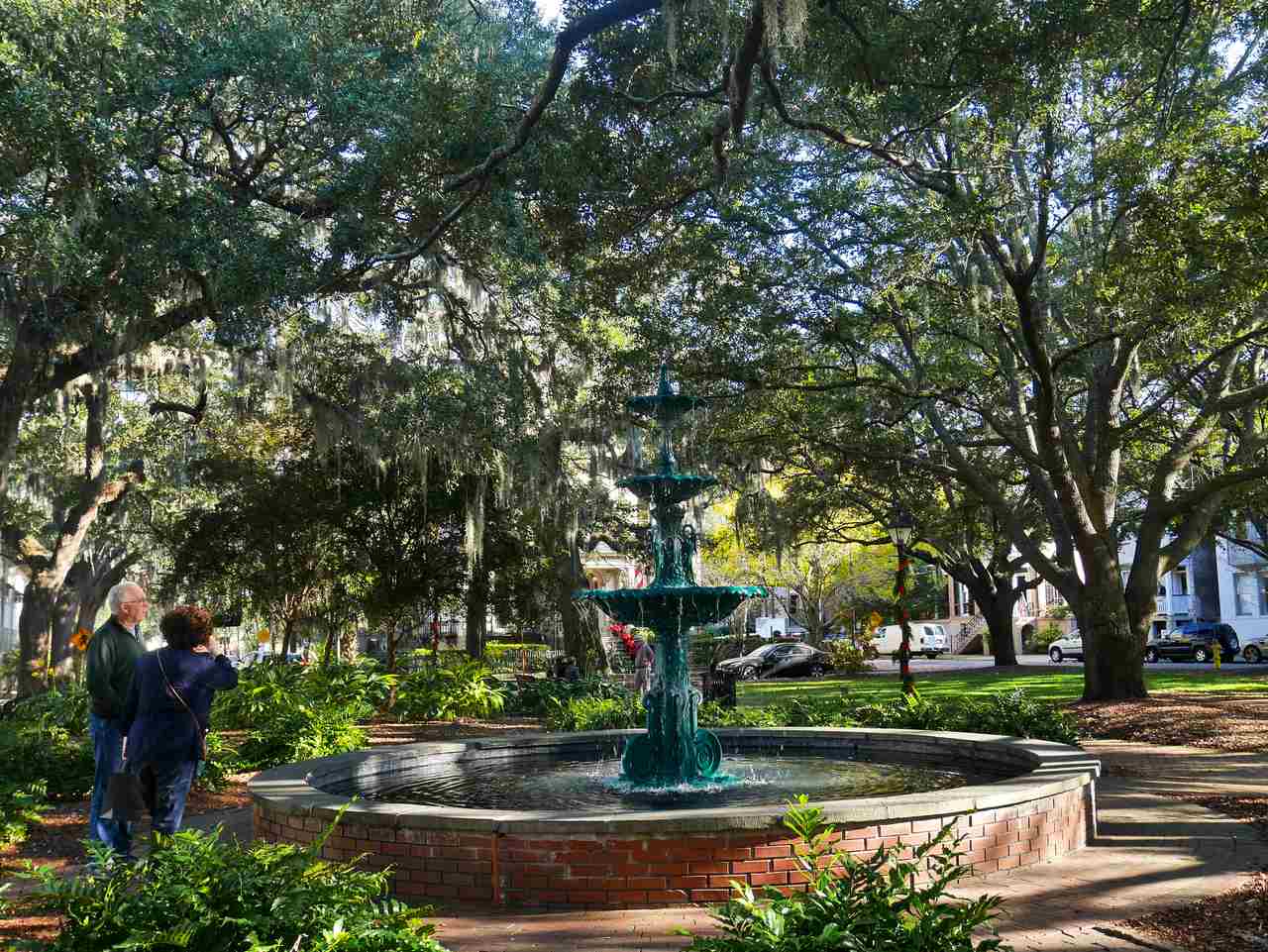 Although you don’t get Breakfast at Tiffany’s, a First Squares food tour is a good way to mix history and local cooking. It visits the historic Squares and makes enticing food stops along the way. Tasting locations include the flavours of the Georgia coast, an award-winning honey store, and a traditional Scottish restaurant highlighting dishes consumed by some of Savannah’s earliest settlers.

STAY: The Aloft Atlanta Downtown makes a comfortable base.


EAT: The Atlanta Breakfast Club is a stylish diner.

MORE: Atlanta has information about the city.

STAY: The Hilton Garden Inn Macon is in a quiet location near Mercer University.


EAT: Dovetail offers southern fine dining.
H&H Soul Food served the Allman Brothers and many of the other Capricorn bands.

TOUR: The Macon Music Trail is a comprehensive guide to the music.

MORE: Visit Macon has information about the city.

MORE: Visit Athens has information about the city.

STAY: The DeSoto makes for a stylish base downtown.

MORE: Visit Savannah has information about the city.