There was a time trams were a familiar sight on Britain’s streets. From Dover and Brighton to London, Birmingham, and many northern cities including north of the border, such as Edinburgh, these “iron horses” clanked along offering a rather uncomfortable means of getting around.

One by one the tram routes disappeared. Some in the 1930’s and London’s in the early 1950’s.  Not because of pollution but usually because of noise, “clank clank”, and largely as a result of new technologies coming along such as modern petrol buses which proved so much quieter, more comfortable and more popular.

Pollution is very much a keyword. But so too is congestion so we find growing pressures for tramways to be reinstated. Back in the late 1980’s commuters in Croydon, west of London, were using tramways. So Manchester followed in April, 1992 with the Bury Interchange and Victoria route which then became Britain’s first modern street-running system.

Blackpool’s famous seafront tramway continued to operate and proved an ideal way to see the famous autumn illuminations. Many trams were decorated with illuminations of their own, adding to the appeal for visitors to visit this famous North West seaside mecca.

These trams were old and continued to provide that endearing “clank, clank” as they trundled along the old seafront tramway. They were also expensive to maintain.

So Blackpool now has a fleet of modern, German (Bombardier) trams introduced just a few years ago with an upgraded track from Starr Gate in the South to Fleetwood (11.5 miles to the north).

These trams are classed as a “light railway” and attract thousands every day. At bank holidays, summer holidays, and for the autumn Illuminations, the original “Heritage” trams are rolled out. These vintage trams – one is over 100 years old and many are in their “80’s” –  are maintained by a small team of six engineers working for the Blackpool Heritage Tram Tours. Some of the trams are sponsored by local companies such as Fishermans Friend and Harry Ramsdens Fish and Chips.

Visitors flock to Blackpool from all over Europe and America to take a ride on the famous trams. Queues form at the special kiosk to buy a ticket for £3.00 Heritage tram ride. Special sponsored evenings and holiday weeks see many of them trundle out of the original tram garage crammed full of enthusiasts. Sometimes you even get fish and chips, a drink and a 90-minute Heritage tram ride all for £11.00.

So nowhere else in the UK can you still ride a heritage tram on the line for which it was originally built and providing a unique experience. Some trams are open and are known as “boats”, some of the original double deckers have an open top and provide a special view of Blackpool’s Pleasure Beach, arcades, bingo and fish and chip shops. And of course not forgetting the famous Blackpool “Tower”. Even wedding parties are staged on these old iron workhorses.

All the Heritage trams are operated by a team of volunteers, many of whom are former drivers and conductors.

But now Edinburgh has realised the value of reducing noise and congestion by recently introducing a modern tramway 8.7 miles in length extending from York Place (east of Waverley) out to Edinburgh Airport with a total of 15 stations. 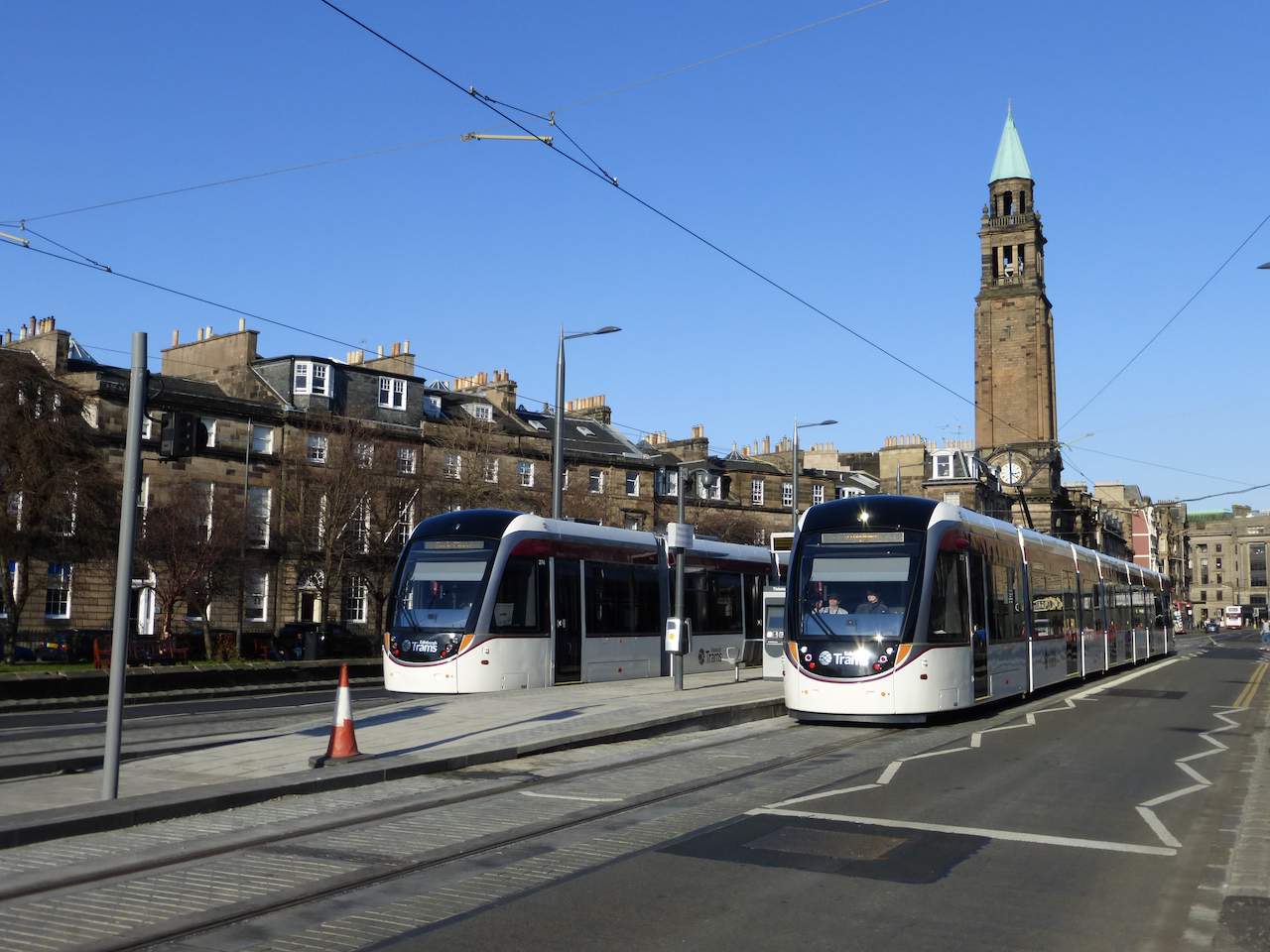 The original Edinburgh tramway ran from 1871 until November 1956 but in the 1990’s proposals were put forward to create a new, modern tramway. By completion – and many false starts on the way – the final system is reckoned to have cost a staggering £521 million. But is already carrying 4.9 million passengers annually.

Edinburgh’s tramway uses a combination of segregated off-road track and street-running and cobbles were used in some places – much to the consternation of cyclists – to identify the area of the tramway.

Across Europe trams are a familiar sight in countries such as Germany, The Netherlands and Switzerland. But now that British cities are realising the full potential of the trams in reducing city centre congestion and pollution, it is both locals and tourists who are flocking to take advantage of modern, quiet “iron horses” to get around and see the sights.

So “hold tight please, mind the doors” and sit back and watch the expansion of tramways in existing cities and new towns currently being planned throughout the UK.

Paul Youden began his career in journalism at the Kent Messenger and attended journalism college for four years. Once qualified, he became a senior journalist with the Kentish Express, rising to County News Editor. He then worked for BBC Radio (South East) and was headhunted by the Port of Dover, where he was in charge of press, PR and marketing. He remained there for twenty years, rising to Corporate Affairs Manager, but took early retirement in the 1990s to return to full-time writing, producing travel books on motoring and skiing, after which he set up his own travel website. With his wife's terminal illness, he had to give up many of his travels and cut back on his writing, but in 2014 attempted his first novel The Powder Man. He is currently working on the sequel.