Every now and then life pulls the rug from under your feet and leaves you lying on your back – this sibling-esque prank is often referred to as a ‘reality check’. Dangling off the side of Merapi with one hand on a fern root and the other on the arm of Khalid was my mine. I had taken too lightly to climbing the most active volcano in Southeast Asia, and when the path I was walking on suddenly gave way, it turned out to be a mentally draining, yet emotionally rewarding challenge.

Known to locals as Fire Mountain, Gunung Merapi sits on the border between Central Java and Yogyakarta in Indonesia. There have been regular eruptions since 1548, with the most recent in 2010 where 30 people died. 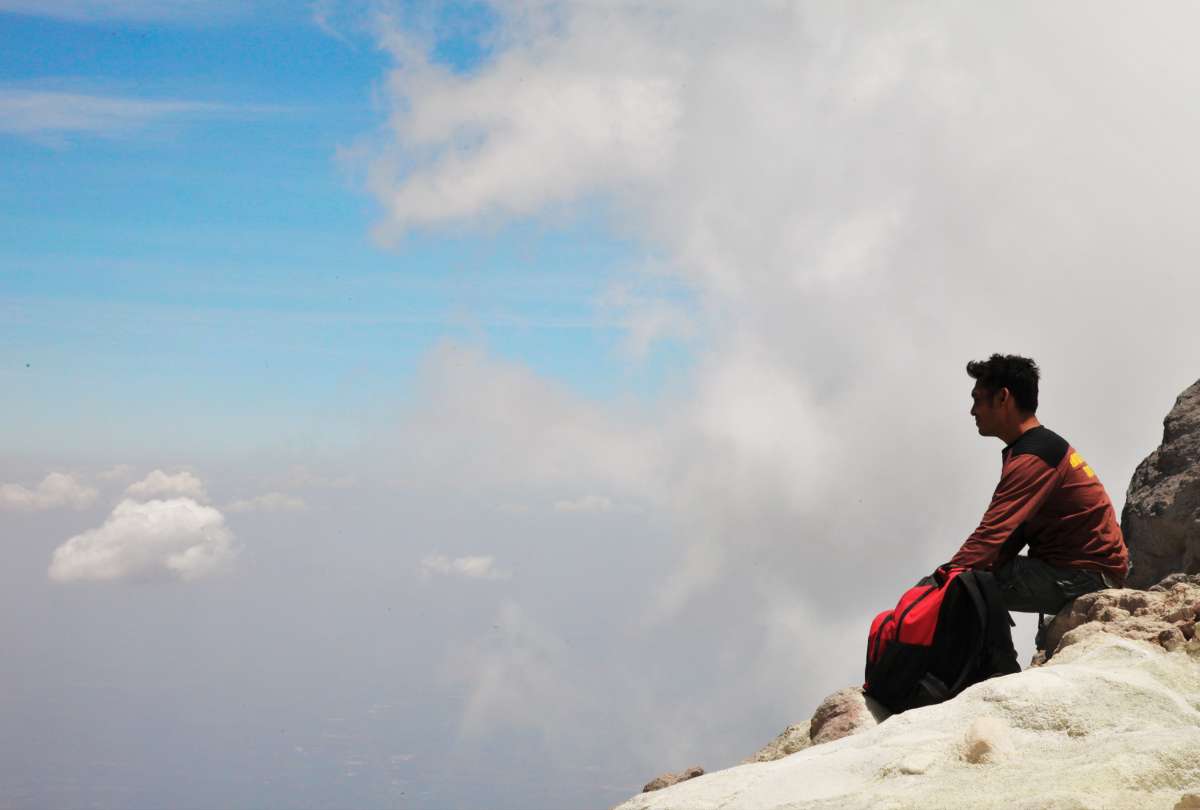 The smell of sulfur was in the air, and our torches pierced through a feint haze that slid up the cliffside, our visibility was low and we had to mind shrub, after fern when making our way up the gentle incline.

Our three Javanese guides were trekking without torchlight, one was even in sandals, they used the moon and the stars to guide them.

When the sun rose the air felt cold and we had our first rest break. Looking back down our path we could see the vast settlement that bowed down by the foot of Merapi. It’s hard to believe that so many people still choose to live there, but locals have their reasons; ideal farming soil and religious beliefs. Many believe that the previous eruptions are a result of spirits being angered by not receiving gifts, which they offer them at the summit annually.

The sun rise rays was flowing through the trees and the hike was about to get harder, as the gentle slalom route suddenly inclined along the cliff face. 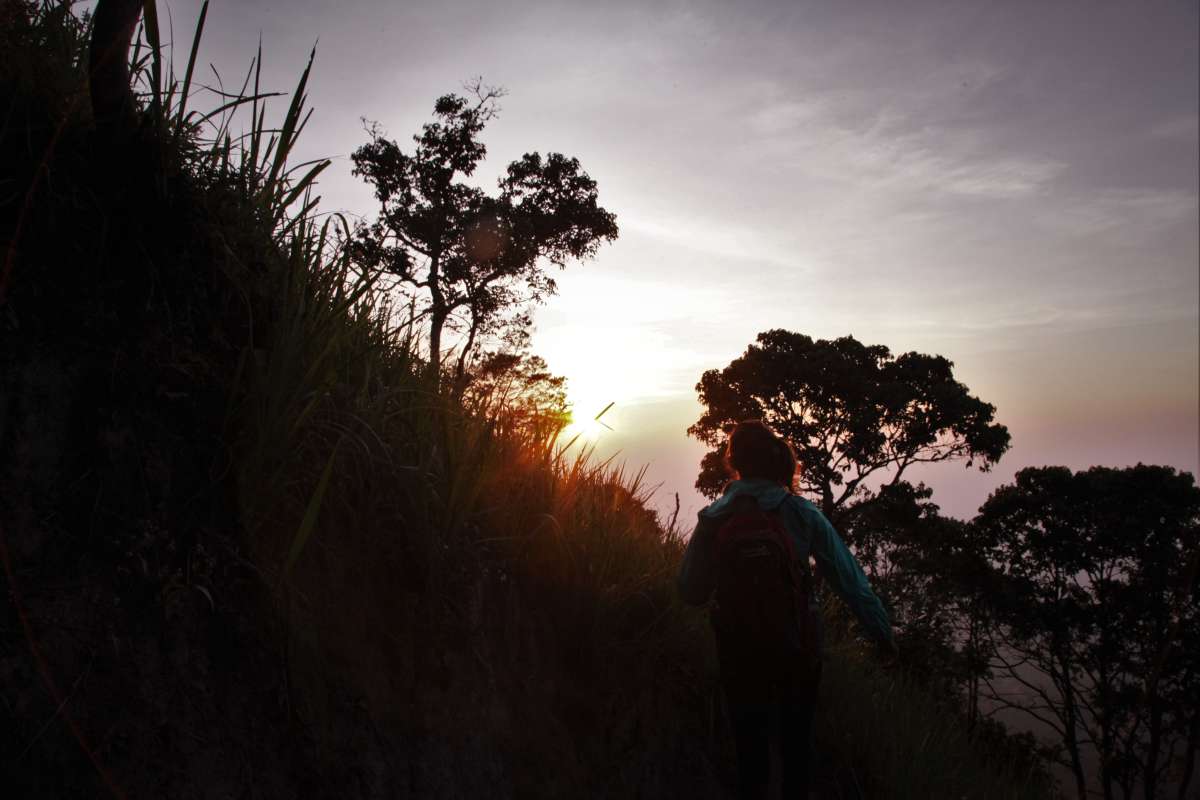 We had to wrestle with branches, and grab what we could to pull ourselves higher. We’d sometimes encounter clearings in the jungle where we could peer out, always seeing Merapi to our left.

The group of 15 people was now dwindling, as experienced hikers thought they had met their match. Even the hike leader, German Carl had suspiciously caught a chesty cough when the path started to get steeper around 2,000 metres up. In the end five of us remained, with the guide in sandals who had now fashioned a ragged towel into a head scarf that made him look like Little Bo Peep. 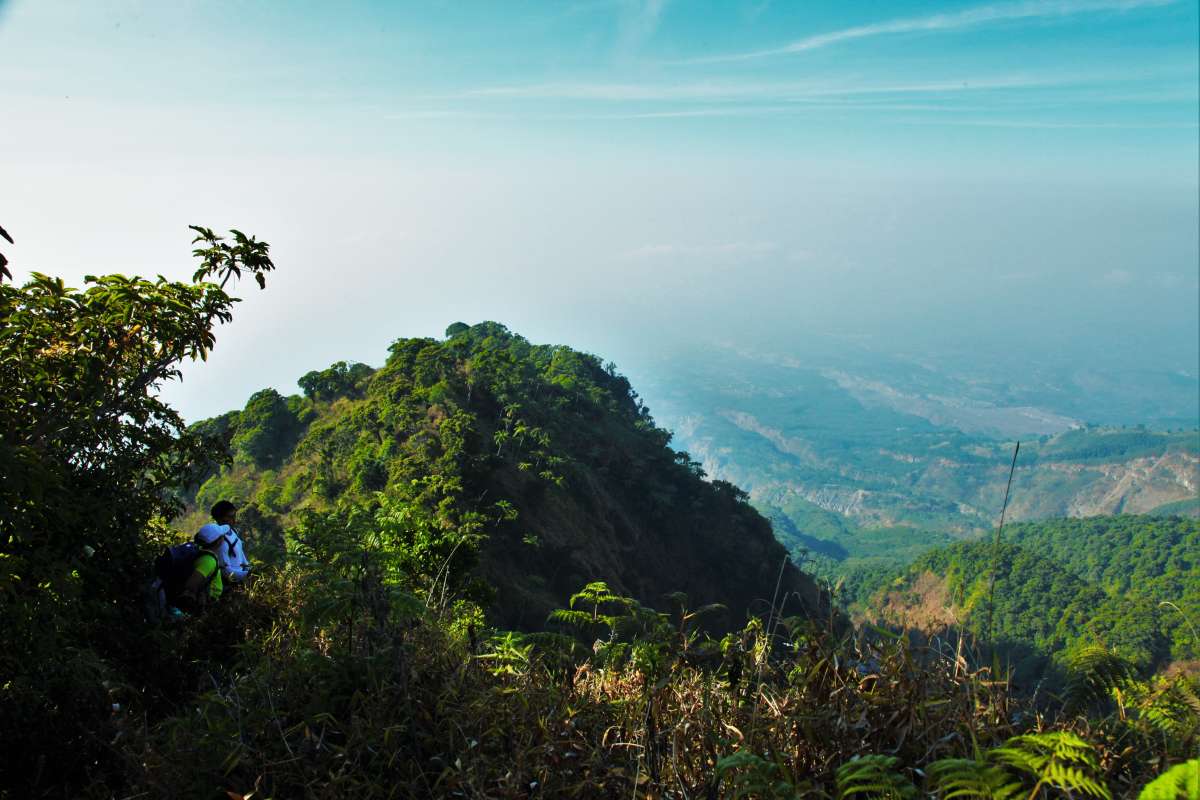 Those that remained were determined to conquer Merapi whether our blisters bled, our water ran out or Bo Peep lost his sandals. The steep incline under thick forest meant that we would gain altitude at a faster pace, and gradually the hills, and rice paddys below shrunk and cold streams of air came and went as we entered different air pockets. We found ourselves alone on the side of the mountain, no sign of Indonesian settlements in the distance, or anybody on the mountain top.

The ash was becoming difficult to grip with my shoes, and I found myself bouldering, up vines and branches just to follow the path. It was then that I misplaced my foot and the side of the path that I was on collapsed. Dangling off a cliff face isn’t like they show it in the Mission Impossible films; I wasn’t coolly gripping the edge of the cliff with my fingers, nor was I suspended up in mid-air like a character from Looney Toons, instead I was holding onto a fern root for dear life as Khalid grabbed my arm and yanked me back up.

Shortly after our stop at around 2,500 metres (10:30 am), we reached the dusty, dead plain of Devil’s Bazaar. This is where the locals gather every year to place their offerings to calm the spirits of Merapi. The volcano has erupted every 5 – 10 years without fail, yet the locals still make the treacherous climb to hopefully bring peace between themselves and the mountain.

With every step a rock would tumble down and ash would be kicked up into our shoes and mouth. We passed weather stations that looked like they hadn’t been touched since the Seventies, and yellowing shrubs trying to survive as we continued our walk through what felt like the world’s most depressing desert getaway. We were now face-to-face with the clouds that wrapped around our ankles and passed along the cliff tops. 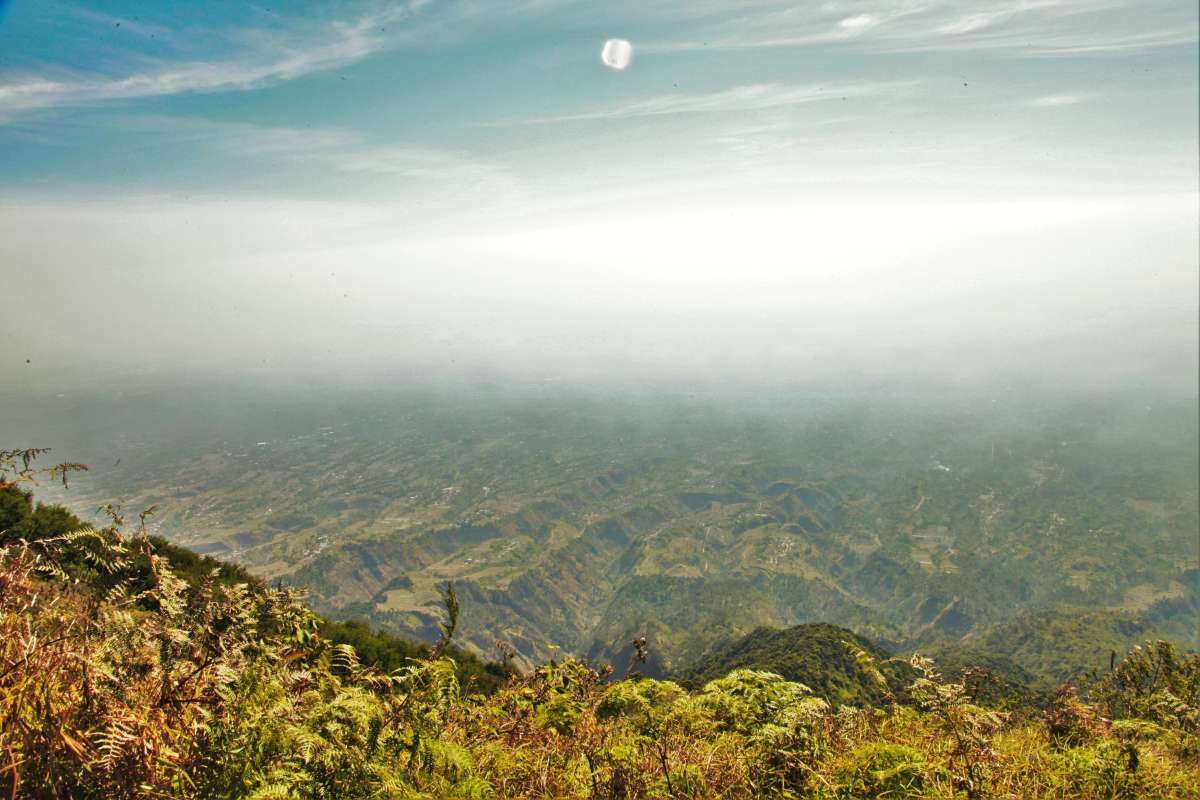 The head of Merapi stood above us and the surrounding wasteland with the white haze of sulfur circling it like a halo, we had reached the final stretch.

With smoke rising from the peak we began our ascent. The remaining point was like an old pub fireplace covered in ash and dust which covered our faces as we tried to scramble up the cliffside on all fours. 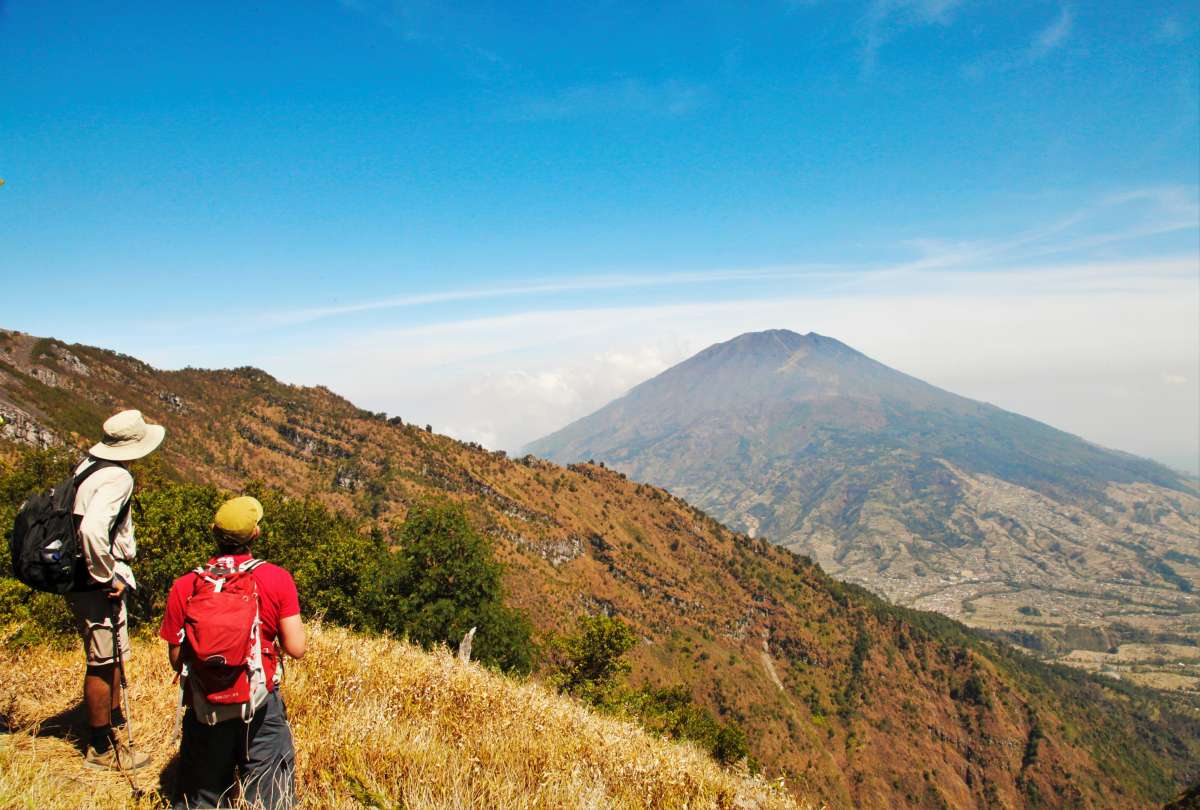 It was slippery. Every step we took we fell two steps down. Even Bo Peep in sandals seemed to tire, as more dust kicked up into our faces and the wind blew the clouds and ash into our sides. But I had to see the top, and so I pushed up the cliff face, hopping from rock to rock.

Standing on the shoulder of a giant, when I broke through the clouds I was surrounded by a deep blue and the air felt clearer. Finally I had reached the summit. I clambered up to the peak, which was an uneven rock around the width of a boardwalk and surrounded by a 200 metre crater drop which was covered by eery sulfurous fumes that seemed to escape from every rock crack. I was an ant on a pen nib, anxiously looking around, watching my step. The others joined me, and we waited a while in silence as the clouds sifted through our hair, and the monster of Merapi quietly slept.

We had to get down before nightfall, and luckily our guide knew a few tricks to get us down safely and quickly, no helicopter or ski lift. With our feet we skied down the side of the mountain, kicking up dust and dislodging rocks.

It was a huge challenge, but the summit will reward you in its own special way.

Oliver Jarvis is the in-house writer for Asian Geographic Magazines ltd. He currently resides in Singapore, where he is adapting to a culture which is far different from his simple British roots! Out of the office, Oliver enjoys travelling Asia; writing, photographing and, after both producing and directing his own documentary, now enjoys videoing his experiences. Once a lifestyle writer for The Gentleman’s Journal, and The National Student, Oliver decided to change his ‘game’ and cover topics that actually matter. Ultimately he wishes one day to have made enough money to retire with a Pina Colada on an isolated beach – a little like Tom Hanks in Castaway, but without the beat-up football.