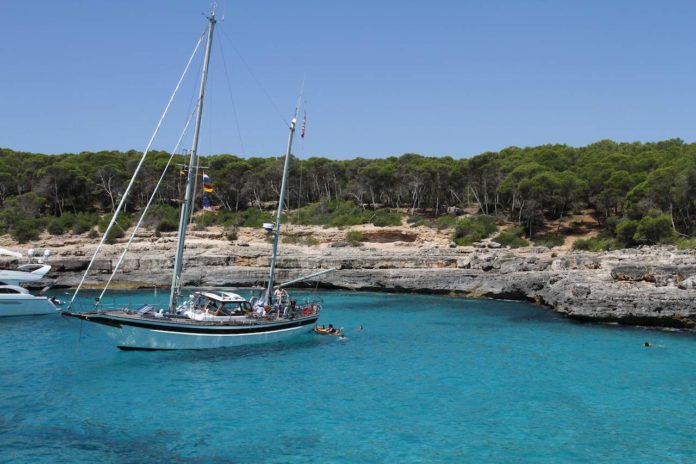 The beautiful island of Mallorca is just as lovely from the water as it is on land and I didn’t want to miss out on the waterside views of her coves, cliffs and curvy coastline during my short break. That’s why I bought a place on the Vita Bel II yacht at Cala D’Or.

As I walked along the palm hemmed Cala d’Or marina, I could see her undressed masts reaching up from this classic, 16m teak decked yacht.

She looked dazzling in the orange hues of this very sunny day, framed by the turquoise waters of the Med and the luminous blue of the sky. The moment was full of maritime promise.

Shoes off, it was a quick hop to board her, and within seconds we were handed a glass of Cava. There were 10 of us on board, some of us strangers, all of us smiling with a slight squint, into the brightness of the sun.

The skipper, Nigel, set the scene with a hearty hello from the central cockpit and followed with a quick run down about security and a few words on housekeeping. He then turned on the engine, and within minutes we all had another beer or a glass of Mallorcan wine in hand while soft music filled the air. The fun had started.

Nigel and his crew mate hoisted the sails and as Vita Bel set forth into the forming wavelets. The waters became a tad choppy, but no matter. Some of us took to the comfy seating around the cockpit, some to the bow, others to the stern to sunbathe on cushioned mats. Or to simply sit back to enjoy the views, the warmth of the sun, the gentle touch of the sea breeze and the distant sounds of passing seagulls overhead.

It was also fun to try my hand at steering, which as it turns out, looks easier than it is. For fear of ending up in Algiers, I handed control back to the amused skipper.

Soon we reached the gorgeous bay of Cala Mondrago in south eastern Mallorca. We were there alone, anchored in a stretch of calm waters overlooked by rocky cliffs, pine trees and surrounded by silent coves. We could also see the lovely white sands of s’Amarrador  beach in the distance.

On reflection, the chatter of easy conversation, the flow of the wine and the gentle sway of the waters made the whole world seem a far away place – at least for me.

The ship’s hydraulic swim platform was lowered and some tentatively made their way into the sea. Some just jumped in and a couple of dare-devils took to the free-to-use stand-up paddle boards, sometimes with hilarious results. I was tempted to snorkel, but became so distracted by sun bathing and supping wine that I had no time for these frivolities.

An hour or so passed all too quickly and we headed to Portopetro bay where we anchored again and this time for lunch.

The table was set, a sun canopy provided some shade and soon the table was covered in a feast of prawns, smoked salmon, Spanish tortilla, salad, hams and cheeses. And of course the wine and beer flowed.

“Do you believe in recycling” asked Nigel. Of course we did. “In that case toss your prawn heads into the water”. Though puzzled, we did so anyway. What a joy to watch the seagulls swoop down to capture these morsels even before they landed on the water. And those that were missed were soon devoured by fish who made it to the surface of the blue clear water in record time. It was comical.

While we enjoyed the spectacle, the tables were cleared and filled again with a platter of fruit salad with juicy mango and watermelon.

A final swim and snorkel and soon the skipper gently organised us back on the boat to sail home. Somehow, five hours had passed, in a mere moment.

Next time I thought, I will try the sunset cruise.

Find out more and how to book Vita Bell II here

NOTE: You can charter Vita Bell II for private tours and shared charters for small groups with open bar and catering included.