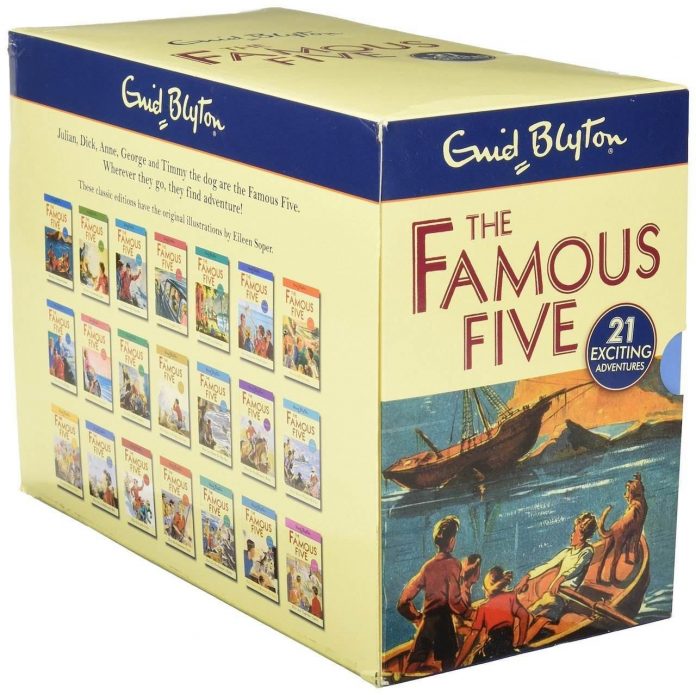 We don’t have a faithful dog called Timmy. But we do have two small children, a copy of Five on Kirrin Island Again and lashings – ok, four bottles – of ginger beer. And an Ordnance Survey Map (the reason will become clear later). We also have three days to explore the Dorset locations which featured in the Famous Five stories by author Enid Blyton which were first published more than 60 years ago.

Generations of children lapped up Blyton’s tales of a group of four friends and their trusty hound who spent their school holidays solving mysteries – all without such modern devices as mobile phones or the Internet.

The Famous Five Adventure Trail – newly launched this year – is an invitation to step back to another age. The clues are hidden in six carefully chosen places, all reachable by public transport (though a car makes things much easier, especially when visiting the idyllic and relatively remote Blue Pool). Two adults and two children can visit all the locations for the cost of a family day pass at one of the better known amusement parks in the UK.

The trail is the brainchild of the woman we meet at our very first port of call – the delightful Illustrated Worlds – also known as the original ginger pop shop – at Poole Quay.

Part museum of yesteryear – with a decidedly prewar focus which was fascinating for my four year old who loved the old fashioned games such as bagatelle and the gypsy caravan – and part emporium with a huge range of proper wooden toys and vintage style paraphernalia, it is the brainchild of cultural historian Viv Endecott.

Endecott, who knows more about Blyton and her links to Dorset (where the author holidayed several times) than almost anyone else, has created a really terrific space with something that will appeal to curious children – and reminiscing adults of all ages. Doubtless there will be those who think the whole thing is a darstardly plot to drive more visitors to the Ginger Pop Shop. And what a good thing that would be, given that Endecott runs it virtually singlehandedly and almost permanently under threat of eviction due to the high cost of rents in the area, I hope it works a treat. I thought the £5.00 entry we paid was brilliant value. I only managed to prise my son away by promising that we would come back again one day.

We started off by following in the footsteps of the famous young detectives by entering a secret passage and following a set of clues – which was to give us a taste for the real reason we were here; to find the clue that would form part of the new Trail.

The trail requires a visit to all six locations including the Poole Museum around the corner, another, tiny, outpost of Illustrated Worlds in the pretty village of Corfe Castle a few miles away via road or ferry, and the charming Blue Pool, not far away in Furzebrook where the original tearoom is run under the watchful eye of the octogenarian owner – the daughter of the first man who opened up the pool and surrounding land to visitors – who still makes the mouthwatering scones herself.

After stocking up on more ginger beer, we set off for the chain link ferry, which takes foot passengers and cars the short distance over the water to Sandbanks. Queues can often build up at busy times and the famously idiosyncratic Bournemouth-Swanage Motor Road and Ferry Company doesn’t always do as much as it could to keep those in the queue – which can stretch for quite a distance back down the road to Poole – informed.

The journey itself only takes five minutes and before long we were motoring towards Swanage and two more clues. The first is on the pier – and you might need to ask a sailor for help to make sense of the message – and the second is best viewed from the left hand side of the train as you steam towards Corfe Castle village which sprawls around one of the best ruined castles in Britain – and which is thought to be the inspiration for the Castle on Kirrin Island which itself features in the story ‘Five on Kirrin Island Again’ and which is well worth a (re) read if you have children aged six and above.

The town of Swanage is perfect for a family break and there was plenty to enjoy on this return trip including the gentle beach and the nearby country park.

We holed up at The Limes Hotel, a brilliant B&B perched up a hill, five minutes (seven minutes if pushing a buggy uphill) from the centre of town, run by the remarkable Lyn who has an uncanny ability to know what a stressed parent needs.

The Limes offers a range of rooms and we found the generous sized family room – with a double and a single bed and space for another cot or zed bed – perfect for our two night stay. Rooms start from £46.00. Children (5-18) from £15.00. Under 5s no charge. For more choice, use this link to search more hotels in Swanage.

The next day, fuelled by a hearty breakfast, we set off for Corfe Castle via steam train. Although the castle isn’t part of the trail, it is well worth visiting and we tired ourselves out searching for the coloured shields hidden around the site. Successful young shield hunters are rewarded with a medal – particularly appropriate in an Olympic year – and parents can reward themselves with a delicious – and reasonably priced – cream tea in the National Trust cafe – the Trust owns and manages most of the village – next door.

Corfe is the highlight for the younger members of our party (who also enjoyed choosing postcards for Grandma at the Ginger Pop Shop conveniently next to the post office) but it was the Blue Pool that won the hearts – and soothed the minds – of the adults.

Undoubtedly we were lucky to visit on a day when the water really did look a spectacularly vivid greenly blue but we agreed that the best bit was the tea room itself which, the owner told us was almost exactly (aside from the modern day health and safety requirements and a new kitchen!) as it was when it was first built to refresh the visitors who came to see the famous pool in 1935.

As we sipped tea – and ginger beer of course – and nibbled warm scones with thick clotted cream and jam, the daily grind of our everyday lives seemed to fade into the background.

I wouldn’t have been surprised if Ann, Dick, Julian and George and Timmy had bounded through the door and handed over a few shillings for a pot of tea and some rock buns.

[Editor’s note: the brochure is no longer available]

Top Tip: If travelling with children, don’t try to visit all the sites on the trail in one go. Two or three days with time at the beaches along the magnificent Jurassic Coast is ideal.