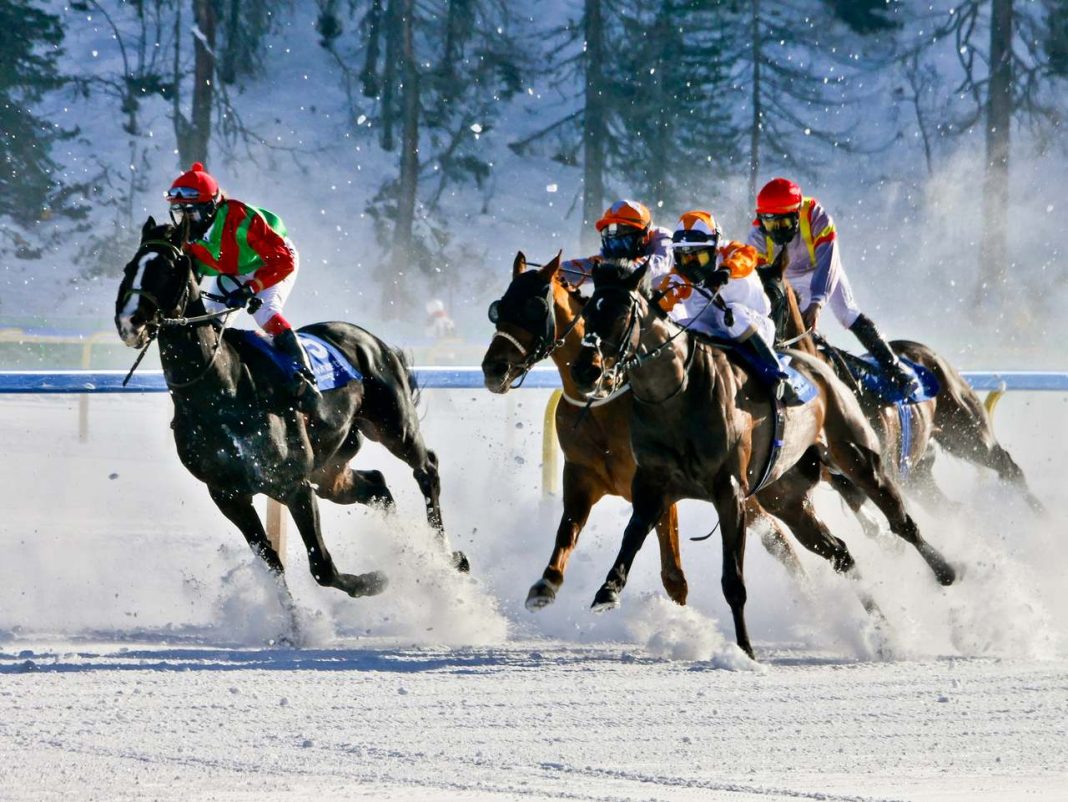 White Turf international racing festival is the coldest horse racing festival on earth yet the Swiss have been doing every February since 1906 like clockwork. And they only had to cancel it once during the mild winter of 1964.

Still, I’m arriving on the second race day of the season and the previous week’s course had to be shortened. Apparently the unseasonally high temperatures had caused water to form on several places on the track and there was a danger of slipping on an icy patch.

Since then there’s been heavy snow and the ice has a thickness of over 30cm, enough to carry the weight of the tent city that has sprung up on the frozen lake. Even better, it’s a bright sunny winter’s day, and I’m well wrapped up to experience the coldest horse racing on earth. My fellow racegoers are in their furs, after all this is St. Moritz, and are already knocking back the champagne and oysters.

The jockeys, owners and trainers have come from all over the world, not only attracted by over £300,000 of prize money, but also by the uniqueness of the event – this is the world’s only racecourse on snow and 300,000 spectators are expected to attend.

As well as conventional flat racing, there’s harness racing with the horses pulling a ski mounted buggy, and skijoring, where riders on skis are pulled by unsaddled thoroughbreds And all this against a backdrop of the magnificent Engadine mountains.

The first race starts at 11.30 and I’m here early to soak up the atmosphere. There’s live music on various stages, gourmet catering and, of course, queues for the betting office. Children get pony rides, trainers show off their horses in the paddock as the crowds gather in the stands with their binoculars. I take my place with my camera and am excited to see the 1700m harness race. It’s like Ben Hur on ice, with the riders in their chariots lost in blizzards of snow kicked up by galloping hooves.

Events happen every half hour and next up is a flat race, slightly delayed as one the horses lost one of its special tailor-made shoes – the edges are fitted with mini crampons to bite into the snow. It’s followed by a slower pony race, then it’s the turn of the extraordinary skikjöring. Although the flat and harness racing is no more dangerous than on turf, this is far more hazardous. Since the jockeys are on skis, being pulled by the horses, falls are common with resulting broken bones.

Soon they’re off and. as they hurtle past me at 50km/h, I must say it’s hard not to be impressed with their sheer daring. Physical fitness and strength, to say nothing of skiing skills are crucial, but it’s just a crazy way of passing your Sunday. Miraculously nobody seems to get hurt but the crowd goes wild as they complete the 2,700m course. The winner is Zambeso, pulling skier Adrian von Gunten who wins the title “King of the Engadine” for 2020 and prize money of CHF15000 (around £12000).

After all this excitement the next flat races seem like a bit of an anti-climax but there’s still big money involved. The GP LONGINES has a purse of another CHF15000, as does the GP Sport Mind and Friends, and it’s certain that big money is changing hands at the bookies. I only spend small change with them, as I haven’t studied the form, but of course lose it all. At least the champagne is on ice.

FLY: SWISS offers more than 150 weekly flights from London City, Heathrow, Gatwick (seasonal),Manchester, Birmingham, Edinburgh to Zurich, Geneva or Sion (seasonal).One way fares start from £74 to Zurich and £83 to Geneva including all taxes, fees and surcharges, one piece of hold and hand luggage.

STAY: The 5* Grand Hotel des Bains Kempinski is a short walk from the lake and has an excellent Michelin-starred restaurant.