Eight minutes’ walk from Constance railway station and a 70km drive from Zurich Airport, the Steigenberger Inselhotel stands on the banks of the largest lake in Germany enjoying a spectacular situation on a private island on Lake Constance. It is a terrific base from which to explore the largely-unknown historic German city of Constance.

The building was originally a Dominican monastery founded by Bishop Heinrich von Tann in 1236. From 1414 to 1415, the famous Czech religious dissenter Jan Hus was imprisoned in the building during the Council of Constance to decide the new Pope. The hotel manager now calls Hus “our first long-stay guest”.

It was converted into a hotel in 1875 by the then owners, the Zeppelins, also well known as the inventors of the pioneering airships of the same name.

Now it is a beautiful establishment with a location most hotels would sell their granny for. On arrival, I walked straight through the reception onto the enormous terrace at the back of the hotel – to a view that took me aback: a grand panorama of Lake Constance. Simply breathtaking. 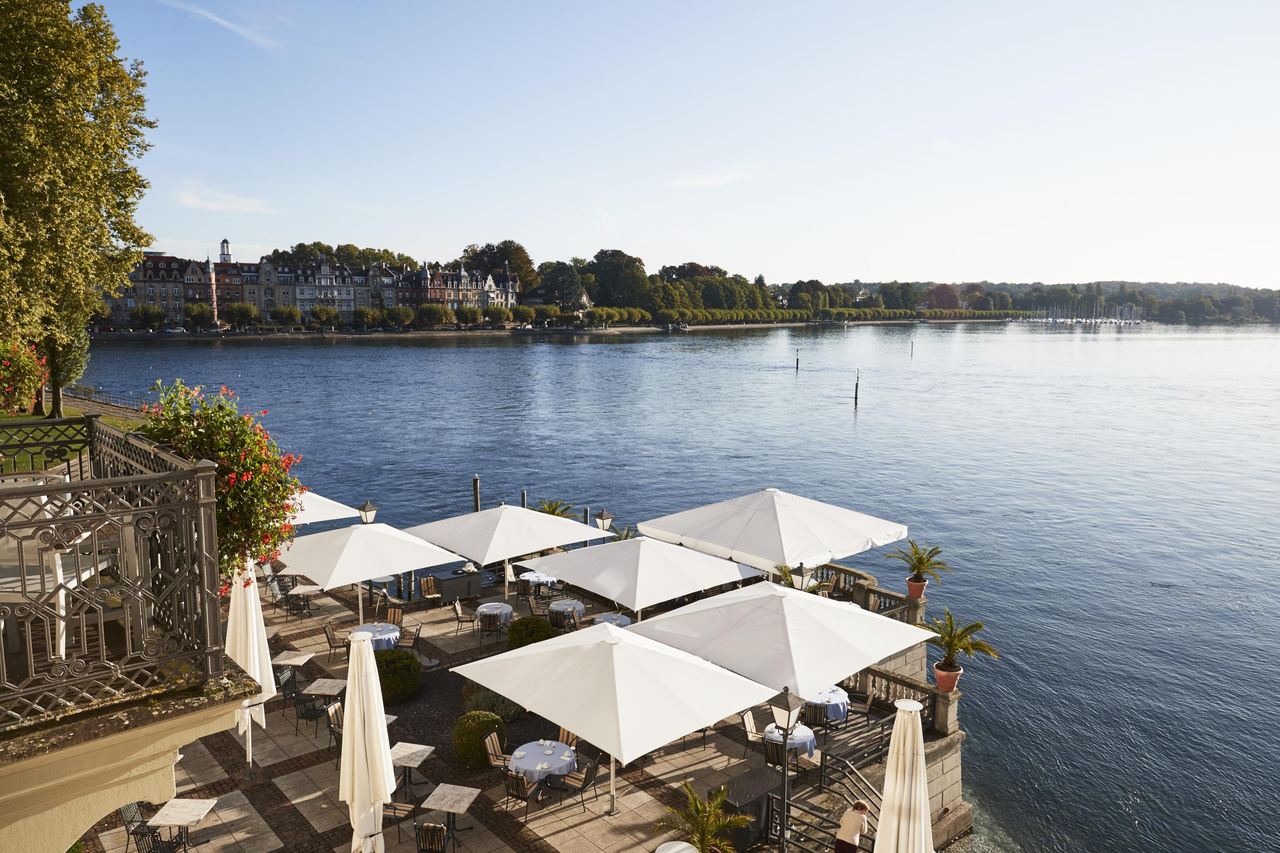 I was also taken by the intriguing murals in the hotel’s cloisters (a legacy of the building’s history as a monastery). Painted between 1888 and 1904 by Professor Karl Haeberlin from Stuttgart, the murals depict significant events from the city’s past.

There is so much history that emanates from every nook and cranny of the Steigenberger Inselhotel, which could easily pass as a tourist attraction in its own right.

There are many business guests at the Steigenberger Inselhotel, but when I was there the majority were tourists. The hotel has a relaxed vibe well suited to those on holiday.

The Steigenberger Inselhotel has 100 rooms and two suites. They all offer at least partial views of Lake Constance (which straddles three countries, Germany, Austria and Switzerland). 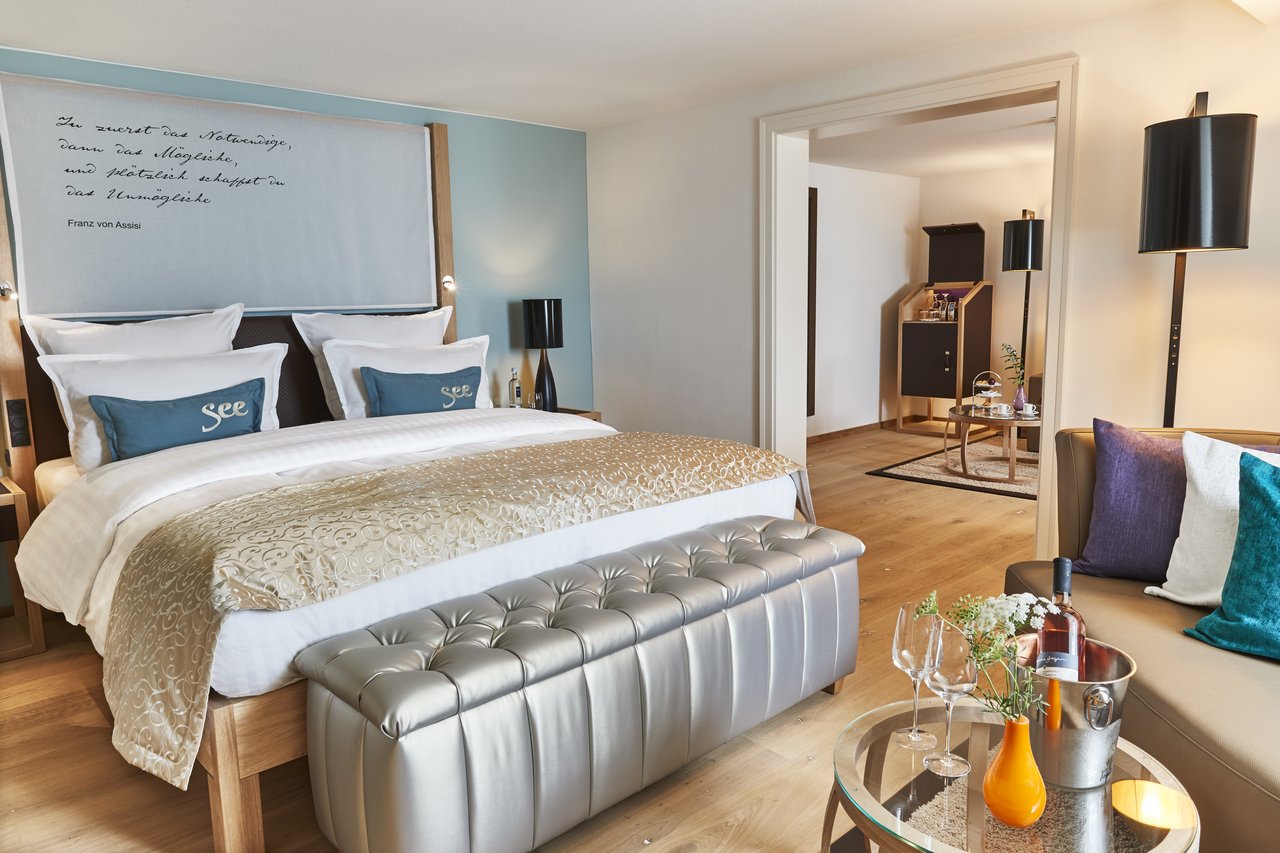 The rooms, which all contain a flat-screen TV with Sky, as well as wood floors, oversized double beds, air-conditioning, a minibar, a work desk and a safe, are notable for their clean lines and elegance. But if you ever get bored of looking at the interior, just turn towards the window and drink in the splendid view of Lake Constance. 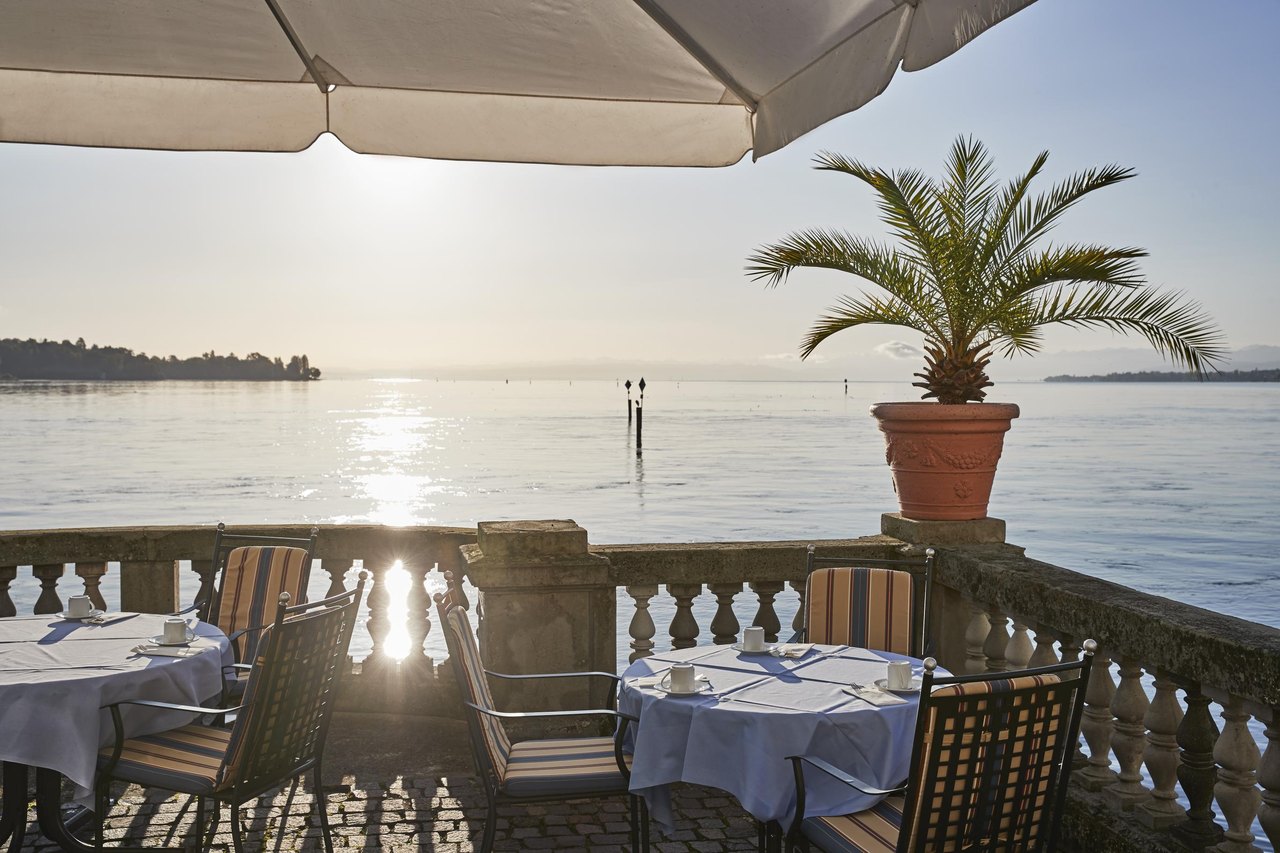 There are two restaurants at The Steigenberger Inselhotel. The Seerestaurant, which offers a fabulous breakfast buffet, specialises in fish caught that morning in Lake Constance. The restaurant gives on to the hotel terrace, a magnificent spot to sit with a sun-downer and take in the vistas of the lake. 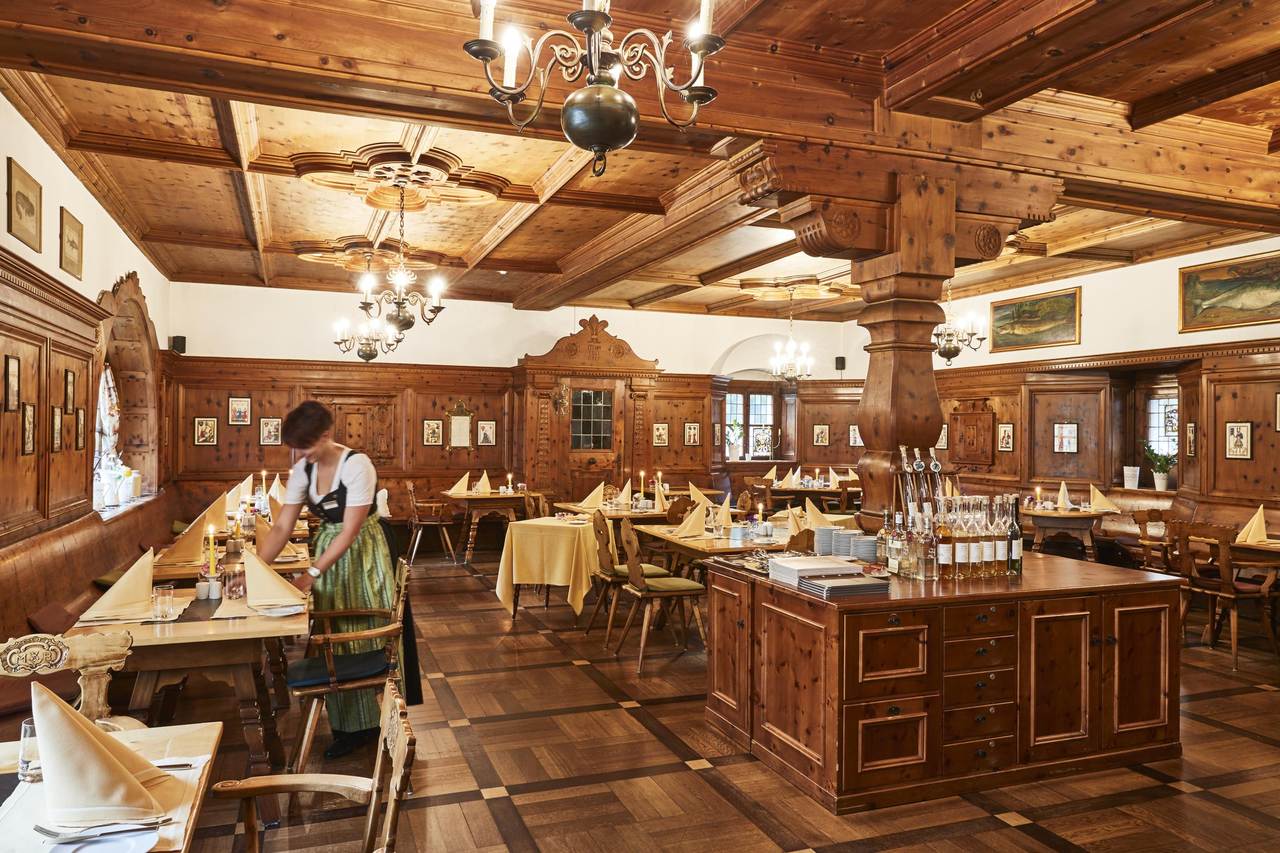 The second restaurant, the Dominikaner Stube, is clad entirely in Swiss pine. It recalls the monastic history of the establishment and serves delicious regional specialities such as rillette of smoked Lake Constance white fish with cream cheese, apple jelly, walnut and wild herb salad and Lake Constance pear and almond cake.

After dinner, guests can enjoy a glass of local wine in the Zeppelin Bar, named after Count Ferdinand von Zeppelin, who was born in this very place.

But of course, the hotel’s most impressive sports facility is Lake Constance itself. From June to September, you can swim in the very pleasant 26-degree waters of the lake from directly in front of the hotel – with lifeguard supervision. Hotel staff can advise you on the best lakeside trails to follow for a walk, jog or bike ride.

Even the monks of yore might have envied the level of relaxation guests can achieve at the Steigenberger Inselhotel.

Rates start from €109 per night for a single room.

The Steigenberger Inselhotel is just three minutes’ walk away from the perfectly preserved medieval city centre of Constance. 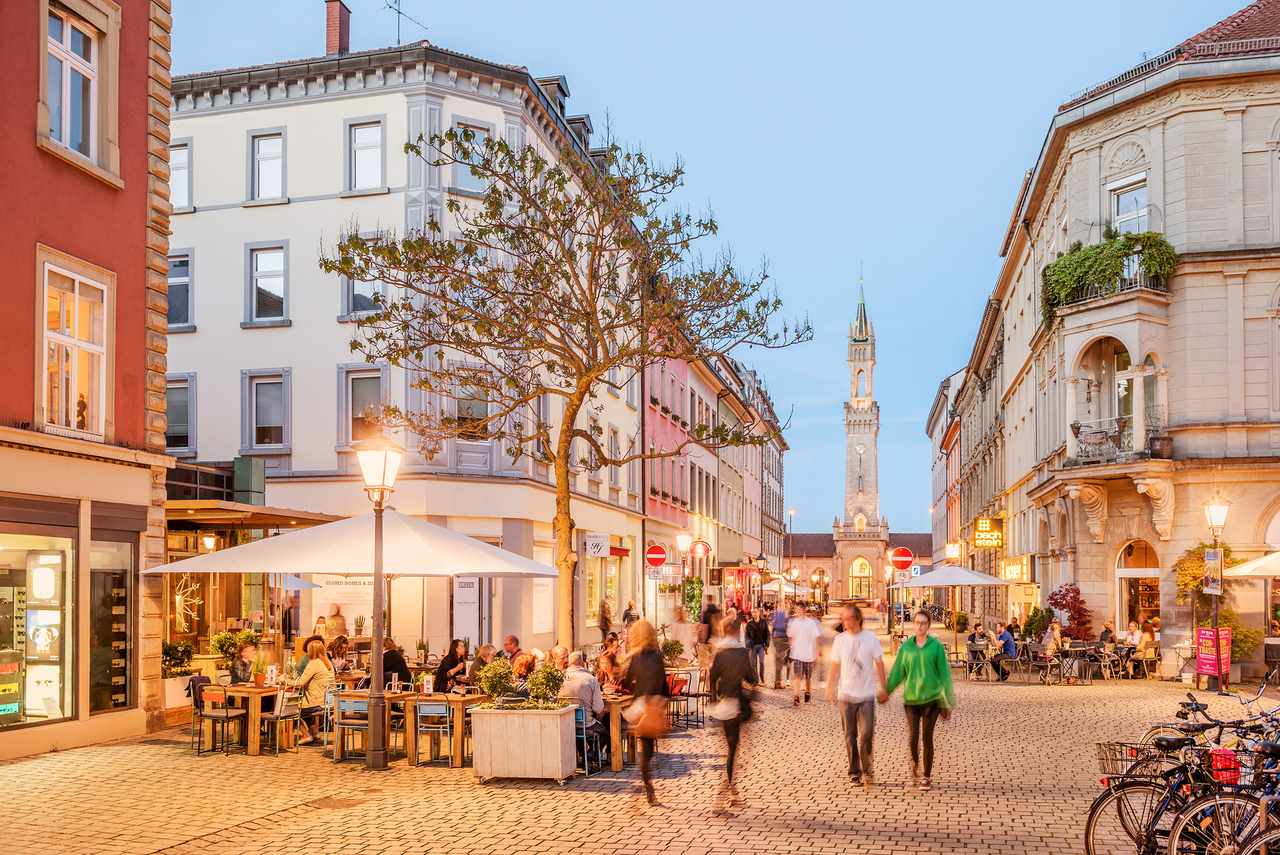 I would advise ditching the map and just wandering haphazardly through the appealing, zig-zagging streets of this richly historic area. You might also be lucky enough to spot some of the historical reenactors who frequently dress in period costume around the iconic cathedral.

After that, you will certainly have earned a sit-down. I would recommend taking a seat in the picturesque lakeside Biergarten and enjoying a local beer – the region is overflowing with fine craft breweries. The Biergarten a great place simply to watch the world go by and soak up the charms of Constance.

ALSO READ: Top 10 things to do and see around Lake Constance

Since graduating from Oxford University, James Rampton has written twelve books. In addition, he was a staff feature writer on the Independent for a decade. He has subsequently written travel features for the Independent, the i, the Saturday Express magazine, the Daily Mail, and the Scotsman magazine. He is also a regular newspaper reviewer for the BBC News Channel, as well as chairing Q and As for Bafta, the BFI and the BBC.