It’s an old 17th century arch and courtyard that leads into this discreet yet very hip boutique hotel. In fact, it’s hardly a hotel entrance at all and so easy to walk by if at all distracted by the charms of the grand Keizergracht canal opposite, quaintly sandwiched between 18th century homes. 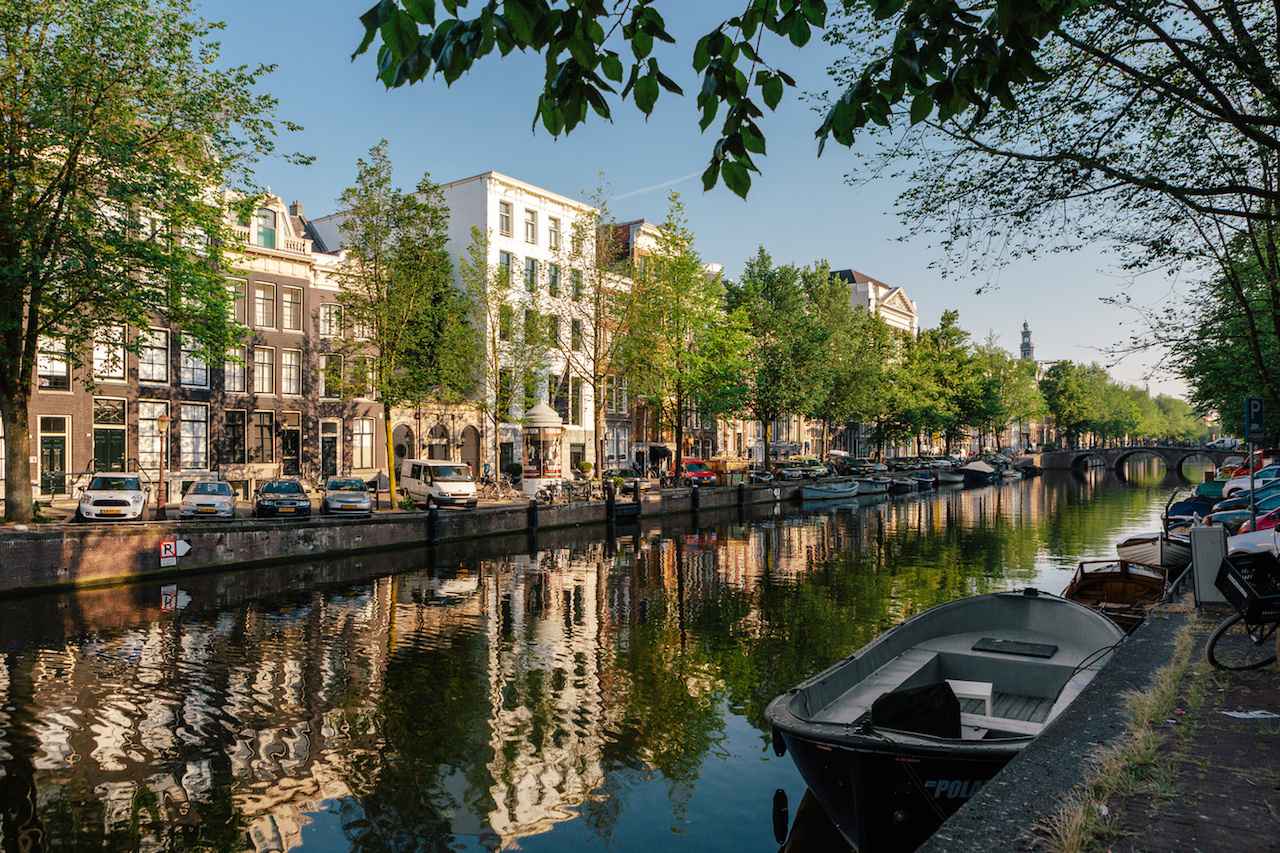 However it is quite historical as it was once the gateway to the first theatre in the Netherlands which had the first ever female performer and the accolade that Vivaldi once conducted his orchestra here. The building was made of wood and burned down thanks to an errant candle. 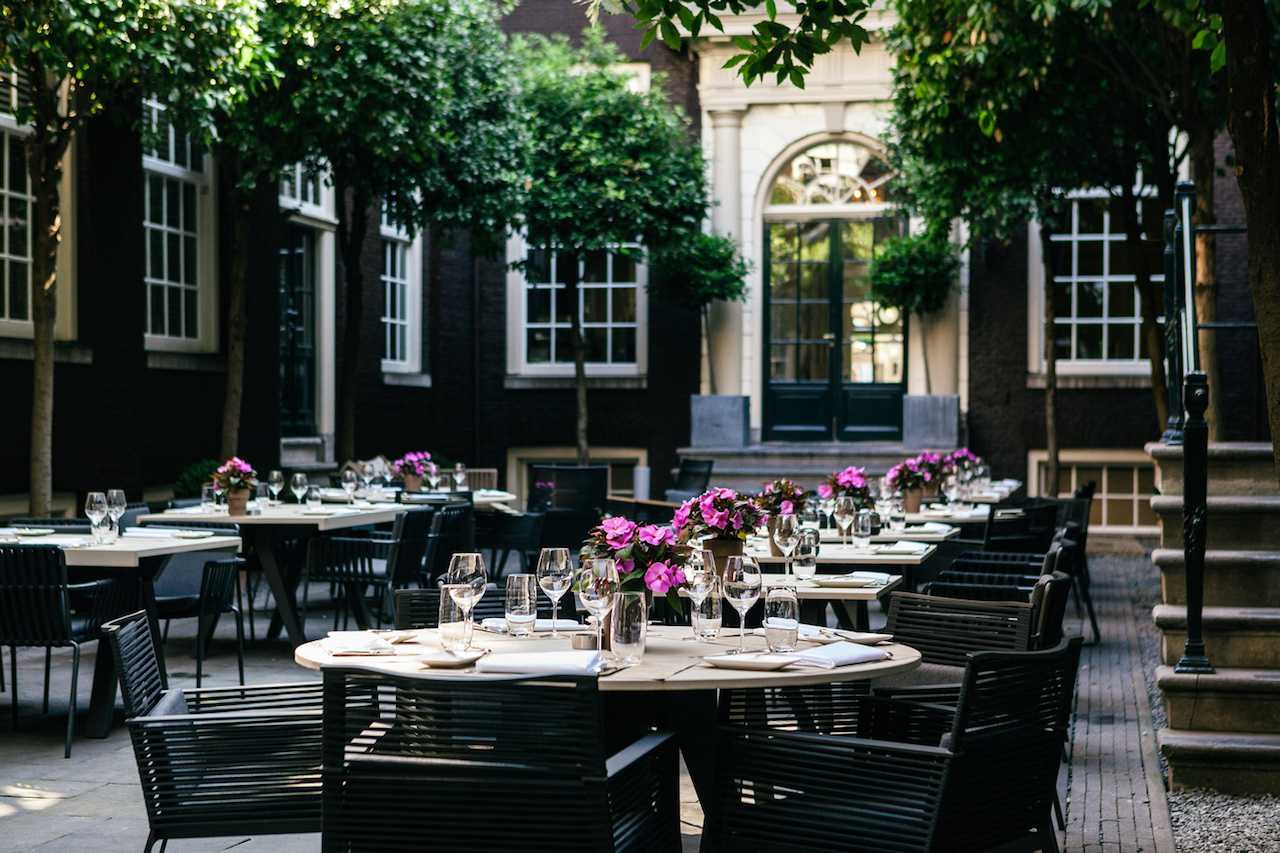 It remerged as an orphanage and soup kitchen and remained so for 200 years. In a complete reversal of fortunes resulting in a refit in 1999 it opened as the first boutique hotel in Europe.

Named after Welsh writer Dylan Thomas, it remains a landmark building with a sense of days-gone-by elegance thanks to wood-pannelled walls and leather chairs mixed with modern light fittings.

Nevertheless a stay there can be quite joyous knowing that you can enjoy a coffee alfresco in the inner courtyard in a serene environment while surrounded by the best that Amsterdam offers. 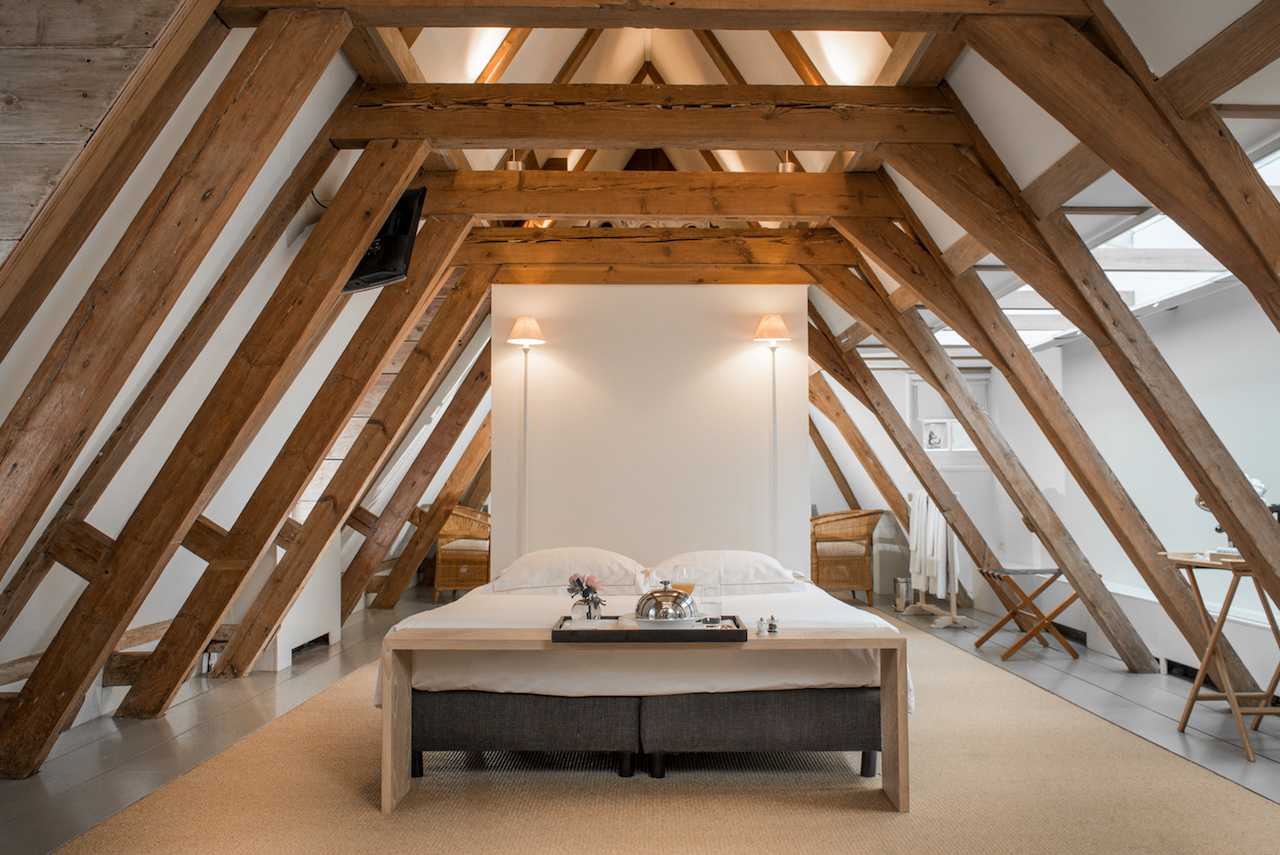 The romance of the hotel and its superb location makes this a great short-break hotel to catch up on some romance (or just time out) for couples who also want easy access to city highlights. Disabled travellers will not appreciate the lack of access though. And for some, the duplex rooms with steep spiral staircases may be a challenge at night.

Bathrooms are plush with luxuriously large baths to soak in. 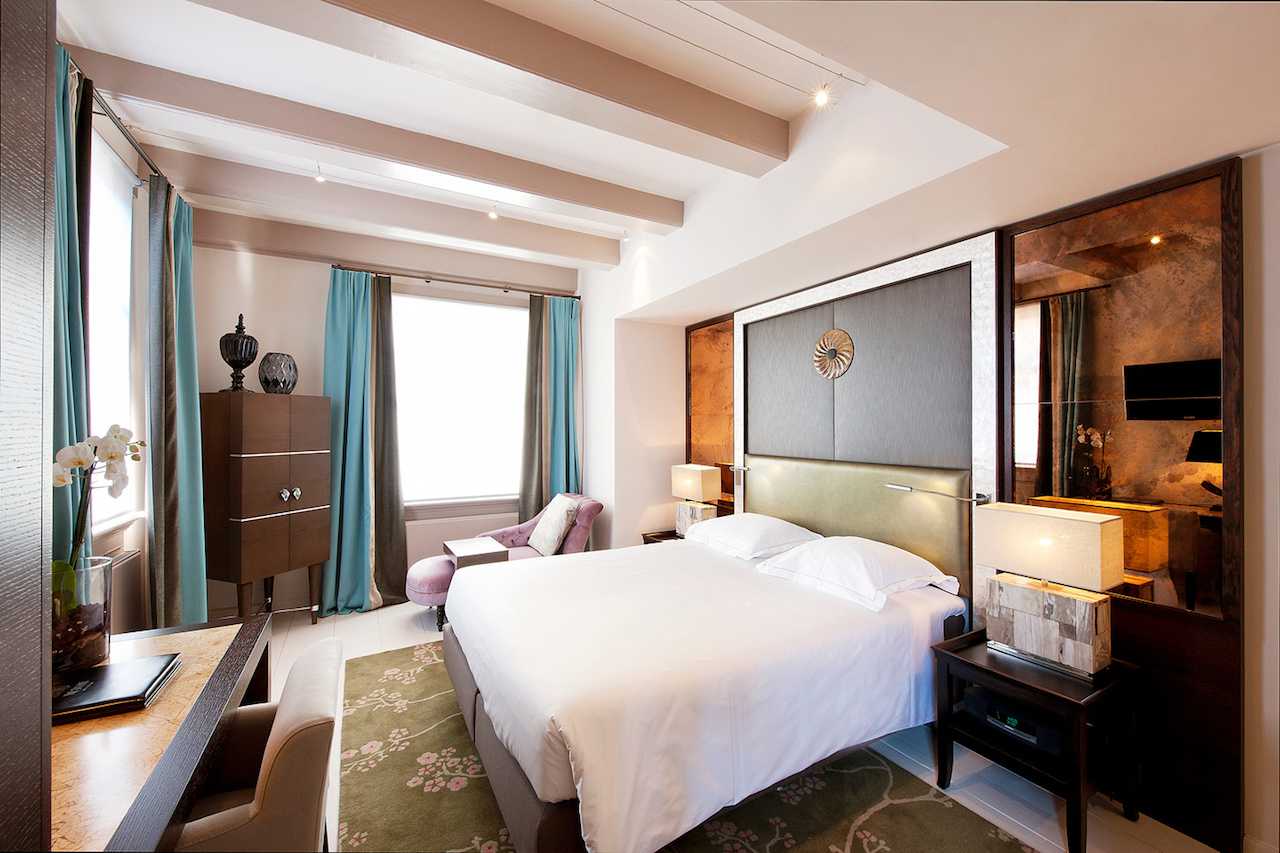 There are two buildings that make up The Dylan and so the 40 rooms vary in size and views. Some look over the canal, others over the central courtyard. And some are split onto two levels. Sometimes you will find muted colours, sometimes plush décor that look highly ornamental. But all have espresso machines, docking station and a flat screen TV. Particularly useful are the placement of the sockets on top of the writing desk making it so easy to plug in devices.

Incidentally, there is a Dylan Thomas suite with a fully stocked drinks bar in his honour (apparently he loved to drink). News from the grapevine is that Mariah Carey stayed in suite 32.

There is a small 24-hour gym and series of black bicycles parked outside that guests can rent. Room service and front desk services are available round the clock. 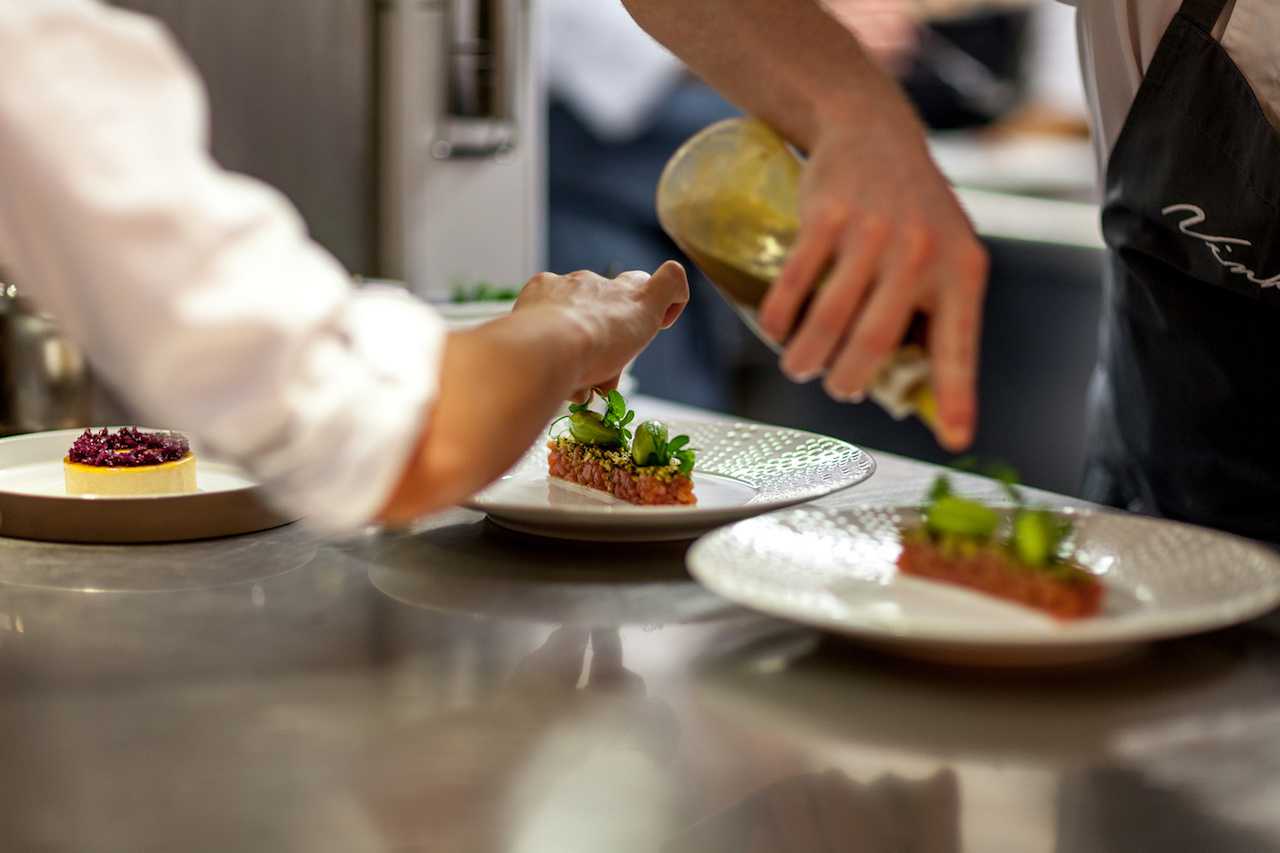 There is a Michelin starred restaurant called Vinkeles situated in a room that was once used as the almhouse bakery. It still has a rustic look with rough brick walls, timbered ceilings and even the original cast iron ovens from its days as an orphanage. The menu, generally French fare, includes sea urchin, veal tongue and oysters and signature dishes include the Scallops torched with charcoal, fermented in white grape with aged Dutch goat cheese and John Dory poached in goose fat, whith white coco beans, Dutch grey shrimps and  tomato.

In the morning this restaurant becomes the place to take breakfast – cooked or continental. 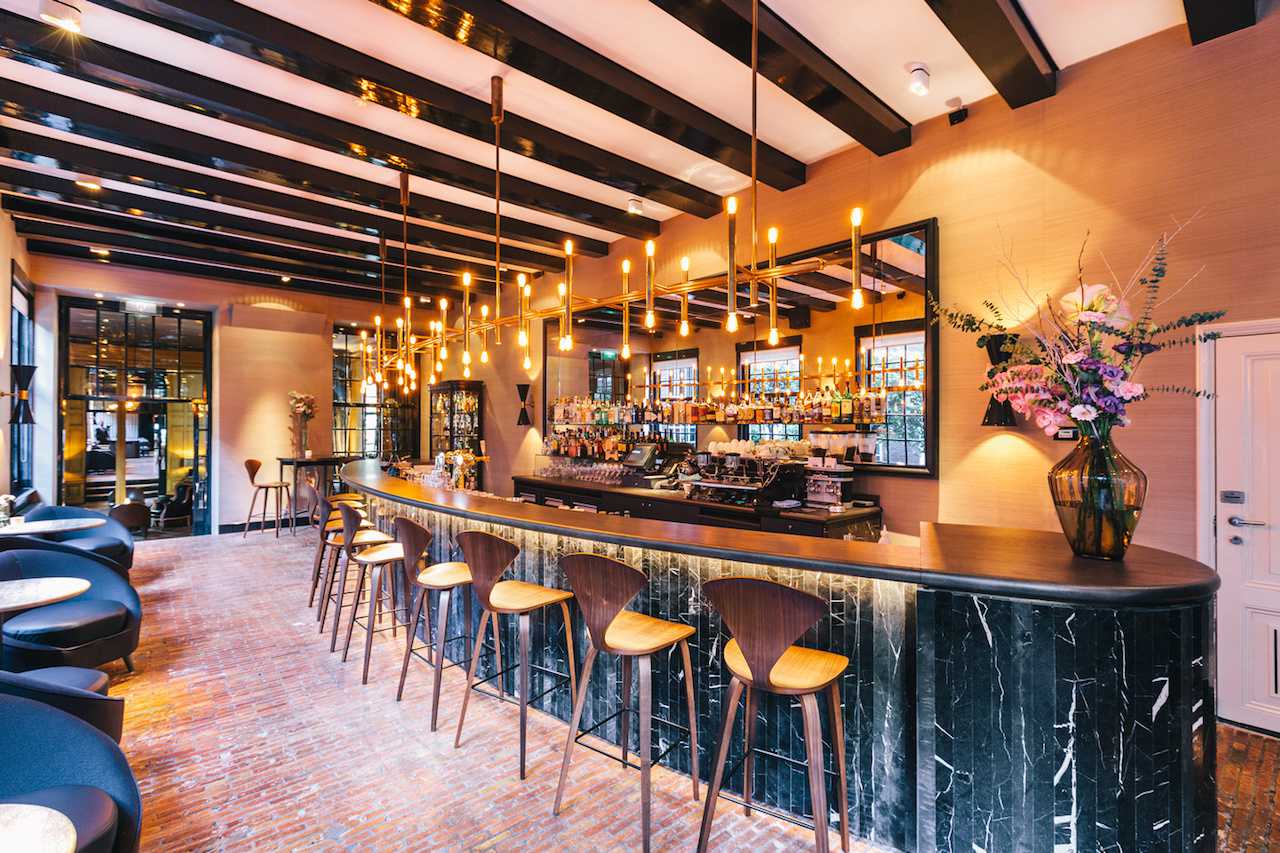 The new Occo bistro and bar is a lovely ambient space to pass an evening – marble floors, timbered ceilings, gorgeous dimmed lighting, dark wood bar with stools and some tables. They serve small dishes (such as beetroot wrap, Espinaler Spanish mussels in pepper sauce), nibbles and cocktails. Their signature cocktail is the Dylan Thomas made suitably alcoholic to reflect the writer’s love of being drunk. This one is made with Singleton whisky, Grand Marnier, vanilla and serviced with a brown sugar cube which is set aflame at the table then mixed into the drink. Potent stuff.

The Dylan sits in the midsts of The Nine Streets shopping quarter where nine quaint streets are brimful of boutiques, cafes and unusual gift outlets. Around 10 minutes’ walk one way leads to Anne Frank’s House and 10 minutes in the other direction takes you to two sensational art galleries: Rijkesmuseum and the Van Gough Museum.

This hotel may well be in the pricier room range, however, the location, the sense of history, the fine food and luxury rooms make it in my opinion, worth it if affordable for you.