The journey below can be taken as part of Great Rail Journeys India’s Golden Triangle – a 5* rail 13-day tour which includes the Shatabdi Express and the Toy Train plus excursions to Delhi and Agra with its white marble icon the Taj Mahal. Prices start from £1,995pp, departing Oct 2017 – Dec 2018. 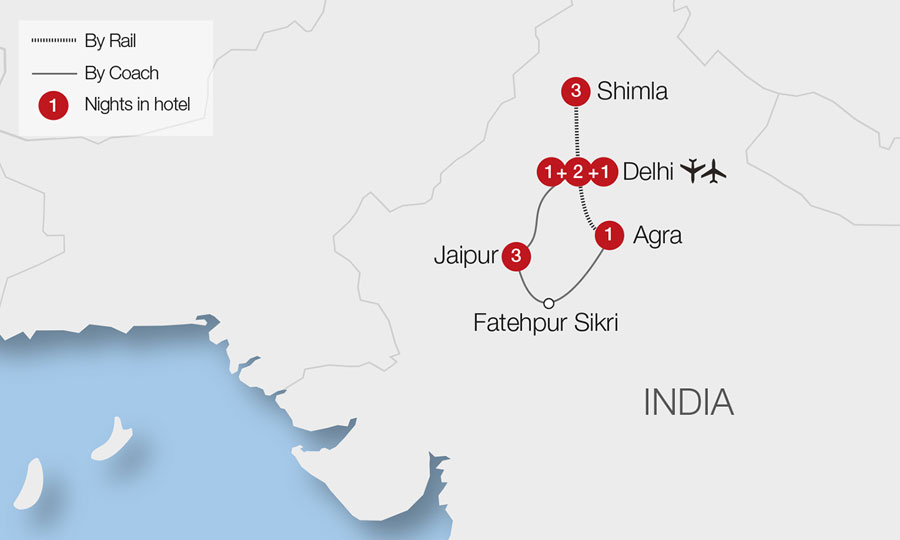 Delhi to Kalka on Shatabdi Express

I’m at Delhi station, early in the morning, where it seems that a large proportion of the 23 million people who daily use Indian Rail have all decided to take the train. I’m taking the Shatabdi Express for Kalka, where I’m then going to catch the narrow gauge “Toy Train” up to Shimla. It’s a four hour journey and the air conditioned Executive Class is comfortable and includes a rather delicious spicy breakfast, complete with a few warming cups of Indian Chai. 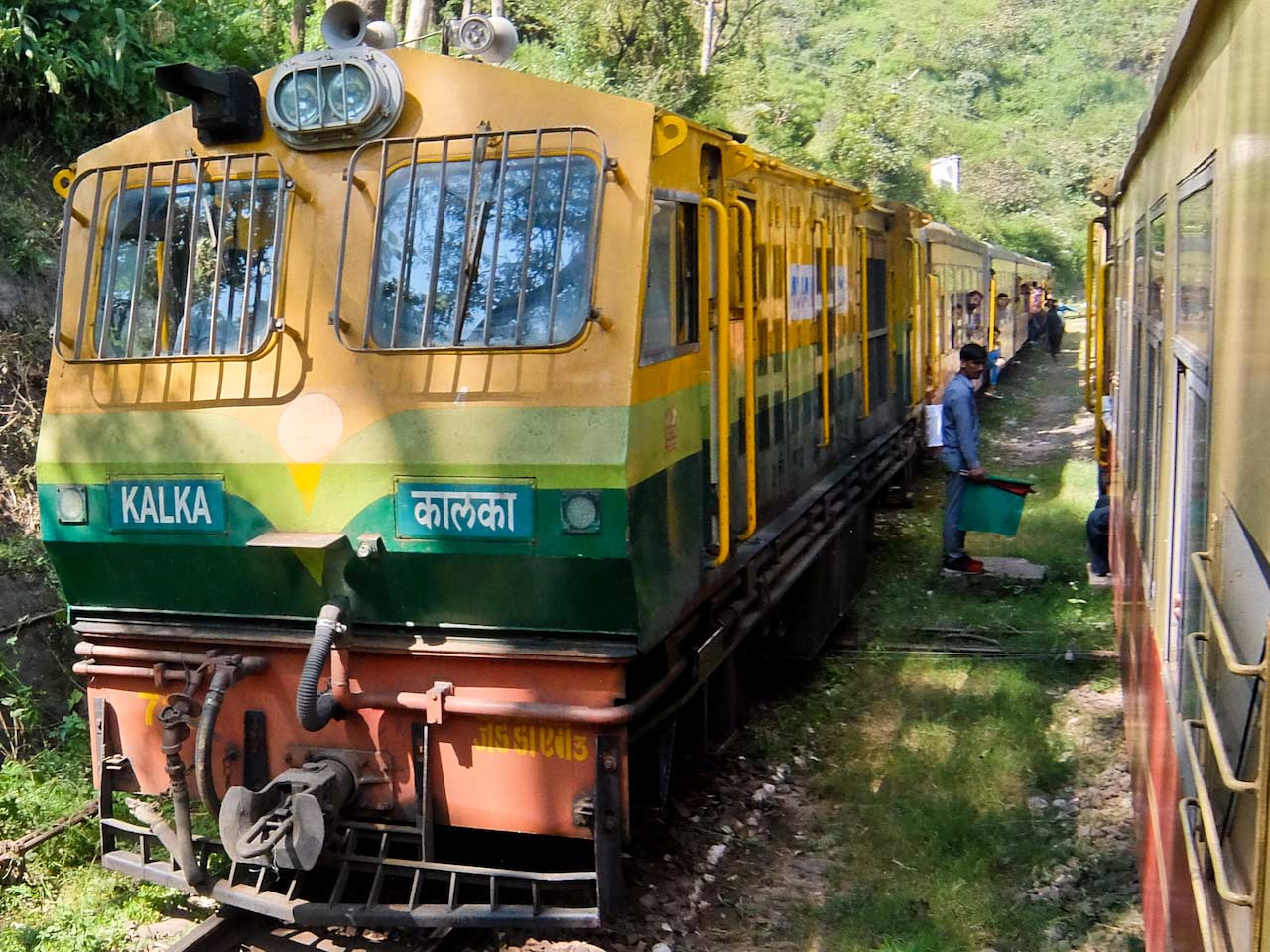 We pull into Kalka, almost on time, and I cross the platform to board the Himalayan Queen, patiently waiting for passengers. It’s dwarfed by the mighty Express, and I completely understand why it’s known as the “toy train”. After the comfort of Executive Class, the six rows of seats in the narrow gauge carriages are rather uncomfortable. Fortunately I’ve been advised to bring my own cushion. 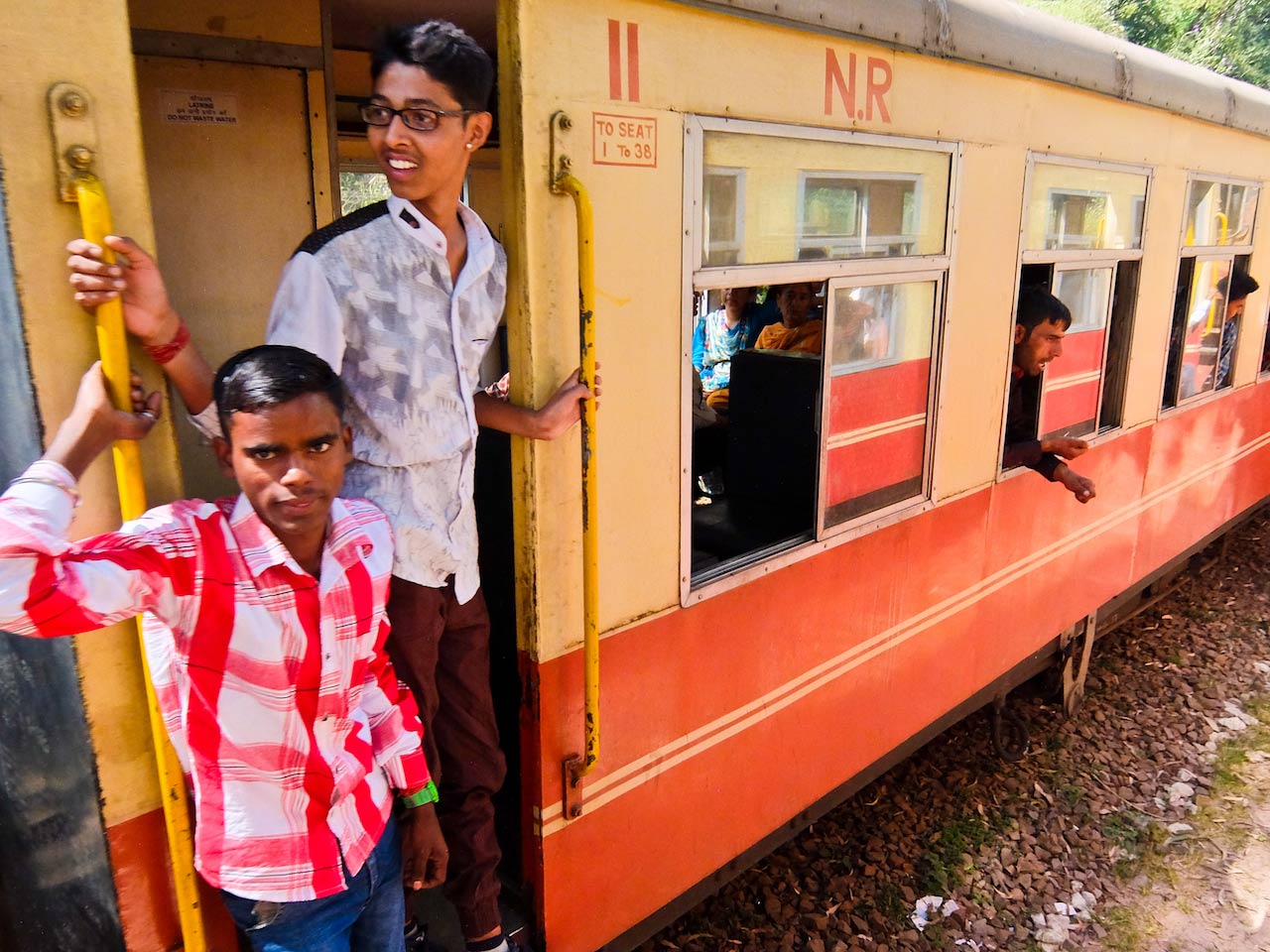 Kalka to Shimla on Himalayan Queen

This is one of the great railway journeys of the world and the line was built to ferry mem-sahibs of the British Raj up to Shimla from Kalka, a cool alternative to the steamy plains below. When the town became the summer capital in 1864, the 1200 mile journey from Calcutta, any combination of horse, camel, elephant, bullock cart or sedan chair took five bone-rattling days. Although the idea for a rail connection was first mooted in 1847, the line was only opened in November 1903. 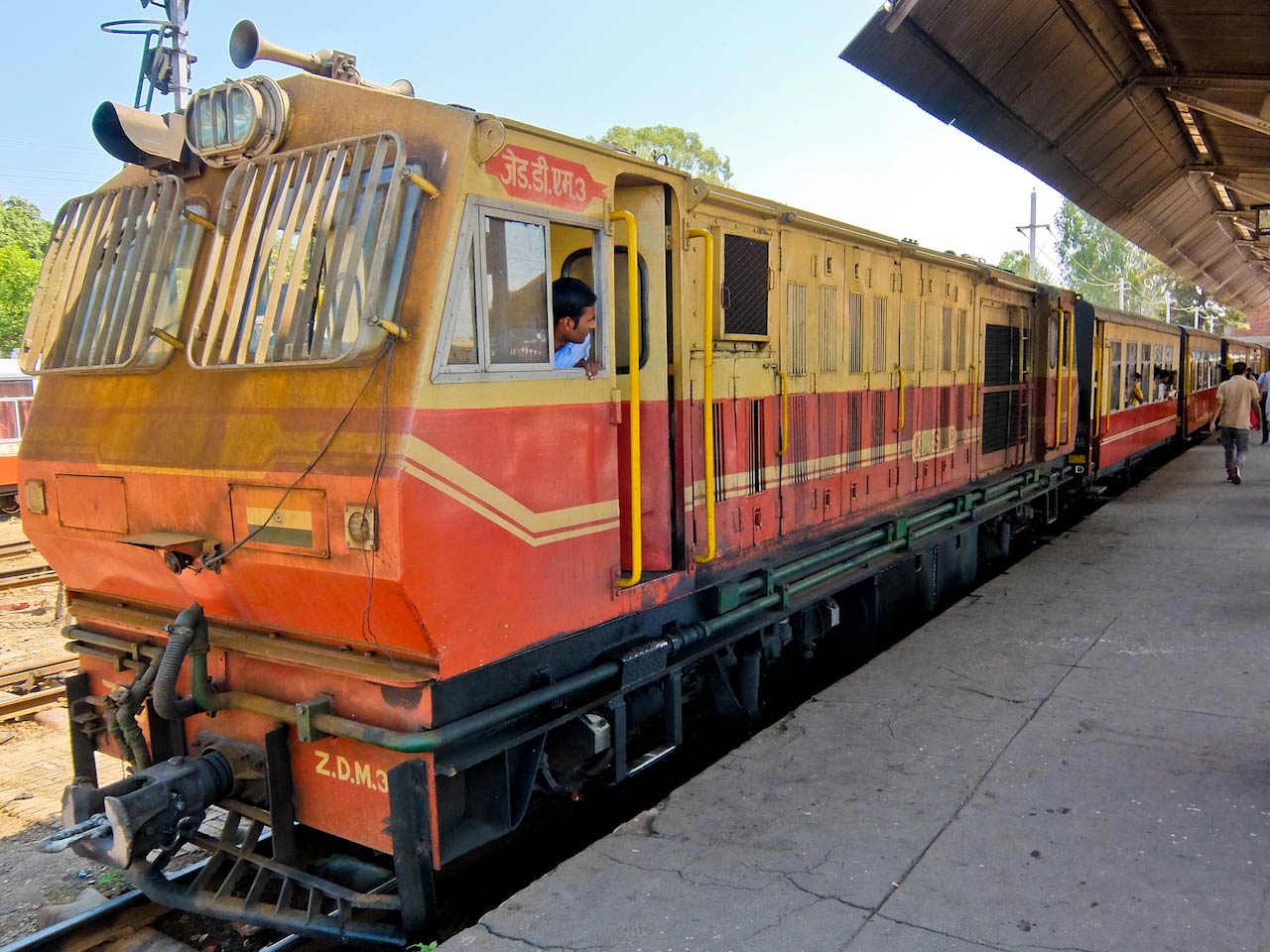 My carriage is packed with other tourists and the train starts climbing immediately, flanked by hills on both sides. I sit by the open window, enjoying the cool breeze and breathing in the smell of the pines as the engine chugs uphill. The average speed is around 11mph but on this stretch it’s much slower. In 20 miles we pass four stations and make our first stop at Dharampur, at 1500m. Everyone gets off to buy chai and samosas from the stalls on the platform. Just ahead I see a cow on the line, just one of the many hazards of train travel in India.

Building the railway was an extraordinary feat of engineering, with 103 tunnels, more than 864 bridges and around 919 curves. The line climbs 1500m from Kalka to Shimla, over a distance of 60 miles, and the train takes around five hours, passing 18 stations. In 2008 UNESCO added it to its World Heritage list along with the Nilgiri and Darjeeling railways. 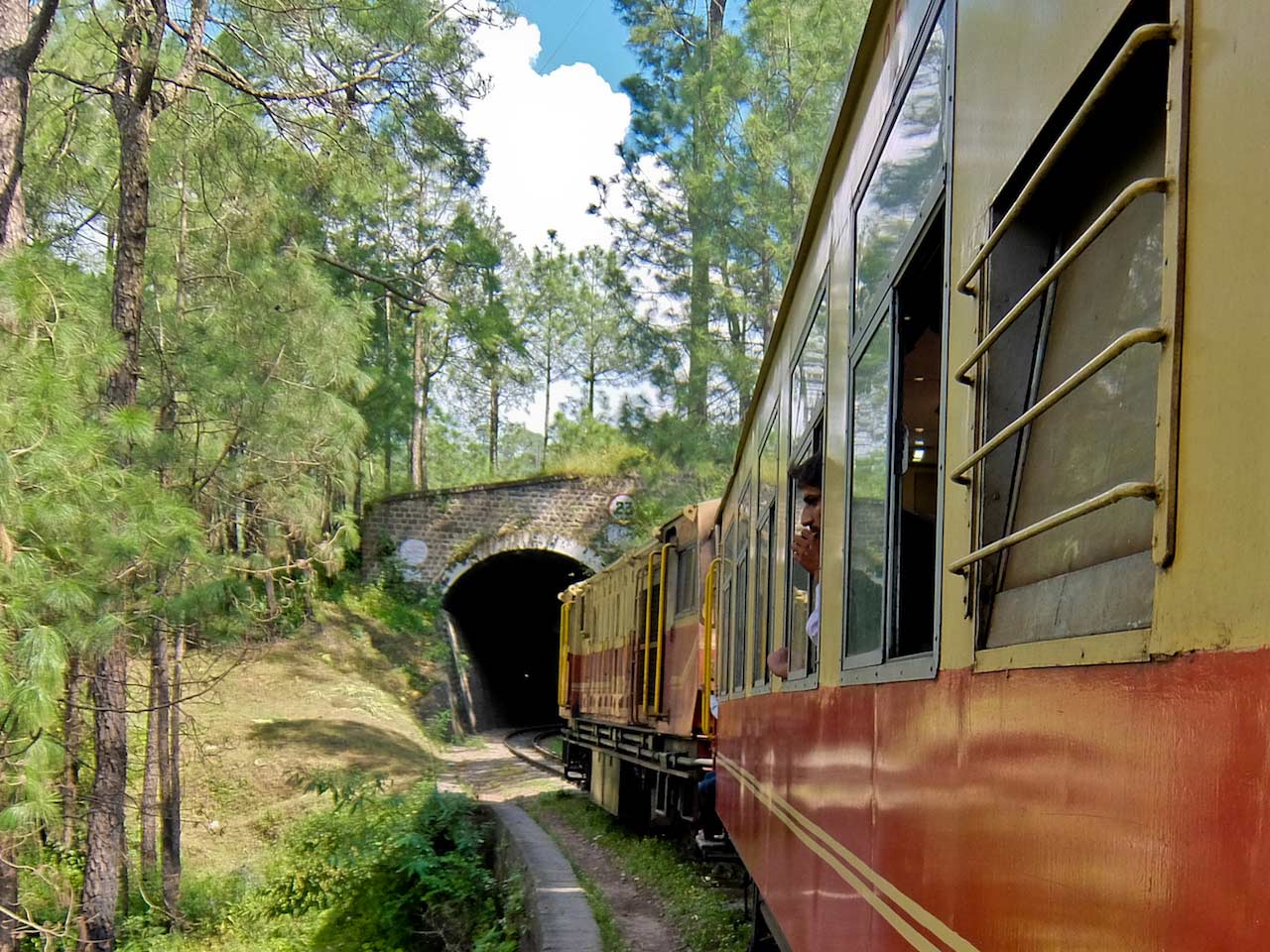 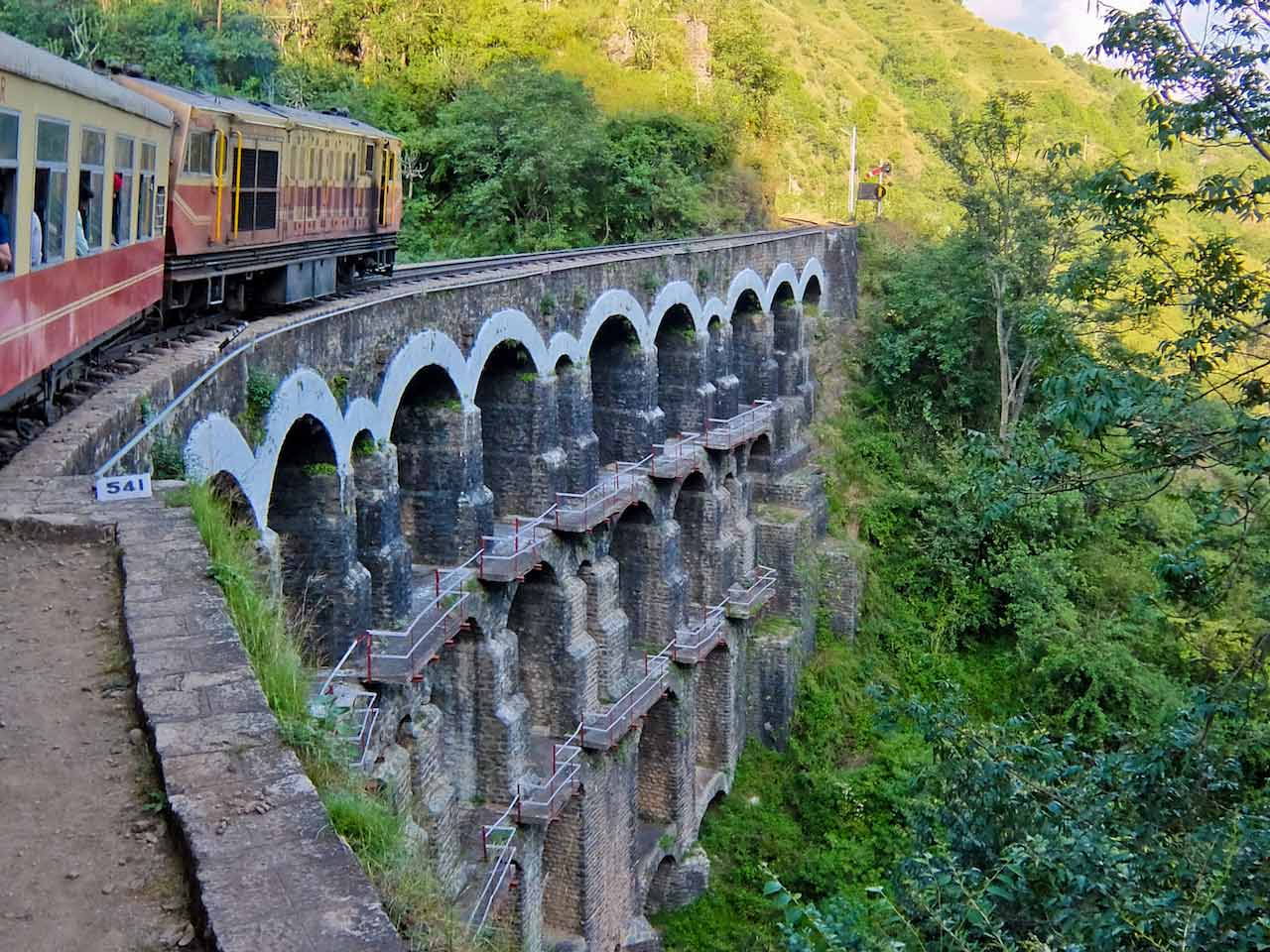 The railway now starts cutting through the landscape in a series of tunnels. The longest is almost three quarters of a mile, just before Barog station. It’s named after the original engineer who decided to save time by digging from both sides of the hill. Unfortunately the two ends didn’t meet so he was fined one rupee and dismissed. Colonel Barog shot himself in disgrace, when walking his dog, and the tunnel was abandoned. For the new one they decided to play safe and employed the spiritual guidance of local guru, Baba Bhalku.

Night is falling as we arrive in Shimla, but I can see the town, much larger than I imagined, sprawling over the surrounding hillsides. Much of this development is recent and the original colonial buildings rise above the station to Observatory Hill.  It’s topped with the Viceregal Lodge, the summer residence of the Indian Viceroy, who ruled the Indian subcontinent, a fifth of the world’s population, from here between 1888 until 1947. 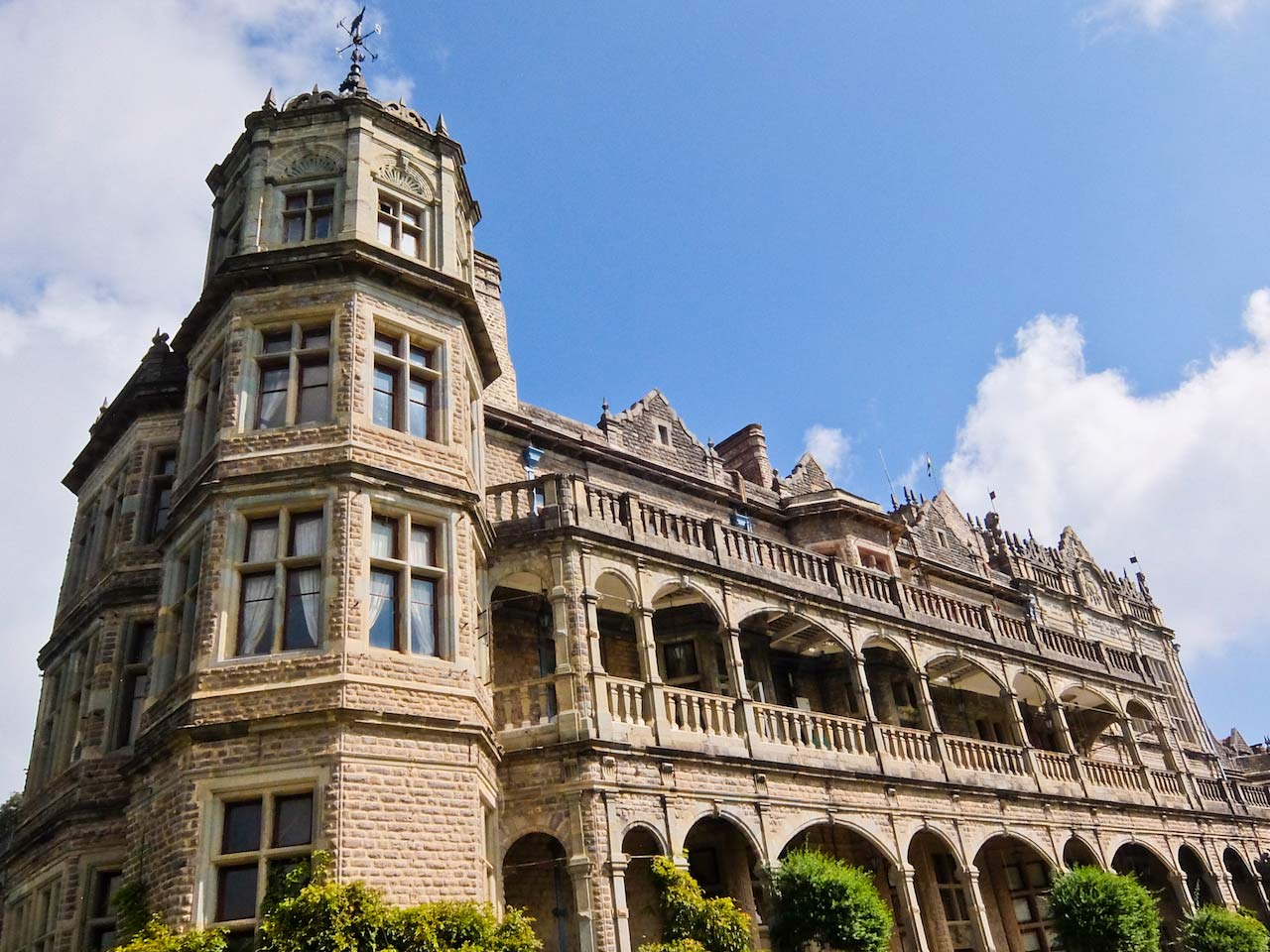 Next morning I climb up to get a closer look. It’s a rather dour mock Tudor baronial castle, all turrets and gables built out of local grey sandstone. It was built to Viceroy Lord Dufferin’s design in 1888 and was meant to remind him of home and impress visiting dignitaries. After independence it passed over to the Indian government, but it’s now occupied by a local university. You can only visit a few of its 140 rooms including the teak panelled central Hall, and there’s an exhibition of old photographs. 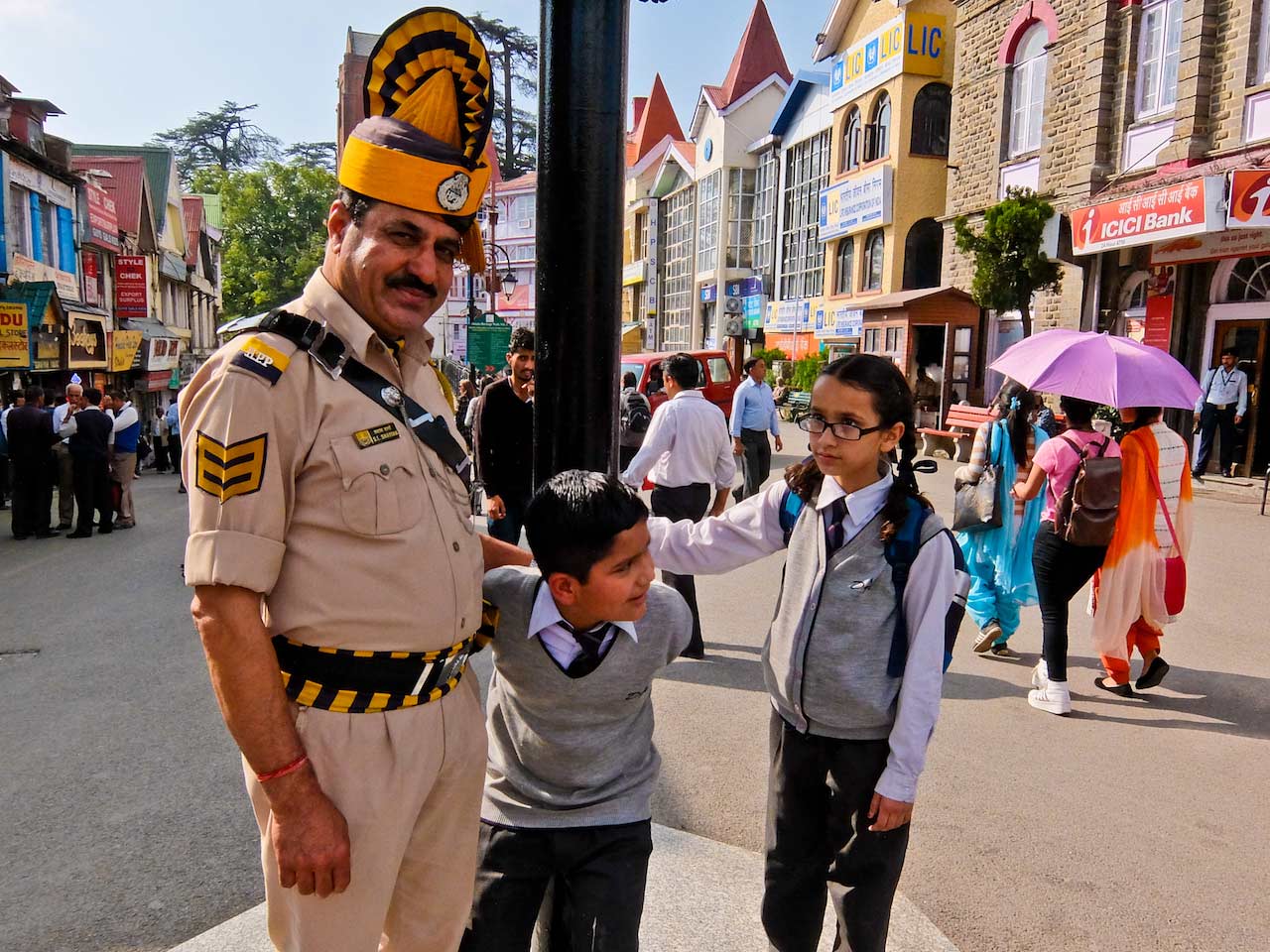 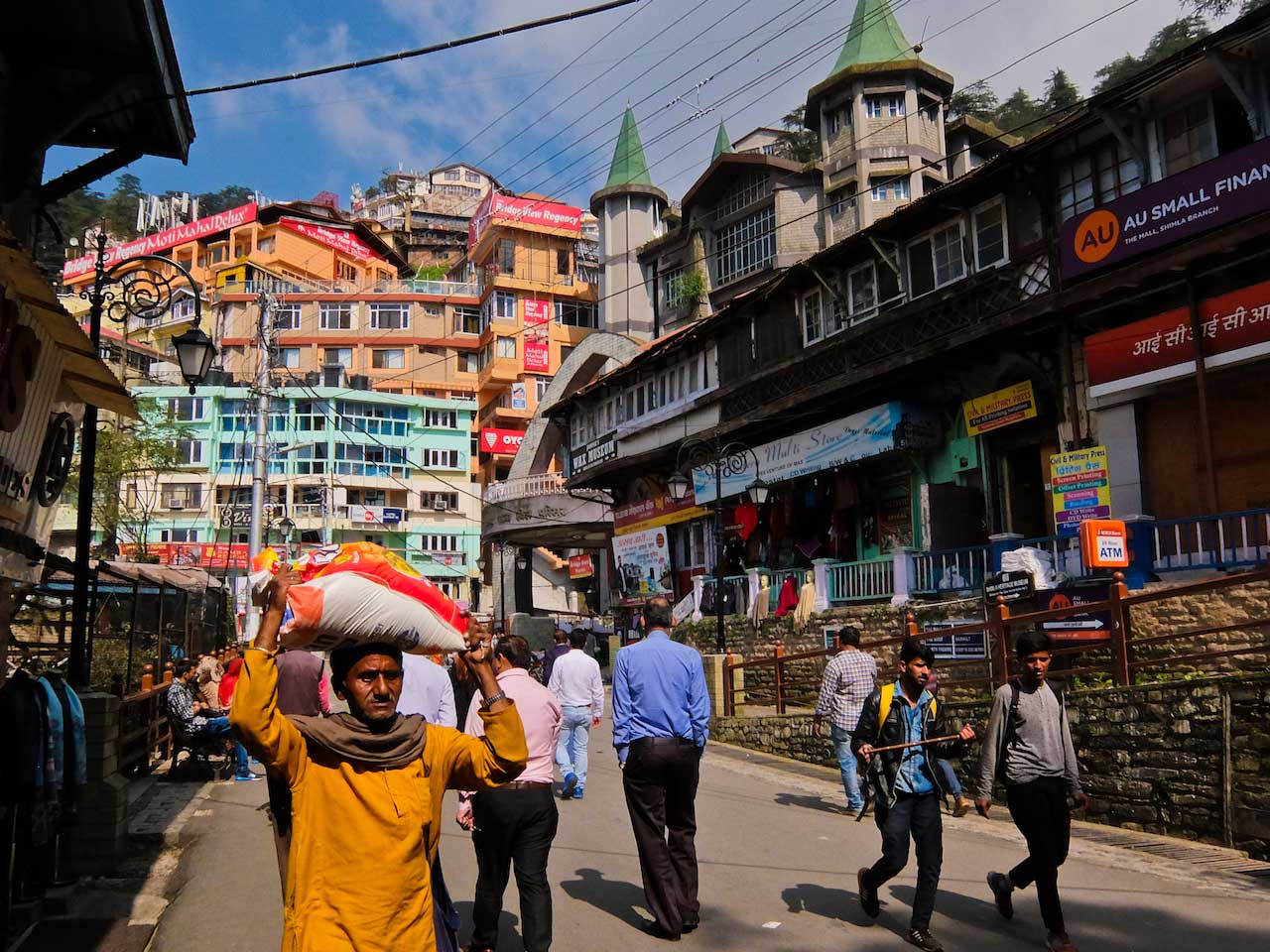 Along the Mall Road, Shimla’s main artery, the 1887 Gaiety Theatre, which witnessed the premiere of Kipling’s first play, has been recently restored and the half-timbered Tudor style Town Hall is also being spruced up. Scandal Point, the main square, where once girls, just out from the UK, made eyes at eligible young bachelors, is still bustling, but many of the old colonial buildings are no more than empty shells. Of course the Raj ended 70 years ago, but its legacy lives on in the Kalka-Shimla railway.

It’s faster to make the descent by road and then catch the train to Agra, 600 miles south, a long day’s journey. Of course we’re here to see the Taj Mahal so it’s up early next morning to see the sun rise over the four- century-old mausoleum. Perhaps because it’s been raining, the crowds are slight, nowhere near what I’d been imagining, although at first light there’s also no sun. 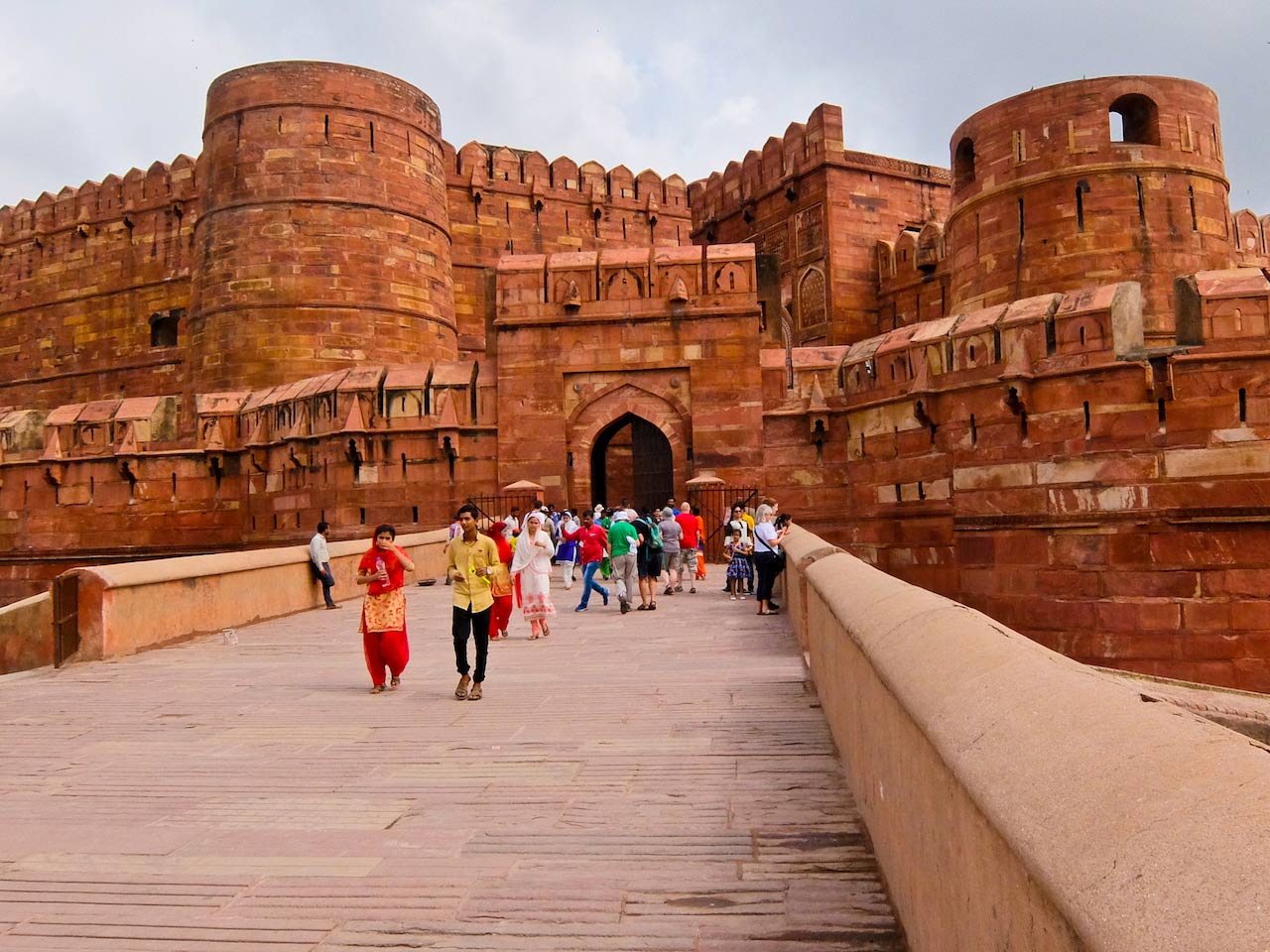 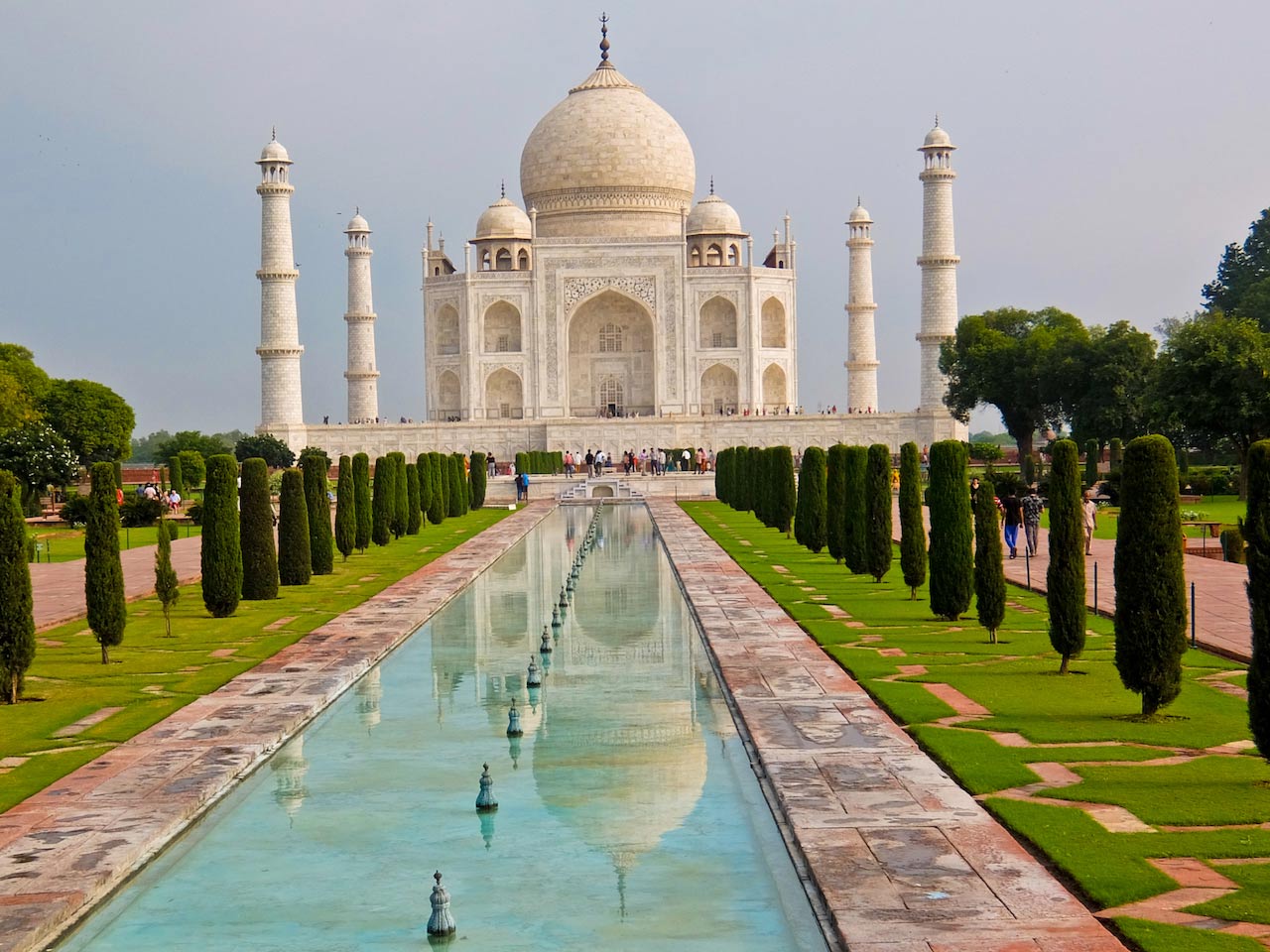 Still the Taj manages to impress, its white marble dome and towers stand serene as the sun finally breaks through. The grounds are extensive and I manage to photograph the famous monument from every angle. The other building to see in Agra is the red sandstone Fort where Shah Jahan, the builder of the Taj, was imprisoned by his son Aurangzeb. For eight long years before he died, Jahan could only gaze from a distance at the monument he’d built to his beloved wife Mumtaz.

Agra to Delhi on the Gatimaan Express 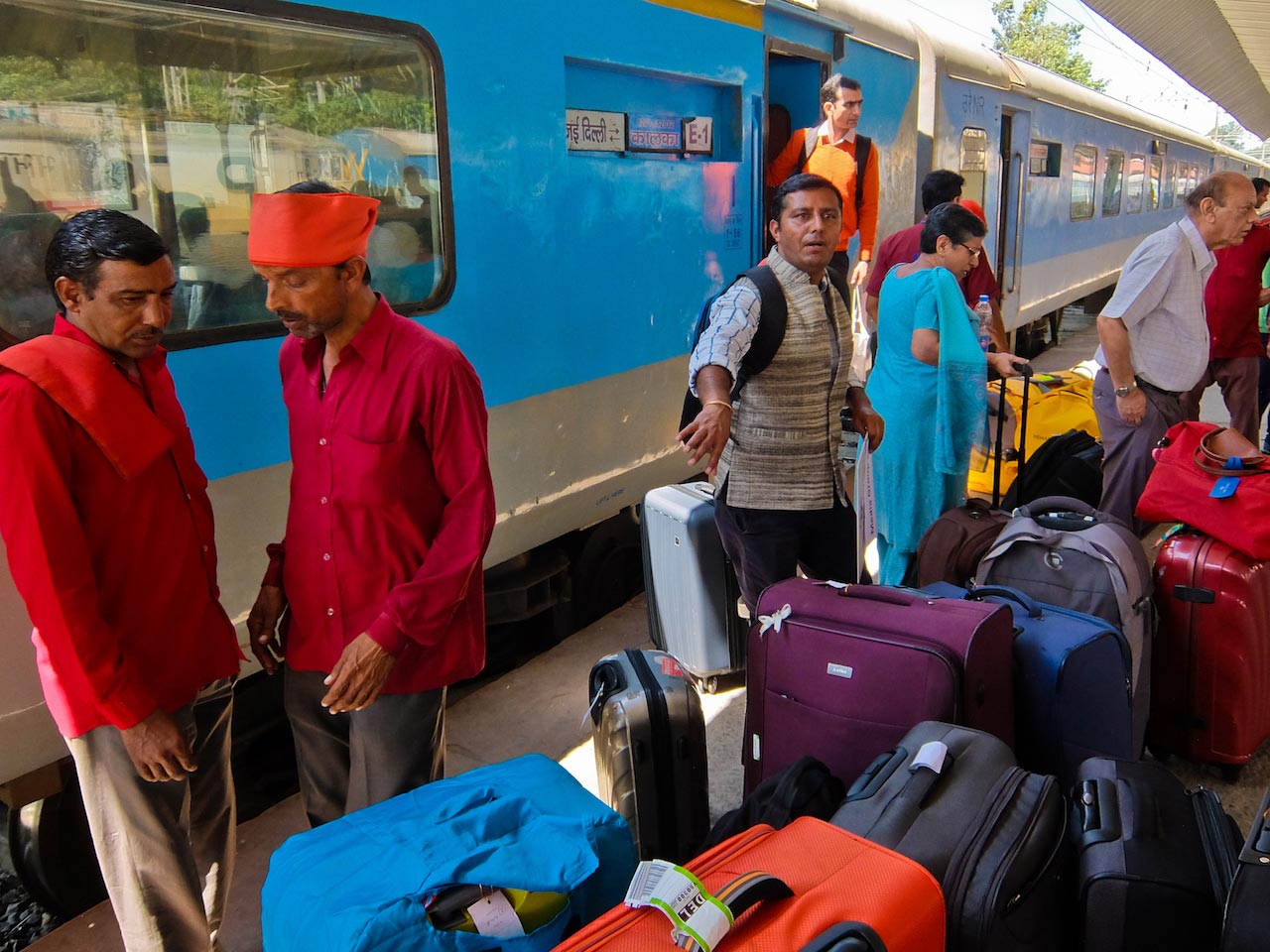 It’s a short 90 minute hop back to Delhi on the Gatimaan Express, India’s first high speed train, before boarding a flight back to London. At the end of my few days, I feel surprisingly relaxed. I’ve travelled here before and the country can be exhausting but, travelling by rail, with everything sorted for you, certainly takes away most of the strain. India is presently in discussions with Japan about updating its railways and it may be that one day those distinctive bullet trains arrive here. Let’s hope the Kalka to Shimla railway remains the same.

This journey can be taken as part of Great Rail Journeys India’s Golden Triangle – a 5* rail 13-day tour which includes the Shatabdi Express and the Toy Train plus excursions to Delhi and Agra with its white marble icon the Taj Mahal. Prices start from £1,995pp, departing Oct 2017 – Dec 2018.

Q&A: What to do on a long stopover in Reykjavik?