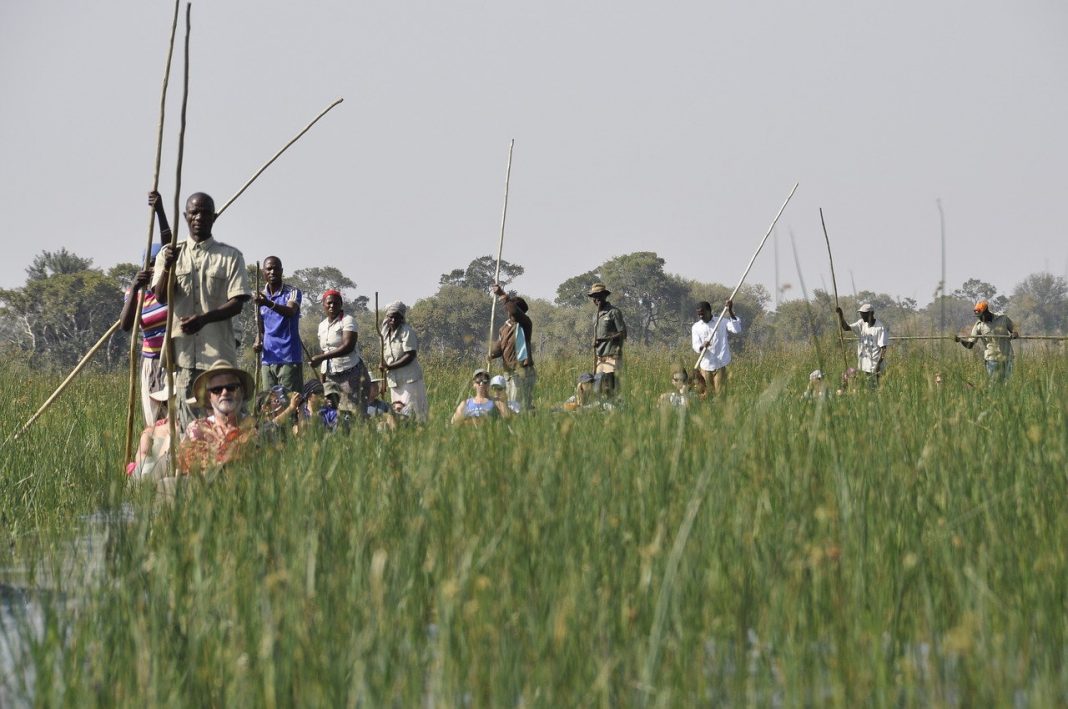 I’m sat with a gin and tonic in hand in the open sided communal lodge in Sable Alley. This is the newest lodge (opened in 2017) within the Khwai Private Reserve.

The scene beyond was of a muddy lagoon with a pod of a dozen or so hippos who were now making quite a racket.

Earlier they were quiet, lounging, semi-submerged in the water. But now dusk was falling, they were stretching their legs and their lungs coming out onto drier ground to graze. I’m on safari without even having to move off the sofa.

It’s a lovely way to start a safari, but it wasn’t all this lazy. In the early morning, I wake just before dawn with a knock on the proverbial door: I’m in a tented suite (a luxurious safari suite built on wooden platforms and with a four poster bed), so there’s no door as such; but my human alarm clock is delivering tea, and for that I’m always grateful.

At home I’d almost never be up this early, but the Okavango becomes exceedingly hot later in the day, so I need to be up and about at daybreak if I’m going to catch a glimpse of the animals before they sensibly retreat into the shade.

The lagoon in front of the lodge doesn’t have a navigable inlet or outlet, so I hop in a 4×4 with Cristina, a retired solo traveller from Spain, and we drive a short distance through the reserve to a point where we can enter the water. Two polers — guides trained and licensed to paddle punt the mokoro (a type of canoe typical of the Okavango) — are waiting for us on the river bank.

In fact boat travel is very much the way to go. The rains from the Angolan Highlands flow from the mountains down the Okavango creating a massive sprawling seasonal wetland. It’s a vast oasis in what would otherwise be desert.

What is a mokoro?

The mokoro is the traditional river craft in the delta. It’s a flat bottom canoe originally carved out from the trunk of a sausage tree, though ours are fibreglass as Botswana’s government has become concerned about the number of sausage trees being cut down.

The poler stands at the back, much as he would do on a punt, and there’s space for one or two passengers inside. In my case, my co-passenger is a cool box filled with thermos flask of tea and coffee, plus a few mid morning snacks.

Safari from the water

We cast off from the riverbank with the slightest of shoves. The mokoro scarcely creates a dent in the surface of the water; it feels as though we’re skimming along on top. This is a good thing as the water level is low — it’s the end of the dry season — and there’s not much depth between us and the clearly visible sandbanks.

Floating along at water level, I’m on par with the water boatmen-like insects flitting across the channels and with the lilac coloured water lilies that somehow remain pristine, regardless of the mud and silt in the river.

Now and then a kingfisher spots a fish and dives straight and fast as an arrow into the water. More often than not, he is unsuccessful in actually catching his lunch, but he’s persistent, hovering 20 feet or so in the air until he fixes on a replacement target. Maybe this time he will get lucky.

The mokoro safari is a sedate way to travel; we paddle along at no more than walking pace. It’s a completely different perspective than that you get when walking as I’m so low down. I cannot see over the reeds and grasses which fringe the channel, and as a result am totally oblivious to the fact that there’s a herd of elephant up ahead until the first of them begins to ford the river.

We wait at a respectful, unthreatening distance, and watch as a dozen or so elephants cross in single file, trunk to tail. One of the smallest calves is up to his armpits in the water, struggling a little until his mother gives him a gentle push from behind.

We continue our journey once the elephant have passed, pulling up at a bend in the river. I clamber, slightly wobbly, ashore, and as I do so, spook the handful of flighty impala nearby. They’re skittish at the best of times, and especially when they are with their young. But if you can get close enough to see them properly, they have the most beautiful, delicate markings.

The sun is already much higher in the sky, and though the heat of the day is not yet searing, the polers still set up the tea table in the shade of a sausage tree. There are buffalo grazing a short distance away, and every now and then a giraffe saunters into view gazing lazily at the scene ahead.

If there is another group of people in the Khwai Private Reserve today, they must be miles away. I’m in a watery Eden, and its a pristine wilderness.

Getting there: Flights from London are via Johannesburg to Maun (Botswana). The shortest route is with South African airlines – they have recently launched the new Airbus A330-300. From there catch a charter flight with Mack Air.

Accommodation: Sable Alley, Khwai Private Reserve, Accommodation is in luxury tents constructed on wooden stilts. They have uninterrupted views of the lagoon where hippo, elephants and buffalos come to drink.

Tip: You tend to get quite close to the animals, but keep binoculars (you can borrow them there) to spot the birds.