London bustles with vim and vigour and Britain’s capital city may well be one of the world’s most visited. Visitors are drawn in by eclectic entertainment from theatre and comedy to jazz, a foodie scene that showcases the world’s gastronomic delights and a millennia of history that talks elegantly through its architecture. But you have to be in the know to truly appreciate its finest monuments, its Romanesque heritage and the way religion and politics have shaped modern London life. And this is especially true for first time visitors.

So, I downloaded the London Monument Tracker app (read my review here) and chose At the heart of Royal, Religious and Politican Power self-guided tour. 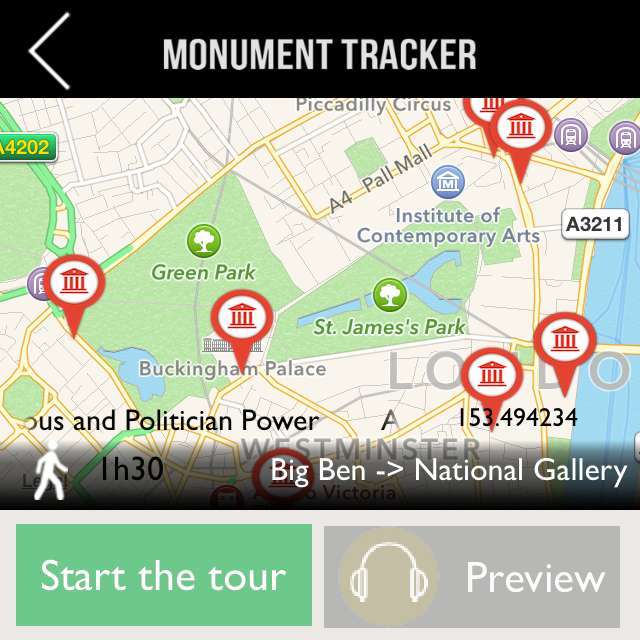 The tour starts at the iconic Big Ben with the words:

Let’s get one thing straight, Big Ben is the name of the clock. This clock, which you may admire when walking along the Thames, must not be confused with the tower on which it stands, a tower nowadays known as the “Elizabeth Tower”.

The tower and its clock have been part of the London life for more than 150 years. […] Originally, the Westminster Palace did not have a bell tower. It was only after the infamous 1834 fire that the man appointed to rebuild the palace, Sir Charles Berry, decided to add a 96.3 meter high bell tower to the building. [download the app for more]

Tip: if you don’t have to wait too long for the clock to strike the hour, it’s worth hanging around for a few minutes, as the chimes every 15 minutes are given by four smaller and less audible bells.

Nearby is Westminster Palace, a former royal residence but now the seat of the Houses of Parliament (the House of Commons and the House of Lords). This is what Monument Tracker has to say about it:

Throughout the Middle Ages English Kings did of course not live in Buckingham Palace but in Westminster Palace (also known as the Houses of Parliament). Following a fire in 1529 Henry the Eight (who reigned from 1509 to 1547) left his palace in Westminster and settled just up the road a couple of hundred metres in Whitehall.

The palace of Westminster remained after that a bit of a backwater until it was totally destroyed in October 1834. […] When it was decided to rebuild the palace Sir Charles Barry chose the neo-gothic style we see today for the reconstruction.

The Westminster Palace still hosts the Parliament (House of Lords and House of Commons), after having accommodated all parliamentary sessions of the kingdom since the middle ages. Edward the Confessor built the palace subsequently inhabited by William the Conqueror who fortified the building. [download the app for more]

Tip: Parliament is open to all UK and overseas visitors to attend debates and watch committee hearings. Guided tour costs £25 and audio tour is £18.

The Royal family have always taken centre stage in British life and it was at Westminster Abbey, affectionaly known as “coronation abbey”, where monarchs were crowned and, incidentally, where Prince William married Kate Middleton recently.

But do not confuse the Abbey and the Cathedral! Westminster Abbey broke away from the Catholic religion in 1540, when Henry XVIII founded the Church of England, while Westminster Cathedral is the home of the Catholic Church in England and Wales.

The original Westminster Abbey was built during the 10th century – when the Roman Catholic authority was still recognized in the United Kingdom.

When William the Conqueror arrived on the scene he chose this sacred location – which had just received the blessing of Edward the Confessor – for his own coronation on Christmas day of 1066.

Westminster Abbey is also an important Royal necropolis and 3000 people are buried there. Amid the royal graves there is a “poets’ corner” where  the likes of Dickens and Shakespeare are interred. [download the app for more]

From Westminster Abbey, Monument Tracker routes leads to Victoria Street. Slightly hidden from the main road, it’s easy to miss Westminster Cathedral. John Betjeman called it “a masterpiece in striped brick and stone in an intricate pattern of bonding, the domes being all-brick in order to prove that the good craftsman has no need of steel or concrete.” Monument Tracker describes it as:

Made of red bricks as to comply with the neo-Byzantine style, the Cathedral was ordered in 1895 and completed in 1903.

The cathedral comprises both byzantine and medieval Orthodox architectural elements that are common in Europe. Many domes, mosaics, column galleries and polychrome marbles were chosen by architect John Bentley to give Cathedral an imposing beauty.

Sculptor William Brindly sourced more than a hundred different kinds of marbles from 24 countries to be used in its constructed. He was so diligent in his quest that he was even known re-opened ancient quarries. [download the app for more]

Ten minutes away is Buckingham Palace, home to Queen Elizabeth. It started life as a townhouse built for the Duke of Buckingham until George IV, who was king between 1820 and 1830, who transformed it into the palace. As I waited with dozens of other tourists for the Changing of the Guard (daily during the summer months; every other day during the winter), I checked the history of the Palace using Monument Tracker. Interestingly:

Queen Elizabeth II in fact still uses the palace’s premises to fulfil her duties as the head of the British state and as head of the Commonwealth. Nevertheless, it is crucial to recall that she is NOT the owner of the palace. In fact, the palace (along with the whole of the arts collections that it contains) belongs to the British public.

Next stop was Wellington Arch, built between 1826 and 1830 by George IV to celebrate the 1815 victory against Napoleon Bonaparte.

The Duke of Wellington was initially honoured according to the installation of an equestrian statue of himself under the Arch. The statue however only elicited horror within the Kingdom, Queen Victoria having for instance been horrified by its size.

Did you know that the Arch was-until 1992- the home of London’s second smallest police station?
A museum tells the Arch’s story. It is possible to dine and hold a personal celebration Quadriga Gallery.

Tip: the two balconies located under the bronze sculpture offer an exceptional panorama of the Buckingham Gardens, Westminster … and Big Ben.

The app took me back through Green Park, passed Buckingham Palace and across St James’s Park to Trafalgar Square, another monument commemorating Britain’s victory over Napoleon (Battle of Trafalgar which took place on 21 October 1805 off the coast of Cape Trafalgar, Spain).

Trafalgar Square is immediately recognisable with Nelson’s Column at its center, guarded by four lion statues at its base. It is London’s greatest and largest square.

The admiral’s sculpture, which is perched at 40 metres above the ground, dominates the city. According to historians, the sculpture has been erected to this particular height in order to enable the admiral (or better said what is left of him) to supervise his Portsmouth based fleet.

Right next to Trafalgar Square is The National Gallery. This is the last stop on the itinerary and a perfect occasion to end the tour immersed in a collection of over 2,300 paintings dating from the mid-13th century to 1900.

Seeing that “Le Louvre” and the “Gallerie des Offices” made the glory of the French neighbour, King Georges IV – king from 1820 to 1830 – decided that is was about time for his great nation to finally open an Art Museum worthy of the name and worthy of the United Kingdom. Accordingly, the National Gallery opened its doors in 1838.

The museum’s exhibition area is today equivalent to approximately 46000 m². The immense museum is the home of 2300 works painted between the Middle Ages and the late nineteenth century. The world’s greats – such as Giotto, Renoir, and Rembrandt – are exposed there. You will however also be able to contemplate the works of English painters such as Constable, Turner or Gainsborough.

Oh and remember… admission is free! [download the app for more]

London Monument Tracker is available for all platforms on App Store and Google Play:

Disclaimer: We were recompensed for our time in testing London Monument Tracker.