This is the most technologically advanced ship ever to sail

One of the pleasures of cruising is the stress-free way you wake up to a new port of call each day. All you have to do is wake up.

Yet the experience is not completely plain sailing. Checking in before boarding can take an age because passengers arrive en-masse. And once in, it takes another age before your luggage arrives in your stateroom. It’s enough to tie anyone up in knots.

But help is ahoy. Royal Caribbean International has announced plans to reduce check-in time for its two new ships: Quantum of the Seas due to be launched in November and Anthem of the Seas in April 2015 from Southampton. 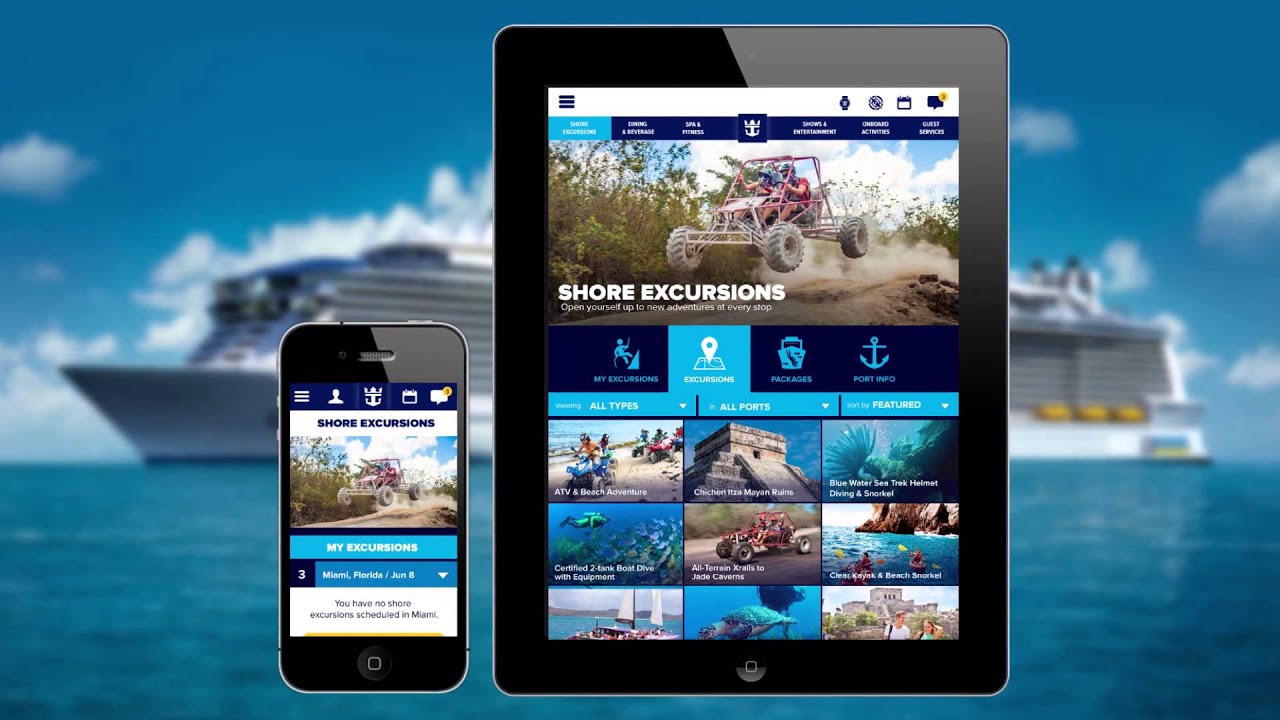 Check-in will be done online before arriving at the port and you can upload a selfie as their onboard security photograph. By the time you arrive at the cruise terminal for departure, you can go from “shoreside to ship” in 10 minutes with no check-in counter to navigate and no lines to stand in. 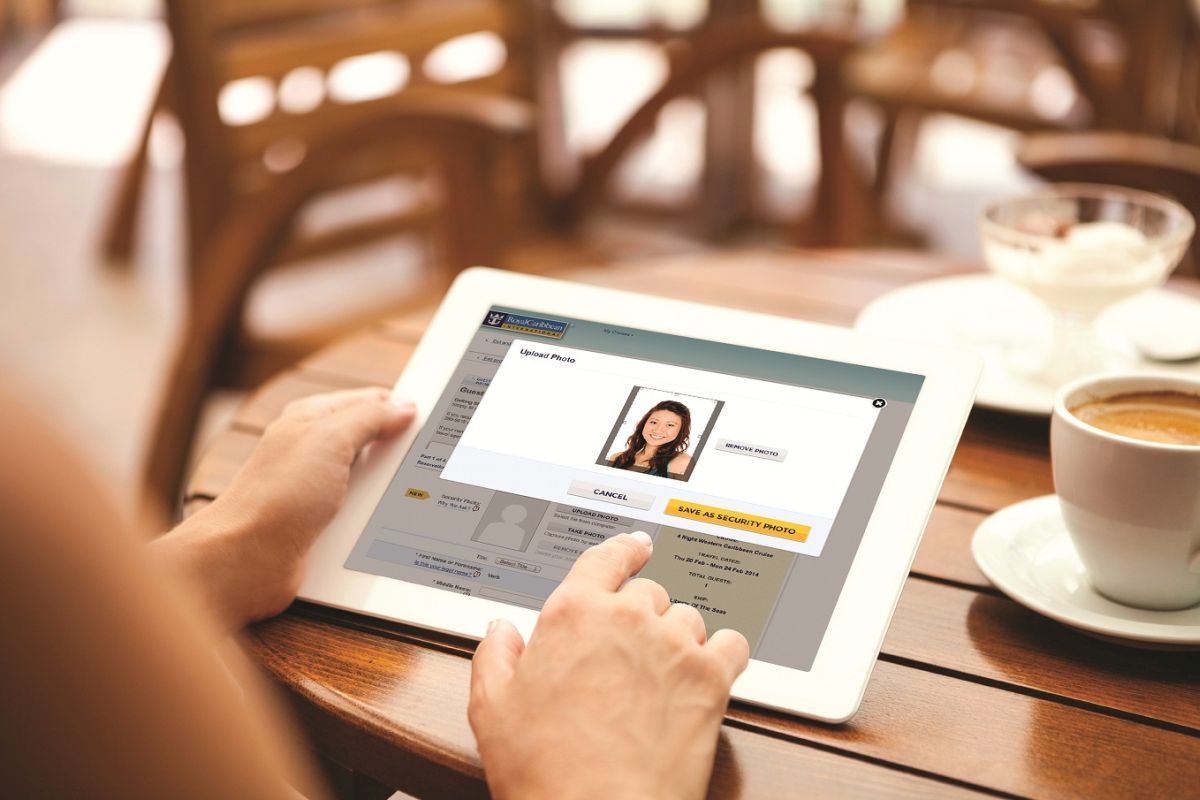 Check-in will be done online before arriving at the port and you can upload a selfie as their onboard security photograph.

The usual extended wait for luggage to arrive at your stateroom will be eased thanks to an RFID tag that is placed on the bags which is trackable by an app and online.

RFID technology will also be used in new WOWband wristbands. These are used as a room key and payment tool, which can all be linked to the Smart Concierge app where passengers can look over and change their restaurant reservations or activities. 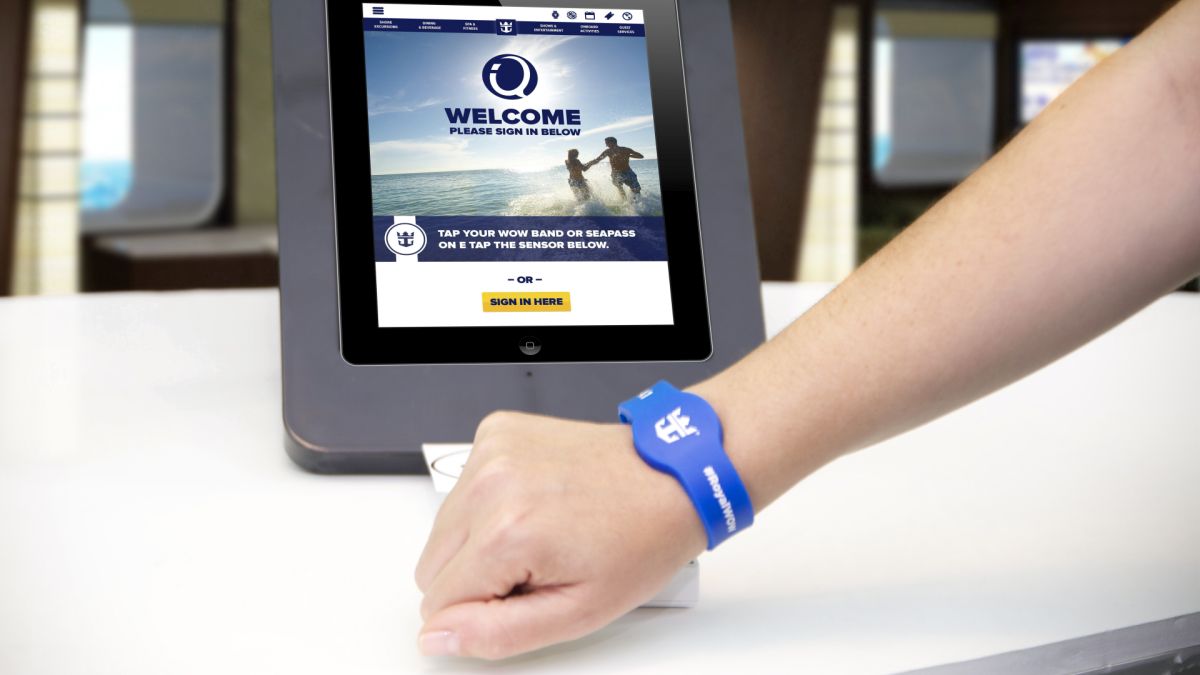 Quantum of the Seas RFID WOWband wristbands, which require a simple tap to navigate the ship, make onboard purchases, serve as the room key and more.

Another app, named Royal iQ, will mean passengers can call or send SMS text messages at a cheaper rate. Internet speeds will be improved through a partnership with O3b Networks, whose satellites will beam WiFi directly to the ship, making internet connectivity almost as good as the one you experience at home and certainly more than on any other cruise ship in the world. This means that even though you are sailing the seven seas, you can still play Xbox Live with other gamers around the world. 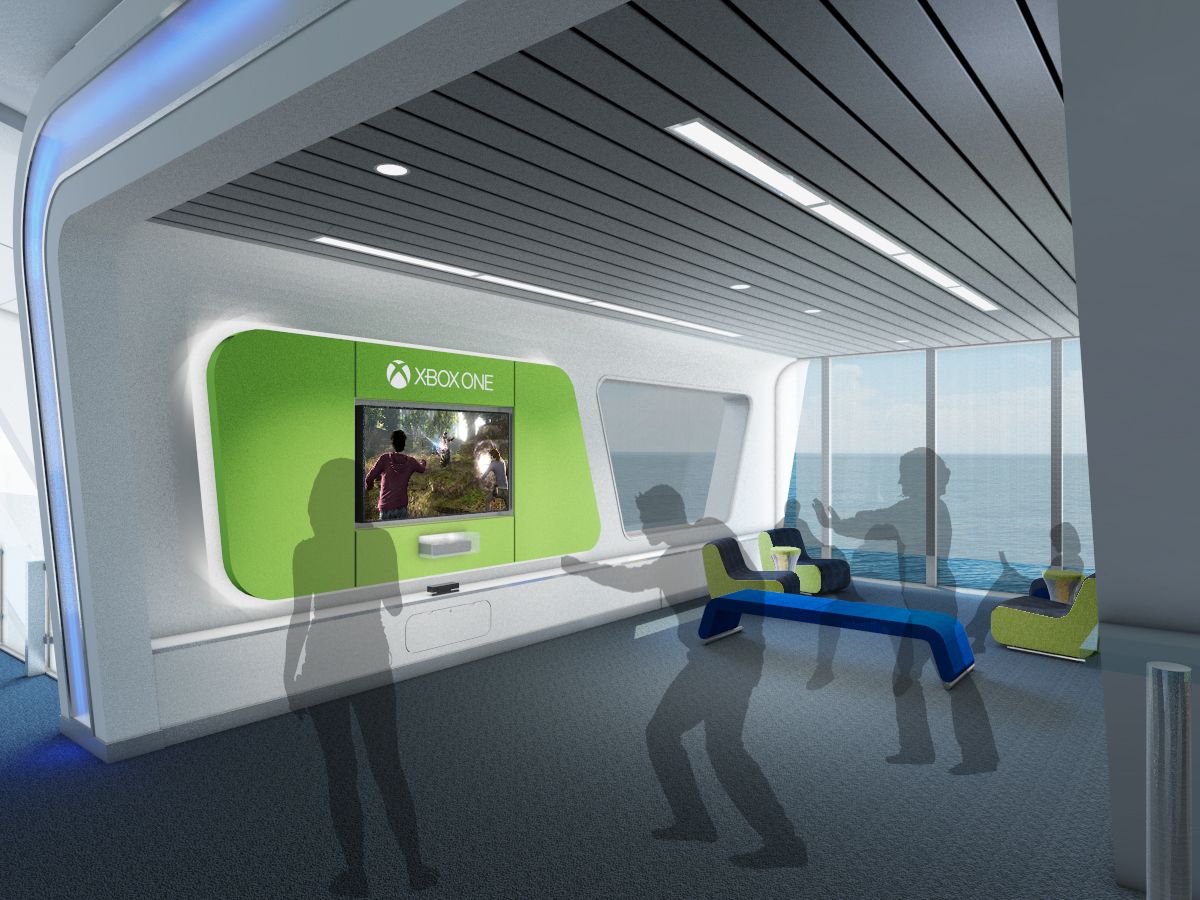 Even though you are sailing the seven seas, you can still play Xbox Live with other gamers around the world.

But there’s more. The digital revolution will unfold shipwide with high-tech movable ‘Roboscreens’ and digital shows. Traditional stage shows will still be put on but alongside several technological developments that use special effects.

The Two70° stage will feature 18 projected screens that create a space covering 100 feet wide by more than 20 feet tall. The 12,000 resolution screens will offer a 270-degree background to dancers, singers, aerialists and musicians.

The venue is also home to six Roboscreens: screens that are twisted and moved by robotic arms either alone or together. 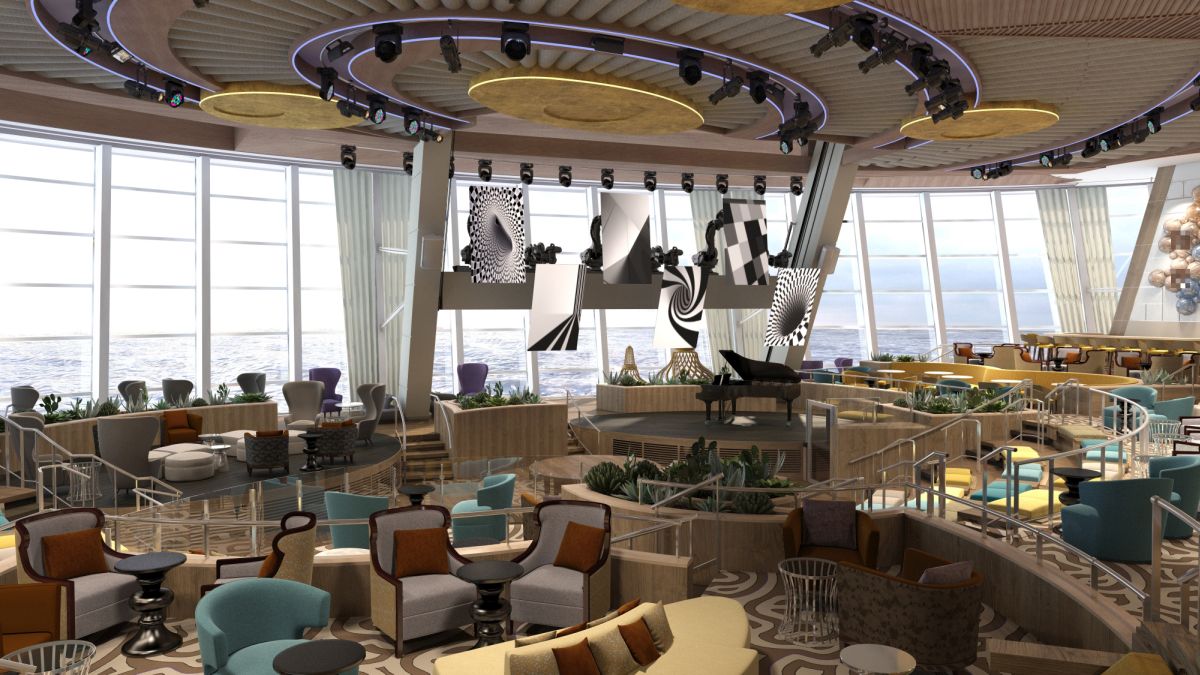 Roboscreens: screens that are twisted and moved by robotic arms either alone or together.

Other entertainment venues include the live music venue Music Hall that will feature bands, DJs and themed party nights; the main Royal Theater that will host hit musical MAMMA MIA! and the Sonic Odyssey show that uses unusual instruments.

Away from screens and shows those with the adrenaline junky gene can try Ripcord by iFLY, a heart-pounding skydiving experience; or the North Star, a thrilling ride that transports you more than 300 feet in the air on a breathtaking journey. Otherwise there’s SeaPlex, the largest indoor sports and entertainment complex at sea with bumper cars and roller skating.

Of course, true to form, food is on the entertainment menu across 18 concept restaurants including those created in partnership with celebrity chefs Jamie Oliver, Devin Alexander and Michael Schwartz.

And when you are ready for a drink you can head to the Bionic Bar. Order your drink via a tablet and robotic bartenders will serve you. Bionic Bar is the first of its kind, not just at sea, but anywhere in the world. 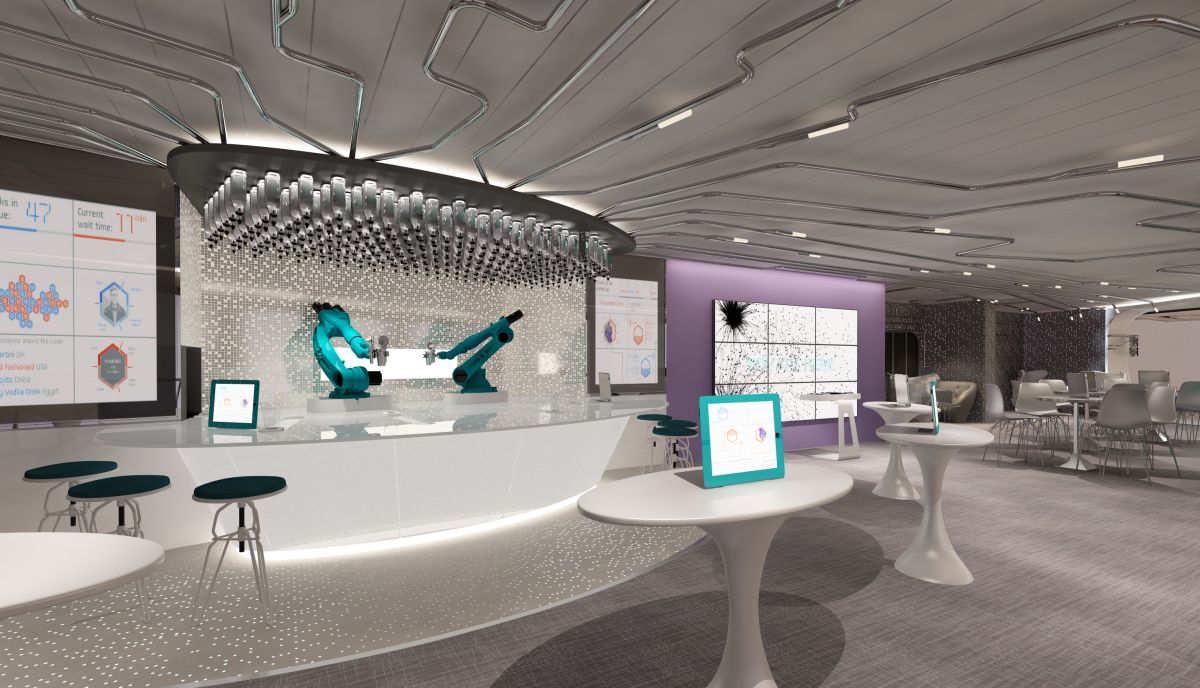 It is a must-try interactive experience where you can have fun watching the robotic bartenders hard at work mixing and delivering your cocktails. Perhaps it won’t just be your Martini that’s left stirred and shaken.