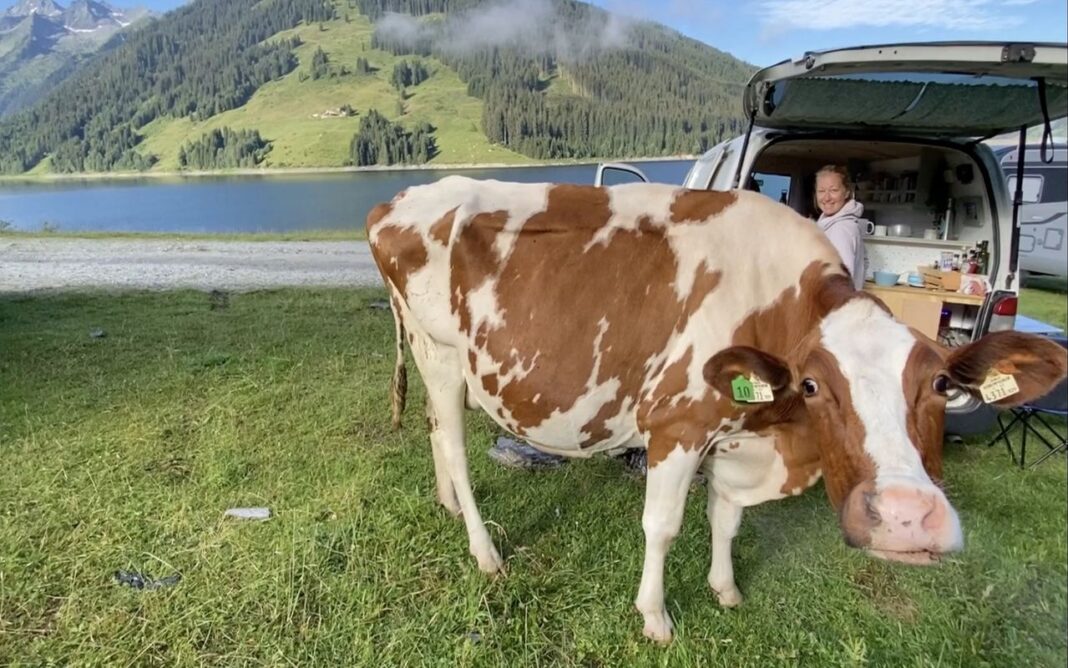 We had heard that Austria was going to be a tricky beast to get into because of COVID, but the potential embarrassment of being turned away from the border because we were from England was not enough for us to abandon hope.

As it happened, after a very cordial chit chat and a quick appreciative search of our self converted camper van by the border guards, we were waved on through. Amazing what some pine panelling and pretty stencilling inside an old van can do for international relationships. Boris, pay attention.

As we had no real idea whether or not we would be allowed into Austria, we had not made much of a plan. We did, however, know of a small town nestled between two villages called Hucking and Franking on the other side of the country, that we definitely wanted to head towards, but to spare blushes so soon in this article, more about that later.

Apparently, we missed some quirky tourist spots – a church spire half-submerged into a lake, a few mountain hikes, that kind of stuff. Not to worry though, waterfalls are always a big hit.

Krimml waterfall does not disappoint. It is magnificent, with rainbows literally firing from its base. Nestled in a pine forest falling from the side of a very tall, dramatic mountainside,

The walk to the top was a funny one, and quite unlike any hike we had enjoyed since the start of COVID; it was very busy.

Hundreds of people hiking the 400 or so meters to the top. Puffing and panting, it did feel a bit strange, certainly nothing at all like Boris’ new normal, this was the old normal. We cherished the Austrian balance.

So Krimml wasn’t just a waterfall, it was a feeling of normality and the first hints back to a feeling of freedom.

From Krimml, we bounced around a bit. Austrian roads are great to drive, and around every single turn is another spectacular view. A winding river, a waterfall, a mountain, a cliff face, a blue sky. Wonderful.

The beauty of this life in a van is that home is where you park it. Continuing to head north towards our ultimate prize, we parked for a couple of blissful evenings next to a lake where we enjoyed breakfast with a herd of cows, and headed out for beautiful hikes in the local countryside.

Travelling this way, we really cherish the opportunity to dictate our own direction and explore areas most others do not, or cannot. On one particular lakeside day, we wandered off following a local lady with hiking poles who had just parked next to us, she looked ready for a serious walk, and so were we.

A field of Marijuana

Striding out of the car park, we kept one eye on our unsuspecting guide, and to be honest probably more than one eye on everything else. Soon lost, and delighted by the prospect of not knowing where we were, we stumbled upon a very unexpected field of marijuana. Now, that’s not something that happens every day, and if you ever read Alex Garland ‘The Beach’, stumbling on a field of weed might not be the healthiest thing you ever did, and not because of the smoke.

Google to the rescue. Where are we? That reassuring little blue dot pops up and we are just a few miles from the van. Translate, Austrian to English, “this is a hemp farm, and these leaves are for medicinal purposes” the sign reads, and it has a nice nod to the EU which feels weird, so we both wink at each other and turn to the blue dot for an exit.

This was our ultimate Austrian goal. To drive from the southern Austrian border to Germany via a road filled with intrigue and, let’s be frank, perplexingly named villages.

Hucking and Franking. Yes, it’s true that in northern Austria there are towns that sound like a word that describes copulating.

And then there’s fucking.

Hucking and Franking. Yes, it’s true that in northern Austria there are two alpine jewels that sound like a word that describes copulating. And then there’s Fucking (pronounced “fooking” and rhymes with “booking”).

Yet despite its shocking name (for Brits), it’s a pretty nondescript, little town in northern Austria, nestled between its slightly less eyebrow-raising neighbours Hucking and Franking.

The village signpost has been stolen so many times (by British tourists, of course) that it prompted a town meeting about the possibility of changing the town’s name. Instead, they decided to remain as Fuckingers and welded the sign to the post that holds it, which in turn has roots to the centre of the universe. It’s going nowhere.

Standing taking a selfie at the sign is an absolute (if not slightly awkward) must do, and as we stood there at the edge of this small village in the middle of nowhere Austria, a car drove past and papped its horn at us, no doubt frustrated that another tourist had come to take another stupid photo.

Then a young girl with a dog approached us, I used another swear word not signposted, and said to Tara “we should leave.” Turns out the girl was local, from just five minutes down the road, and wanted her own photo. All great fun.

So that’s our trip to Austria. With a list of missed tourist sites that were replaced by serious surprises in one of Northern Europe’s little alpine jewels. Great driving, a field of weed and a village called Fucking. Pretty difficult to beat that one.

More about John and Tara: