These days many people’s experience of photography is limited to snapping selfies on their phones. Imagine if you’re given a full sized professional camera and taught how to use it.

Even better, set out on an African safari and get so close to the animals that you can’t fail to get good shots. Of course it also helps that there’s always a tutor on hand to prevent you pressing the wrong buttons.

I start my Pangolin Photo Safari in the Okavango Delta. Getting there involves flying from Johannesburg to Maun, then transferring to a smaller 12 seater plane and crossing the Delta to land on a makeshift airstrip near the village of Khwai. It’s then a bumpy ride in a bush vehicle to Pangolin’s lodge.

This really is the middle of nowhere where villagers still risk life and limb, venturing out into the bush, to cut the grasses. They sell them for thatch, earning money to buy school books and uniforms for their children. I bump into two of them as I set out in the late afternoon. They’re on their way home, but sometimes they don’t make it.

This is lion country and I’m whisked off to see a big male and smaller female waking from their afternoon nap. They’re hungry so we watch them stealthily stalking an impala. 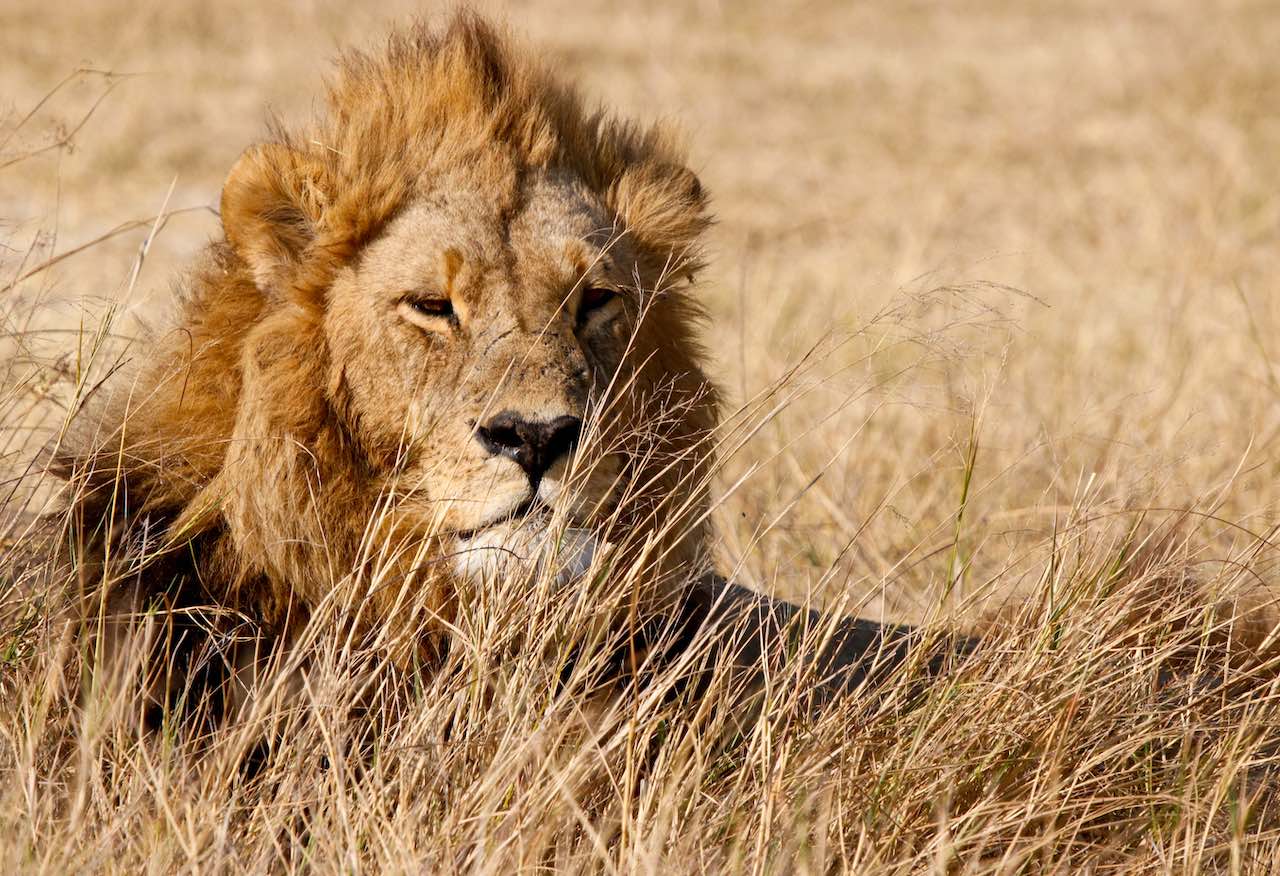 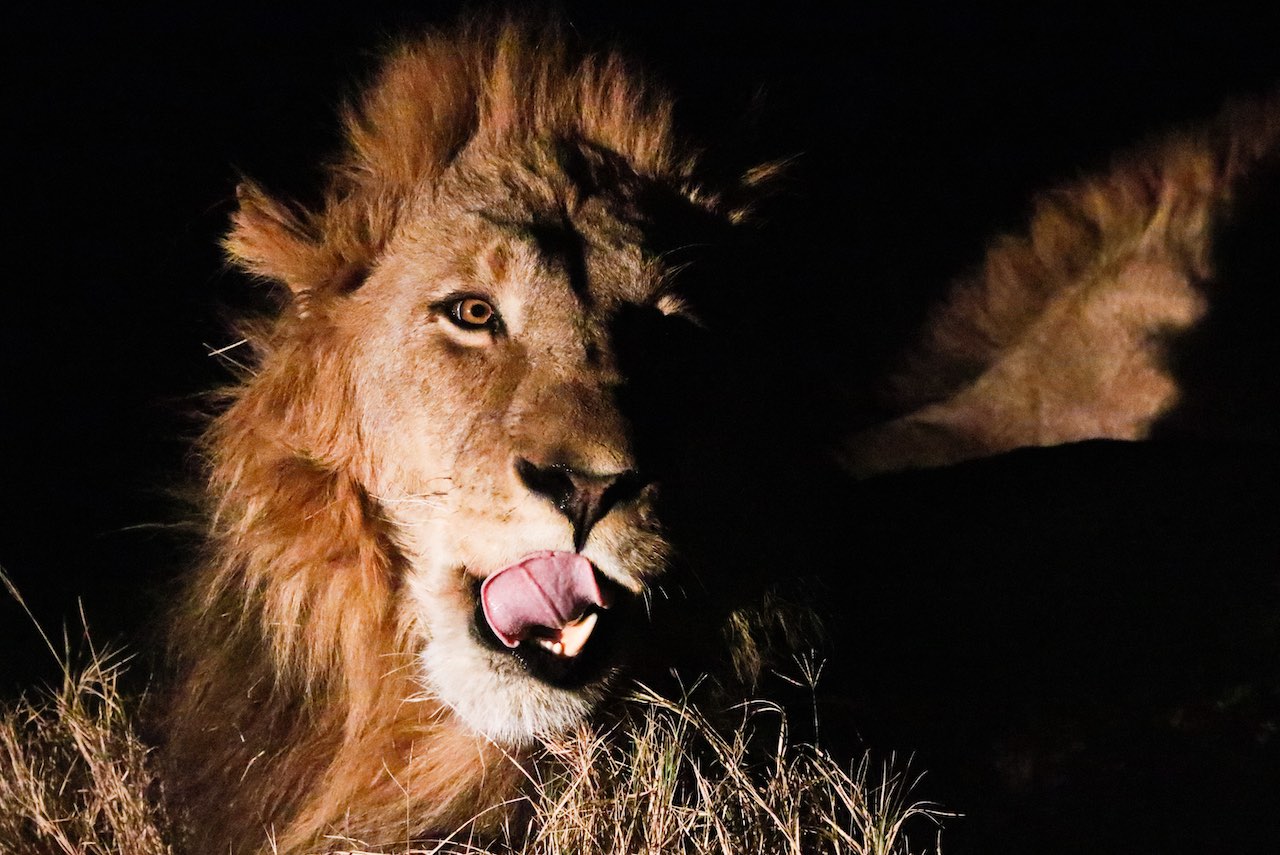 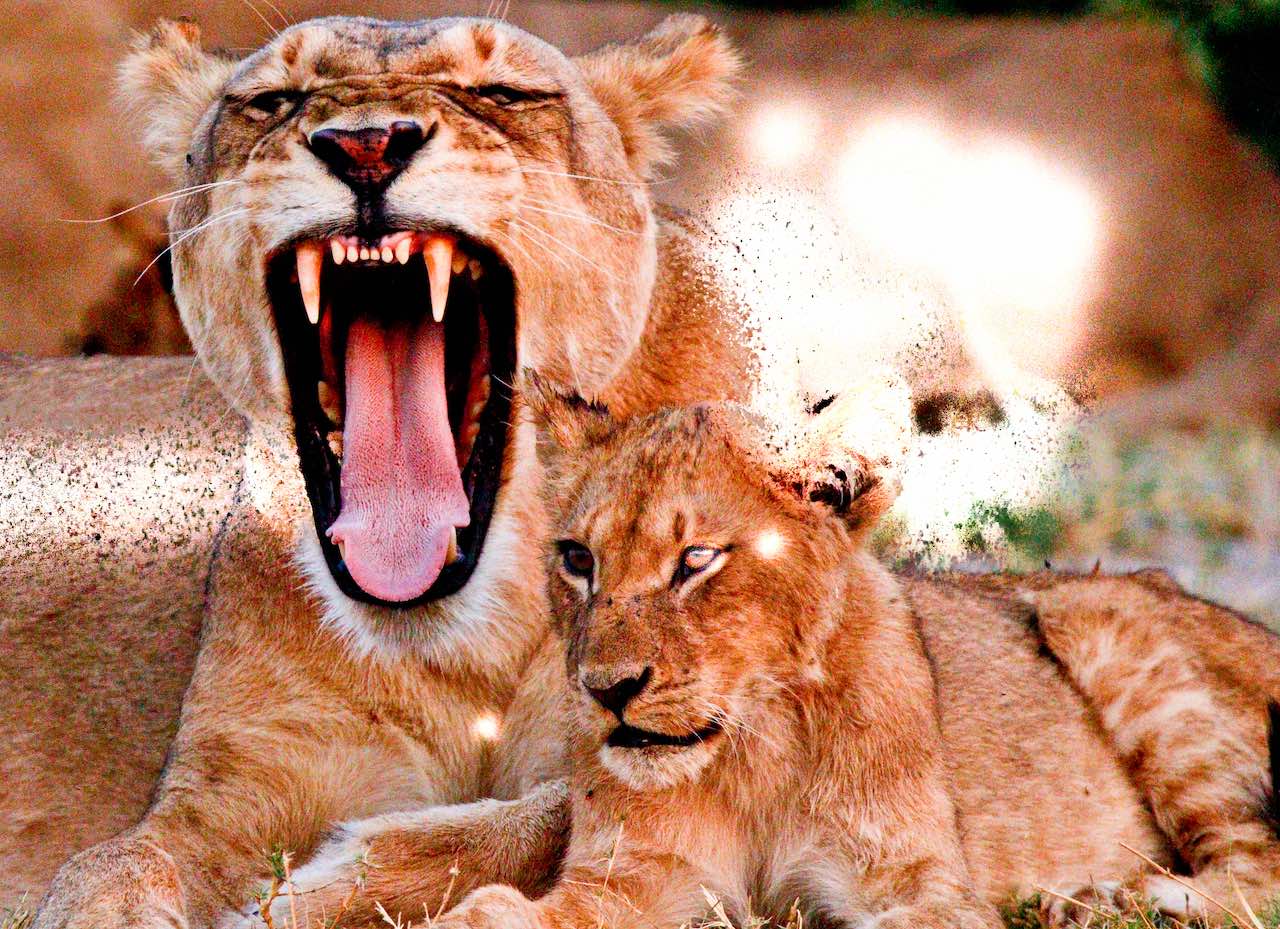 Unfortunately, night is falling and when it gets too dark to see anything we return to camp. That night my fitful slumber is disturbed by the roaring of lions, braying of hyenas and the chomping of hippos.

Next day, I’m given my camera with its 150-600mm zoom lens and Dan, my instructor takes me through the basics of safari photography.

He tells me to never switch off the camera, always give the subject enough room in the frame and remember to leave space for hidden legs of animals in water. His one bush survival tip is “Never panic!”

Later, I’m put to the test when I’m about to enter a hide to observe elephants at a water hole. There’s a solitary bull who I think will make a good shot so I point my camera. He’s not pleased, trumpets loudly and starts to charge and of course I jump straight into the safety of the hide. 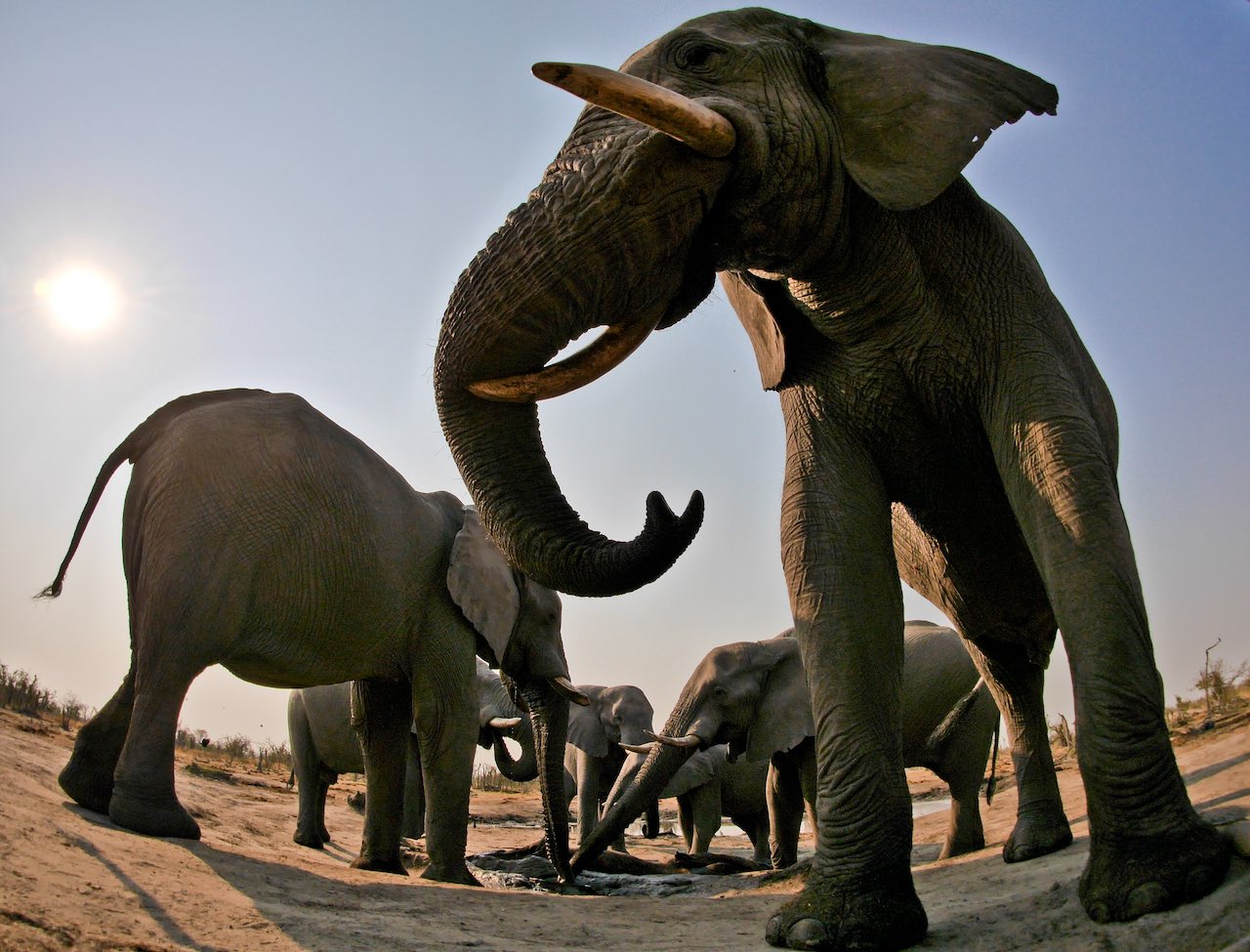 Dan is amused. He tells me that it was only a mock charge – if the elephant holds his head high and has his ears forward, there’s nothing to worry about. I prefer watching from safety and the elephants come so close to the hide that the dust thrown up by their huge feet sullies my lens.

My other indispensable companion is Wax, the spotter driver. Over the next few days he tracks leopard and lions in a landscape with no roads and no discernible features. He fords deep rivers and bludgeons through intractable parts of the bush in pursuit of his quarry. Along with the big cats we stumble across a huge herd of around 150 elephants, complete with babies and wait to catch hippos throwing their heads out of water in that classic hippo yawn. 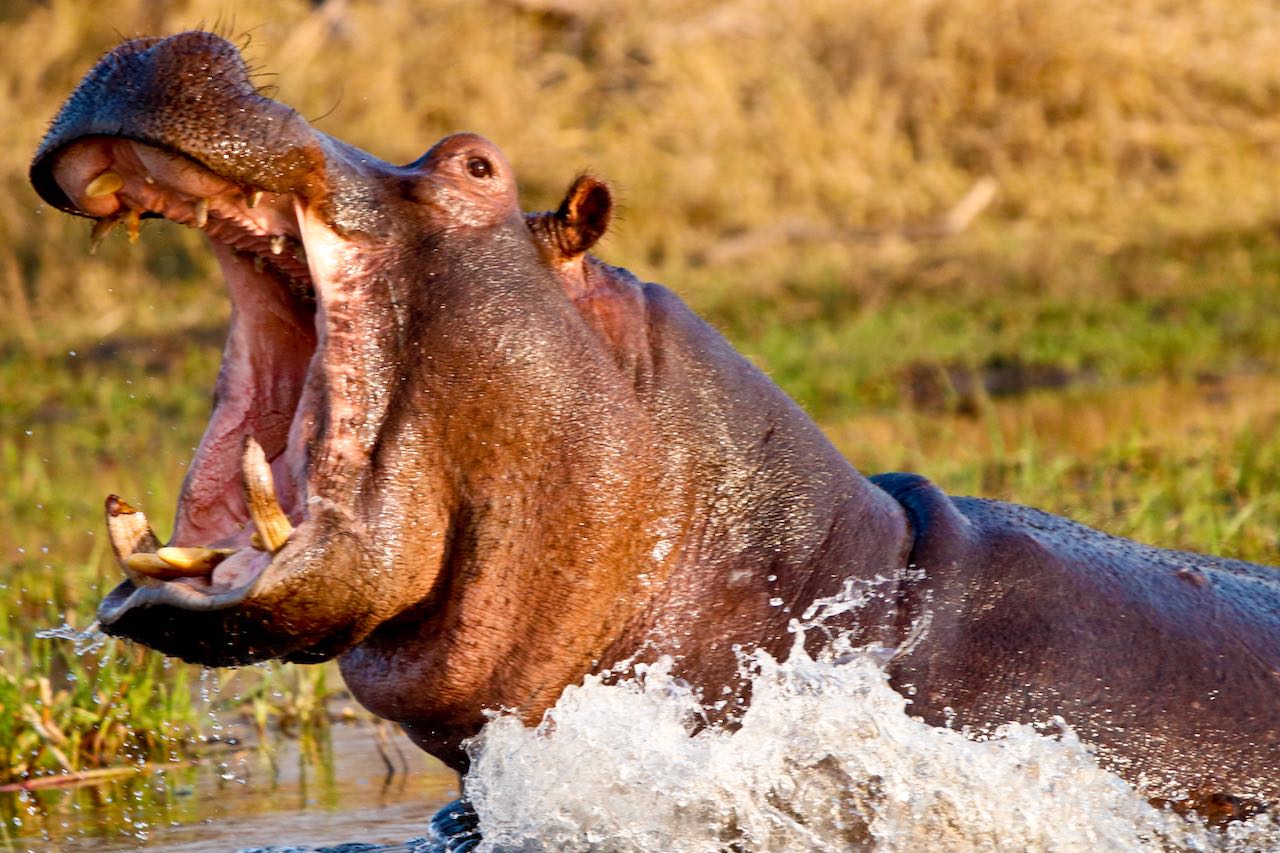 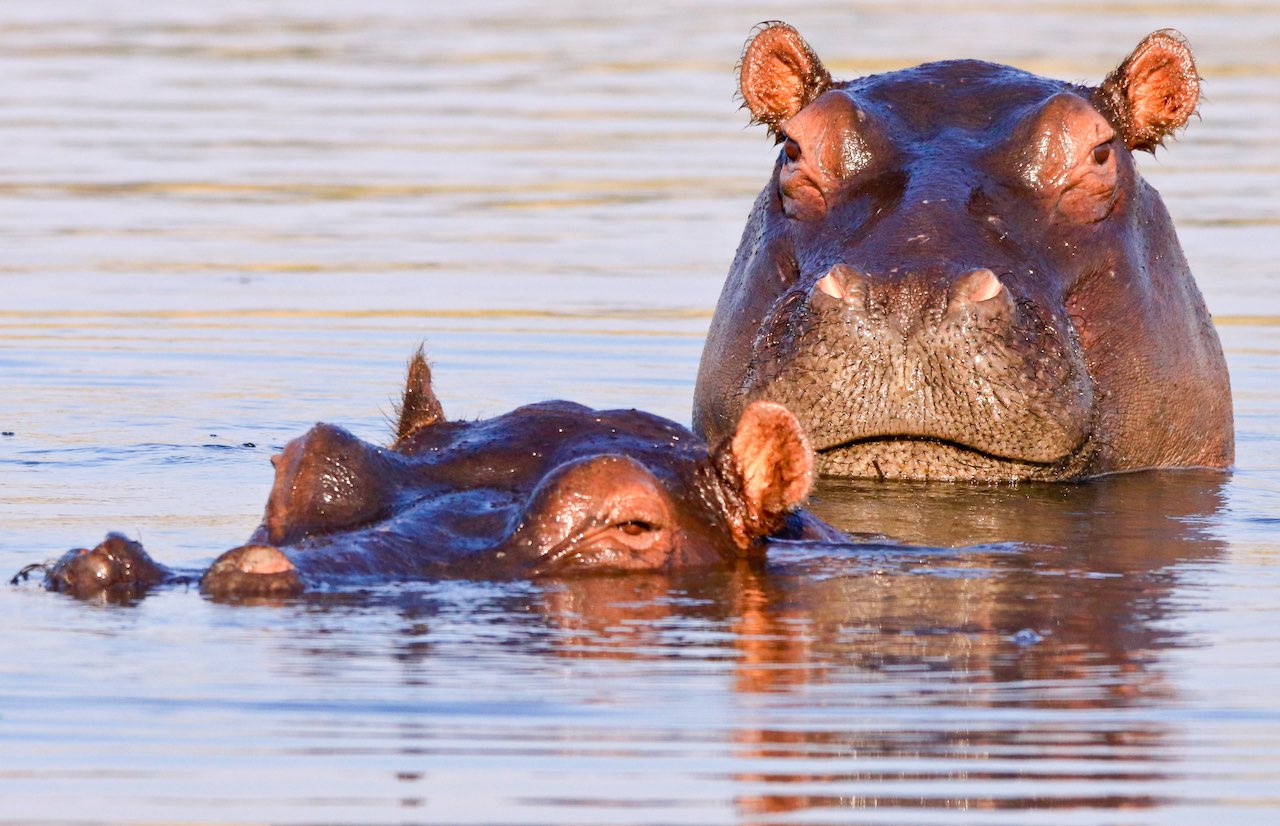 After three glorious days I take a small plane to Kasane, on the Chobe River which has game in abundance. I’m staying at the Pangolin Hotel on a hill above the river, a brand new facility specially designed for budding photographers. The guides are all professionals and their captivating wildlife pictures adorn the walls of the hotel. As in Khwai, each guest gets a camera on loan and goes out morning and afternoon, learning the craft of wildlife photography. 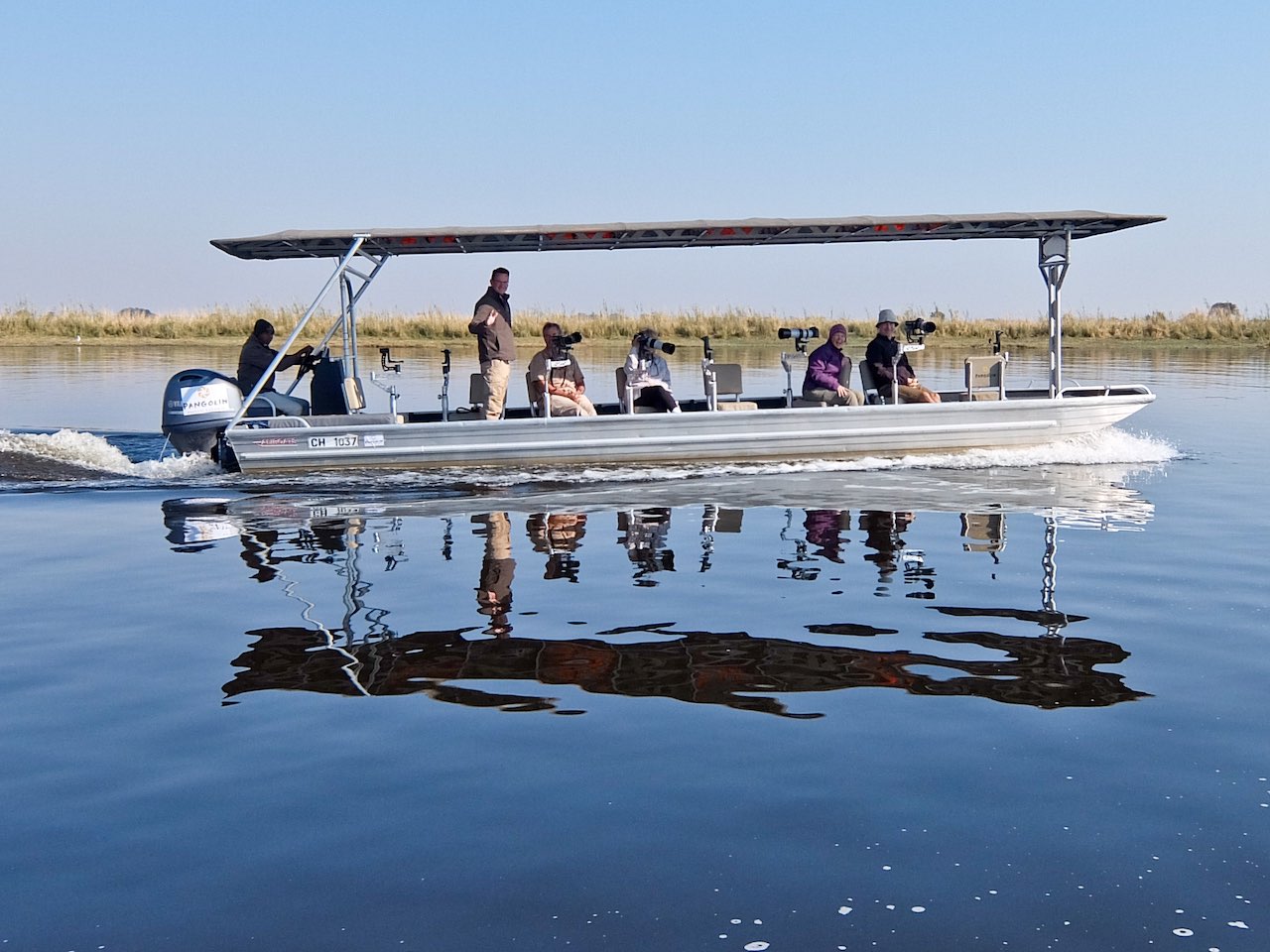 They also have purpose built boats equipped with 360 degree camera mounts. Morning finds hippos munching on grass on the bank, and huge crocs sunning themselves with their jaws wide open. Baboons play by the water and waterbucks come to drink. There’s time to linger, observe all, and also to get those special shots. Afternoon sees large herds of elephants playing in the mud, and a sighting of an elusive leopard in a tree. 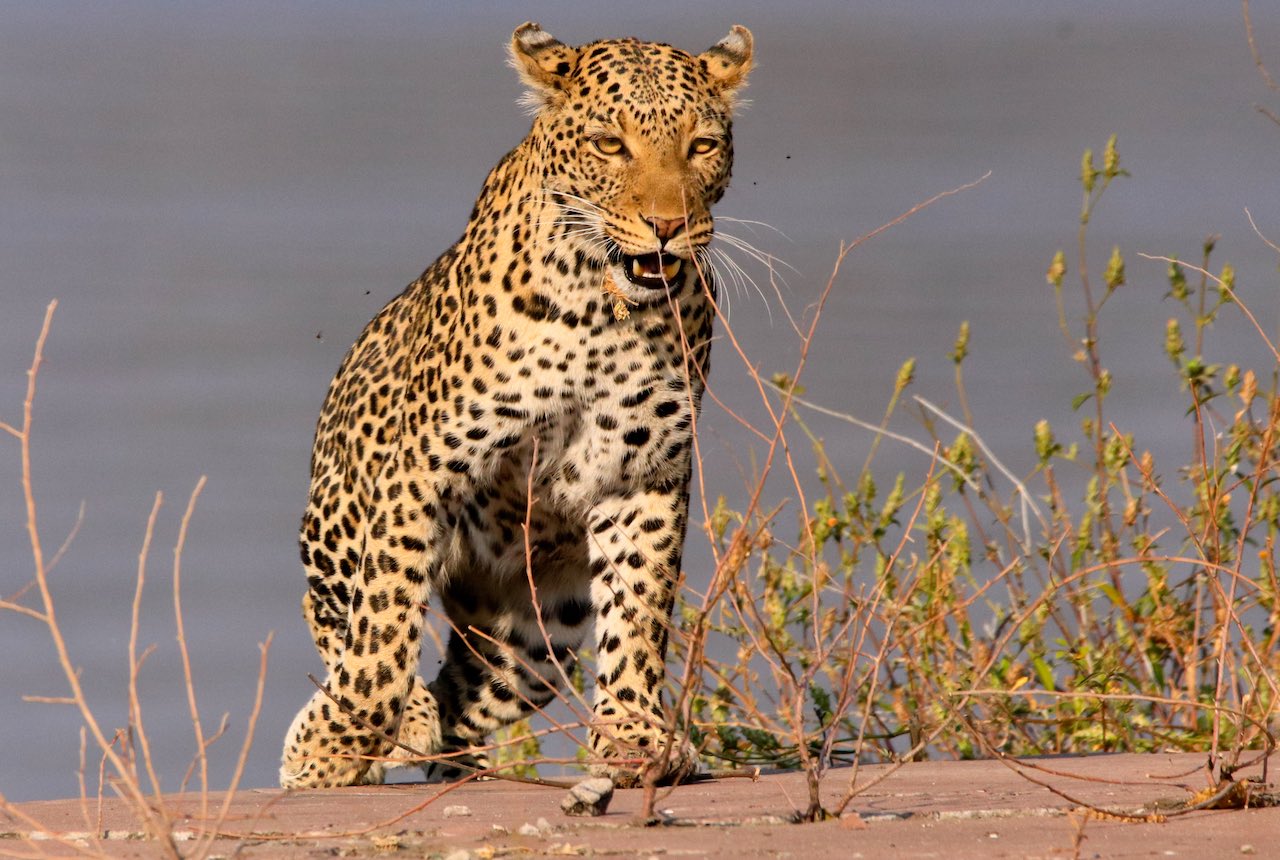 There are also game drives through the National Park twice a day. One memorable morning I get to see four of the big five – lions, leopards, buffalo, elephants, all close enough to almost touch. In the evening we run across three lionesses with 6 month old cubs, all out to play, just having fun.

In the evening the tutors will patiently view your pictures in a custom editing room in the hotel and give you useful tips. Some of my fellow guests have only used their phones for pictures before and I see their joy as they get acquainted with their new toys. They come away with shots of animals of a quality they could only dream of. And of course it’s all down to the patience of the tutors and the skill of the trackers.

On my last day, in the late afternoon, I have the big zoom lens of my Canon 80D focussed on an old battered Buffalo, busy chomping away by the water. He’s seemingly unaware of the two young lions, perhaps brother and sister, behind him.

They’re gradually creeping forward, keeping low in the grass. It can only be a matter of time, but the light is disappearing fast.

Suddenly one of them moves to attack, but the buffalo stands his ground, lowering his horns, ready to charge. This is enough to send his attacker back to his twin and we wonder if there’s going to be a concerted effort. But no, they’re too inexperienced and hold back, unsure of further action. We drop our cameras and the old buffalo wanders off into the sunset. This is the one that got away.

FLY: Airlink flies from Johannesburg to Kasane and Maun. Ethiopian Airlines flies via Addis Ababa to Johannesburg from Heathrow.