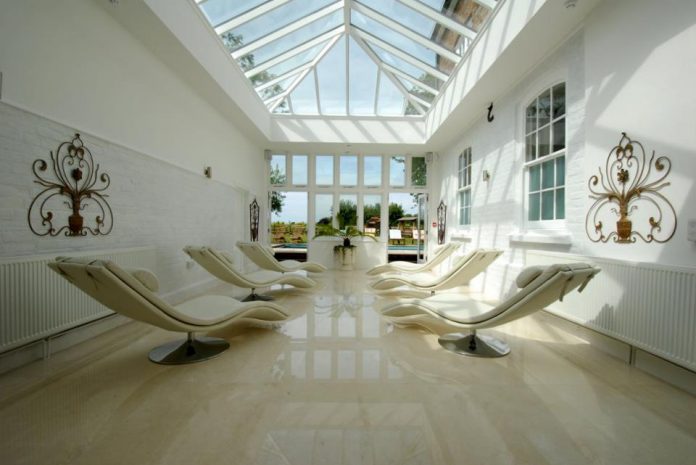 Too much chocolate over the festive season and a sedentary life style, just what do you  expect? Well certainly not a whipping in East Sussex.

But that is what I signed up for when I made my way to the small village of Crawford in East Sussex, the home of Slimmeria Retreat.

The daily routine at Slimmeria

I knew that I’d have to go from a feast to famine (just 400 calories a day) from wine to water and experience four hours daily exercise. Then it’s lights out at 9pm and not not a drop of coffee would pass my lips.

On arrival I was weighed and measured, handed a bottle of water and told to drink four a day. Accommodation was an elegant room with a huge en-suite bathroom and doors that open to the garden and a vineyard beyond.

The detox started at dinner when 14 of us sat down to a bowl of watery tomato and cauliflower soup followed by a herbal tea and a pep talk.

“Over the next few days you will eat only what you are given” barked founder Galia Grainger in her thick Russian accent.

“And you will eat all of it. This is an organic raw vegetable fasting diet. The Russian cook who runs the kitchen does not speak English, so she won’t understand you if you ask for snacks. She will throw you out.

“If you have any snacks hidden in your suitcase, pockets or even in your car, hand them to me now. Follow this plan and you will lose weight, if you don’t you will lose out.”

She then explained that each segment of our itinerary would be announced by a bell — akin to Pavlov’s dogs.

Early morning walk is no stroll in the park

The 7am wake-up bell rang. And again at 7.45am to call us to the dining room for a hot lemon drink and a slither of apple followed by a two-hour country walk.

This was no stroll in the park. It had rained hard over the previous few days and the ground all the way to the village of Battle, was extremely muddy.

This is 1066 country. It was on this verdant, hilly landscape that the Normans and Saxons fought for king and country.

And there I was fighting just to stay upright that I hardly noticed what on another days would have been pretty countryside trails.

There was no sympathy to be had though. “Mud is your friend,” I was told. “It is strengthening your core.”

And so the bells tolled

An eternity later — two hours on my watch — it was breakfast. A fruit juice. When the bell rang, it was into the gym for a workout, circuit training or boxercise class.

Another bell rang it was yoga in the White Room. The next bell was — at long last — lunch. The mound of orange and white made up of cabbage and carrot strips and topped with cherry tomatoes, looked and tasted lovely, but I wondered how long it would sustain me.

The afternoon ahead felt long. “Go for another walk” I was told. “But whatever you do, do not have an afternoon nap. If you want a rest, read in the White Room.”

There was no TV in the bedroom, the Wi Fi was unreliable and I really needed a distraction. I found it in the dungeon. This is where I endured the whipping with birch twigs “to get rid of toxins”.

The preparatory 20-minutes in the steam box was great but boy the whipping hurt. On the bright side, I stopped thinking about being hungry.

It was a huge relief to find that two of the next three walks were along different paths on the Hastings seafront. An enjoyable, invigorating brisk walk. The problem was I was often hungry, and so each afternoon it was back to the dungeon for a facial, a massage or reflexology to tide me over to teatime.

Tea time was a segment or two of fruit

Teatime was between 3pm and 4pm and the bell never rang for this. Somehow though, all 14 of the inmates made it for a segment or two of fruit. I could not believe how wonderful four small triangles of pineapple or a quarter of a pear tasted. Since there was nothing else being served, I savoured these mouthfuls for ages.

The dinner bell rang at 6.30pm each night — a plate of something warm such as lightly roasted vegetables or a soup with a mug of herbal tea for desert. The last call was for a dancercise class. Then, it was lights outs and bed.

It is a gruelling schedule and by “weary Wednesday” I was tired and could have done with a nibble of something sweet. “Would you like a couple of raisins?” It was a serious question. “No I said, best not binge.”

By Thursday, the world seemed different. I seemed brighter, happier. Perhaps it was because I was going home, or perhaps because I had lost 7lbs and an inch in all the right places.

I announced this at lunchtime and received an ovation. Then as I said goodbye, it was hugs, kisses and see you on the outside. I climbed into my car to drive home through the gorgeous countryside lanes and smiled knowing that the only eggs I’d be eating from now on were organic.