Mammoth Lakes in California’s Mono County has a far-away-from-it-all location in a valley in the  eastern Sierra Nevada, yet remains in the centre of everything. It’s is just a five hours scenic drive from Los Angles, Las Vegas and San Francisco and a mere two hours from Lake Tahoe.

We drove for five and a half hours from Newport Beach (around 40 minutes from Los Angeles) along the CA-203 for 341 miles passing the Sequoia National Forest, the Death Valley National Park and the Inyo National Forest. Imagine the sensational scenery along that route.

We stopped off for a break in the quiet, dusty town of Lone Pine (87 miles from Mammoth Lakes) to check out the Museum of Western Film History – the story of filming in the area from the early days of the Round Up to the modern blockbusters such as Iron Man.

Mammoth Lakes is best known as a ski resort but when the snow finally melts what you get is a vibrant timber-clad village that is simply beyond quaint. It is surrounded by lush forest and bordered by the Ansel Adams and the John Muir Wilderness Areas. You can see the Minaret hills and peaks on the sky line and on the near horizon is the dizzyingly high Mammoth Mountain (11,053ft) that begs to be explored. The mountain is actually a volcano and you can even see steam escaping from its top from some vantage points.

There’s only around 8,000 locals in Mammoth Lakes and they seem unfazed by its elevation of 2,500 metres (8,000 feet) and its thinner air. They spend their time involved in marathon runs, bike tours (bikes are available to rent), kayaking, hiking or some climbing escapade or other when not working. In the evening there are alfresco film viewings in the village and live music and at the weekends a summer food market festival pops up.

Not sure if the term couch potato even exists here and with such a panoply of summer activities you would end up home alone in any case.

Probably the best way to start exploring is to get oriented with a ride on the Panorama Gondala at Mammoth Mountain. Being whisked on a steep ascent of 11,053 feet (3,368m) to the summit of Mammoth Mountain is an exciting experience and delivers a joyful 360 degree view of the snow speckled Sierra Nevada. Even in June there’s still plenty of snow up there, certainly enough to build a snowman or two.

From here some people scramble up the Ritter range which emerges 13,143 feet/4006m high out of the Ansel Adams Wilderness. It’s a class 2 climb which means it’s mostly upright. I preferred to read about it and the area’s geology and history in the Eleven53 Interpretive Center.

From the Mammoth Centre there is a 20-minute shuttle transfer to Devils Postpile National Monument. There are several hop off stops within its 324 hectares of lush scenery. We were told that we may spot a black bear. We didn’t.

But we did lose ourselves amid the fir trees and Jeffrey pines (whose bark we stopped to scratch to release its famous butterscotch scent) and the sound of bird song only bouncing back into the moment at the sight of tiny chipmunks and pine martens.

It’s hard to believe that Devils Postpile was naturally created by fire and ice. It is a column of basalt that was formed almost 100,000 years ago by flowing lava which cooled and split forming vertical and symmetrical 18 metres high columns forming an almost perfect hexagon. The columns have been made shiny and smooth by glacial ice.

Further along is Rainbow Falls, a waterfall on the middle fork of the San Joaquin river where it makes a staggering 101 foot (31m) drop. It is the highest waterfall in the area and on sunny days, a delightful rainbow hangs in the mist caused by the plunging water.

An information plaque says that the platy rhyodacite rocks in the surrounding cliffs were created by lava eruptions some 75,000 years ago. These are eroding thanks to the rushing water and pushing the waterfall back. By the time I got there it had already receded 500ft (150m). So no telling where it will be by the time you get there.

Bodie – a ghost town remnant of the gold rush

By rights, there should be tumbleweed and a chill wind passing through Bodie ghost town. The former gold rush town is 8400 ft above sea level and located 65 miles north of Mammoth Lakes. 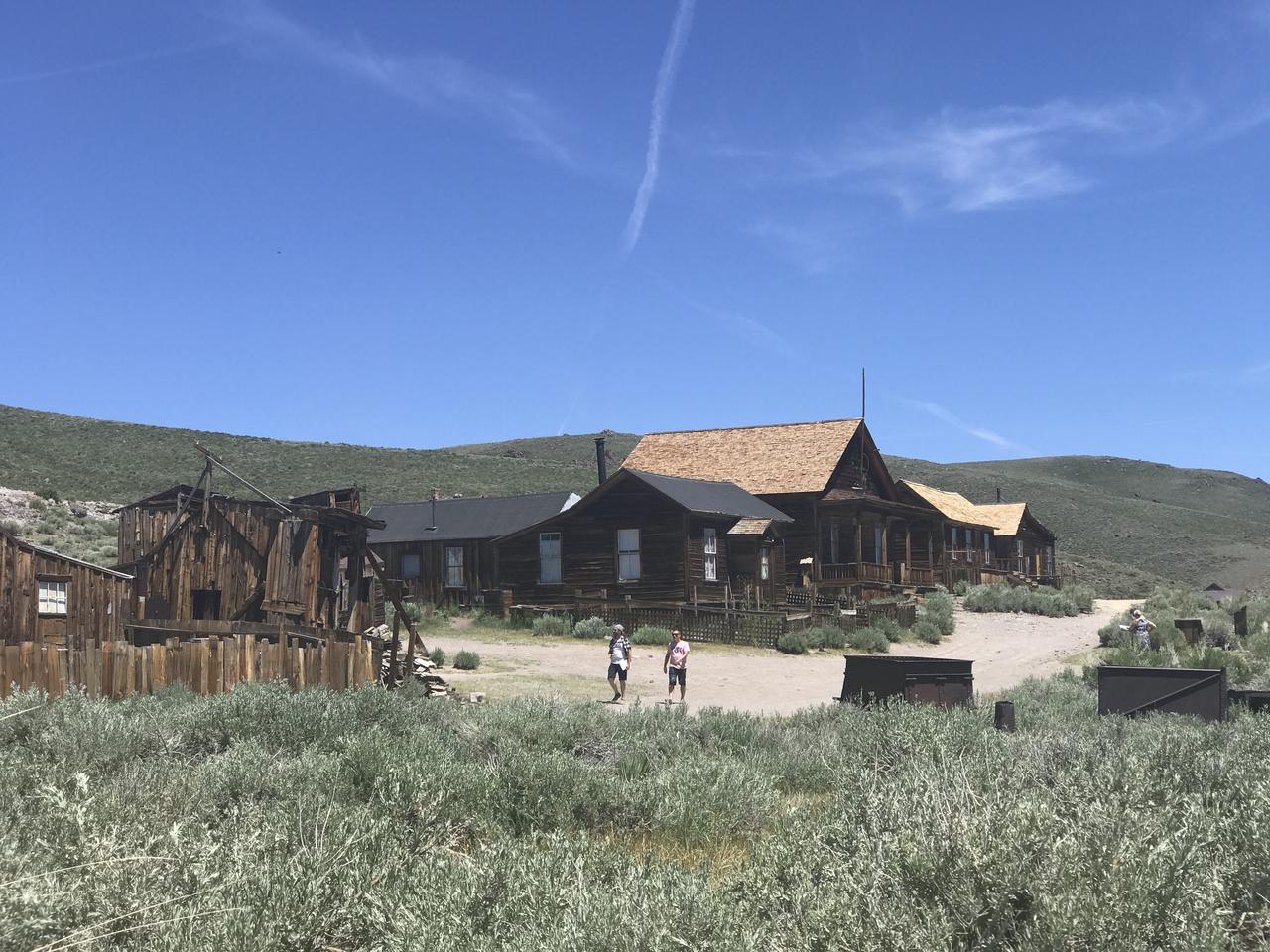 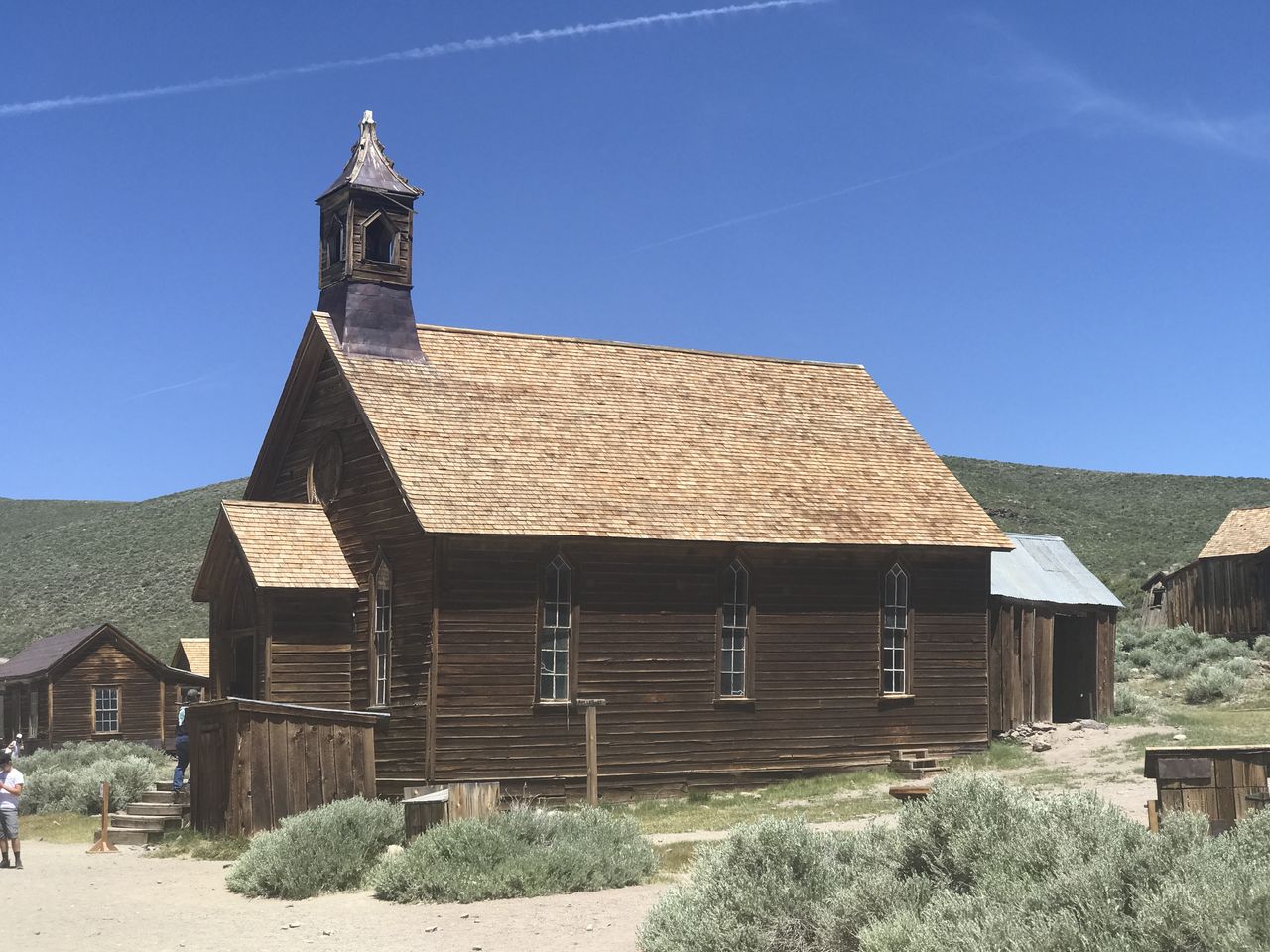 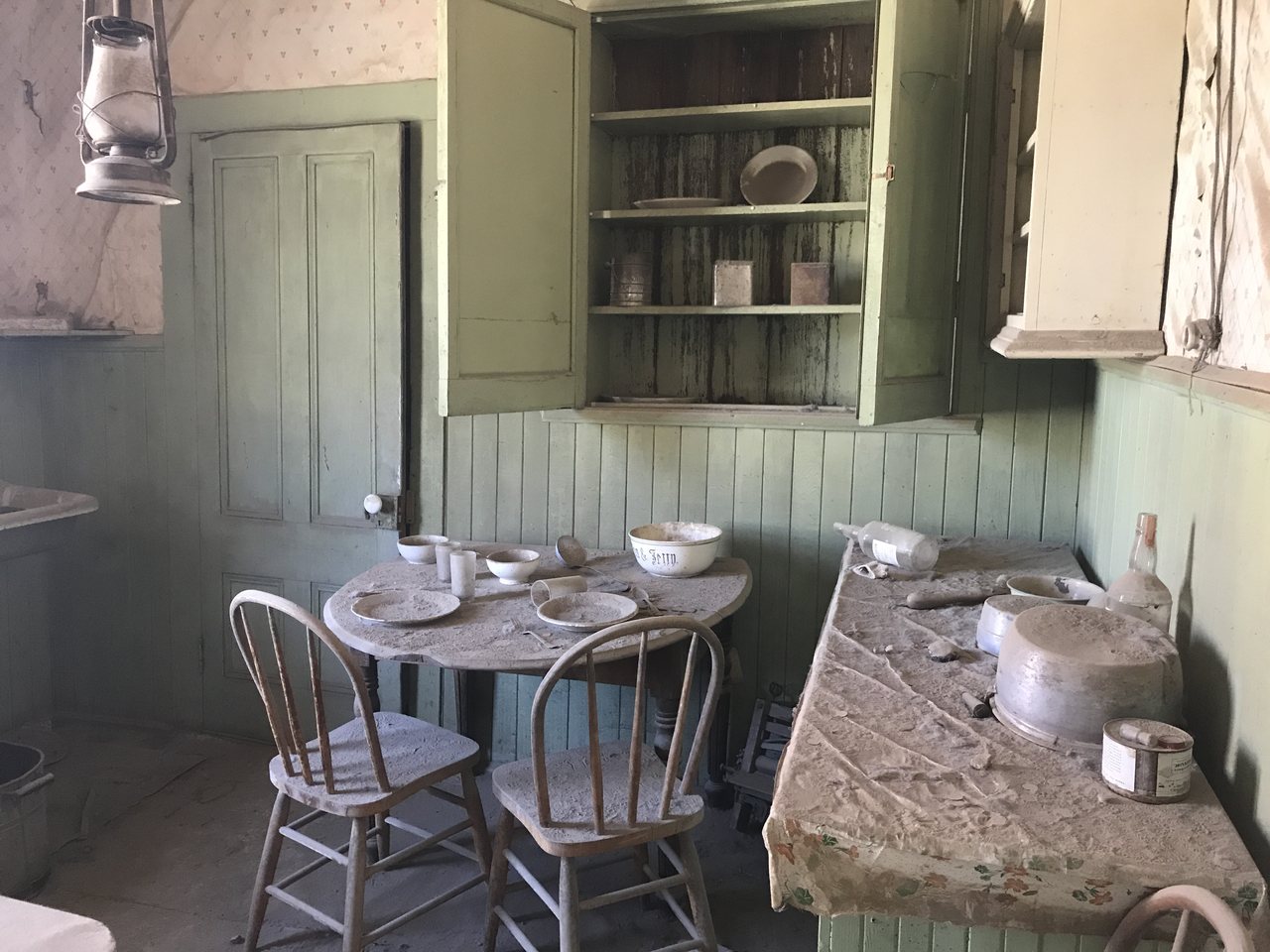 In 1858 prospectors arrived and this led to the Bodie Boom of 1878 to 1882. The population reached 10,000 making it one of the top five biggest cities in California at that time. It even had its own China Town, a bowling alley and two churches.

You may think that bodes well, but the main street had an astonishing 65 bars and gambling dens which made it a pretty lawless place. With a 90 per cent male population, anyone could shoot someone in the back for cheating at cards or flirting with a “working girl” they had their eye on and get away with it. Basically you had to be a badass to live here. And those that survive would have a share of the gold mined valued at nearly US$34 million.

There are 200 buildings left (there were originally 2,000 but most burned down in a fire) including a bank and a prison and all still have the belongings in them. The townsfolk simply left everything and walked away. Furniture, kitchens have cutlery and schools have kids’ homework. Even the merchants’ stores have products on the shelves. It gives one hell of an eerie snapshot into life here.

Some say there are real ghosts that patrol the dirt streets and hide in its century-old buildings. The most famous is Rosa May a disgruntled working girl. Guides are available to walk you around town after sundown and you may even meet her. 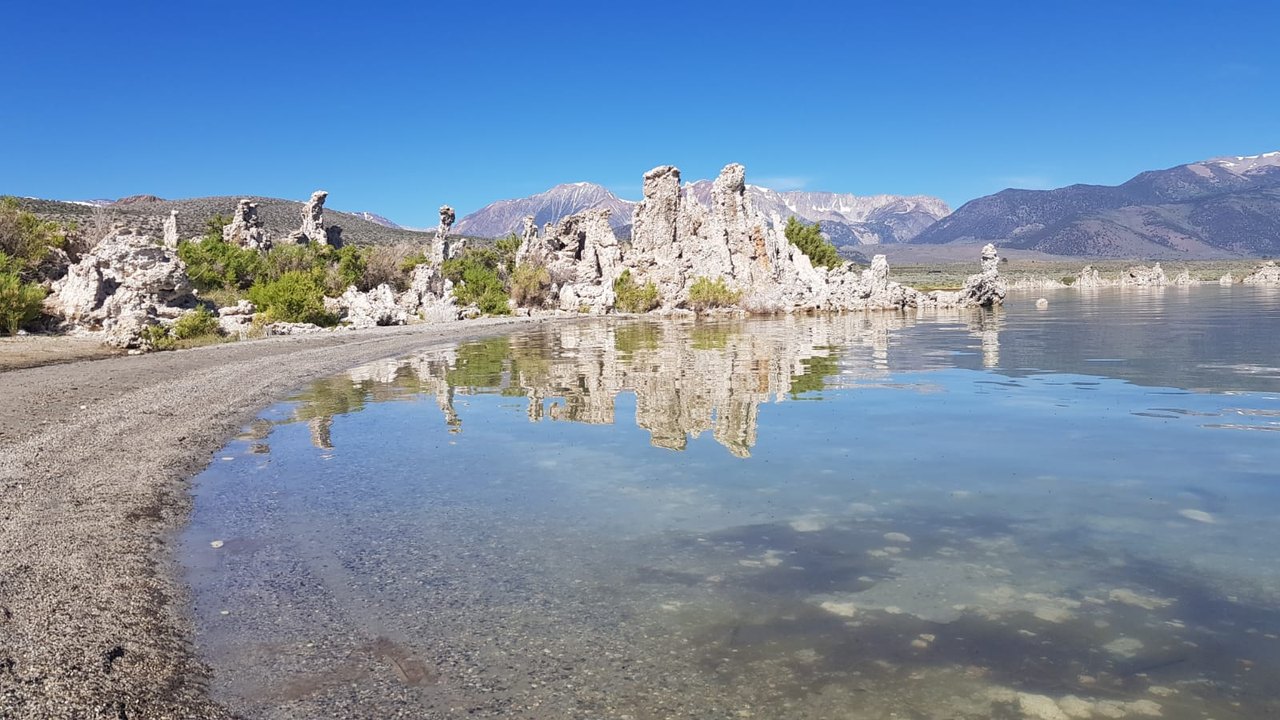 Located just off Highway 120 East is South Tufa Grove and this road leads to the south end of Mono Lake. This bizarre desert lake has a stealth-like, silent existence where nothing much moves other than the alkali flies that hover around the lake. Certainly no fish can survive.

The turquoise-hued water, which is two and a half times saltier and 80 times as alkaline as the ocean, has no way out. It can only escape through evaporation. Yet this huge expanse of water has been here for over a million years.

White rocks – made from calcium carbonate and limestone known to geologists as tufa (too’-fah) – frequently emerge out of the water – some tall and strangled others wider but always in unusual forms. Ospreys make their home here and I took a close up look at the clear water and saw tiny white shrimp nestled on underwater rocks.

We entered the Yosemite from the eastern part of the scenic Tioga Park. It stretches an incredible 1,200 square miles yet 95 per cent is considered to be wilderness. The other five per cent is easy to traverse thanks to modern roads.

The highest peak in the park is Mount Lyell 13,114 feet and the lowest point is 2252 feet. That means in just one park you get to experience a staggering 11,000 feet in elevation difference and within that you get to see ancient giant sequoias especially in the Mariposa Grove, the deepest of valleys, waterfalls and huge stretches of meadows.

Environmentalist John Muir came here in 1869 as a sheep herder. He mapped the park and was the first to discover that much of the park was carved by glaciers. We saw some polished granite which looked and felt as polished as the worktop in my kitchen.

One sad note is that at one time the area was packed with California Grizzly Bears. The last was killed in 1925 and the only way to see one now is on the Californian flag.

Where to eat in Mammoth Village

Toomeys: This is a great place to have breakfast. Pancakes, eggs as you like them with potato and sourdough and great coffee too.

Skadi Restaurant: First impression are not always right, and this is proven by the intimate and refined Skadi restaurant. It seems almost hidden behind an industrial looking building but once in the scene is Swiss style chalet decor with just ten tables, a small four-stool counter and a Norwegian menu. Chef Ian Algeroen refers to his menu as California Sierra alpine food with a Scandinavian twist. For instance a smogarsbord of gravalax, smoked trout and horseradish and pork belly confit and roast spiced tenderlion.

Smokeyard: A fun, chilled out gaff where burgers and streaks are served. These are huge portions and I wondered if anyone actually finishes their food. Waiters always offer a doggy bag.

Old New York Deli: For snack attacks or picnic lunch (we shopped here for our picnic at Rainbow Falls) this place is great. Bagels galore with a huge selection of fillings even egg white egg and spinach.

GET THERE: Fly to Los Angeles International Airport (LAX) served by myriad of airlines.

RENTAL CAR: Hire a car with Rentalcars. Book online or download the app. An SUV for two weeks from LAX starts from £182, when booked at least a month in advance.

STAY: The Village at Mammoth offers spacious luxury self contained flats in the heart of the village close to the restaurants and shops. They have their own gym. Rental prices star from $169 / £130 per night. We stayed at Lincoln 1 which had its own gym.

Guide to safe skiing: the do’s and don’ts of winter sports