As I lazily paddle up the River Gambia the impossible tangle of mangrove roots sequestered beneath the explosion of greenery gift welcome protection from the strengthening late morning sun.

And not just for me it transpires, my keen-eyed guide pointing out some of the more permanent local residents, my favourites being the lounging Monitor lizards, their bellies flopped on the shadier branches, legs dangling limply to the sides as stately, statuesque herons scan the banks and everything from osprey and hornbill to kites lark overhead. “There are no crocs though,” the operator Mark Goddard is quick to point out. Always good to know.

Kayaking up the River Gambia 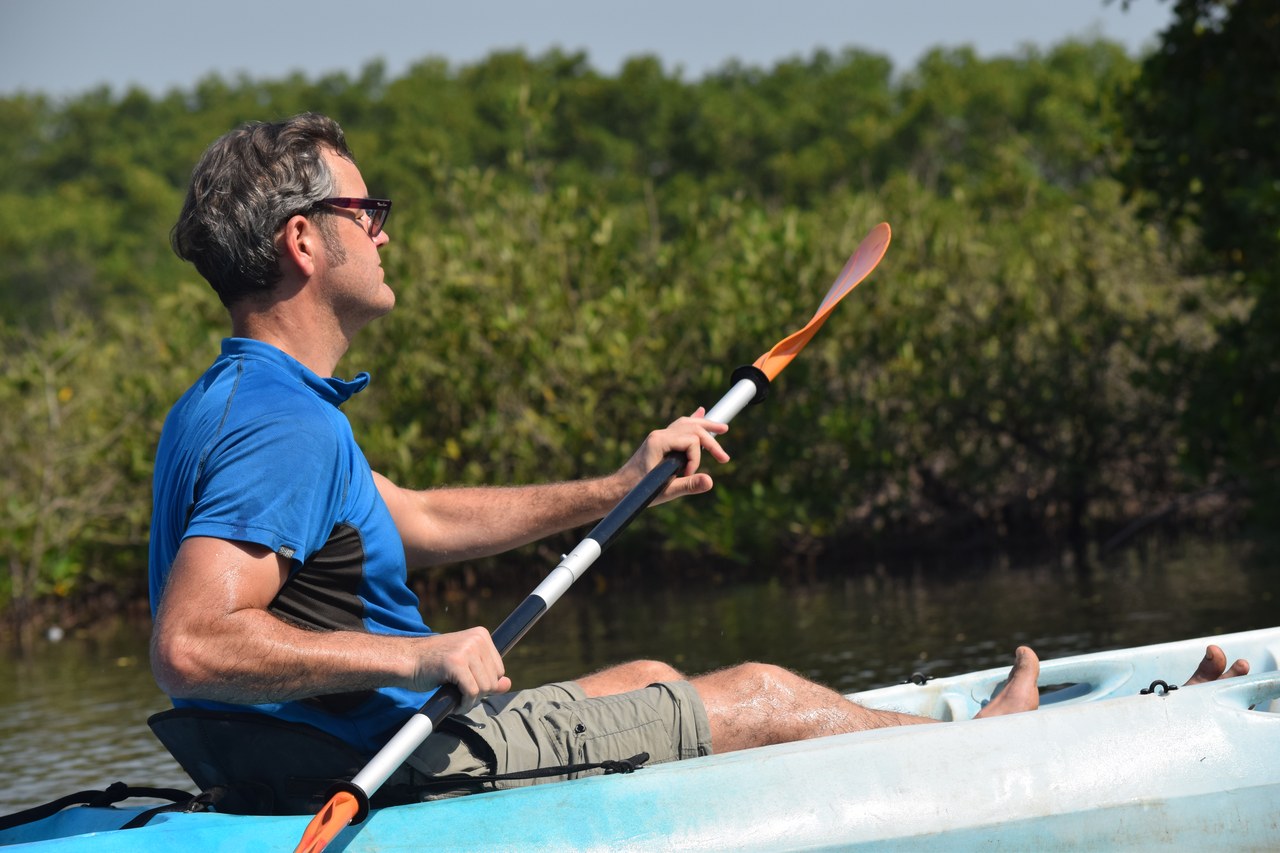 My kayaking excursion from Tanji Fishing Village delivers a gentle introduction to the River Gambia, which lends its name to the compact West African country that extends briefly beyond its banks as it snakes inland towards Senegal, the Francophone country that surrounds it on all sides bar the ocean. 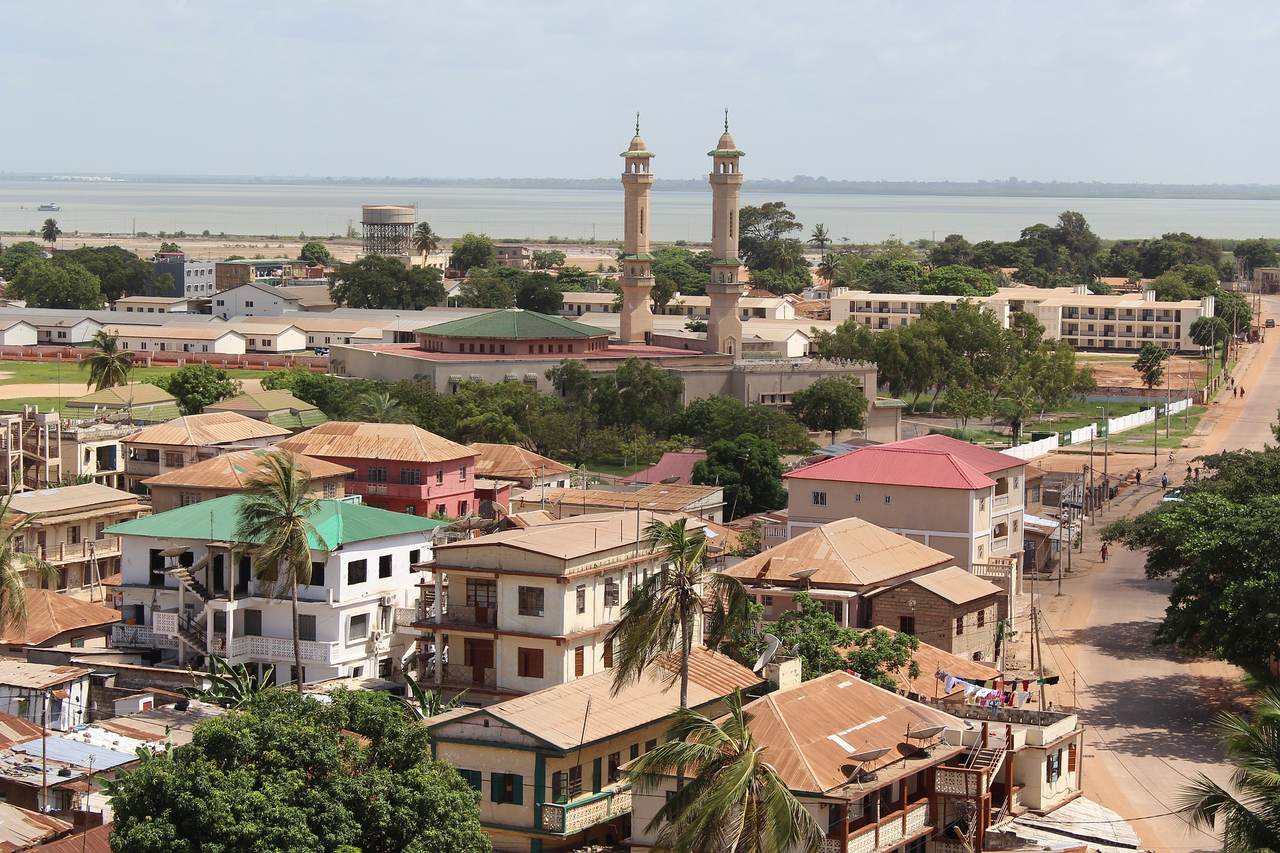 Dutifully, upon landing in Banjul in late October, I stay south of the river and make a beeline for a beachfront bolthole. Mine lies in the tourist enclave of Kotu, just beyond Fajara Golf Course, which segues into Kololi, home to stalwart hotels such as Senegambia Beach and Kairaba, the restaurant-cum-nightspot Poco Loco — not to forget the bawdy bedlam of bars and restaurants that make up the Senegambia Strip.

Further down the coast past Bijilo National Park yields quieter, less hectic spots such as Tanji, Sanyang and Gunjur.

Given The Gambia’s long dependence on beach-based package holidays, it is, unsurprisingly, unabashedly ‘touristy’, the most unseemly result being the overt prostitution and persistent pestering of visitors by young local guys, or ‘bumsters’. Even in tourism centres though it’s not hard to get a taste of local flavour, hewn from the country’s long, rich culture and its rich mix of tribal cultures, from Mandinka to Jola and Fula.

This fusion fields a tasty cuisine, centred on a ubiquitous trio of stew-like dishes — yassas, benachin and the peanut-based domoda — backed by seafood staples such as ladyfish and butterfish.

My best meal comes courtesy of the local restaurant, Kadiekadie, a dish of rice and plassas, a cassava leaves stew, coupled with a grilled snapper and delicious organic ginger drink. All for 110 Dalasi (just under two pounds). This as talented local musicians pump put everything from contemporary tunes in hotel bars and nightspots such as Kololi’s Poco Loco to more traditional staples based on instruments such as sabar drums and the stringed kora. 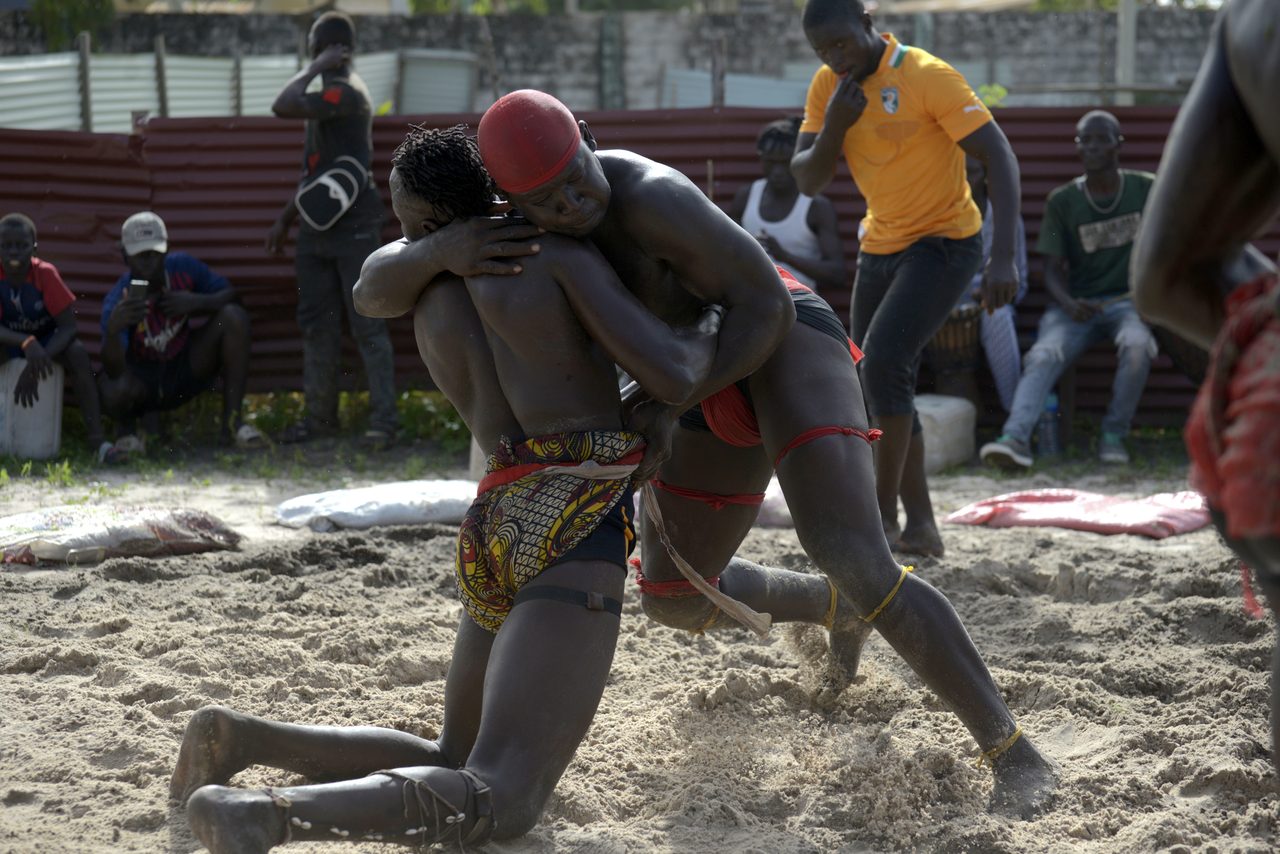 Another popular Gambian pastime worthy of exploration is wrestling, my first, touristy, taste coming courtesy of one of the bouts put on by Rainbow Beach Resort in Sanyang (rainbow.gm). Summoned from my beachfront seafood lunch by the beckoning drumming I stumble upon a wrestler crawling on his knees into the ‘arena’, cueing the start of an elaborate array of pre-bout rituals, bullish parading around the ring and outlandish dances.

It’s all good fun, the wisecracking master of ceremonies, Jawla, adding light relief between bouts as the hypnotic drumming builds and falls between anticipation and celebration. Star of the show is inveterate showman Crazy Rock who keen grapple fans can see perform at Bakau’s Independence Stadium.

My appetite whet for a taste of the country I happily vacate my sunbed and venture upriver, the country’s compactness placing a wide variety of experiences within a few hours’ drive along the north or south bank.

Moreover, the early 2019 opening of the Senegambia bridge offers a handy upriver alternative to crossing the River Gambia via the Banjul to Barra ferry. (That said, I do have a soft spot for the ferry). 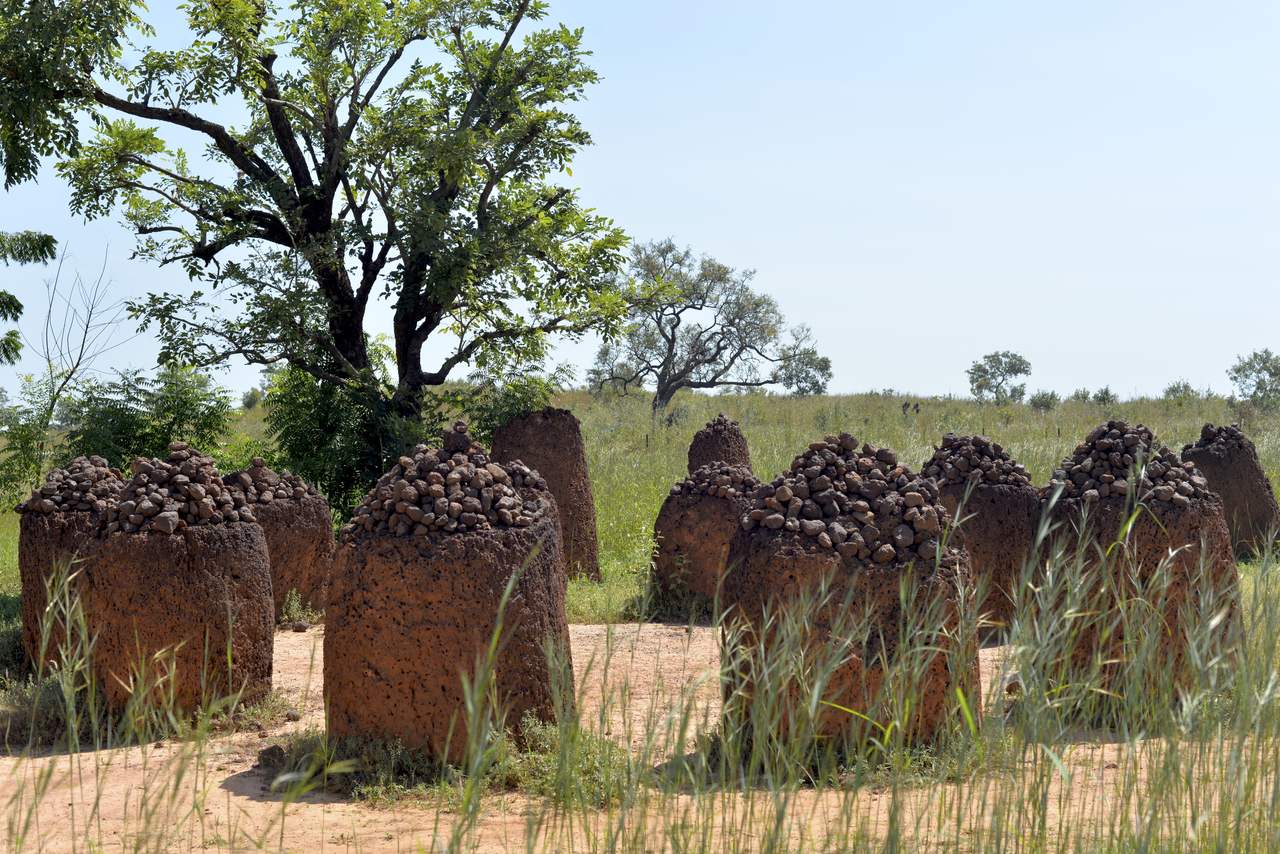 I’m soon marvelling at the Megalithic Wassu stone circles and exploring some of the islands in its stream. Reaching MacCarthy Island via the short car ferry Georgetown delivers poignant reminders of the region’s historic role in the slave trade, a story well told by the author Alex Haley in his famous novel Roots. 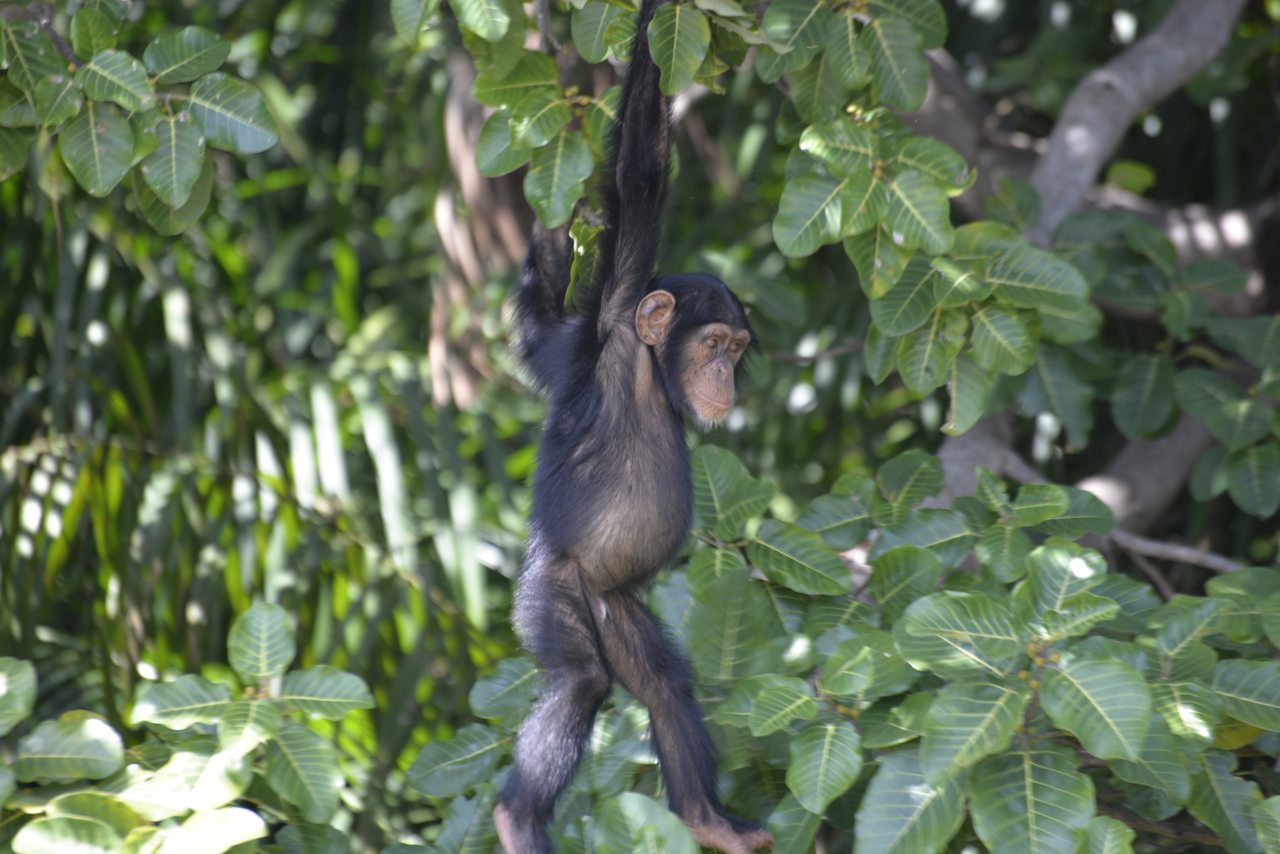 Baboon Islands – chimp in trees by the Gambia River

Earlier, my rusty, midday boat trip to the Baboon Islands is seasoned with sightings of frolicking hippos and baboons before the sound of the outboard lures three of the islands’ 130 resident chimp riverside to perform for the visitors, a feat rewarded with a few bananas tossed by my guide.

As the above experience suggests, Gambian wildlife encounters are typically low on ‘wild’. My tours take in everything from the lacklustre vulture feedings at Senegambia Hotel to Kartong’s woebegone reptile farm and Bakau’s Kachikally Museum & Crocodile Pool. “That’s why I fed you last night — for the crocs,” jokes my guide Mamou as we approach Kachikally, both of us keeping an eye out for famous, elder statesman resident Charlie. 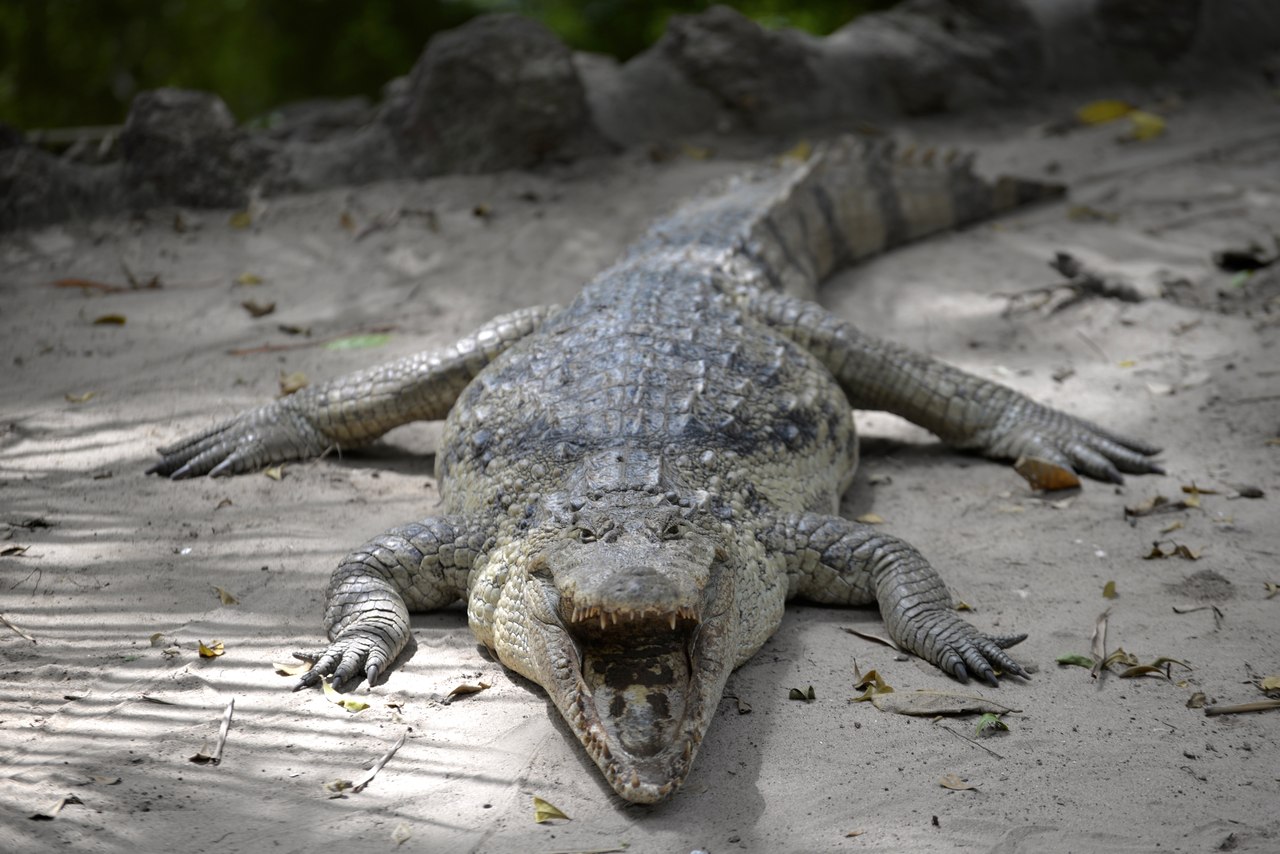 Other readily accessible animal interactions include Bijilo National Park’s monkey encounters. For bigger game consider hopping over the border to Fatala, in Senegal with a local operator such as African Adventure Tours (adventuregambia.com).

Far more impressive is the birdlife, The Gambia being home to more than 550 species of birds, with some birding areas such as Kotu Creek a stone’s throw from the coastal resort strip. Plus, there’s an excellent roster of local guides.

My best birding comes upriver courtesy of Morgan Kunda Lodge (morgankunda.com). This laudable, non-profit responsible tourism venture, with basic accommodation, pumps any funds earned from helping nature lovers decode the area’s offerings to assist the local village, Jarjari, some of whose residents enliven my first night with an impromptu night of singing, dancing and drumming at the lodge —  a trip highlight. Sunrise, however, finds me on a guided stride to watch the birdlife stir on Bao Bolong wetlands.

Returning via the village I wiled away a particularly pleasant post-breakfast morning watching the birds flit beyond the lodge’s hide-like platformed area, from fire finches and yellow weavers to a Senegal coucal and flighty, red-beaked hornbill.

With The Gambia still picking up the pieces following the protracted demise of dictator Yahya Jammeh, the collapse of Thomas Cook’s UK operations before the start of the 2019/20 winter season delivered an untimely blow, yet viewed long term it may prove a blessing.

Meanwhile, Gambia Tourism Board is actively looking to reduce the country’s reliance on penny-pinching package tours by attracting a wider mix of visitors and fostering more sustainable, locally beneficial tourism endeavours, from plans for small ship river cruises to its nascent village homestay programme, started in Ndemban. Handled well, it may give cause for Africa’s self-proclaimed Smiling Coast to beam brighter than ever.

GET THERE: The Gambia Experience (gambia.co.uk) has added an additional weekly departure apiece from Gatwick, Manchester, and Birmingham to Banjul, for the 2019/2020 Winter season, operated by its partner Titan Airways, and Portuguese carrier TAP began flying three times a week from Lisbon to Banjul in October 2019. Travel giant TUI is also looking to add capacity from Europe in 2020.

STAY: Notable recent openings include the African Princess and Sunprime Tamala Beach. While my room in the former proves fine I find the resort itself a moribund affair, with an ill-conceived layout. Much better is the Tamala, with its more pleasing design and livelier location.

Another recent opening — and a personal favourite — is the ten-guestroom Swiss Boutique, fronted by a generous pool area and a lovely, quiet beachfront.

Higher-end options include Coco Ocean, where Prince Charles and Camilla stayed on a recent visit, while recommended responsible tourism options include Footsteps Eco-lodge.