Spotting a tiger in its natural habitat in India is notoriously hard. And no wonder as there are only 1,400 of these big cats in the country and these are spread over more than 40 national parks. Nevertheless, I was in the area so I took a trip to the Sunderbans Tiger Reserve in West Bengal and stayed hopeful.

Oddly, just before setting off from Calcutta to the Sunderbans Tiger Camp our naturalist, Avijit Dutta, reported that: “Some years ago, a 21-year-old woman was dispatched as part of a team to the Sunderbans to catch crabs to sell. On her way back, she was spotted by a hungry tiger who killed and ate her.”

By the time I had driven the 90km from Calcutta, picked up one of the many ferries on the Gadkhali jetty that sits in the mouth of the Ganges and sailed two hours to Waxpol Jungle Lodge on Dayapur island, this disconcerting story had been well and truly banished to the dark echelons of my mind.

In any case the mangroves and forests of the Sunderbans are shrouded in mist, mostly uninhabitable and much of it is out of bounds to most humans. So for the likes of me and other tourists, the only way to spot a tiger is on a ferry cruise.

From any perspective the view over the Sunderbans seems to stretch forever. “Forever” in numbers is actually 10,000 km2 (3,900 sq mi) making it the biggest area of coastal mangrove forest in the world. It spans two countries: Bengal in India and neighbouring Bangladesh. The Indian part (where I was) covers around 4,262 sq km, with 2,585 sq km given over to a national park and tiger reserve.

So it was amid this watery network of tidal waterways, mud flats, small islands and mangrove forests, that I took my chances. There were other hopefuls too, including a honeymooning couple also staying at Waxpol Jungle Lodge, who hired an entire romantically-dressed boat for themselves.

Two days meandering through the mangroves

The day started at 6.30am on the Jungle Tiger boat. We boarded as the sun rose and watched as the crew brought on breakfast and lunch parcels that they carried on their heads.

We finally set off a little after the colourful boat carrying the honeymooners but in the opposite direction. The sun was high and releasing orange-hued rays that made their way through a misty sky drawing a shimmering line of tapered light onto the water. It was a slow quiet glide passing Sajnekhali watchtower complex and through Pirkhali River – khali means canal – and the only noise was the hum of light chatter of Hindi banter from the crew.

When we turned right towards Sudhanyakhali, the scene was of swampy mangrove on both sides. And eventually a boat carrying hay.

By 8am we were deep in the creek and the egrets could be seen elegantly pottering about the coast, sandpipers flew overhead and black capped and brown winged kingfishers endemic to the mangrove popped up on tree tops and branches. 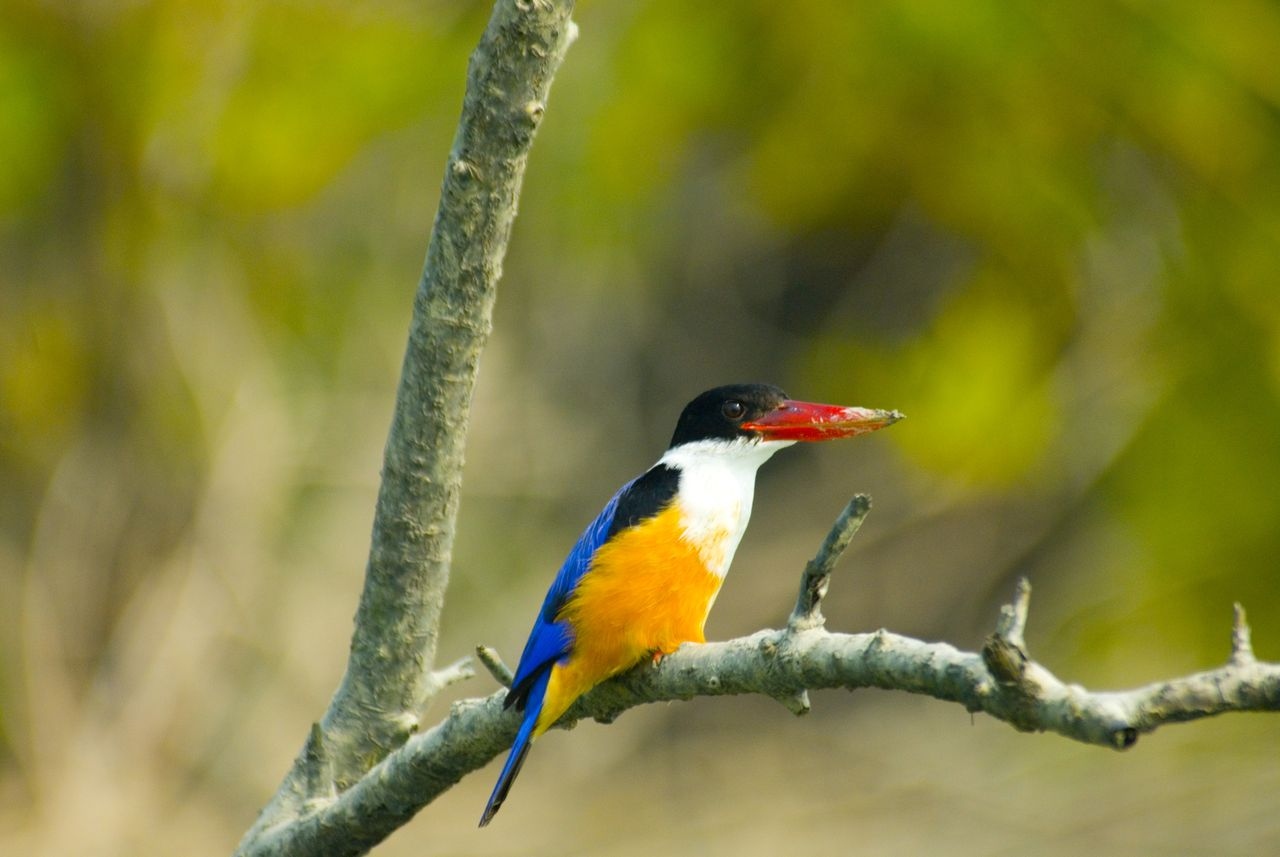 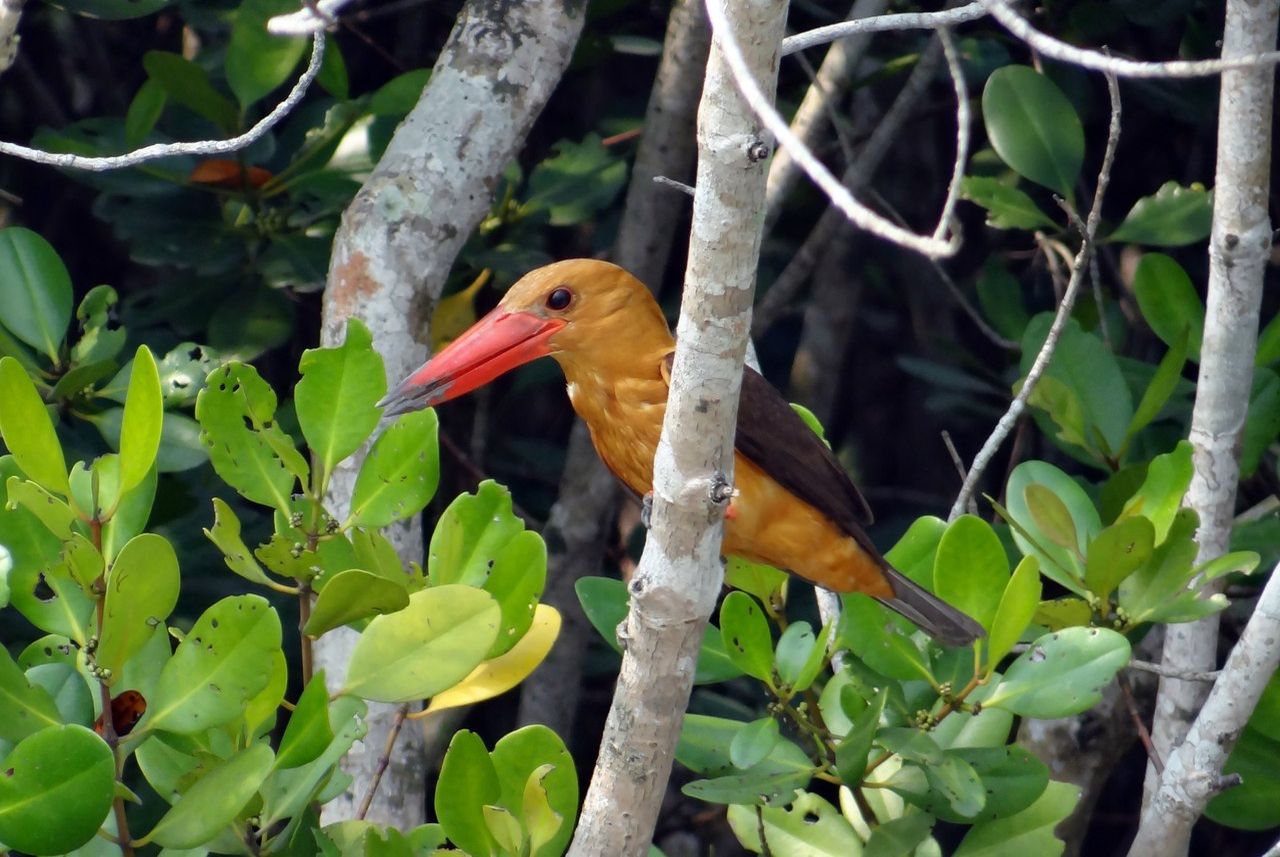 At 8.45 am there was some excitement. Freshly made tiger foot prints could be clearly seen in the silt. We followed the trail along the mud flats but these trailed off into the mangrove and away from sight.

Happily, a traditional South Indian breakfast of rice bread, udden dahl and rice – sambar powder sauce, lentils, tamarind and tomato and some peanut chutney on the side – was served and did much to dampen the disappointment. 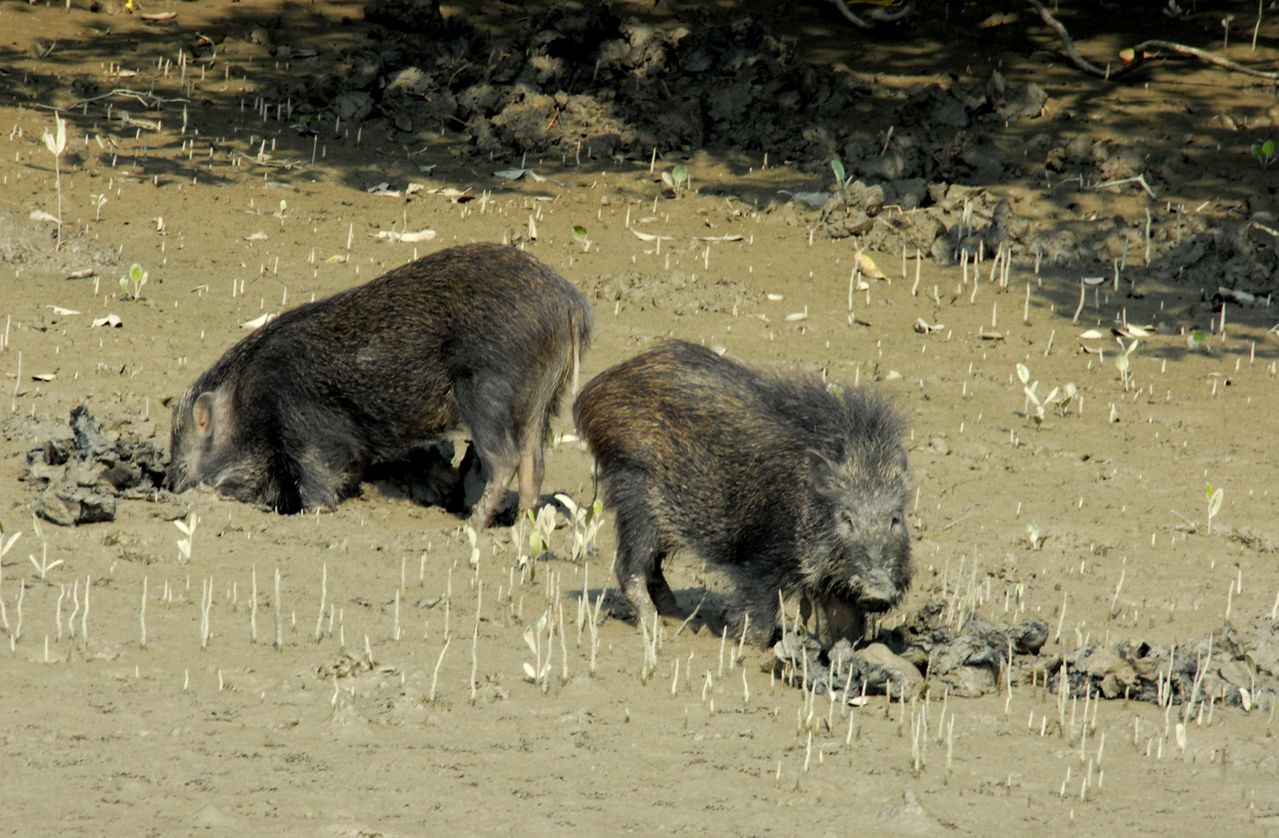 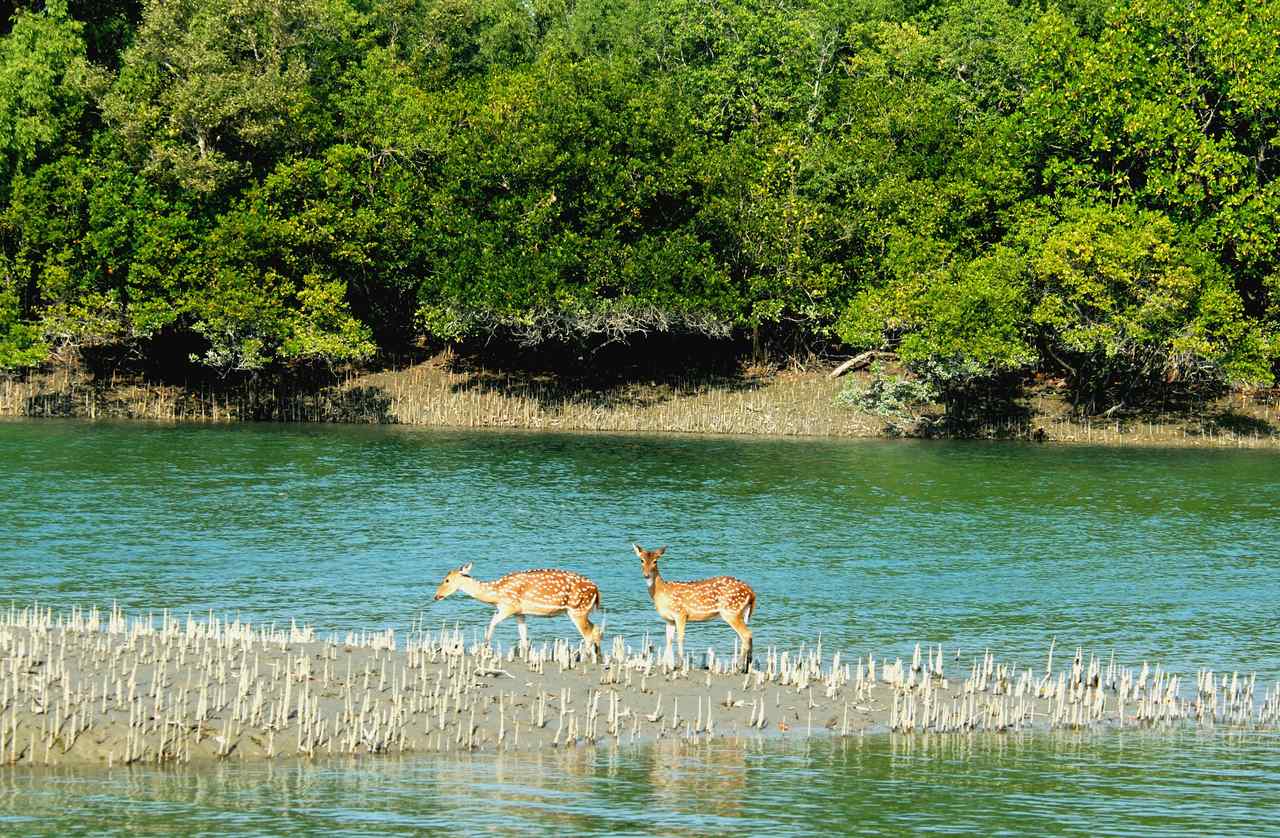 Eventually we reached Five River Junction. It was pretty sedate and we were treated to sightings of spotted dear, the odd boar, plenty of birds and a huge dollop of intensely beautiful scenery. And a small boat carrying a handful of fishermen. 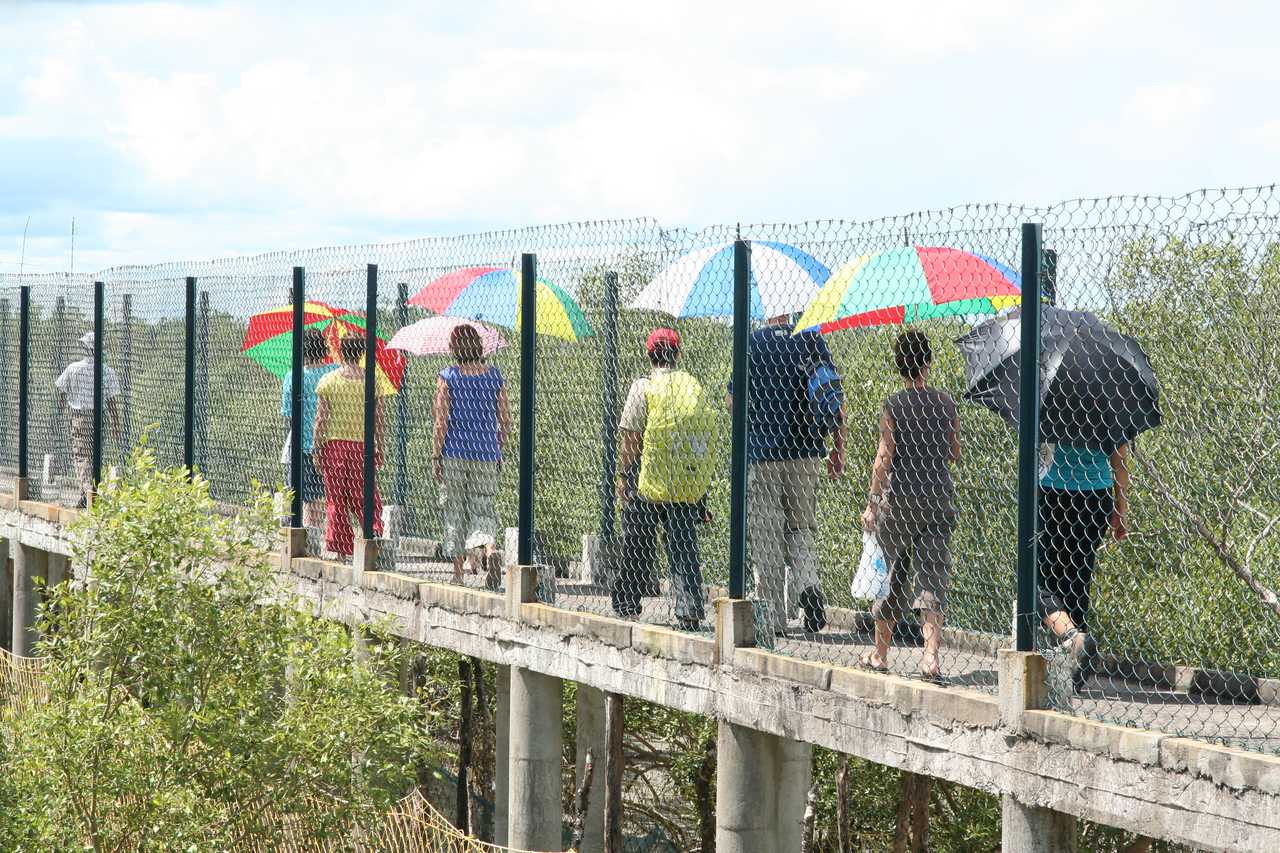 By 1pm we arrived at the Do Banki camp where there is a Canopy Walk and so we took the opportunity to stretch our legs. This canopy walk is about half a kilometre long and at a height of about 20 ft from the ground. If you are lucky you will see Chital deers or Brahmini Kites and if you are extremely lucky you will see a tiger. We weren’t.

The second morning we were up with the sun and on the water by 6.30am. Today, there was (comparatively) a rush hour on the wild life highway. A troop of 30 or so monkeys lined the coast for a mile or so.

It was magnificent to watch them and also the egrets that mingled nonchalantly among them punctuating the cuppocino hued monkeys, and smudges of dark beige of the mud flats with the bright white of their long white necks and feathers.

Further along we spotted Spotted dear loitering and nuzzling each other. After a local style breakfast it was silent again with a smidgen of excitement at the sight of another wavy and highly tantalising line of fresh tiger tracks.

We followed them but yet again they trailed off into the forest. “The difficulty,” said Avijit “is that you can only spot a tiger if it come out onto the open mud flats and these are only exposed at low tide”. 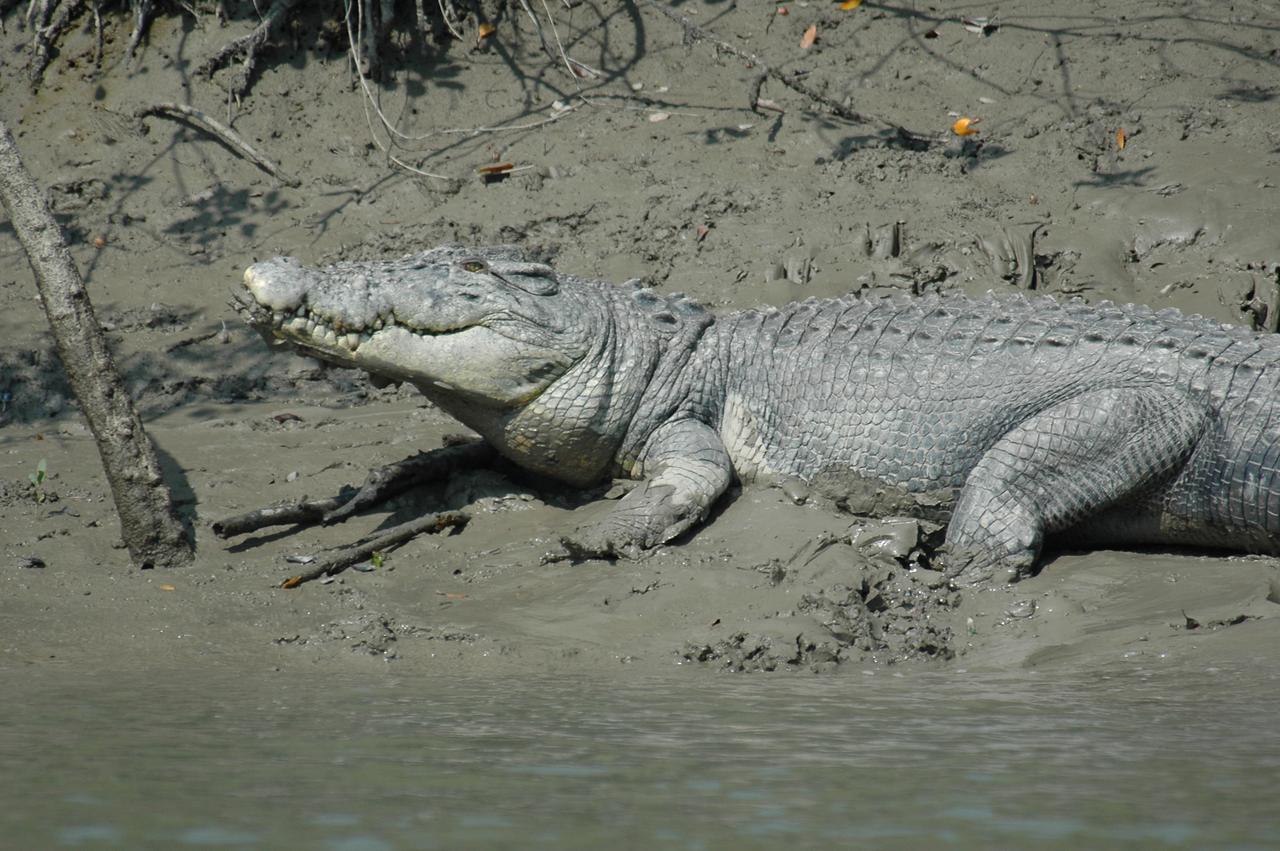 But we did see a small jungle cat, a couple of otters and a wild boar. Later on the Bidia River we almost missed the sighting of a lazy crock whose skin was camouflaged with the ground beneath. It was laying on the mud flat soaking in the rays only giving itself away with a slight movement of the tail before it flitted off.

We were told stories of dolphins around Bidia River but we couldn’t find any. So we headed towards a flock of lesser whistling ducks by following their distinctive rasping call. These duck-like birds are only found in this part of the world and come with chestnut chests, long necks, eat only at night and can perch on trees.

Back at Waxpol I found myself reflecting on two long days exploring the rivers with no tiger sightings to show for it. I consoled myself with the thought that spotting a tiger was always going to be unlikely and it even took Avijit (the naturalist) eight years to bag a picture.

But then I bumped into the honeymooning couple. They were delighted to be showing off pictures of a tiger they had spotted within ten minutes of leaving Waxpol that morning. I had no words (that can be printed here)!

There is no doubt that the Sunderbans has a beautiful soothing landscape with its crisscrossing rivulets, creeks and verdant forests. But spotting a tiger is as unlikely as winning a tenner on the lottery; but as the honeymooners proved, it does happens.

10 fantastic travel offers to get you excited about 2018