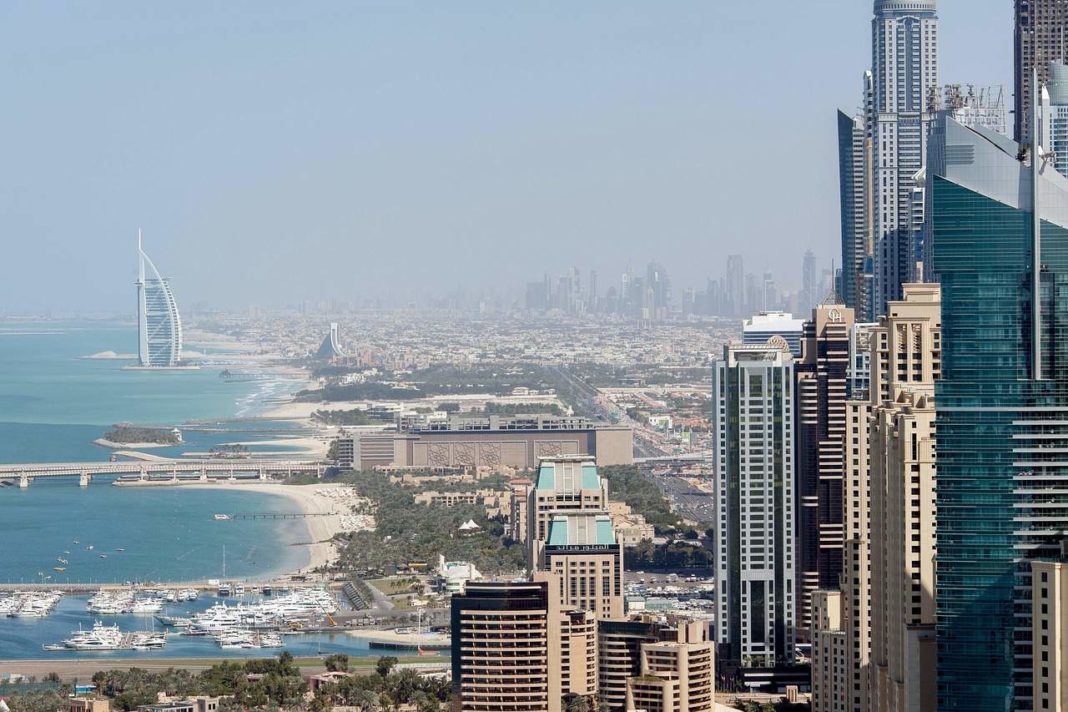 Once upon a time, Dubai, the Gulf Emirate, was just a sleepy trading post and fishing village mostly made up of sandy desert. Today it is built up with skyscrapers that hem the Creek (the natural sea-water inlet which cuts through the heart of old Dubai) and five star hotels that overlook the beach.

Shopping is very much on the agenda and shoppers have a tough time choosing between at least seventy shopping malls.

This was all the brain child of the enterprising Sheickh Maktoum and his family who realised that oil reserves were one day going to run out and a new revenue stream would be needed to fund the future of Dubai. What better way to entice overseas money than to make a hedonistic playground for the rich?

This cunning plan has paid off big time; expats at every corner, malls galore, hotels with underwater resorts, and a palm-shaped resort built outwards towards the sea.

You can still find the souks (Arab markets), or catch an abra (a small water taxi) to get you around the old part of town where the exotic Arabian culture still reigns.

Here are our 10 must visits/dos for any visitor to Dubai:

Catch an abra and take a trip along the Dubai Creek. This sea water inlet cuts through Dubai and is the quickest and most quaint way to become acquainted with the old trading port and the dhows (a dhow is a traditional Arab sailing vessel with one or more triangular sails). It’s also the ideal way to criss cross the Creek from the Souks of Eira to those on the Bur Dubai side.

For an hour-long historical trip, flag an abra from the embarkation point to the mouth of the Creek and further long to the Maktoum Bridge. On the way you will take in many of Dubai’s landmarks.

Birdwatchers should hang around at the inland end of the Creek because this is a large shallow lagoon which has been turned into a wildlife sanctuary. Migrating birds love it here and 27,000 have been spotted at one time during the autumn migration. Check out the Greater Flamingos who call this home all year round.

If you find it hard to believe the ‘Dubai was once just a sandy sleepy port and fishing village’ story, then a visit to this interactive (and air-conditioned) museum will dispel any doubts. Check out the first written reference to the sleepy fishing village and trading port, penned in 1580 by Venetian jeweller Gasparo Balbi who passed through seeking pearls. There are countless pictures of Dubai before the developers took over showing a Dubai without the razzamatazz. In fact, you will get to see fine alabaster objects dating from the Bronze Age, 3,000BC .

There’s also life size displays such as dioramas (a model representing a scene with three-dimensional figures) and costumed mannequins portraying various aspects of life in Dubai. The museum is housed in the 18th century Al Fahidi Fort, which is probably the oldest building in Dubai.

You can shop with the locals here – well, mainly women in Islamic purdah – for household goods. Or follow your noise to the spice section and choose from sacks full of cardamon, frankinscense, ginger, dried lemon, almonds and apricots.

This market has street after street that glitter with gold and all manner of necklaces, rings and jewellry. If you like garish, you’ll find it here among the gold, diamonds, rubies, emeralds, opals, amethysts and pearls that decorate the windows.

Tip: If you find yourself in a souk, this phrase may come in handy: Anta tamzah rhair-ly jidan which means You must be joking, that’s too much!

Mall of the Emirates

The marble clad Mall of the Emirates mall has all the designers selling their wares. This is also home to Ski Dubai which has five powder pistes and the world’s first and longest (400ft) indoor black run. There’s also a chairlift and two Alpine-themed restaurants.

Ibn Battuta shopping mall on the Sheikh Zayed Road is thought to be world’s largest themed shopping mall. Inspired by explorer Ibn Battuta the mall offers 275 outlets arranged over 6 country-themed courts whose ambience is created with intricate and detailed decor. The countries are China, India, Persia, Egypt, Tunisia and Adalusia – the places that Ibn Battuta had visited. You will find many of the familiar names such as Debenhams, Marks and Spencer, Decathlon and Montblanc.

There is also a a multiplex cinema, ten pin bowling and a five-star hotel.

This world famous iconic hotel, shaped as a sail, is the most distinctive in Dubai. This billion dollar hotel stands alone on its own artificial island and overlooks the Jumeirah Beach. It has self-styled itself as the world’s only seven star hotel, which some dispute, but at 321 metres (1053 feet) it is the fourth tallest hotel in the world.

This is one of the most expensive hotels in the world offering 202 duplex two-floor suites instead of rooms (some with rotating beds) and has the tallest atrium lobby in the world (180 metres/590 feet). In its heart is a dazzling waterfall and fountain combined with a light show.

At its top is the Al Muntaha restaurant which offers superb panoramic views. On its lower level is the Al Mahara restaurant accessed via a simulated submarine. At its centre is a mesmerising aquarium full of colourful fish and plants that are found in the Arabian Gulf.

This mosque must be the most photographed piece of architecture in Dubai. It is made entirely of stone in the medieval Fatimid style with two minarets. At night, the mosque is lit up and quite beautiful to behold.

Located on the Bur Dubai section near the Ruler’s Court was newly rebuilt in 1998. The mosque is quite an eyeful of beautiful architecture. It has nine large domes alongside another 45 domes and the largest minaret in the city (70 metres high). Interior is closed to non-Muslims.

Designed like an Arabian wadi (oasis), this is a 12-acre water theme park offering 30 different rides and slides. If you like water sports, this child-friendly water park is for you.

9Palm Islands and The World

They say Palm Islands (Palm Jumeirah and Palm Jebel Ali) are so big you can see them from space. These man made islands designed to look like palms using land reclamation expertise, are intended to be the largest man-made islands in the world that will be home to over a million people. The Palm Jebel will have an aquatic park, the Palm Jumeirah has a mix of residential housing and hotels. These are accompanied by ‘The World’ – a series of 300 offshore islands that represent the world.

LEGOLAND at Dubai Parks and Resorts

This year, (2016) two amazing theme parks have been created to enthrall family visitors.

The new £3bn Dubai Parks and Resorts resort on Sheikh Zayed Road opposite the Palm Jebel Ali opened on October 31st and is hailed as the Middle East’s largest multi-themed theme park. Pick your favourite space from Legoland and its Water Park, Bollywood Parks and the Hollywood-themed Motiongate.

This theme park has collabroated with Marvel and the Cartoon network which will appeal to superhero fans who may love the idea of interacting with Doctor Ocopus, Spider-man and the Avengers. Or even dining at Iron Man’s 10-story high sky deck diner.