The size of Western Europe, but with scarcely a person in sight, the extensive wildernesses and quirky cultural sites of Kazakhstan demand thorough exploration.

Kazakhstan, a former Soviet Republic, is a vast and rarely explored expanse on the map, south of Russia and to the west of China. Many of us have only even heard of the country thanks to Borat, but the view that film created was incomplete and highly controversial. There’s far more to Kazakhstan than you might expect.

The southeast of Kazakhstan is the country’s tourism sweet spot, with the Altyn Emel National Park, Charyn Canyon, Shymbulak, and Kaindy Lake all surrounding the former capital of Almaty. Moving west into the great Eurasian steppe, there’s the UNESCO site of Turkistan and, in the middle of absolute nowhere, the Baikonur Cosmodrome, the launchpad for the Soviet space programme.

Avid travellers can then venture further west to the Aral Sea (or what’s left of it), or north to Astana, the brand new capital with its futuristic architecture.

Also read: Central Asia steps out of the shadows in 2017

Since 1 January this year, Kazakhstan has been visa free for many nationalities and as the country will host the World Fair in summer 2017, it’s the perfect excuse to go. 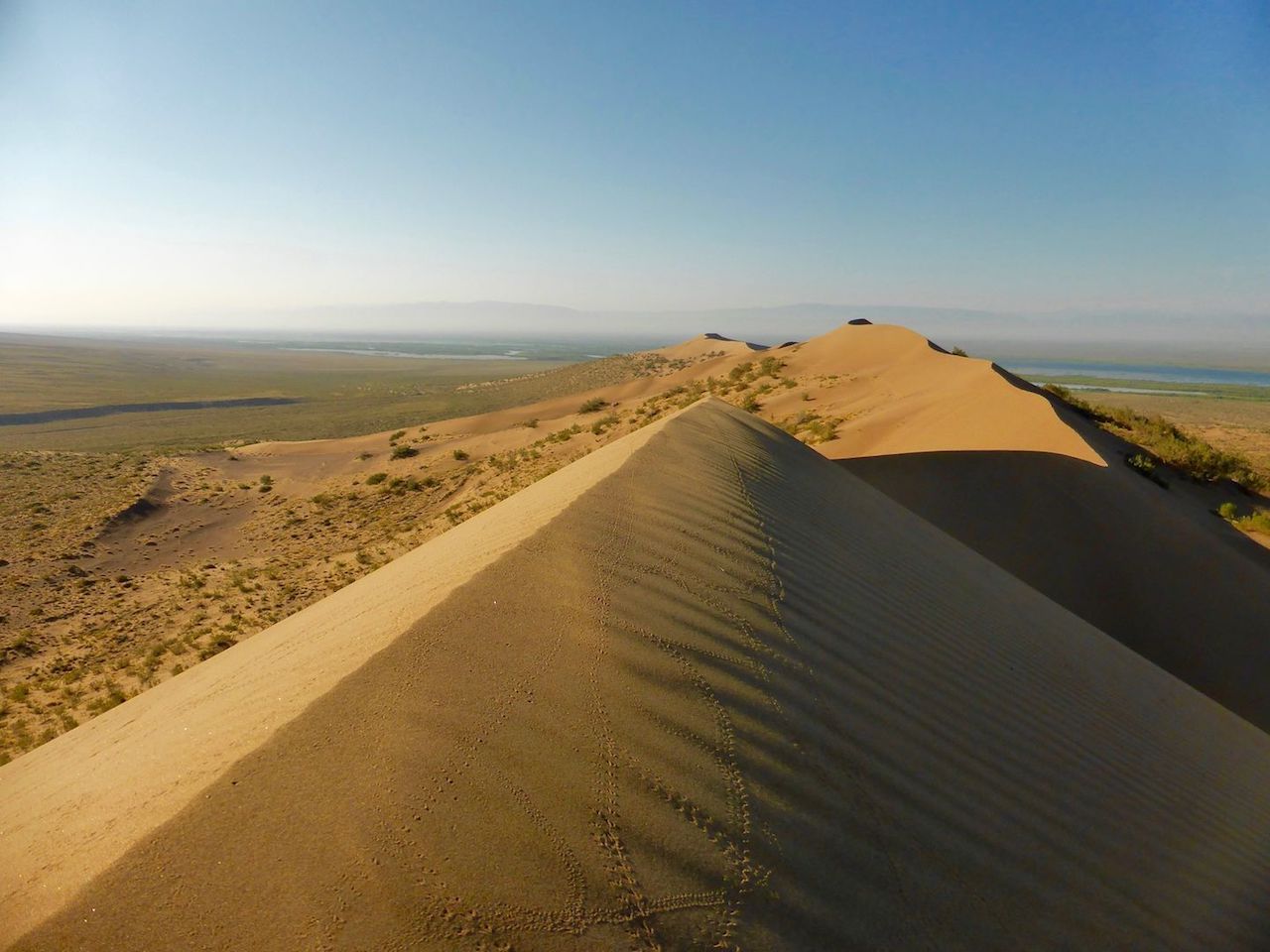 The Singing Dunes (also known as Singing Barkhan or Singing Sand) is a mountain of sand in the Altyn Emel National Park – itself a stretch of desert and canyons across 4,600 square kilometres.

These naturally occurring dunes are an impressive 150m high and 1.5km long but what makes them phenomenal is that they sing out a whistling sound when the wind skims across the sands. Beware: the sound can be as much as 105 decibels loud.

Access is easy from Almaty into the national park, especially if you have a 4×4 as the drive takes around an hour and a half. The entry fee is 962 tenge, the local currency (£2.47/2.98 euros). Once there you can climb the dunes on foot.

Charyn Canyon is within the Charyn River valley which practically kisses the Chinese border. It might not be as deep as the Grand Canyon, but its steep sides and colour gradations make it equally as impressive.

If you watched Ewan McGregor and Charlie Boorman in The Long Way Round, you’d have spotted the canyon then as it was one of the highlights of their route.

There are opportunities for white water rafting and canoeing on the Charyn River, and hikers can explore both the canyon and the striking red rock formations of the Valley of Castles on an extended trek. 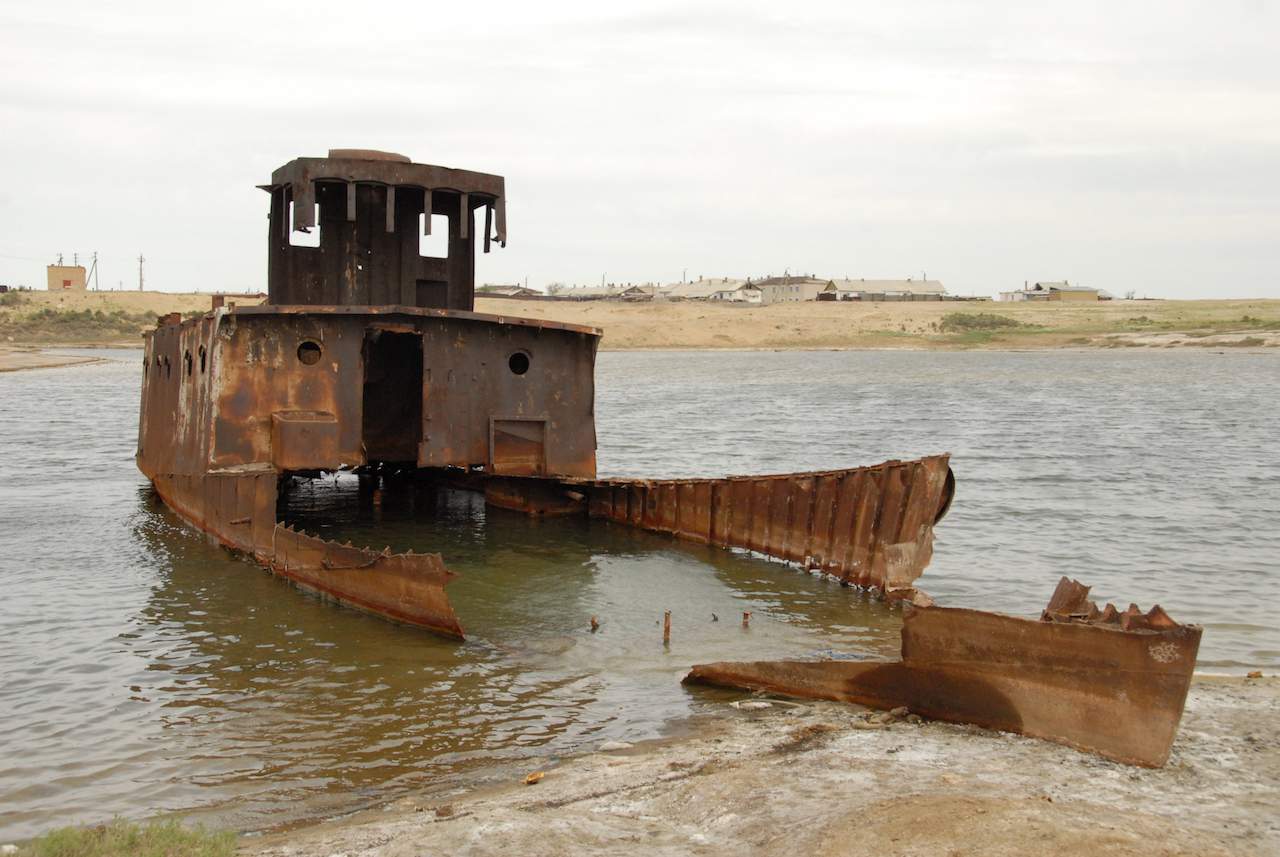 The shrinking of the Aral Sea is one of the great environmental disasters of the 20th century: in the 1960s it was one of the four largest lakes in the world, but today it’s only a fraction of its original size. Poorly planned Soviet irrigation schemes diverted its water supplies, and the Aral Sea dried up. It’s an important place to visit, however, to see first hand the devastating potential impact of human intervention in nature. The skeleton ships in the sand, now miles away from open water where they might sail, are a poignant reminder of the past.

You might not think of Kazakhstan as a winter sports hub, but the ski resort of Shimbulak just a short 30 minute drive from Almaty, hosted the Winter Asian Games in 2011, and bid (albeit unsuccessfully) for the 2014 and 2022 Winter Olympics, too. You can ski at Shymbulak from November until May, and the lifts go up to the Talgar Pass at 3,200m. In total there are around 20km of pisted runs, plus some excellent, affordable opportunities for heli-skiing. The resort’s ski jump overlooks Almaty and the views for the top are spectacular, even if you’re not intending to jump.

Almaty is the former capital of Kazakhstan, a charming city surrounded by mountains. It remains the commercial and cultural heart of the country, with plenty to see and do. Highlights here include the photogenic Zenkov Cathedral, the Kok Tobe cable car, and Almaty Opera House. The Kazakhstanis have quite a fondness for the UK and Ireland, so keep your eyes peeled for the statue of The Beatles, erected by a Kazakh fan, and also Mad Murphy’s Irish Pub. 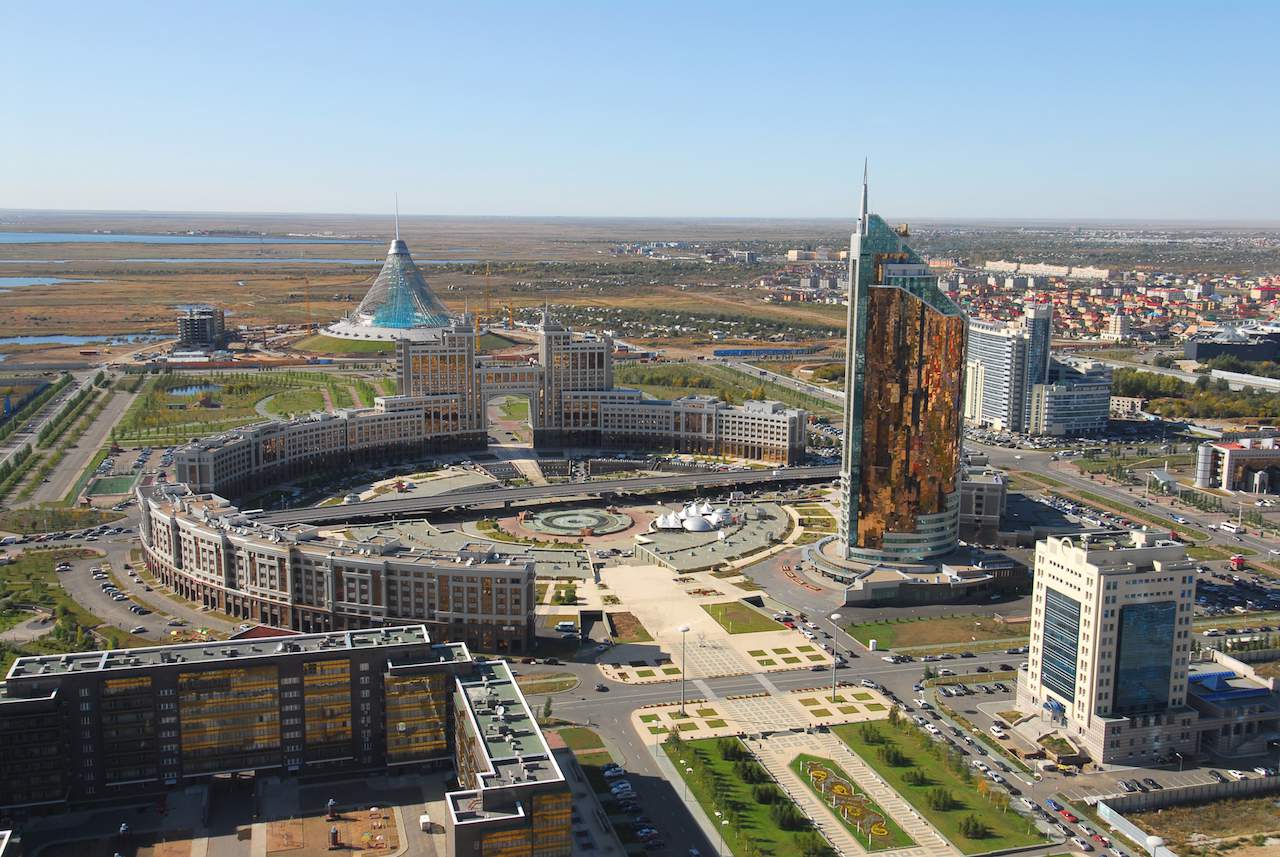 The Khan Shatyr is the most famous building on Astana’s skyline, and its claim to fame is that it’s the world’s biggest tent. Designed by Norman Foster, this iconic structure houses an indoor beach resort, boating river, shopping mall, and concert hall. It’s temperature controlled so it’s always balmy inside, even when the mercury falls to -40 Celsius outdoors. Andrea Bocelli sang at the Khan Shatyr’s opening, with the presidents of Kazakhstan, Russia, Turkey, Ukraine, Armenia, and Belarus in the audience, so you’ll be the latest in a long line of international visitors. 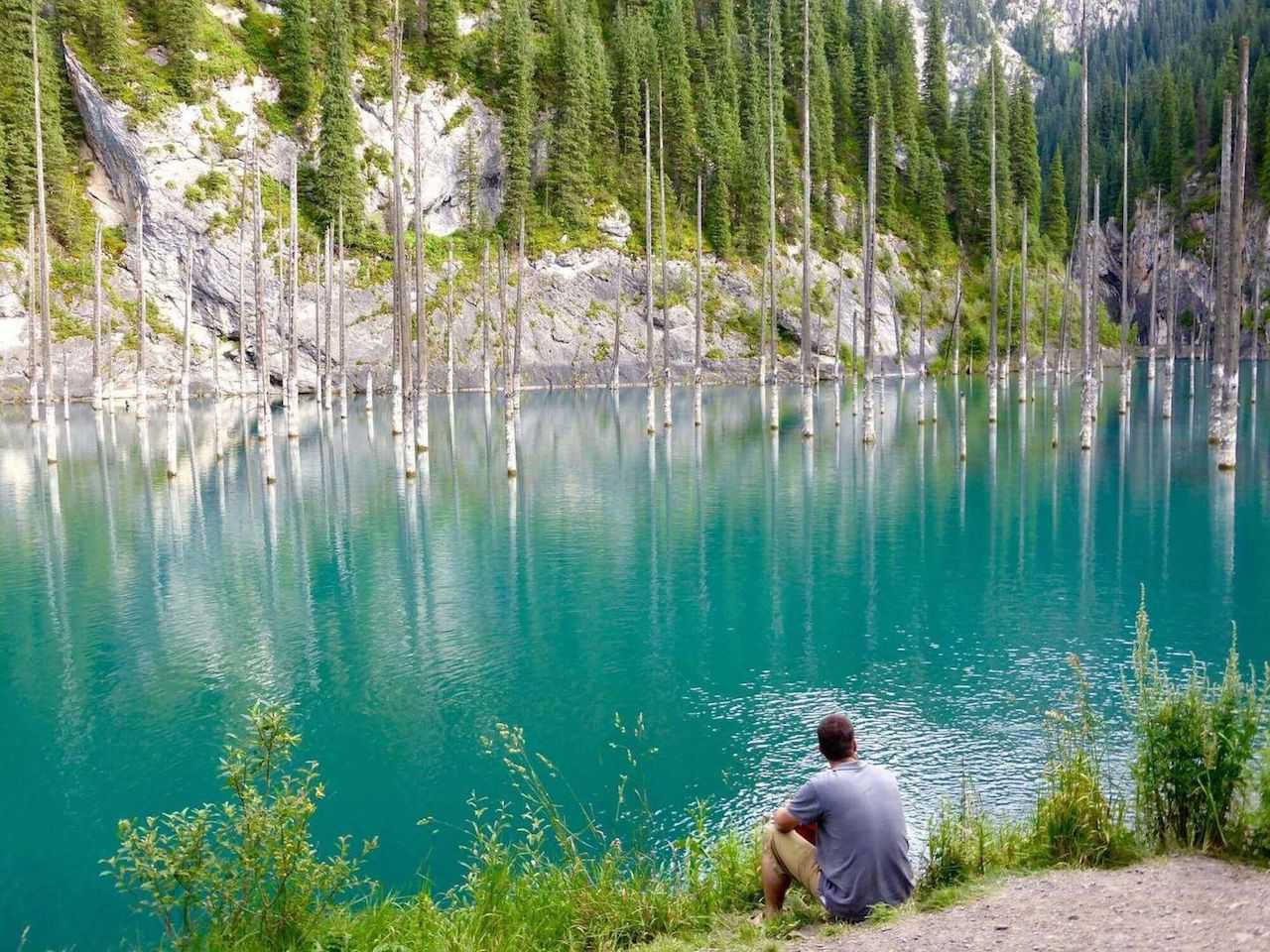 Hidden in the Tien Shan Mountains, Lake Kaindy is a relative newcomer to the landscape made by a landslide in 1911. With water that shifts from turquoise to emerald green depending on the light, it’s particularly scenic to walk here, either on a day trip from Almaty or on a longer trek. Siberian roe deer graze on the lake shore, there’s a large amount of bird life, and the lake is also good for trout fishing. This is somewhere you’ll want to retreat to and spend a while, watching the reflections and ripples on the water. 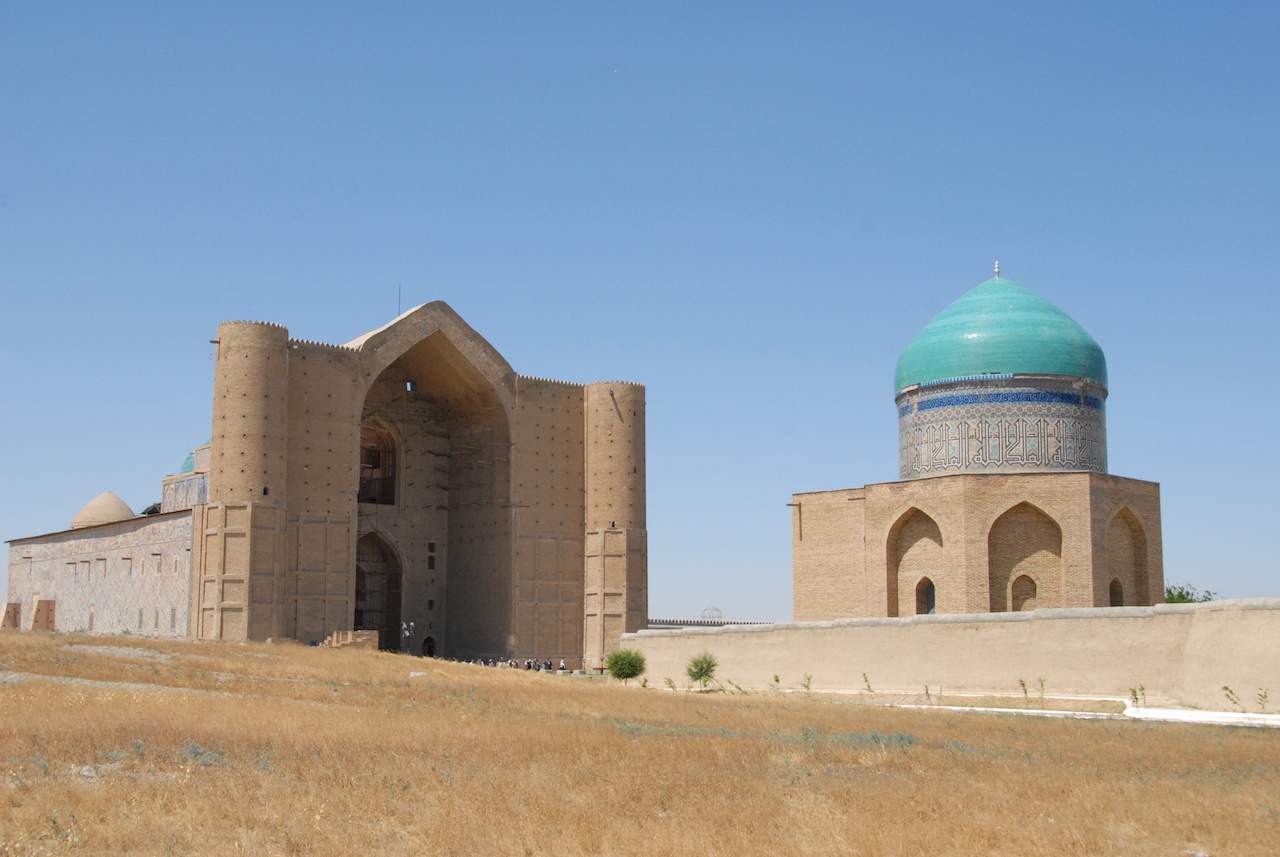 Kazakhstan was on the Silk Road, and there was a substantial commercial centre at Turkistan at least by the 4th century AD. An important Sufi saint, Khodja Ahmed Yassawi, preached and was buried here. His medieval mausoleum remains an important pilgrimage site, recognised as a World Heritage Site by UNESCO.

Kazakhstan has relatively few surviving historic sites from this period, unlike neighbouring Uzbekistan, so Turkistan should be treasured even more. 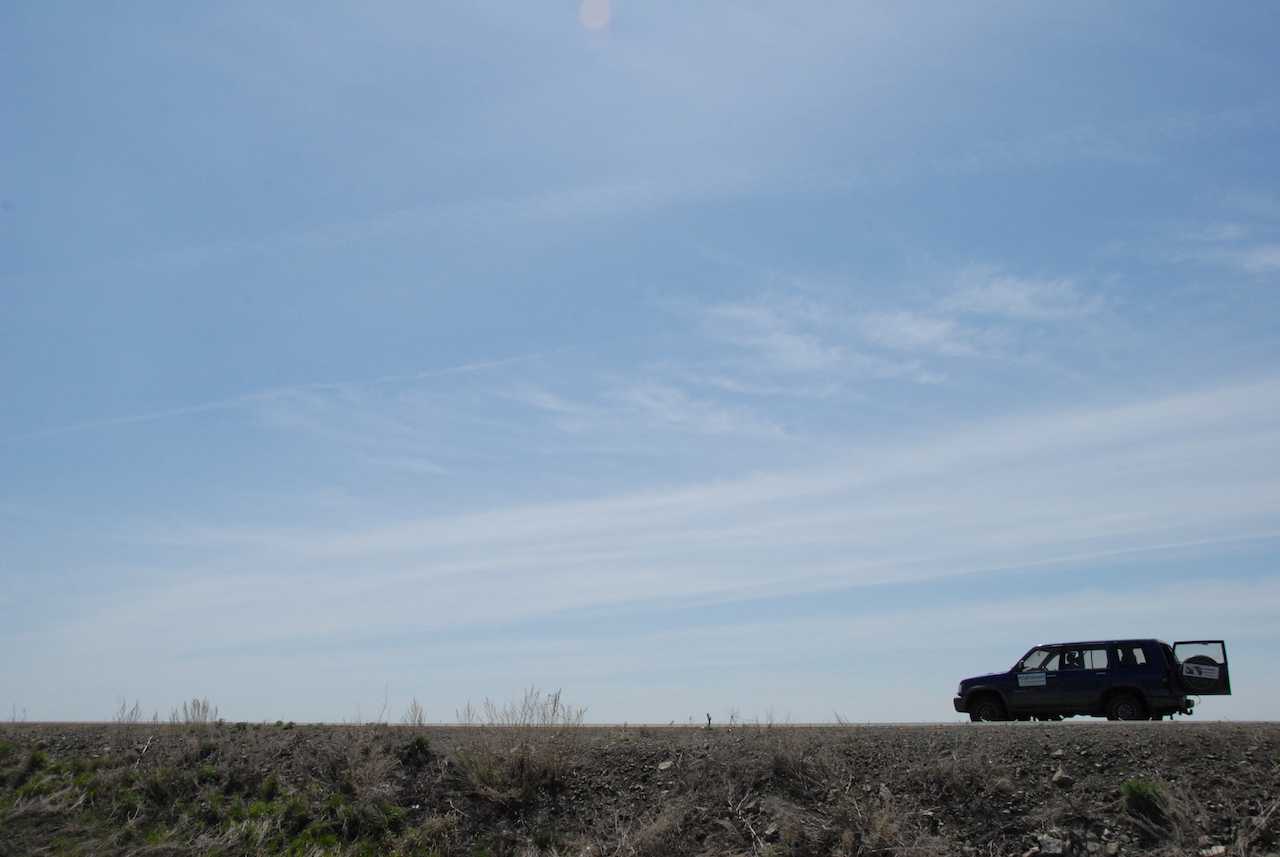 The steppe is a seemingly endless expanse of grassland, arid and almost completely flat. The Eurasian Steppe covers much of Kazakhstan, but though at first it seems empty, it has its own peculiar beauty, and plants, people, and animals do actually live here. There’s something very special about driving straight for hours with nothing changing on the horizon, and about waking up in the morning in a tent, knowing that you’re the only person for miles.

The Soviet Union launched its space flights from the Baikonur Cosmodrome in Kazakhstan’s desert steppe of Baikonur, (remember Sputnik 1?), and it’s still used for launches to the International Space Station.

Though bureaucratic and expensive, it is possible to get permission to enter the cosmodrome, watch a launch, and visit the on-site museums with their collections of space craft and related technologies.

That said, if you’re travelling on a budget, it might be easier to park your vehicle some distance off and watch the spectacle unfold in the sky from there.

PACKAGE: You’ll get the most out of your visit if you join an organised tour. Kalpak Travel’s Highlights of Kazakhstan combines a visit to the Astana Expo with the Singing Dunes of Altyn Emel National Park, Kaindy Lake, Charyn Canyon, and the UNESCO World Heritage Site of Turkistan.

VISA: EU passport holders can enter Kazakhstan visa-free for up to 30 days. Your passport needs to be valid for six months. Other nationals should check with their local Kazakh embassy for the latest visa requirements.

BEST TIME TO GO: Kazakhstan is a year-round destination, with hiking and sightseeing in summer and skiing in winter. That said, the winters are bitterly cold and with a great deal of snowfall, so the ideal time to visit is between April and October.

REASON TO GO: This year Kazakhstan will be hosting the World Fair: it starts in Astana on 10 June and will run until mid September. The theme is Future Energy, and more than 100 countries will have national pavilions in the exhibition grounds. The fair showcases the industry, technology, and cultural achievements from countries around the world, and this is the first time since its foundation in the 1850s that it will take place in Central Asia.

Note: Getting to Kazakhstan is straightforward enough; getting around the country can be more of a challenge due to the large distances involved and relatively under-developed infrastructure.