Like many cities in Germany, Wiesbaden in the western state of Hesse, has winding, cobbled streets, dramatic neo-Gothic churches, neatly gardened parks and impressive architecture. Unlike many German cities, many of these buildings are the originals.

This is because Wiesbaden only suffered a small amount of damage from allied bombings in the Second World War when 450 Lancaster bombers were deployed in 1945 to ravage the city, but foggy weather caused most of the bombs to miss their mark.

Today Wiesbaden which means “meadow baths”, is a pretty, peaceful place, best known for its natural springs and its vineyards.

Check out the architecture

Grab your walking boots and get up close to the city’s spectacular examples of architecture. In the Palace Square there is an impressive neo-Gothic church, the Marktkirche, which stands at an intimidating 98m high. Grand villas and Art Nouveau buildings line the streets and you can also visit the grand Baroque residence of Biebrich Palace, which is an hour’s walk from the Marktkirche – the church on the market square. 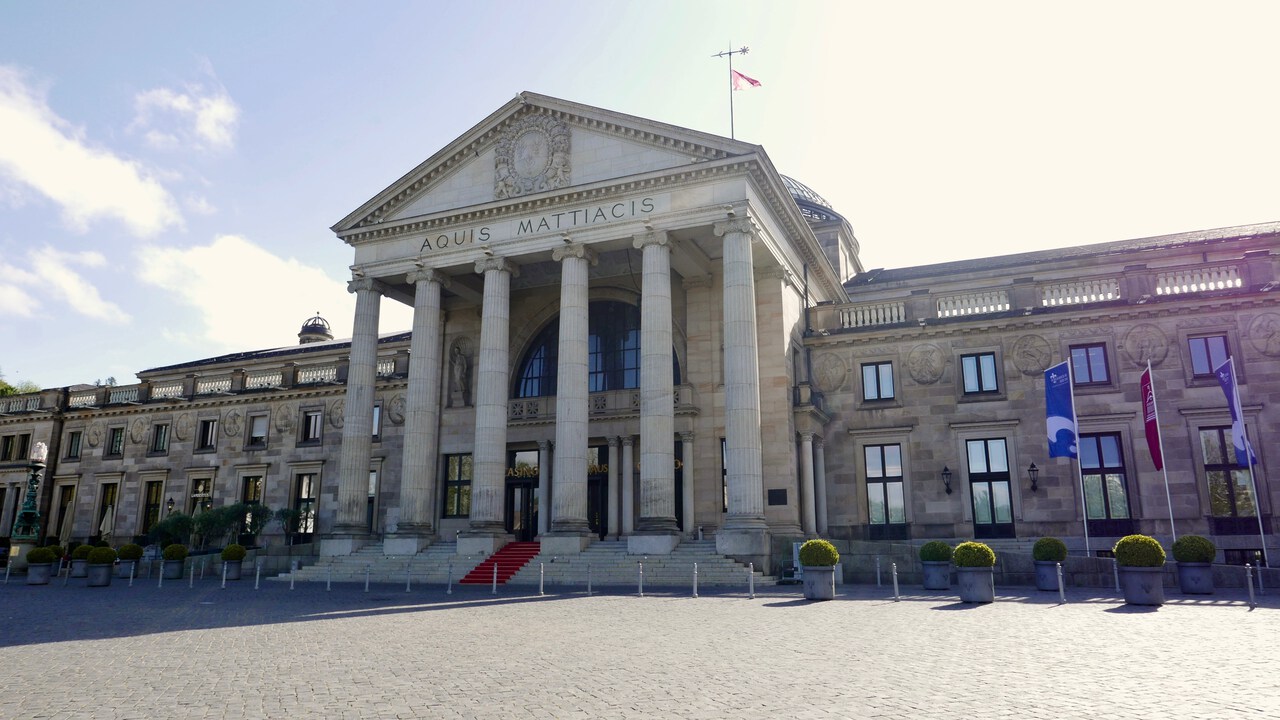 From the Palace Square you can take a stroll along the sycamore tree-lined Wilhemstraße to the Wiesbaden Kurhaus, the city’s main events venue. This spectacular building overlooks a large, open park.

It once served as a spa and was converted into a concert hall and casino in 1907. It became occupied by the US army as a military broadcasting station in WWII and was later  restored and reverted to being casino, dance hall and concert venue. It is rumoured that this was where Elvis met Priscilla.

The casino costs just €2.50 to enter, but it remains a popular a hothouse for the rich and famous, willing to bet their fortune on a game of French roulette. The interior is decorated with ornate chandeliers and gold furnishings, celebrating the opulence of a bygone era. 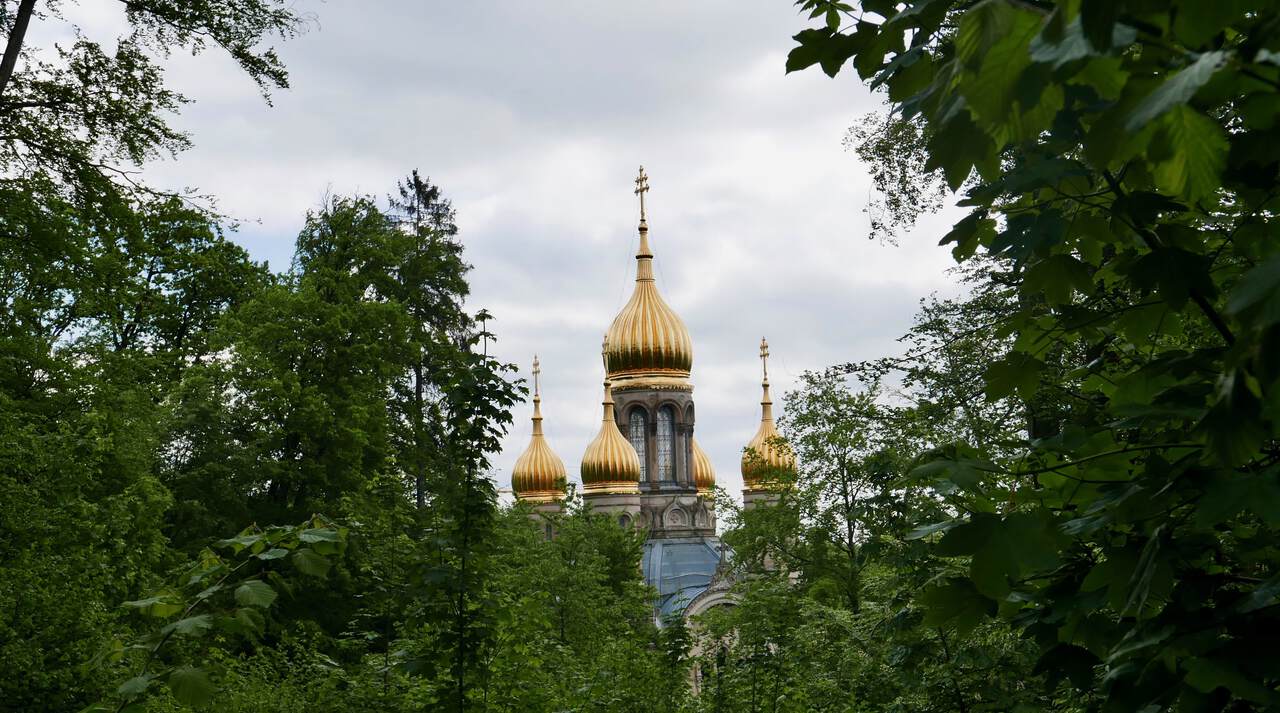 Escape to nature and take the water-powered Neroberg cable railway to Wiesbaden’s hillside. From here, you can walk along the nature trail and enjoy some fantastic views of the city. Hidden amongst the trees is a Russian Orthodox Church with five gold spires that glisten in the sunlight.

The hillside is also home to a winery and one of the few inner city vineyards in Germany. Learn about the region’s wine making and enjoy a glass of Riesling on the hillside with Kloster Eberbach wine tasting tours.

It’s all about the spa

Wiesbaden is one of Europe’s oldest spa towns and dates back to the Roman Empire. At one stage they had 26 hot springs – as of 2008 fourteen remain flowing.

The springs are said to produce healing water that can alleviate joint pain and aid with various health issues. One of the city’s most famous hot springs is the Kochbrunnen, which resembles a rusty mushroom and smells strongly of eggs.

Some of the locals drink from the spring to take advantage of its healing properties. I can confirm it tastes about as good as it smells. 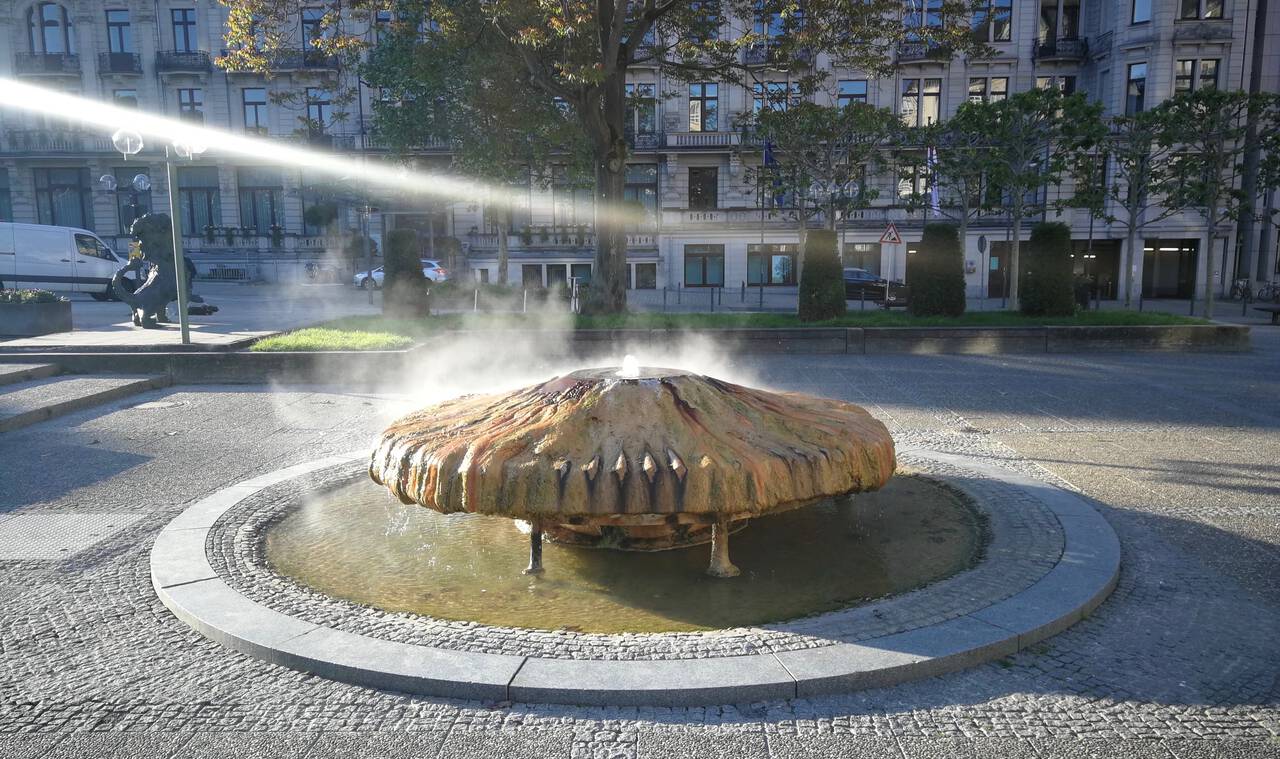 Wiesbaden also has a number of excellent thermal spas. The Kaiser-Friedrich Therme is a traditional bathhouse built in 1913, and features grand, pillared spaces and classical decorations which pay homage to the Roman sweat baths.

There are two pools here: a sitting thermal pool that is naturally heated to 37° C and 39°C, and a refreshing cold water pool that is tempered at 21-23° C. The spa also contains various sauna facilities and a Russian steam bath.

Enjoy a glass of wine in Rüdesheim

A short 30-minute train ride from Wiesbaden will take you to the picturesque town of Rüdesheim, which is famous for producing Riesling wines. The town borders the Rhine river and is surrounded by rolling valleys and vineyards, described by many as the German Tuscany.

The quaintly traditional town resembles a Disneyland of old-world Germany, and was much loved by the likes of Lord Byron, the German composer, Wagner and The Brothers Grimm.

From the centre of Rüdesheim you can take a two-person gondola to the Niederwald monument, which was built to commemorate the unification of Germany in the late 1800s. From the monument you can enjoy spectacular views of the Rhine, valley and Rüdesheim. 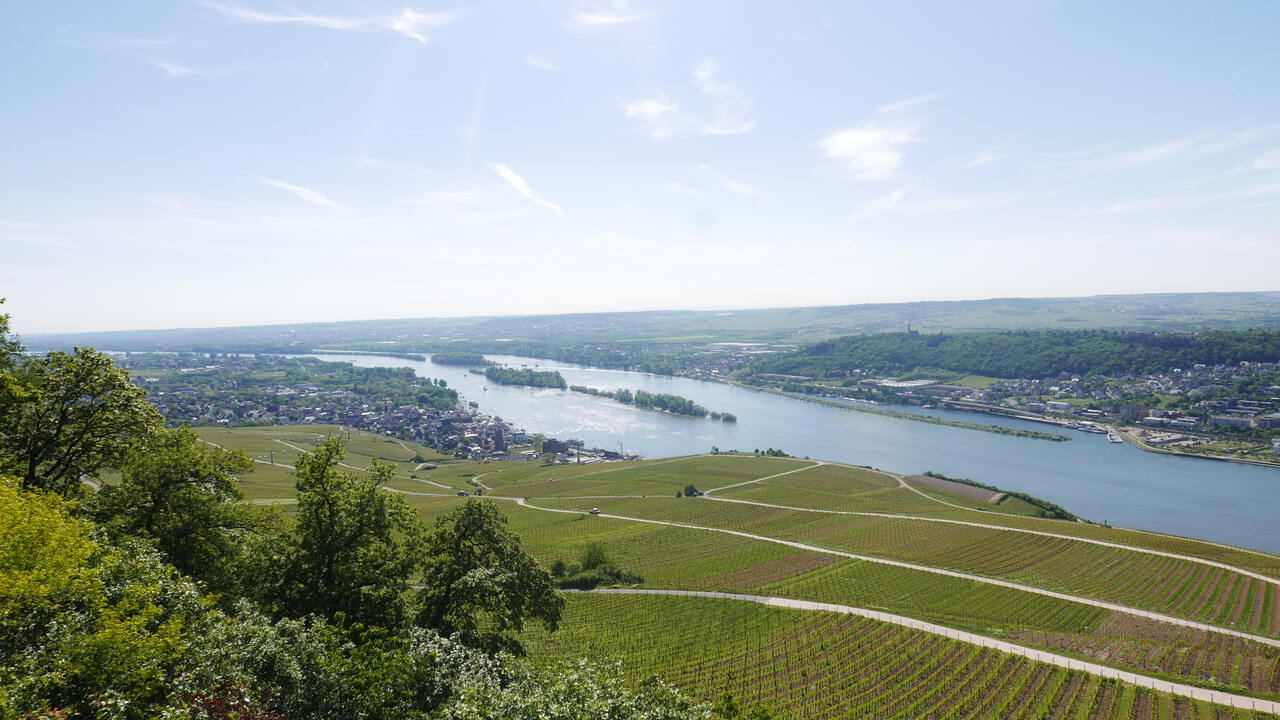 The narrow, cobbled streets of Rüdesheim are lined with cute shops and plenty of places to enjoy a glass of wine. There is even an opportunity to spend a night sleeping in a massive wine barrel at Hotel Lindenwirt.

Get hold of some chocolate

Chocoholics will also love Wiesbaden’s 120-year old Chocolate shop, which is run by the founder’s great grandparents. The Chocolateria Kunder specialises in small chocolate and truffles, and has an experimental edge.

I enjoyed the chilli chocolates and “Venus breast” truffle, whose creations is inspired by Oscar nominated film “Chocolat”. Every month they create a new chocolate and every year they trial a new type of coco bean.

Wiesbaden is full of cosy cafés. Hepa Kaffee near the central square specialises in Brazilian coffee and has a lovely, covered outdoor area which happens to be soundproof.

For something a little more plush the nearby Café Maldaner is a little slice of history. It is the world’s only Austrian coffee house outside Austria, and serves the most sumptuous cakes and chocolates (Tip: try the Maldaner praline). 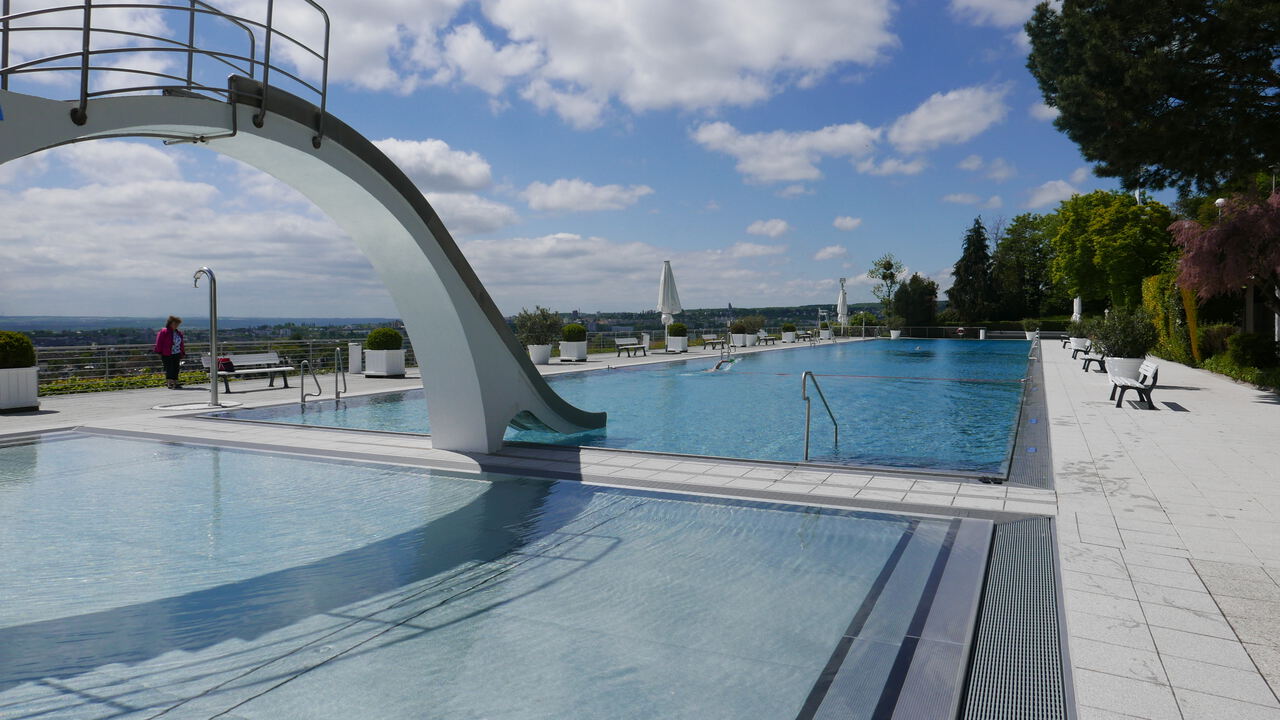 If the weather is fine, take the “Nerobergbahn” funicular and walk to the Opelbad Neroberg. The restaurant is situated next to a lido with wonderful views overlooking the city skyline. The 65m swimming pool, complete with an excellent slide, is designed in the Bauhaus style and is kept at a pleasant 24 degrees (or more). The restaurant serves a selection of local dishes including the highly-favoured white asparagus, which accompanies almost every dish when it is season (February-June). 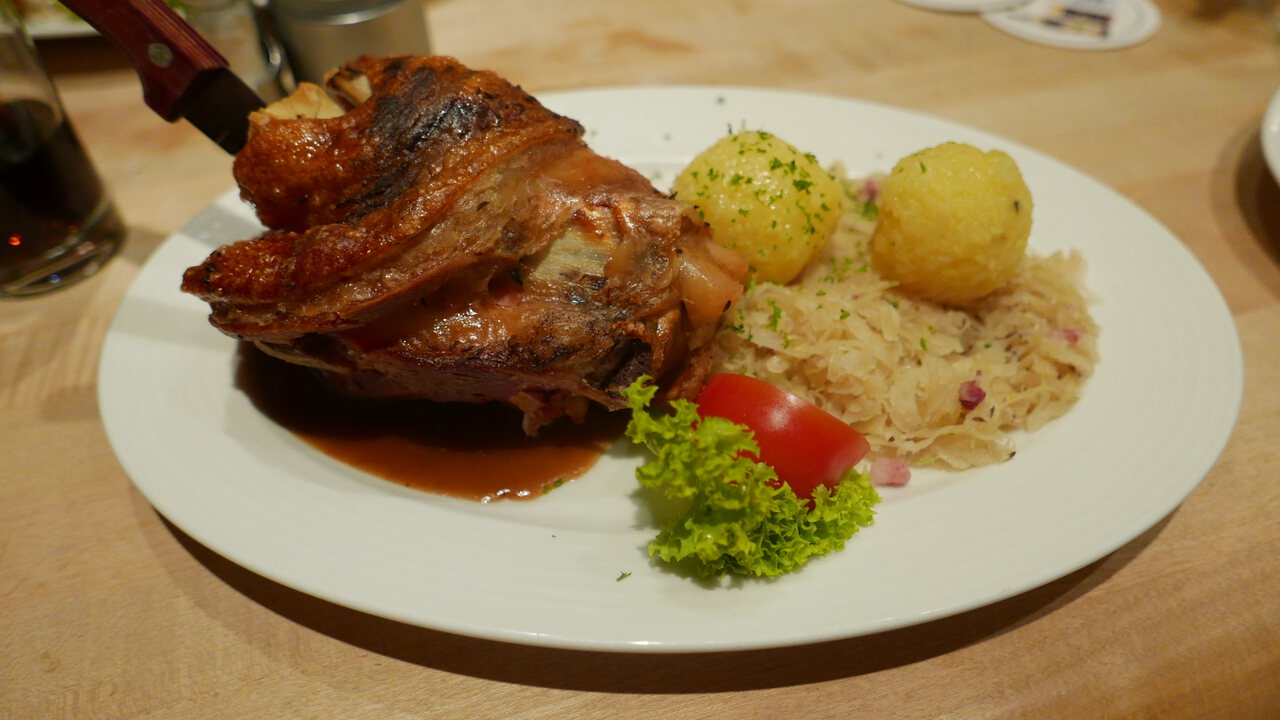 While there is a lot more to German cuisine than meat and potatoes, the lively Weinkeller altes Rathaus (situated below the town hall) does this dish very well. The pork knuckle was perfectly cooked with the crispiest crackling, although there was enough on the plate to feed an army. The whole meal (with wine) also cost less than €25 – bargain! 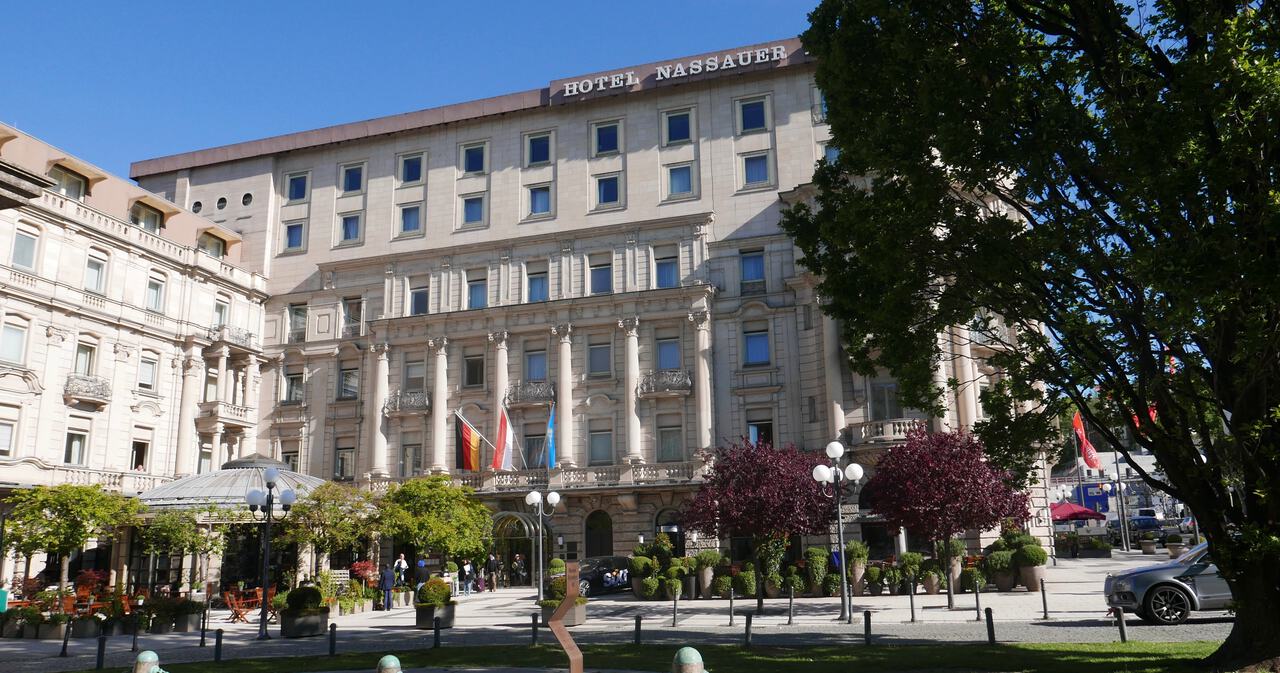 The 5* Superior Hotel Nassaurhof is an upscale hotel that dates to the early 1800s. It sits opposite the Kurhaus and is the only hotel in Wiesbaden with a rooftop thermal pool. Some of the décor here should, in my opinion, be consigned to the history books, but the staff are charming and the location is fantastic. Hotel Nassaurhof also contains Wiesbaden’s only Michelin-starred eatery, Restaurant ENTE.

Wiesbaden is just a short distance from Frankfurt, so it’s very easy to get to from the UK. British Airways and Lufthansa run multiple daily flights to Frankfurt from London Heathrow, London City Airport, Manchester and Birmingham. From Frankfurt, simply hop on a direct train to Wiesbaden and you’ll be there in 40 minutes.