Home WorldEuropeLithuania Travel Guide to Vilnius, Lithuania: what is there to see and do
LithuaniaTravel Articles

Travel Guide to Vilnius, Lithuania: what is there to see and do

Nicknamed ‘The Rome of the North’ and ‘The Jerusalem of Lithuania’, Vilnius has a wealth of historical and religious treasures; not to mention the oldest Baroque old town in northern Europe.

But Vilnius is not just a living museum – it has a forward-thinking, confident charm that is evident in its ever-growing gastronomic scene, lively nightlife and creative arts quarter. And, with low-cost direct flights from many European hubs, the Lithuanian capital is just beginning to establish itself as a real city-break favourite.

A UNESCO World Heritage Site, Vilnius’s Old Town is one of the city’s main draws. It’s got all the ingredients of your stereotypical historic centre – storybook churches, impressive palaces and a web of cobblestone alleyways leading from vast squares.

What might surprise visitors, though, is the size of the old town – although still easily walkable on foot, it seems to sprawl for miles, particularly in comparison to its more compact Baltic counterparts in Tallinn and Riga. 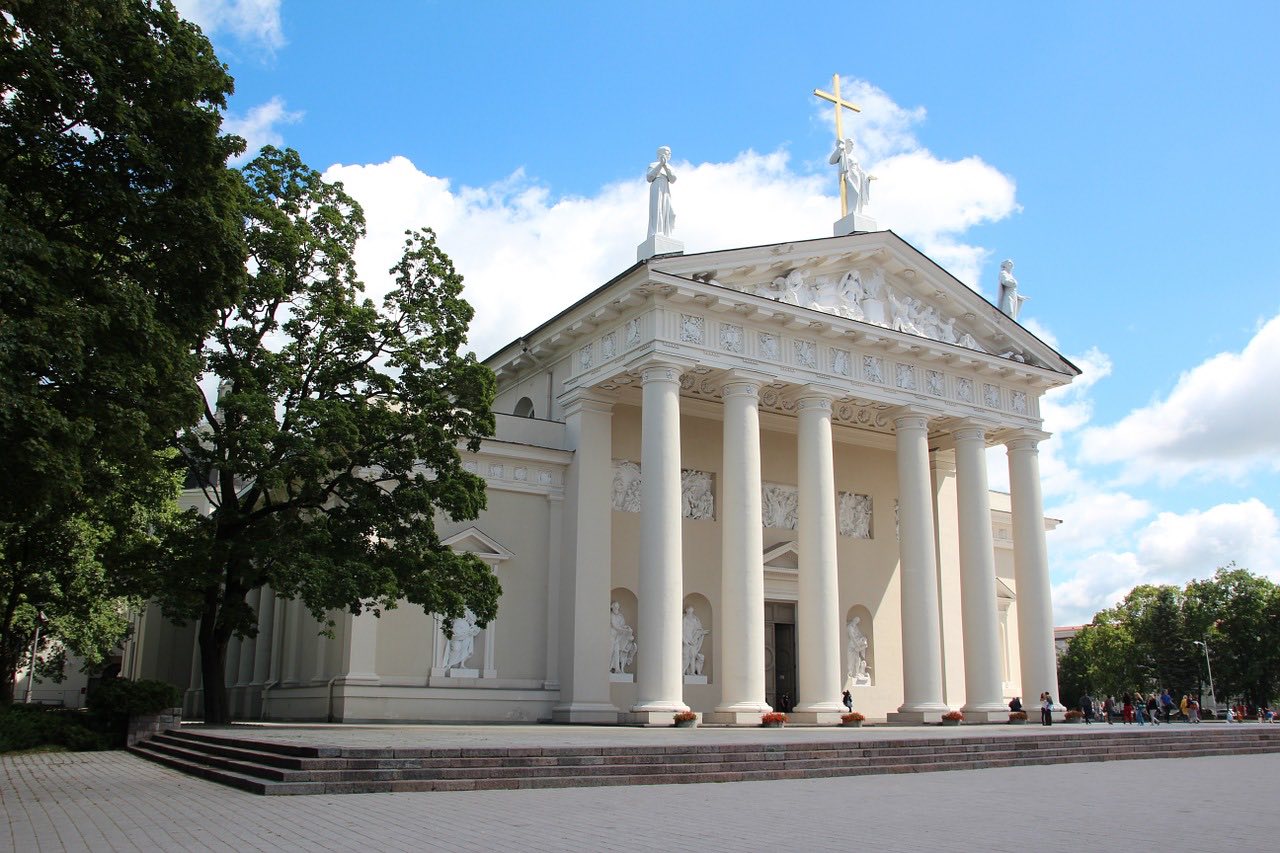 Getting lost among the maze of lanes is a joy in itself, admiring the medieval architecture and perusing the lines of stalls selling local handicrafts. But there are, of course, a handful of highlights that every visitor will want to tick off their to-see list: majestic Cathedral Square, home to the city’s main church and the pretty (if somewhat stumpy) belltower; the gilded Gates of Dawn, the last surviving of the city’s historic gates and an important Christian pilgrimage site thanks to its landmark statue of the Virgin Mary without baby Jesus; and the impressive redbrick complex of the Church of St Anne, a true Gothic masterpiece that, so the story goes, Napoleon thought was so beautiful he wanted to take it back to Paris “in the palm of his hand”. 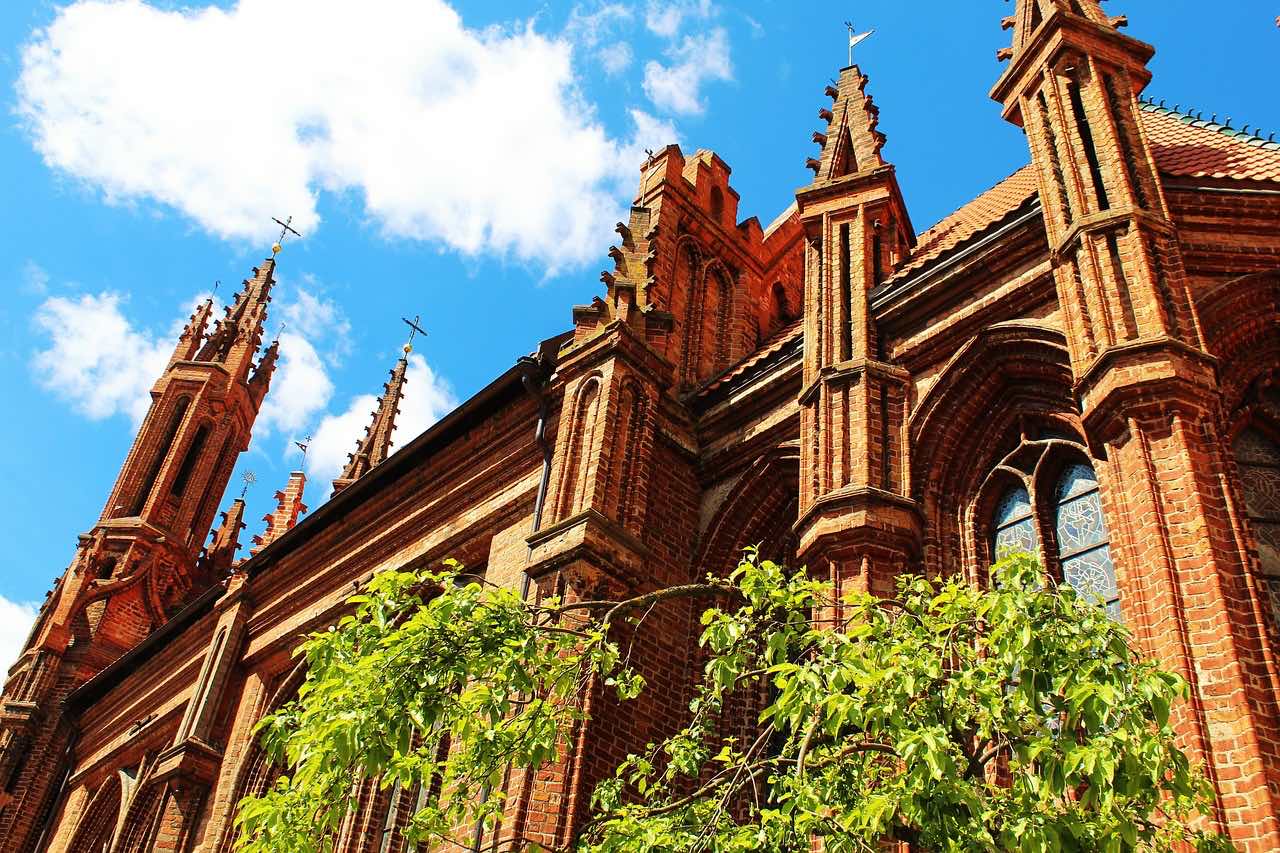 The Hill of Three Crosses – check out the view

Situated in Kalnu Park three white crosses stand tall towering over Vilnius Christ the Redeemer-style. Legend has it that the crosses date back to the 17th century, when three monks placed them here to pay tribute to three fellow monks who were killed here three centuries earlier. The ones that stand here today are, in fact, recreated versions – Soviet forces took down the originals in the 1950s, but you can still see them just below, lying in a crumbled jumble beneath the shiny new crosses. It’s a trek up to the top of the hill (we lost count of the number of steps), but worth it. 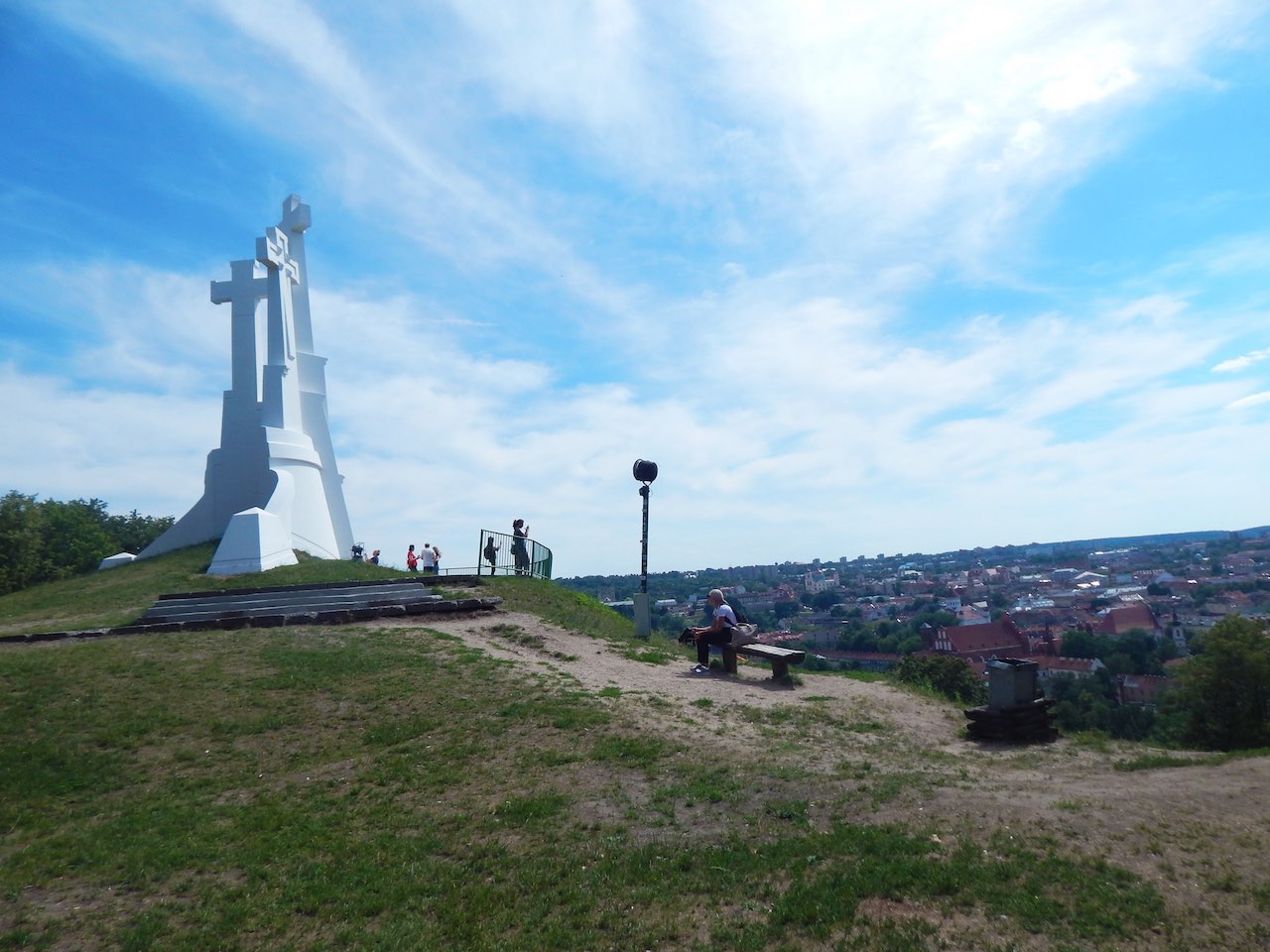 Although views are incredible at any time of day, we’d recommend coming here at sunset to watch night fall over the city’s pastel-pink rooftops.

This is undoubtedly one of the more sobering sights in the city, but a must-visit for anyone with an interest in Soviet history. Once the headquarters of the Gestapo and later the KGB, this insightful museum illustrates the horrors and turmoil experienced by Lithuanians in the 20th century. The first and second floors set the scene, with informative displays and videos telling the stories of the thousands of men, women and children who were captured, tortured and executed during the First and Second world wars and the consequential Soviet regime.

In the basement, visitors can go inside the crumbling prison cells where these monstrosities took place, left untouched since the last KGB officers left in 1991. It’s a chilling experience standing inside the harrowing execution chamber or peeking your head inside one of the whitewashed padded rooms, but one that is key to understanding the country’s recent history. 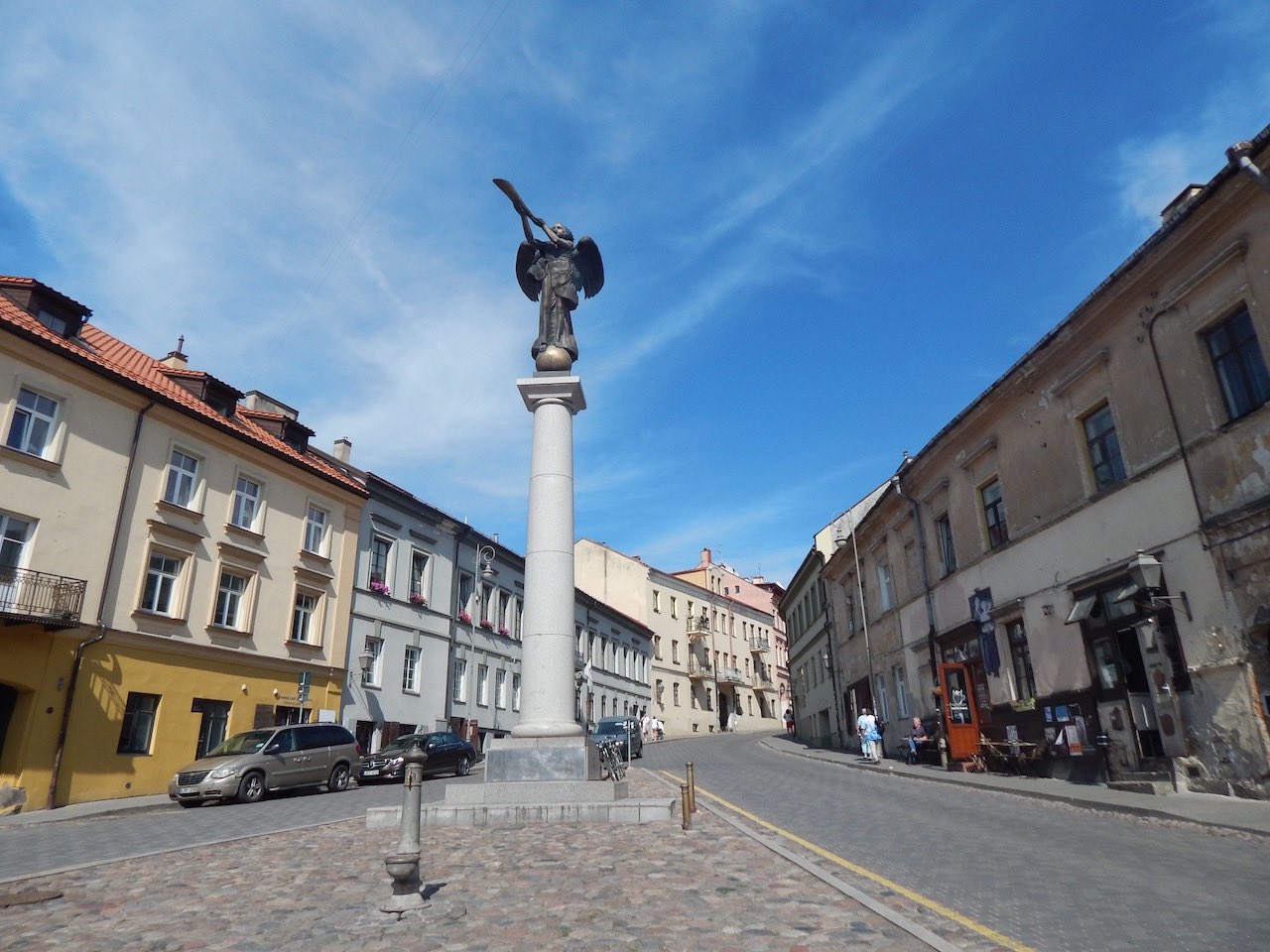 The city’s bohemian district is more than just an arty quarter; it’s a full-blown, self-proclaimed republic. One of Vilnius’s oldest quarters, Užupis officially broke away from the rest of the city in 1997. The district has its own president, foreign minister anthem and even its own constitution, which you can read on the wall of Užupio kavinė (note that while the president loves dogs, the foreign minister is an assured cat lover).

Wander the narrow cobbled lanes to find plenty of independent boutiques, hipster café bars and craft beer joins, as well as garish street art on almost every corner. Keep your eyes peeled for Vilnius’s only mermaid and the Užupis Angel – the crowning beacon of this tiny republic. 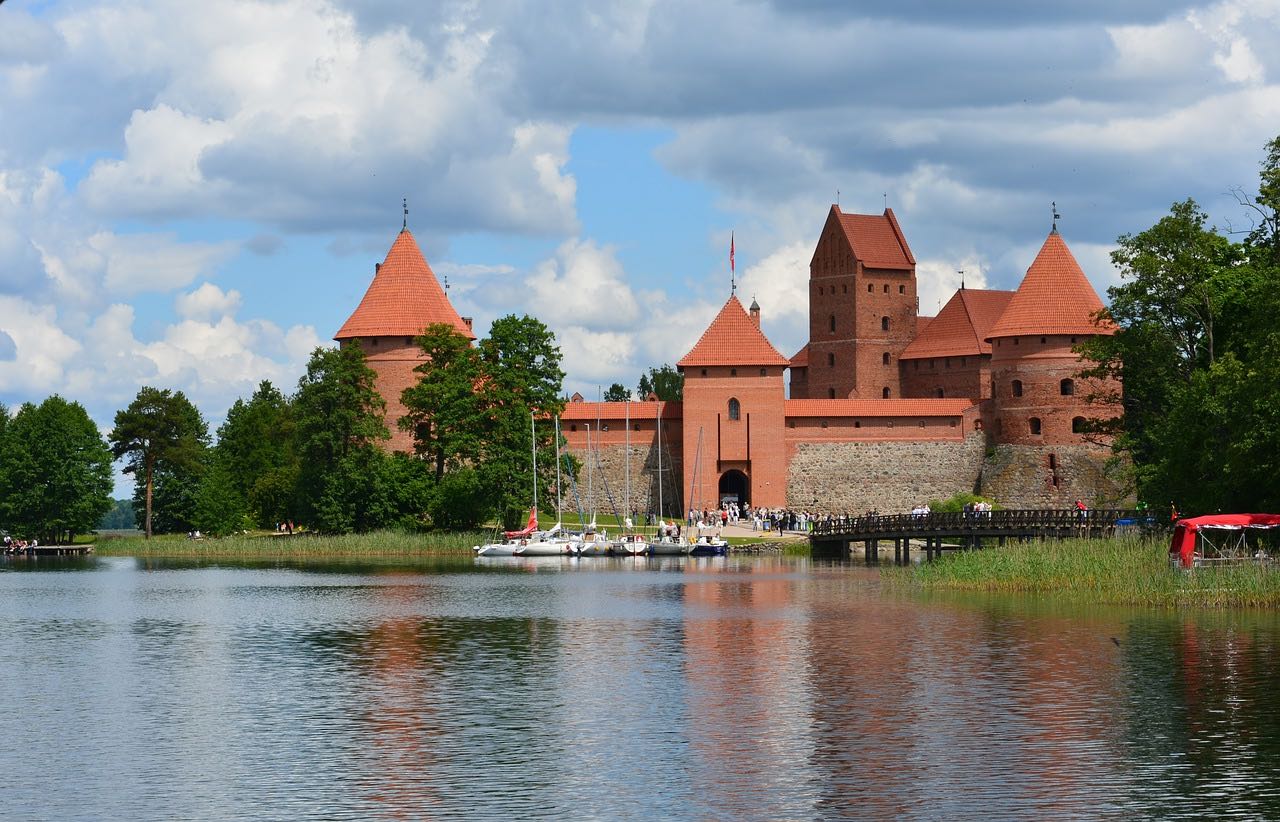 If you have time for only one excursion during your time in Vilnius, make it to Trakai. This historic town, situated just 25km west of the city, is the epitome of picturesque, with its handsome wooden houses, stunning lakeside setting and epic castle. Inhabited since the 14th century, Trakai is home to the country’s largest population of Karaite Jews, and this is the best place to try a kybyn – a traditional pastry not dissimilar to a Cornish pasty, stuffed with cabbage, chicken or mince.

The most enjoyable way to explore the area is by kayak (best booked on a guided excursion with North North East) – you can easily while away a morning or afternoon on the water, traversing from turquoise lake to turquoise lake, and admiring the impressive structures of Trakai Castle and Užutrapis Manor. 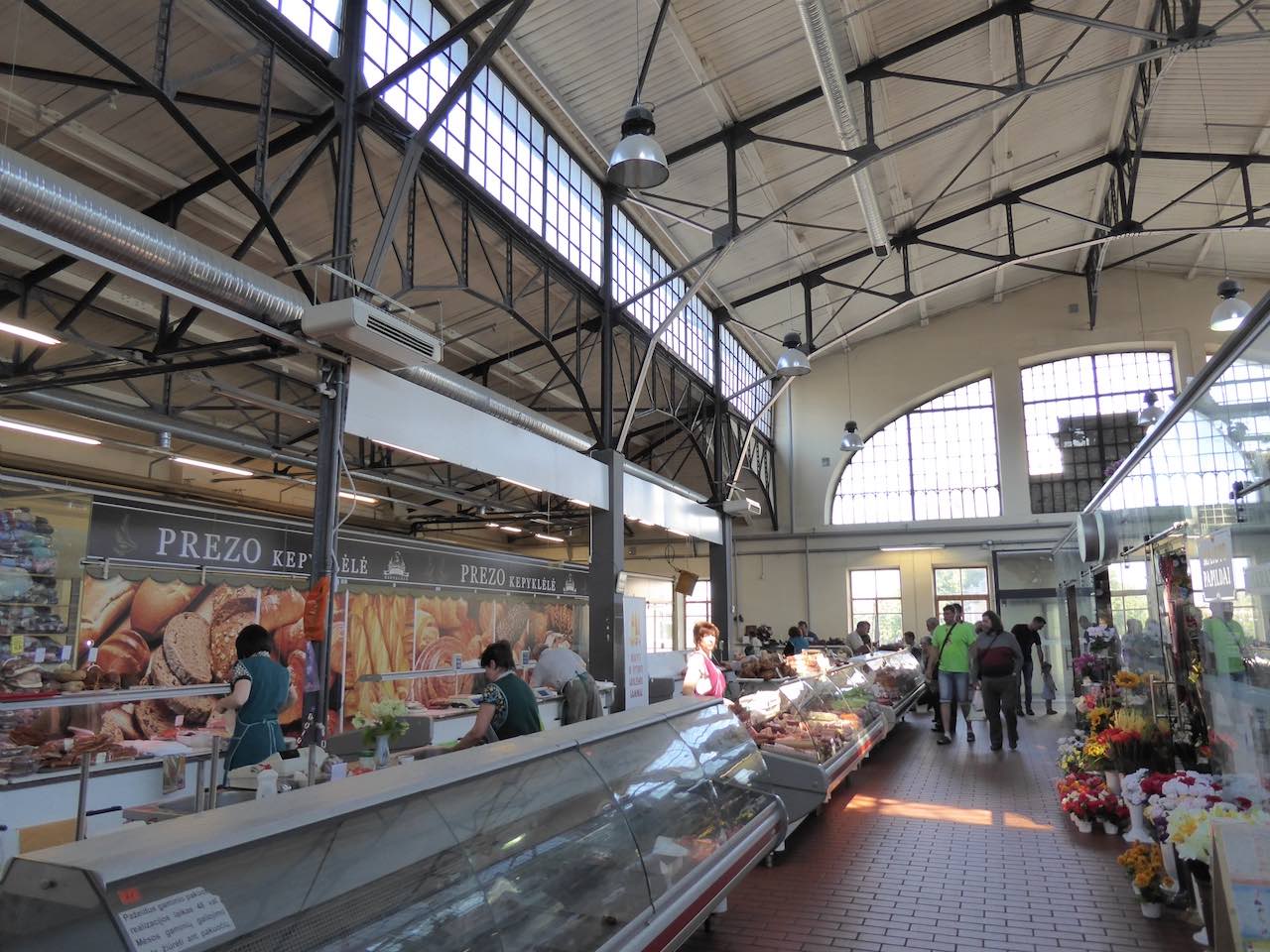 Dating from the 15th century, this covered market is the place to go to find fresh Lithuanian ingredients and sample some of the country’s classic specialities. Wander through the glass-covered hall and you’ll no doubt spot dozens of jars overflowing with lingonberries, row-up-row of drying meats, giant wheels of yellow cheese and carrots and aubergines as long as your arm. There are also a handful of health-food shops housed inside, selling everything from hemp tea to fresh fruit smoothies. Be sure to try a piece of ominous-looking tree cake, or pop into one of the neighbouring bakeries and stock up on cheap but tasty spurgos (curd doughnuts).

If you eat at only one high-end restaurant in Vilnius, make it Amandus. In the last few years, the gastronomic scene in the city has mushroomed (pardon the pun), with the opening of dozens of creative fine-dining restaurants. Lithuanian cuisine is traditionally very hearty, with plenty of red meat and root vegetables, and the team at Amandus champion these rustic ingredients by using them in more imaginative and exciting ways. Although the décor pays little attention to detail, the food is quite the opposite.

Each course is prepared and explained in full by Danish husband-and-wife chefs, Knud and Lizzie Amandus. “The ethos of our restaurant”, Knud explained to us while serving us our Oreo biscuit starter, “is to take something you know, or at least, you think you know, and transform it into something completely different”.  And he was totally right – although the dish in front of me looked like a solid chocolate biscuit with a creme filling, it was anything but. As I popped it in my mouth, I discovered that it was actually spongy in texture rather than crunchy, and that the flavours were decidedly savoury – smoked mackerel and goats cheese, to be exact.

Other dishes on the seasonal menu included edamame bean soup, Iberian pork and grass granita, all accompanied by traditional Lithuanian sides like rye bread. Although not suited to everyone’s palates, dinner here is certainly a taste adventure – and one that shouldn’t be missed if you’re interested in experiencing the burgeoning Lithuanian foodie scene.

If you’re in Vilnius on a summer Friday or Saturday, don’t miss the Open Kitchen, set on the banks of the Vilnia River just outside the Republic of Užupis. This open-air street-food market is the only one of its kind in the country, and although it’s fairly new to the city, it has already earned itself a reputation as one of the best weekend hangouts in Vilnius. Many of the capital’s most popular restaurants have pop-ups here, so you’ll have plenty of opportunities to sample Lithuanian specialities like kukuliai (potato dumplings) alongside Belgian waffles, Thai curries and halloumi wraps. Grab yourself a Lithuanian ale, sink into one of the deckchairs and enjoy the laidback vibes until after the sun goes down.