It’s amazing how quickly one can pick up the lingo of an activity. Fifteen minutes out at sea and twenty minutes after clambering into my orange all-in-one weather protector suit that will also serve as a life jacket if I fall overboard, I’m shouting “there’s a blow” along with the best of them.

Okay so I might not be quite ready to be an extra in the remake of Moby Dick but I am having – and I’m sorry but I can’t resist this – a whale of a time. A blow, a soaring exhalation of water and steam – is what marks the great creature’s whereabouts. You scan the horizon til you spot one, you holler and then you go haring off towards it, bumping across the waves in a small swift boat. It has all the thrill of the hunt without any of the cruelty: you come, you see, but they remain unconquered.

I’m whale watching in New Brunswick’s Bay of Fundy where the nutrient-rich Atlantic waters attract more than 15 species from June to November. As a first timer I was more than happy just to see one. In fact we saw three, all finbacks. Sometimes they eluded us, sometimes they granted us the privilege of seeing their 60 ft lengths breach the water and then disappear again into the deeps. They knew we humans were there, said our skipper, but they were indifferent to our presence.

This sense of humankind clinging to the edge of an ocean that is both splendid and scary pervades the coast of New Brunswick, one of the appropriately named Maritime Provinces of Eastern Canada, and accounts for much of its appeal. You can see it in the weather beaten clapperboard houses, in the lighthouses strung along the coast, in the teeming wild life – as well as whales we saw in our two hour expedition porpoises, seals and bald eagles – and in the old fishing traditions. We learned, for instance, in a bit of badinage with the locals reeling in their nets that real fishermen never sit down in their boats – that’s for old men or wimps.

Fundy, in fact, has the world’s highest tides and at Hopewell Rocks, which also has a visitor centre to explain the phenomenon, you can walk on the ocean floor at low tide and gaze up at the extraordinary shapes sculpted over the millennia by the rise and fall of billions of tonnes of water. Six hours later they’ll be covered by up to 48 feet of Atlantic Ocean.

Further along the coastal trail you can stop off at Cape Enrage with its lovely old lighthouse and take in the full panoramic sweep of the bay, a view described by a leading Canadian guide as the best in the country.

New Brunswick is unspoilt and still relatively undiscovered but it would be misleading to suggest it is unsophisticated. Saint John, for example, is part historic city, part modern powerhouse, a bustling port and regular stop-off for the big cruise ships, an industrial centre with a giant papermill and other factories and a supplier of energy to the USA. But it also has a walkable centre with enthusiastic guides who’ll tell you all about its old houses, cemeteries, parks and churches They’ll also proudly insist that Saint must be spelled thus in full and that there’s no ‘s’ on John – they don’t want you confusing them with St. John’s over in Newfoundland.

Further down the coast is the charming resort of St. Andrew’s by the Sea, built around the 1900s as a summer retreat for successful men and their families. So it has their holiday cottages (in reality fine houses with wrap-around verandahs), an attractive main street with interesting galleries and shops, a good golf course and the grand Fairmont Algonquin Hotel presiding over everything from its position above the bay.

Fredricton is the provincial capital, an old riverside garrison town and site of some fine buildings including the Legislative Assembly, Old Government House, the Anglican cathedral with gold dust-flecked windows and streets of houses of every period. Its most famous son Lord Beaverbrook, Daily Express proprietor, chum of Churchill and Britain’s wartime Minister of Aircraft Production, gave it an art gallery, a playhouse and several university buildings.

The city is a great place for festivals – we were there for the jazz and blues one – but there are also country, folk and classical music, literary, film and Scottish festivals. Most are modestly priced and the city with typical Canadian civic pride and social conscience also makes many of its permanent attractions free including open air cinema shows and walking tours.

In all these places you can eat well, particularly if you choose something from the sea: the fresh catch of the day in a roadside diner, maybe, or something grander with lobster and scallops in a smart restaurant.

New Brunswick deserves to be better known by Brits: we have a long standing connection with the area having settled it first in the 17th century and then more expansively in the 18th. It’s relatively near – only a six and a half hour flight away – and by North American standards relatively compact – about 300 miles by 200 – so it’s easy to fit quite a lot into a short time.

You don’t need to stay by the coast of course. Inland there are lakes and mountains (the northern end of the Appalachians), recreated historic settlements like Kings Landing, golf courses, farmers markets and arts and crafts studios and plenty of outdoor activities including wildlife watching and hiking trails. And for those who are feeling romantic the little town of Hartford has the world’s longest covered or kissing bridge. 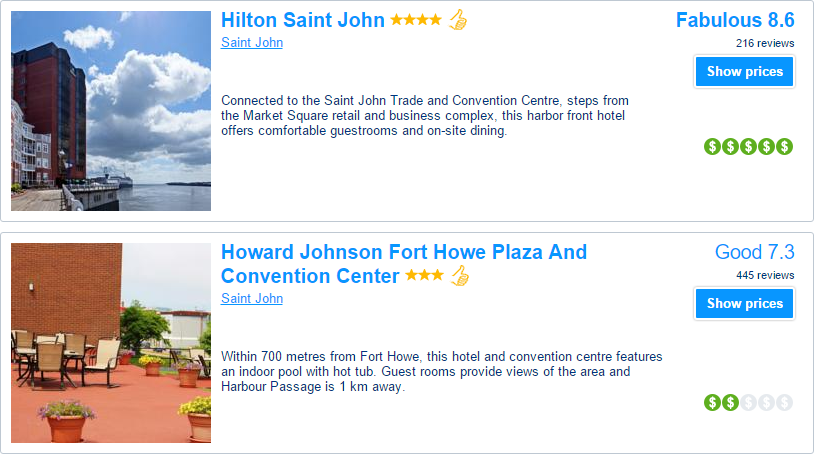 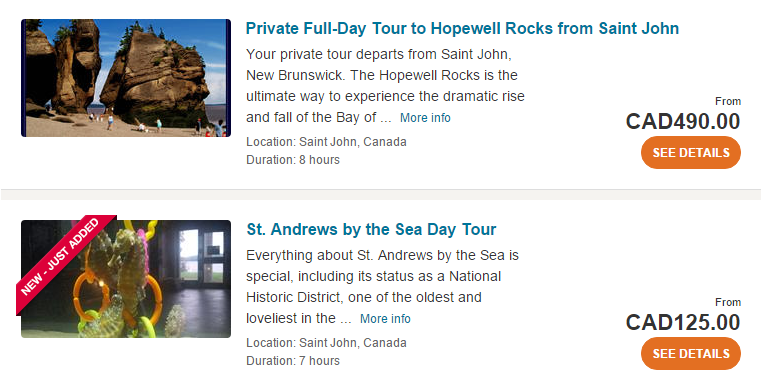