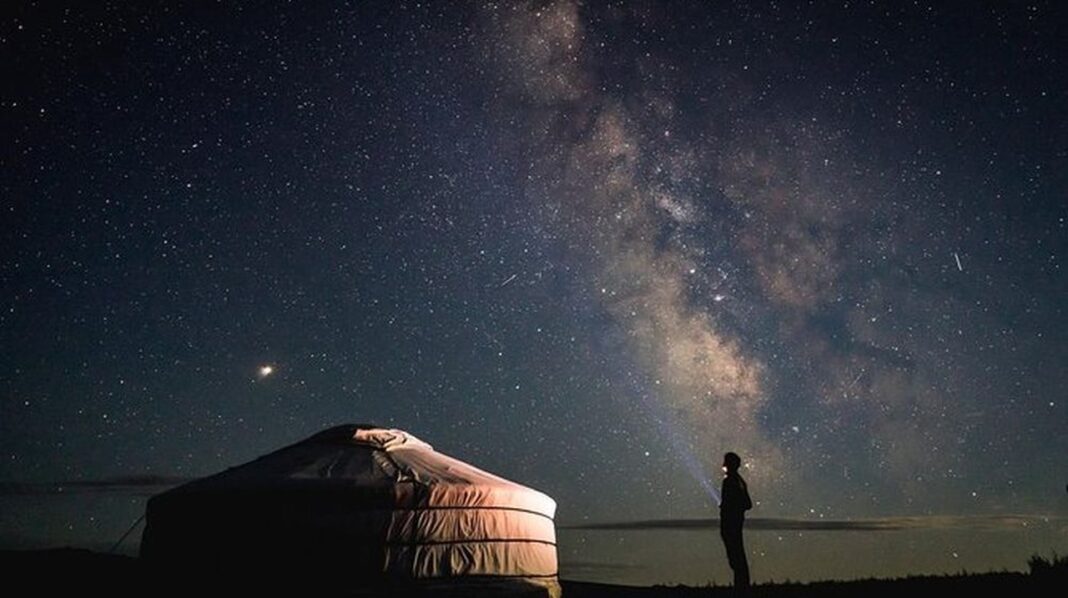 There have been times in the past 12 months when the world has felt pretty small, limited by the four walls of our homes. I’ve longed to be able to see beyond the everyday, to look at something extraordinary, ancient, or far away. And then, on some of the darkest nights, #starentine brought inspiration and light.

This lockdown stargazing event on Twitter encouraged us to survey the limitless possibilities of the universe from our own windows and gardens, reminding us that we are part of something so ginormous we can’t even conceive of its scale.

That, I think, is the appeal of stargazing: it puts our own lives in perspective. When we can travel again, domestically or internationally, astro tourism – stargazing, and any activities related to space and astronomy, including visits to observatories and planetariums – looks set to be one of tourism’s biggest trends.

It is eco friendly, naturally socially distanced, and can be done anywhere in the world, though inevitably it is best in the great outdoors where the light pollution of our towns and cities doesn’t obscure the stars.

I spoke to Megan Eaves, a delegate to the International Dark-Sky Association and creator of #starentine and Dark Sky London (@darkskylondon) about why astro tourism is the perfect travel trend.

Why are dark skies important?

Though it is hard for us to admit, darkness as much as day is an important part of how our world functions. However, since the late 19th century, we have filled our planet with electric light – the United States, Europe, and many parts of Asia are now so lit up that 99 per cent of people cannot see the Milky Way or stars.

Light waste is a huge contributor to carbon emissions and has proven repercussions on human health and the biodiversity that keeps our planet and food chain functioning. The vast amount of light waste emitting from our cities is destroying the rhythms of our world in unimaginable ways.

Why do you think interest in astro tourism is growing?

The concept of astro tourism was already growing before COVID-19, in large part because much of the world’s population lives in urban areas with heavy light pollution and a lack of night-sky visibility.

But the pandemic has seen an even greater interest in the night sky, in part because for many of us who have been stuck at home in confined spaces or with little access to the outdoors, the sky has provided the only limitless sense of space.

Back-garden stargazing proved to be a popular activity at home during lockdowns, and in the short and medium-term especially, as travel recovers, many people will still be looking for socially distanced destinations and experiences, such as astro tourism.

Where can we find the best stargazing in the UK?

What are the top international astro tourism destinations?

Central Asia has some of the planet’s last remaining unpolluted skies – I’d go for a yurt stay in the Kyzylkum Desert in Uzbekistan, or a wild trek in Kyrgyzstan’s Tien Shan Mountains. The southwest USA is also one of the world’s great dark sky regions. Utah, southwestern Colorado, and much of New Mexico have some of the clearest, darkest skies in North America, and dry weather to boot.

I would certainly echo Megan’s recommendation for stargazing in Central Asia. The combination of dry climates and remote locations with little human development is particularly well suited to astro tourism.

The Aral Sea region of Karakalpakstan, Uzbekistan’s Zaamin National Park and Gissar State Reserve, and the Wakhan Corridor between Afghanistan and Tajikistan all have the potential to develop astro tourism as part of their sustainable tourism offering. A combination of International Dark Sky Place designation (which affords night sky protection akin to the protection afforded to landscapes and wildlife in national parks) and the growth of community based tourism would bring not only environmental benefits, but economic benefits, too.

One of the best community based astro tourism projects already underway is Astrostays in Ladakh, high in the Indian Himalayas. An imaginative social enterprise, female homestay hosts have been given telescopes and trained as night sky guides. Tourists can hike by day and stargaze by night, and the women who guide them not only earn additional income, but are stimulating an interest in astronomy and astrophysics in their villages.

I will spend what I hope will be the last few months of lockdown looking out from my window at the tiny, often blurry stars above my urban flat.

And at the same time, I’ll be dreaming of a time ahead when I can visit a much darker place and see them in all their dazzling, high definition glory, a million or more pinpricks of light illuminating the night sky from light years away.