Gibraltar has a most unusual status at the moment as it is one of few destinations that have no coronavirus-related restrictions for UK travellers either way. Add to that that several airlines have direct routes, including Wizz Air launching new flights from Luton, British Airways from Heathrow and easyJet from Gatwick and Manchester. So it is worth taking a look at what Gibraltar has to offer.

You might get the wrong idea about Gibraltar when you run across English red-coated soldiers marching down the street to the sounds of a military band. 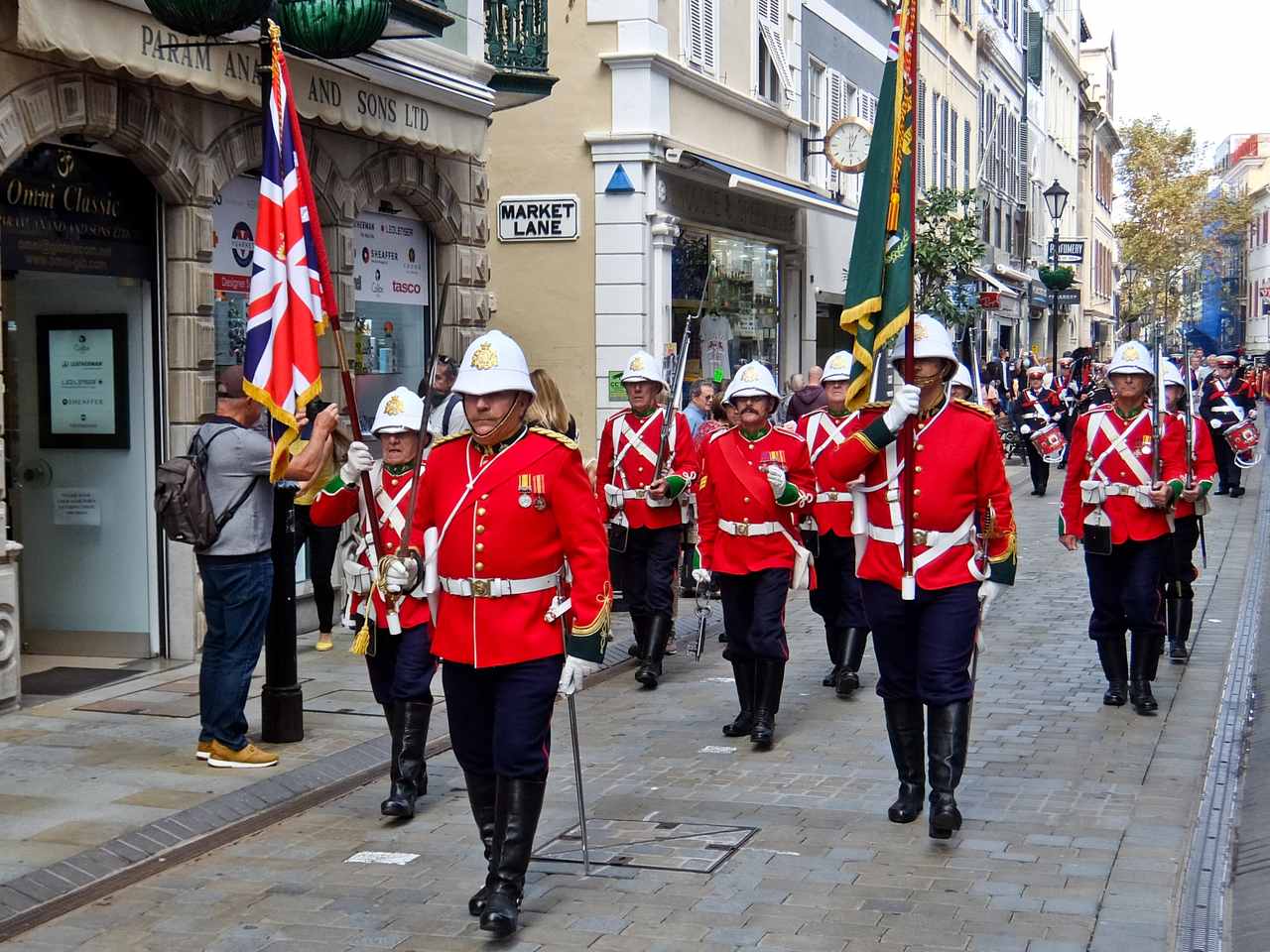 However, this is just a weekly re-enactment, run by keen volunteers, and most of the military are long gone.

Gibraltar is seeing a renewal. New apartment blocks are springing up everywhere, rising on reclaimed land by the sea, and tourism is booming.

And Africa is very close, just across the narrow Straits of Gibraltar, ten miles away. At Europa Point, the Rock makes up one of the Pillars of Hercules with the Jebel Musa Mountain, in Morocco, the other. 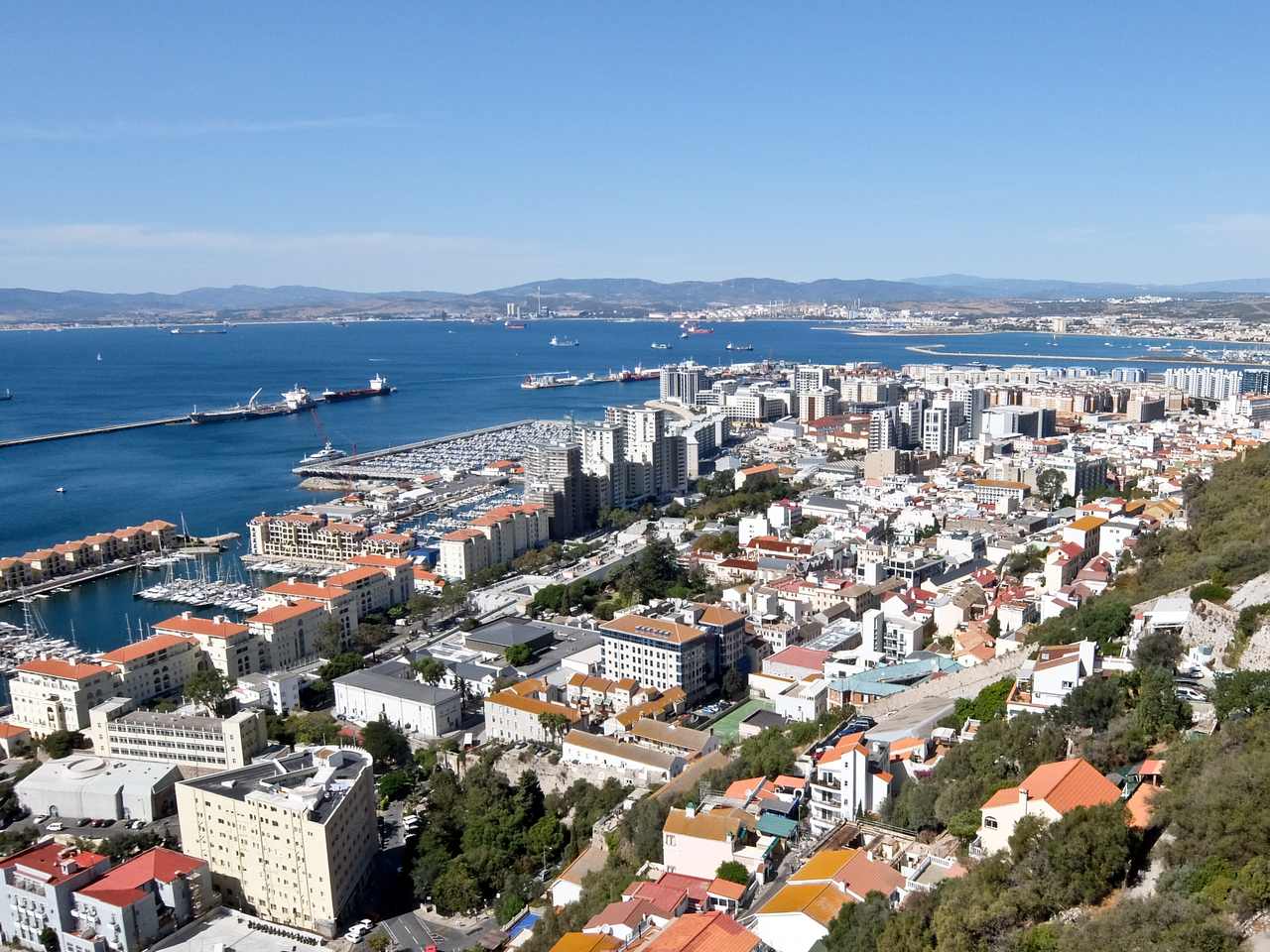 The narrow Straits of Gibraltar

The lighthouse, 49 metres high, with a range of around 37 kilometres, has been guiding sailors safely since 1841. Next to it is the brand new Ibrahim-al-Ibrahim Mosque, a symbol of Gibraltar’s long tradition of tolerance.

Gibraltar was the last refuge for the Neanderthals around 32,000 years ago. They lived in Gorham’s Cave Complex, natural occurring caverns at sea level. The first complete Neanderthal skull was found here in 1848 and a second, that of a child, in 1926.

Archaeologists have found evidence of occupation spanning 120,000 years, and the cave complex now has UNESCO World Heritage status. Although excavations are still ongoing, it’s possible to visit on a guided tour. You must reserve your place in advance.

Barbary Macaques in the Upper Rock

The other famous Gibraltar primates are the Barbary Macaques, living wild on the rough limestone cliffs in the Upper Rock.

They’re native to North Africa but were probably brought here in the early days of the British garrison. Legend has it that, should they ever disappear, the British will have to leave Gibraltar. Numbers diminished sharply during WW2, but Winston Churchill intervened, and additional animals were imported from Morocco.

These days the entire top of the rock is a nature reserve, home to around 250 animals, and easily accessible by cable car. The Macaques flock around tourists looking for food and generally seem a bit of a nuisance.  A different perspective is provided by a local primatologist from the agency Monkey Talk. I join a small group at sunset and get to see them in their natural habitat. Monkey etiquette says that if we stand our ground, the animals will ignore us. Surprisingly it seems to work.

Gibraltar has always been a fortress, and its extensive stone defences are everywhere.  What you can’t see are those hidden inside the rock. Natural occurring fissures, like St Michael’s Cave, have always been used for military purposes.

It’s crammed with stalactites and stalagmites and these days has been turned into a marvellous 600 seat concert hall. Below is another cave, only discovered in 1942, and containing a lake of crystal clear water, nearly 40m long.

But it’s the man-made tunnels that impress – the Great Siege Tunnels. These date from 1782 and were dug so that large cannons could be moved into position, high on the precipitous North face.

During WWII, the garrison needed protection from air attacks, so mining began afresh. Specialised units from the Royal Engineers and the Canadian army worked night and day to create an underground city. 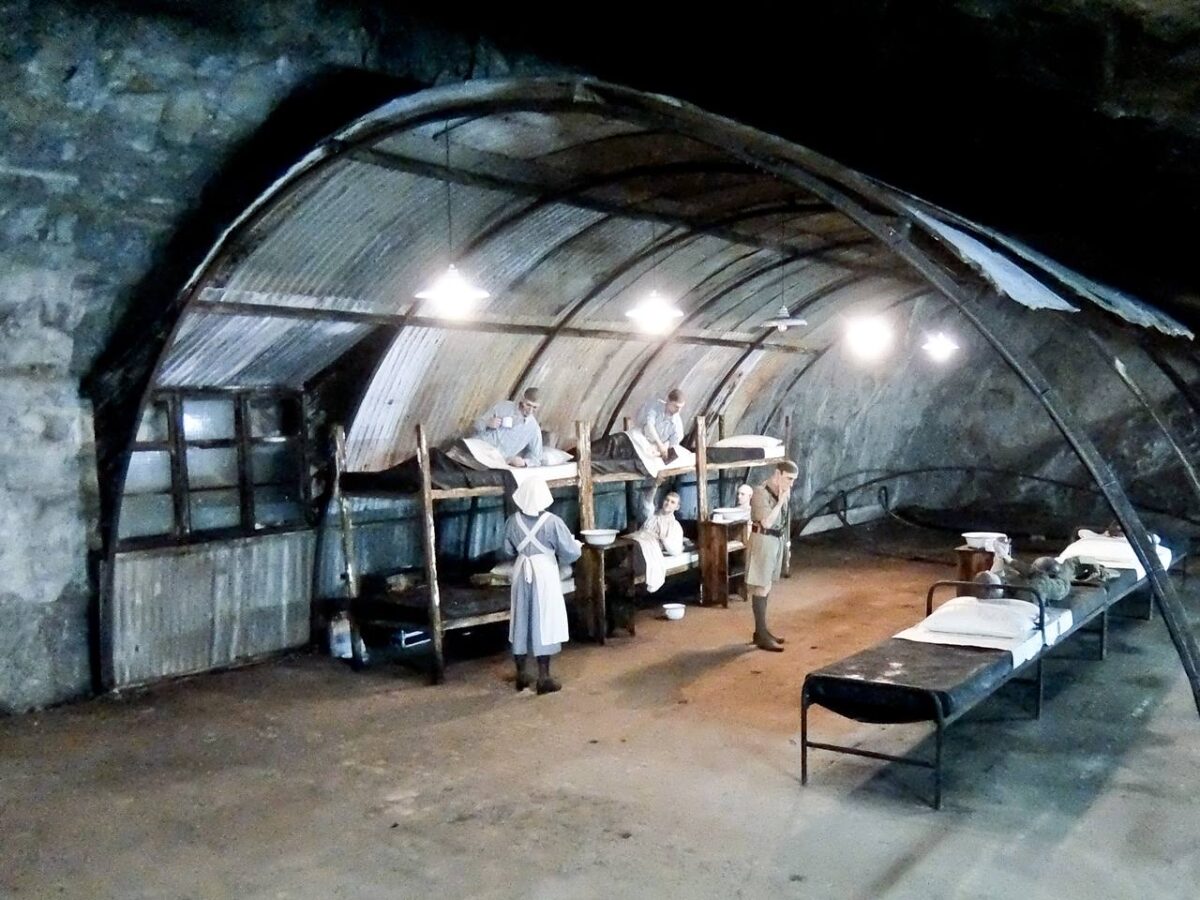 It was designed to house the entire 16,000 garrisons and to store enough food to last for 16 months. Inside was an underground telephone exchange, a generating station, a water distillation plant, a hospital, bakery, ammunition magazines and a vehicle maintenance workshop. The total length of the tunnel network inside the Rock is approximately 52 kilometres.

The expected attack from Hitler didn’t materialise, partly because Franco refused to allow German troops on Spanish soil, so the tunnels were never needed.

Short tours take you inside, giving you a glimpse of the scale of the project. Mock-ups of a field hospital and kitchen, as well as atmospheric black and white photographs, conjure up the spirit of WW2. Ironically many of the tunnels are still off-limits, still used by the MOD for military exercises. 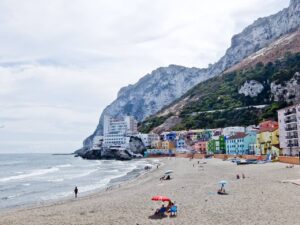 Of course, the reason most tourists come to Gibraltar is the sun, sand and sea, and there’s usually plenty of that.

However, the Levanter phenomenon – clouds suddenly arrive and hog the top of the rock – can put paid to any chance of a swift tan.

Fortunately, Camp Bay and Little Bay, on the Atlantic side, are usually clear. Both are stony but have swimming pools and a popular bar-restaurant.

The largest stretch of sand is at the Eastern Beach, on the Mediterranean, right next to the airport runway. As you swim, you can watch flights landing and departing with Rock’s majestic north face towering above.

South of here is Catalan Bay, known in Spanish as ‘La Caleta’, once a fishing village with colourful houses lining the horseshoe sweep of the shore. Beyond is Sandy Bay, enlarged with 50,000 tons of sand imported from Western Sahara.

As Gibraltar is still part of the UK, it’s not subject to the vagaries of quarantine rules imposed by other countries. That means you get peace of mind when you book your holiday in advance. Even better prices are lower than in the UK, and its duty-free status means that drinks are of excellent value. And you’re not just limited to fish and chips – these days, restaurants serve a wide variety of cuisines, although you can still get a good Sunday roast or a spicy Indian curry.

Click here: Everything you need to know for a hassle-free trip to Gibraltar

Rendezvous Chargrill serves meat and fish right next to the sea.

Bistro Point near the lighthouse at Europa Point

The Yard has over 100 types of gin cocktails