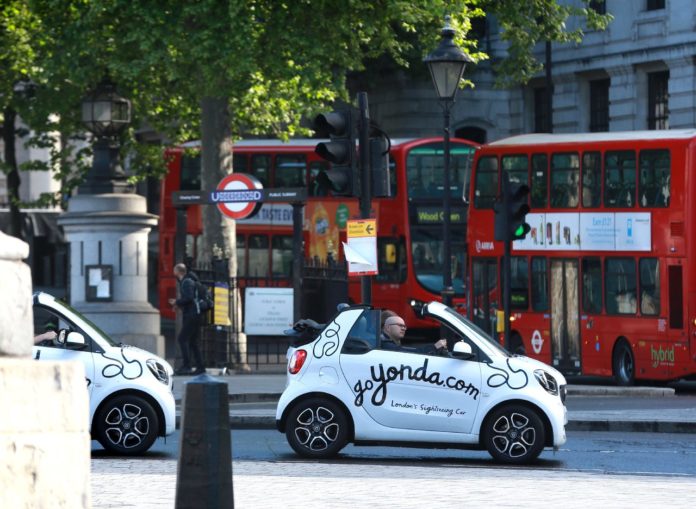 GoYonda say they have come up with a novel way to tour London – a GPS enabled convertible Smart car that guides you through the city’s streets.

Of course, there are plenty of tours around London, bus tours, boat tours, foot tours, self-guided apps, but I had never tried a talking car.

So, I threw away the guide books and tossed the maps away and armed with just the car key, I put the roof down, revved the engine and set off behind the wheel of what turned out to be a very chatty Smart car.

I started in Park Lane and for the next 90 minutes I was guided through Mayfair – which I was told, was once a swamp – Curzon Street, Piccadilly Circus, Trafalgar Square, Soho and Covent Garden. All the famous landmarks were pointed out with lots of commentary – but I also got to hear some juicy nuggets that made me raise an eyebrow.

For instance, the spot where the Queen was born (not where you think) and why the rhyming slang for The Queen is “baked bean”. We passed the luxury hotel where Alexander Litvinenko was assassinated and the menswear shop which helped keep Frank Sinatra’s shirts from coming out of his trousers on stage – bet your eyebrow is raised now.

And as we passed Scotts restaurant in Mayfair I was told that this is where Charles Saatchi was seen grabbing his wife Nigella by the throat last year. As we passed the Freemasons’ Tavern in Covent Garden I learned that this was where the Football Association agreed the official rules for football, in effect giving birth to football as we know it – superb info for my next pub quiz.

And for once I appreciated being in traffic because the car’s technology detected the speed and filled the time with ever more interesting information about the surrounding area. There’s background music too to match the information. So, for instance, as I passed Buckingham Palace, the national anthem played.

The car had lots to say about literature, shopping, fashion, theatre and music with fun facts and stories about significant moments in popular culture.

This was clever stuff and my eyebrow was raised pretty much throughout the 90 minutes. That is pretty cool since I am a born and bred Londoner and thought I knew it all.

Does London need another guided tour?

The traditional sightseeing tour that many people try when they come to London is a really passive experience. Visitors to the city and Londoners alike are crying out for a more active and engaging experience that allows them to take control and create their own memories. That’s why we created Yonda, a more personal, fun and engaging way of discovering London. There is nothing like it anywhere else in the world. Drivers will get a true feel for the city as they drive around and discover some of the amazing facts and stories that we have unearthed.

Just got back from a self drive with the talking car that thinks it's a guide @goYonda pic.twitter.com/4VncfQOvnr

Goyonda.com have a fleet of white two-seater Smart cars. Each car is fitted with its own GPS enabled tablet that acts as a tour guide through the city’s most iconic sights and trendiest areas. And as the car is so small it is nimble enough to navigate London’s side streets that other tours cannot reach.

Yonda cars are all convertible, low emission new model Smart cars. Currently two-seater cars are available, and the fleet will expand later in 2017 with a four-seater family option. The fleet will also switch to electric when the electric model is available in the UK later this year.

Drivers need to be at least 25 years old and have a full driving licence to start roaming with Yonda.

The price of the 90 minute tour is £30 per person based on two people exploring together.

You may also want to read: