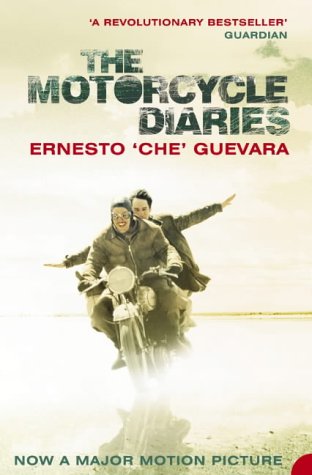 In January 1952, a 23 year-old Che Guevara set out, with his friend Alberto Granado to explore South America on La Poderosa (“The Powerful One”) – a 500cc Norton.

Within a decade the whole world would know his name.

The diaries he wrote en route, and which record their disasters and discoveries, have long been a best seller and were recently the subject of a feature film now out on DVD.

Ernesto “Che” Guevara de la Serna was conscious of the impact this journey was having on him and, once you have finished reading his book, you too will hear Che’s voice encouraging you to travel with an open mind and an understanding heart.

To appreciate the beautiful places waiting to be discovered – but not spoilt; friendly people to meet – but not to judge; different customs to learn from and, probably, something you can do to make our world a little more just.

Che and Alberto set off from Buenos Aires, down the Atlantic coast of Argentina through La Pampa and across the Andes into Chile.

From there the two travelled northward to Peru and Colombia with journey’s end Caracas in Venezuela.

He finds Argentina a diverse country with some of the world’s tallest mountains, widespread deserts and splendid waterfalls. The wild, remote areas in southern Patagonia contrast sharply to the lively metropolis of Buenos Aires.

Che’s own words captures this fascinating country when he writes:

“The road snakes between the low foothills that sound the beginning of the great cordillera on the Andes, then descend steeply until it reaches an unattractive, miserable town, surrounded in sharp contrast by magnificent, densely wooded mountains.

“San Martin lies on the yellow-green slopes that melt into the blue depths of Laguna Lacar…’ or in his narration of their way to Bariloche.

“ We decided to go to Bariloche by the Seven Lakes road, named for the number of lakes the road skirts before reaching the town…passing greatly varying lakes, all surrounded by ancient forest, the scent of wilderness caressing our nostrils.

“But curiously, the sight of a lake and a forest and a simple solitary house with well-tended garden soon begins to grate.

“Seeing the landscape at this superficial level only captures its boring uniformity, not allowing you to immerse yourself in the spirit of the place; for that you must stop at least several days.”

The first frontier they cross takes Che and Alberto into Chile and a route that takes them from Peulla, through Santiago de Chile and Valparaiso to Arica.

Chile is a country of extraordinary contrasts and supreme beauty, with landscapes varying from the massive and impassable wall of the Andes to the ancient forests of the Lake District.

Along its length the country is marked by a narrow depression between the mountains and the sea.

To the north the land becomes more arid, until one reaches the forbidding Atacama Desert, one of the most inhospitable territory on earth.

To the south the land falls away, and the region between mountains and ocean fades into the mystifying islands that ends in Chilean Patagonia.

“The long kilometres stretching between Iquique and Arica climb and descend the whole way.

“We were carried from arid tablelands to valleys with only slight trickles of water running through them, barely sufficient for a few small, stunted tees to grow at their edges. These utterly desolate pampas emit a sultry heat during the day, though as with all desert climates it is considerably cooler by night”.

Travelling on into Peru the two men, they stayed in more than twenty villages from Tacna to the Amazon and it is at this time that we begin to see a change in Che as he writes:

“The person who wrote these notes passed away the moment his feet touched Argentina soil. The person who recognises and polished them, me, is no longer. At least I am not the person I once was. All this wondering around “Our America with a capital A” has changed me more that I thought”.

Peru is best known as the heart of the Inca Empire, but it was home to many diverse indigenous cultures long before the Incas arrived.

While in Peru Che writes:

“The word that most perfectly describes the city of Cuzco is evocative.

“Intangible dust of another era settles on its streets, rising like the disturbed sediment of a muddy lake when you touch its bottom. But there are two or three Cuzcos, or it is better to say, two or three ways the city can be summoned”.

Colombia was their next destination as they travelled to Venezuela taking in Leticia and Bogotá to Cúcuta.

Colombia is a country of great natural resources, and has a mixed culture reflecting the influence of the indigenous Indian, Spanish and African origins of its people.

While in Colombia, Che seems too busy coaching a football team to appreciate the beauty of this country to the fullest, but he sensed the repression of individual freedom more than in any country on the journey.

Finally Che and Alberto crossed the border into Venezuela where they rode from San Cristobal to Caracas.

“I am sure Christopher Columbus, the first European to visit Venezuela, would agree with me that this country is simply unique. Anyone who has ever seen a tepuis rising above Venezuela’s Gran Sabana can testify that there’s nothing really like it, anywhere. Venezuela is as much a Caribbean country as it is a South American one”, wrote Che.

“I find myself drifting away from the centre of Caracas. The homes in the suburbs are spaced much further apart.

“Caracas extends along the length of a narrow valley, enclosing and restraining it on its edges, so that on a short walk you will be climbing the surrounding hills, and there, with the progressive city laid out before your feet, you will begin to see a new aspect of its multifaceted makeup.”

Reading Che’s memories made me realise travelling changes us more than we think. It helps make us better people and more tolerant of others.