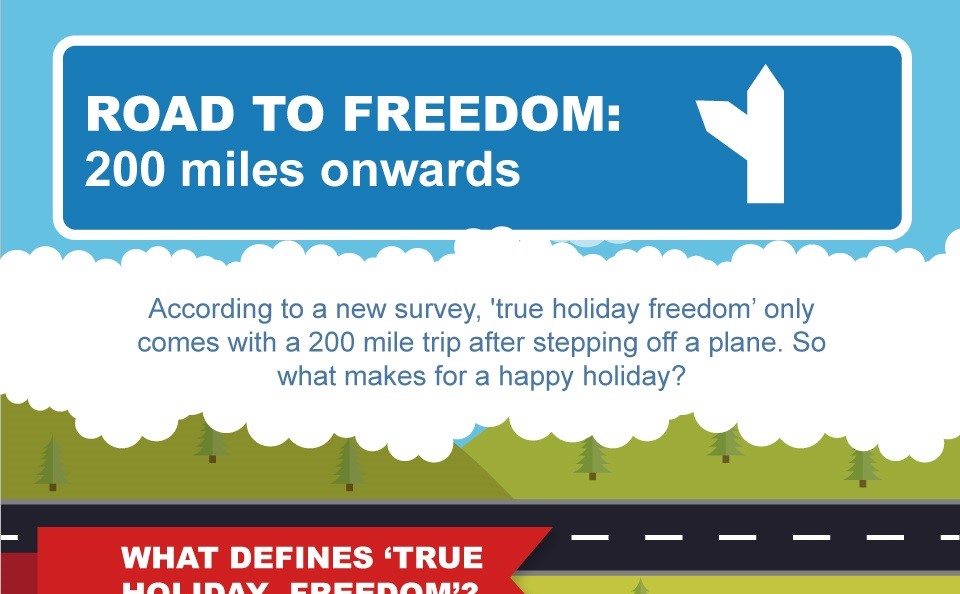 While many people already go on holiday to seek freedom from their everyday lives, travelling up to 200 miles after landing at an airport is when the holiday really begins and when British holidaymakers truly feel ‘care free’, according to new research released by car hire broking company, Auto Europe.

The research reveals that sunshine and beaches are no longer enough, with more than half (63%) willing to travel up to 200 miles more in seek of rest and relaxation and to forget about their everyday lives back home.

A further one in 10 (13%) intend to go as far as 250 miles after stepping off the plane to ensure even more value for money from their holiday.

33% seek their own space away from other tourists

Despite the majority (70%) looking forward to taking in the beautiful scenery of the country they plan on visiting and 41% salivating over at the thought of the cuisine on offer, more than a third (39%) can’t wait to get off the beaten track and discover their destination’s hidden gems while 33% seek their own space away from other tourists.

A further 35% are excited about getting to experience the local culture compared to just 25% stipulating the Sun as important.

More than a quarter (28%) said that their upcoming getaway was a chance to meet attractive and interesting locals, which is considered more important than history or architecture (26%) the destination has to offer.

The Road-trip Abroad: The Key to Escapism

More than half (56%) will book a hire car to cover the miles with 49% choosing to jump in the car on a break because of the unparalleled freedom it offers.

Unsurprisingly, 42% explained that it allows them to see more of the country they are in compared to a packaged holiday.

A fifth (22%) like to get in the driving seat while away as it allows them to see new sights and experiences that could lead them to find a new meaning or direction in life.

According to 45% of respondents, it starts with scenic roads and lush greenery, before passing through coastal towns and villages (39%) in a luxury car – nothing like the one they have at home (36%) and surrounded by mountain views (32%).

For 17% of respondents, adventurous terrain was a factor in the quintessential road trip, while getting lost added to the excitement for 16% and one in 10 (11%) just couldn’t wait to feel the wind in their hair when it comes to holidaying abroad.

Almost a quarter (23%) believe that a driving holiday around the Amalfi Coast in Italy is best place to cover such miles when it comes to rest and relations, while 20% say La Route des Grandes Alpes in France is their dream driving route.

A road trip from Barcelona to Malaga in Spain was the third most popular route, mentioned by 18%, followed by an east to south coast drive in the same country (16%), which came in just ahead of the Ring of Kerry in Ireland (15%).

Some 30% of the sample said having a partner or spouse alongside them to share the experience would top the trip off nicely.

When asked why they didn’t want to get on the open road with this person, almost one-fifth (38%) said if they spend too much time with them they become annoying, while 25% believe they would end up butting heads as they like different types of holidays. More than one in ten (11%) claimed that a road trip with this person would end up being filled with arguments.

Auto Europe also asked respondents what the soundtrack to their ideal road trip abroad would be and the most popular song, cited by more than one-third (34%), was Good Vibrations by the Beach Boys, indicating that this 49-year-old track is still a feel-good anthem.

However, Pharrell Williams’ mega-hit Happy is the song that the family is most likely to agree upon (24%) when it comes to keeping everyone in the car happy during a road trip.

Our research proves that car hire is integral to a holiday.

Despite the obvious benefits that come with hiring a car, such as the unparalleled freedom it might offer on holiday, what’s interesting is that our findings show some people need to drive on an open road abroad to feel completely relaxed and carefree before enjoying their well-earned break from their everyday lives.

Fortunately, British holidaymakers don’t have to look far as the miles they would usually cover on holiday for the best worldwide deals on car hire as we offer affordable rentals at low prices online.

Disclaimer: this article has been sponsored by Auto Europe

History of art in New York (and where...

Family trip from the UK to France: ferry...