Sitting in El Floridita bar in Havana‘s Old Town, perhaps on the very seat American novellist Ernest Hemingway was once perched, sipping the very cocktail – a Daiquiri – he loved to sip, I was aghast at just how many of these sweet tipples the bar tender knocked out every 15 minutes. He adeptly filled eight cocktail glasses at a time for a clamouring clientele. Continuously. All night long. 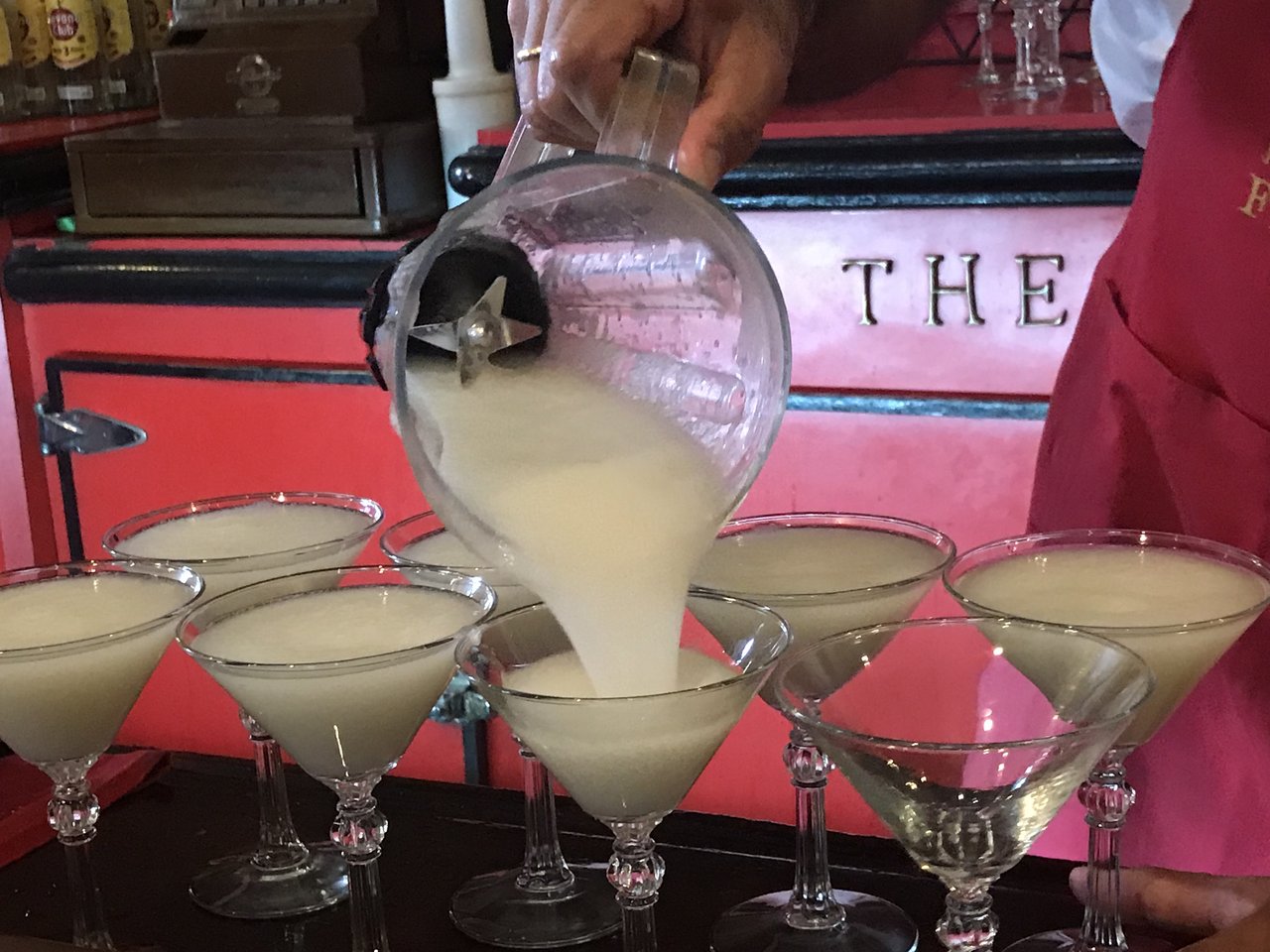 It is of course a wonderful experience, but in that moment I was glad I was in Havana at this time. The city is busy now but I’ll bet (but not in Cuba as there are no casinos) that within 10 years the crowds will have swelled, the streets will be filled with guided groups and the joy of discovery will be elusive. And indeed enjoying an evening at El Floridita will be nigh on impossible – unless you are a sardine.

So, if you don’t want to miss the gorgeously ramshackled 16th century buildings that sit alongside posh architecture or the iconic, colourful American classics (Cadillacs, Chevys, Dodges, Buicks, Fords) which may disappear due to lack of parts, get there now. I can report that Japanese Kias and Hyundai cars are already far too prolific on Havana’s roads and though perfectly functional they are not nearly as much fun.

Start at Parque Central which leads to the old town – Havana Vieja. Prepare to be dazzled by the neoclassical Capitol on Prado street – the former seat of the Cuban Congress and once home to the Cuban Academy of Sciences. After 8 years of restoration this impressive building has reopened as the home of Cuba’s national assembly. Use this building as a landmark and a point of orientation as it faces east and everything in front of it is Old Havana. 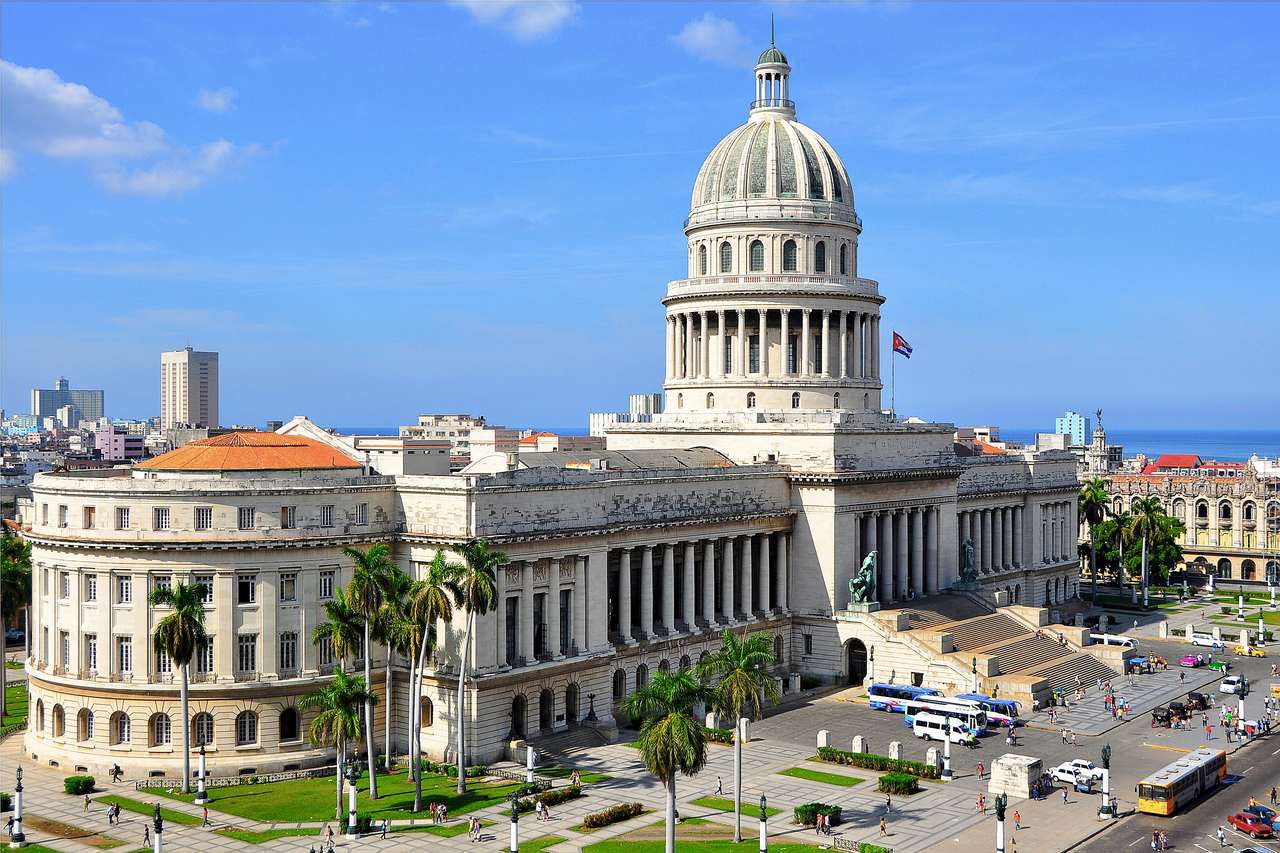 Near to it is the Gran Teatro de la Habana Alicia Alonso, named after Cuba’s most famous prima ballerina, probably the most beautiful building in town. Take a moment to gaze at the sculptures, the marble and bronze works. The four groups of sculptures in white marble in the front are by Giuseppe Moretti and represent charity, education, music and theatre.

Walk into Parque Central, a shady, leafy and palm filled square and see the statue of Jose Marti, a Cuban poet and journalist. He masterminded the revolution but was not a military man and died in combat. 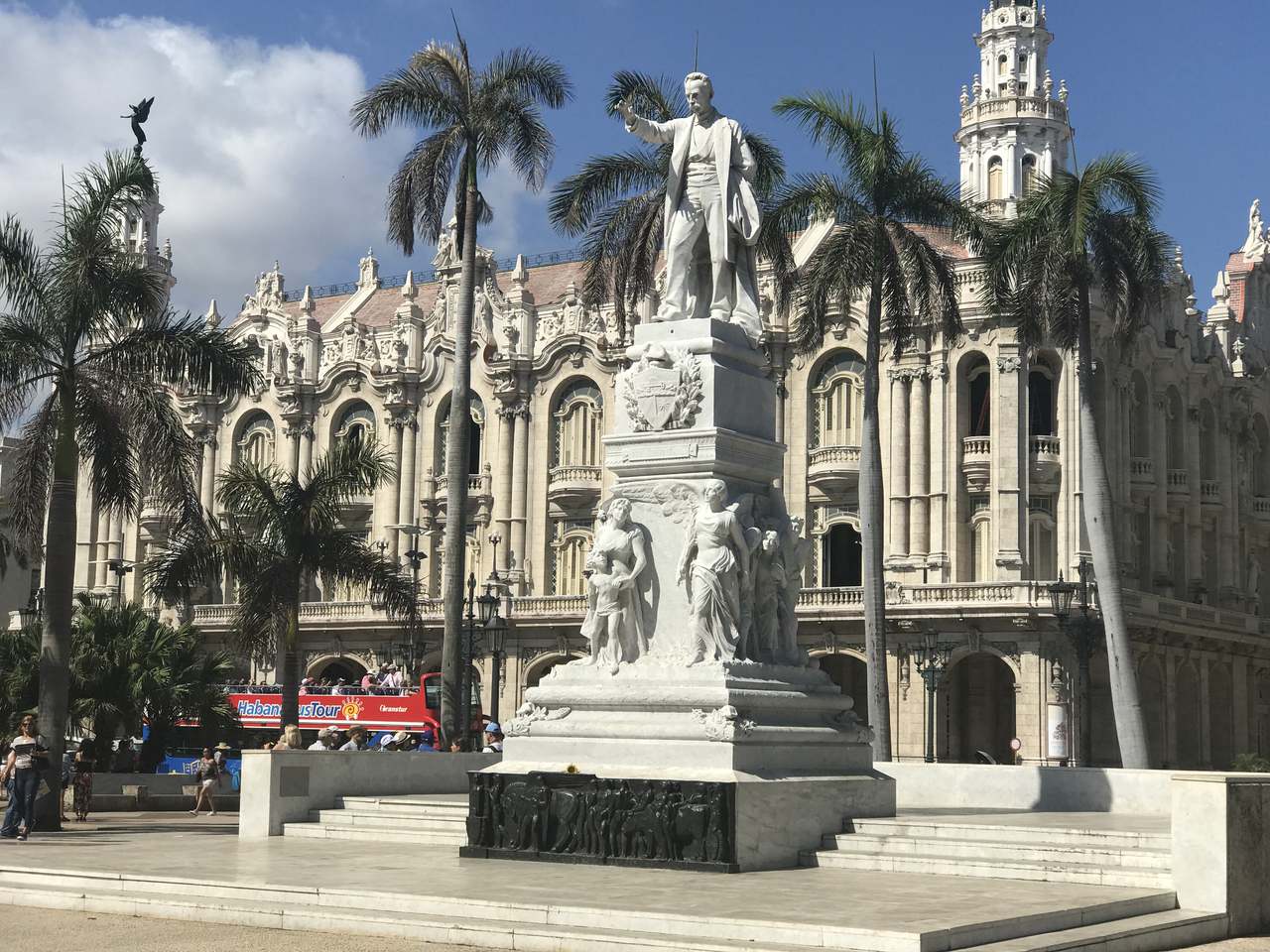 Jose Marti, a poet not a fighter

Opposite is the Museo Nacional de Bellas Artes – Arte Cubano which some say is the finest art gallery in the Caribbean. Look out for works by Guillermo Collazo, a Cuban great; Rafael Blanco, Raúl Martínez of 1960s Cuban pop art fame and Wifredo Lam whose work can easily be compared to that of Picasso.

In two minutes get to Calle Obispo, a long narrow road hemmed by tall buildings and quirky shops such as an apothecary museum where you can buy headache pills and an intriguing al fresco art and craft market.

Along with Calle Mercaderes it is one of the most popular shopping streets and the two streets converge at Hotel Ambos Mundos where Ernest Hemingway had a room – which you can visit. If you are ready for a rest, make your way up to the hotel’s rooftop bar for a beer or two and a pretty good view over the harbour.

Passing the fantastic Palacio de los Capitanes Generales, former residence of the governors of Havana but now home museum of the City of Havana you get to Plaza Armas. This is the oldest square in the city and is a lovely leafy square with palm trees around which has the statue of Carlos Manuel de Céspedes, who played a major roll in Cuba’s independence in 1868. Around it is the Archeology Museum, Castillo de la Real Fortaleza, a 16th century fort and El Templete which is monument to Christopher Columbus for founding the city.

Walk a little further to Havana Bay where the cruise ships come in. Make your way there and pick up a taxi to Plaza de la Revolución. It is one of the biggest squares in the world and is where Pope John Paul II (on a first ever visit by a Pope in 1998) and Pope Francis held large Masses during papal visits.

You can also take an elevator up to the top of the José Martí Memorial, one of the city’s highest points. The National Library and various government ministries are located in and around the Plaza and some are adorned with images of revolutionary figures Che Guevara and his companions.

Must go for a ride

Those classic cars that Havana is famous for are the most fun way of touring the city and getting your bearings. Classed as national moments by the government, they are on full-time tourist duty. Pick one up by the bay, in front or Parque Central, around Revolution Square and near the Capitol building. Either use it as a taxi service or ask for a tour. 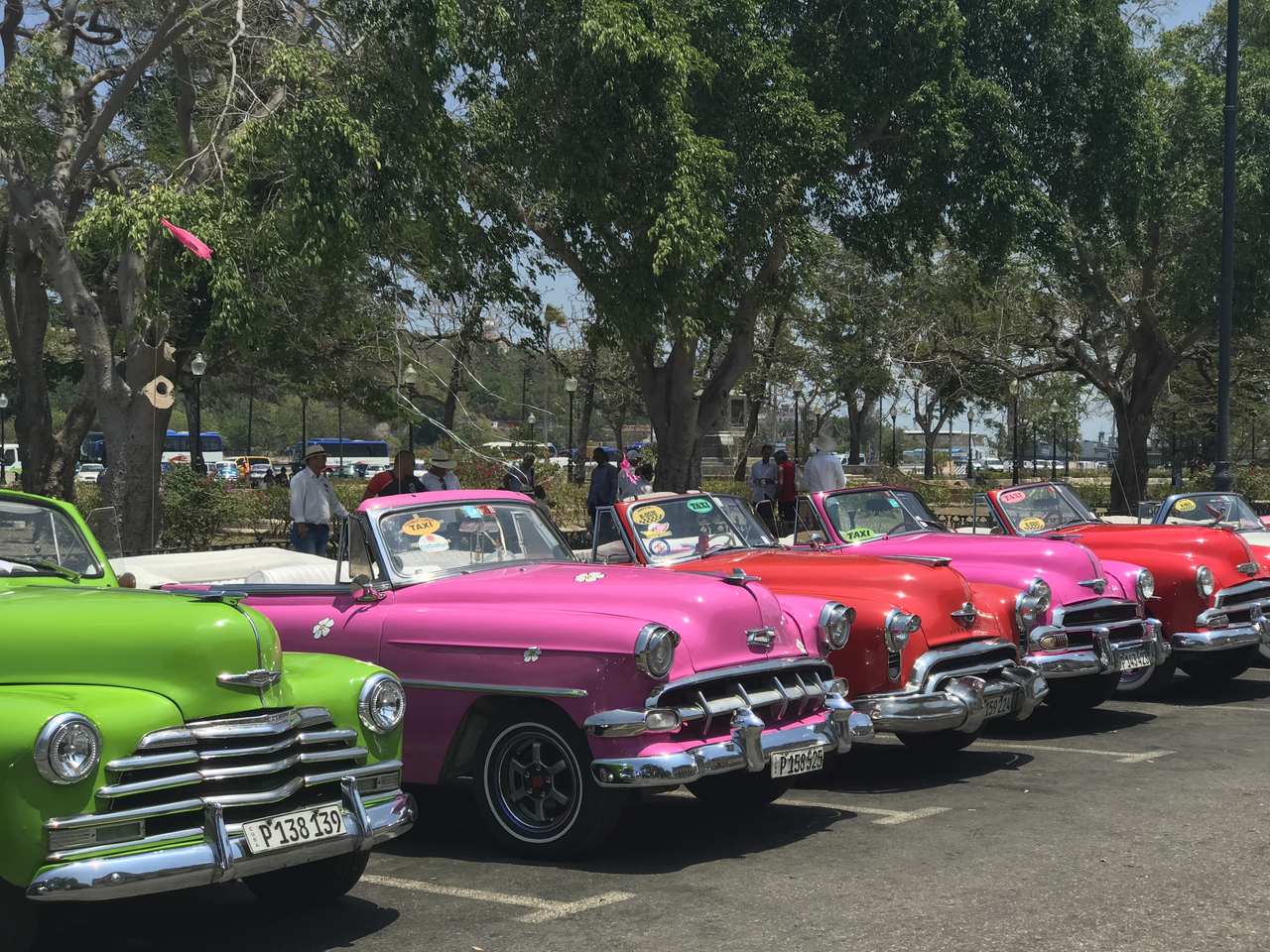 There are a few trendy places to wet your whistle and of course El Floridita made famous by Hemingway is one of them. There’s also Sloppy Joe’s Bar, once the place-to-be for American celebrities in the 1940s and 1950s – and still a popular celebrity haunt. Though not as salubrious as it was in its glory days, sipping a Cuba Libra (rum and coke) here still holds some cachet. And if you do love a mojito, try La Bodeguita on Empedrado Street. Dressed in curious objects and signed photography, they claim to have invented the mojito and say they have been serving it since 1942 – that’s a lot of practice.

Pork, lobster, chicken and fish are the most popular dishes in Havana. Often served with rice mixed with beans. Try these dishes at lunchtime at La Imprenata housed in a former printing works on 208 Mercaderes Street. The food may not be cordon bleu but is highly satisfying. You won’t find the US products such as Coke, so instead try the Ciego Montero Kola which is a tad sweeter but does the trick. In between courses take a walk around to look at the old printing presses and see if you can find the small pond with live turtles.

Must go for a stroll at sunset on El Malecón

The vibe around the seafront promenade, Malecón, is pretty palpable. Many Habaneros hang out along this five-mile (8km) coastal road – officially known as the Avenida de Maceo – and esplanade for no particular reason other than to enjoy the dimming light at sunset. There may be some salsa notes drifting around from somewhere or perhaps just the hum of the waves as they move back and forth.

Must take in the Museum of the Revolution

To get a handle on Cuba’s steadfast resistance to the United States you must visit this museum. Though a tad shabby the insights it provides are piercing. It’s in the old presidential palace and the preserved bullet holes are telling. A myriad of documents tell of Fidel Castro’s triumphant moments from his guerrilla days and his relationship with Che Guavra.

If you want something worthwhile to take home, pick up some rum or cigars. None make these products better than the Cubans.

A great place to stay is the centrally located colonial-styled Parque Central hotel. It has all mod-cons and a great roof terrace with wide ranging views over the city.

Virgin Atlantic flies three times a week from Gatwick to Havana. José Martí airport is 10 miles south-west of the city. The main international arrival point is Terminal 3. Passport control and customs are usually friendly and efficient. Bring a copy of your travel insurance policy, or you’ll need to buy cover on arrival.

Jet Airways to launch non-stop service from Manchester to Mumbai