Arriving Southampton April 27, 2022, for a Western Europe maiden voyage than a series of Mediterranean sailings 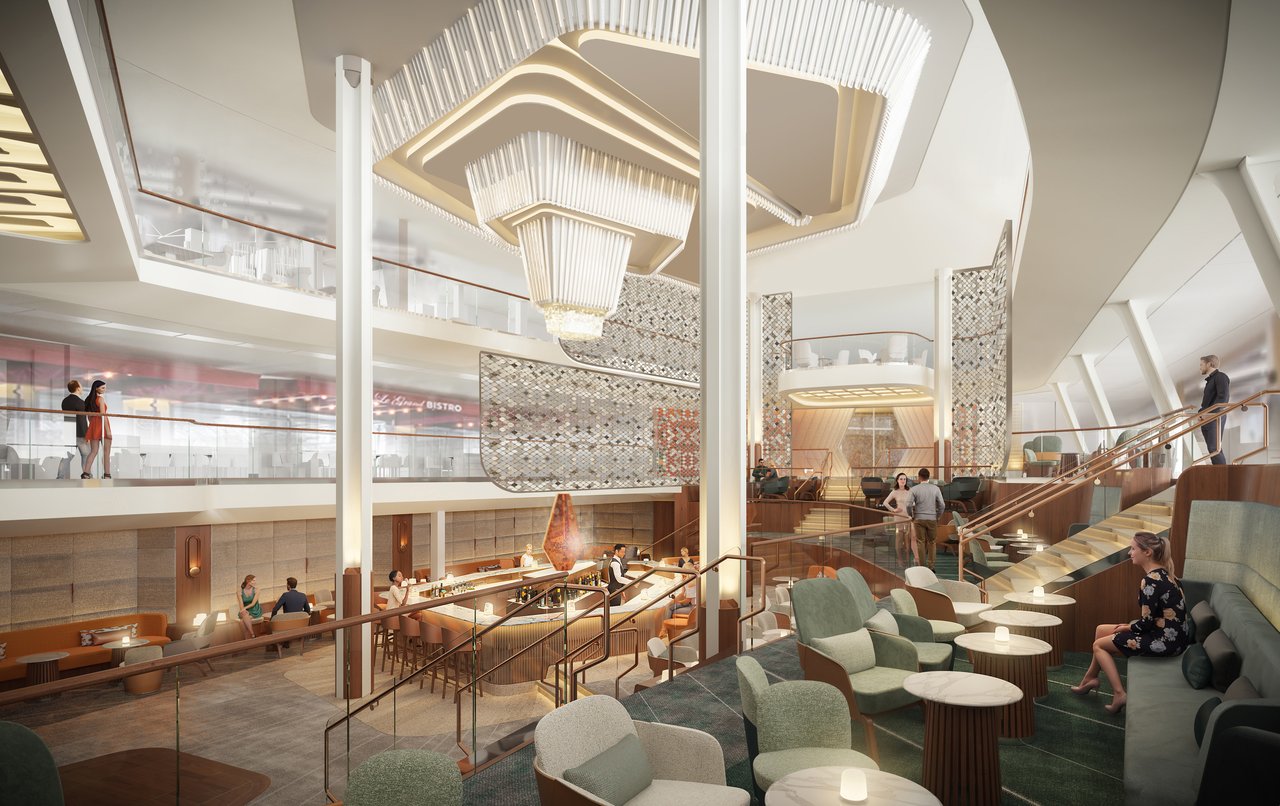 Celebrity Cruises specialises in exquisitely understated ships and this is the biggest yet, keeping the style of predecessors Celebrity Edge and Celebrity Apex yet stretching it both lengthways and upwards to create an even sleeker ship – the work of British architect Tom Wright, known for the wave-like grandeur of Dubai’s Burj Al Arab hotel. That means more decks (17), 179 more suites and staterooms, and a total of 3,260 guests. 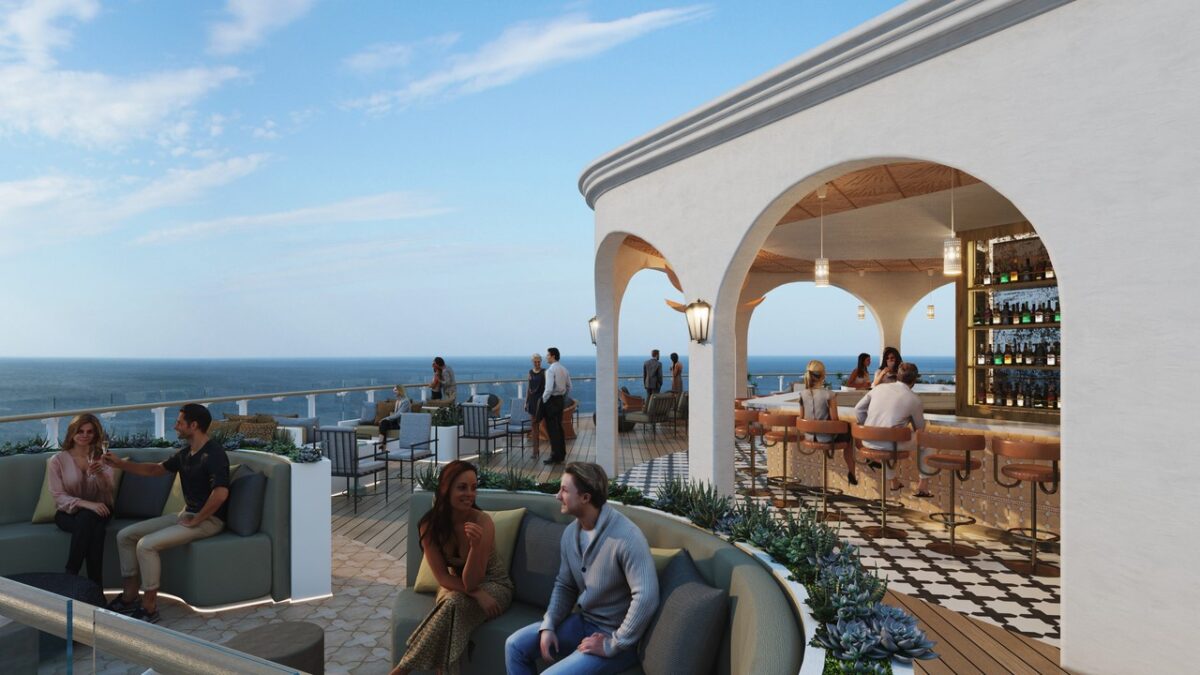 There’s no finer spot anywhere for a sail-away drink than the reborn Sunset Bar, at the back of the ship, now almost twice the size with a Casablanca vibe and terraces.

The luxury element is boosted with two-story villas with plunge pools while The Retreat, the posh resort-within-a-resort area, gets a two-story sundeck.

Top British designer Kelly Hoppen CBE is responsible for much of the look, not least the Resort Deck which turns convention of its head by facing sideways – walkways on stilts pass either side, there’s a 25-yard pool and towering martini glass-shaped hot tubs.

Hoppen’s innovative Rooftop Garden, with its real greenery, is expanded and has pools that are cantilevered over the edge of the ship. Also over the edge is the Magic Carpet, the tennis-court-sized cantilevered platform that slips up and down the side and serves as an open-air lounge and restaurant.

More feted designers get to grips with the Grand Plaza open space – this time it’s Jouin Manku, the French design team responsible for the grandiose Jules Verne restaurant up the Eiffel Tower. Centrepoint is a circular bar above which is a chandelier made up of hundreds of twinkling LED lights.

More big names? Well, actress Gwyneth Paltrow is Celebrity’s new Well-being Adviser and she stocks the rooms in Aqua Class (the sophisticated rooms connected to the spa) with her Goop lifestyle products.

And Daniel Boulud, known for his two-Michelin-star restaurant Daniel in New York as well as eateries around the world gets his first outing at sea with Le Voyage and its global cuisine. 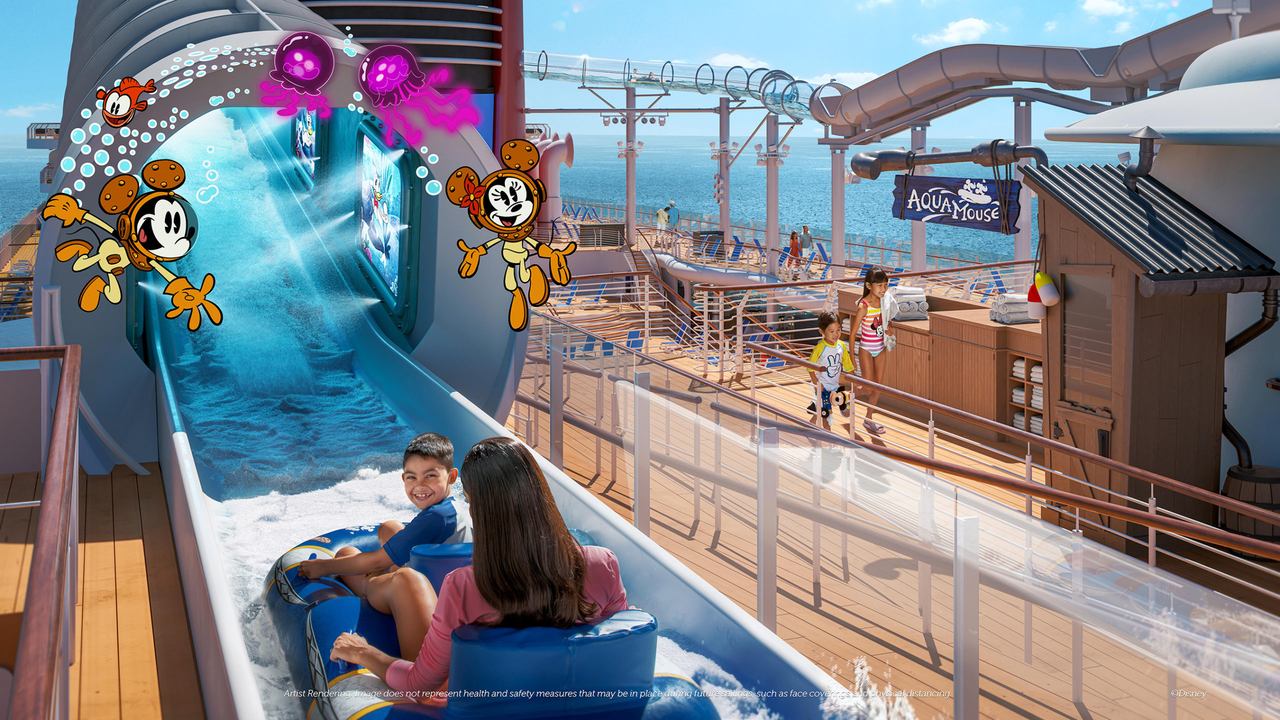 This is the first new Disney Cruise Line ship for almost 10 years – and the first of three to be built by 2025. It is also Disney’s biggest ship, just, carrying 4,000 guests, the same as Disney Dream and Disney Fantasy.

Disney has long been known for its uniting of classic family fun and elegant adult entertainment but here it takes things one stage further with the first ‘attraction’ at sea.

There have been water parks before but this means, lights, music and action on AquaMouse, a wild Mickey Mouse water ride high above the top deck that snakes 760ft amid special effects, animated scenes, and more. It’s part of the big, new Mickey and friend-themed district with six pools sitting amongst the tiered decks. 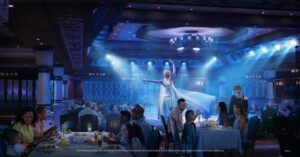 The ship’s third district is strictly for grown-ups… Quiet Cove, a revamped version of a Disney cruise staple with an infinity pool, poolside bar, and smart cafe.

For grown-ups with adventure at heart the Star Wars: Hyperspace Lounge is another first – a smart adults’ night time haven that’s like “a bar on a yacht-class spaceship”. At the launch a Disney executive promised it would be a “sophisticated experience”!

The food world is new too. Arendelle is a restaurant with live performances based on the animated film Frozen. Worlds of Marvel will be “the world’s first Marvel cinematic dining adventure” where guests will play an interactive role in an Avengers mission that erupts around them. And Enchanté by Chef Arnaud Lallement is French sophistication from three-Michelin-starred Arnaud Lallement.

Youngsters get the chance to work off the food at another new attraction, the Marvel Super Hero Academy, alongside real-life costumed characters.

And, like other Disney ships there are included children’s clubs for ages three to 14, hangouts for ages 14 to 17 and a baby-sitting service from age six months.

Most rooms, (70 per cent) come with balconies and a large number with connection doors, also get bigger and better – not least the first rooms over the bridge, giving majestic views over the bow from floor-to-ceiling windows, and a pair of two-storey suites with spiral staircases.

New York: Free vaccinations to be offered to entice tourists to visit the Big Apple