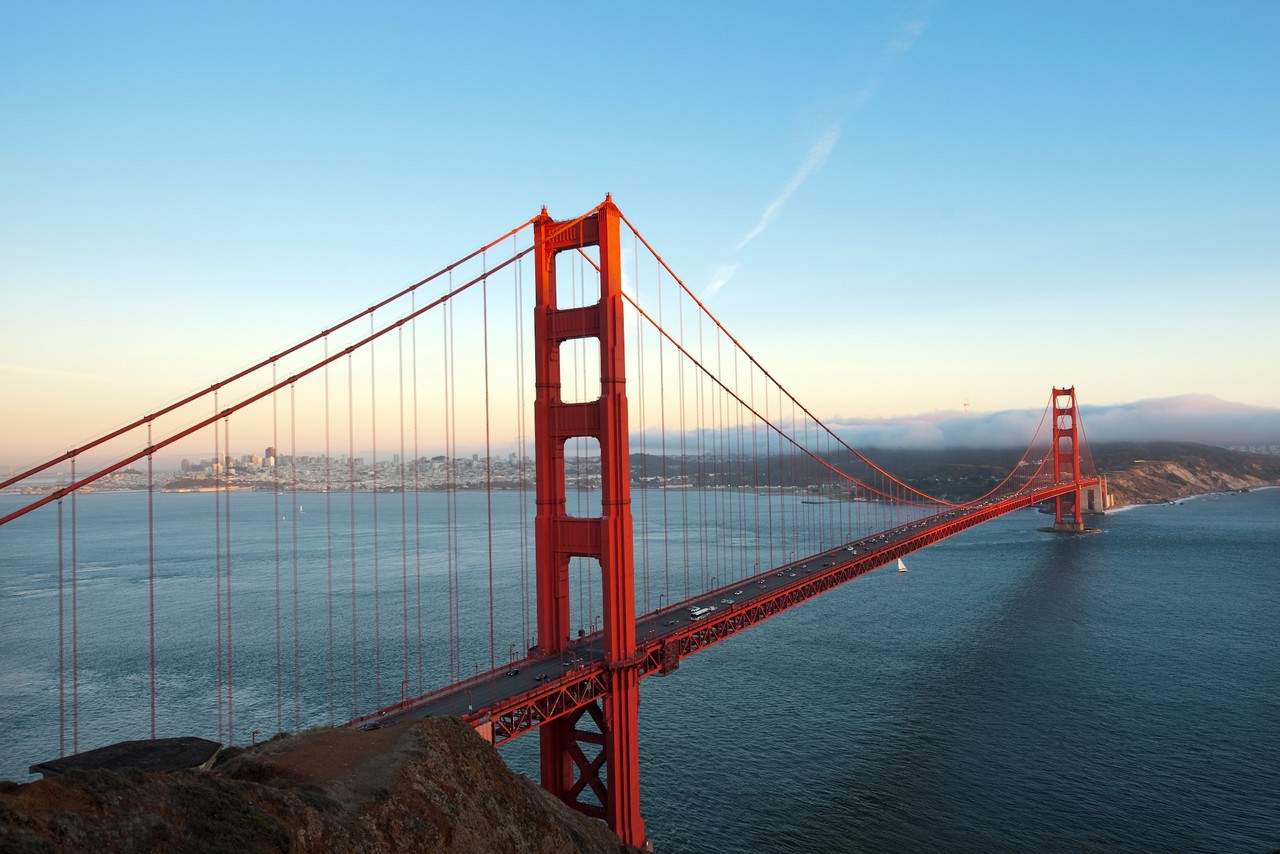 If you think it’s all about the bright and breezy harbour, its world famous bridge and a history based on the gold rush of 1849, then San Francisco still has some secrets for you to explore. Two thousand years ago it was all sand dunes and fog with just 500 native Americans living on this untamed land. But just take a look at this sprawling metropolis now:

Farmers’ Market and the Ferry Building

Get to the Ferry Building which is packed with plenty of unique shopping opportunities. It’s busiest on Saturdays when the Farmers’ market is held at the front of the building and on the rear plaza overlooking the Bay. 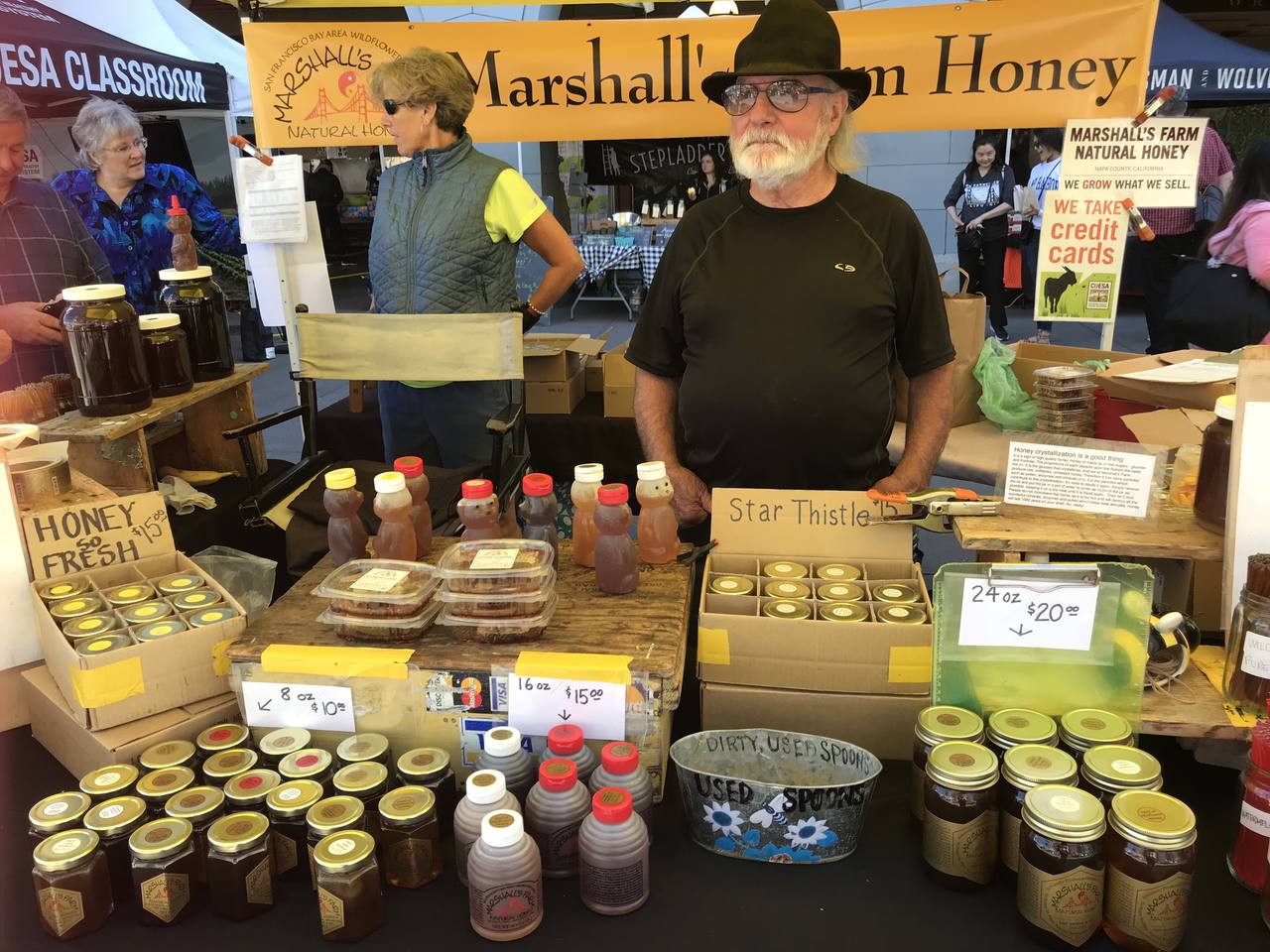 A vendor at the Farmers market c. Sharron Livingston

Go with an appetite and tuck into seafood chowder, raw oysters, fresh vegetables, burgers, wood fired pizzas and pies. Find a place to perch and enjoy your food and San Francisco’s perfect, breezy weather at the same time.

Fancy a walk? You don’t readily associate hiking with San Francisco, but a short drive along windy mountain roads with an elevation of 2,000ft, passing Sausalito and lush valleys lead to Muir Woods. Named after conservationist John Muir, this is home to the iconic Redwood Trees (Giant sequoia). 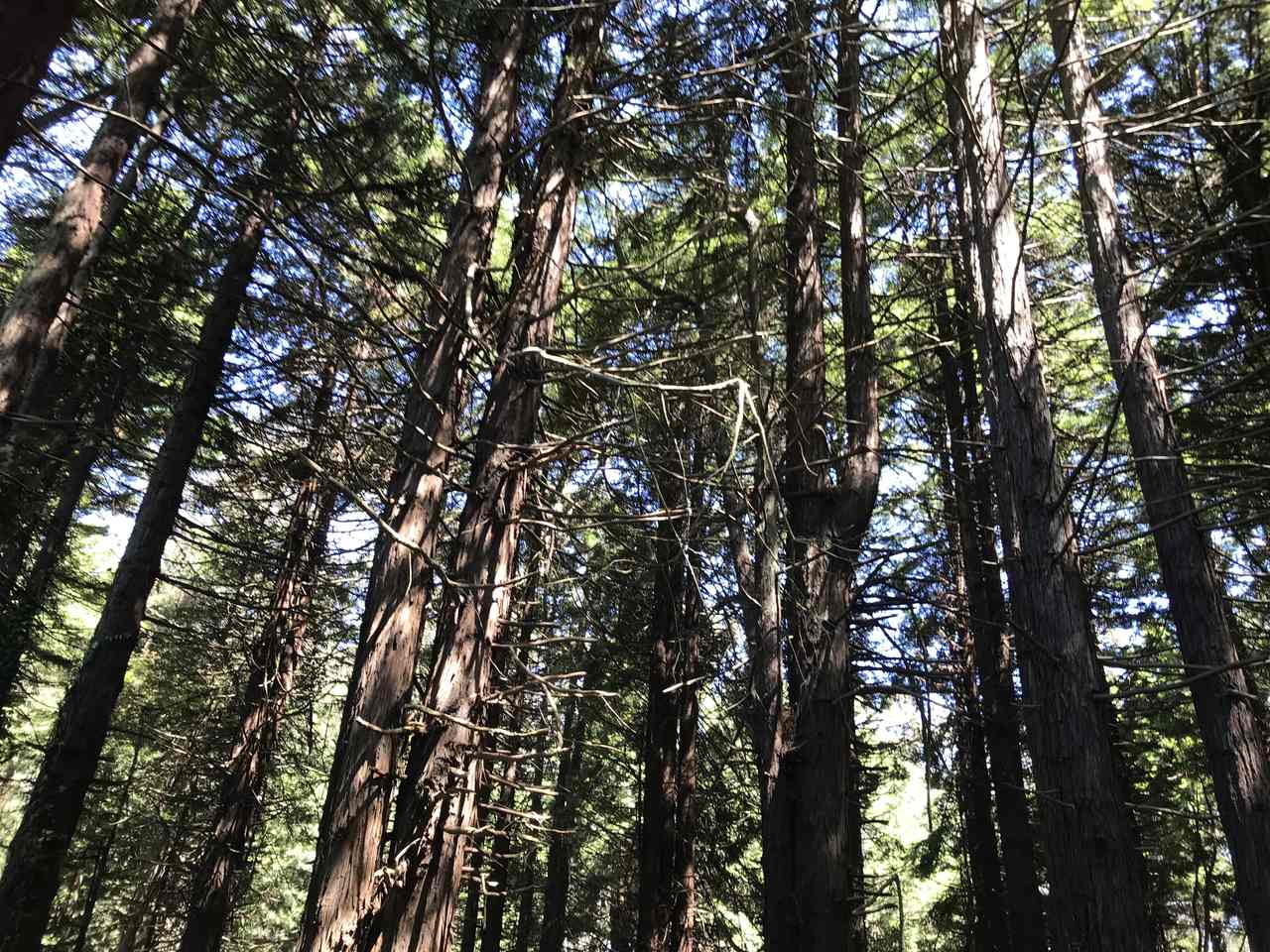 They stand tall 379 feet (116 m) tall and close forming a canopy offering some blessed shade. Look up and there’s a heavenly interplay between light dappling through the leaves. Their red trunks are often wide enough  to stand in the hollows – it can be quite meditative.

Later grab a hot chocolate in the cafe. It’s made by Ghirardelli – the go-to San Francisco based chocolaterie.

San Francisco became the city most famous for the hippie movement and to find out more you can do a love tour of the Haight-Ashbury neighbourhood. A guide (our guide was Wes) from Wild SF Tours turns up in 60’s gear with a guitar. With cheeky narrative and songs the tour takes you back to the Summer of Love in 1967 when hippies moved into the area because rents were cheap. 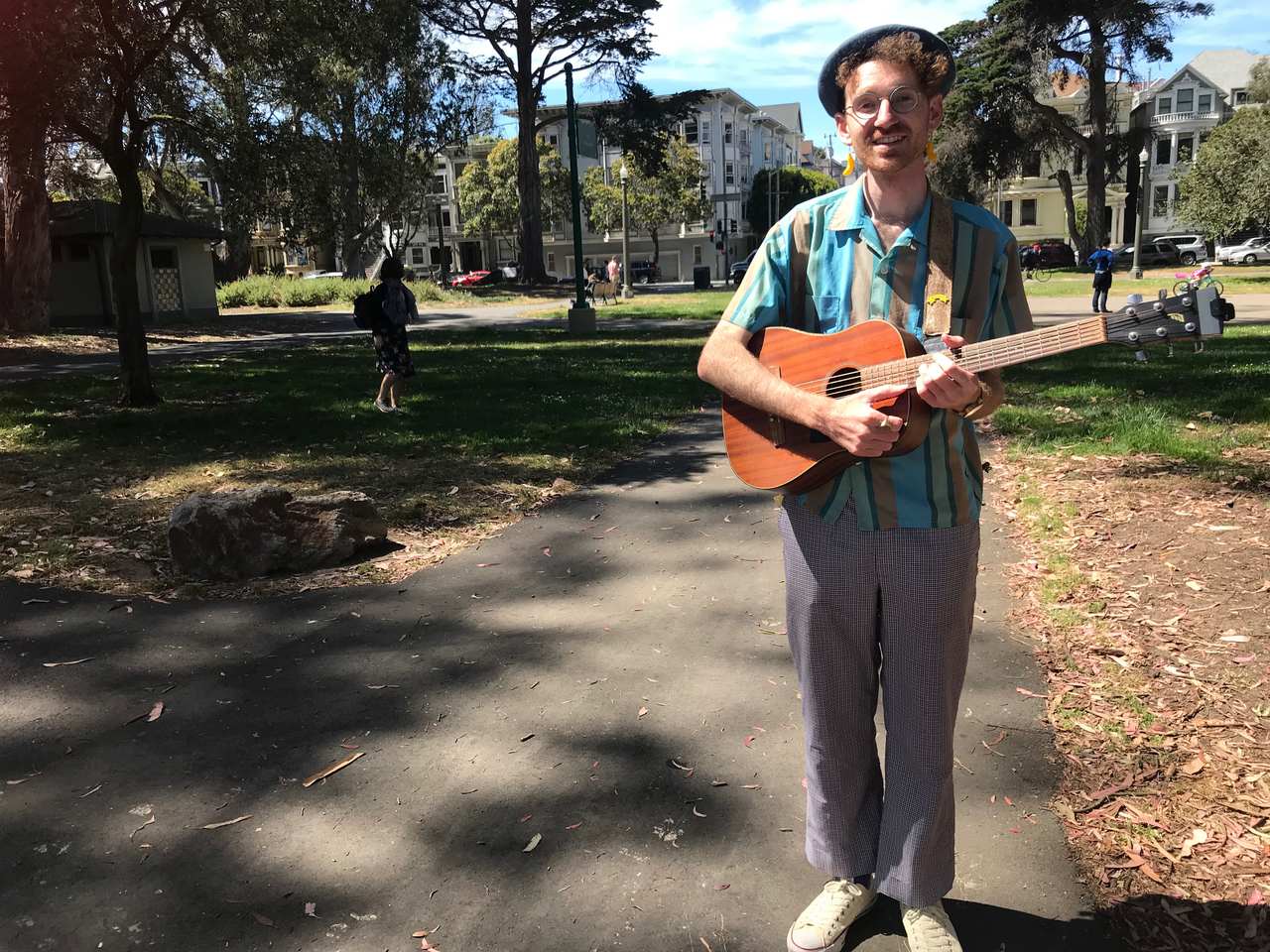 It was the time when LSD was freely taken, baby boomers lived a Bohemian lifestyle reading Jack Karowack and when Janis Joplin and Jerry Garcia were in the hit parade. Every now and again Wes burst out into some toe-tapping song from the era.

We saw The Grateful Dead’s hallowed psychedelic home at 710 Ashbury opposite the home of Hell’s Angels and rock goddess Janis Joplin’s pink apartment.

There is no fixed fee for this tour – in the spirit of Free Love, you just pay what you want (though they suggest between $15 to $20).

This is probably the most underrated and overlooked highlight of this amazing city. I’m referring the former Spanish military base that was once home to the Ohlone people and is now a National Historic Landmark. Yes there are great hiking trails but it’s the culture that lurks in the remodelled historic buildings that are of interest.

Andy Goldsworthy, an English artist from Yorkshire, used natural materials to create four truly quirky installations. One room called “Tree Fall” has branches made from clay and human hair over Eucalyptus tree emerging from the ceiling.

Admittedly though the best part of the experience is the Off The Grid Presidio Picnic. This takes place on a huge lawn where a long fleet of food trucks serve all types of cuisine – including vegan. It takes place during the summer on Sunday afternoons and it’s a fabulous way to spend an afternoon. Don’t miss it.

An amazing cocktail experience at the Tonga Room

Head over to the tropical themed Tonga Room in the Fairmont Hotel on Mason Street for a Mai Tai (their signature drink) or other cocktails. Its tribal decorations on the walls give off a real tiki vibe. Tables surround a swimming pool and every now and again there are thunderstorms and lightning followed by a rain downpour while music escapes from a tiki hut. It’s incredible fun. You can eat Polynesian-fusion cuisine here, but really it’s the experience that makes this place a must-visit.

This is probably the most photographed (or in modern parlance “instagrammed”) suspension bridge in the world. And no wonder; it is a beautiful grand Art Deco landmark looking colourful dressed in international orange – a colour chosen so that it can be seen in the fog. Its six lanes of traffic that stretch 1.7 miles over the Golden Gate Straights. 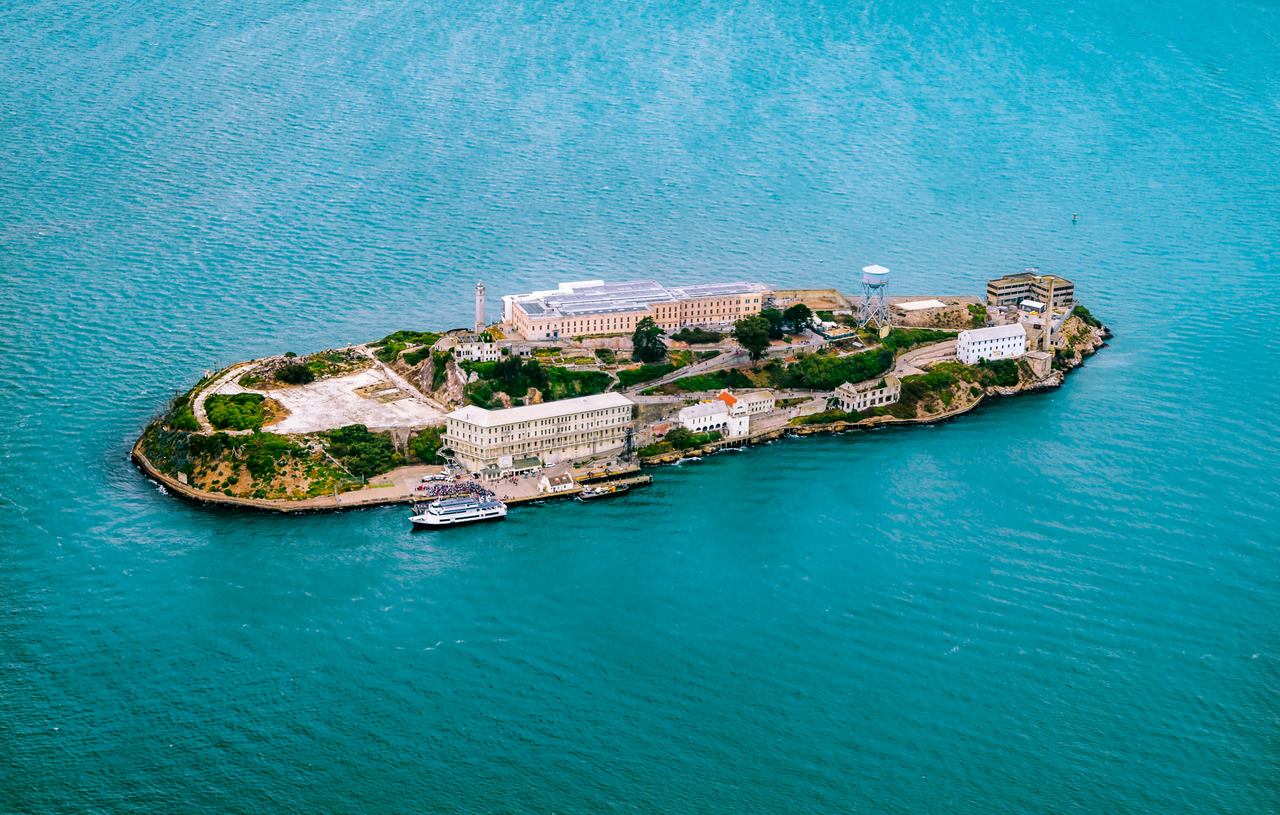 You can see Alcatraz Island from the Golden Gate Bridge

The views from the bridge are great and you can see the now defunct Alcatraz high security prison, where Al Capone famously played his banjo.

Dinner on a Hornblower Cruise

A Hornblower dinner cruise is a charming way to end the day. Dinner is served to ever-changing evening views of the shoreline, the bridges and even Alcatraz. Nip on deck between courses to check out the views or get into the groove of the live band on the dance floor.

ALSO READ: 12 restaurants in San Francisco to try in 2018 (one for each month)

FLY: The flight with Icelandair from London Heathrow to San Francisco starts from £447.80 return, including all taxes, fees and charges (price is based on travelling in September 2018).

You can stopover in Iceland en route for up to seven days without paying extra fare charges. The Iceland to San Francisco route is currently running four flights a week. As well as the extra legroom, the aircraft also has onboard wifi.


Did you know: that San Francisco is home to the headquarters of Airbnb, Uber and Twitter.

5 ways to get the most Insta-worthy travel pics