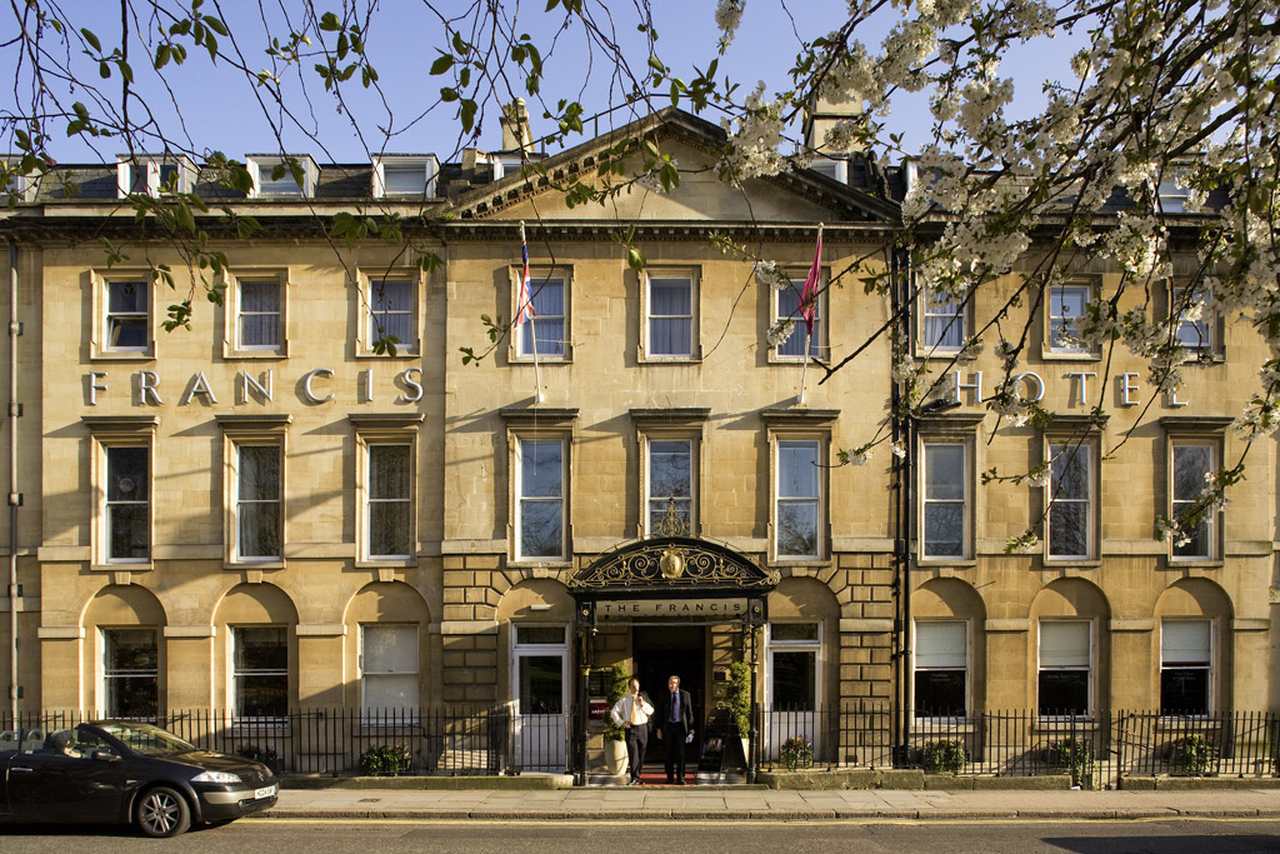 The handsome Francis Hotel is an amalgamation of an impressive collection of seven limestone-clad Regency townhouses facing Queens Square.

The hotel’s life in hostelry dates back to 1858 when Emily Francis, a leading entrepreneurial lady of her time opened the doors to guests into this neo Regency building – it was only four townhouses then.

In 1942 the building was directly hit by a bomb but it has resurrected into this fine hotel that literally dazzles when the sun hits the honeyed-coloured stonework.

Inside there is a restaurant, a tea room, a quaint bar with pink lighting and 98 bedrooms each with their own personality. In fact, the various areas of the hotel are distinctive from their decor. Even the communal areas morph as you pass from one segment to another.

It’s an illusion of compact cosiness.

A long canopy heralds the revolving doors that lead to a small bright and bold reception area that has been adjusted for COVID – staff are behind screens and a one-way system is in place.

Overall the hotel has the air of a small boutique hotel. It’s an illusion of compact cosiness yet in reality there is plenty of space.

Couples on a weekend away would truly appreciate coming home to this hotel. For families, there are interconnecting rooms. 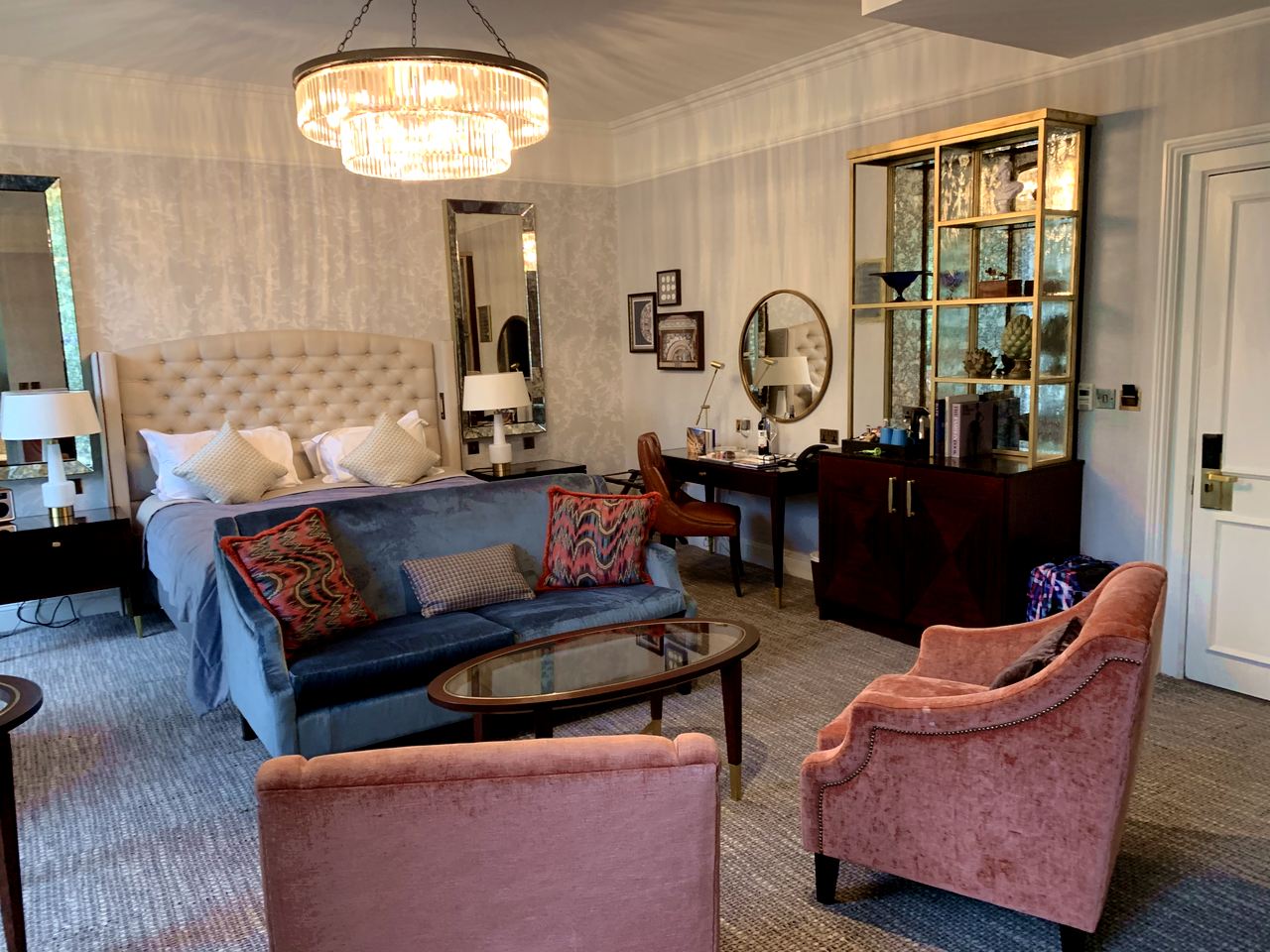 The Francis. though a chain hotel, is part of the MGallery Hotel Collection of boutique hotels where variety, not conformity, is what defines them.

The Francis has three tiers of room, Classic – these tend to be the smallest, Superior, you get a Nespresso machine and Feature Rooms which come with so much more space.

They are all unique and the featured rooms are the quirkiest – some have bold colour schemes and gilt mirrors while others more  ‘contemporary” such as the one I stayed in; the John Wood Feature Room. It is named after the famous Bath architect John Wood the Elder, creator of Queen Square opposite the hotel.

Some come with a bath, the others have a shower and a couple have four-poster beds, but all have sweet-smelling Noir toiletries. One room has a painting of sheep on the ceiling so you can’t count them to help you drop off and the piece de resistance has to be the shower with a huge mural of the Romans baths as its backdrop. 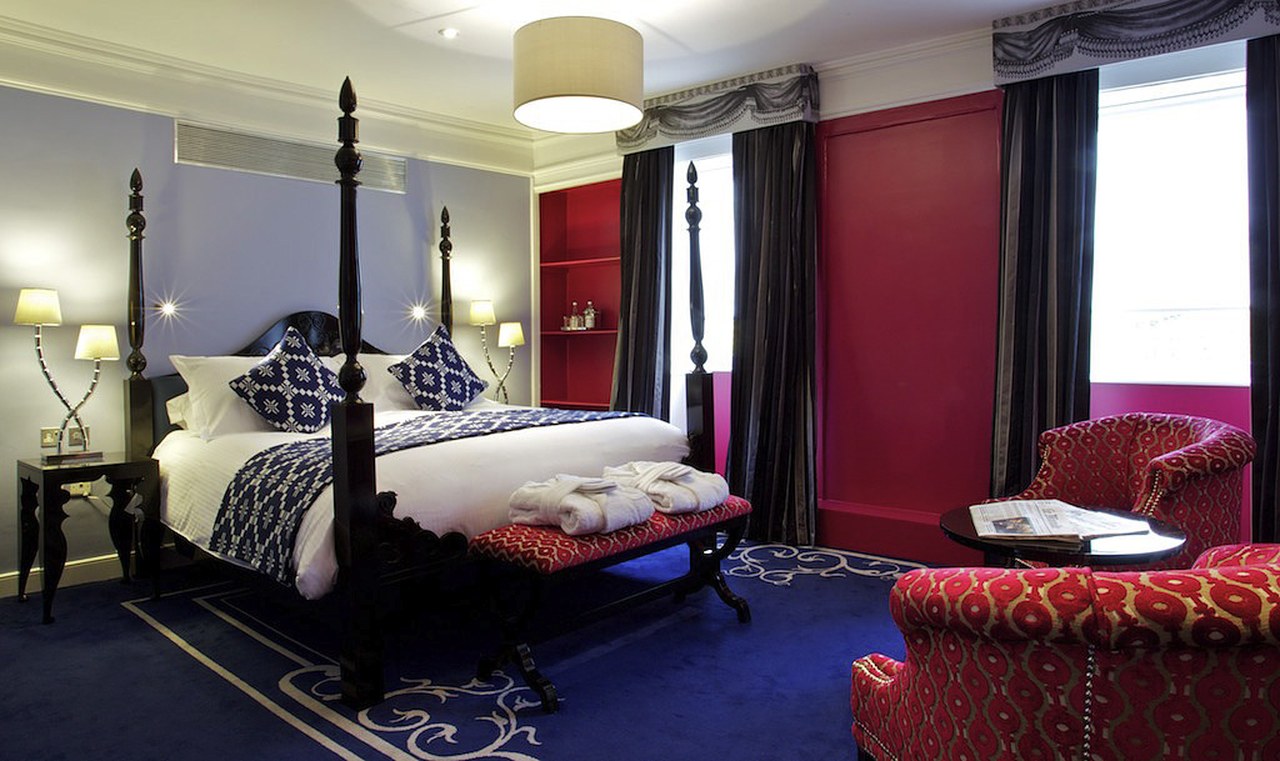 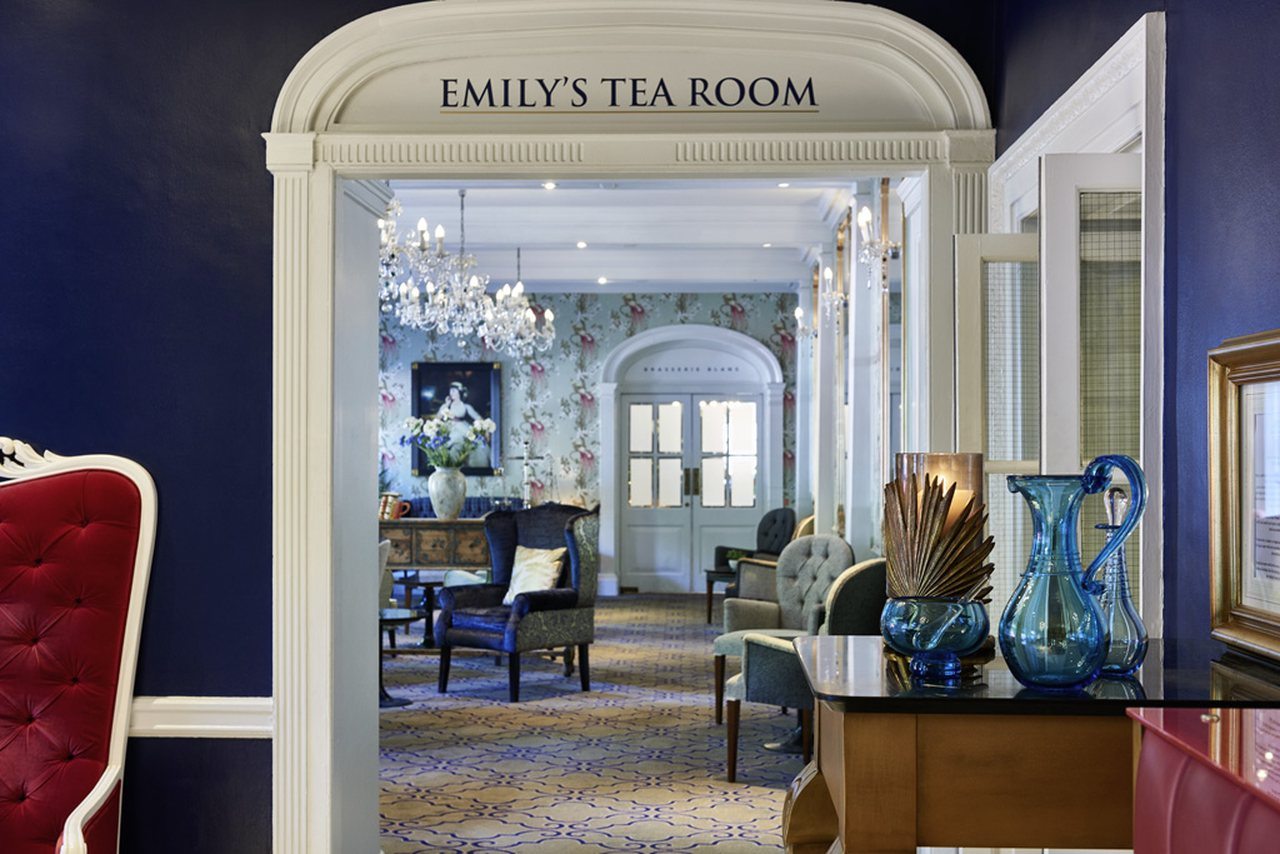 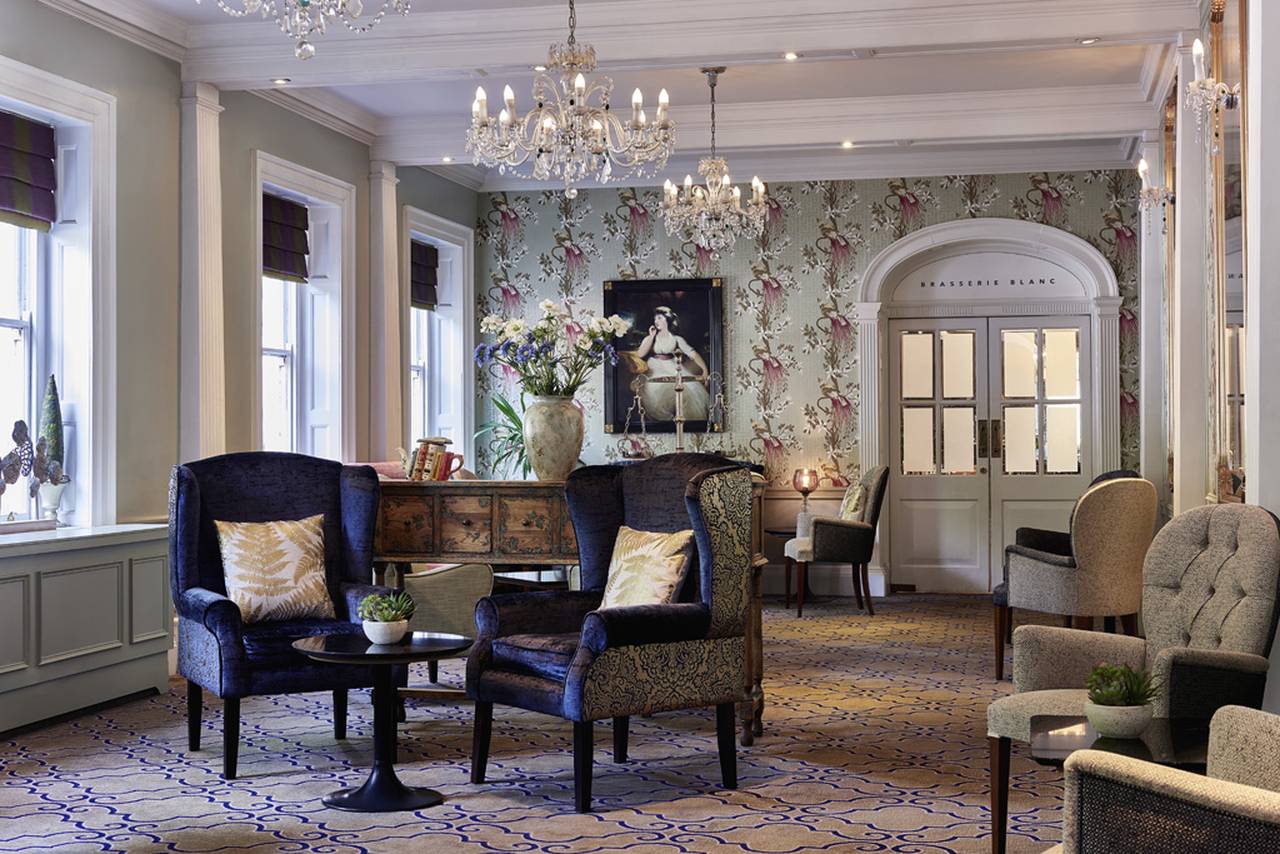 Traditional British afternoon tea is served daily in Emily’s Tea Room while the No. 10 bar serves whatever your tipple is in a convivial environment. Both are also great spaces in which to chill and enjoy the decor.

The dark-wood restaurant with its warm lighting has an eclectic menu which features wine pairings. Even so, I went for the specials – coconut and potato soup followed by sea bass served on a bed of crushed potato.

Had I fancied breakfast in bed, I could have, as they do in-room dining well. They have their own car park to the rear – there is a charge of £20.00. Wi-fi is available throughout and it’s free. Oh, a charming concierge service who will help with your bags and offer info and a map of the local area.

The hotel has a central location right opposite Queens Square  – do check out the 18th-century obelisk. It was built with a needlepoint but then blunted courtesy of lightning in the 1830s.

Around the corner from high brow shopping of Milsom street (think Bond Street). The Roman Baths and the imposing Bath Abbey are a couple of minutes’ walk away. Thermae Bath Spa is also close by where you can swim in the city’s spa water. The Jane Austin centre is around the corner too and the famous Circus is just beyond Queens Square.

Francis Hotel Bath is a 10-minute walk from the Bath Spa train station and a 10-mile drive from junction 18 of the M4.

Classic Rooms start from £129 including breakfast.

BOOK your stay at Francis Hotel with SECRET ESCAPES

BOOK your stay at Francis Hotel, Bath with BOOKING.COM

Three Tiers for England that could End in Tears for Travellers