Norway: 680-mile road trip from Stavanger to Trondheim in 2 days 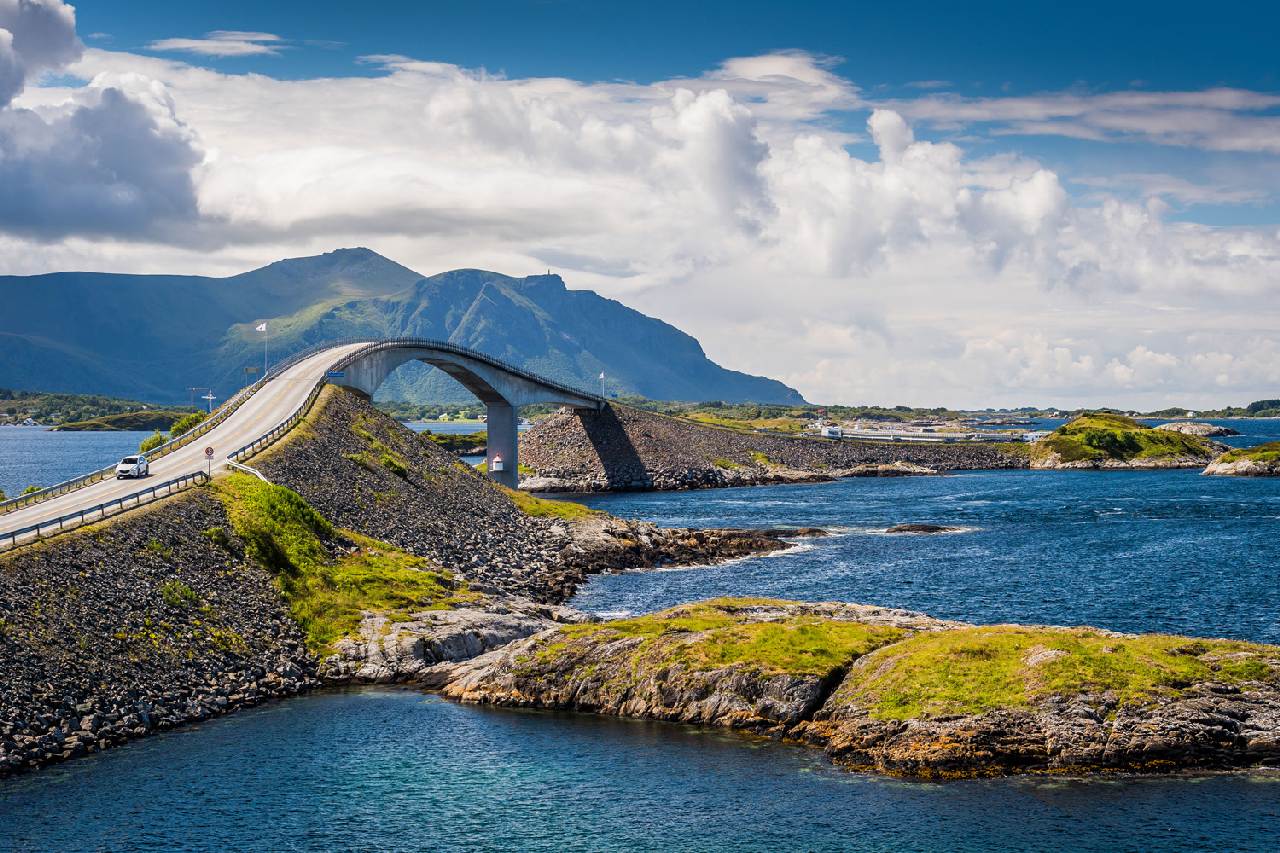 I knew it would be a nutty exploit driving 1,100-kilometres (around 684 miles) in two days along Norway‘s coastal road. So why did I do it?

Well, it wasn’t for the weather. It drizzled most of the time with the sun taking a sneaky tantalising peak through the clouds every so often. The elements teased right through to sundown at 11pm – a late sunset is a a quirk of Norway’s daylight cycle during the summer months.

It wasn’t a boozy trip either as a humble pint of beer knocks you back £12 and with just over 5 million people in a space as large as the UK, the nightlife was not exactly heaving.

And forget about the romance of negotiating winding roads at speed – the 80km/h (50 miles) limit is strictly adhered to and without any specific fine range, a speeding fine could empty the bank coffers.

Yet there are some compelling reasons: the roads are utterly superb – a sure sign of the expense and attention paid to the infrastructure – the scenery of fjords, waterfalls, mountains and lavish greenery is exceptional and with six road-ferry combo experiences peppered throughout the road trip from Stavanger to Trondheim, you get to see different perspectives of the scenery from the water.

You may also like: From Oslo to Bergen, and the spectacular scenery in between 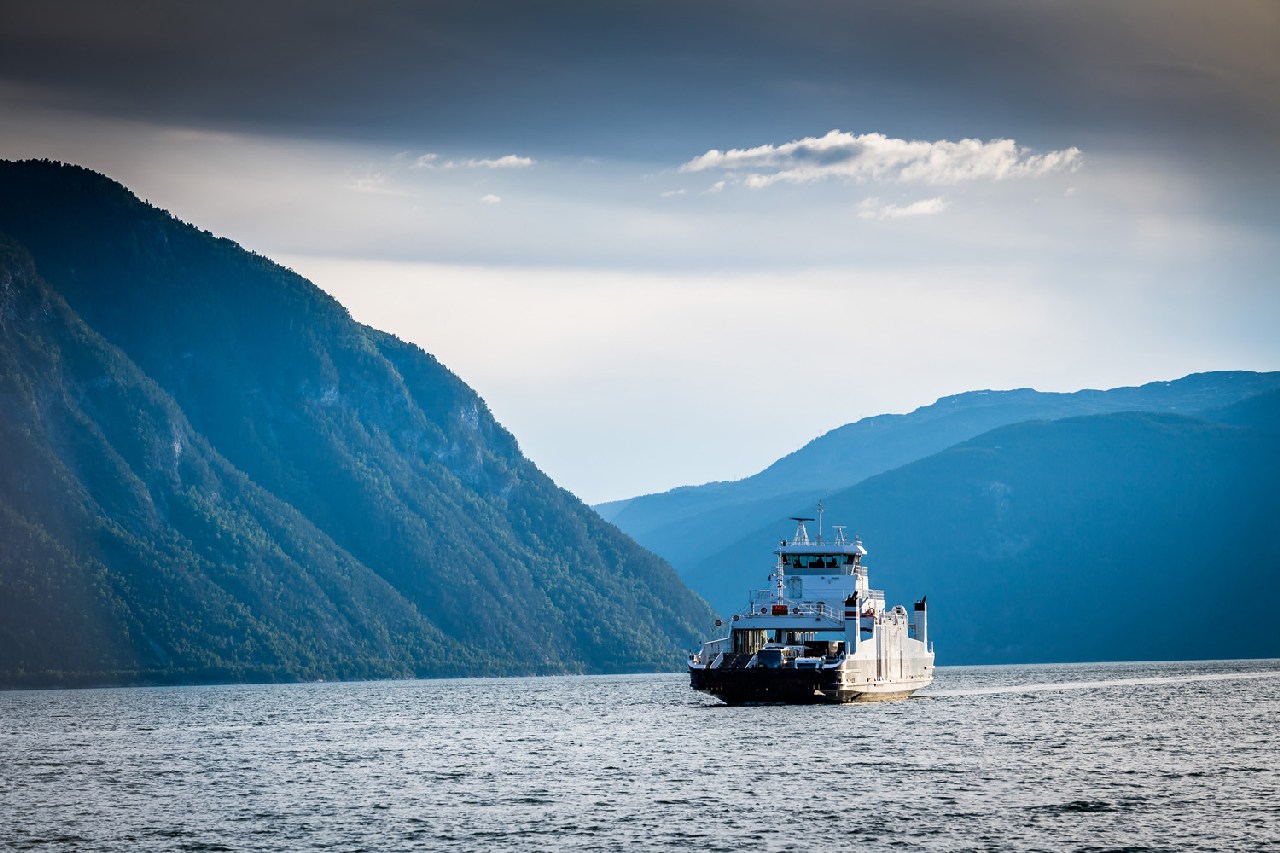 So, I  picked up my 2-wheel drive Mazda CX-3 in Stavanger the evening before – a car which for a mildly nervous driver like myself – seemed solid enough to steer me through some hair-pin strewn mountain roads and narrow tunnels. 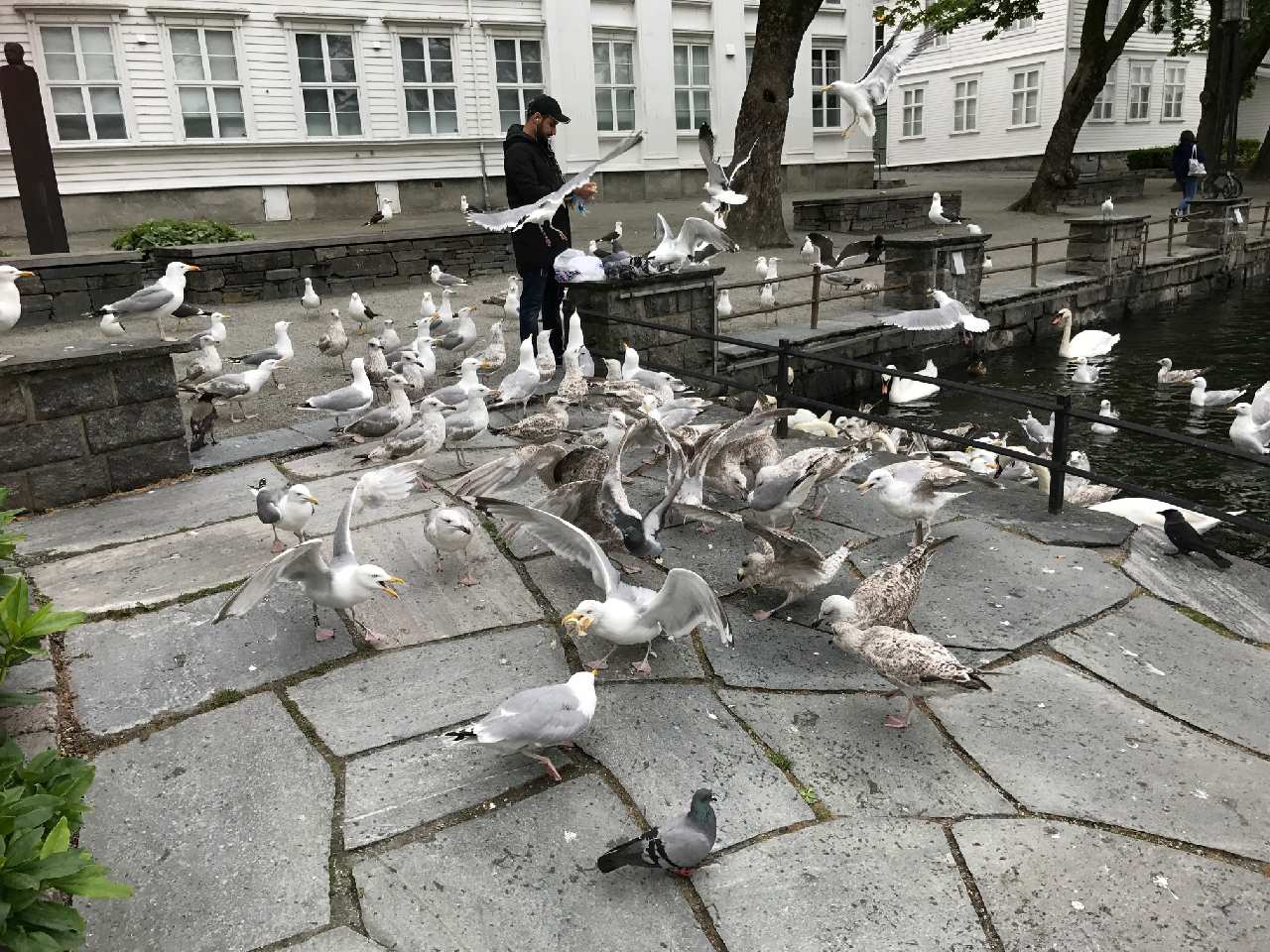 The lake in Stavanger with birds 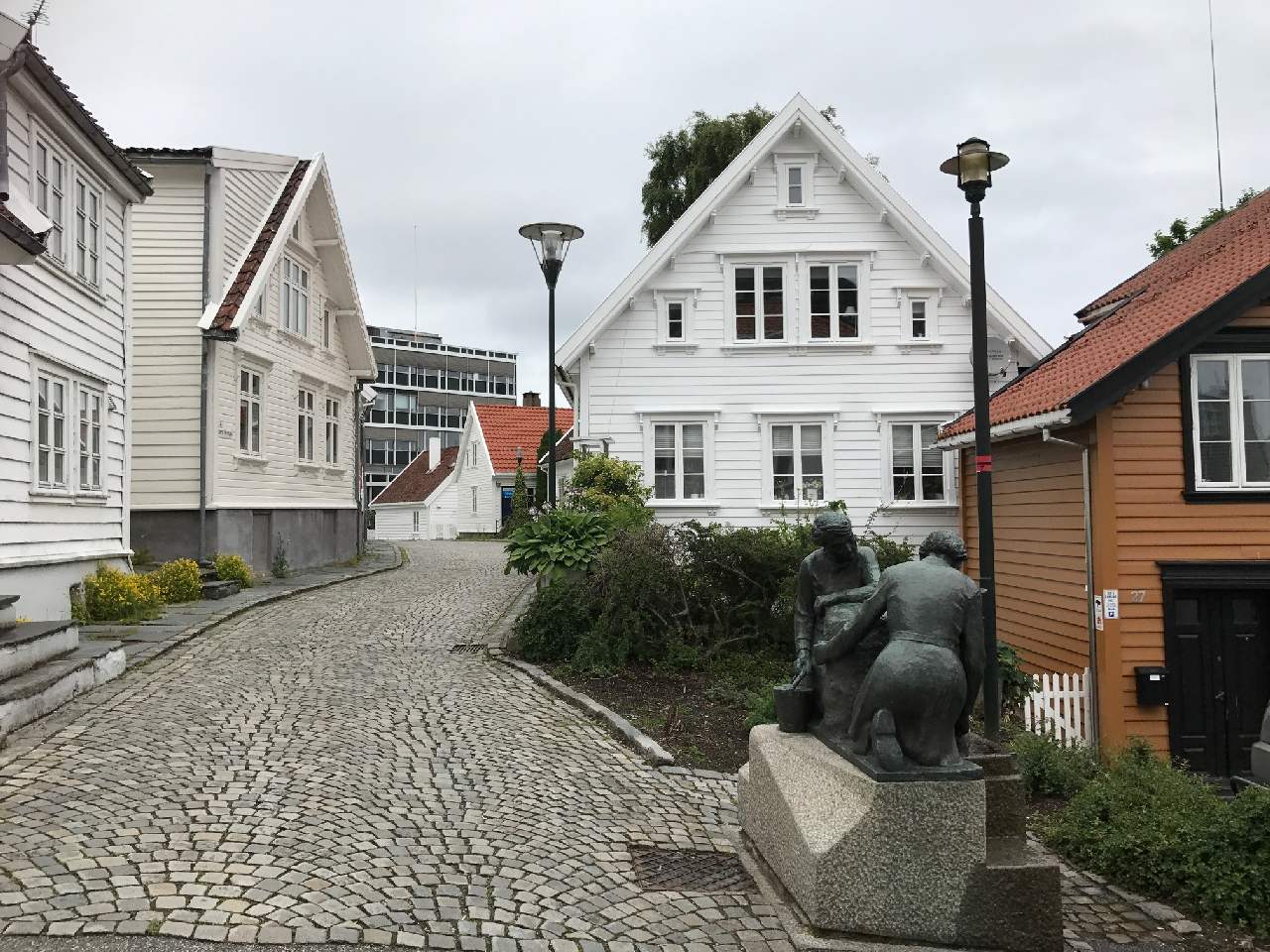 With so much daylight I explored Stavanger that first evening. It’s a handsome town with a pretty harbour, wavy streets lined with white clapperboard homes. There’s a pretty lake too replete with swans, seagulls, ducks and some loitering sparrows that broke out into a frenzy at the mere hint of any bread being thrown their way.

In the morning I awoke with the birds around 5am for an early 6am start for the first leg of the trip to Loen. I braved the drizzle and got into the car with a trusty breakfast pack in hand, which I learned was a highly-prized provision since there was not a single eatery along the way other than at the odd petrol station and possibly at campervan resorts. 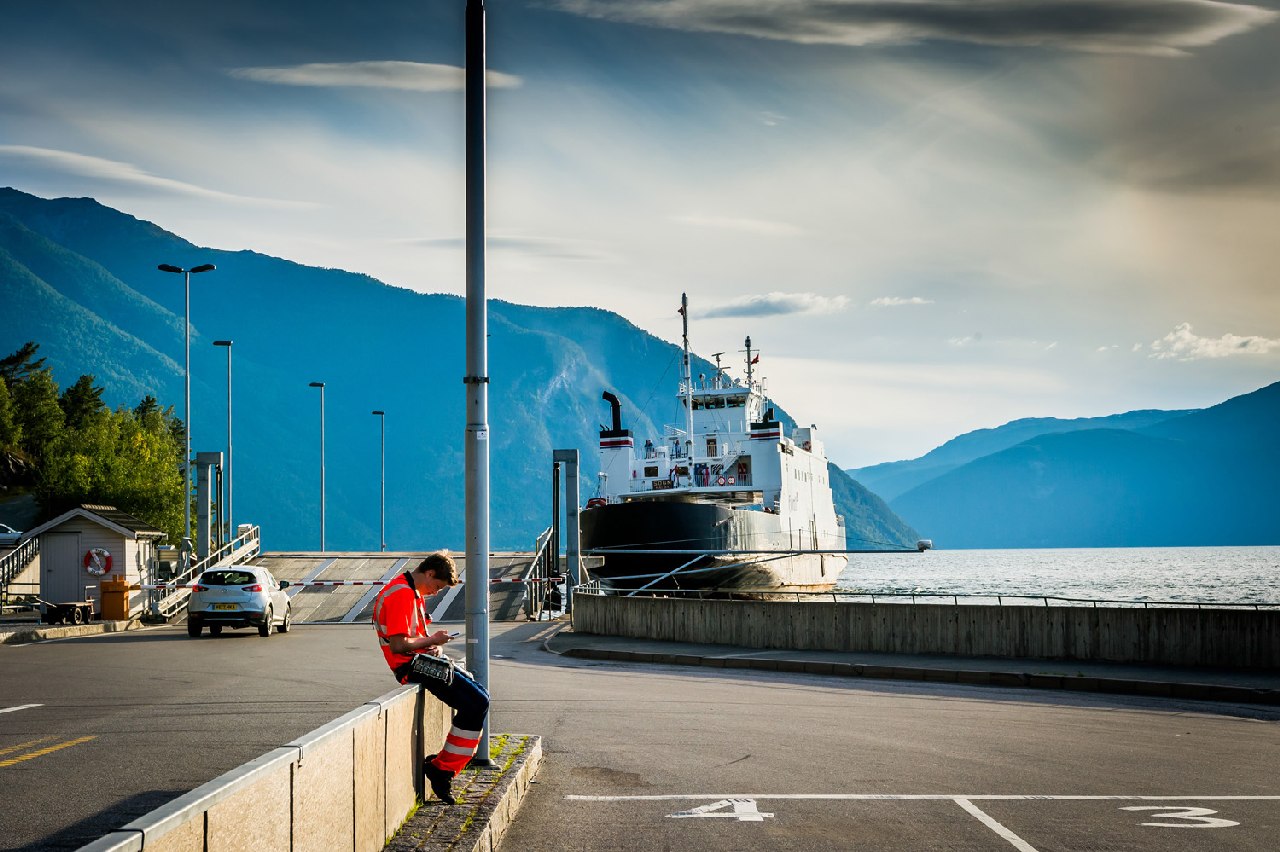 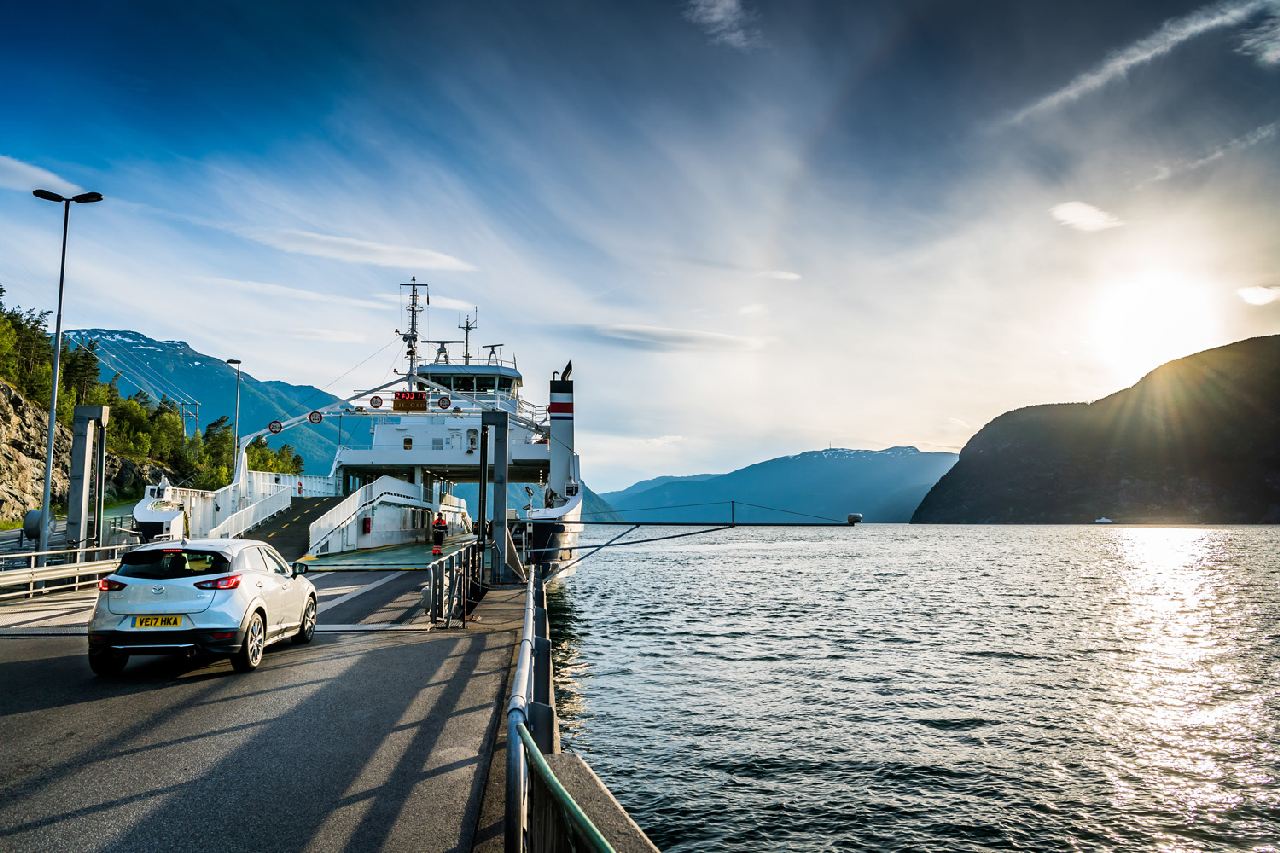 The ferry crossings were regular and efficient and my early start meant being able to avoid the deluge of campervans and inevitable queues that hit the road slightly later in the day.

The roads were incredibly smooth and I passed miles and miles of rocky or lavish emerald green terrain and mountains rising into low hanging clouds. It was haunting yet beautiful all at once. 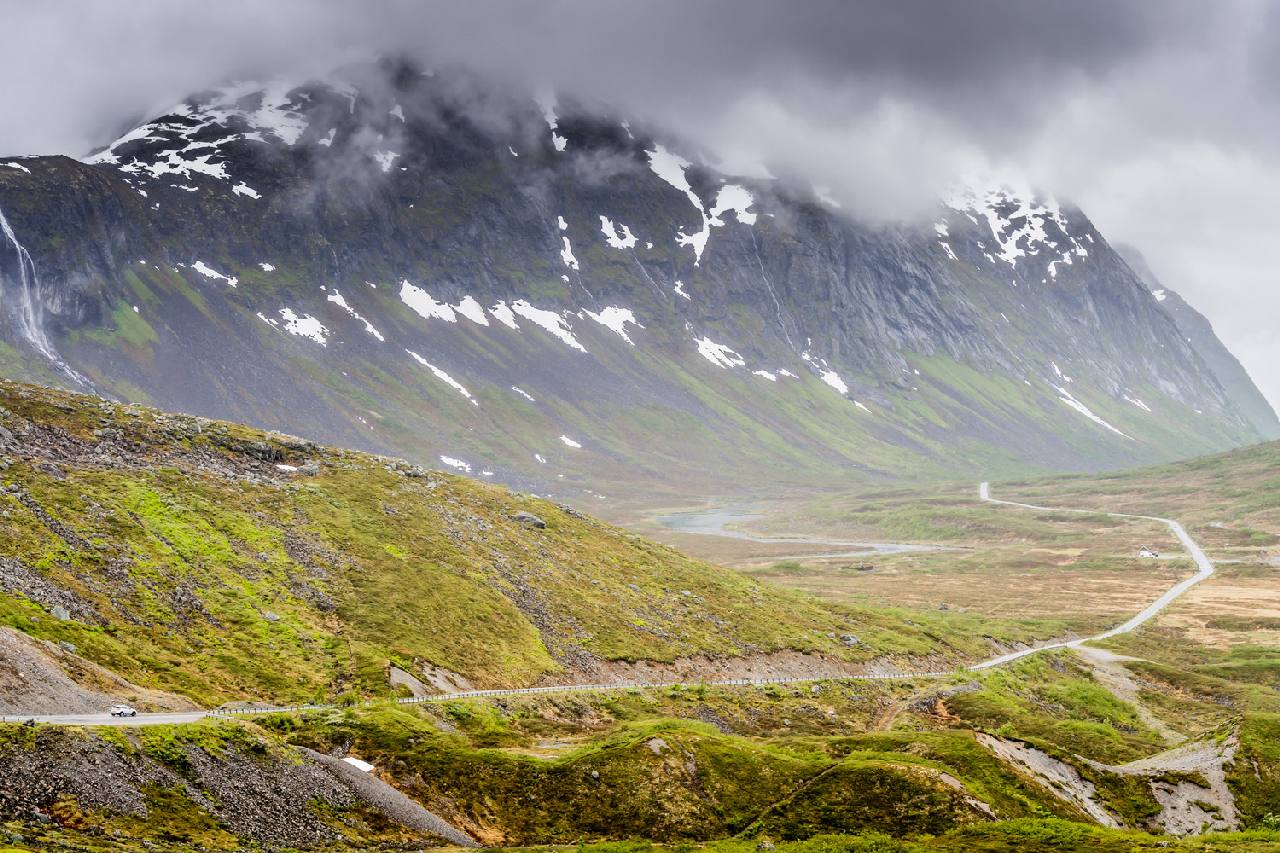 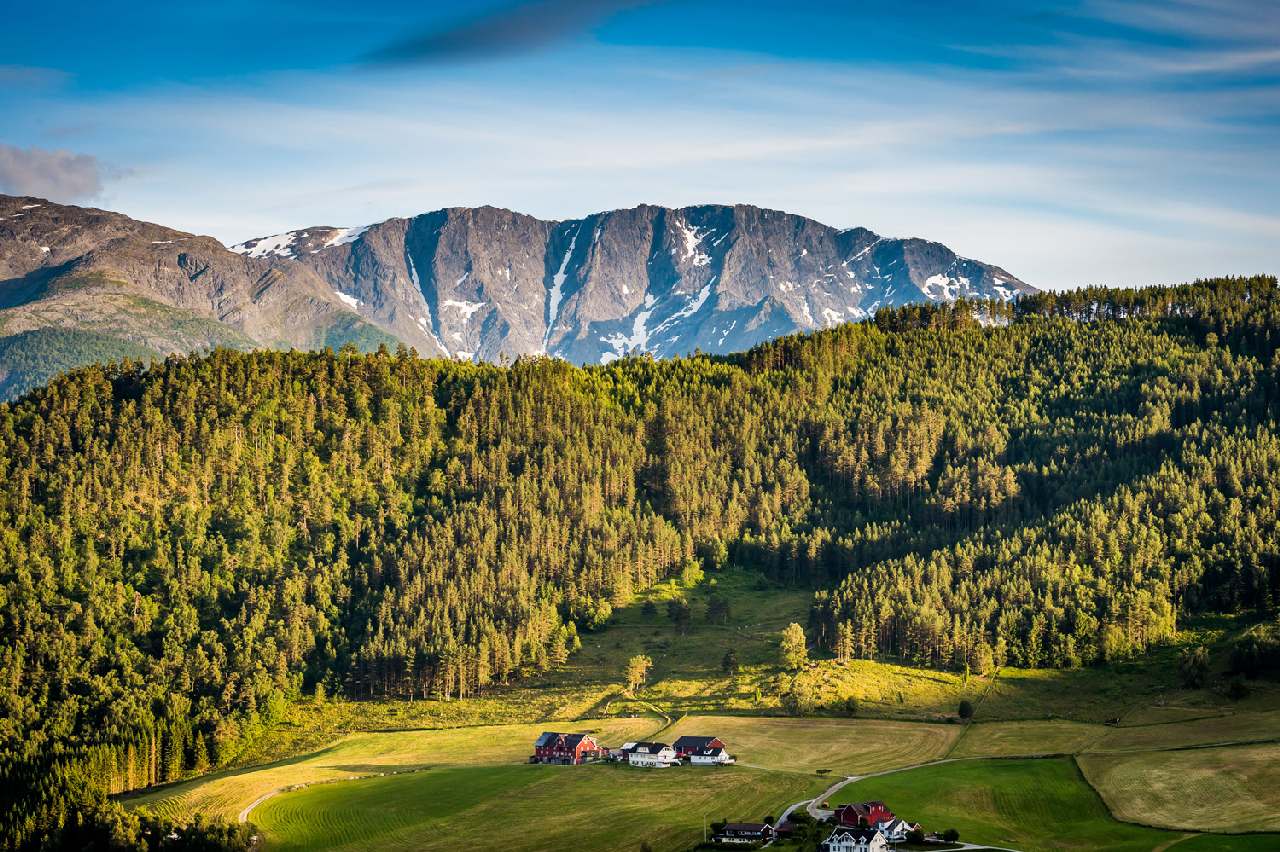 At Etne it was a slow crawl at just 40kms with a road climbing up to at a 10 per cent incline taking in a mountain tunnel only to find that at the other side the elevation had dropped. My ears popped several times and before they could unpop there was another tunnel and yet another which finally deposited me into a valley where a smog had moved in. And just as I adjusted to light at the end of one tunnel another appeared. This was becoming hard work.

Then as easily as a baby’s smile disarms you, the dramatic Langfoss waterfall, the fifth-highest waterfall in Norway did the same. I came upon it on E134 by the ÅkrafjordIt and could feel the wind created by its incredible force ruffle my hair as its massive volume of water 2,000ft fell into the Akrafjorden. 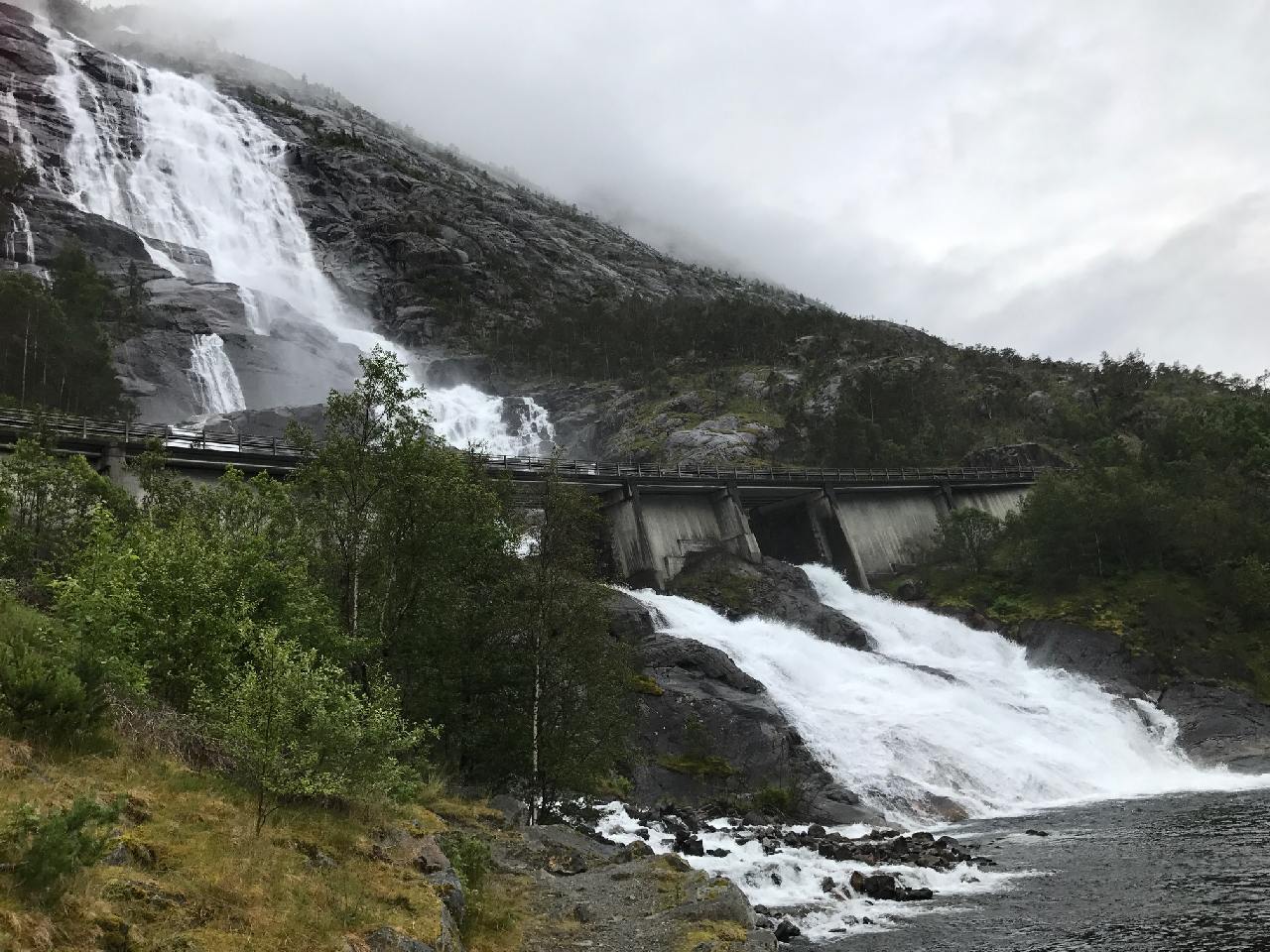 Further on route 13 at Odda, the twin falls of Latefoss waterfall are an intriguing spectacle with two falls dropping 165m simultaneously into a rapid stream. Imagine the noise and the spray. The area is ripe for exploring, and hiking with plenty of trails. If only I’d had more time.

But there was still lots more road and tunnels to cover. And though I wasn’t a fan of these amazing feats of engineering, the Laerdal tunnel was altogether a different thing altogether.

The Laerdal tunnel connects Lærdal and Aurland in Sogn og Fjordaneis. It is a staggering 24.5 kilometres (around 15 miles) and is one of the world’s longest road tunnels. It saw 2.5 million cubic metres of rock being excavated costing $125 million over the fives years it took to build.

It could have been an extremely monotonous drive and to stop the inevitable dropping off at the wheel they built three massive, brightly-lit chambers into the tunnel which appeared every six kilometres. It is also the first tunnel in the world first to be equipped with an air treatment plant meaning drivers really can breathe easy. 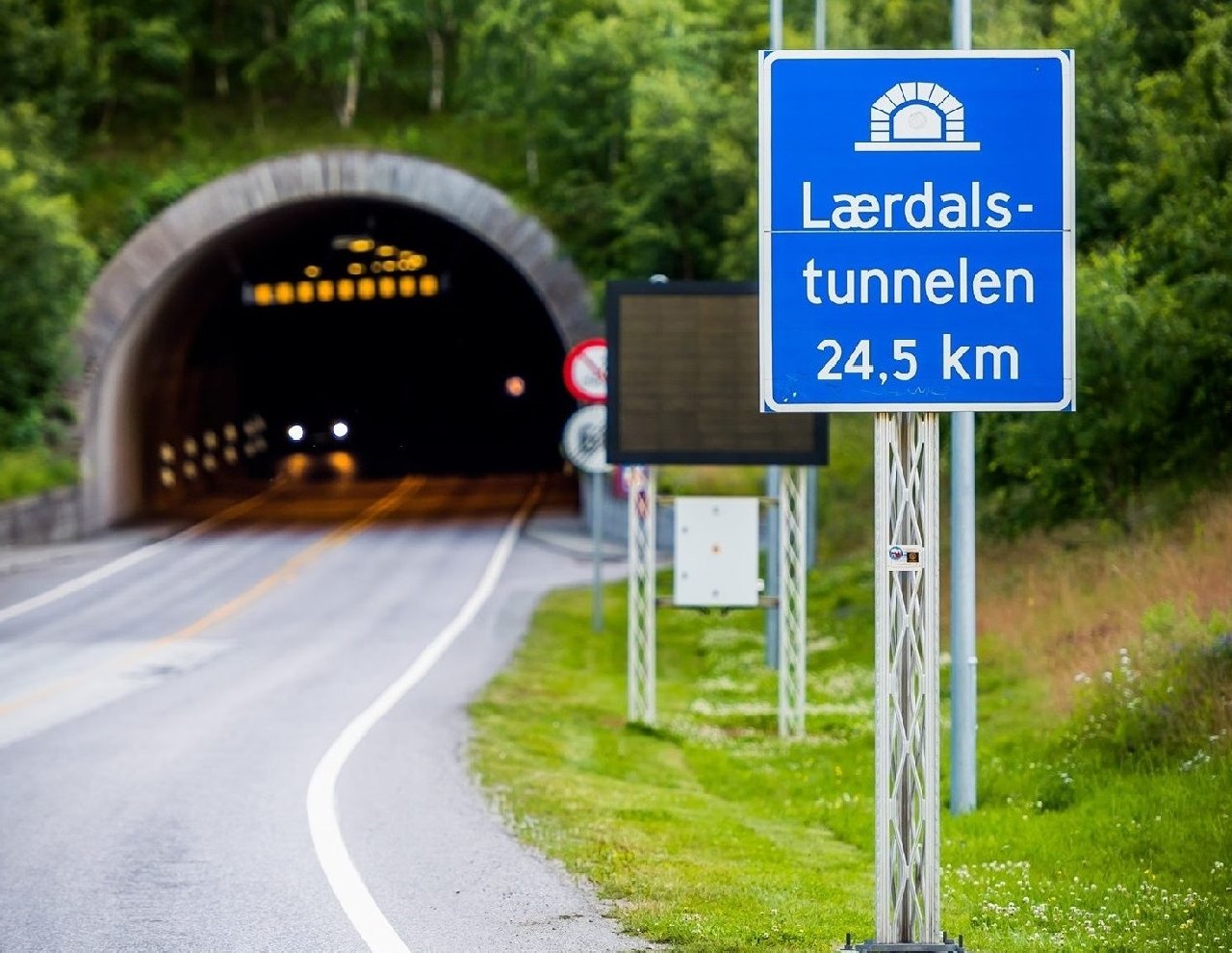 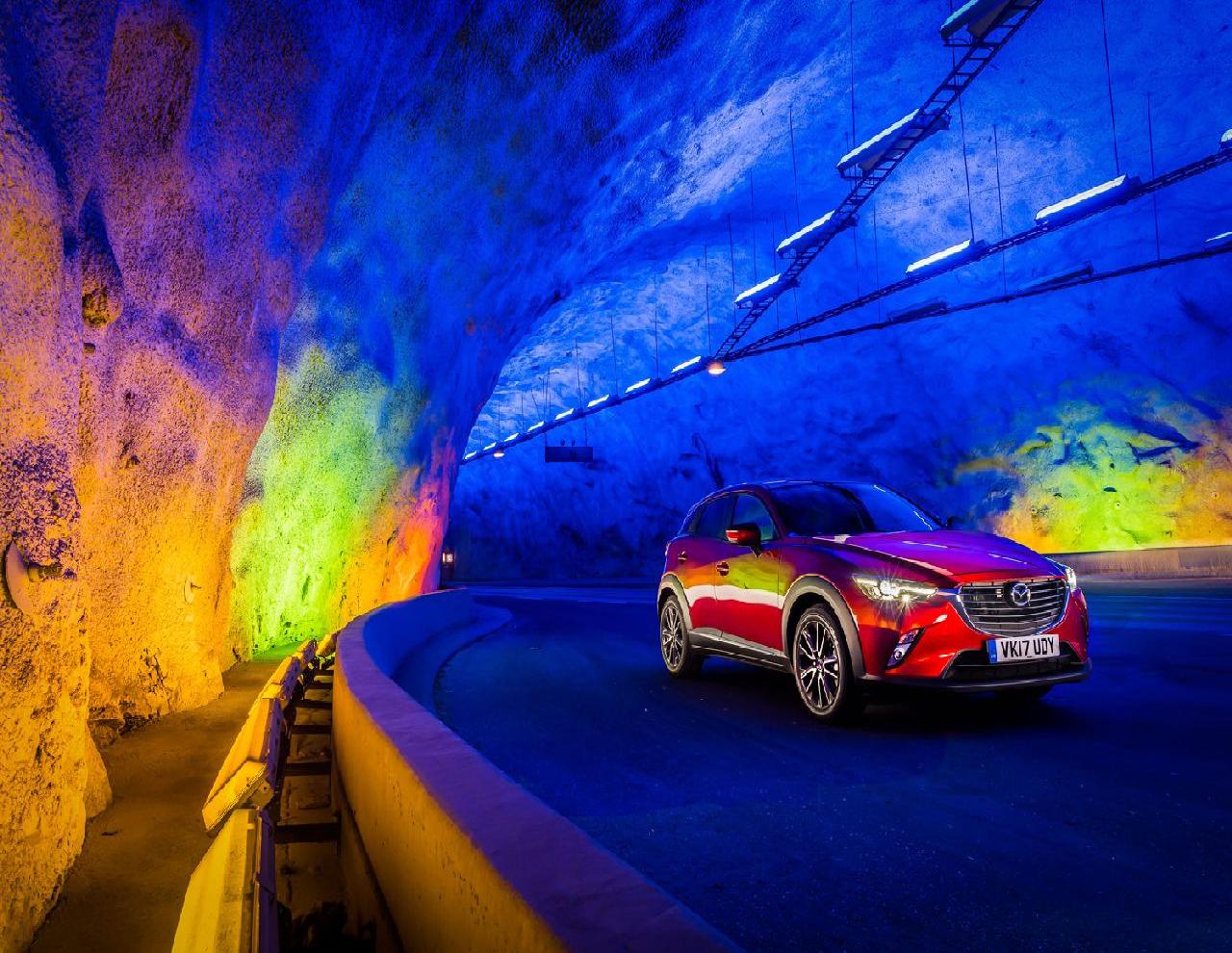 Finally, after 10 hours I arrived in Loen. Sure I was tired but it was only 4pm and the newly opened Hoven Skylift at Nordfjord was winking at me. A surprisingly stable cable car transported me from the fjord to the top of Mt. Hoven (1011 m) in only 5 minutes, and is one of the steepest cable cars in the world. The views are of course spectacular. Here’s a photo I took from the Hoven restaurant at the top. 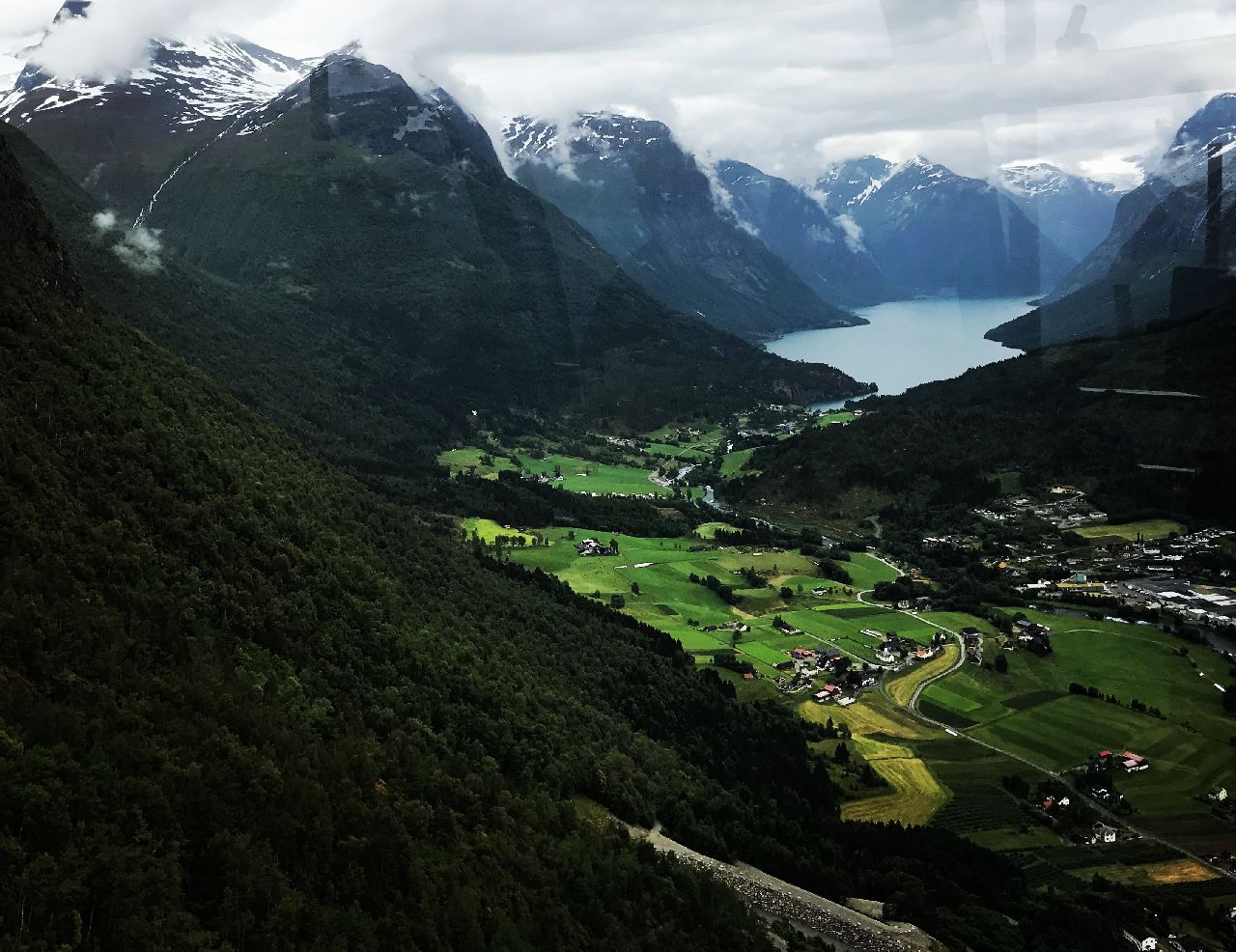 View over the fjord from Hoven

The next day I had to wake up before the birds at 4am knowing that I had an 11-hour drive to navigate. And I wanted to catch the 4.45am ferry so as not to get caught in campervan chaos. 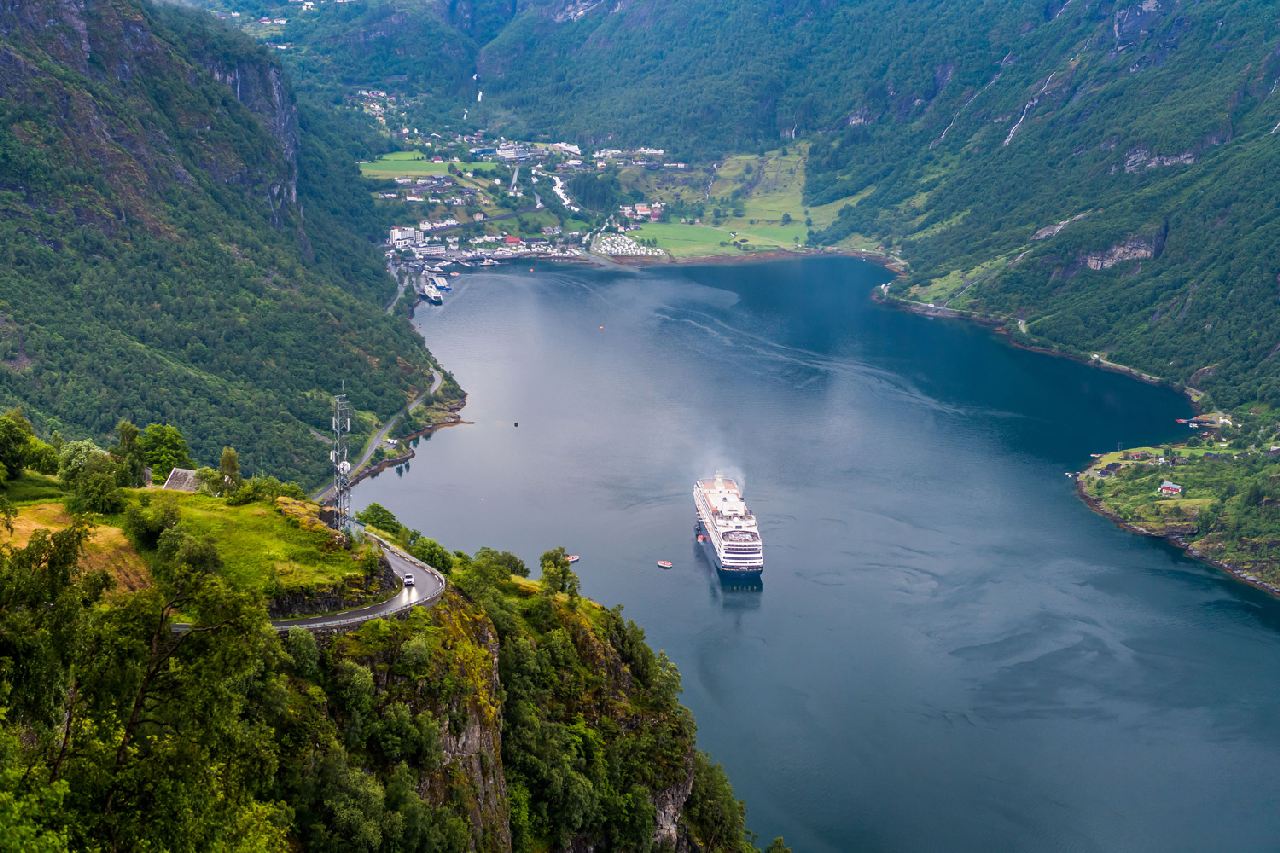 At this part of the route I also had to consider that the cruise ships land at the truly beautiful UNESCO protected Geirangerfjord port and once that happens, 2,000 or so tourists will beat a path, just like me, to Trollstigen for the ride of their life. I had to stay ahead.

The serpentine road that snakes its way down Trollstigen mountain which is part of the Interdalen valley is stunning. When I say stunning, what I actually mean is heart thumping, head spinning and nerve shattering. And more that that, there are waterfalls galore, streams everywhere and if that wasn’t enough water, it was raining. And foggy. And sensational. 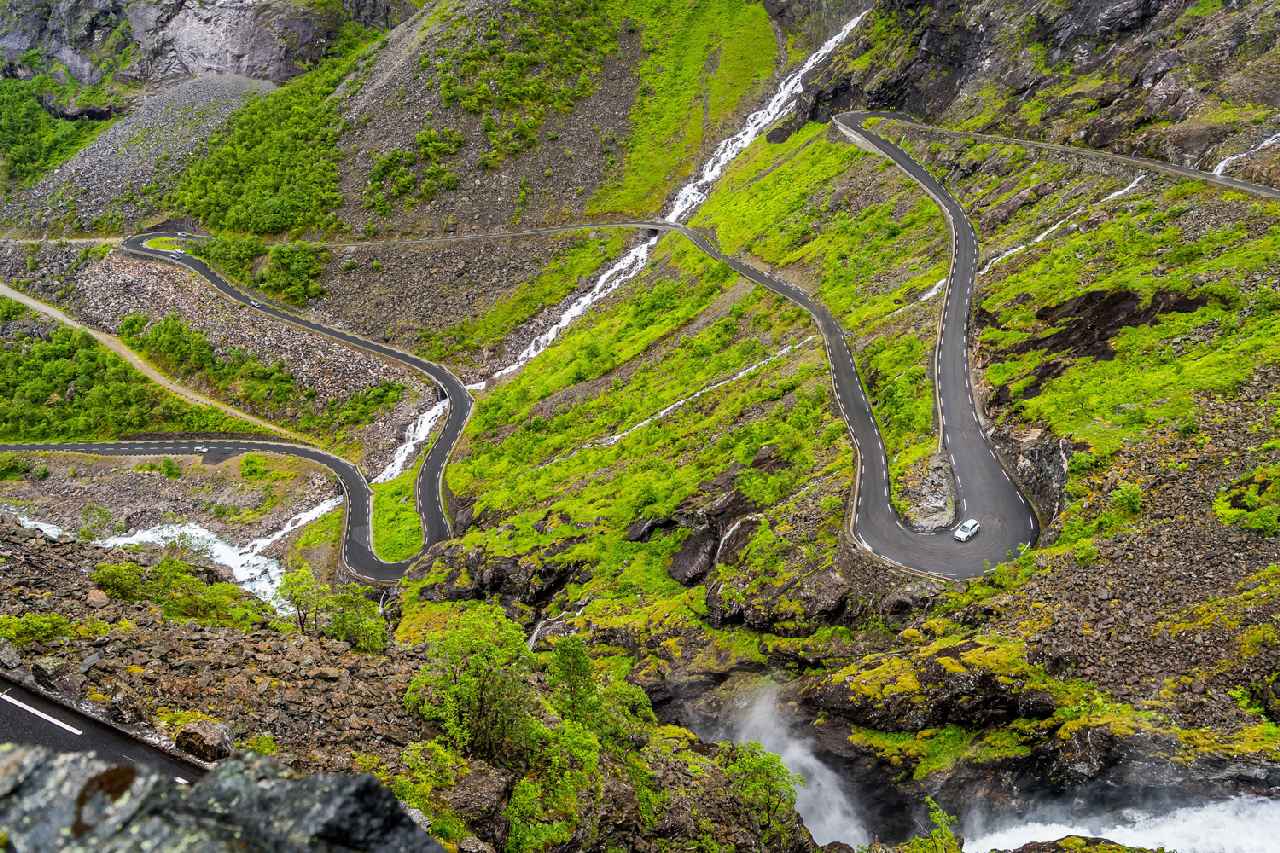 To calm nerves I stopped at the Troll cafe, where they sold – you guessed it anything troll related.

But there was more.

A little more driving and I got to the gorgeous Atlantic Highway. It connects Averøy with the mainland via a series of small islands and islets spanned by several viaducts and eight bridges over 8274 meters (just over five miles). 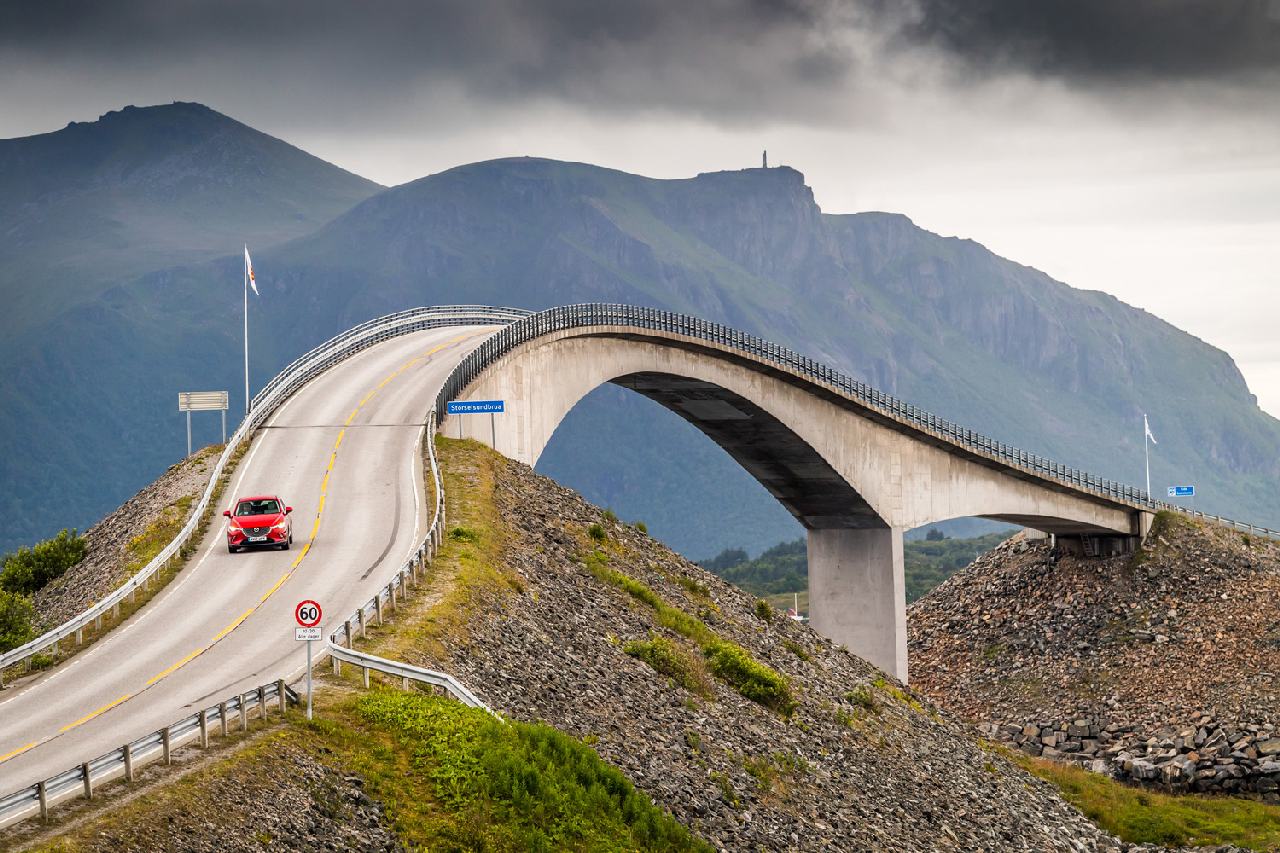 Driving over the spectacular Atlantic Bridge

And soon it was a big dip of 1,000ft below the Atlantic through one of the world’s deepest sea tunnels. I had to hand over 60kr (£6) for the privilege of another ear popping tunnel adventure and the dips and rises were measurable.

A few miles later and I’m in the city of Trondheim located on the Trondheim Fjord. It is a lovely harbour town with an impressive rose-hued cathedral and colourful clapperboard houses on stilts that stand on the harbour water. 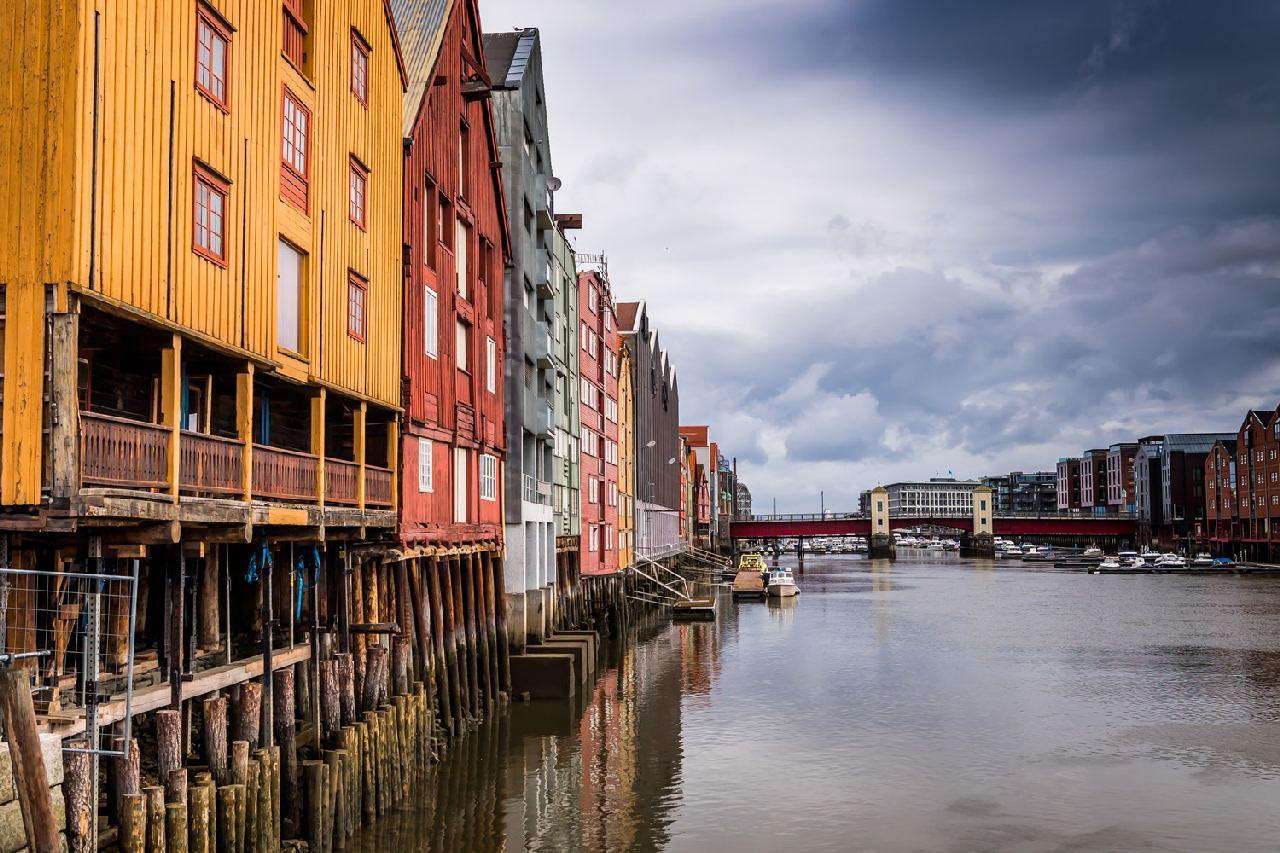 Clapperboard homes on the water

The city has plenty of bars and restaurants and by now I felt a well deserved a reassuringly expensive beer coming on.

You may also enjoy reading:

FLY: Direct flight from Luton to Stavanger. The return flight from Trondheim to Oslo then a connecting flight back to Luton.

STAY: In Stavanger and Trondheim I stayed in the Radisson Blu In Leon it was Hotel Alexandra

EAT: Dinner was taken at the hotels and breakfast was a pack taken from the hotel. Eateries on route were hard to find.