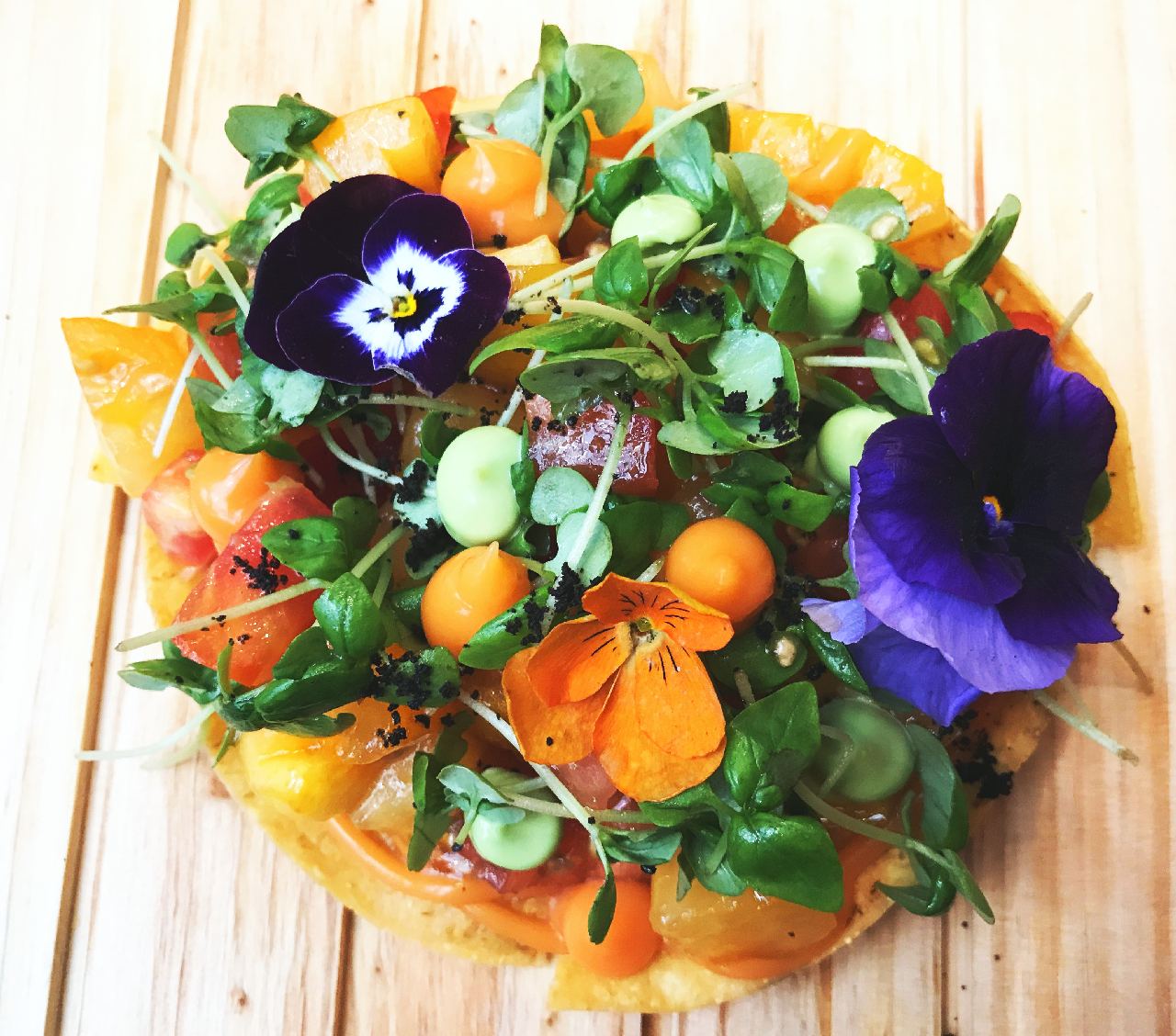 I had heard that Michelin Starred chef Eneko Atxa had opened a restaurant called “Eneko at One Aldwych” – One Aldwych hotel. So, when I booked a table I was expecting nothing less than fine dining or more specifically fine Basque Country based bottomless brunching from Eneko.

Here’s why: the Basque Country is in the North of Spain near the Bay of Biscay and in South Western France. Grains and grapes are grown easily and the area has developed a rich culinary heritage. In fact, within this one region there are almost 40 Michelin starred restaurants. Eneko Atxa has one of them, the Azurmendi Restaurant in the town of Larrabetzu, and he has brought his culinary expertise to London.

So, it was 12.30pm, a perfect time for brunch, and I was seated on comfy red leather upholstered seating, pleasant ambient jazzy music in the background and before me lay a menu of five courses.

Mineral water was served immediately and drink orders were taken – Cava and red wine were our choices and we could have as much as we wanted for two hours.

Then came the food entertainment. I use that word deliberately because the visuals were indeed entertaining.

The first was Eneko’s take on the Traditional Talo. It was by any standards, a beautiful work of art served on a wooden board.

Corn flour bread is a staple of Basque cuisine, but here it was flash fried and served as a crispy base to a melange of heritage tomatoes with basil emulsion and decorated with summer flowers. I swear I could actually taste the sunshine that ripened the tomatoes.

The second was the Cerdito Callente. The menu describes it as a “hot dog” but it looks more like burger. The meat is Iberico ham with mushroom durrelle served in a Basque muffin. 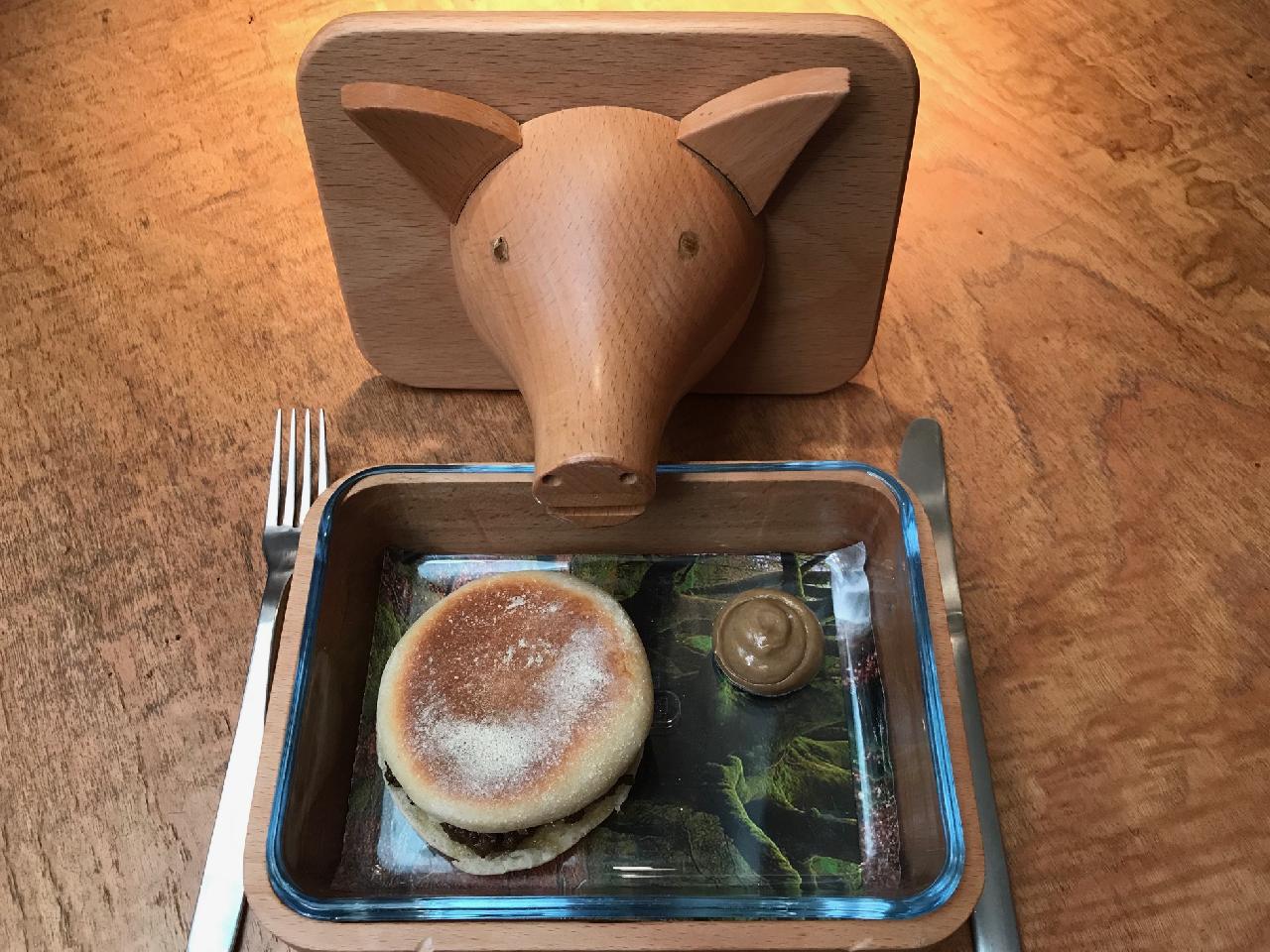 It was served with a huge sense of humour in a pig head shaped wooden box. In any case there was nothing funny about the flavour; juicy melt-in-the-mouth meat tinged with mushroom and a curl of mushroom puree to dip it into. Quite delicious.

Then the Egg Yolk Tempura arrived. Deep friend battered eggs yolks are served on a bed of velvety creamed potato. An unusual combo made sweeter by the confit of vegetables. 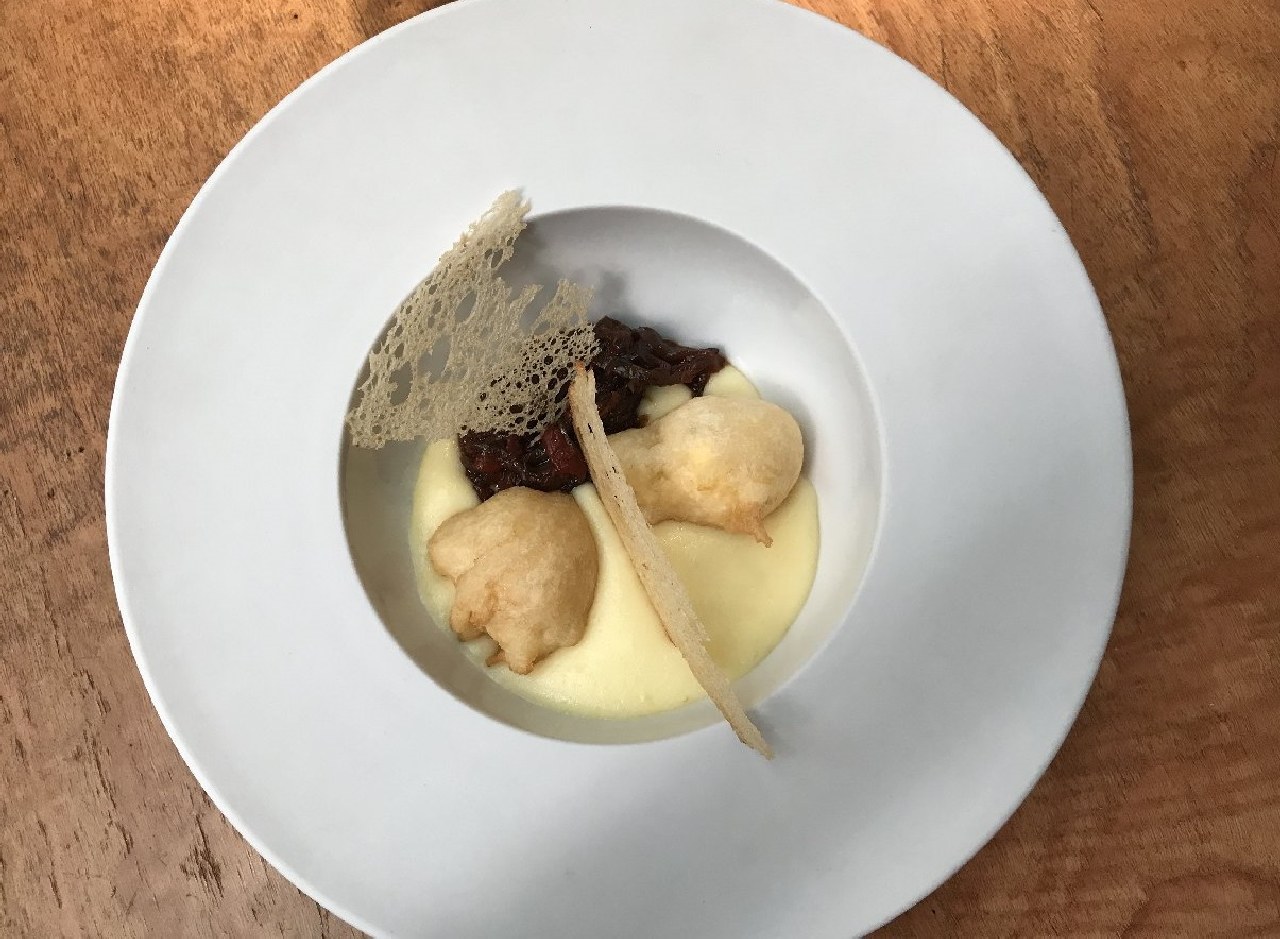 For the main course you get to choose something from the Asador (A Spanish word meaning barbecue, grill or spit) charcoal-style grill. I chose the monkfish cooked with garlic and parsley and my co-bruncher chose the duck breast with the sweetest Gernia peppers. 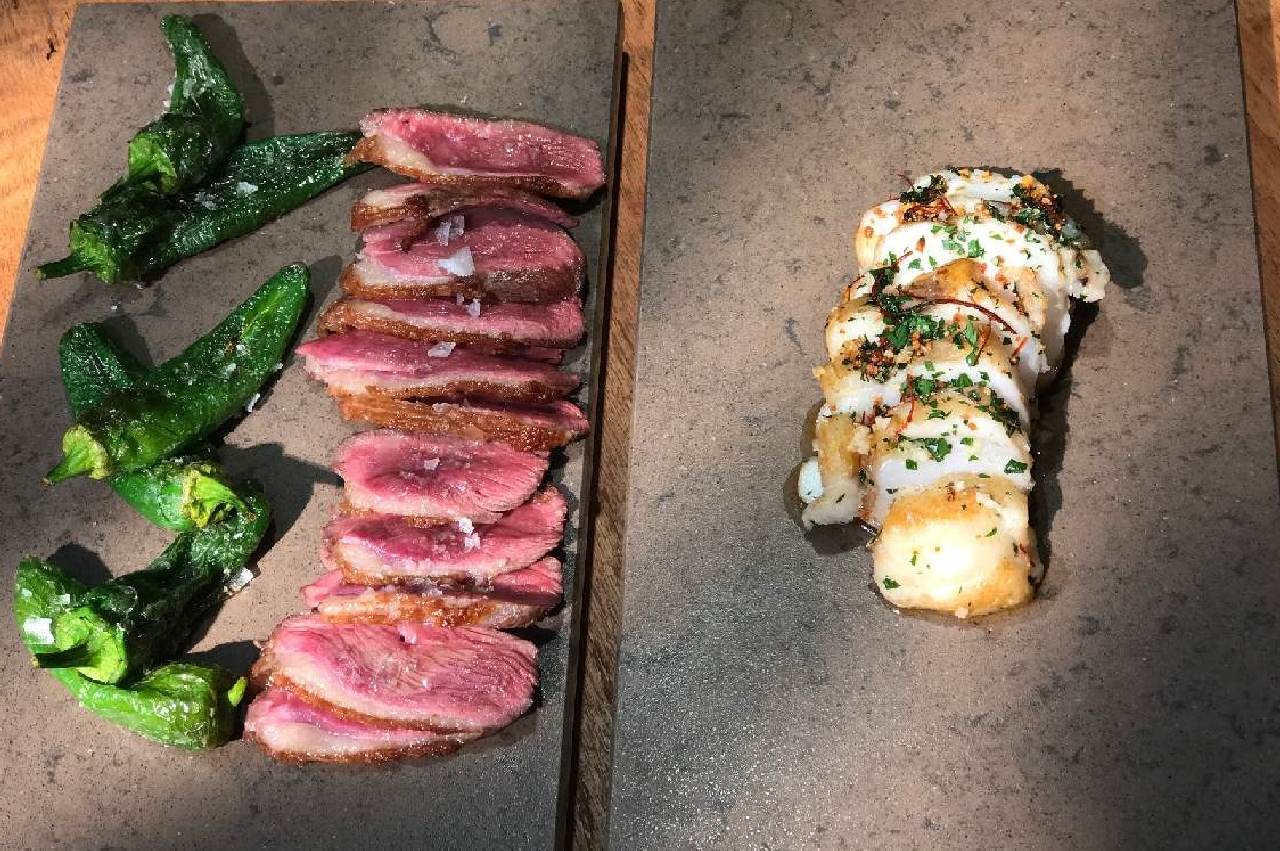 Duck and monkfish from the grill

We could have chosen the typically Basque offering of Txuleta which is an organic rib of beef from the Rhug Estate – it is grilled, sprinkled with sea salt and served with a spring onion salad – but perhaps next time. These dishes are served with haystack fried potatoes (or, if you like, call them chips).

There was a dessert on the menu too, a Torrija. This is a typical Basque sponge cake served with caramel crumble icecream. Though it was pleasant enough, I couldn’t do more than taste it as I had no more capacity left.

Of course, no bottomless brunch could be named so if there was no alcohol. The options were Cava, a Spanish red or white wine, a bloody Mary or a Kallimotxo. The latter is a traditional Basque cocktail made with red wine and cola. And you can drink as much as you want during the two-hour brunch. And I did.

Verdict: This is a pretty stylish bottomless brunch and I wager a bet that it’s probably the best in London.

Getting there: The nearest tube station is Charing Cross. Busses 6 and 9 stop nearby. Eneko at One Aldwych, One Aldwych, London WC2B 4BZ