Think of a skyscraping skyline and you may not immediately think of Chicago. Located on Lake Michigan, the famously dubbed Windy City is, in fact, the birthplace of the skyscraper – the first was built here in 1885 – and today its skyline is believed to be among the world’s tallest and densest.

It all started with the Great Chicago Fire of 1871. It levelled the Windy City leaving only a few buildings, such as the Chicago Water Tower on Michigan Avenue, still standing. It became a symbol for a city determined to rebuild something innovative. 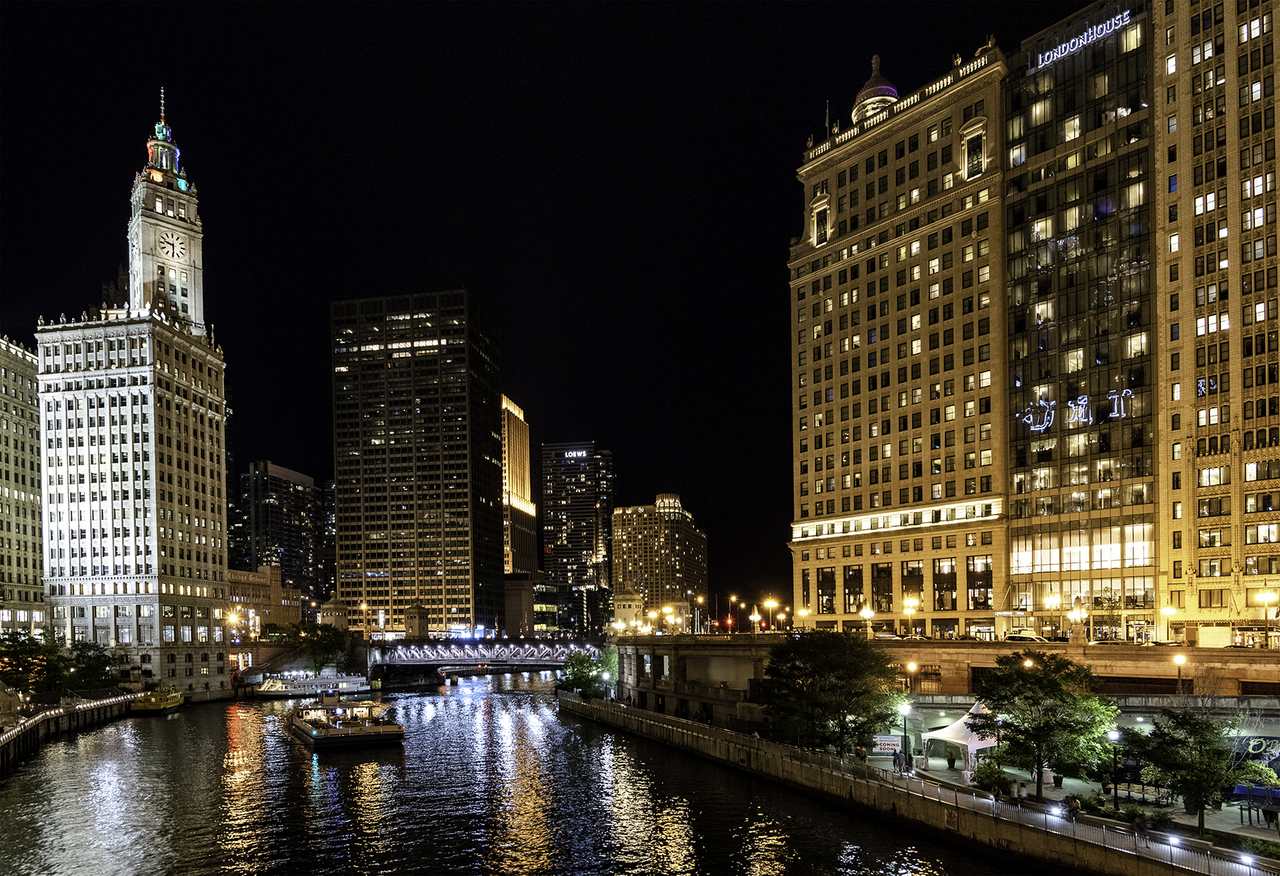 Chicago’s skyline is the tallest and densest in the world

This created an opportunity for architects to try new and innovative ideas to rebuild the city. “The Chicago School” was a group of architects who enthusiastically promoted load bearing masonry and steel frame construction for the new buildings and some of these are truly incredible pieces of architecture.

This is a whirlwind tour an amazing collection of buildings that form a concrete and steel canyon within just four square miles.

Walk along Riverwalk for a mile and a quarter by the blue-green waters of the Chicago River from Lakeshore Drive and Lake Street not forgetting to look up even though you may find yourself straining your neck to look upwards.

Even the bridges across the river are stylish and made of riveted steel painted a dull red some with stone bridge towers.

One of the first iconic structures of Chicago is “The Friendly Confines”. Wrigley Field is on the Northside of the city and was built in 1914. It was named after the chewing gum king William Wrigley in 1927.

I walked around the area outside of the ballpark called Wrigleyville. The neighbourhood and ballpark seemed joined together to give a unique baseball experience. Rooftop bleachers crown several buildings behind the outfield fence. Peanut and T-shirt vendors are on nearly every corner. Statues of Cubs legends like Ernie Banks, Ron Santo and Harry Caray dot the exterior. The famous red Wrigley Field sign sits above the home plate entrance announcing today’s game.

I watched the Cubs play the Atlanta Braves. The royal blue sky against the emerald green field and the ivy-covered bricks of the outfield wall made the Chicago style hotdog I was eating even better.

The beauty and functionality of this steel-framed venue has allowed it to survive and become the second-oldest Major League Baseball park in the United States. I liked it better than Fenway in Boston.

The Milestone Mile (and shopping at Michigan Avenue)

A building boom started in 1920 with the revolutionary, double-decked steel DuSable Bridge over the river at Michigan Avenue. It has huge bridge towers of Bedford stone that are carved with historical scenes. The bridge serves as a Beaux-Arts style gateway to The Magnificent Mile of stores along Michigan Avenue.

Rising high is The Wrigley Building (Spanish Colonial Revival),  the London Guarantee & Accident Building (Beaux-Arts), the Chicago Tribune Tower (Gothic Revival) and the Art Deco structures of the Carbide and Carbon building with its gold leaf adornments and the skyscraper at 333 N. Michigan.

Michigan Avenue runs North from the bridge and allows you to shop some of the famous stores along the first “Magnificent” mile where you can shop at Bloomingdales, Marshalls, Neiman Marcus, Tiffany’s, Disney, Nike, are just a few.

The view at John Hancock Center

The crenellated Water Tower sits across the avenue from the dark exterior of the huge John Hancock Center with its 360 Chicago observation deck a thousand feet above the street.

Next door is a multi-story mall called Water Tower Place that has a Macy’s and a very cool Lego store that has a display of the Chicago skyline created out of Legos in its front window.

TIP: There’s a Harry Caray restaurant on the seventh floor though the original Harry Carays on Kinzie Street with its white-jacketed waiters, memorabilia, and Frank Nitti cellar is a more genuine Chicago experience. 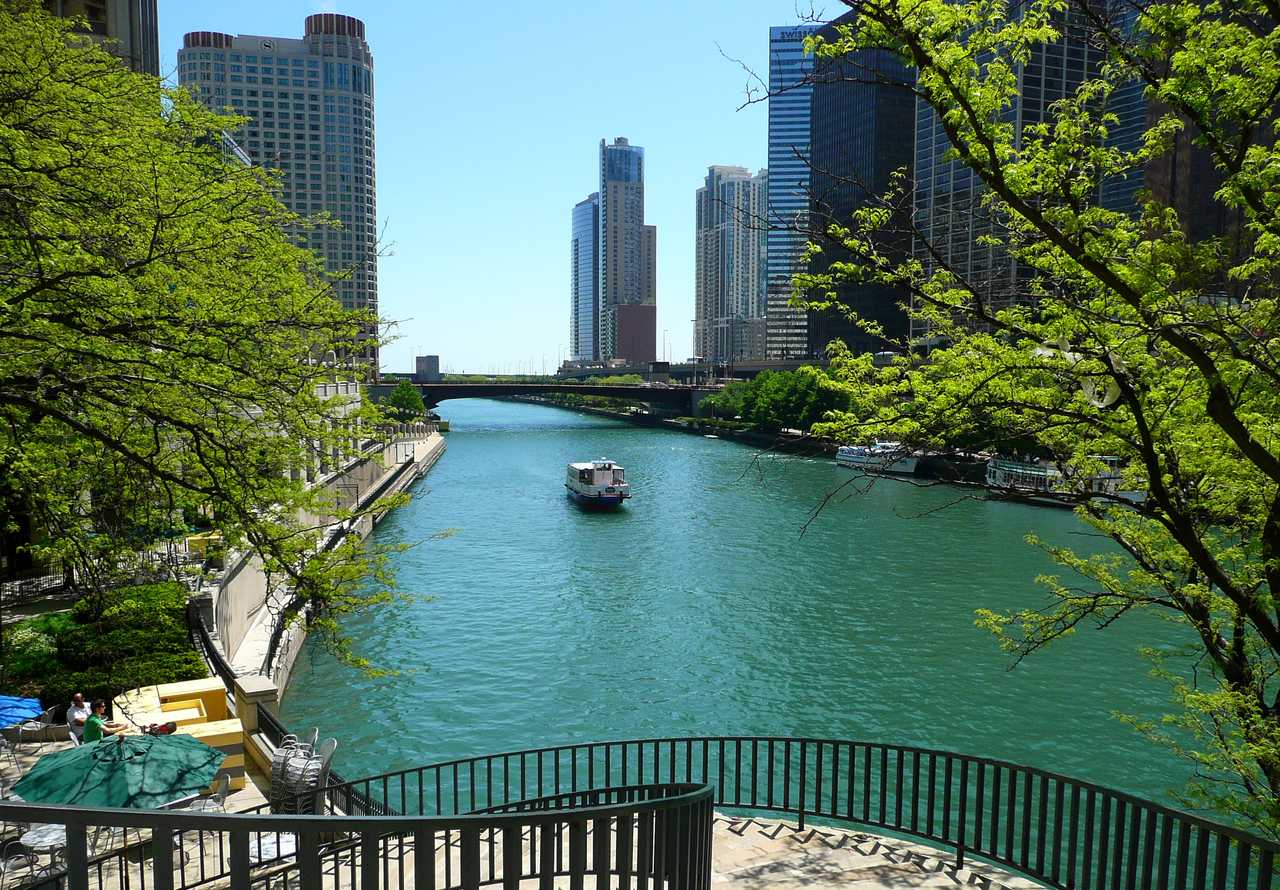 The Chicago River Architectural boat tour cruises past the Merchandise Mart which was the largest building in the world when it was built in 1930. Its four million square feet along the river covers more than two city blocks within its Art Deco walls.

A more modern “Chicago School” of architects built the first steel and glass towers along Lake Shore drive by 1951. I saw examples of this new Mid-Century Modern style with buildings like the twin circular towers of Marina City. It was built in 1967 and in addition to residential space, it included an office building, a theatre, gym, swimming pool, ice rink, bowling alley, bars and restaurants as well covered a marina for your boat.

The river changes from green to brown as the tour boat turns into the south branch of the river due to Lake Michigan which flows into the Chicago River carrying its green algae along with it.

Chicago rerouted the waters of the Chicago River to create this reverse flow of water to help clean its polluted waterway and protect the drinking water of Lake Michigan. The river is now a source of pride and beauty.

333 West Wacker sits at the “T” of the river and its huge curved green glass exterior reflects the other skyscrapers around it creating a mirror of the city. An “El” train, the famous elevated mass transit of Chicago, rolls over a bridge spanning the river beneath it.

This was the first Post-Modern style building which combined the simplicity of the International style with an elegance that changes as the sun and clouds shift during the day. “The Tuning Fork” building at 150 North Riverside, with its narrow-sculpted base that uses only 25% of its lot, glided by as we headed south.

The view to the north is of the symbol of Chicago, the tallest building in the world for nearly 25 years – The Willis Tower. It soars 1450 feet and 100 stories into the Illinois sky. In 1973, it was called the Sears Tower and housed the headquarters of the world’s largest retailer, Sears Roebuck and Company. This post-modern building has a 105-foot cylinder, surrounded by four other smaller cylinders on its roof resemble a crown, especially at night when it illuminated by over a thousand fluorescent lights.

The Willis Tower along with the John Hancock Center marks the start of the ultra-high skyscraper movement. The innovative use of the bundled tube steel construction method allowed the “Second Chicago School’ architects and engineers to address structural problems and wind resistance that had not been encountered at lower heights.

Check out the view from the Navy Pier 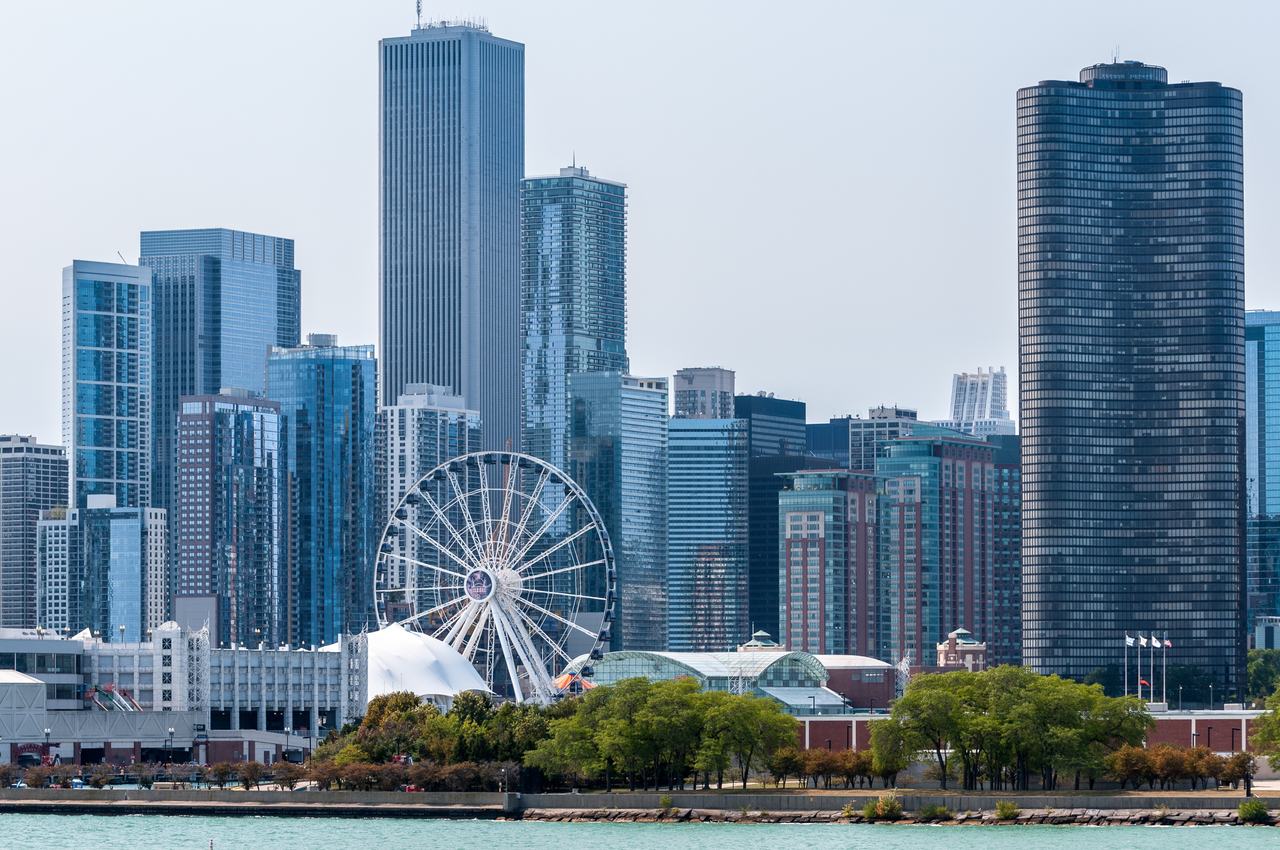 The view from Navy Pier

For a spectacular panoramic view of the Chicago skyline and some of the tallest buildings in the world – six are over 1000 feet high – head to the Navy Pier. Included in the mix is the second tallest Trump International Tower and the new number three contender that is under construction, The Vista Tower which will rise to 1,191 feet taking over third place from its neighbour the Aon Center.

I finished my tour in Chicago by feasting on seafood at Shaw’s Crab House and enjoying the sounds of Chicago at Andy’s Jazz Club just down the street.  I had always pictured Chicago as being old and crime-ridden. However, my 48 hours here left me with the feeling that Chicago is just beginning to rise to greater heights just like its buildings.

Stay at the Sheraton Grand Hotel 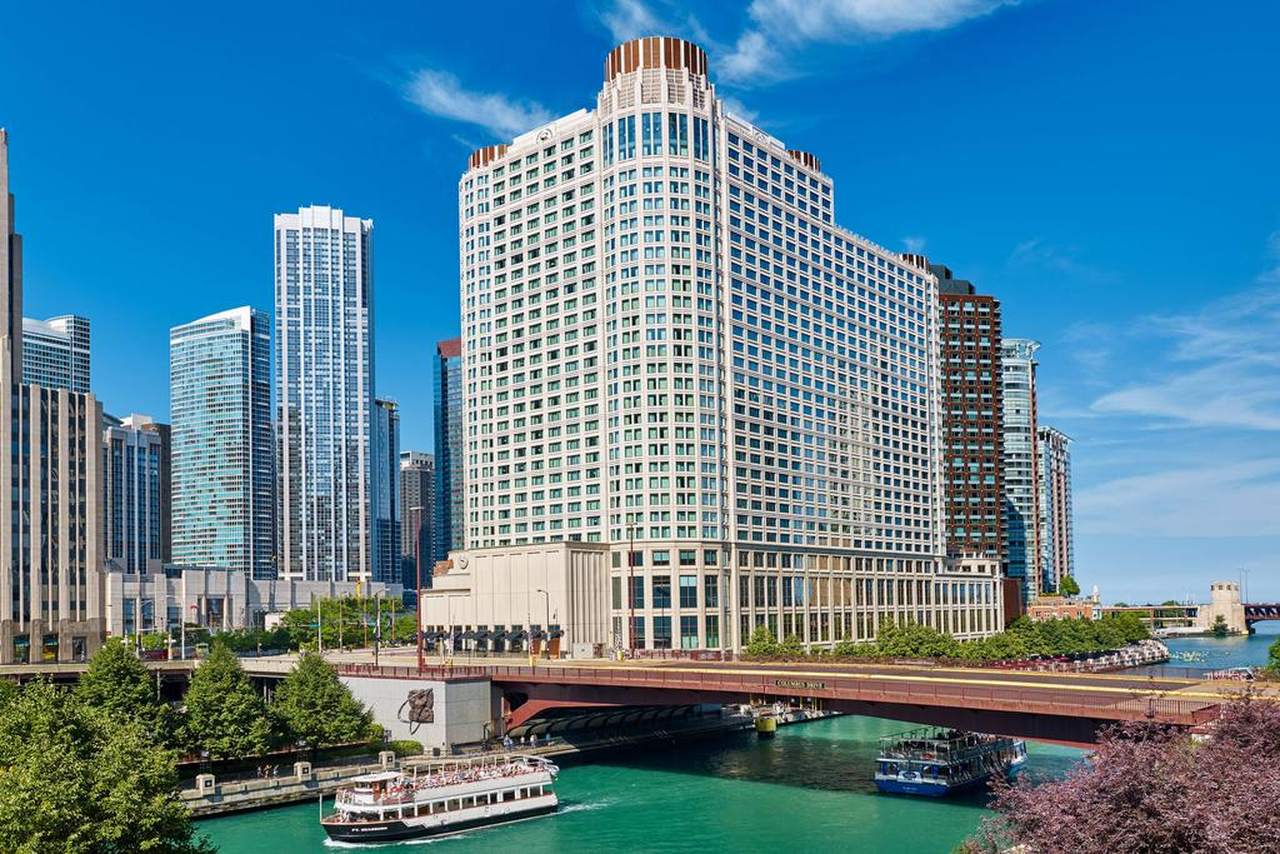 The Sheraton Grand Hotel has a great location right on the Chicago Riverwalk, Water Street and Columbus Avenue. It has rooms overlooking the river and lovely city skyline and is within walking distance of just about everything including Navy Pier.

The Edge Hudson Yards, the highest view of New York City opens in 2020

Jim Chamberlain is a 59 year old, award winning photographer from Lacey, Washington. He has been an amateur photographer most of his life since he first borrowed his father's 35mm camera at age 15. He still has that camera. Jim decided to pursue a second career as a professional photographer upon his retirement from law enforcement in 2011. Jim uses Nikon cameras and lenses and does both digital and film work. He generally uses a Nikon D300s digital camera and a Pentax 67II medium format film camera for larger work. He specializes in landscapes and nature photography with a love of black and white images. Jim loves to travel with his wife, and his camera accompanies them on their adventures to Europe, Alaska, Arizona, Canada and in their home state of Washington.