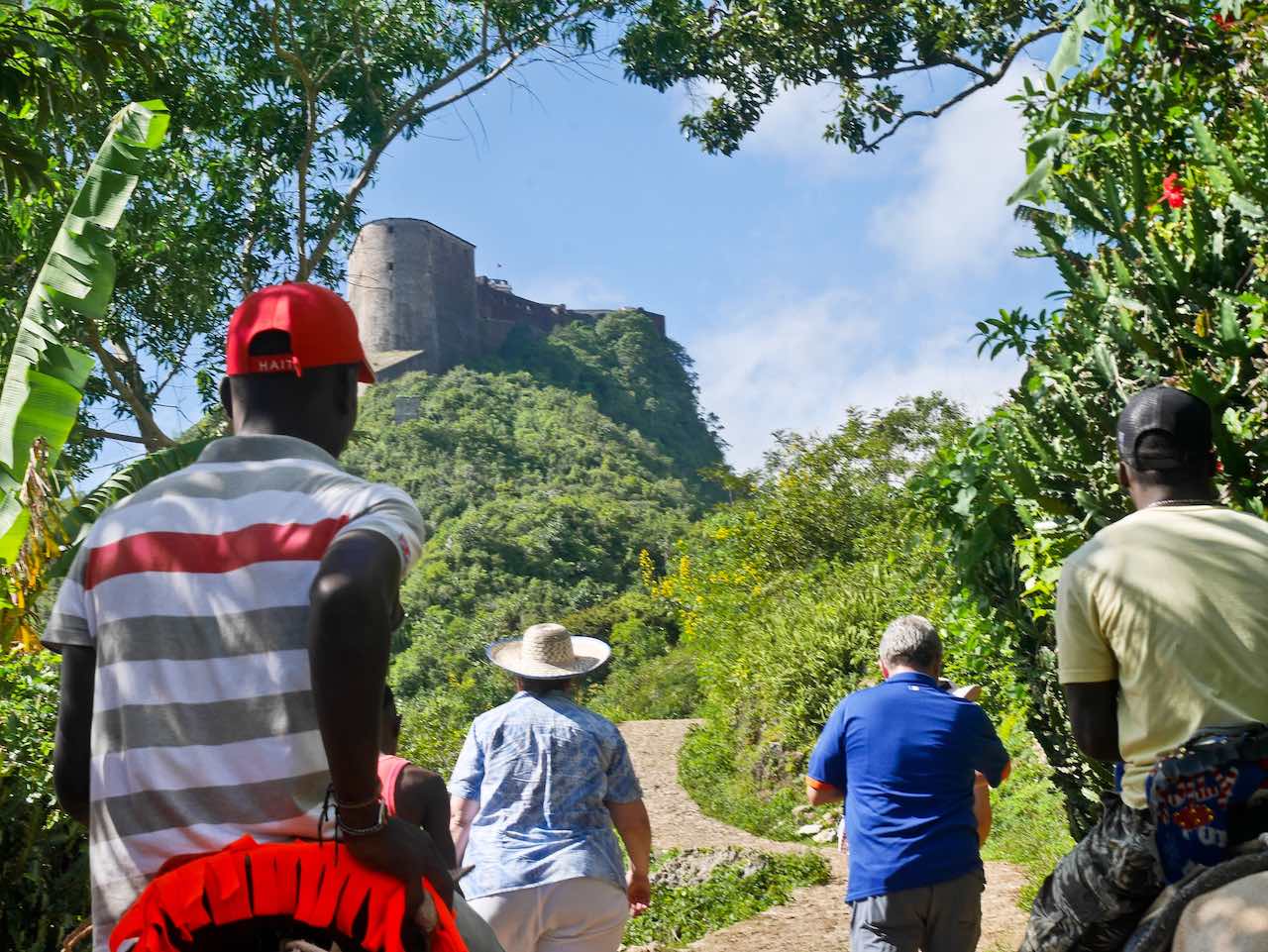 Haiti occupies around a third of Hispaniola, the second largest island in the Caribbean, sharing it with the prosperous Dominican Republic. Earthquakes, ruthless dictators, death squads and zombies are just some of the reasons that the country hasn’t quite made it onto the tourist map.

As a result it retains a unique culture, almost a different continent, with a glorious coastline, the largest fortress in the Americas and the vibrant capital of Port au Prince, completely recovered from the 2010 earthquake.

For me that was enough reason to visit.

I leave Dajabón in the Dominican Republic and cross the Massacre River to Ouanaminthe in Haiti, on the other side. It’s chaotic as it’s market day here – Haitians grabbing a bargain on the DR side, queues of ramshackle pickups piled high with sacks of rice, chickens and chairs on the bridge. I keep my hand on my wallet and hang on to my belongings. Fortunately I have a guide who helps me with the formalities and smooths my crossing. 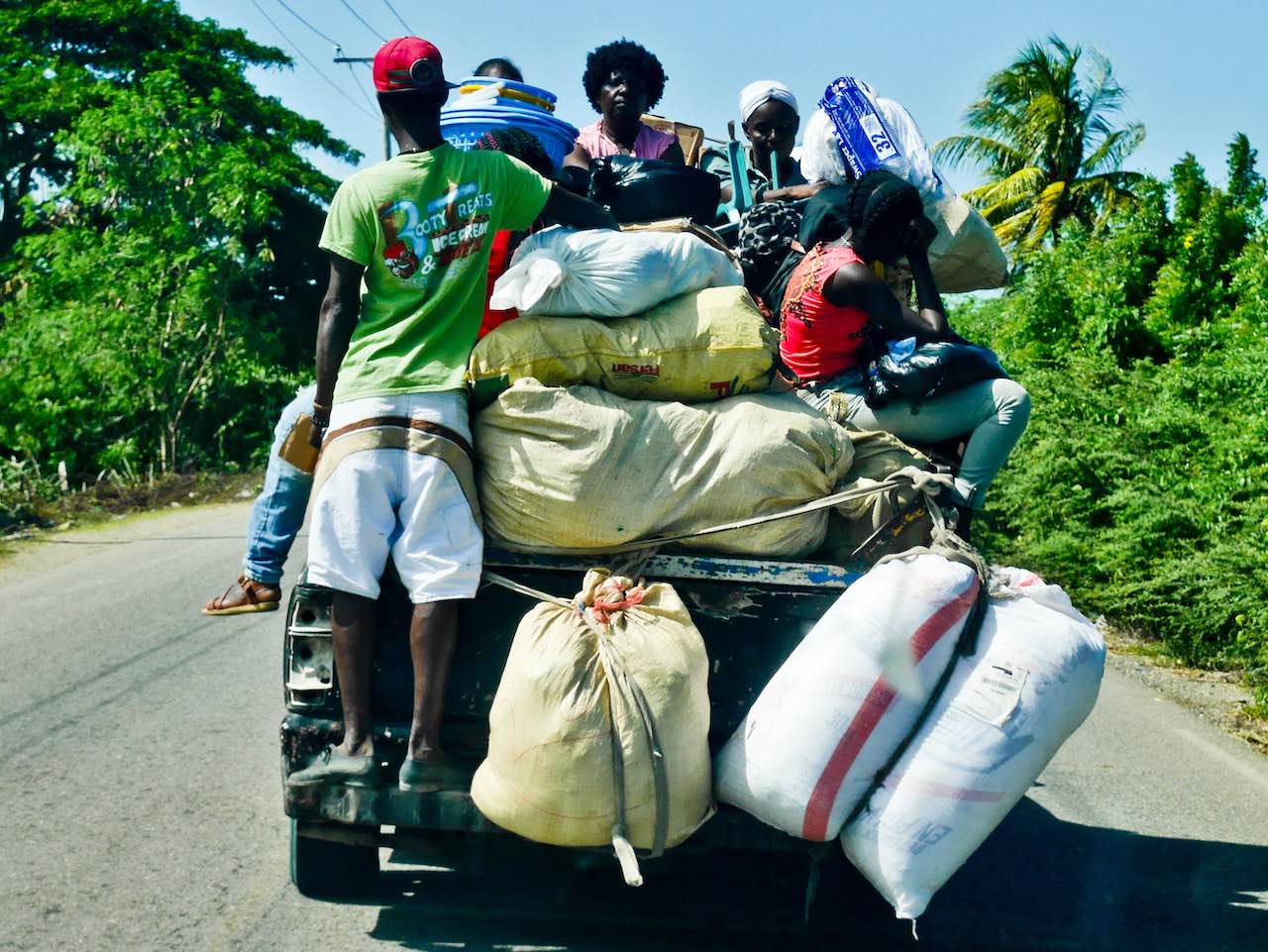 Compared to the Dominican Republic, it’s like going back in time. The 90-minute drive North West passes through flatlands, populated by sparse shrub, with bags of charcoal by the side of the road. I can’t believe the number of makeshift wooden shacks running their own private lotteries, and there are certainly more of them than the small stalls selling baskets of fruit. 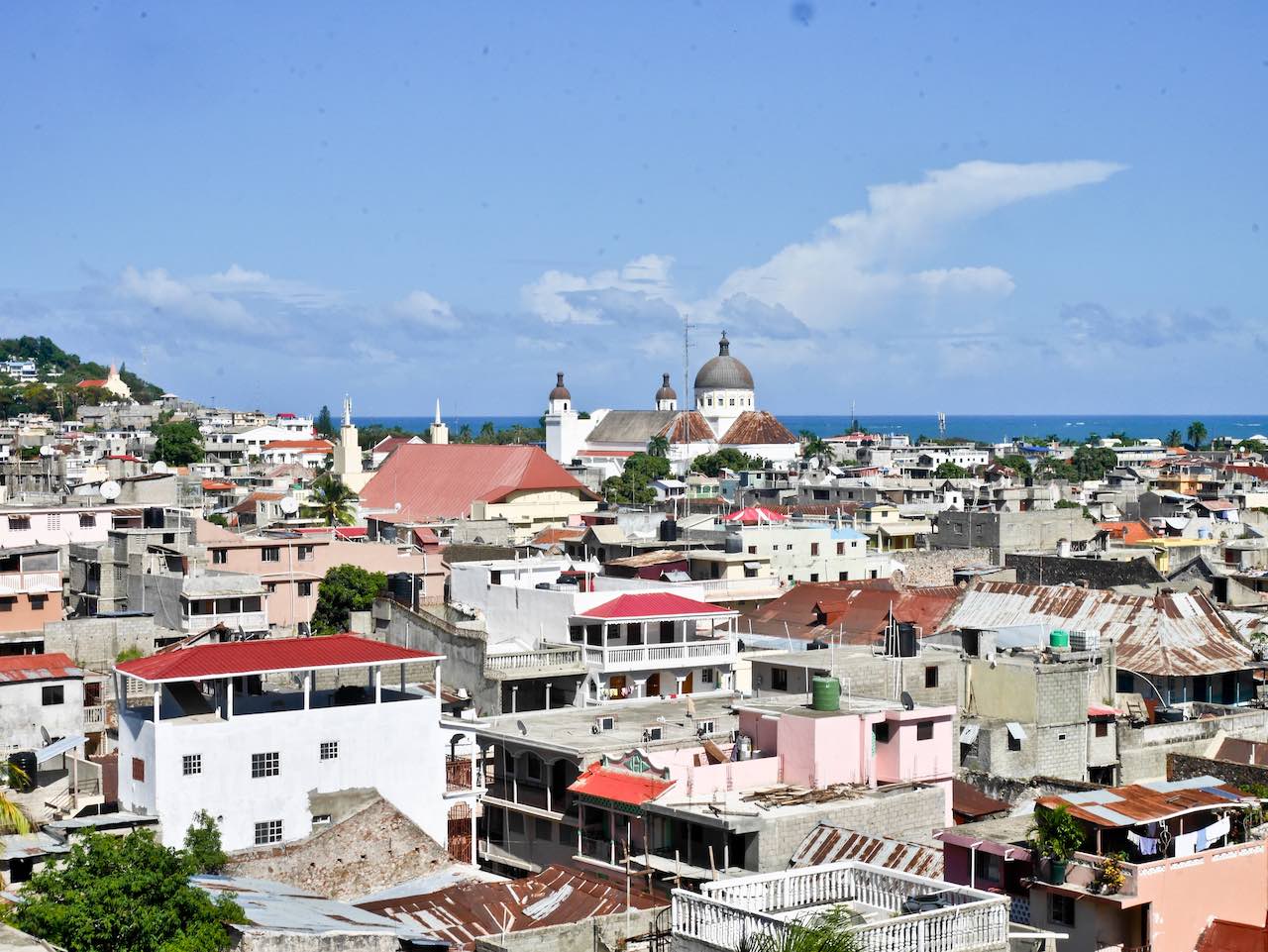 I’m soon by the sea in Cap-Haitien, originally Cap-Francais, and the second largest city in Haiti. Apart from the plastic garbage littering the beach, it’s an attractive place, stuffed with colourful late 19th century buildings, all balconies and tall shuttered doors in the colonial style. Motorbike taxis ply the narrow streets and kids, in their impressive starched uniforms, are just leaving school.

The Place d’Armes, the main square, has the Cathédrale Notre Dame on one side and the Hotel de Ville on the other. The Roi Christophe University is in one corner and students are eating their lunch, under the statue of Jean-Jacques Dessalines, the hero of the Haitian Revolution. There’s also a memorial to the slave leaders who were executed by the French here in the 18th century. 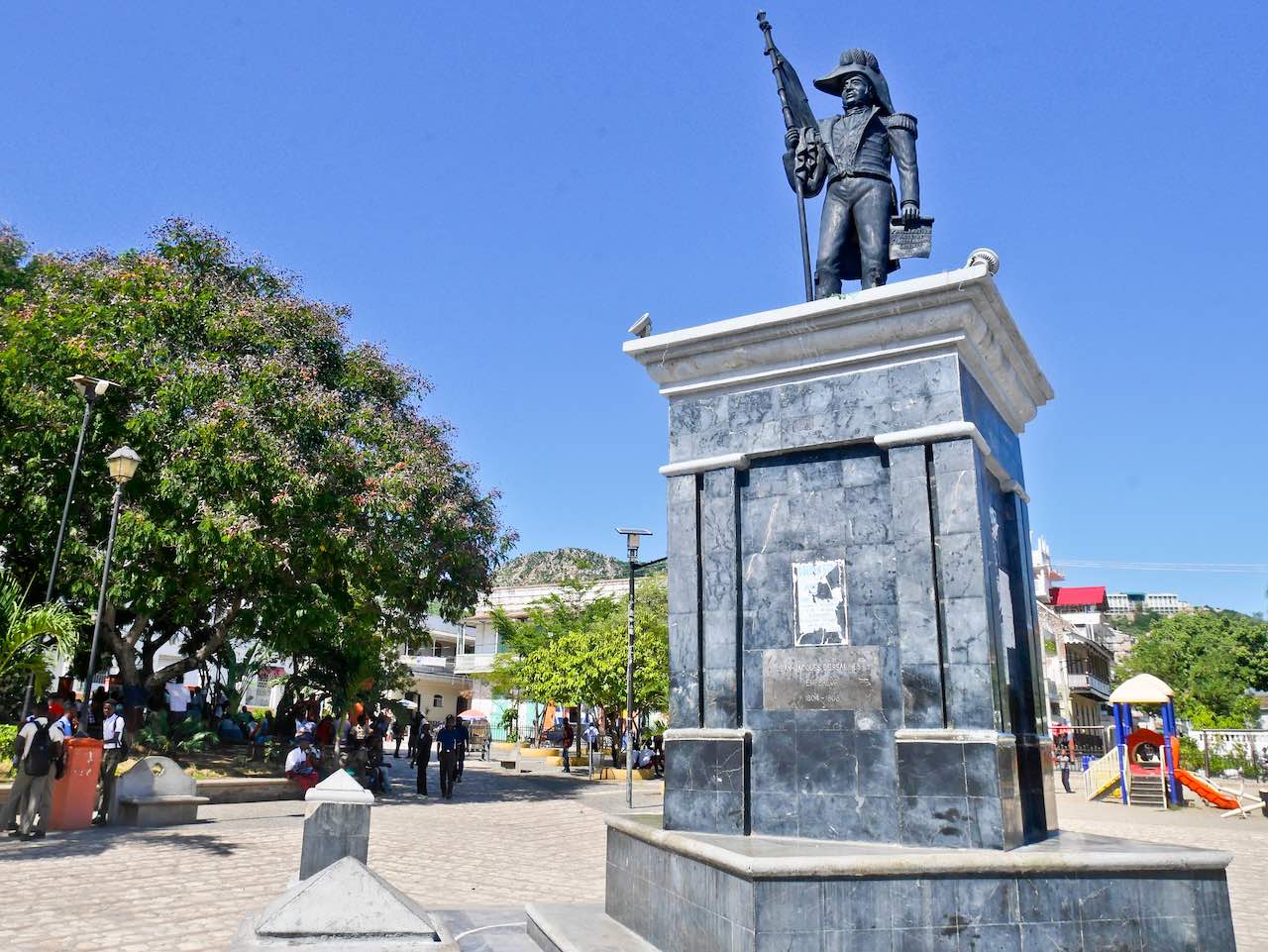 As I take the coast road out of town, alongside a deeply turquoise sea, I reflect that this has the potential to be one of the world’s great destinations. Security is still a potential problem and the beach needs a clean but it’s a beautiful spot. Cormier Plage, an attractive seafront hotel, has belonged to the same French family for a couple of generations and it makes a good base to explore further.

Next day, I set out for the UNESCO World Heritage Site of the Royal Palace and Citadelle in Milot, around 30km inland. We climb gradually through lush tropical vegetation, on a narrow road which abruptly comes to an end. In front of me are the impressive ruins of the San-Souci Palace, destroyed by an earthquake in 1842. 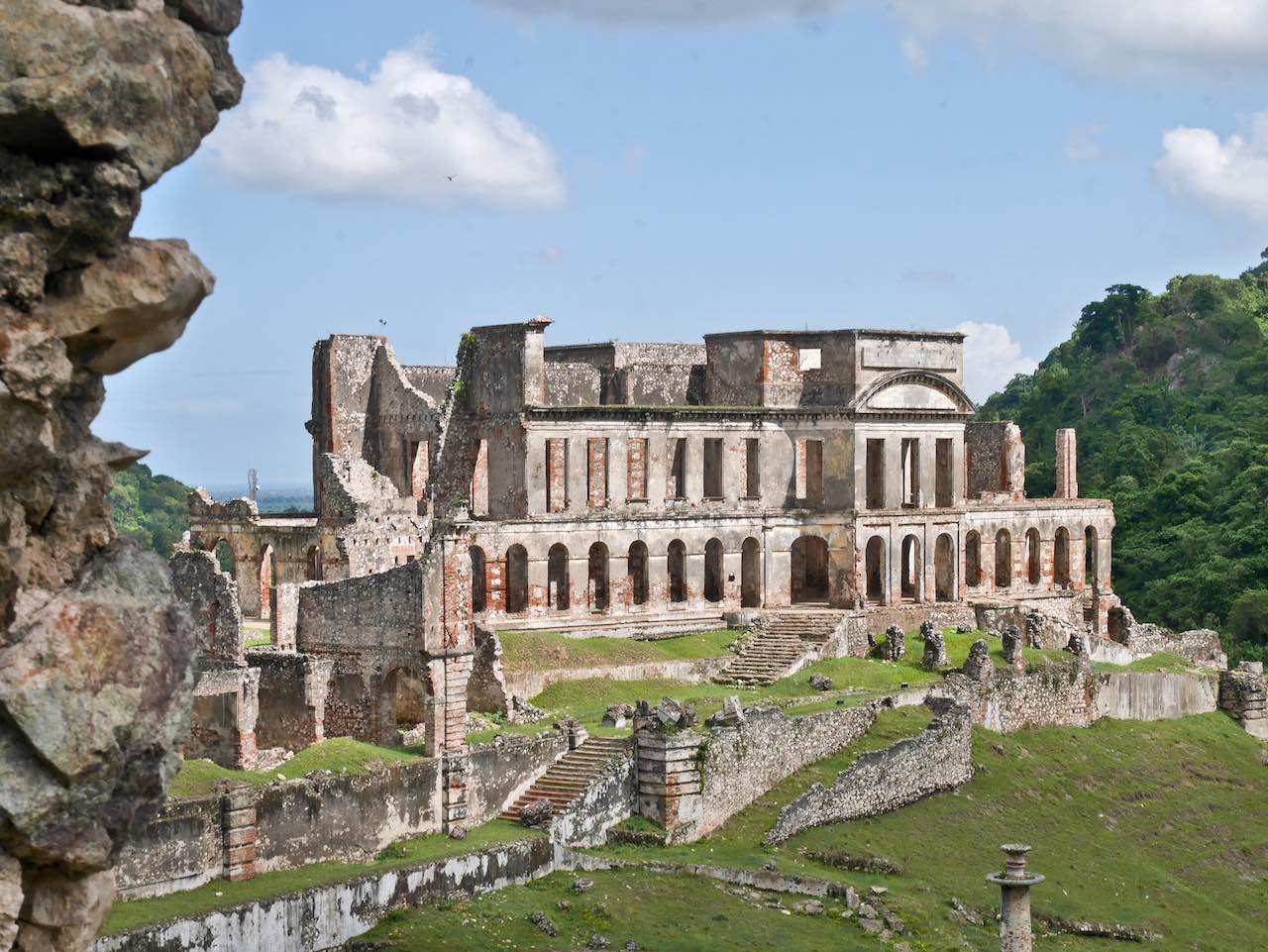 Henri Christophe, King of North Haiti, built this palace between 1810 and 1813 and it was designed to impress. He wanted to show foreigners that black people were as civilised as whites. It all ended badly, as the King committed suicide in 1820, after suffering a stroke, with his enemies approaching. The palace lay empty until the 1842 earthquake finished it off.

A grand staircase, once flanked by bronze lions, leads inside, and there are a series of banqueting halls, private apartments and even a throne room. Unfortunately the walls have been reduced to bare brick and it’s impossible to tell what was what. The grounds once contained extensive gardens with a large pool and the hospital is now a school. The adjacent church, where Henri was crowned, survived the earthquake, although the dome has had to be rebuilt. It’s one of the oldest in the country, dating from 1804.

Henri’s greatest achievement, though is his Citadelle, perched on top of the mountain and inaccessible by car. There are horses for hire but I choose to walk the mile uphill and enjoy the stunning views. The fortress is hidden for most of the way, until suddenly the fortress walls, rising 40m from the rock, rise up in front of you. It took 20,000 workers 15 years to build and was part of a chain of fortifications to protect the newly independent Haiti from the French. 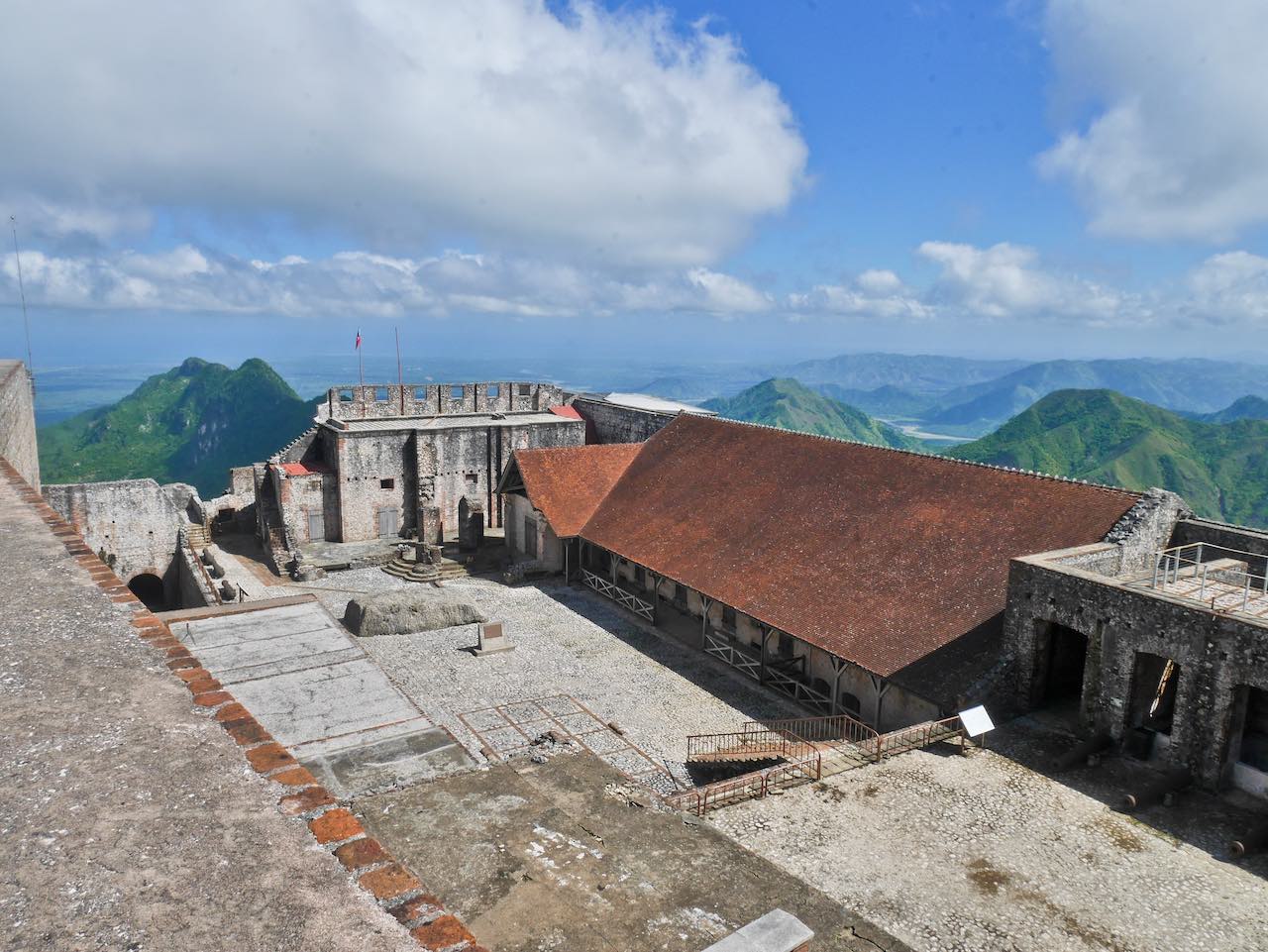 Apparently, it’s the largest fortress in the Americas but was never tested in battle. Originally it was fitted with 355 cannons, stolen from the French, and over 150 still remain, along with 50,000 cannon balls. It’s the world’s largest collection of 18th century cannons and includes some British cannons, marked with the crest of the Duke of Marlborough. 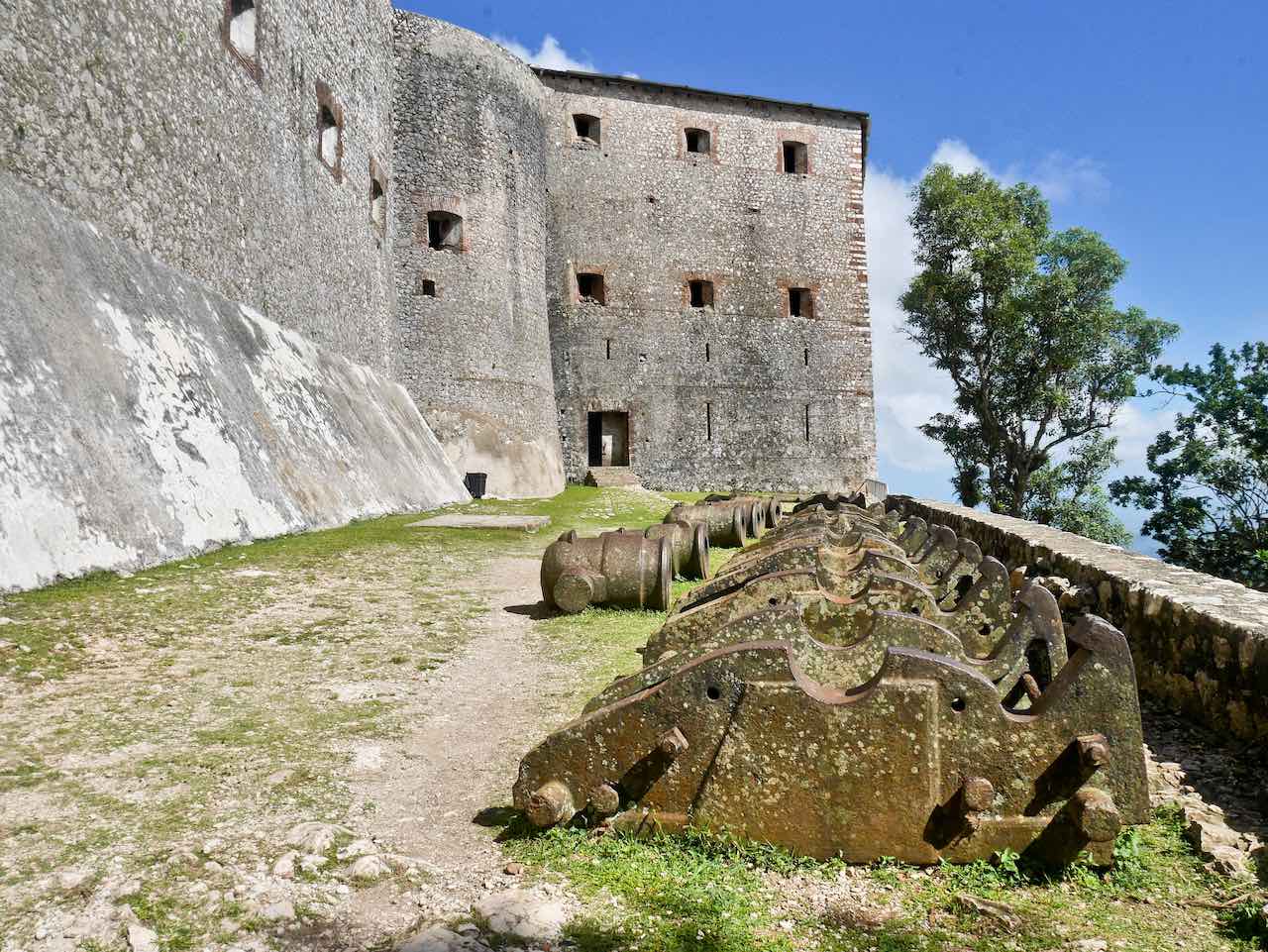 You enter through a drawbridge into a network of large cisterns and storehouses, designed to provide a year’s food and water for 5000 soldiers. There are palace quarters for the king and his family and of course extensive dungeons. It covers a vast area of 10,000 square metres and King Henri is buried here. Unlike his palace, it was completely undamaged by the earthquake of 1842.

From Cap-Haitien I take a short flight to the capital Port au Prince or PAP, as it’s known locally. The city was almost flattened by the devastating 2010 earthquake but I’m surprised to see little evidence. Of course the Presidential Palace collapsed, now inaccessible behind boarded up walls, and the Cathedral of Our Lady of the Assumption is in ruins, but otherwise rebuilding has been relatively swift. 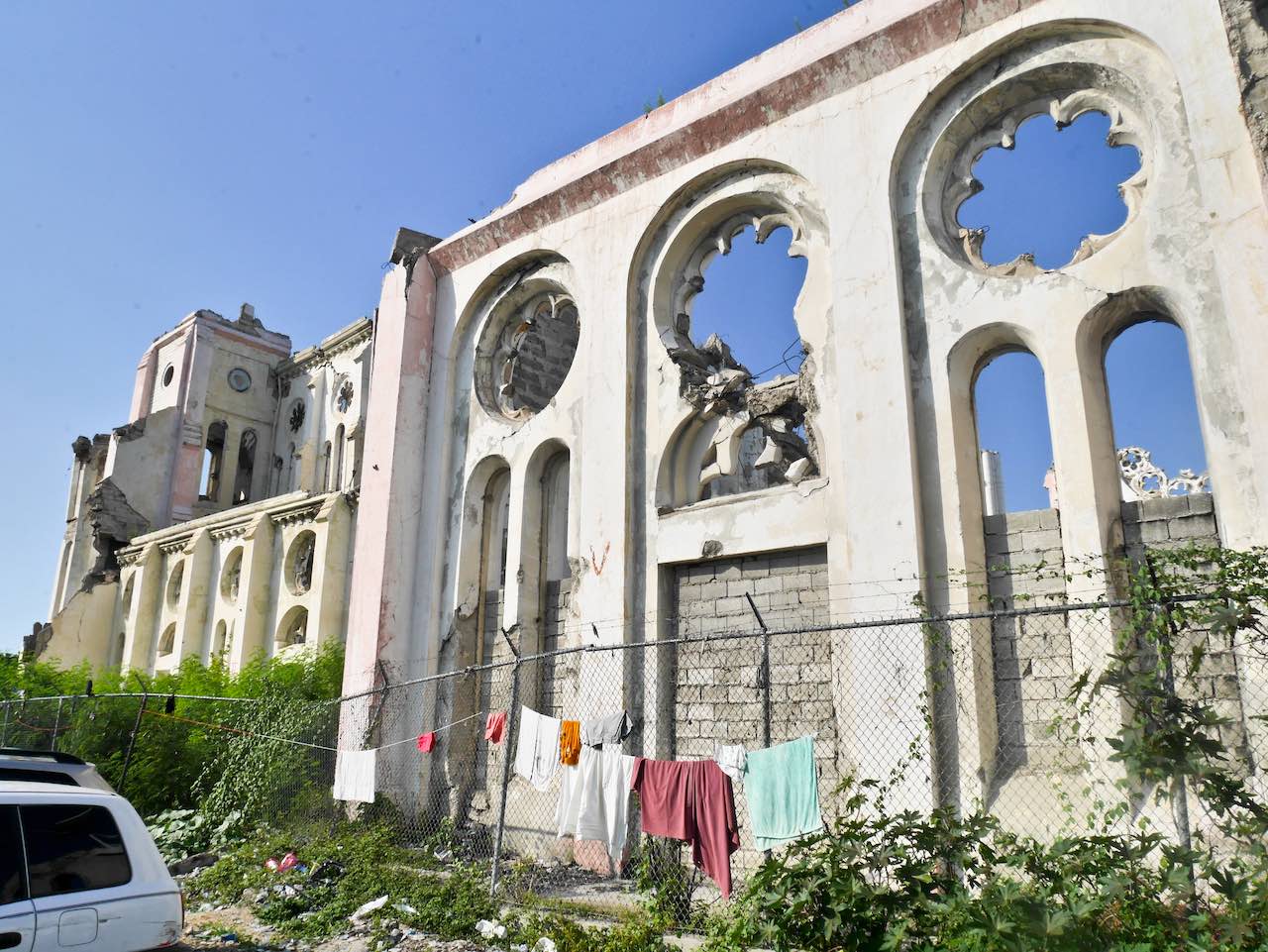 The Musée du Panthéon National Haïtien lies safely underground beneath pretty sculpture gardens in the centre of town. It features key figures from the struggle for independence and tells the history of the country. Exhibits include the rusting anchor of Columbus’ flagship, the Santa María, the silver pistol with which Henri Christophe took his own life and ‘Papa Doc’ Duvalier’s trademark black hat and cane. Opposite is Aristide’s Bicentennial Tower, standing proud, although nobody can understand what it’s for. 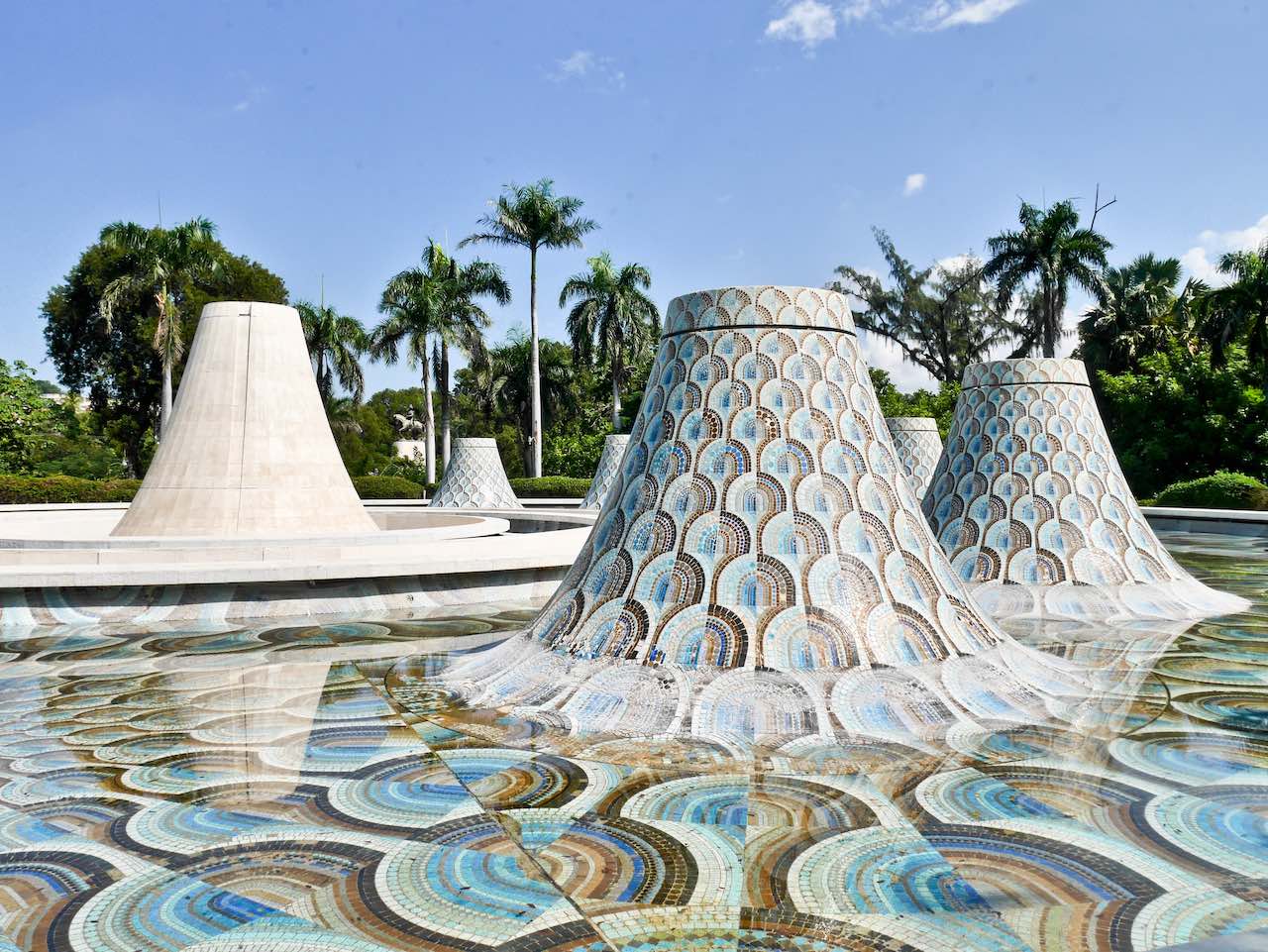 The liveliest part of town is around the Marché en Fer, two red iron-framed structures that were originally destined for a railway station in Cairo, but came to Haiti in 1891. One market hall is for produce whereas the other is an Aladdin’s cave of voodoo paraphernalia, artisan sculptures, masks and paintings. The streets around are packed with stalls, spilling over the pavements, selling everything imaginable. 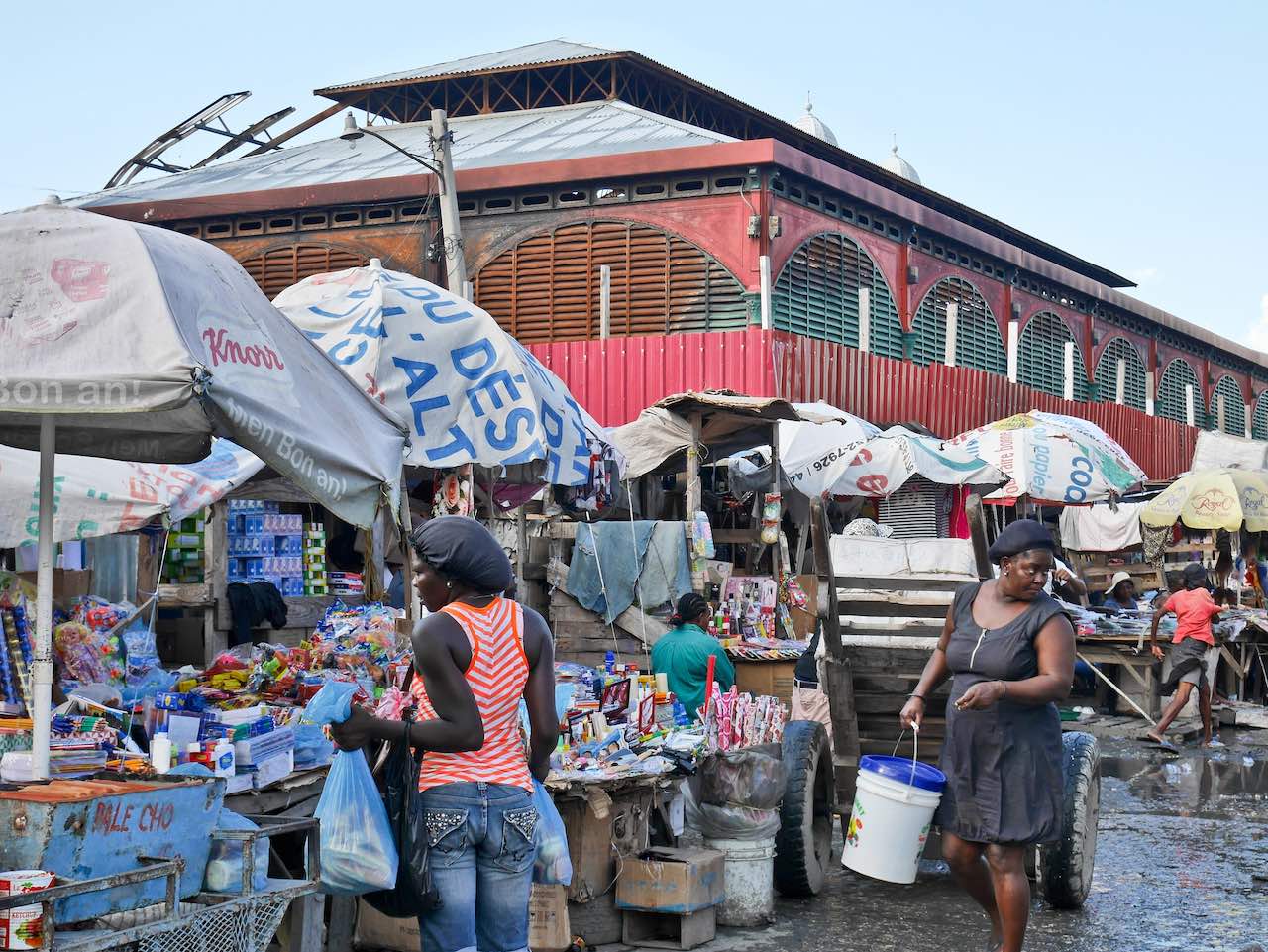 The residential areas of Pacot and Bois Verna contain the few 19th century gingerbread houses that survived the earthquake. Brick-filled timber frames hosting graceful balconies adorned with lacy wooden latticework, define a lost era. Many of them are in an advanced state of decay, as these days the rich consider this part of town too dangerous. Perhaps the most famous example of this style is the Oloffson Hotel, near the centre, which featured in Graham Greene’s The Comedians.

After a couple of days in Port au Prince, I need some fresh air so climb 10km south east into the foothills of the Chaîne de la Selle mountain range. It’s great to escape the traffic of the capital and I’m going to Kenscoff to meet Jane Wynne. Her father founded a farm here in 1956, propagating indigenous species to help conserve Haiti’s rich biodiversity. 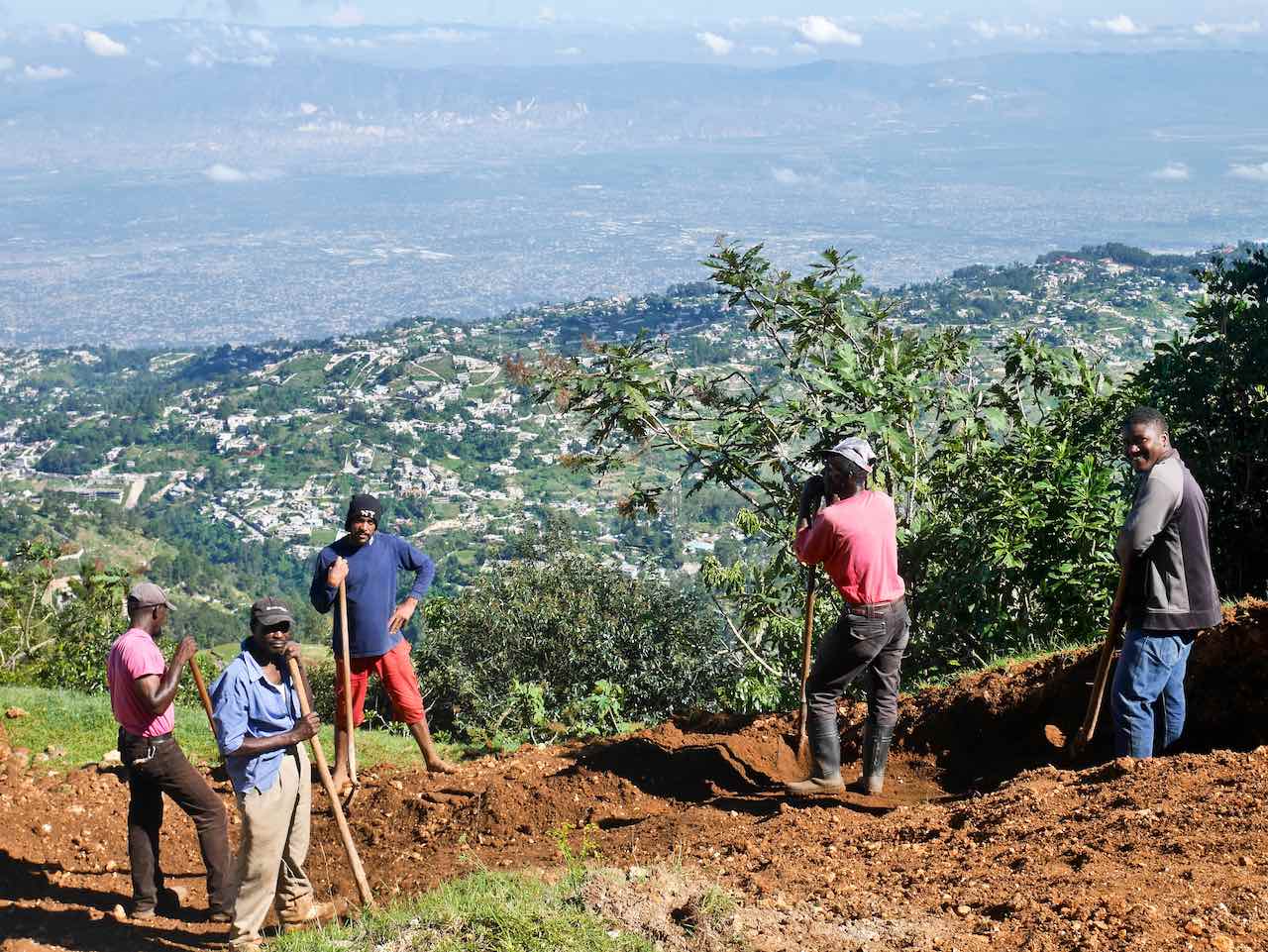 She’s still focusing on conservation and these days the Wynne Farm Ecological Park offers environmental education to locals, as well as horse riding and yoga classes. I settle for a guided tour around the site’s 30 acres, learning about the native plants and taking in the fantastic views. Looking out into this lush countryside I can see that it’s something that’s definitely worth preserving.

FLY: Sunrise Airways flies internally and also has connections to the Dominican Republic.

The Karibe Hotel is a comfortable base in Port au Prince and has excellent food.

Cormier Beach Resort is just outside Cap-Haitien on a beautiful stretch of coast.

MORE INFO: Experience Haiti has information about the country.