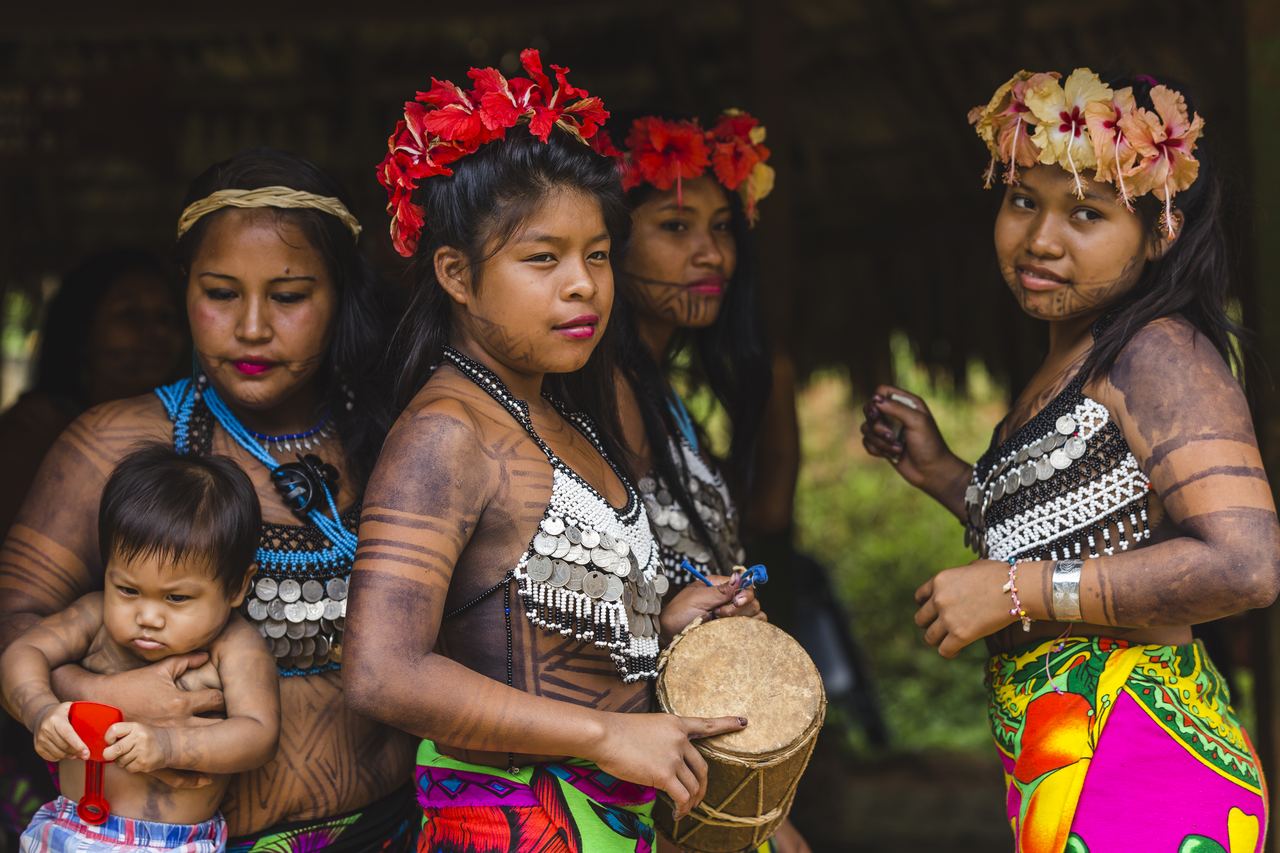 Cruise Director’s voice coming over to intercom to inform everyone on board the ship that we were about to enter one of the wonders of the modern world; the Gatun Locks of the Panama Canal giving access to the Gatun Lake and the indigenous Emberá people.

We entered these century old locks from the Caribbean Sea and my cruise ship passed under the immense span of the new Atlantic Bridge. The old locks were originally built in 1914 to raise ships to Gatun Lake where they cross the isthmus of Panama to another set of locks on the Pacific side which lowers the ships back to sea level.

Large ships passe to transit to Gatun Lake. These ships are the small ones. Huge container ships, monster tankers, and the biggest Cruise liners use the New Panama Canal.

The Locks of the Panama Canal

The Agua Clara Locks on the Atlantic side of the country and the Miraflores Locks on the Pacific side were finished and opened to ship traffic in 2016 by the Panamanian government to allow much larger ships to pass through.

The new locks are 40% longer (1400 ft.) and 60% wider (180 ft.) than the Gatun Locks.  While not as famous as the older narrower passage. It is amazing to see it raising and lowering massive vessels to/from Gatun Lake. 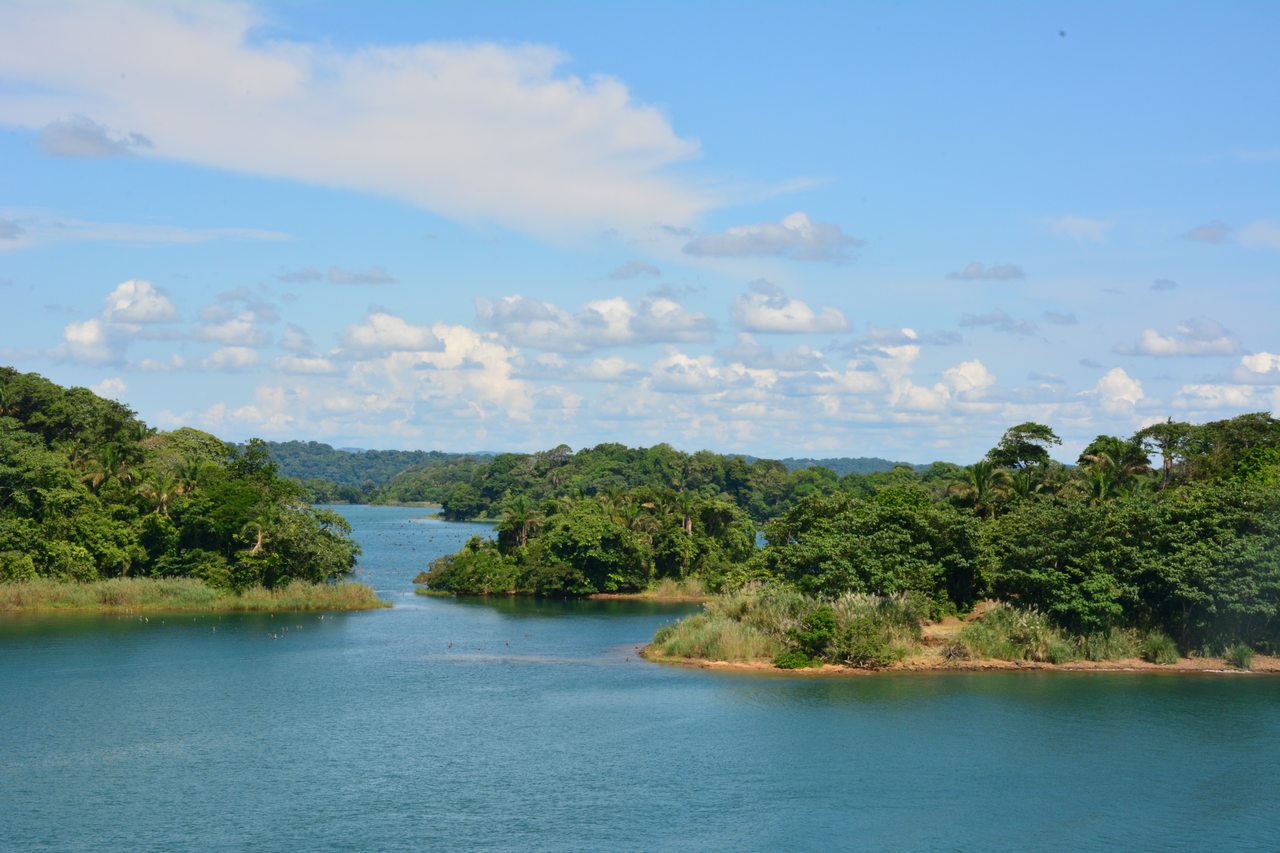 Gatun Lake is the heart of the Panama Canal. Almost half of the passage from the Caribbean Sea to the Pacific Ocean is through the 23 miles of Gatun Lake.

It is the one of the largest man-made lakes in the world and harbours some of the most bio-diverse areas on the planet. Immense tracks of rainforests, mangrove wetlands and mountains cover half of the country and provide homes to thousands of different plants, hundreds of different mammals, and nearly a thousand different types of birds.

The impassable rainforest around Gatun Lake has left this area nearly pristine. It is one of the few accessible areas where the wide variety of Central American animal and plant species can be seen in their natural habitat.

I boarded the tour boat for a cruise on the lake around the mangroves and islets covered in dense jungle.

A Tiger Heron was found hidden in branches near one shoreline. It was hard to spot with its mottled brown camouflage. The boat slowly curved around an island. The sharp-eyed Captain spotted a lone baby crocodile laying quietly on the shore.

The calls of howler monkeys attracted my attention. These large long tailed black monkeys are the alarm bells of the forest. They sat high in the branches watching my boat pass by. 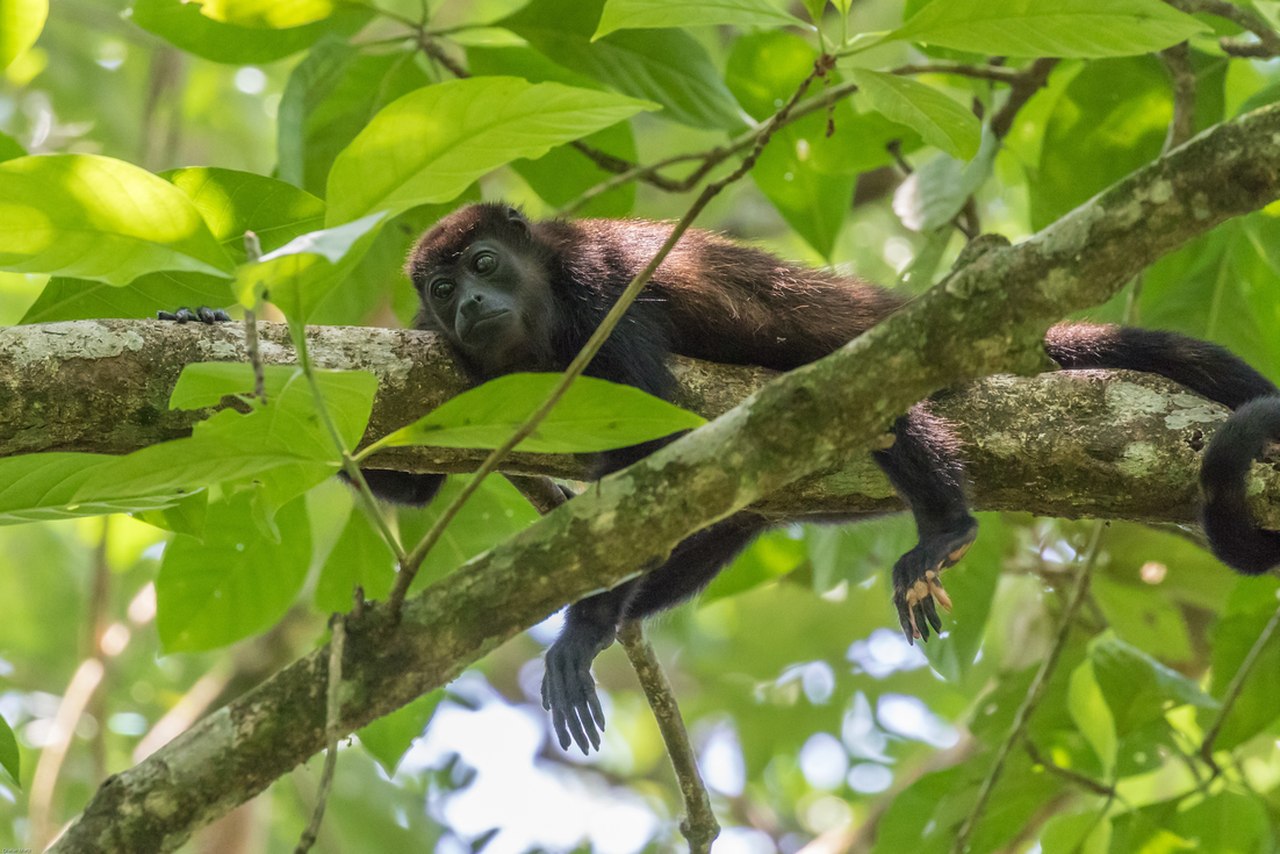 I spotted a white orchid sprouting from the branches of jungle. Panama is home to over 1200 different types.

A Jacana was seen running along the shore. These birds are sometimes called “Jesus birds” for their large feet which seem to let them walk on water. I was unfortunate in not seeing some of the signature species of the jungle like large billed Toucans, radiant hummingbirds or slow-moving sloths but my tour of Gatun Lake was not over. 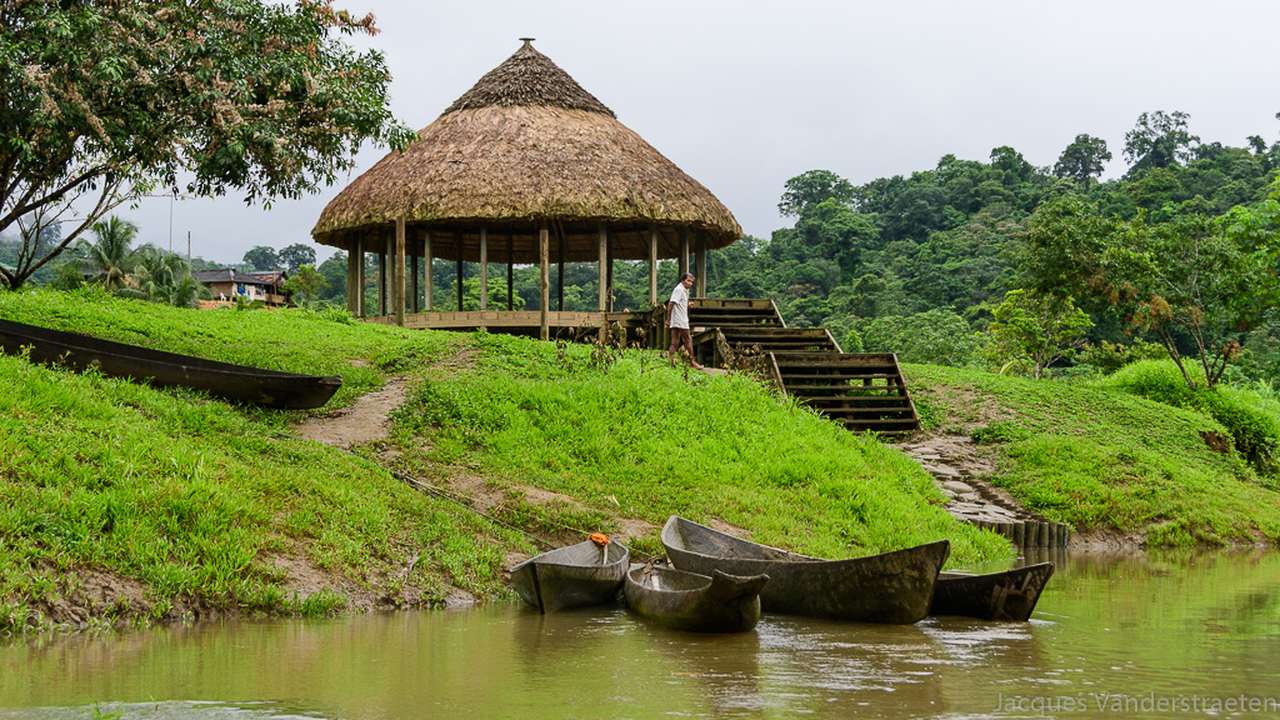 The boat pulled up to small dock below a group of palm thatched huts on an isolated island. I was going to visit the protectors of the rainforest, The Emberá. They consider the rain forest as their mother. They believe if their people disappear so will the forest.

These indigenous people are found in both the Darien region in Panama and the Choco region of Colombia. Many of their villages had to be moved to higher ground when the Chagres River was dammed to create Gatun Lake. 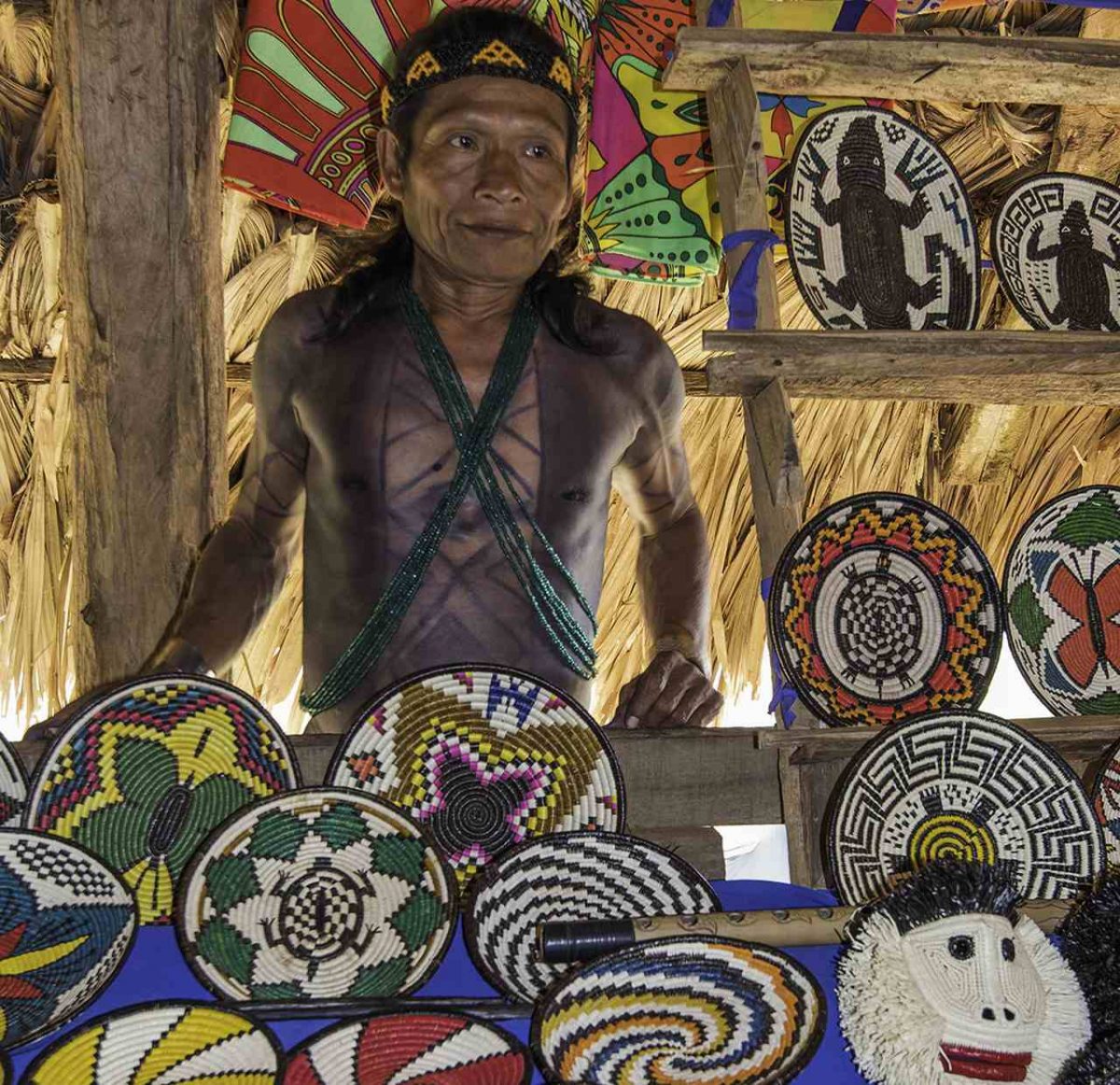 Crafts of the Emberá

They still live along the lake and make their living from handicrafts made from the world around them. I was greeted by a Emberá band playing homemade instruments while the women of the village waved.

The men wore loincloths and the women colourful cloth skirts and bodices covered in shiny coins. Their bodies were covered in dark body paintings. Their wide smiles allayed any concerns the dark coloured body art might have caused me.

The Emberá are a very friendly and accommodating people who willingly share their culture with visitors. Eco-tourism is not only supplementing their economy but helping to strengthen traditional customs and skills.

I took a seat in the common house on a bench of logs. Communal houses have large sloping roofs of palm fronds and are by far the largest building in the village. Our guide, Geronimo, translated the welcoming speech by the village elder from Spanish into English. 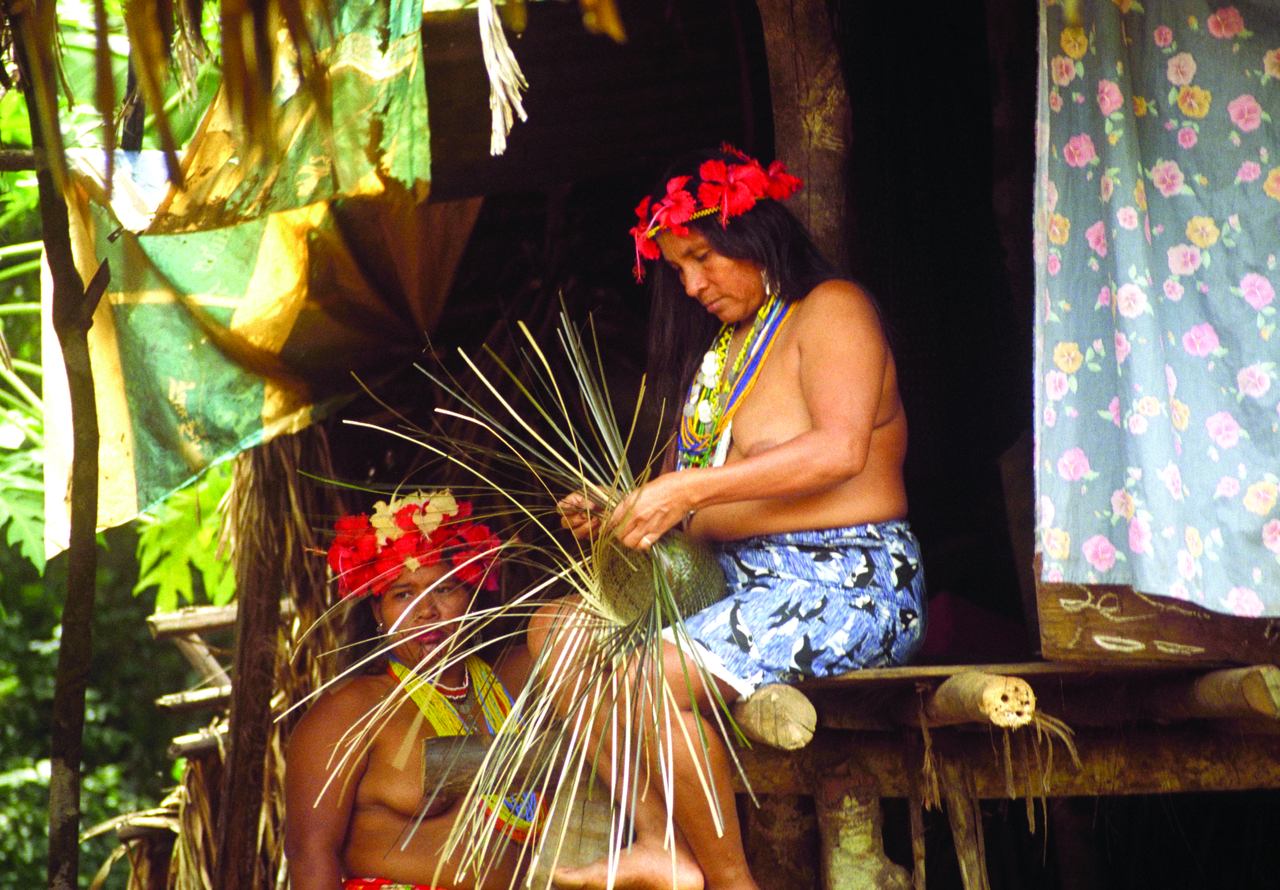 It was interesting to learn how these native people make the beautiful baskets, carvings, musical instruments and jewelry from the bounty of the jungle. They even use dye made from a jungle fruit for their intricate body paintings.

The leader’s brother described how his people use natural materials to make their baskets, trays and some jewelry. They are made from a fiber they call “chunga”. The woven items vary in sizes and color, but all the items take hours to make.

The women do most of the weaving and make smaller pieces to sell to tourists.  The men work to get the fibers as they are on the top of the palm trees.  The fibers are then dried and later colored with natural dyes.

The most common colours are natural white, brown and black. The brown colour is produced by boiling the fibre with pieces of cocobolo wood. The black is produced by submerging brown dyed fibres into the dark mud of the river from which they come out black.

Cocobolo is a beautiful tropical tree and a favourite carving material of the Emberá people. It has a deep brownish-red color. Emberá people are expert wood carvers. The work is intricate and impressive. I bought a small hummingbird carving to remind me of these talented people.

The women of the village performed a traditional dance to the music of the handmade instruments played by the men. The dance signaled the end of the ceremony that greets and informs the visiting tourists.

While my shipmates browsed the items each family had for sale I wandered around the village to view the homes and people. I saw a young boy playing with his pet, a small coatimundi. I was intrigued by the body art and intricate designs I saw on the villagers. I smiled when I noticed many of the silver coins adorning the women’s bodices were American Nickels. Dimes, and Quarters.

The black body painting that nearly all members display are not permanent tattoos. The Emberá use the Jagua fruit to produce a black dye to paint people’s skins. The designs create an indelible two-week tattoo.

The Jagua body painting is still in use for all celebrations and is one a very important tradition of these people. The painting helps everyone connect to the spiritual world and bonds them to their culture.

My twelve hours in Panama ended as the sun set and my ship headed out to sea. I gazed back fondly at the shore of one most interesting and diverse countries of the Americas.