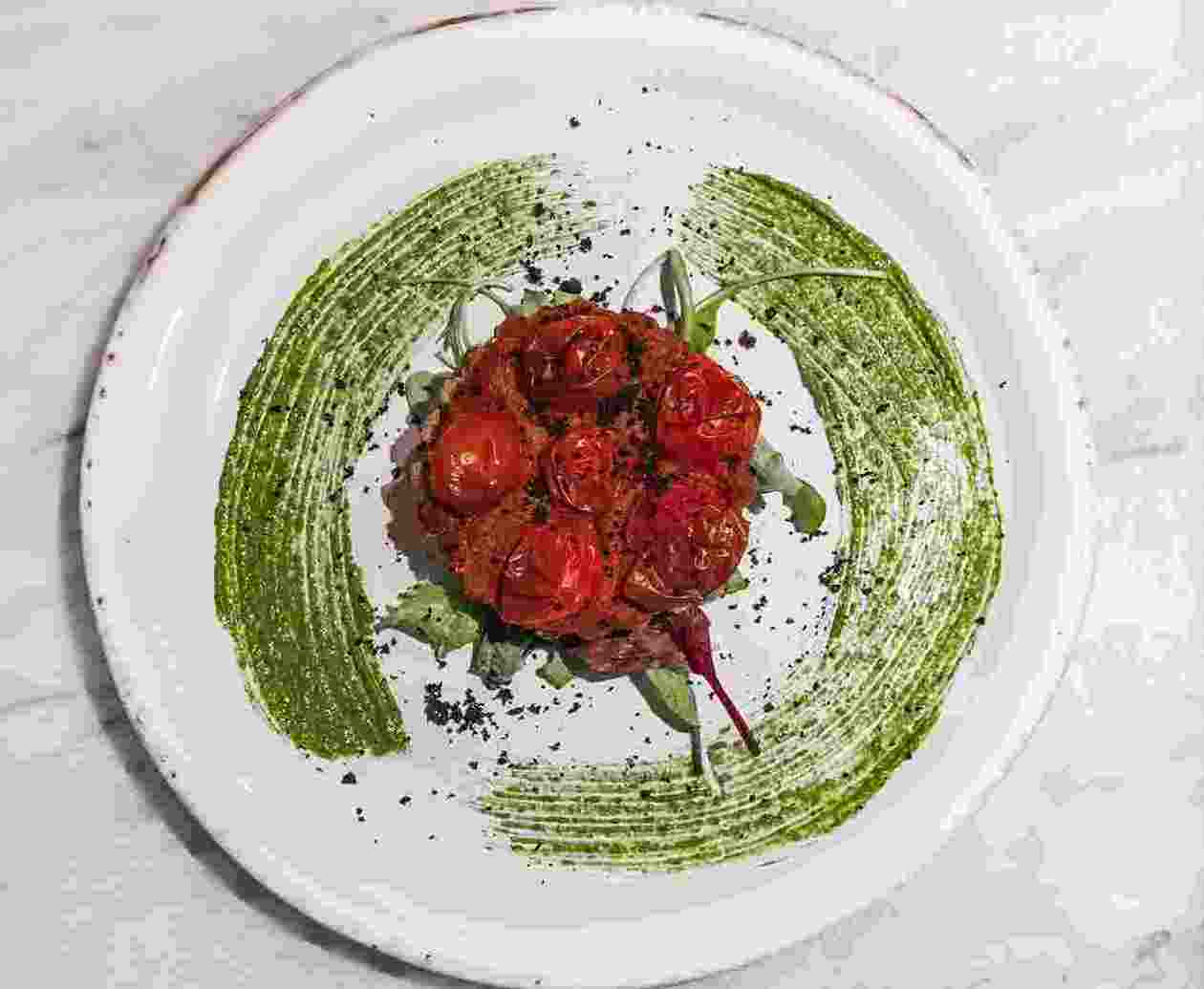 On a trip to Paris in the early 1990s I was once served a plate of grated carrot as a starter, swiftly followed by a plate of lettuce, complete with an artistic swirl of vinaigrette, as the main course. The restaurant didn’t know what to do with me. Apart from the comedy value, it was a culinary disaster saved only by the beautiful historic surroundings of the River Seine.

As I travel to cities in Europe and the US for my work, I like to take a moment to visit a local site of interest, see a famous building or discover a long-lost fact about an old street. I also like to eat. It just so happens I am a vegan, so my restaurant choices are limited but it has rarely been a problem. In fact, in many instances it has been inspirational, not just for the quality of food and service but for their location and ambience.

Here, in no particular order of preference, are six of my favourite vegan-friendly eateries in locations of cultural interest.

There is a bit of local folklore in the south west English city of Bath that there are more dead people per square foot, buried under the city than in any other place in the country.

As I sat looking out at the golden limestone buildings from the Green Rocket Café, a vegetarian and vegan eatery on the corner of Pierrepont Street, I wondered how many skeletons were lying under the road?

Next door is a house where Lord Horatio Nelson stayed between 1780 and 1781 with an apothecary called Spry, following thirty months continuous service in the Caribbean. The wall of Parade Gardens opposite was where Russell Crowe stood when he was filming the closing scenes of 2012 movie Les Miserable.

Started by former Demuth’s chef Philip Pearce in 2013 (Demuth’s was the go-to vegetarian restaurant in Bath for many years which is now the sumptuous Acorn Kitchen), the Green Rocket is a warm and welcoming place with friendly staff and a solid menu of home-cooked food. It’s actually part of a growing number of vegan-friendly places in the town, which includes the lovely Roots and Shoots, Sky Blue Café, Beyond the Kale and Nourish. 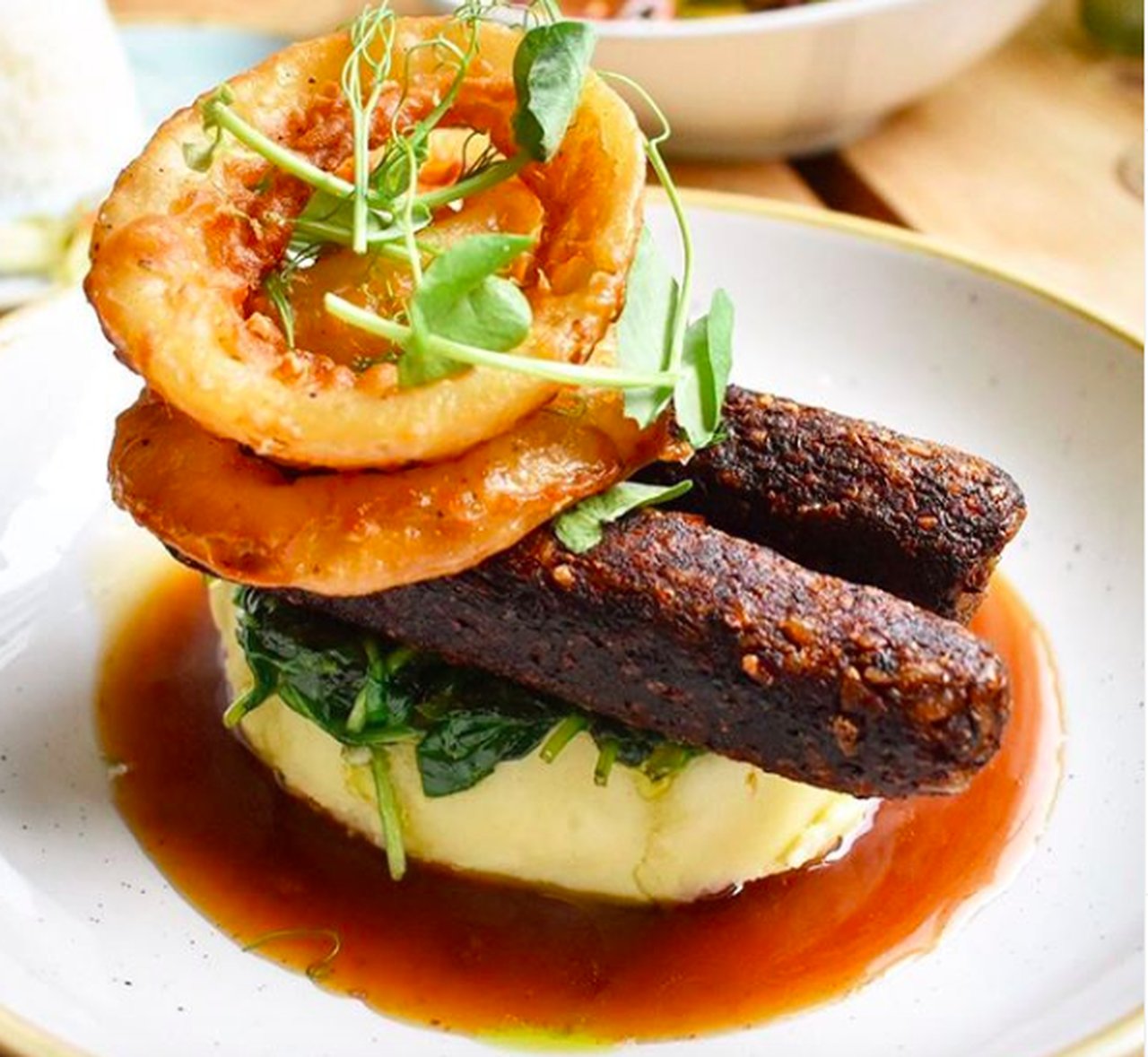 The Green Rocket menu, with ingredients influenced from Italy to Middle East to India and China, offers an eclectic choice of dishes catering for broad tastes. It strikes a good balance between the easily accessible ideas, such as the Tempeh sandwich and the rice burger, smoked mushroom and chestnut sausages and what people may see as more ambitious dishes, such as Vietnamese coconut curry or the Imam Biyaldi baked aubergine.

Dig it, but not too deep.

When you see the ivy-draped, ochre-coloured stucco walls of Via Margutta in Rome’s Campo Marzio region, it’s easy to see why so many artists, past and present, have set-up home here, including, briefly, Pablo Picasso. The cobbled, plant-lined street is full of charm and has a credible movie history.

At number 51 there is an entrance to a courtyard, where terracotta pot plants spiral out of control and artists still work from the many studios. This is also the location of Joe Bradley’s (Gregory Peck) apartment in the classic movie Roman Holiday[iii]. As Jeff MacGregor in his Smithsonian Magazine article[iv] put it, “every director from de Sica to Sorrentino has been through here with a camera.” 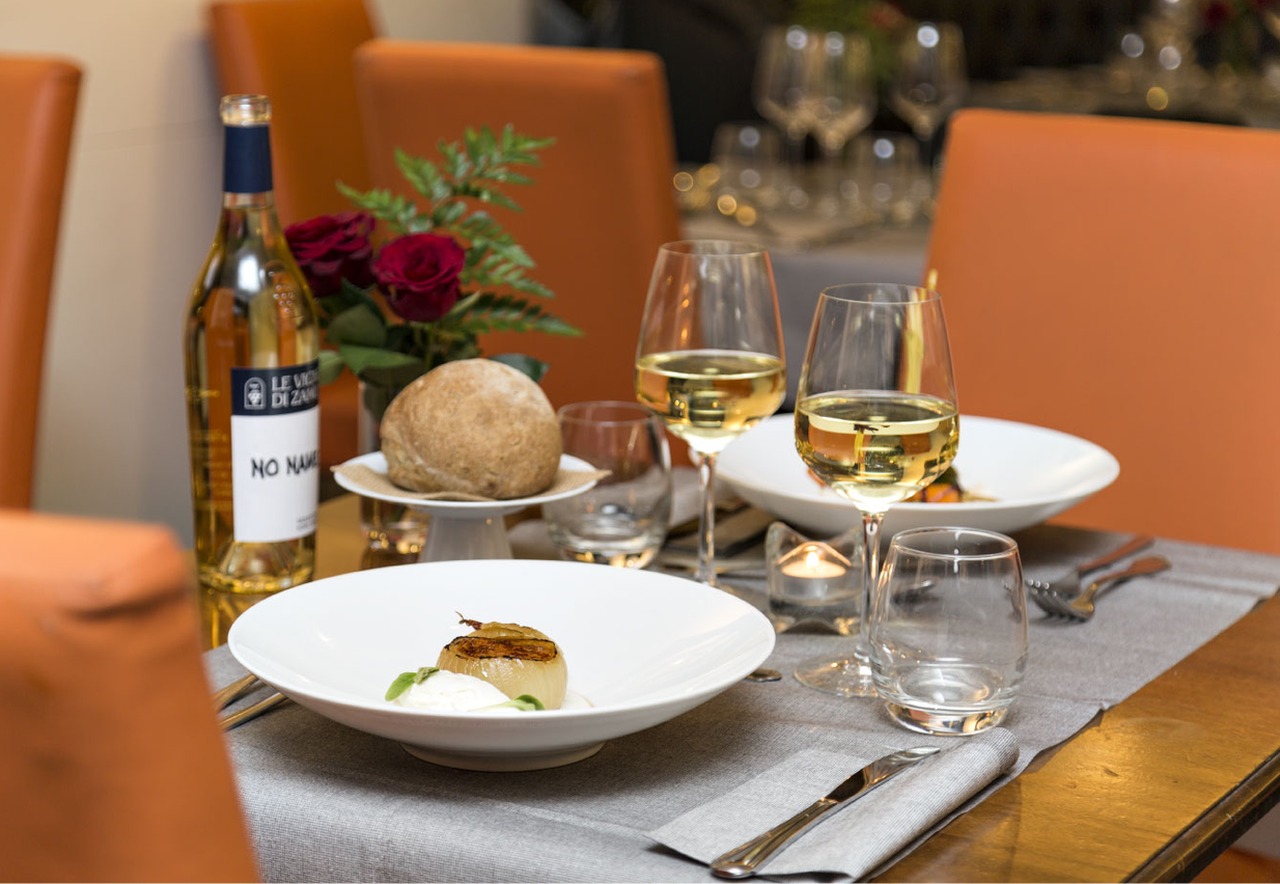 Il Margutta, at the end of the street, next door to La Dolce Vita director Federico Fellini;s house, is a smart buffet-based restaurant with neat décor and art-laden walls. The business was started in 1979 by Claudio Vannini[v] and has flourished into a well-known local spot for vegetarian and vegan cuisine.

As I hustled around the buffet – at one point the experience was a bit like driving in Rome, diners cutting up diners, overtaking on corners, parents keen to get food for hungry kids waiting at tables – what you notice first is the colours. The sheer variety of quality dishes is worth the fixed €25 fee. Cous cous, polentas, gorgeous datterini and sun-dried tomatoes, tonnarelli and tagliatelle pastas, artisan breads, soups of all colours and cakes to make your mouth explode. It was easy to eat a rainbow and feel totally sated. Action.

With a Victorian frontage and sat next to what was once Ewald’s confectionary – one of many German immigrants who settled and set-up shop in the area in the late nineteenth century, HipCityVeg is a clean-lined, smart-looking, plant-based fast food restaurant with an intriguing menu.

It’s located on 7th Street NW, which at first glance is a typical concrete avenue. A central conduit for trade and traffic since the city’s inception, the street is a blend of old and new, typified by the old Grogan Furniture Carpets & Co store (you can still see an old advert sign daubed on the wall high on the left-hand side of the building) which is now a Nandos. Next door at 225 7th Street is the US chain Hooters, although in 1904 this was home to the Capitol Phonograph Co, selling records at 35 cents each. T

his is an area that has seen a huge transition. In 1968 it was hit by riots following the assassination of Martin Luther King on 4th April that year, while part of the Walter E Washington convention centre sits on the site of a group of buildings that were hit by fires and looting, including Cohen’s Men’s Wear store.

Nicole Marquis founded HipCityVeg in 2012 in Philadelphia, “to bring delicious vegan food to the world by presenting it in a form that people already loved.” 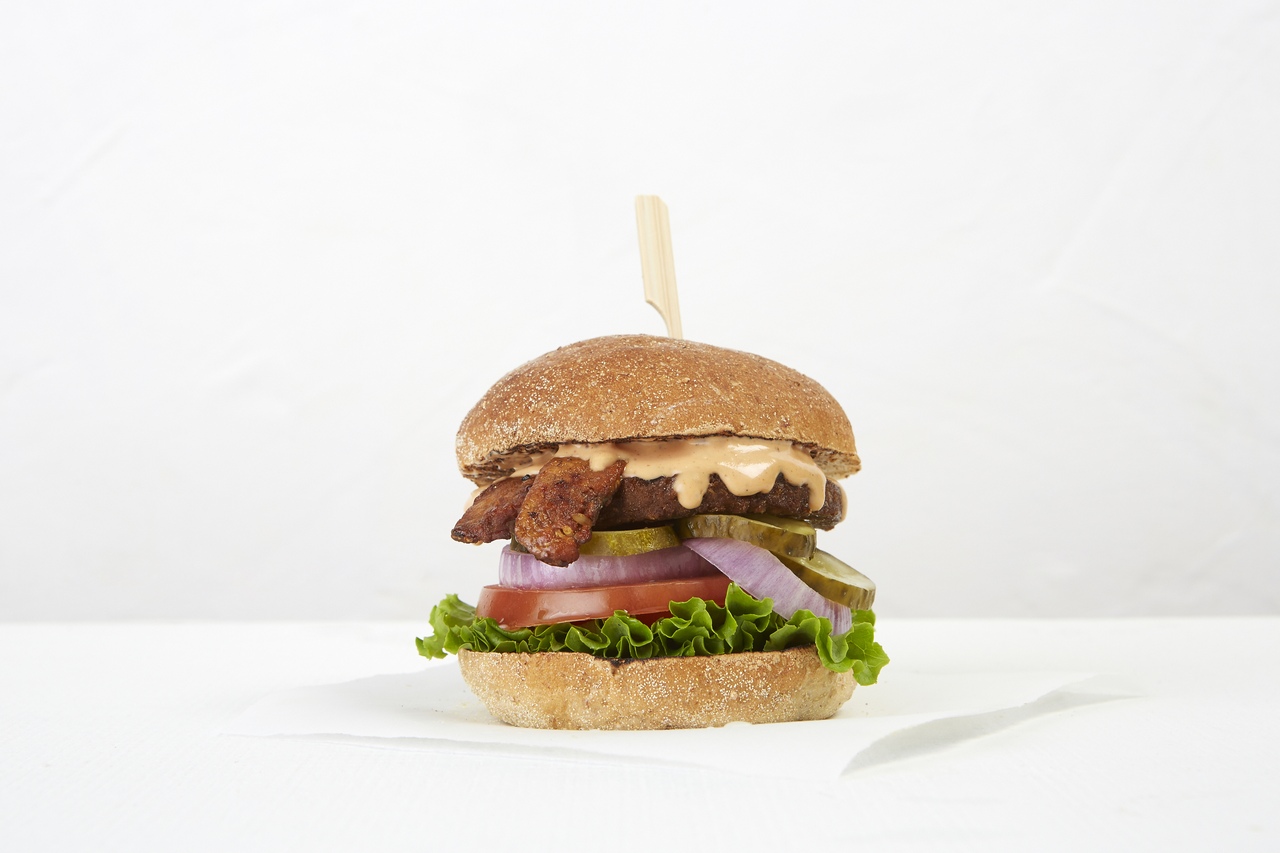 The Ziggy burger, made of organic smoked tempeh

There are four outlets in Philadelphia with Washington the first branch outside of Pennsylvania. With a good choice of burgers and sandwiches, plus a “chick’n” range, there is plenty at HipCityVeg for the experienced vegan or even the casual passer-by who may want to experience meat and dairy alternatives. The Ziggy burger, made of organic smoked tempeh with some sweet potato fries and a kale lemonade was a great choice, filling and full of flavour. The breakfast menu looked particularly appetizing too with tofu scramble wraps and bagels. It’s a great chain in the making.

Heddon Street, just off London’s bustling Regent Street, looks very different today than the 1972 scene of David Bowie’s iconic album cover for Ziggy Stardust and the Spiders from Mars. While a plaque commemorates the significance of the location (this is only the third fictional character to get a London plaque apparently – Sherlock Holmes and Lara Croft the other two, the street is now buzzing with eateries and bars. 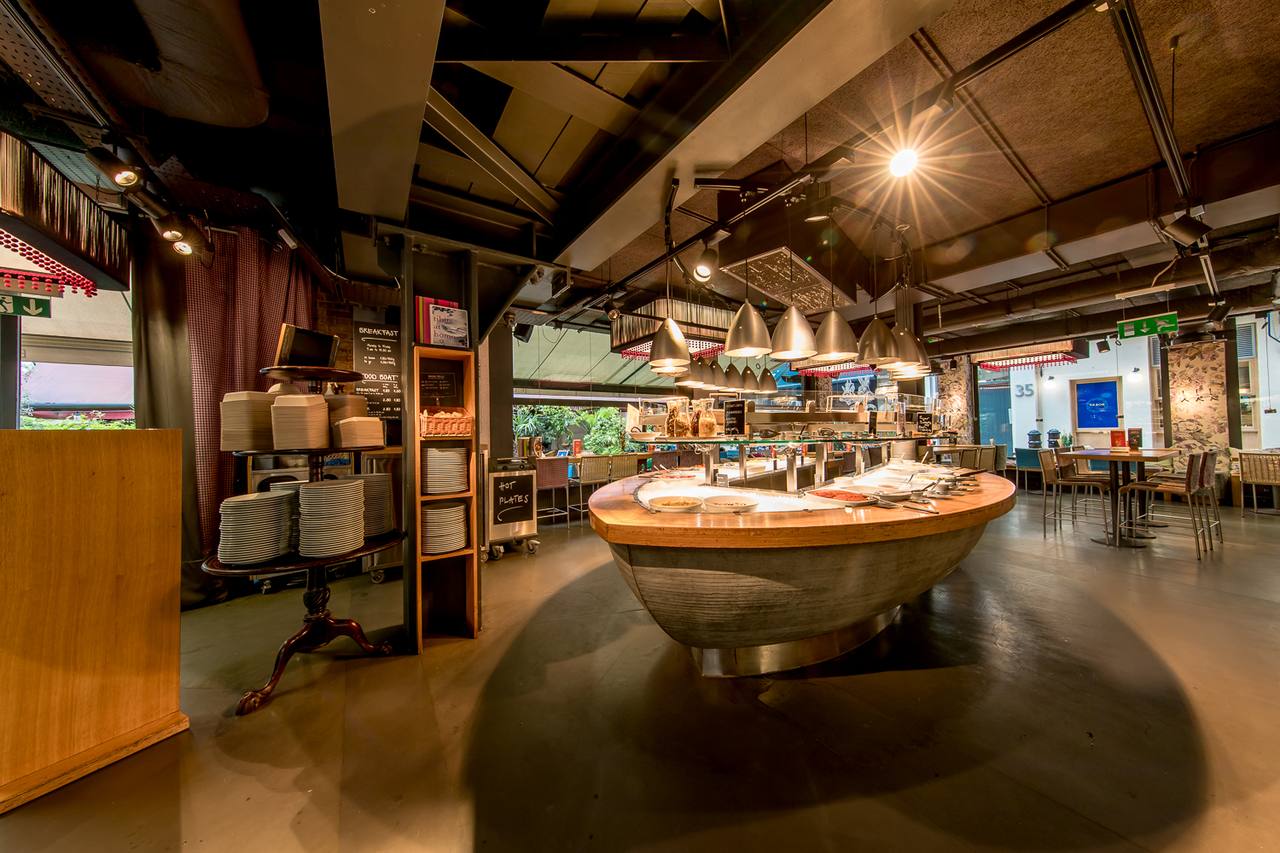 Tibits, a veggie/vegan buffet success story that hails from Switzerland is located at No.12 opposite the Bowie plaque. The Frei brothers – Reto, Christian and Daniel – opened this first branch of Tibits in 2000 and there are now eight restaurants (there’s one on Southwark Street near Tate Modern and the others are in Switzerland).

The format is simple. Get a plate, fill it with food from the FoodBoat and then get it weighed. You pay by weight and the prices always seem reasonable, although of course, this depends on what you are eating and how much you pile up the plate.

The thing with buffets is that you can often surprise yourself with what you are prepared to mix. Humous and falafel with a sundried tomato cous cous salad sounds about right but I also threw on some samosas and lentil dal. OK that may not be everyone’s idea of a great mix but it really worked, especially when followed-up with one of the many sweet options such as the toffee pudding with vegan cream. Go on, experiment.

Open bottles of half poured Pignoletto were haphazardly scattered across the curved bar top of Osteria del Sole, as after work Bolognese hustled for drinks to celebrate the end of the week. The Vicolo Ranocchi, a small side street in Bologna’s medieval Quadrilatero area, bustled with a mixed age, warm and friendly crowd, clinking glasses of fizzy red Lambrusco and nursing bottles of cold beer. 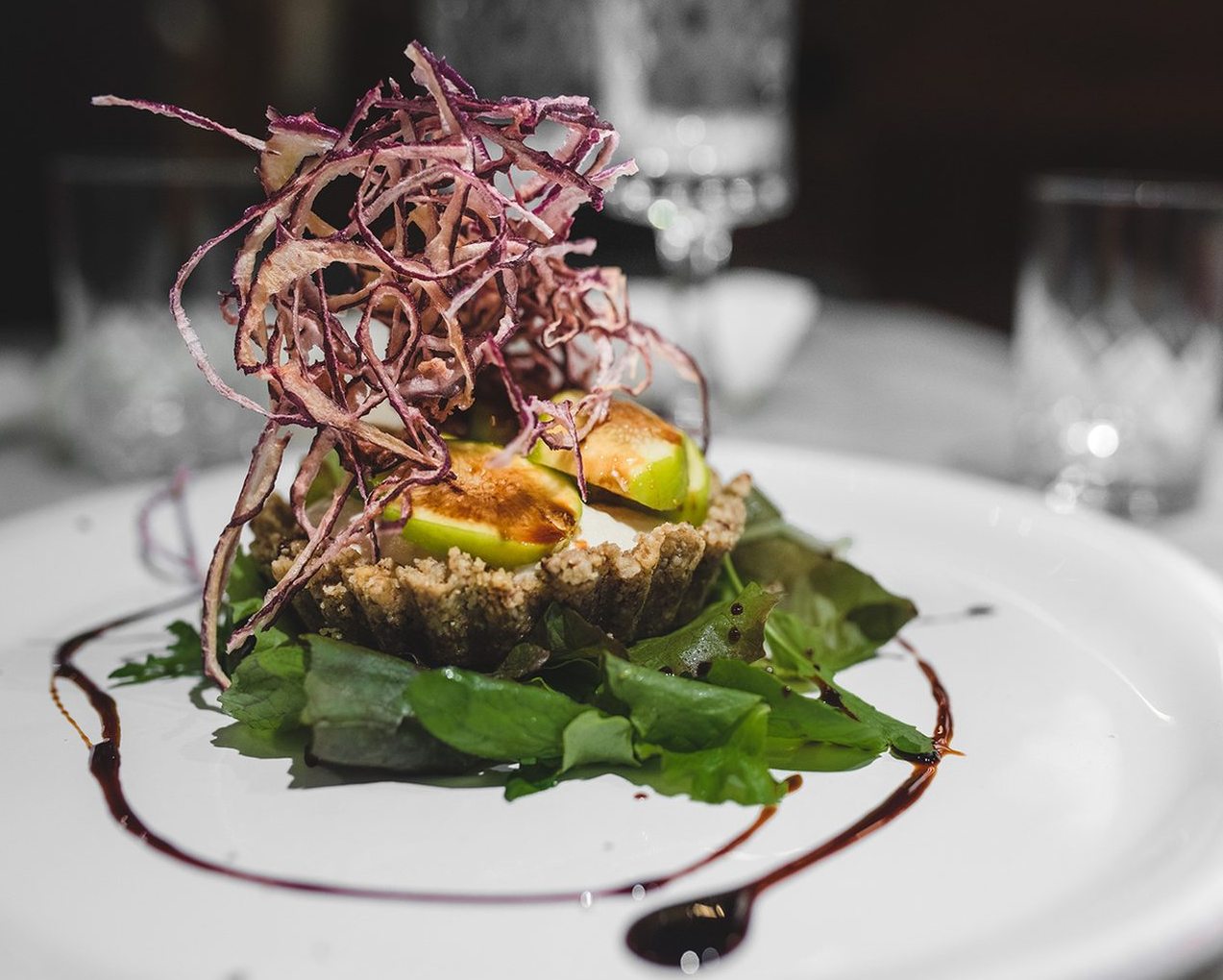 Osteria del Sole is the oldest bar in Bologna. There has been a bar here since 1465 – that’s less than 30 years before Michelangelo arrived in the city in 1492, penniless and out of work (he’d left Florence following the exile of his patrons The Medici family).

Across the square and onto the cobbled Via de’ Fusari and then Via Battibecco, is Botanica Lab Cucina, a Bistro-style plant-based marvel. With an extensive and creative menu, with some twists on local favourites, including Gnocchi and wholegrain pasta, Botanica Lab Cucina is a mid-range restaurant (in price and style). The triangle-shaped starter – fresh homemade pasta with a macadamia “ricotta”, beetroot and herb filling – was excellent, as was the burger, made with quinoa and legumes and served with roasted potatoes, caramelized onions and a selection of sauces. Finish it off with a raw cheesecake – a semi-frozen chocolate and vanilla and an exquisite mango and coconut.

Often referred to as the food capital of Italy, Bologna and the Emilia-Romagna region are famed for Parmesan cheese, balsamic vinegar, Ragu and tortellini. There is now a rapid rise in vegan eating, with a younger crowd demanding different cuisines and flavours, although it may be too soon to suggest this could tarnish the city’s reputation as La Grassa, or the fat one.

There is a lot of Lycra in La Jolla. This well-healed northern suburb of San Diego in Southern California is yoga town, with a warm climate, sun-drenched beaches, glistening Pacific ocean, sea lions and seals, pelicans and wide streets lined with expensive shops and houses. 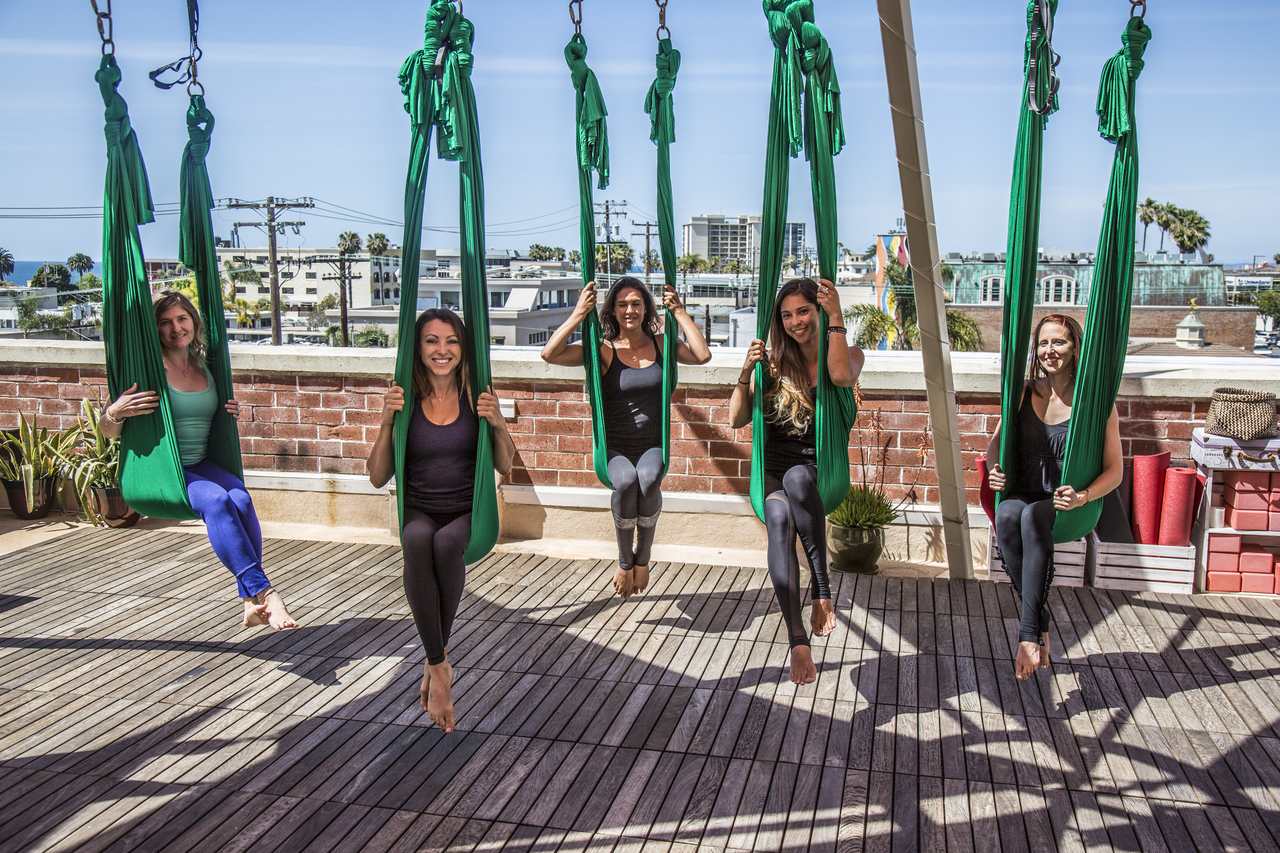 Birthplace of Gregory Peck La Jolla has been home to many a famous name. Raquel Welch apparently went to the local High School and Theodor “Dr Seuss” Geisel was a long-term resident. His wife still lives on the estate in the country club area near Mount Soledad. In fact, La Jolla was an inspiration for a number of well-known Dr Seuss creations, including ‘The Fish’ from Cat in the Hat (based on the local orange coloured Garibaldi fish) and the ‘Trufulla Trees’ from The Lorax (based on the Monterey Cypress trees found in Ellen Browning Scripps Park on the waterfront).

The Trilogy Sanctuary is in many ways a throwback to what people really think of vegans. It’s old school. It’s yoga, beards and “yo dude” packaged with a view and really great food.

The café – “can I help you brother?” asked the laid-back bearded waiter – had some excellent choices from the Vega nachos with cashew-based sour cream and quinoa ‘chorizo’, to the Trilogy Cheeze burgers, made from brown rice, beans and portobello mushrooms, topped with onions, tomatoes and lettuce.

Peace brother and be patient, the good times are coming.