The wide, sandy Cornish coastline is perfect for those long walks especially when there is a sea breeze ruffling your hair.

It’s the most rugged, spectacular coastline in England with lots of hidden bays and hilltops. Everywhere you venture you will find people walking and exploring even in the most secluded places. Ramblers are rampant and when the wind picks up on a cliff top you may have to hold on to your belongings, but its also exhilarating. It’s enough to work up a healthy appetite.

So, drop into Rick Stein’s Seafood Restaurant in Padstow for a sublime dish of Dover sole with sea salt and lime. The service is excellent and the establishment is hugely renowned for the creative ways the food is presented. Dinner can be a long stretched-out affair, and you can stay the night. This restaurant has 16 bedrooms and some have sea views. Book in advance though, because even though it is pricey there is often a waiting list for the tables.

Rick has also opened a more chummy alternative with friendlier menu prices at his St Petroc’s Bistro nearby in New Street. The bistro is part of a 10-bedroom hotel of the same name and a nice place for casual dining.

He has a café in Middle Street which has become something of a foodie corner as, a few doors down, is Paul Ainsworth’s Michelin-starred, Number 6, where everything is homemade, right down to the bread in the basket. Highly unpretentious, its reputation has grown enormously in the past few years, earning him 50th place in the Sunday Times Top 100 UK Restaurants.

Jamie Oliver’s Fifteen Restaurant in Watergate Bay is one with a view over the ocean and a kitchen centred around a charcoal-fired Josper oven. This is where the fish dishes are char-grilled. Food is great, but this snappy looking joint also comes with a heart-warming story. It is owned by a charity, Cornwall Foundation of Promise (CFoP), and was featured on British TV as a project taking on disadvantaged apprentices and teaching them to produce sublime dishes. It has gone from strength to strength with several outlets around England.

If you revere breakfast as the best meal of the day, then here’s a recommendation: the best in the area can be had at Woodland’s Bed and Breakfast Guesthouse located on the tip of Padstow within a farmland setting. It is owned by Hugo Woolley, who writes books on breakfasts and it is worth spending at least one night (the Bay Room has a four-poster) to get a taste of his morning nourishment. 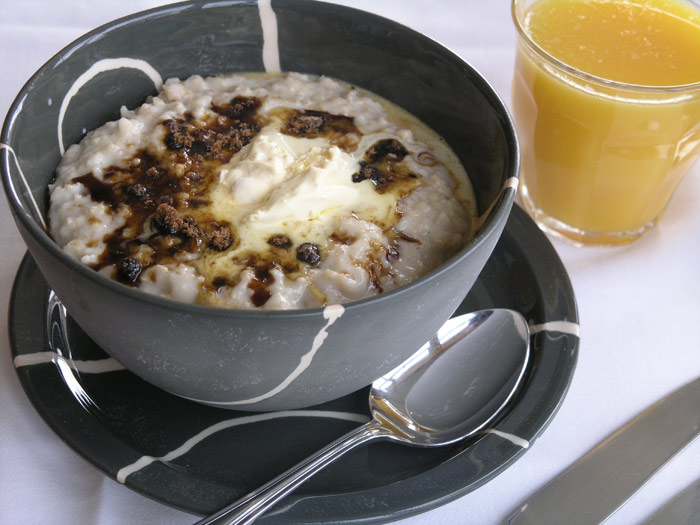 Porridge for breakfast at Woodland’s Bed and Breakfast Guesthouse

The restaurant in The Old Quay House Hotel in Fowey is the one the locals recommend, but if you are looking for a view and an alfresco experience head for Food for Thought on the quayside. Of course you’ll get the views over the water but you will also be right in the buzz of the place. It’s fair to say that the venue is considered very trendy locally – there’s a snap of Tony and Cherie Blair’s visit on the wall – but it also means that at peak times service can be a little slow.

Between Padstow and Newquay there is Mawgan Porth, home to the four-year old super-eco hotel The Scarlet. Many go there just for the robust food served in the restaurant. There’s a veggie menu too serving grilled halloumi, mango and chilli, coriander and Tempura courgette flowers and herb oil.

At Bude on Summerleaze beach, for something a little different, there is a rustic and really good value bistro style restaurant called Life’s a Beach. Locals love it for the simplistic, no frills ambience but good quality food. 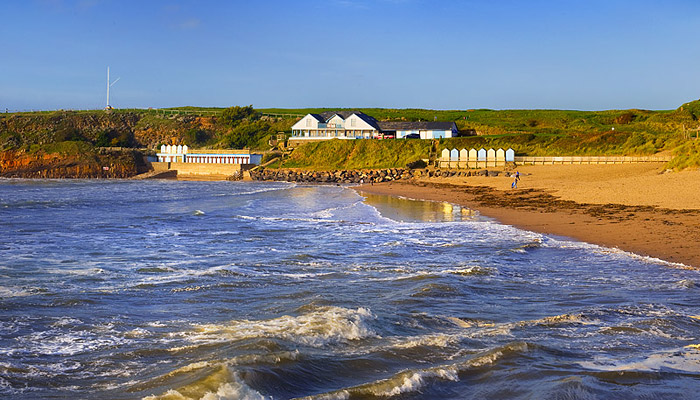 The small family run restaurant the Pavilion Boatshed on Beach Road Perranporth is establishing itself as quite the foodie gem. With its wood floors, grey and beige seating, the chef Matthew Burrel has created an intimate and chic venue. Get there in the summer for some al fresco dining on dishes like monk fish and vegetables with the bonus of the lovely Perranporth beach as your backdrop.

Whichever restaurant you visit, go ahead and have a dessert. Once you step outside you’ll find the landscape beckons irresistibly and in all likelihood you will be walking off the calories anyway.