Hip, chic with a strip club in its basement, The Clermont Motor Hotel rocks. 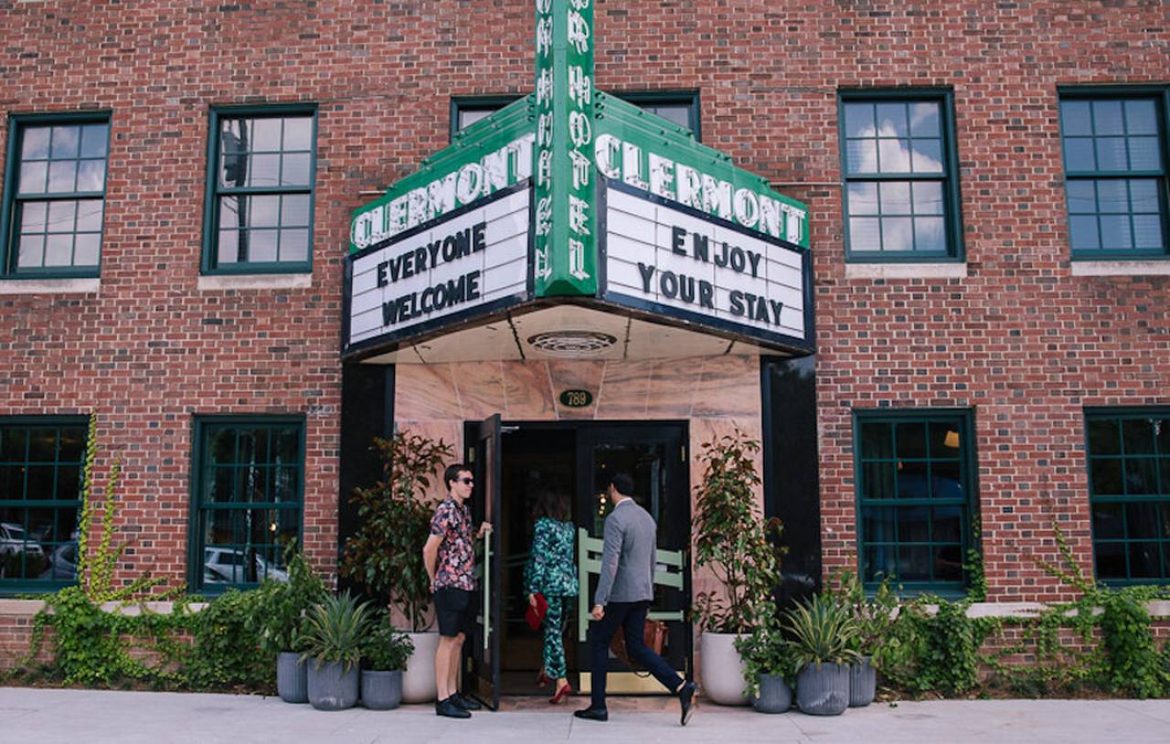 It is a fairly rare occurrence to be staying in a city landmark but, if you go to Atlanta, you can do this at one of its true landmarks when you book a room at the Clermont Motor hotel. It is instantly discernible from the road because of its iconic radio tower – complete with the hotel name in big neon letters – atop its roof.

Not situated in either the downtown area or the midtown area, but rather in Poncey Highland – a Boho part of the city close to the University District and to the large Piedmont Park, the Clermont has been a hotel for a couple of years shy of a century which makes it reasonably historic in American terms.

The Clermont, having been converted to a hotel from an apartment block, was originally called the Clermont Motor Lodge – supposedly a less-than-respectable rest halt, where Al Capone was apparently a regular patron.

Once left to dilapidate into a fairly sorry state, the hotel was bought by its current owners a decade ago and completely renovated.

Also, it is the only hotel I know that has a strip club in its basement.

The Clermont is one of the hippest and chic-est places to stay in Atlanta and therefore it is not a budget buy. The hotel is thoughtfully designed with well-equipped rooms and a great ambience to it. Great if you are an out-of-town visitor who wants something different and special. If you are more local it is definitely an “occasion” hotel. 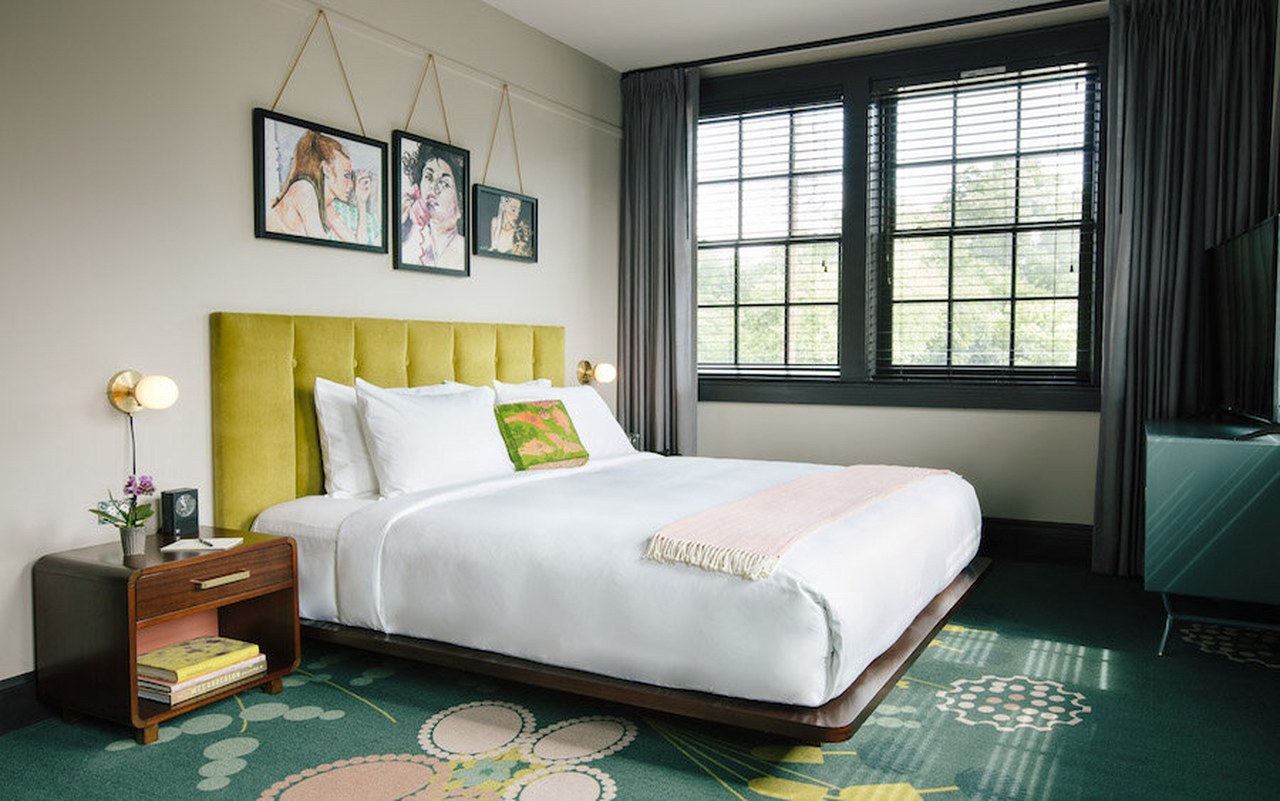 The Clermont boasts 94 rooms, of several different types, determined by the size and included facilities, but all have been finished in a retro, “swinging 60s” style – giving it an almost hippy vibe. That said, the beds are large and comfortable, the bathrooms are large and overall, modern technology is most definitely at work there.

It has won numerous plaudits for both the style of the building and the visitor experience, including The Loved By Guests award for 2021 – a year that also saw it officially listed amongst America’s register of Historic Places.

The Clermont is one of the few hotels that I’ve been to, where the whole of whose roof is a cocktail bar. The roof, complete with its astroturf floor, has a great selection of cocktails.

There’s also some good food to be had at the same time from the bar menu – as well as a fantastic Vista of Atlanta, particularly at night, available to anybody who spends their time out there. It also seems to be a great gathering place for travellers from around the world (well it is, self-proclaimed, a motor hotel).

Although it boasts a brasserie – the renowned Tiny Lou’s, which is certainly worth considering if you want to hole up in the hotel – The Clermont doesn’t actually do breakfast as such, so this is something that you can either obtain from one of the numerous nearby eating establishments or which you can buy items for, from the hotel coffee shop.

There is a welcome drink when registering and free complimentary coffee in the room.

The Residents Lounge within the Hotel on the ground floor – not to be confused with the Clermont Lounge, (which we will come to later!) – and it boasts a coffee/souvenir shop which, by the way, serves free coffee to residents.  It is always pretty busy and you are left in no doubt that Clermont is a “happening” place.

There is a good concierge service and the staff are extremely welcoming, but it did take me three attempts to get a bell boy up to our room for our luggage, despite being told each time one would be coming straight away.

There is valet parking – but I would also question the need for it if you do have a car because the road at the side exit of the hotel has plentiful free parking within a hundred and fifty yards, so save yourself the $40 per day with a short walk.

From $202 + tax for a Napoleon room with Kingsize Bed.

The Clermont’s location makes it a good base from which to explore some of the well-known tourist highlights of Atlanta. It is where Martin Luther King lived and worked and the home of Coca-Cola and you can go behind the scenes at the plant to see how one of the world’s most popular drinks is made.

It is also famous for being where the movie classic, Gone with the Wind was based as well as where the Living Dead and streaming TV sensation, Stranger Things, was filmed. The world’s largest granite mountain, the aptly named, Stone Mountain, and the multi-faceted park around it, are also a fairly short drive away – as,  in the opposite direction are both Downtown and Midtown, each with a huge variety of restaurants and watering holes.

Finally, though not actually part of the hotel itself, but definitely nearby, by dint of being in the hotel basement, is the famous  “Clermont Lounge”, which makes it the only luxury hotel that I’ve ever stayed in that has a strip club in its basement.

Surprisingly, this is not what you would expect from a joint of this nature. It is renowned for being where ladies who one might have expected to have retired as dancers still find gainful employment. They are genuinely treasured by the punters – who knows what to expect at the “Clermont Lounge”.

All in all, the “Clermont Lounge” had a surprisingly warm and wholesome feel to it – (which I appreciate seems somewhat at odds with the nature of such an establishment) tempered by interspersing the dance routines with Karaoke performances in the other half of the bar.

The Clermont is enjoyable, friendly and different – with a fair streak of romance running through it. You could easily go posher, but would you have as much fun?

The novelty wears off quick. It’s clean and neat, but tries too hard to be trendy. Plus, the location is terrible. Do yourself a favor and stay at any one of the truly classy hotels in Buckhead.