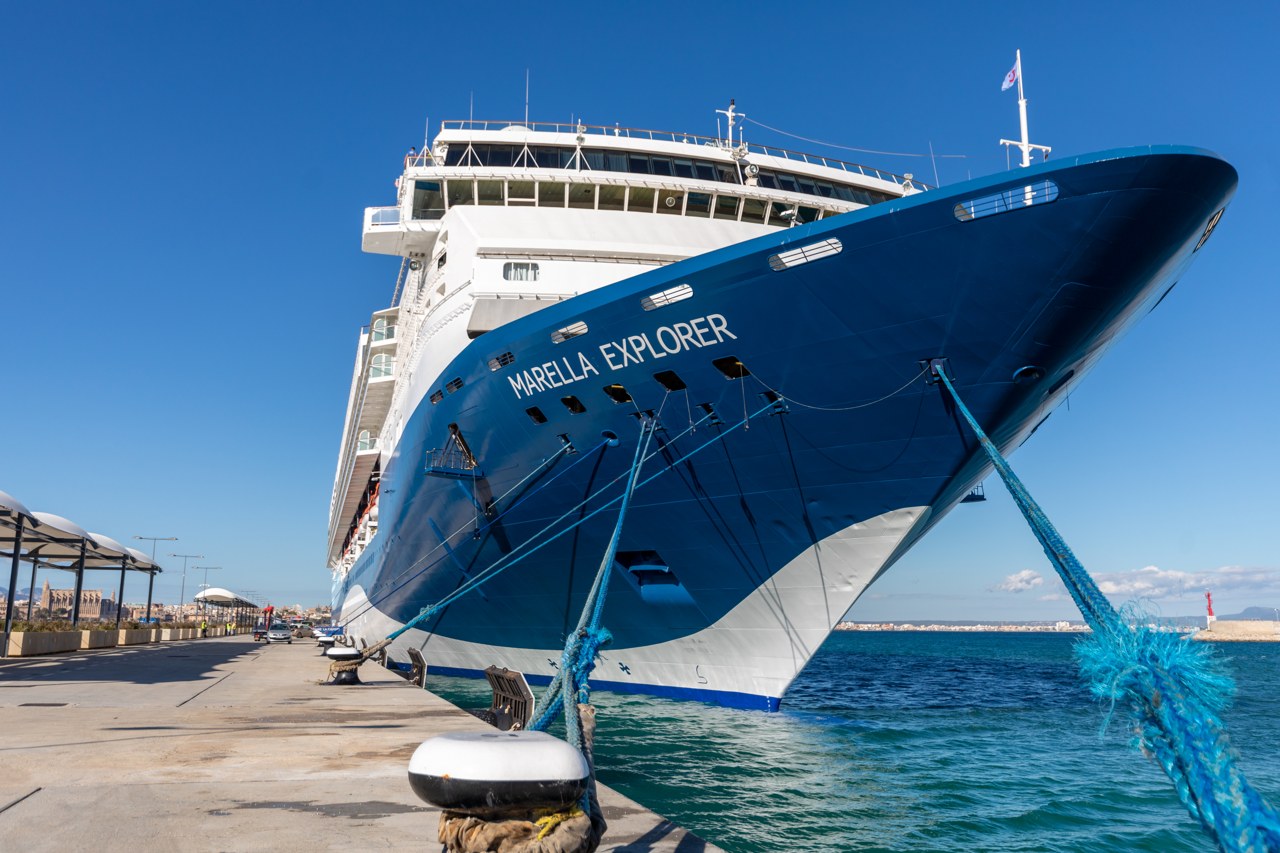 Marella Cruises is on the move. It used to be Thomson Cruises until a recent name change but it’s still part of the TUI holiday giant, using all its experience to make cruises simple and great value.

The result is a getaway that combines the reliability and ease of a package holiday with the style of a very decent cruise, something comforting for first-timers yet attractive to regulars. And prices are keen – and all-inclusive, so no surprise bills at the end.

Not new by any means, but in a good way. Marella Explorer has been cruising the world for 20 years but a major makeover has taken traditional elements – wooden columns and chunky steel fittings – and combined them with contemporary decor. There’s everything from hints of the 1940s and 1950s in the public spaces to fun seaside touches on deck.

Well, there are the hammocks on each balcony, which sets Marella Explorer apart. You can swing above as your partner soaks up the sun on the lounger. Not being a new ship, only about a third of the cabins have balconies; there are a number with windows and a fair few hidden away inside. All, however, are smart and modern and proud to be British with kettles – and Yorkshire tea bags. Bathrooms are neat if smaller than on newer ships.

Explorer is filled with jolly seaside touches, whether gaily-painted beach hut seats on deck near the corrugated iron casualness of the Snack Shack (burgers, pizza, etc), the stools with bicycle pedal footrests at the Scoops ice-cream wagon or the Caribbean feel of the faded wood décor of the large (and excellent) Market Place buffet (with everything from chips to curries, even kedgeree for breakfast). 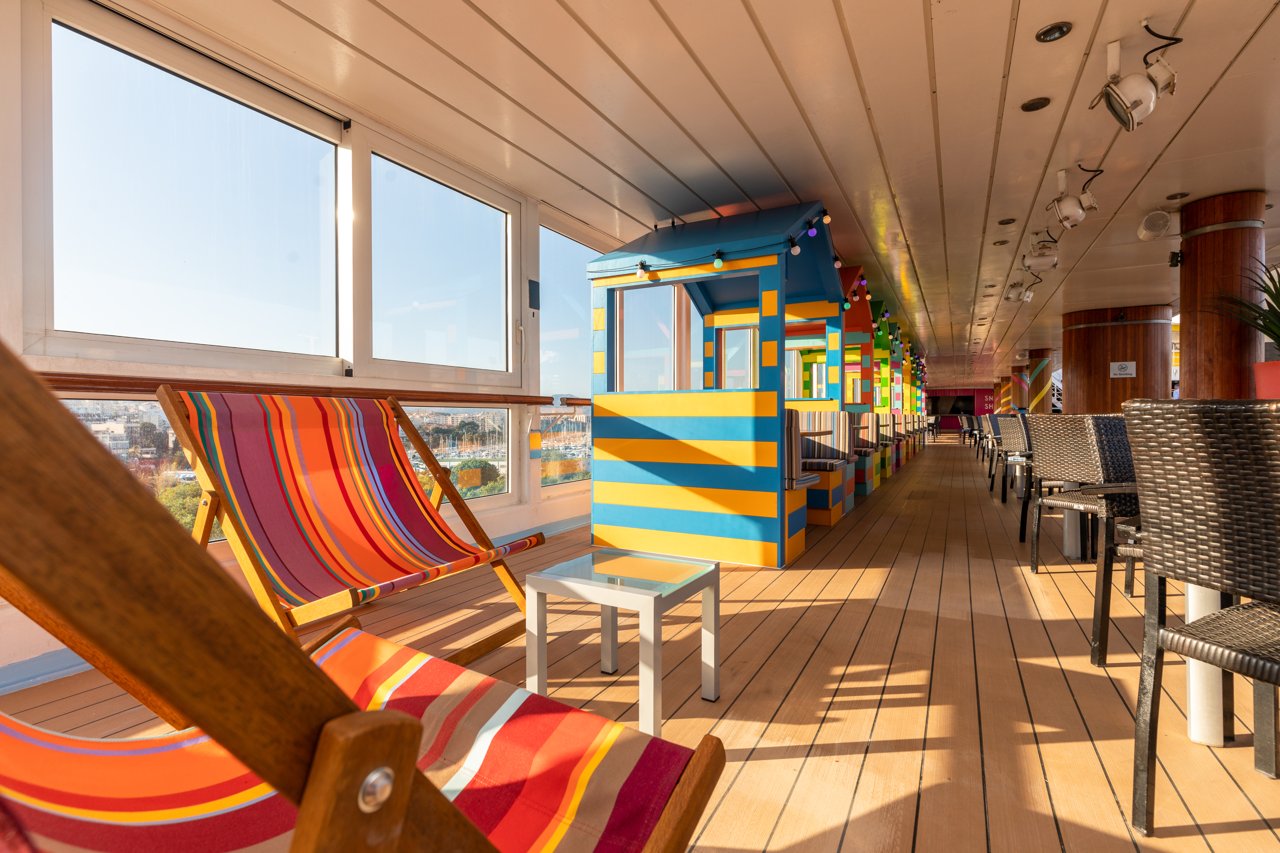 There are 10 restaurants, half of which are free. Included in your fare, along with the Market Place and Snack Shack are Latitude 53 (three-course dinners), Mediterranean’s pizza and Vista’s Italian cuisine. A cover charge (between £9.95 and £45) gets you the likes of Surf and Turf steakhouse, Umi Sushi and the French extravagance of the Dining Club, all polished wood with porthole-like windows.

Latitude 53 is impressive, a two-deck place (Vista’s occupies part of downstairs) with an open central area backed by a glass wall at the back of the ship.

Equally outstanding on the deck above is the Mediterranean, a conservatory with a retractable glass roof. Here there’s food (design your own pizzas) as well as drinks from the indoor/outdoor bar which passes out through the ceiling-high windows and also serves the terrace. 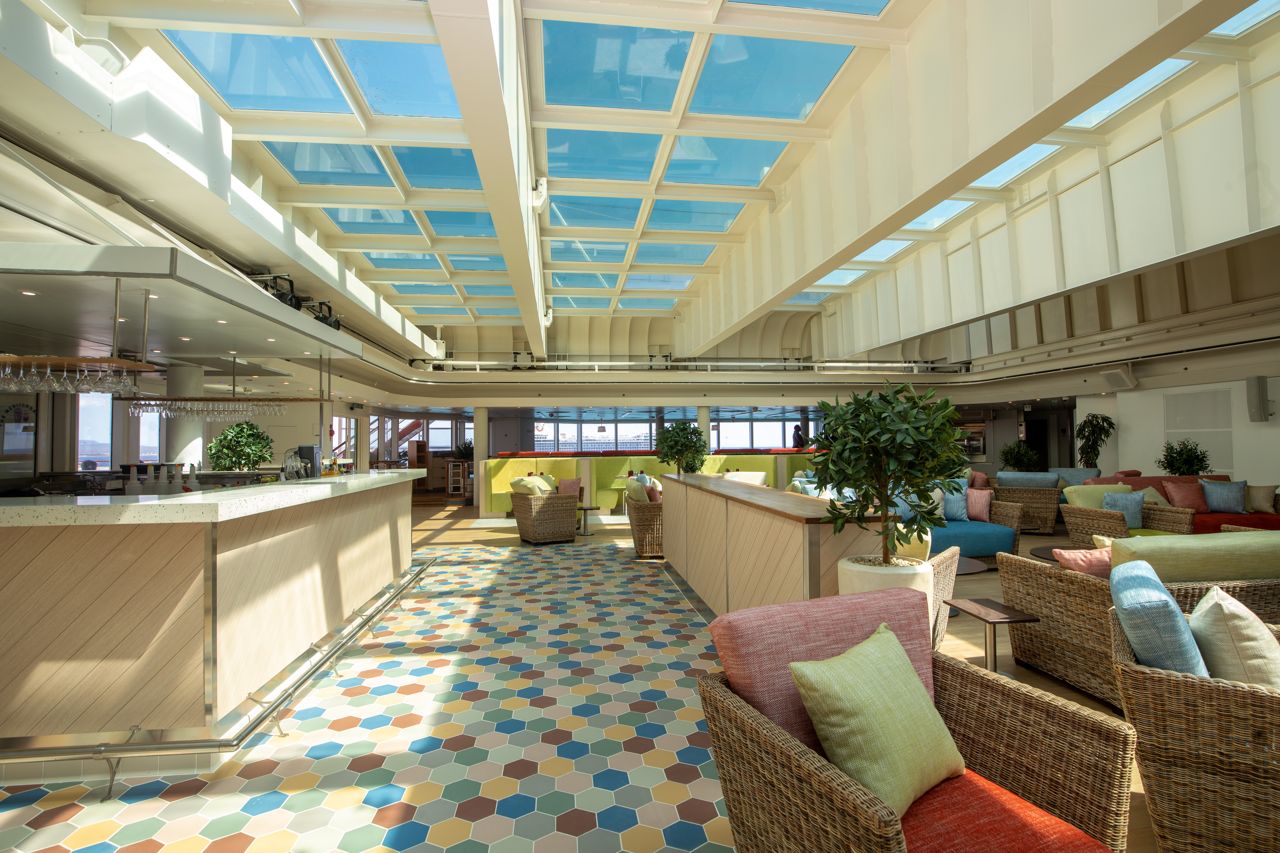 The front of the ship doesn’t lag behind with Indigo, a combination bar, club and casino. The bar has two-deck-high sloping windows across the width of the ship, the club is a near-circular industrial-chic space while even the gaming tables, set against the windows, look cool (rather than the flashing Las Vegas feel of so many ships). 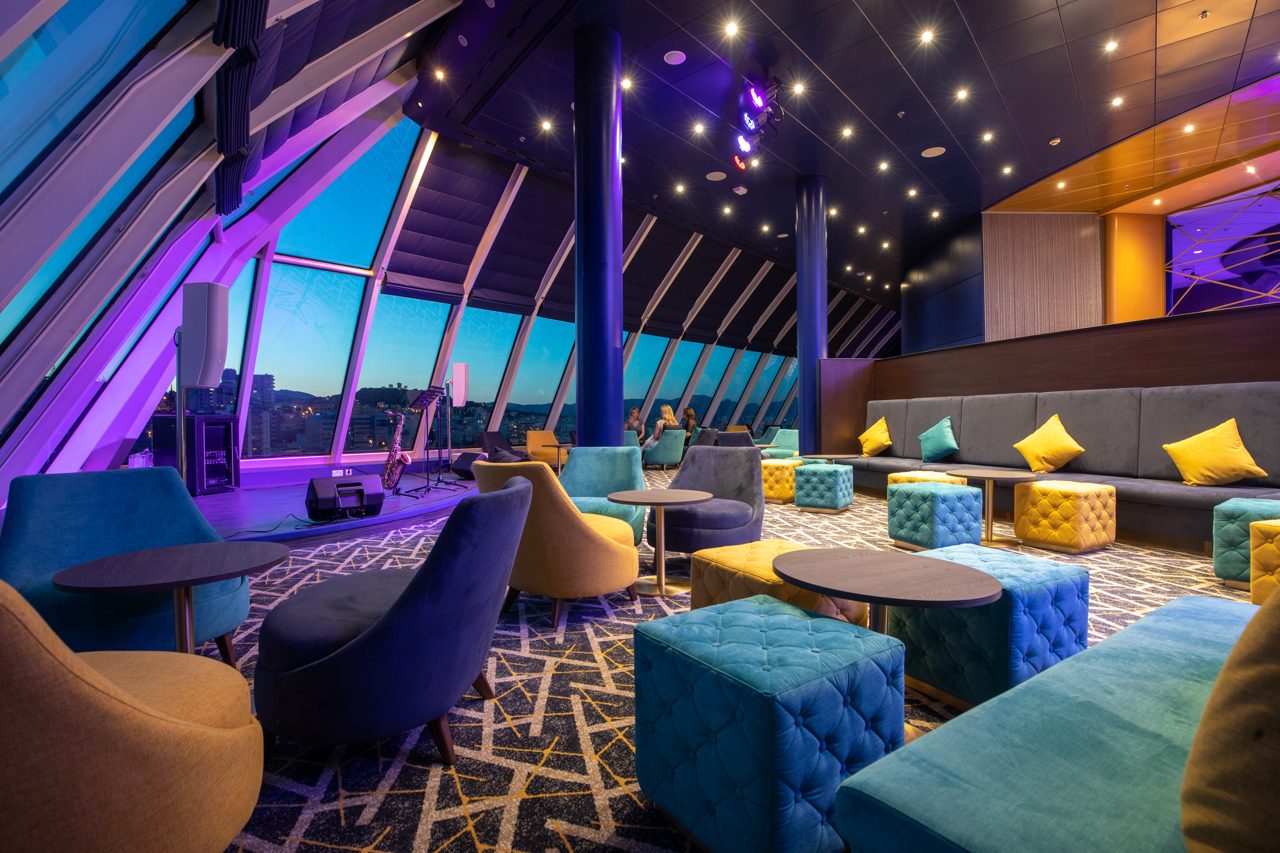 There’s plenty to do at night with a rolling rota of 12 shows in the swanky Broadway Show Lounge, so that even if you’re on a fortnight’s cruise you can see something different almost every night. It’s not just variety either – the list includes Rockology (a tribute to Fleetwood Mac and other bands), Bud’s Diner (the 50s), Festival (music from Woodstock to Glastonbury), plus soul, musicals, even a family-friendly sing-song.

And the ship is great for families even if there are none of the go-karts or water slides of modern resort ships. The family deck is a quiet getaway with mini-golf and a volleyball/basketball court, and there’s a cinema with the latest movies (films are on the in-room TVs too). The M Club runs free sessions for children aged three to 11 Hideaway club caters for older children and teenagers with video games and double-width hammocks on deck.

Adults have plenty for themselves as Marella Explorer features the first Champneys spa at sea. The £15 daily charge to get into the Thermal Garden with steam rooms and a truly impressive sauna that’s not only huge but has picture windows out to sea.

The Veranda, snuggling at the front of the ship, is an outdoor (paid for) hideaway with double sun loungers and private cabanas. 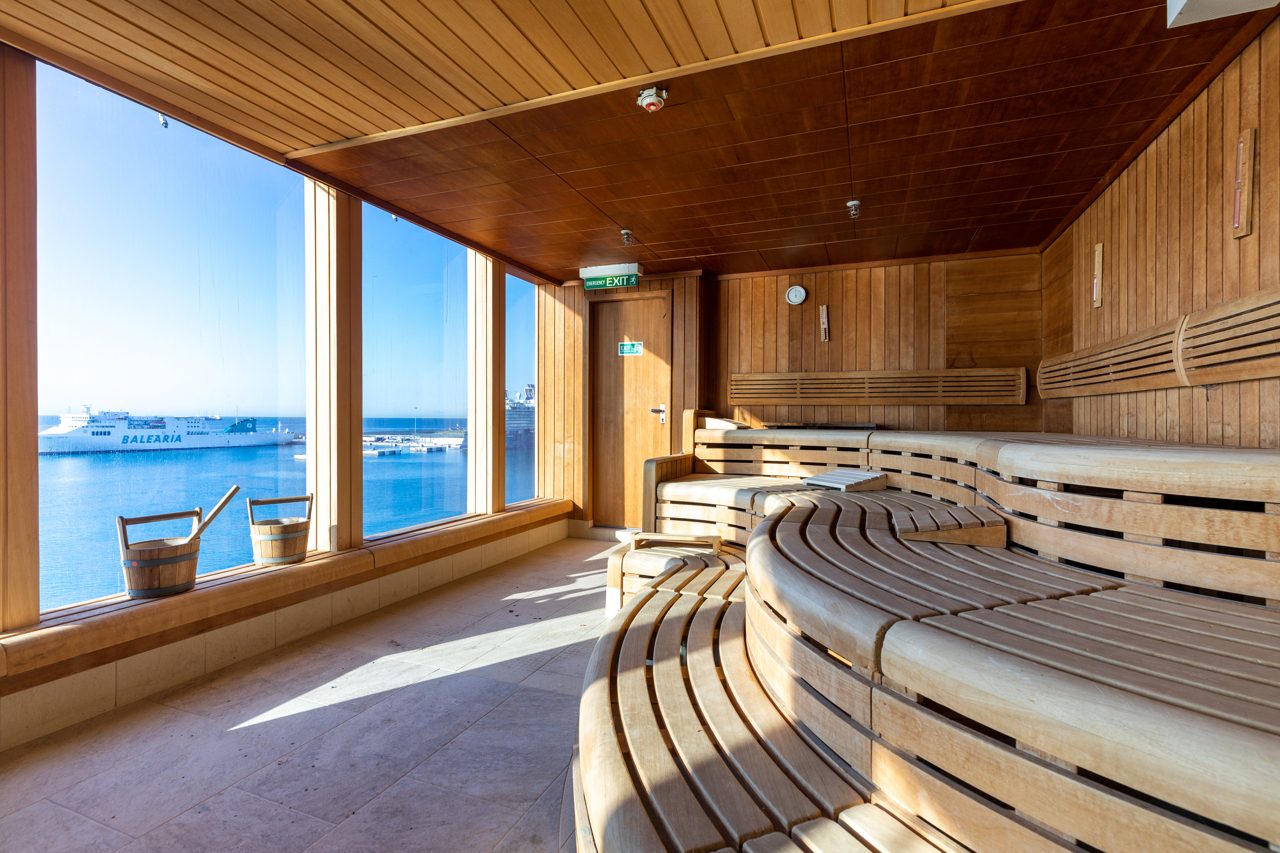 And, of course, there are bars, 10 of them, from the airy feel of the Mediterranean to the curious Bar 53, a three-deck-high affair, slim but with pianist and seats facing a shimmering wall. The Lounge is a ship-wide piano bar with the bar itself snaking around the centre while the Squid and Anchor features bands and quizzes (in the corner is a posh bar area featuring top gins and whiskies at extra charge). 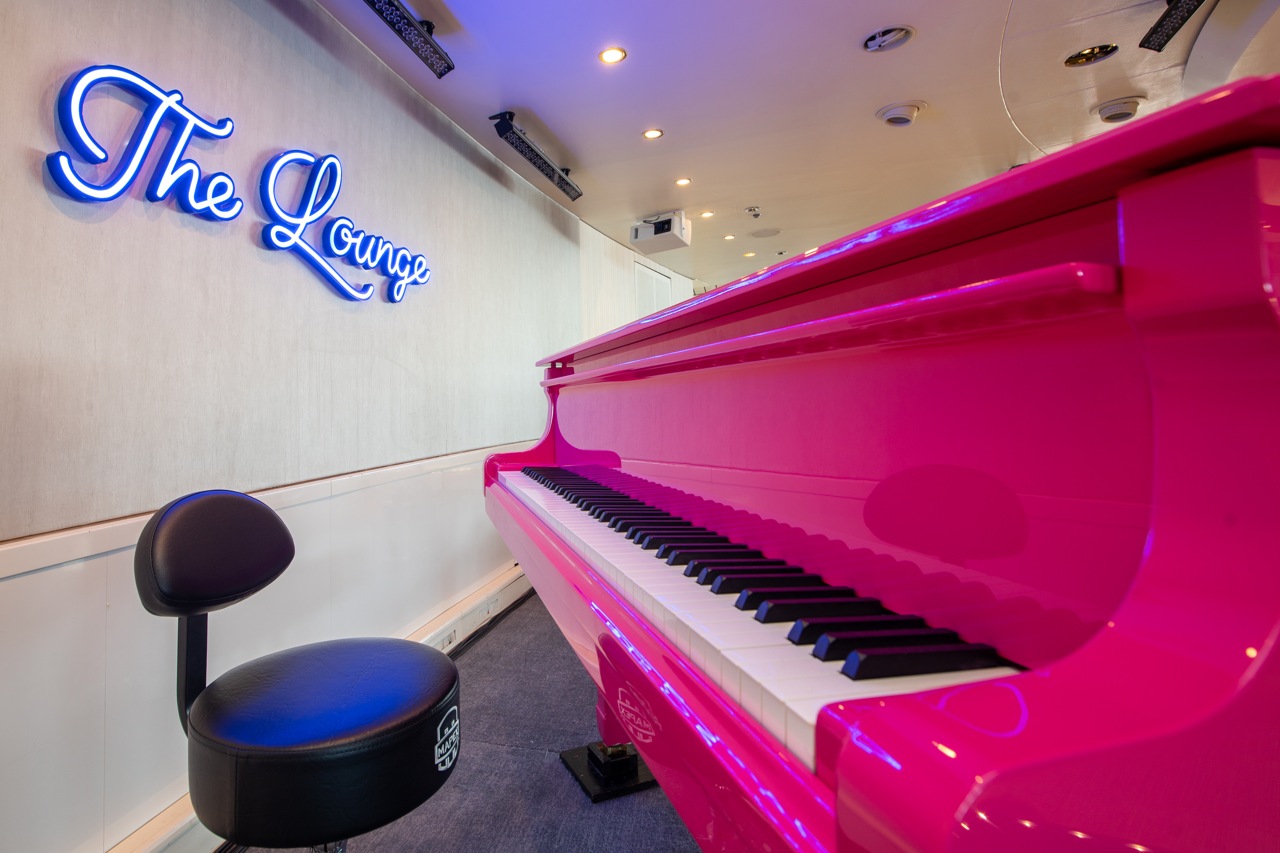 A superb holiday experience with a great deal of style. Flights are included and, unless you want to, there’s no need to spend a thing once you’re on board. Cruises will be around Spain and the Med all summer, sailing from Palma, and in the Caribbean, from Barbados, all winter.