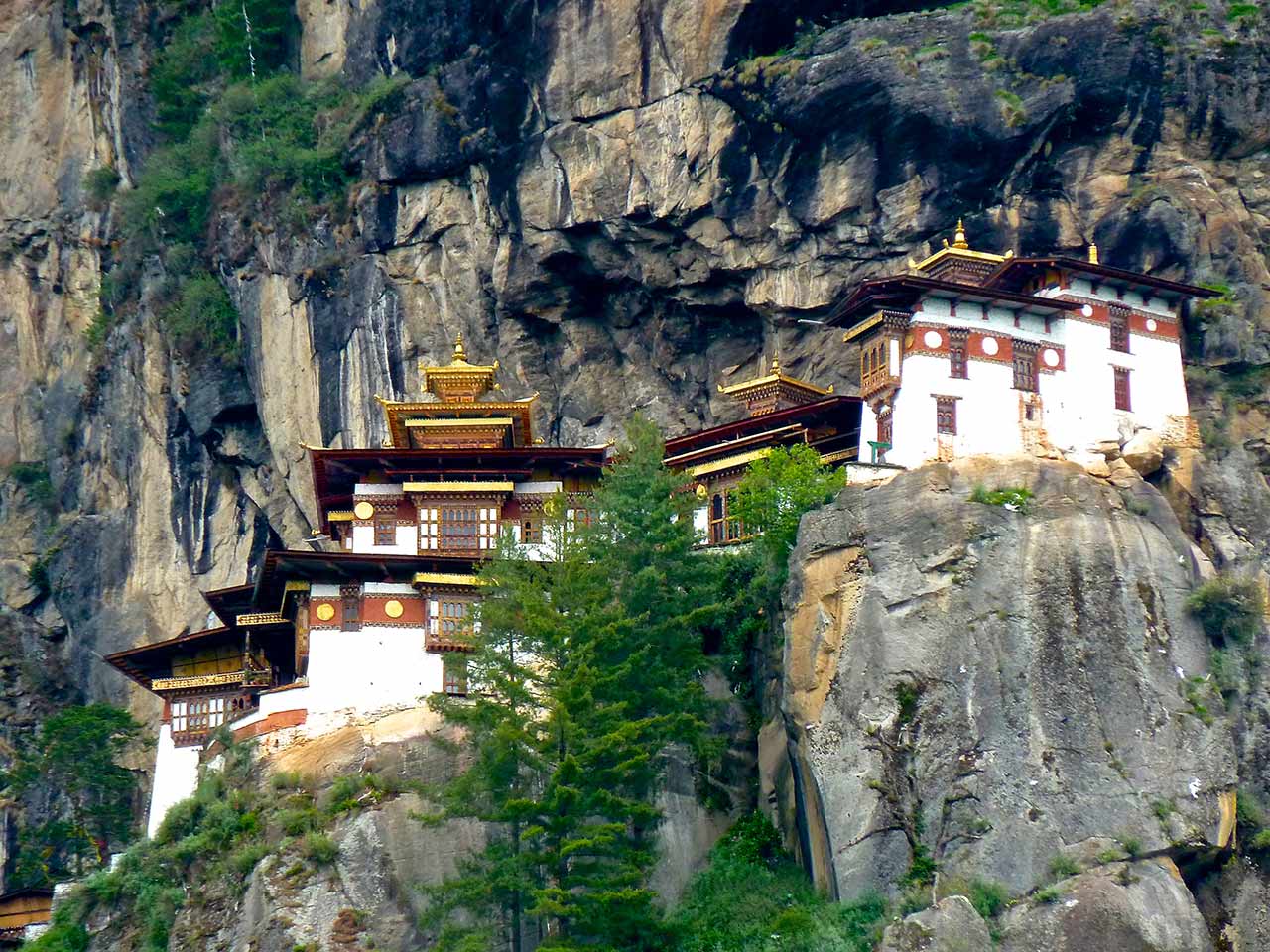 Bhutan is a small kingdom wedged between two mighty countries, India and China, in the shadows of the Himalayas. It is a country steeped in Mahayana Buddhism, myths and legends under the sovereign rule of the Wangchuck Dynasty. The magnificent landscape is picture perfect with majestic mountains sweeping down to lush valleys carved by cascading rivers.

Locals still wear their national costumes as their daily attire with pride and success is measured via the Gross National Happiness index because here the welfare of the people is paramount. 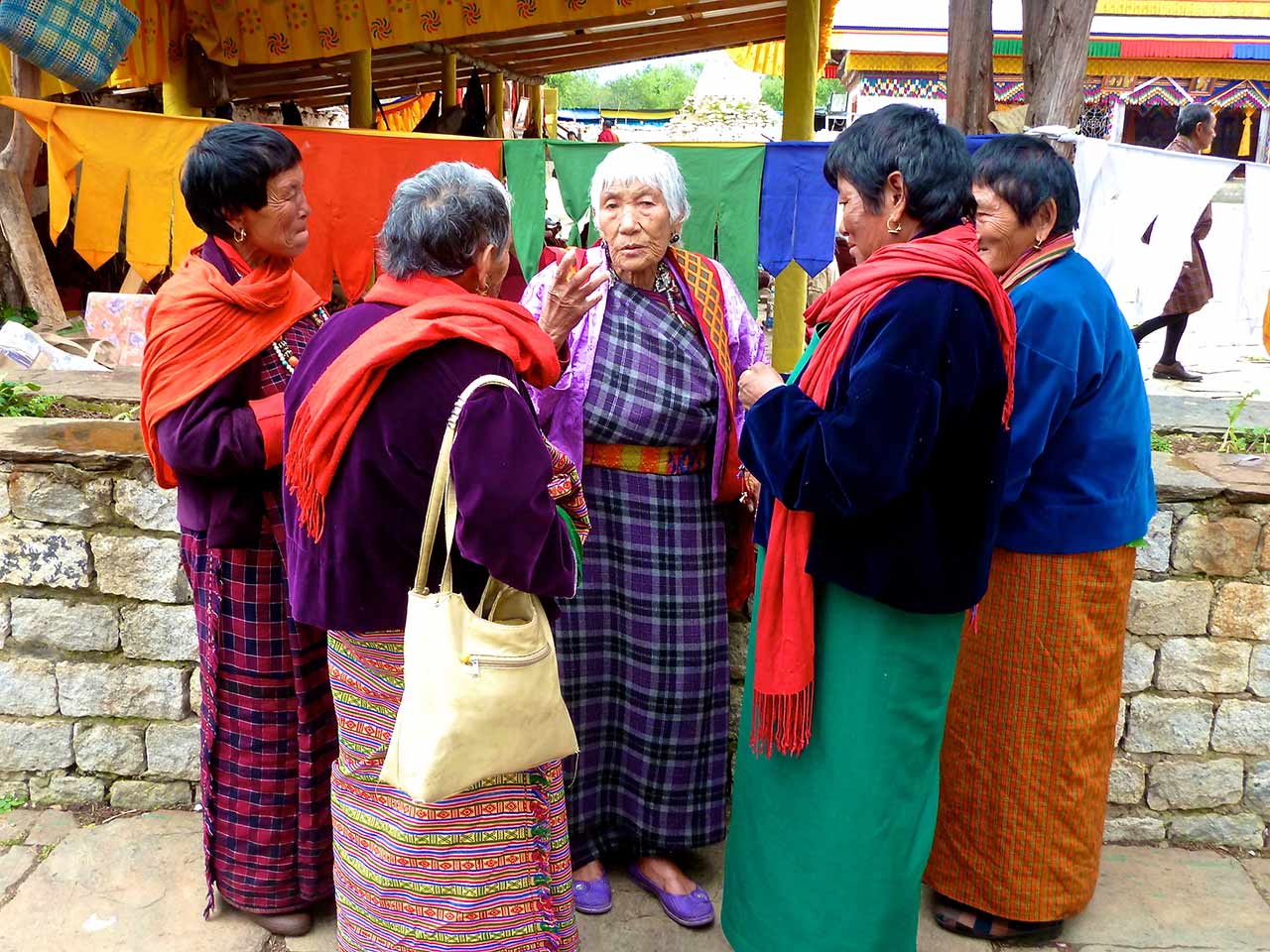 Locals still wear their national costumes as their daily attire

Bhutan has never been big on tourism and slow to progress. The internet only arrived here in 1999 and it’s infrastructure is still a work in progress.

Thimphu – the capital of Bhutan

Thimphu the capital city has no skyscrapers or traffic to blot its cityscape. The mini roundabout is a pavilion with statues of goddesses while policemen physically conduct the traffic instead of traffic lights. 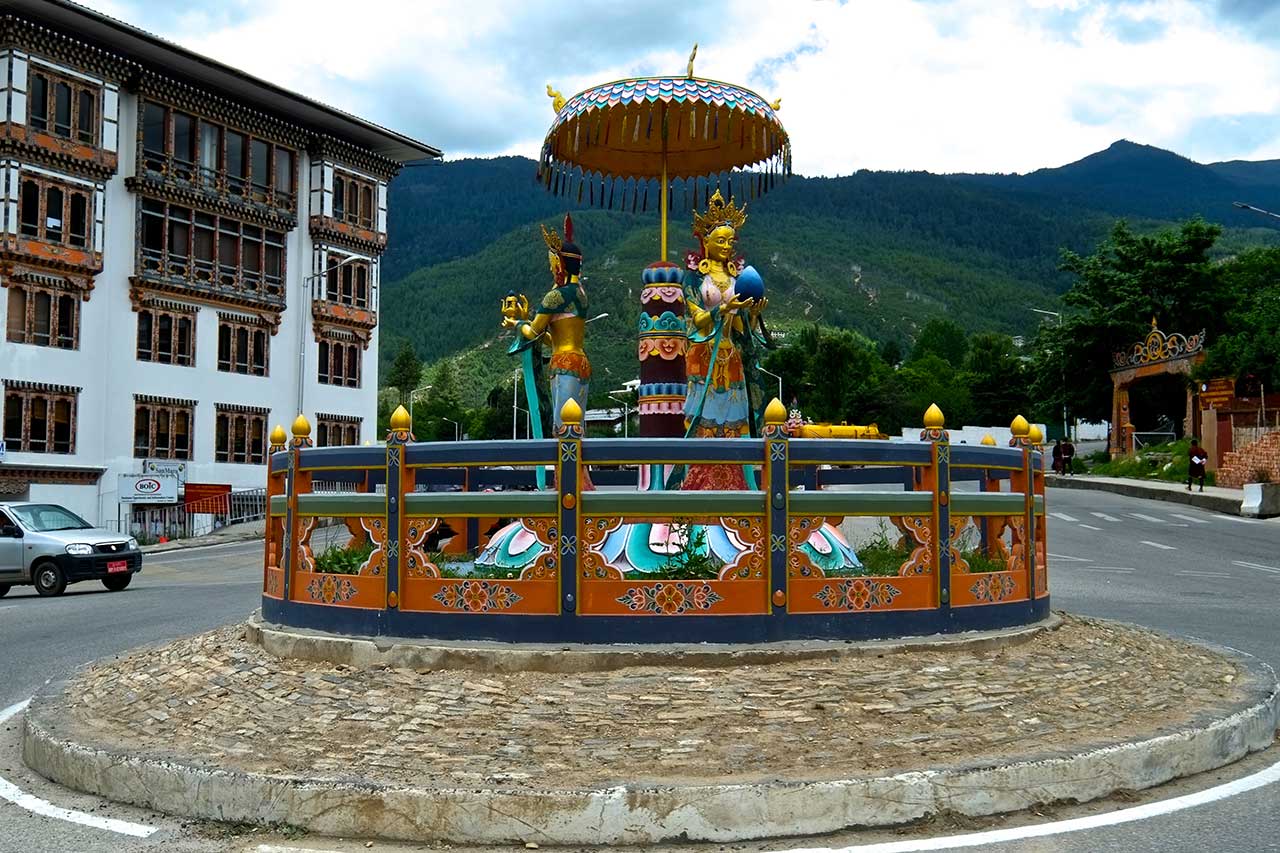 The mini roundabout of ornate pavilion with goddesses in Thimphu

There are hints of modernity creeping in slowly with new buildings but this is tightly controlled by the government who insist that they be inkeeping with Bhutanese tradition. 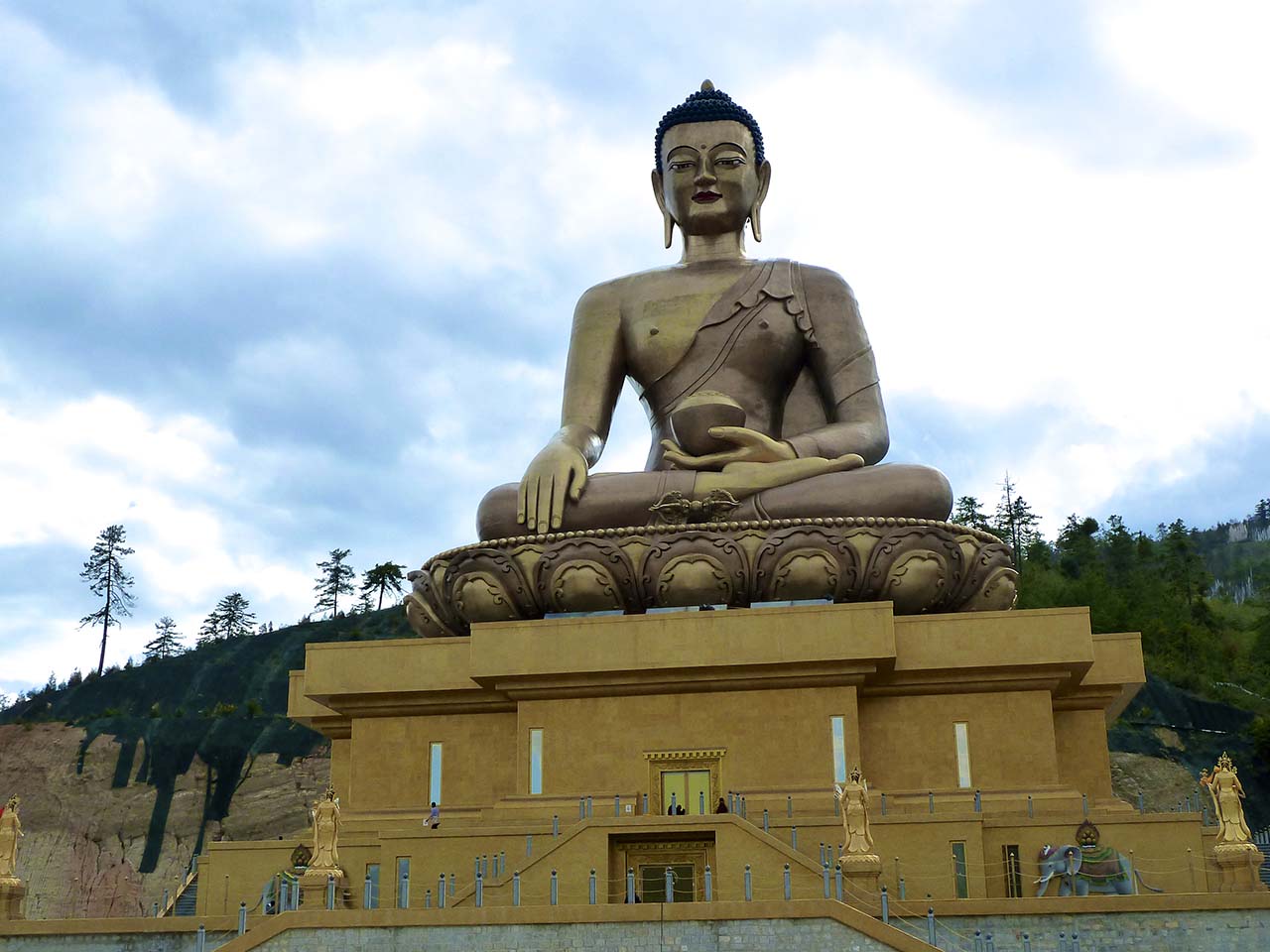 The colossal Dordena Buddha in Thimphu

On a hill overlooking the city, the colossal Dordenma Buddha statue of 51.5m high cast in bronze and gilded in gold is like a spiritual beacon to the people. Dzongs (a type of fortress), which are found everywhere in the country, were built in ancient time as fortresses and monasteries. Today they are used as monasteries as well as government administration offices.

Punakha District – the heart of Bhutan

Travelling into Punakha, the old capital, the heart of Bhutan, is on bone-shaking unfinished road hewn out of the mountainside. The scenery is the jaw-dropping natural beauty of the country which unfolds at every turn of the road. Prayer flags are installed everywhere to send prayers to the universe. 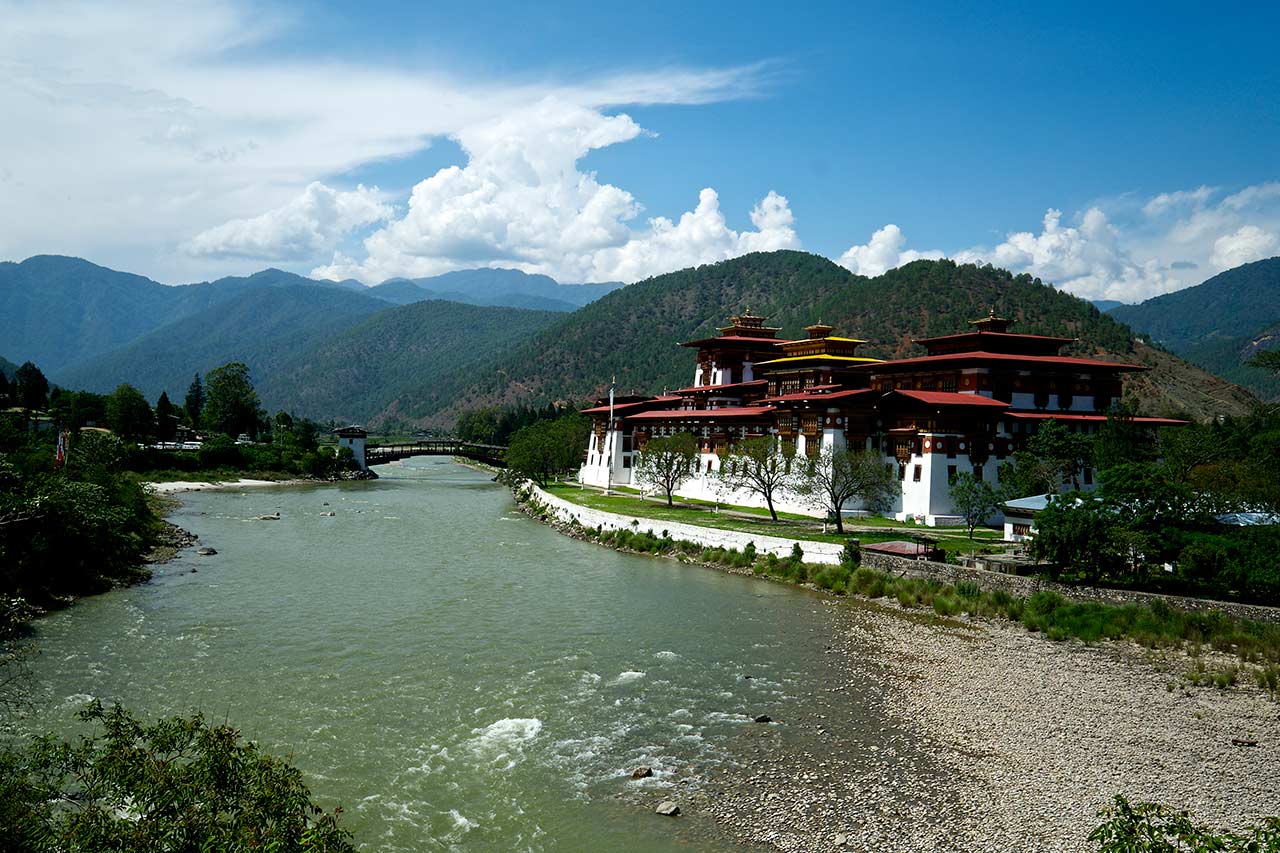 Punakha Dzong, also known as Palace of Great Happiness, was built in 1637 by Zhabdrung Ngawang Namgyal. He was a Tibetan Lama, who unified Bhutan as a nation-state and instilled a unique cultural identity. The mighty fortress has glorious allegorical frescos, intricate artwork and carvings and houses the most sacred relic known as Ranjung Karsapani and the resting place of Zhabdrung’s embalmed body. 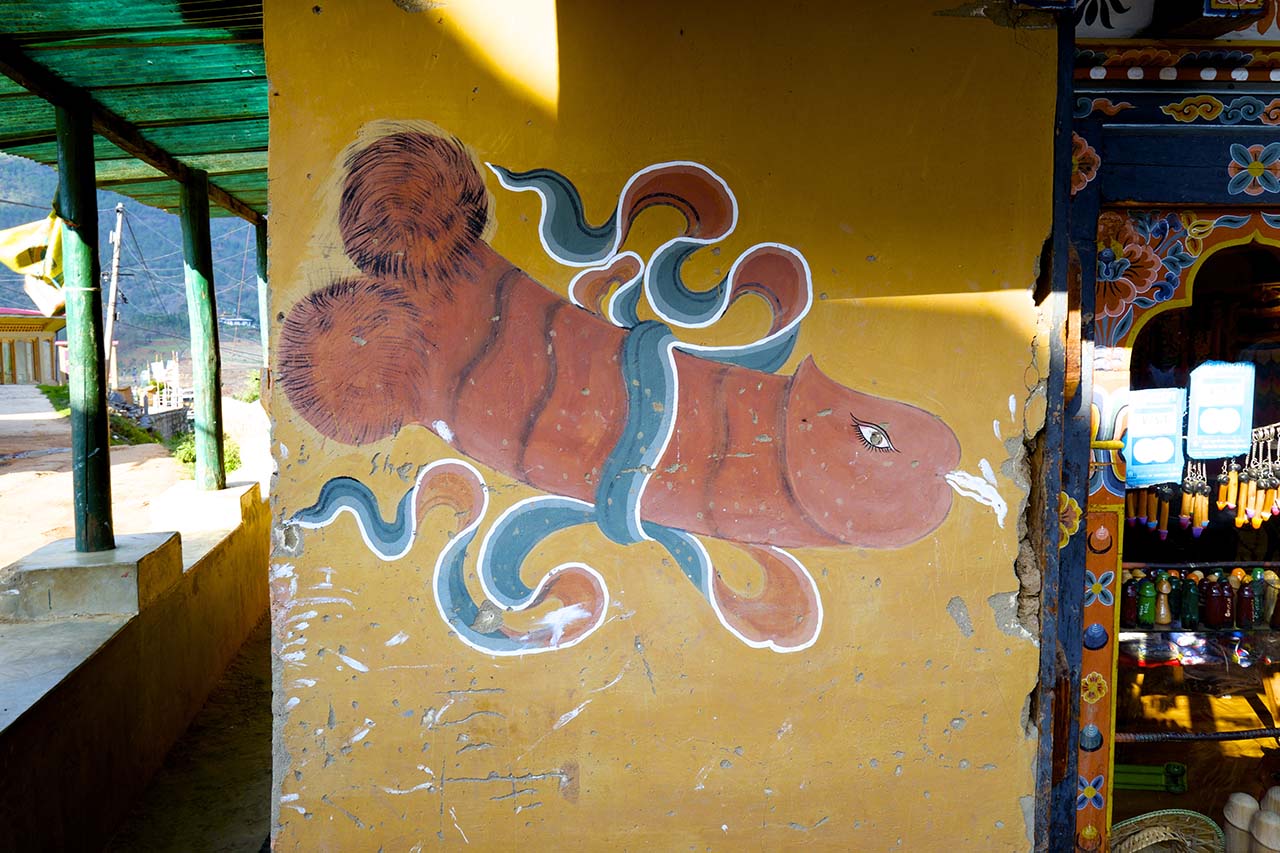 The most esoteric temple in the Punakha District is the fertility temple of Chimi Lhakhang where the phallus symbol is worshipped notably by women to beget children. We walked through the village amidst rice fields where every house has a phallus image painted on the walls for good luck. The gift shops sell penis talisman for fertility much to the amusement of tourists.

Valley of Phobijkha – flight of the cranes 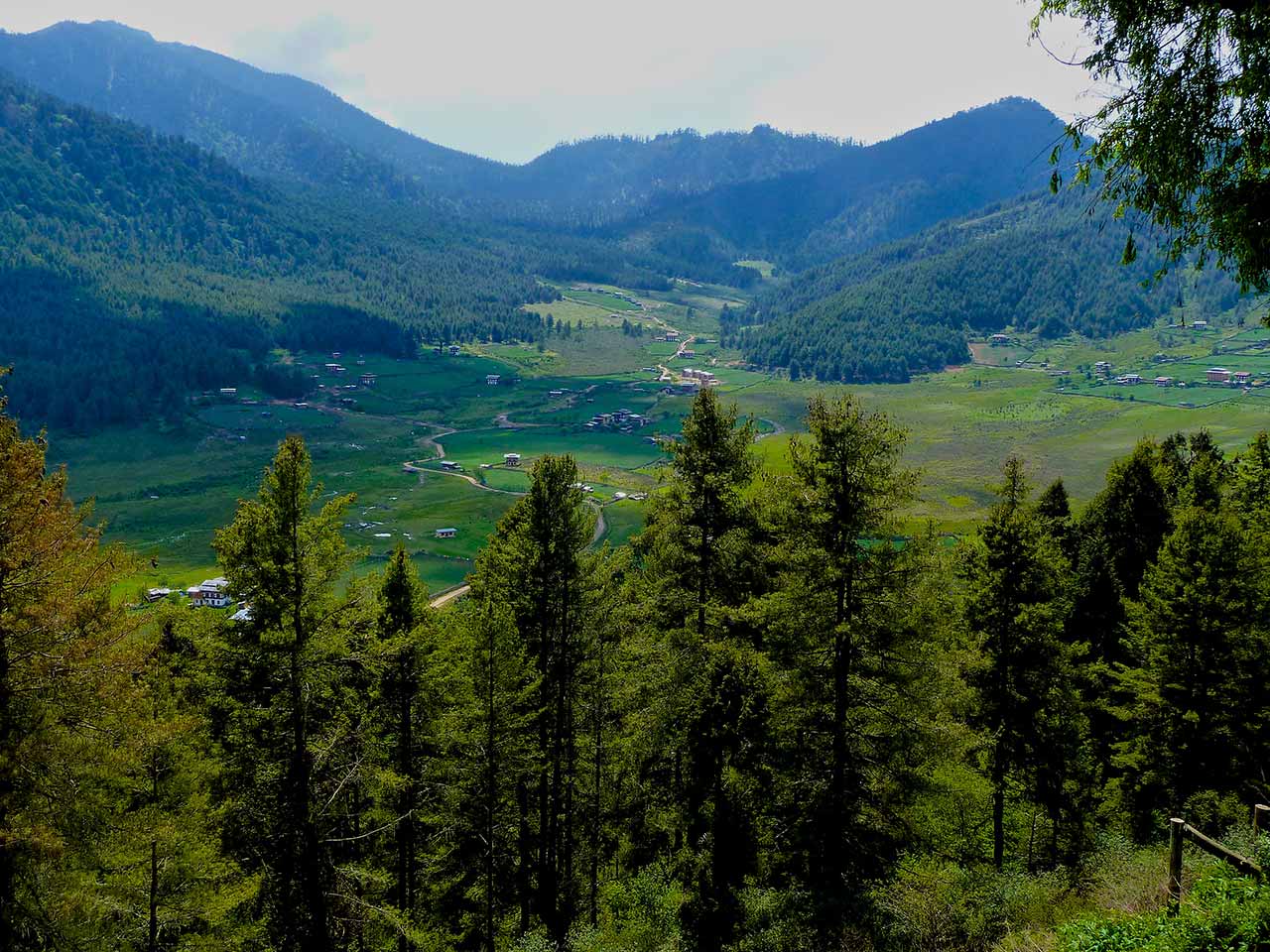 The stunning Phobjikha Valley of the Black necked cranes

The valley of Phobjikha is a breath-taking vista where the wide sweeping valleys are flanked by lofty mountains. It is a vast wetland that welcomes the annual winter migration of the rare and endangered Black-Necked Crane where hundreds flock in from the Tibetan Plateau in late October till mid February for their winter roost. 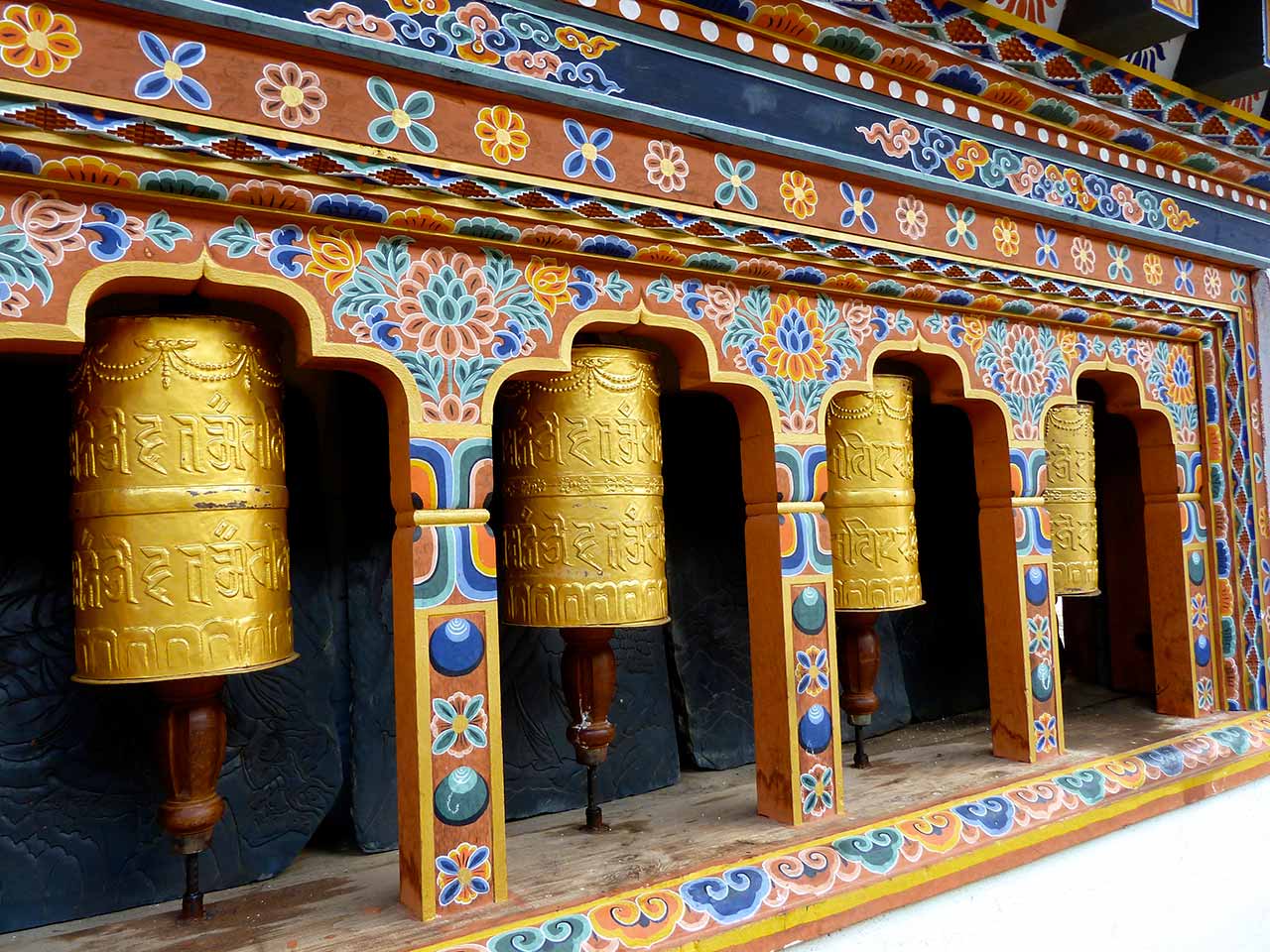 This natural wonder is celebrated with the Black-Necked Crane Festival in November every year with crane-themed dances, folk songs and drama performances in the Gangtey Monastery. The ancient monastery sits atop a spur overlooking the stunning valley and houses a Buddhist school and prominent religious iconographies. It is said that the cranes circumambulate three times in their flight over the monastery on every arrival before landing on the wetland nearby and do the same on their return flight as if to pay respect to Gangtey Monastery. 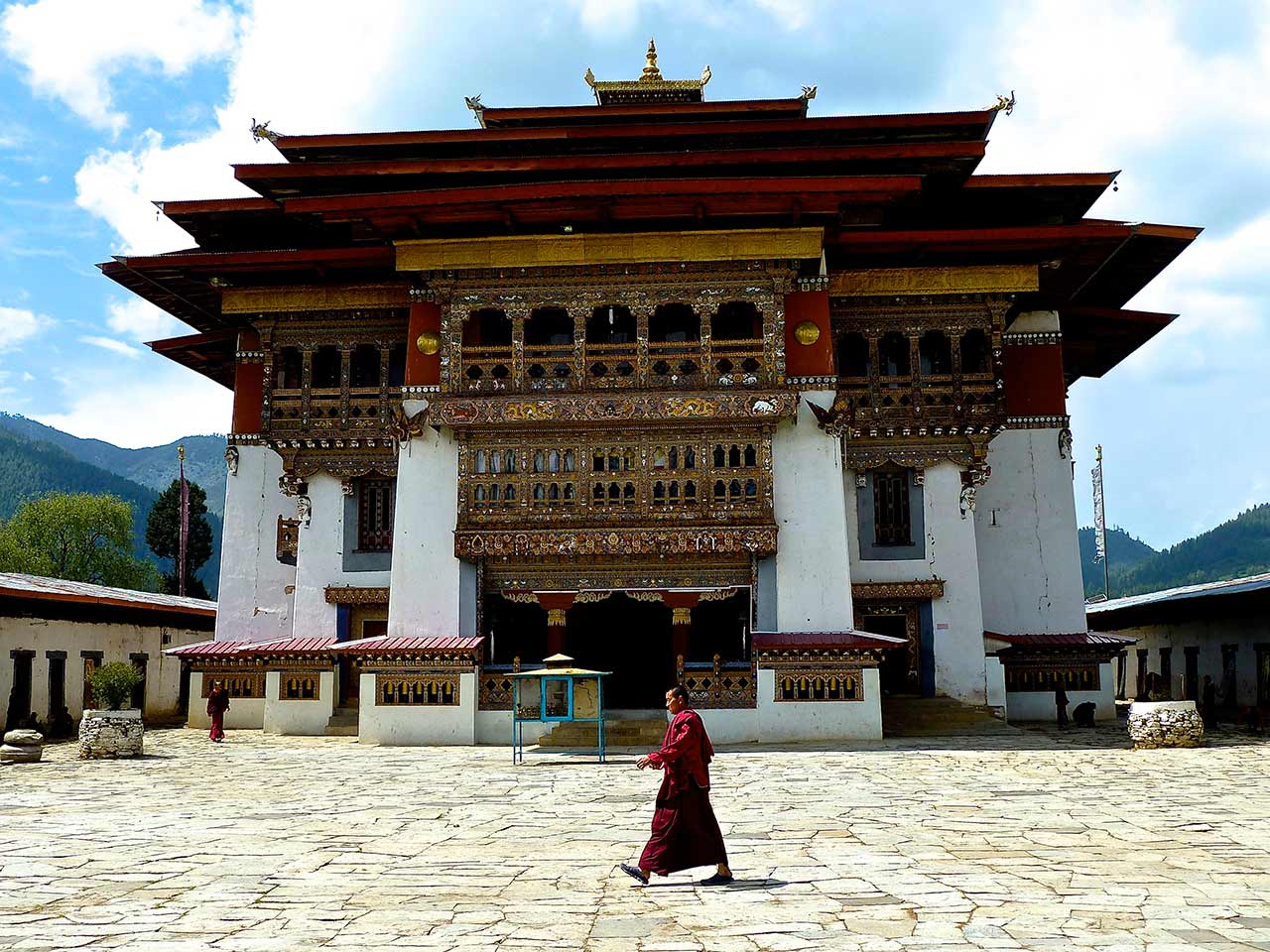 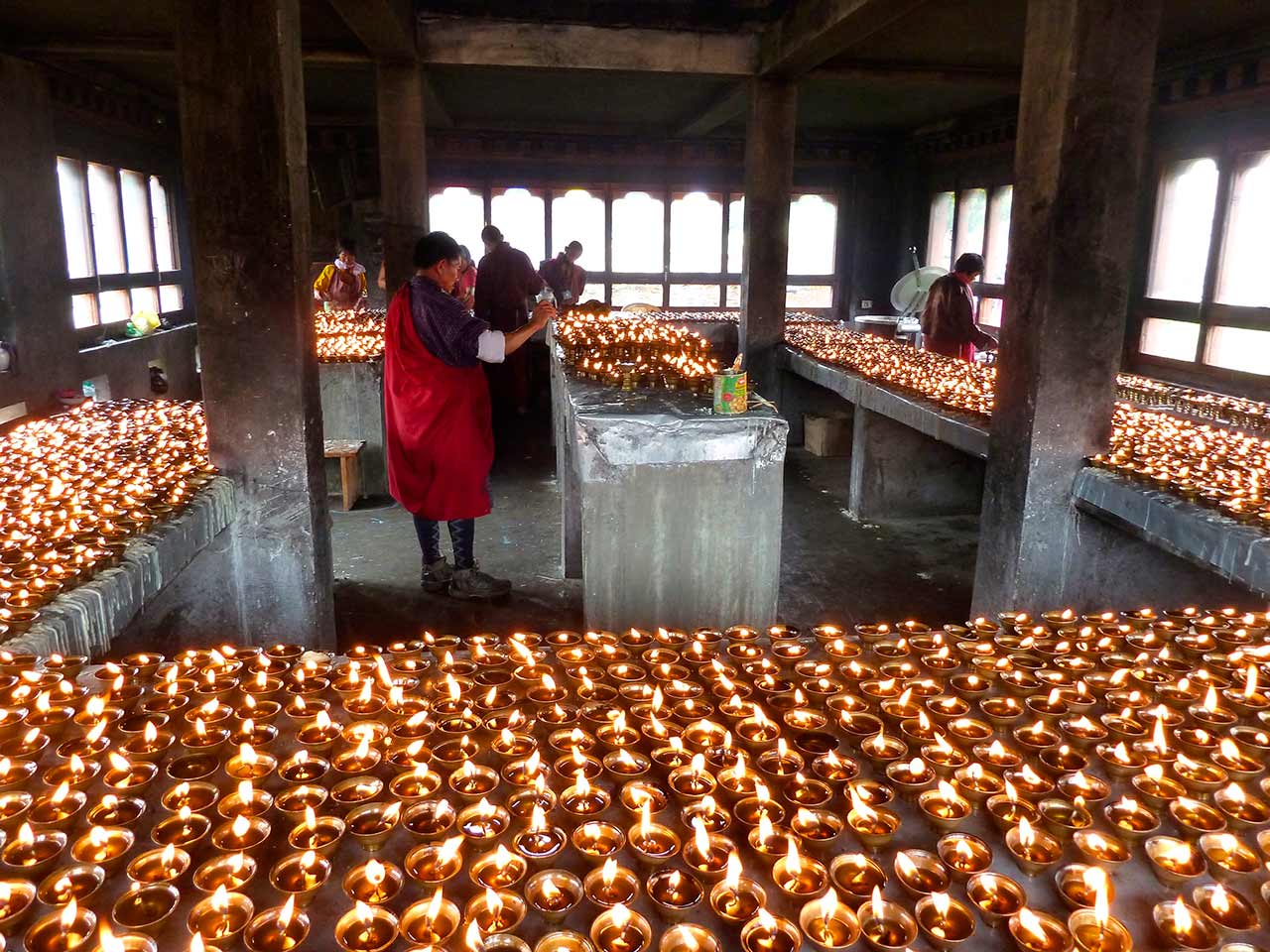 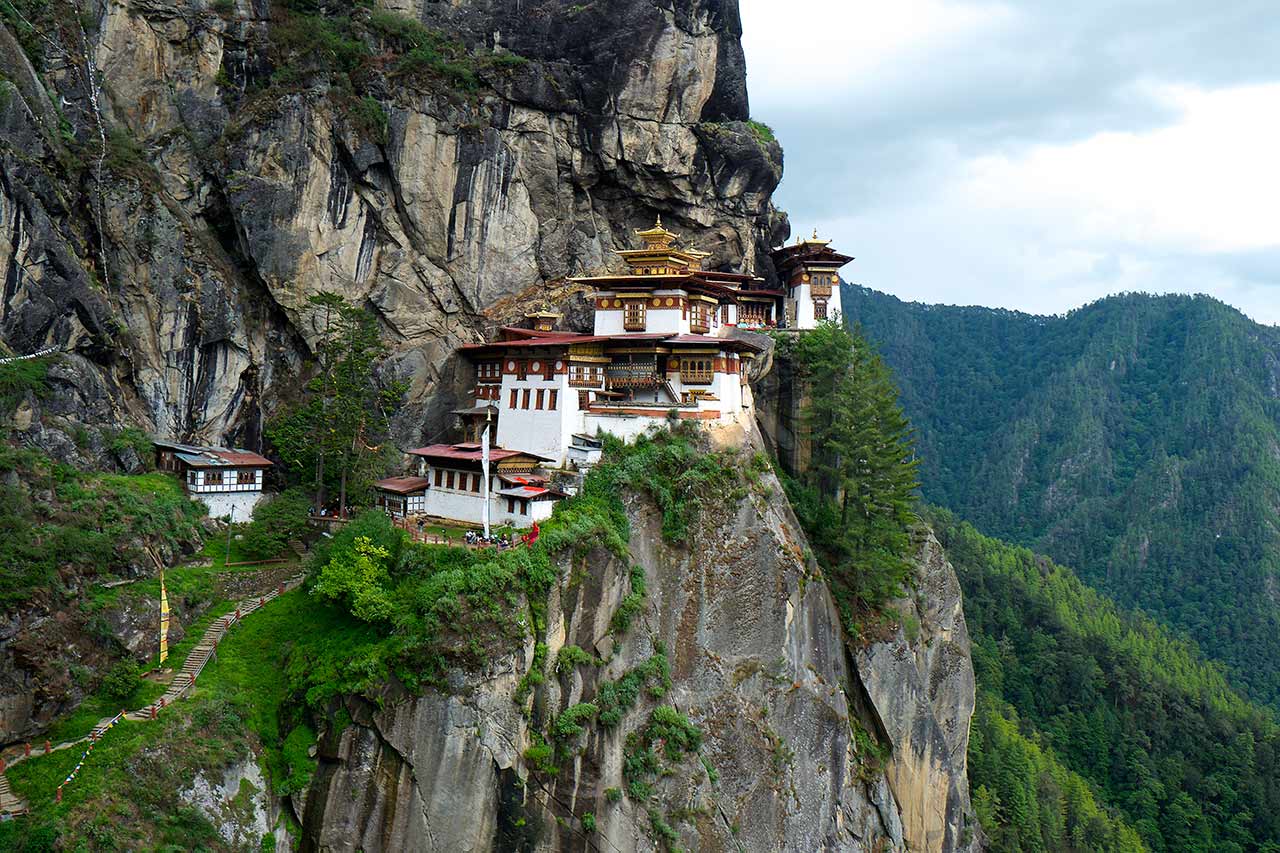 The ascent to Taktsang Lhakhang, the Tiger’s Nest, revered as the country’s most sacred site and iconic landmark is the climax of most visitors to Bhutan. Legend has it that their most revered saint Guru Rinpoche, flew to the mountains on the back of a celestial tigress in the 7th century at a time when the area was abound with demons to harm people.

He meditated in the cave for three years, three months and three days to subdue the evil spirits living in the caves. The temple was first built in 1692 to consecrate the sacred site and ever since it has been a place of pilgrimage for Buddhist saints, monks, devotees and a major tourist attraction. 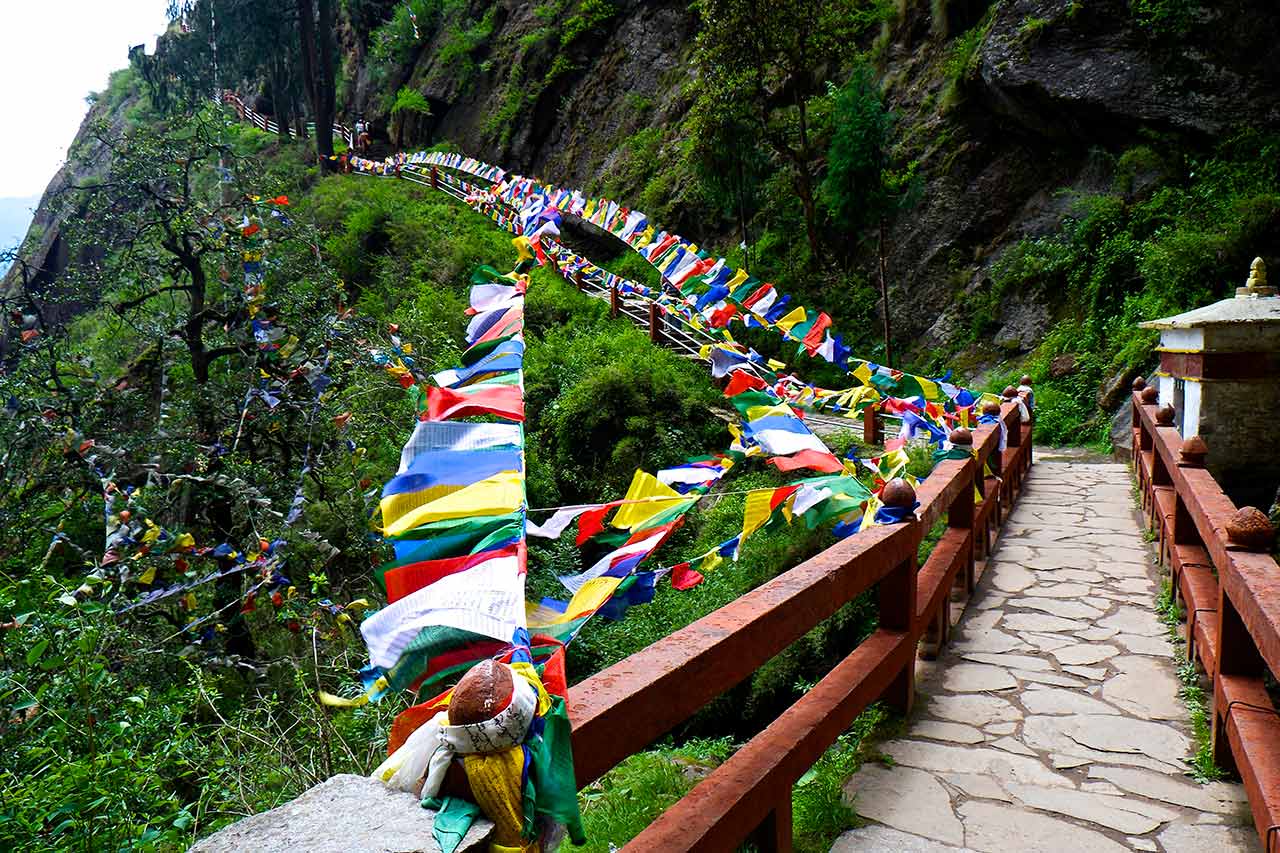 The final steps to Tiger’s Nest festooned with prayer flags

The mountain is over 3,120 metres high and the temple is 900 metres from the car park. The path varies in steepness along the way, hugging the mountain ledge overlooking a picturesque valley of blue pine and rhododendrons. After the cafeteria half way up, a stretch of steep climb reaches the view point where a long flight of steps leads down to an iron bridge by a waterfall and then another tortuous flight of steps take you up to the temple complex. The path is festooned with colourful prayer flags fluttering in the wind. As in all Dzongs and temples, shoes have to be removed before entering and photography is strictly forbidden. Cameras and phones have to be surrendered at the security checkpoint at the entrance of the temples.

Bhutan is, after-all, about spiritual journeys and trekking in the wild terrain with the mystic of Shangri-La.

Bhutan can only be visited with prior arrangement with a tour operator for a minimum package from US$200 per day that includes hotel, guide, land transport and meals.
Check out information and formalities of visiting Bhutan with Tourism Council of Bhutan

Drukair is the sole airline that flies to Bhutan

We reveal the 10 best value cities in Europe