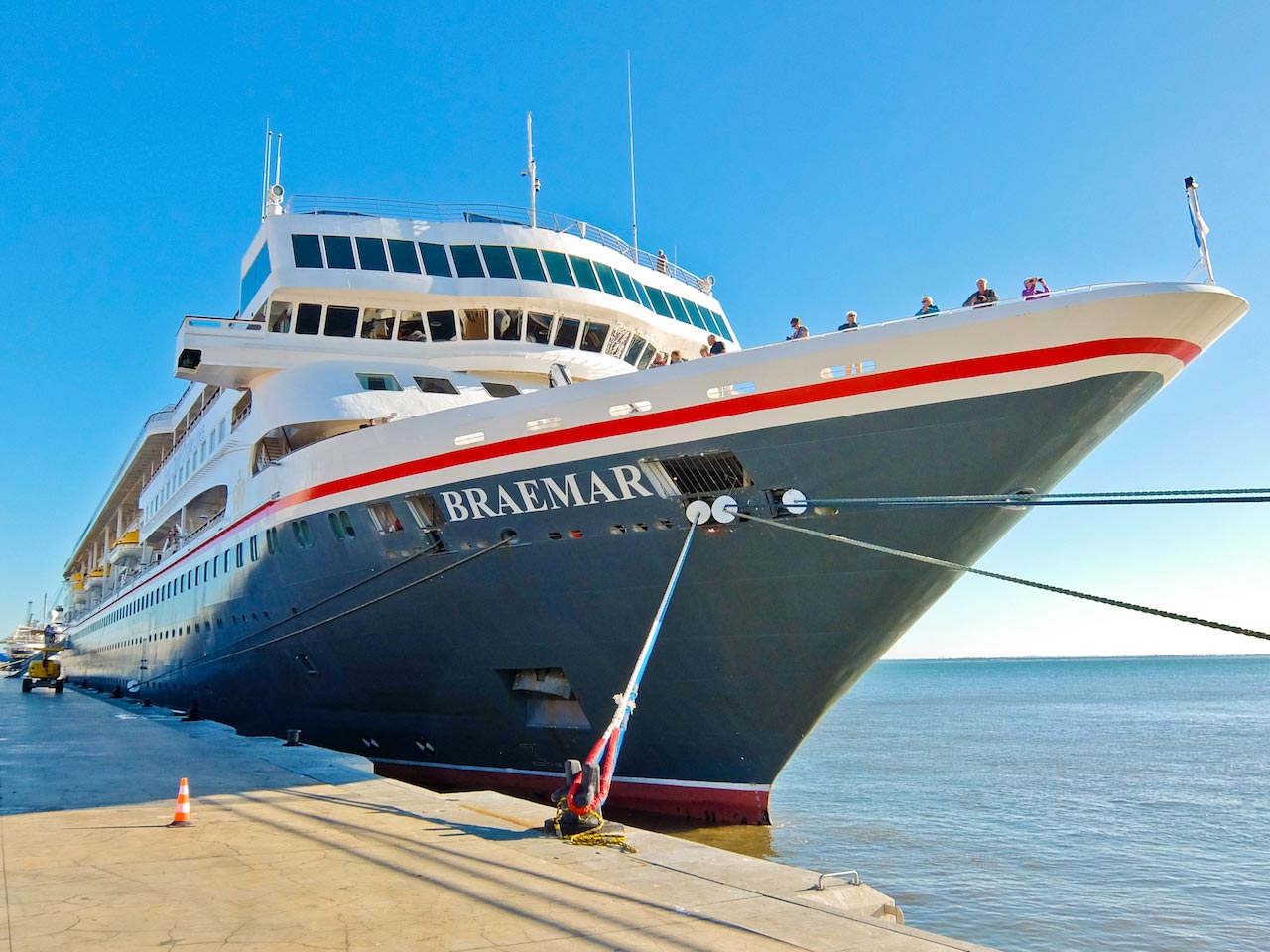 It’s a chilly November day when I arrive at the quayside in Southampton to board the Fred Olsen ship, the Braemar.

Lisbon will be the first port of call but it will take two days sailing to get there. I wait patiently in the embarkation lounge until my number is called and then swiftly make my way to the cabin on deck 6. They’ve upgraded me and I’m right at the front with a large window overlooking the bows. There’s one double bed, enough hanging space, and dressing table right by the window, as well as two armchairs.

Braemar has three restaurants, Thistle, Grampian and The Palms and I’m heading to dinner in the Thistle. This is the largest and I’m shown to a large table with other singles who I’ll get to know very well over the next few days. There’s a choice of two starters, three soups, two salads and four main courses, plus fish of the day and a British speciality. The food is good, waiters are friendly and they keep the wine topped up. 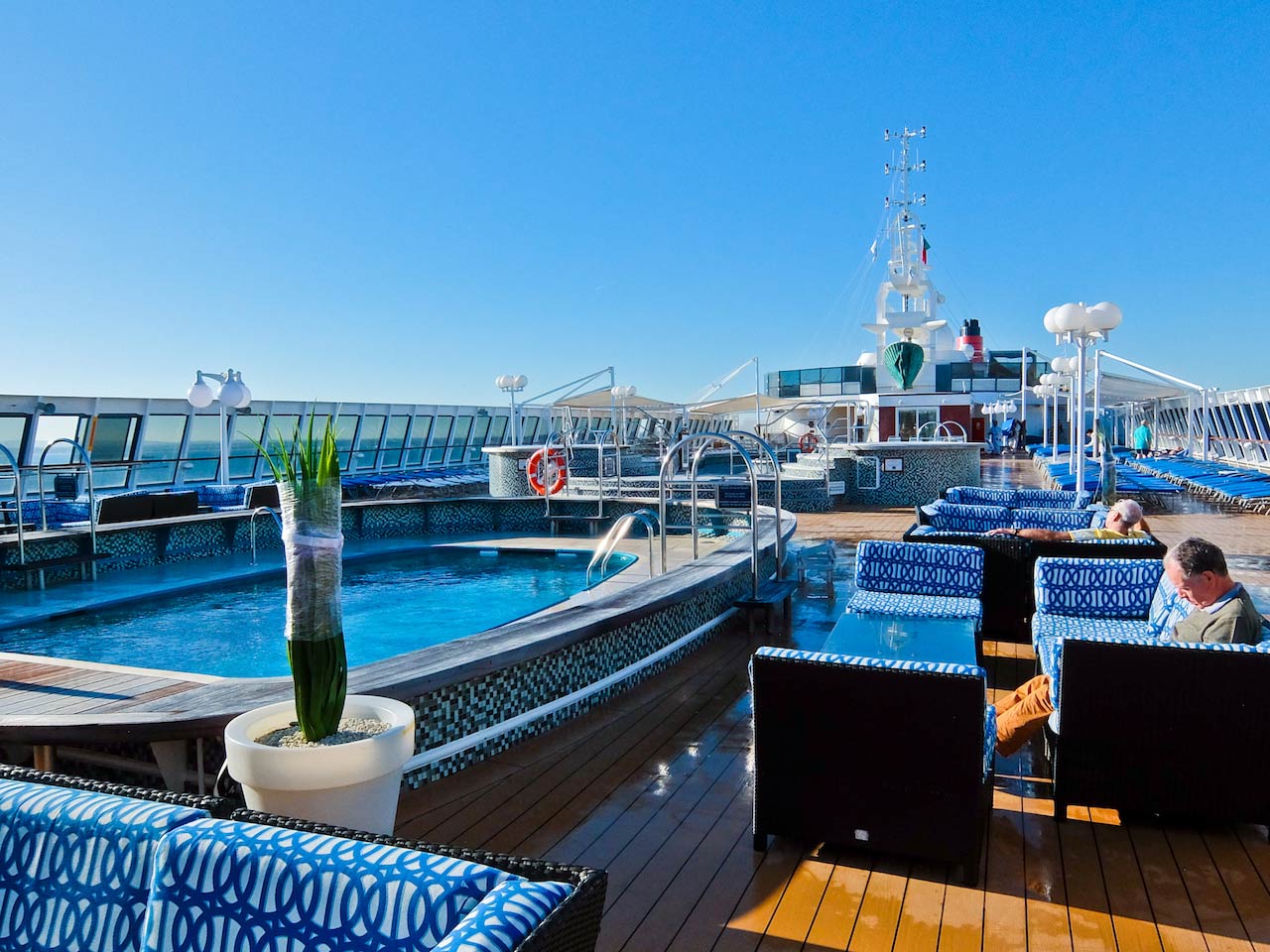 This is my first cruise on a large boat, although the Braemar is smaller than most, at a little over 24,000 tonnes and holding only 930 passengers. There are eight decks with the top one containing two pools and a couple of Jacuzzis and rows of sun beds. I take a look but am not expecting to make much use of them as the sea has suddenly turned rough as we go through the Channel. Indeed, lying in bed later, it seems that my cabin is bearing the brunt of it, being high up and right at the front. It doesn’t disturb me too much but other passengers don’t get much sleep.

Historic town of Obidos and Lisbon

After a couple of days of rough seas, the sun begins to break through and the ship settles into a pleasant rhythm. Lisbon is sunny and warm and I explore the historic Alfama district before taking a trip to the historic town of Obidos, around an hour to the North.

In the summer, this is so packed with tourists that it’s almost impossible to walk in the main street but this time of year it’s pleasantly quiet. I do a tour of the ramparts, not for the faint-hearted as there’s no guide rail and the path is quite narrow. 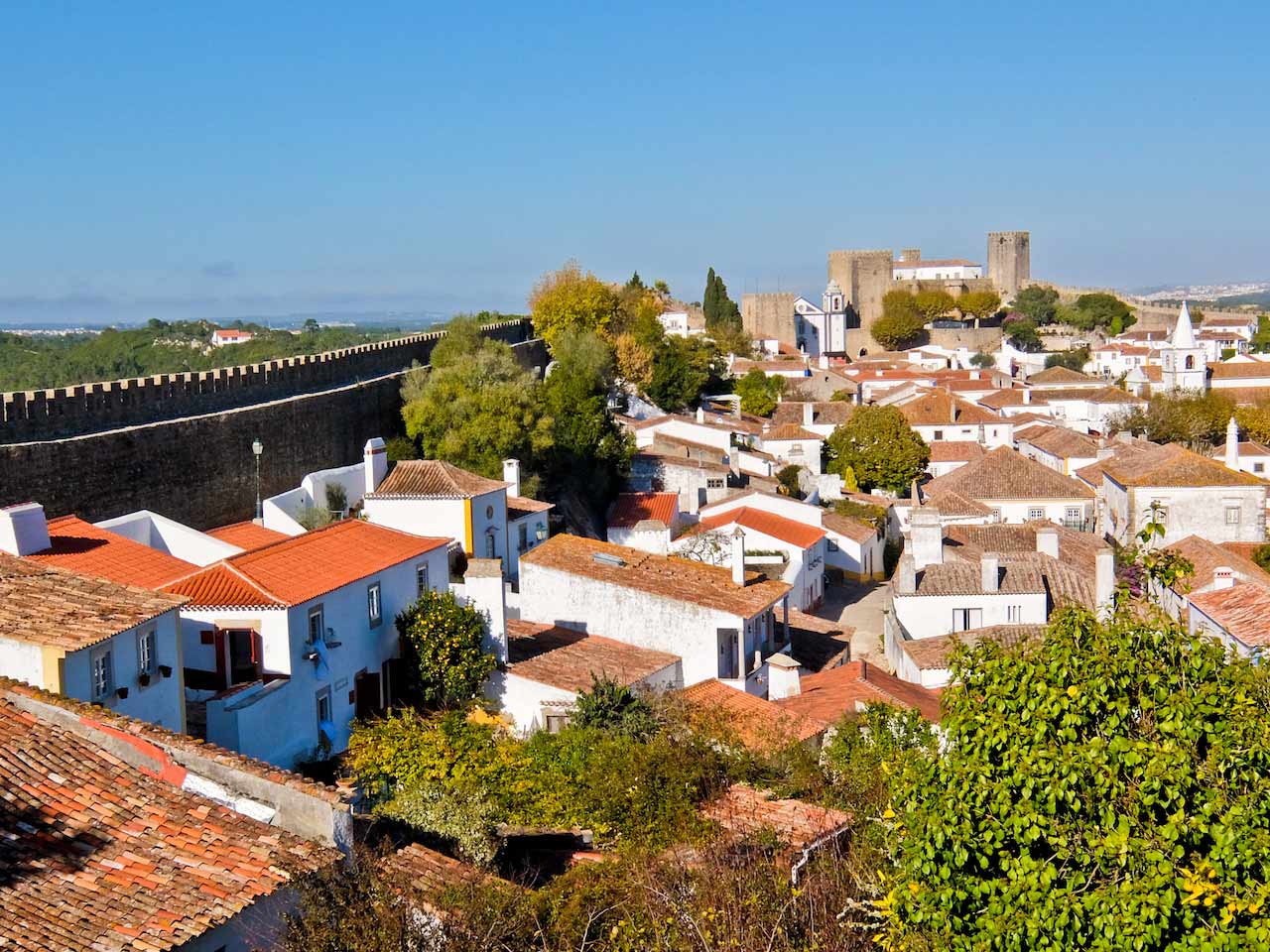 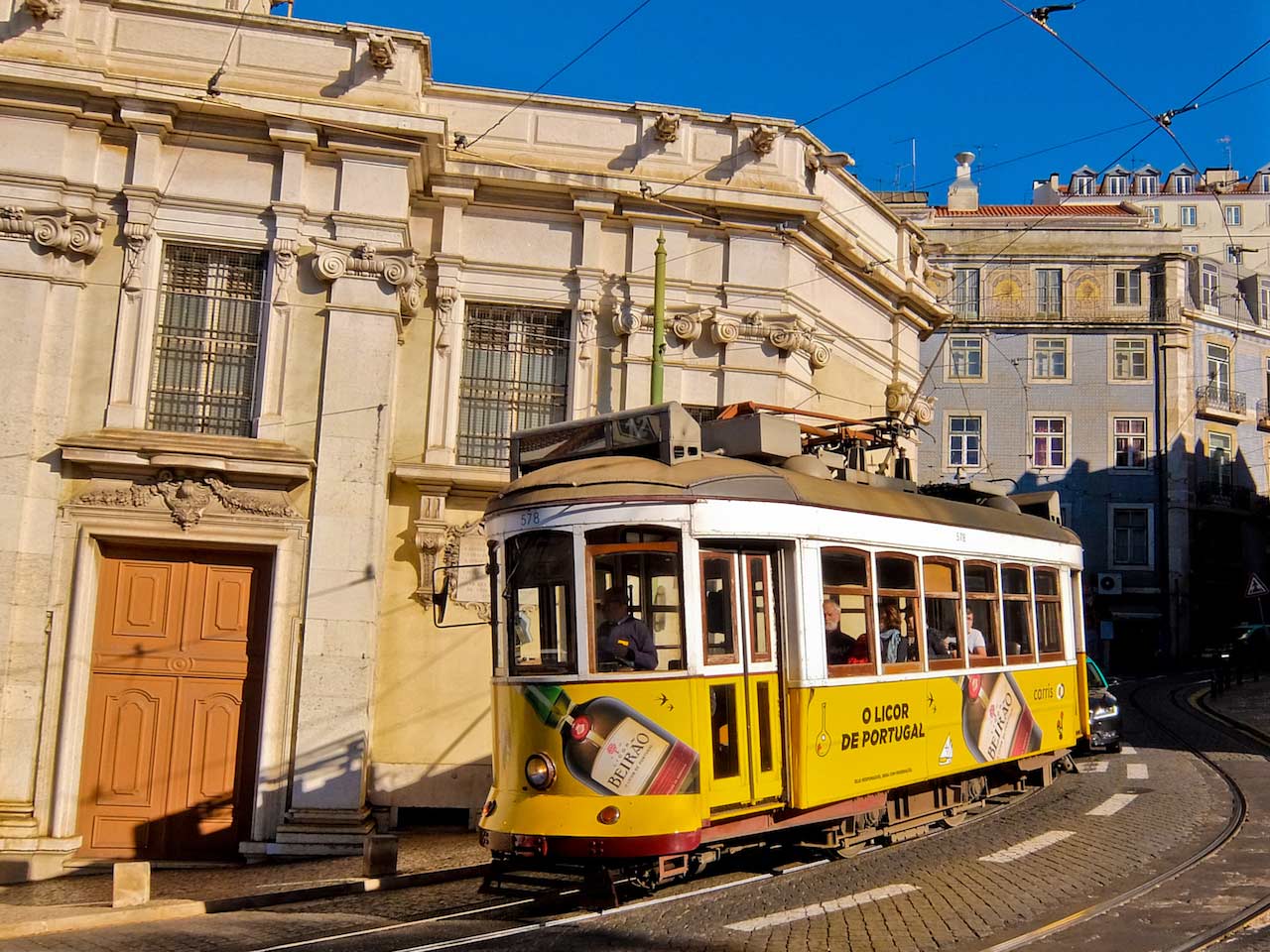 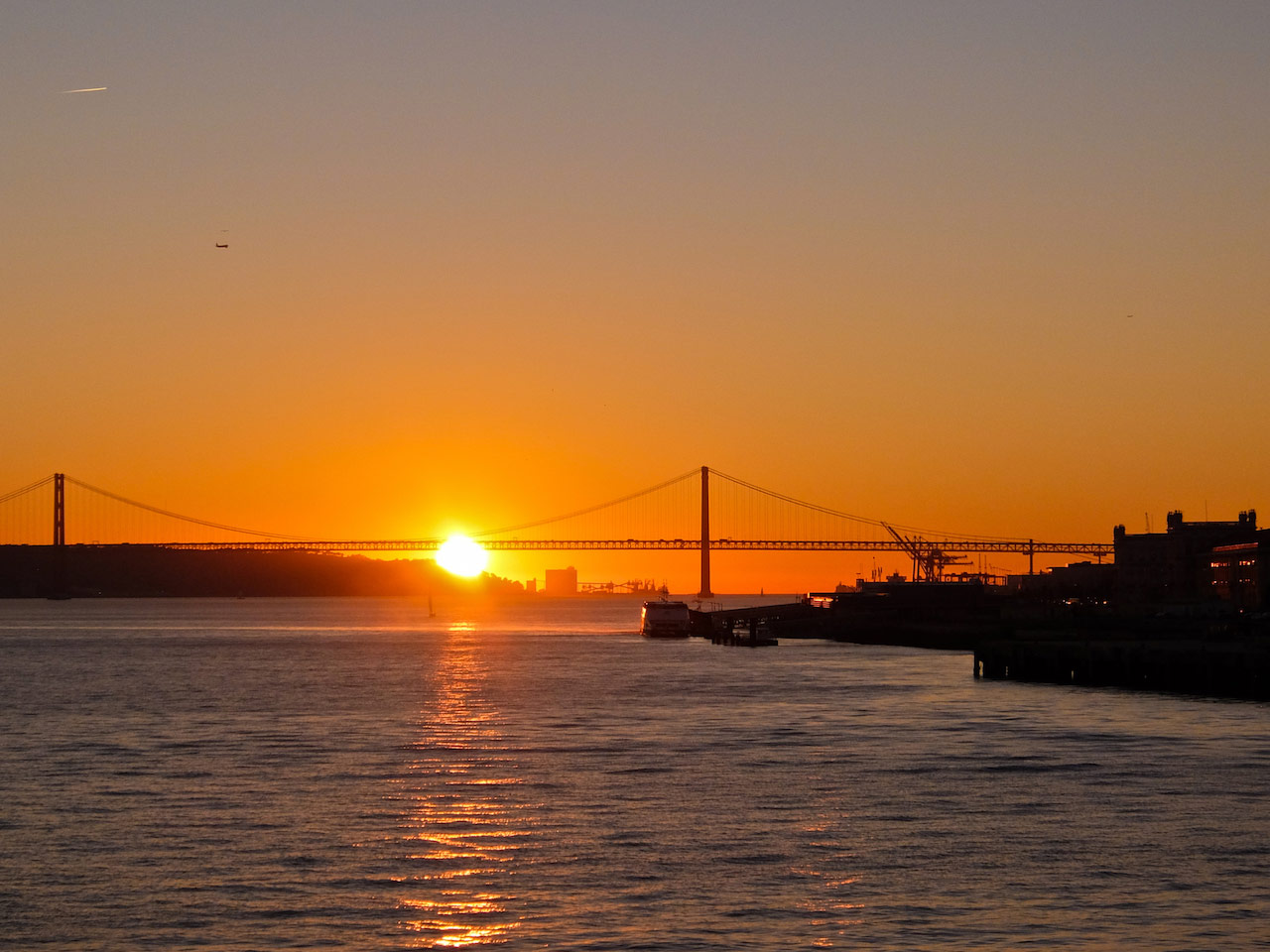 If you have limited time in Lisbon, make sure you read our Top 10 things to see and do in Lisbon or 24 Hours in Lisbon guides.

We sail in the evening and next day brings us to Portimao, on the Algarve. This is a centre for sardine fishing and small restaurants on the sea front serve them up grilled. 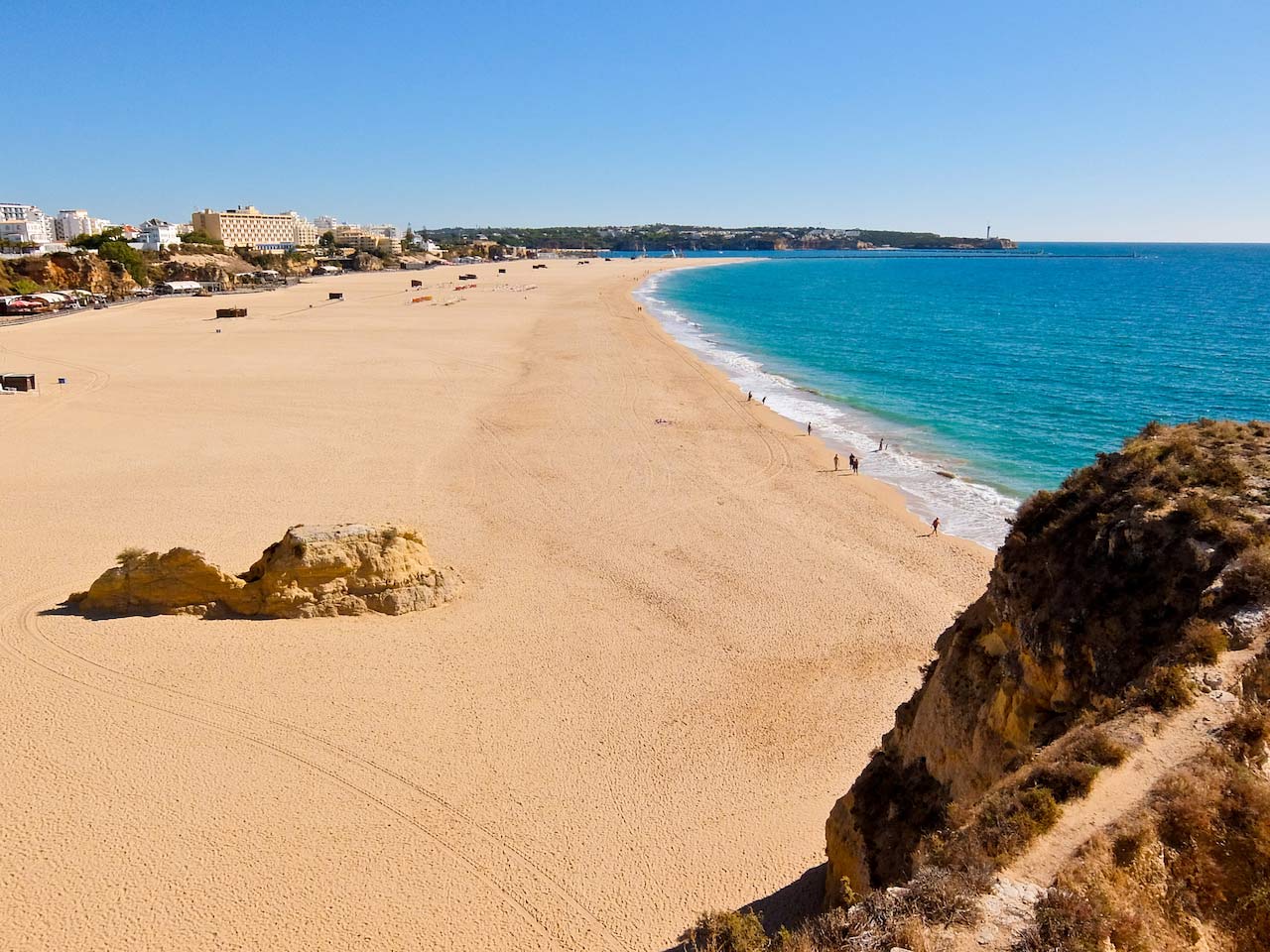 I’m fancying a swim so make my way to the beach of Praia de Rocha, a wide stretch of golden sand backed my rocky cliffs. The water is fresh, not warm enough to linger, and I’m one of the few brave souls to tackle it.

Early the next morning we enter the Guadalquivir River which leads to the city of Seville. The Braemar is one of the few ships able to navigate the narrow channel and after 49 nautical miles we moor right in the heart of the city. 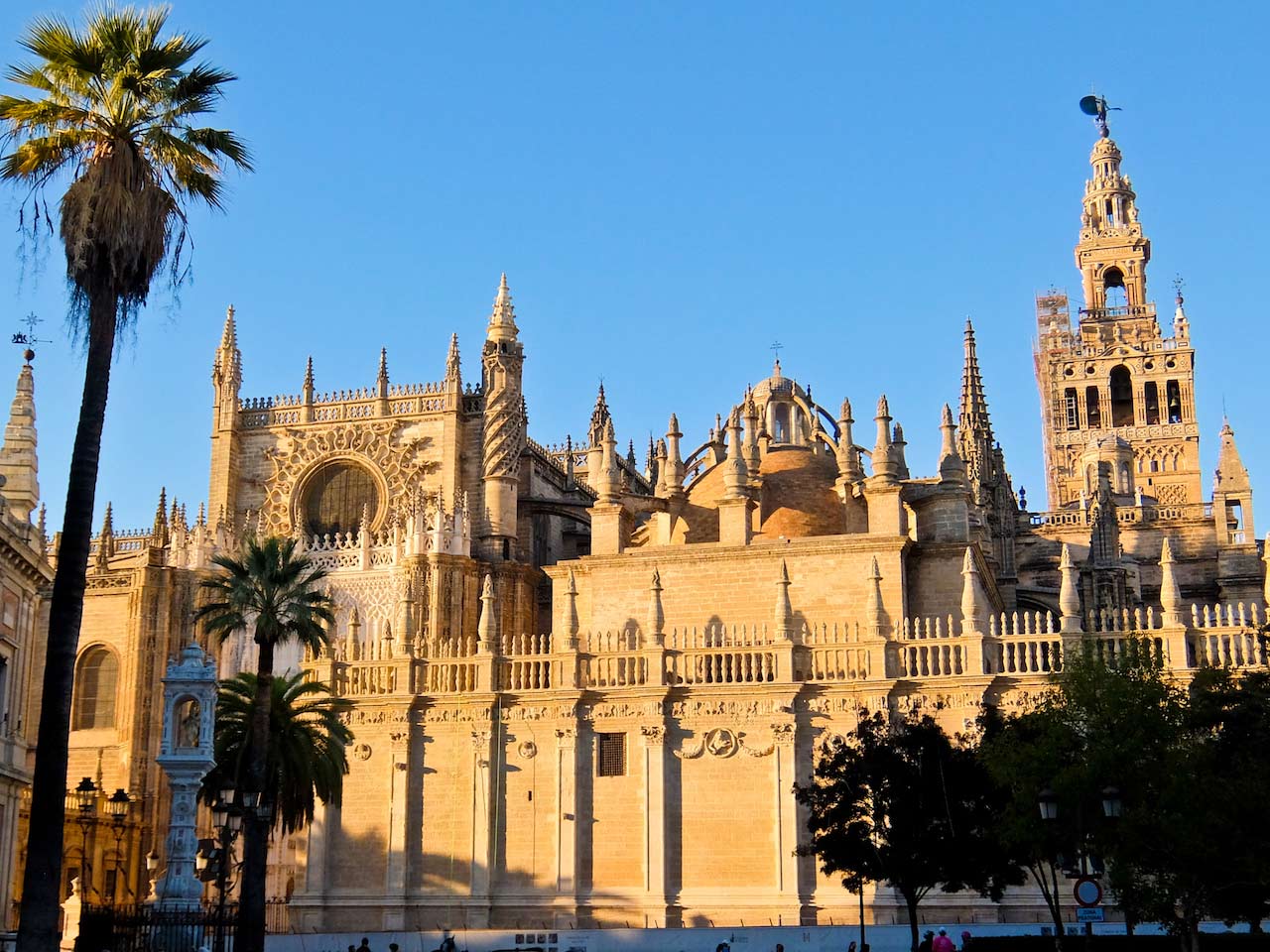 The famous Gothic cathedral is the third largest church in Europe after St Peter’s and St Paul’s, and contains the elaborate tomb of Christopher Columbus. I climb to the top of the 100m Giralda tower, formally a minaret, taking a series of ramps, rather than steps. It was designed this way so the Iman could get up for the call to prayer on a donkey. The Alcazar, just opposite, is a royal palace that also has Moorish origins and the upper parts are still used by the King of Spain when he’s in town.

In the afternoon, I cross to other side of the river and explore the Triana district, all narrow alleyways and once home to the city’s gypsies. It’s undergoing a process of gentrification but I stumble on a small bar where outside, two guitarists are accompanying a young woman singing and stamping flamenco. This is decidedly not for tourists so I linger and enjoy the music.

The next day is spent at sea and the weather is so warm that it’s pleasant to sit out on the top deck and take in the sun. For my pre-dinner aperitif, the Observatory on deck 8, with its large picture windows, becomes a regular haunt. The main evening’s entertainment happens in the Neptune Lounge where an excellent Filipino band backs various singers and one night have a show to themselves. Other nights see comedians, magicians and variety with the ship’s resident entertainers.

Although Malaga is an attractive city in its own right, I’m taking a trip to Granada and the Alhambra Palace, a couple of hours away. 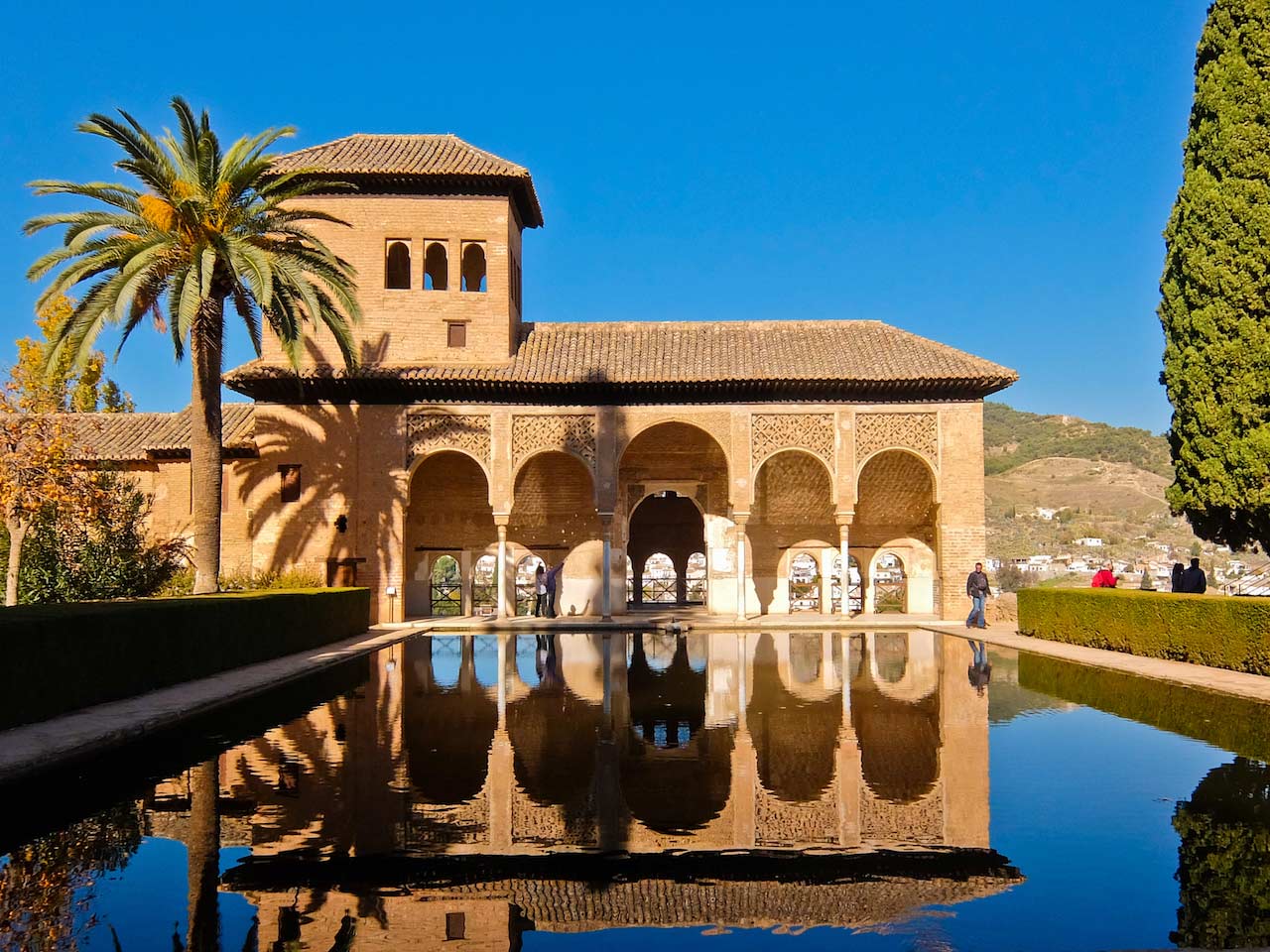 There are three main attractions here – the fortified Alcazaba citadel, all towers and ramparts, the beautiful water gardens of the Generalife, and the Nazaríes Palace. This Moorish delight is the highlight and despite all the hype doesn’t disappoint. The fountain of the lions is sublime and I’m just wishing I have more time.

Ceuta on the North African coast

Sailing down the river, then through the straits of Gibraltar, we arrive at the city of Ceuta on the North African coast. This tiny Spanish enclave, nestled in Morocco, is a hangover from the time when this whole area belonged to Spain. I’m interested in an excursion to Tetouan, in theory only an hour away, but customs and immigration make this trip to Morocco twice that. 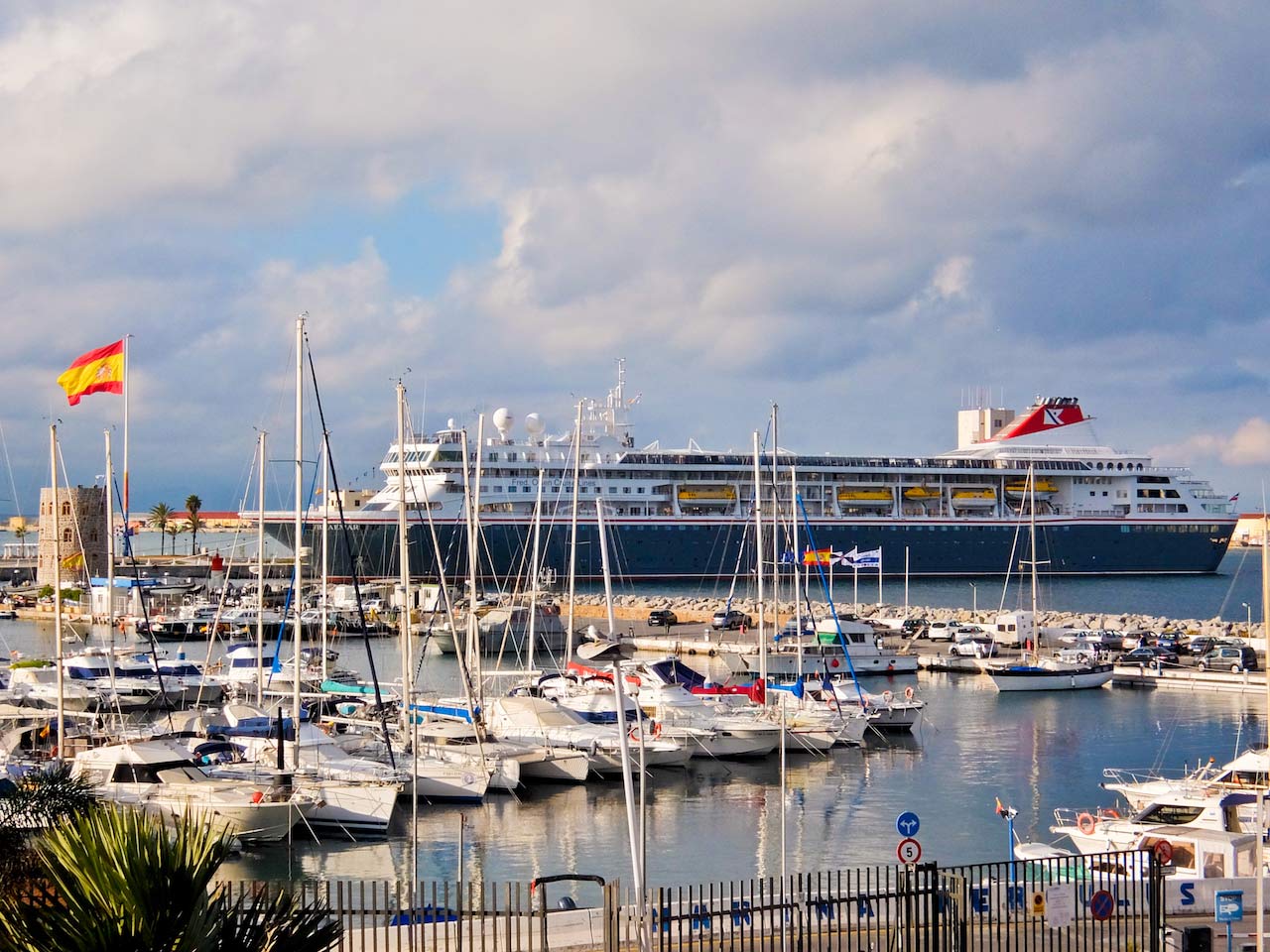 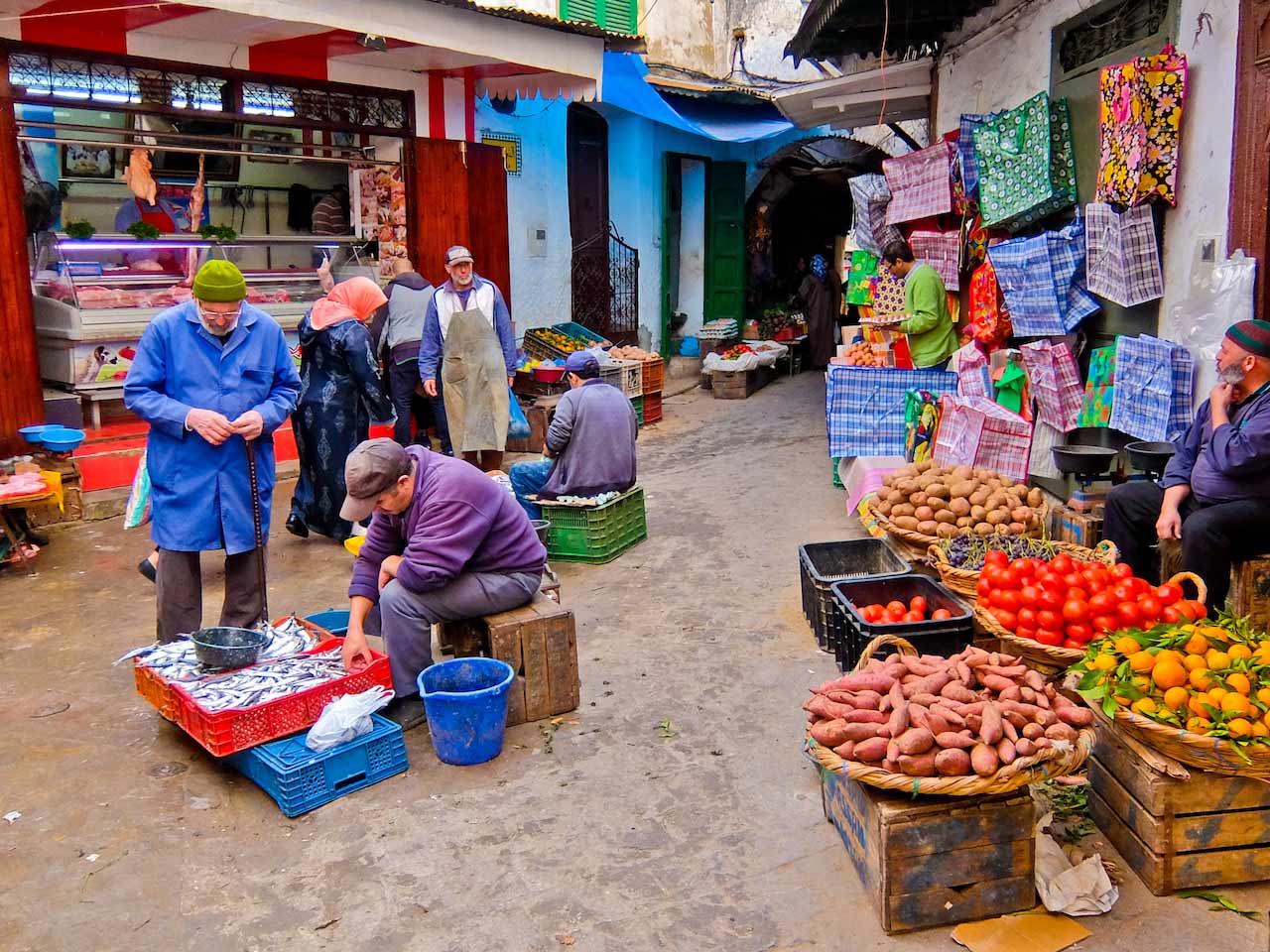 Still there’s a beautifully preserved Casbah here, a souk protected by ancient walls, and as they don’t see too many tourists there’s also very little hassle. Wandering through the narrow lanes, packed with stalls selling fresh fish, vegetables and meat, you really do feel you’re back in the middle ages. A refreshing cup of mint tea and some traditional live music in an attractive tiled courtyard complete the experience.

Sailing back to Southampton

From here it’s homeward bound, back up the Atlantic coast for a day in Vigo then through the Bay of Biscay to Southampton. Mercifully the seas have quietened and it’s a few lazy days on deck, climaxing in an invitation to a formal dinner at the captain’s table. It’s still warm enough to take breakfast and lunch al fresco on the tiered stern, and one day a school of dolphins follows our boat. 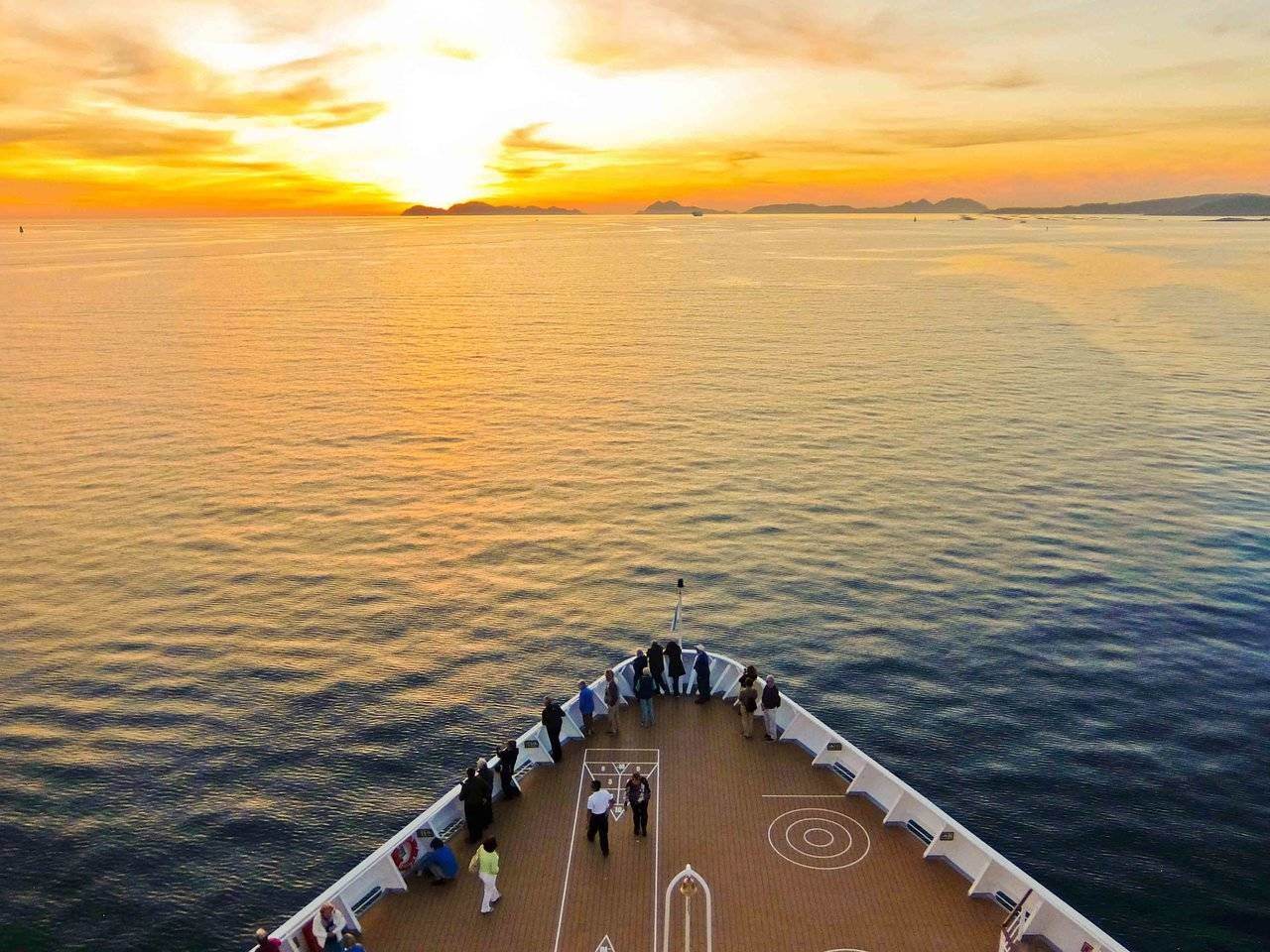 On my last day at sea I spend a delightful afternoon in the Observatory, taking tea with scones and jam, to the sound of the cocktail pianist. That’s followed by a full body massage and I’m so relaxed I’m not looking forward to getting off the boat. I toy with idea of stowing away but since the ship is off for a refit in Hamburg it’s not really such a good idea.

A similar cruise next year with Fred. Olsen Cruise Lines, will be a 14-night Authentic Andalusia & Seville Orange Blossom departure on board Braemar (M1806), sailing from Southampton on 17th March 2018. Ports of call include: La Coruña, Almeria, Malaga, Gibraltar, cruising the Guadalquivir River, an overnight stay in Seville, calling at Cádiz and Lisbon, before arriving back in Southampton on 31st March 2018. Prices for this cruise currently start from £1,499 per person, based on an interior twin-bedded room (subject to availability), and includes all food and entertainment on board, and port taxes.