This tiny landlocked country, sandwiched between France, Belgium and Germany, is surrounded by rolling countryside, a wealth of culture, history and nature all packed into a country the size of Oxfordshire.

March 2020 signalled free transport for all in Europe’s richest country – The Grand Duchy of Luxembourg. This tiny landlocked country, sandwiched between France, Belgium and Germany, is surrounded by rolling countryside, has a wealth of culture, history and nature all packed into a country the size of Oxfordshire.

And the city, just an hour’s flight away from the UK, has undergone some huge changes as it strives to hold onto its status as a major player in the European Union.

There’s never been a better time to enjoy a short break in the city. So grab your free pass and check out the highlights.

Currently, 170,000 commuters come into Luxembourg each morning from nearby Belgium, France and Germany and predictions are that this will increase threefold in the next 40 years.

To combat the effect of climate change, a sleek new tram system from Spain, with trendy light-up seats has been introduced to transport you neatly and quickly around the city. Joined by a funicular and giant panoramic lift, cars may well be a thing of the past.

Tip: Central station is a hive of activity for the thousands of commuters and is also home to a huge mosaic window depicting the outline of the city and an artistic ceiling that welcomes the workers who are vital to Luxembourg’s economy.

One thing the Luxembourgers are keen to keep is their historic old town and its fabulous architecture. You can spend hours strolling around the beautifully kept buildings, peaceful squares and ancient bridges.

One of the most impressive bridges is the 16th century Grand Ducal Palace – the former home to the Grand Duke of Luxembourg. It is now used for state occasions and weddings and has its own guards. Watching over it are three lampposts with gold faces curved inside, best seen at night, the middle one even gives you a sly wink. 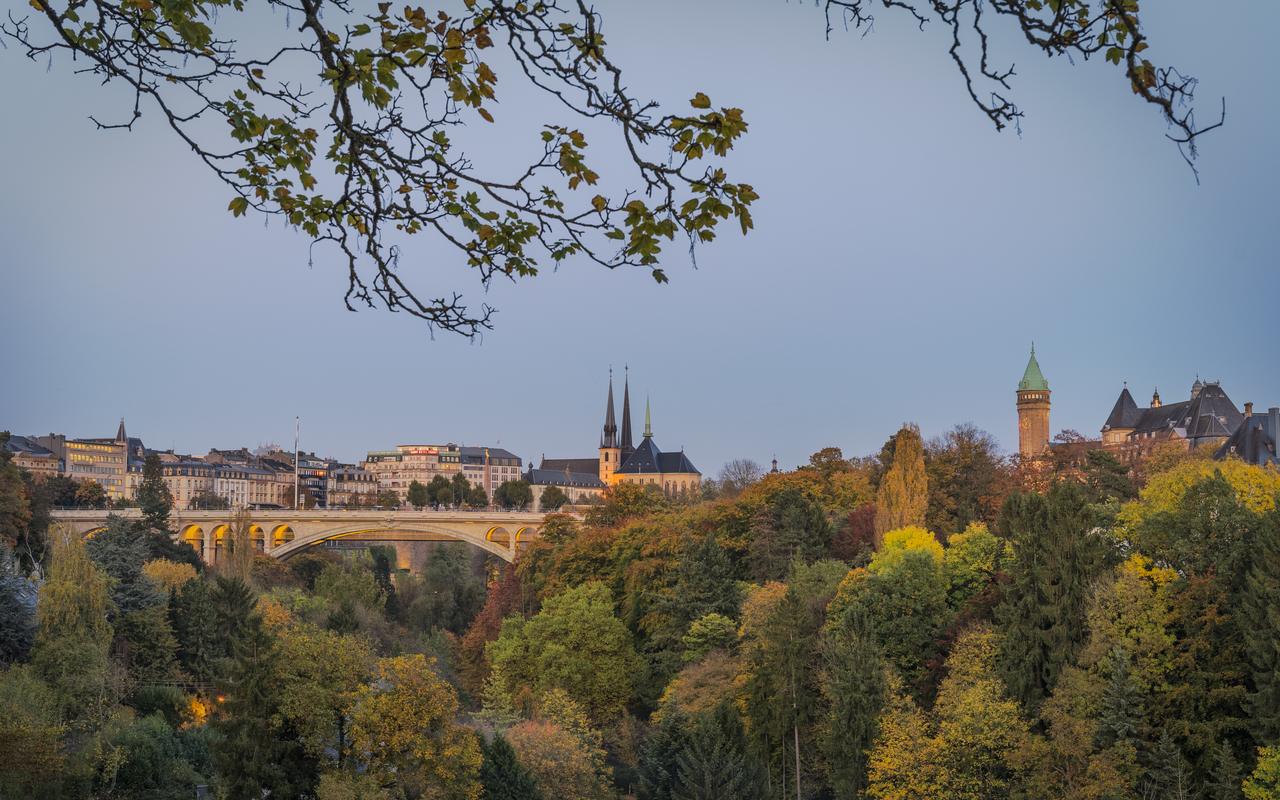 The Adolphe Bridge is a double-decked arch bridge and a great landmark if you lose your bearings. Cross it and you will see what looks like a mighty castle, but is in fact home to a savings bank.

Luxembourg has seen its fair share of battles over the centuries and is famed for its medieval fortress which protected it from enemies. 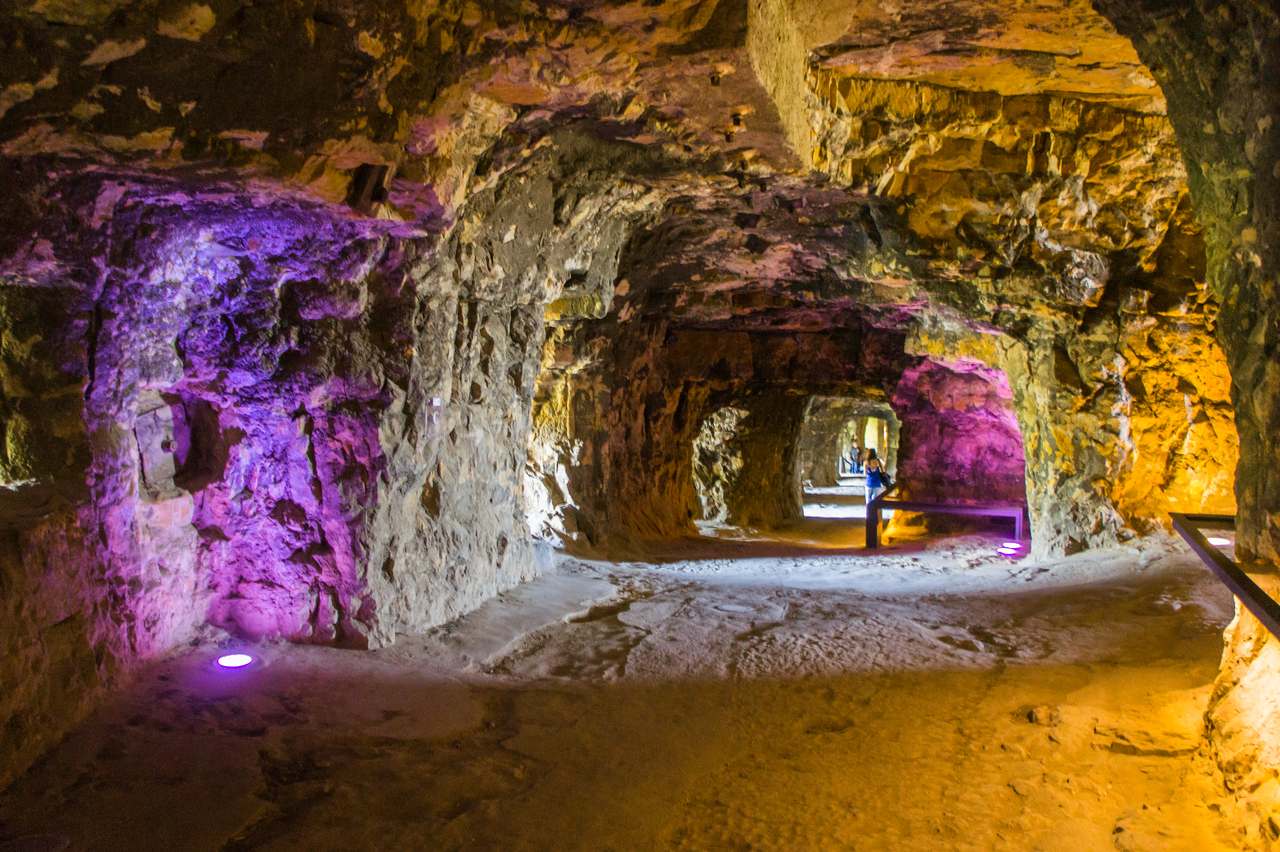 You can head underground and explore the 17km maze of stone tunnels which make up the Casemates du Bock. It was an important shelter for locals and soldiers during World War I and II.

The Kirchberg area is Connected to the old part by the Grand Duchess Charlotte bridge. It is home to the EU Court of Justice housed in two James Bond-style gold skyscrapers and it is also where the new money is thanks to its vast collection of global banks. 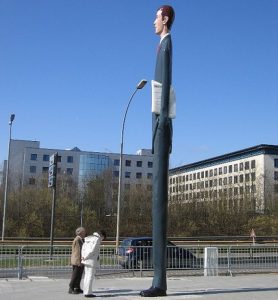 The city’s wealth is no better signified than by the impressive Tall Banker statue standing tall at the entrance to the banking district. It was created in 2002 by a group of German artists named “Inges Idee”.

Standing eight metres high in front of the Deka Bank, it is a symbol of progress, profit and an optimistic future.

It has a human-size waist yet has size 96 shoes and is impeccably dressed.

EU money has allowed the traditional housed Pfaffenthal area at the bottom of the Alzette Valley to connect with the main city via a huge glass elevator which zips you up 71 m high in the air in seconds and allows magnificent views of the green valley.

Down in the Pfaffenthal area are old-style homes, restaurants and homes for the elderly which look like castles, so fancy they are! Rent is high in this area with a small flat costing more than 1,500 Euros a month.

Every August to September the locals join in the Schueberfouer funfair, a traditional affair which began in 1340 after John the Blind, Count of Luxembourg founded it. He is buried in the crypt of the nearby Notre Dame Cathedral and the exhibition shows how the fair has changed from its wooden roller coasters and strongmen competitions to today’s modern attractions.

In 1923, the Gëlle Fra monument was built to commemorate the Luxembourgers who lost their lives in World War I. High in the sky, the lady originally stared across the city. In 1940, the statue was pulled down by the Germans, but in 1984, it returned. A few years ago it was sent to China for an exhibition and these days it appears to look down as if protecting those below.

Luxembourgers use their influence from France and Germany for their love of food and the traditional part of the city is awash with lovely old-fashioned butchers, patisseries and chocolate shops and a myriad of restaurants.

The Place d’ Armes is a great example with a fast food takeaway at one end and a Michelin starred restaurant at the other – in fact, 8 restaurants have 12 Michelin stars between them. Traditional foods include lovely hams, potato cakes, sausages and highly sugared cakes.

A newly launched Hop-on Hop-Off bus allows you to escape the city relatively easily and travel a few miles to some of the finest views in Luxembourg .to the green Ardennes.

Here perched high in the cliffs, is one of the country’s finest castles Vianden, dating from the 10th century and one of the largest fortresses west of the Rhine. Until the beginning of the 15th century, it was the seat of the influential counts of Vianden, who had close connections with the royal family of France and the German imperial court. From then it was passed by inheritance to the House of Nassau. 1820, under the reign of King William I of Holland, the castle was sold piece by piece and fell into disrepair.

It was saved by the state in 1977 and restored to its former glory. Reaching it from the cable car station takes you on a lovely walk through its woods.

You may also like to read: A walk across Luxembourg

FLY: Several airlines such as easyjet.com, ba.com and the national airline luxair.lu fly into Luxembourg airport.

TRAIN: Interrail
You can purchase a global pass which allows unlimited train journies through 31 countries. Costs start from £146.00 for 3 days within 1 month

STAY: Hotel Vauban is a traditional family-run hotel in the old town in the lovely Place Guillaume and is handy for all the sights. There are rooms and apartments which have a great view of the Notre Dame cathedral and you are awoken by the lovely peal of the church bells. Old style waiter service is on hand to ensure the delicious continental breakfast of specialised meats and pastries are washed down with freshly squeezed orange and good coffee.

Alternatively, try the stylish Le Royal located within walking distance to all the attractions of the city and offers a fine dining restaurant.

EXPLORE: The Luxembourg card is a great way to see everything on offer and until the new free transport system comes into operation next March, it means you can travel for free. All the options are available via www.luxembourgcard.lu  and  www.seightseeing.lu

TOURS: There are several tours you can join. Check them out here.