Behind the unremarkable façade of an office block of a building lies The Bedruthan, a swish and stylish hotel with some of the best views of the North Cornish coast. Set high above the cliffs at Mawgan Porth overlooking a golden beach, five miles from Newquay and a twisty 20-minute coastal drive from Padstow, two generations of one family have created something of a holiday haven for families.

Overall, the hotel is perky and practical with loads of colour, room to breathe and bags to keep the kids happy.  And it’s highly informal; the fact that the reception is nestled in the heart of the building, rather than awaiting you as you arrive, is testament to that. Long corridors hide playrooms, a gym and some quirky shopping areas. Apart from the Tranquility Lounge, which is adults-only and manages to live up to its name, children are free to roam at will.

And there’s masses of car parking.

Families mainly, especially those looking for a base to discover North Cornwall’s coastal gems but knowing they can kick back and relax if the long drive has taken its toll.  The hotel was an early adopter of the family experience and works hard at staying ahead of the game here. 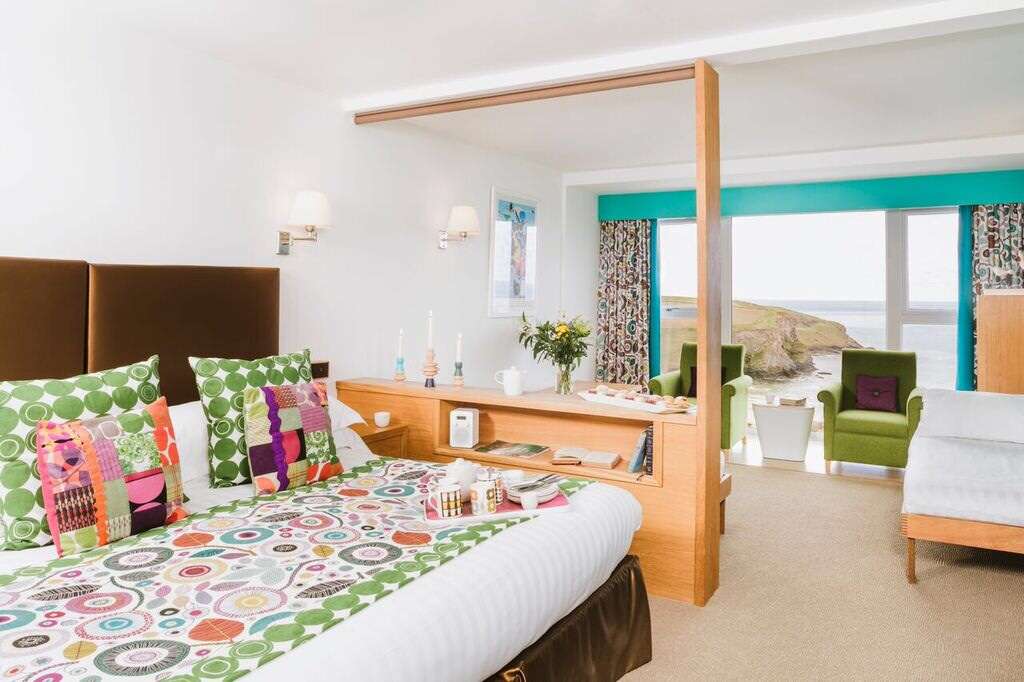 Rooms are bright, colourful and spacious. Many rooms are sea-facing, which means watching the tide go out to reveal a fabulous expanse of sand or watching it come back bringing some seriously surfer-friendly waves. Either way, its highly conducive to room service.

A row of family suites complete with bunk beds and sunbed terraces sit along the back and are worth the extra investment if only for the pleasure of sliding back the doors and watching the kids spill out on to lawns littered with play equipment, a trampoline and five-a-side grass football pitch.

When the sun’s out you’ll find parents on loungers watching them play on the grass in front of them. One tip: if you do take one of these, use the netball court down the side to unload the luggage as it’s a trek via corridors with stairways from the main entrance.

The chef is big on home-grown and “foraged” produce and firm in the belief that fresher tastes better, so takes advantage of the wealth of quality producers you’d expect from such a postcode and does well to compete with the celebrity alternatives on the doorstep.

The Wild Cafe, the more informal restaurant where children are welcome

There are two restaurants, one casual – The Wild Cafe, one smarter – The Herring Restaurant, although neither are particularly fussy. That said, there is a certain flamboyance to the menu with dishes such as guinea fowl ballantine and pine nut milanese with fennel and parsley sauce offered as a prelude to the likes of duck breast with rhubarb, kale and sweet potato fondant with a soy and ginger jus.

They’re big on home-made cakes too and offer picnics, particularly in high season when guests are out and about. 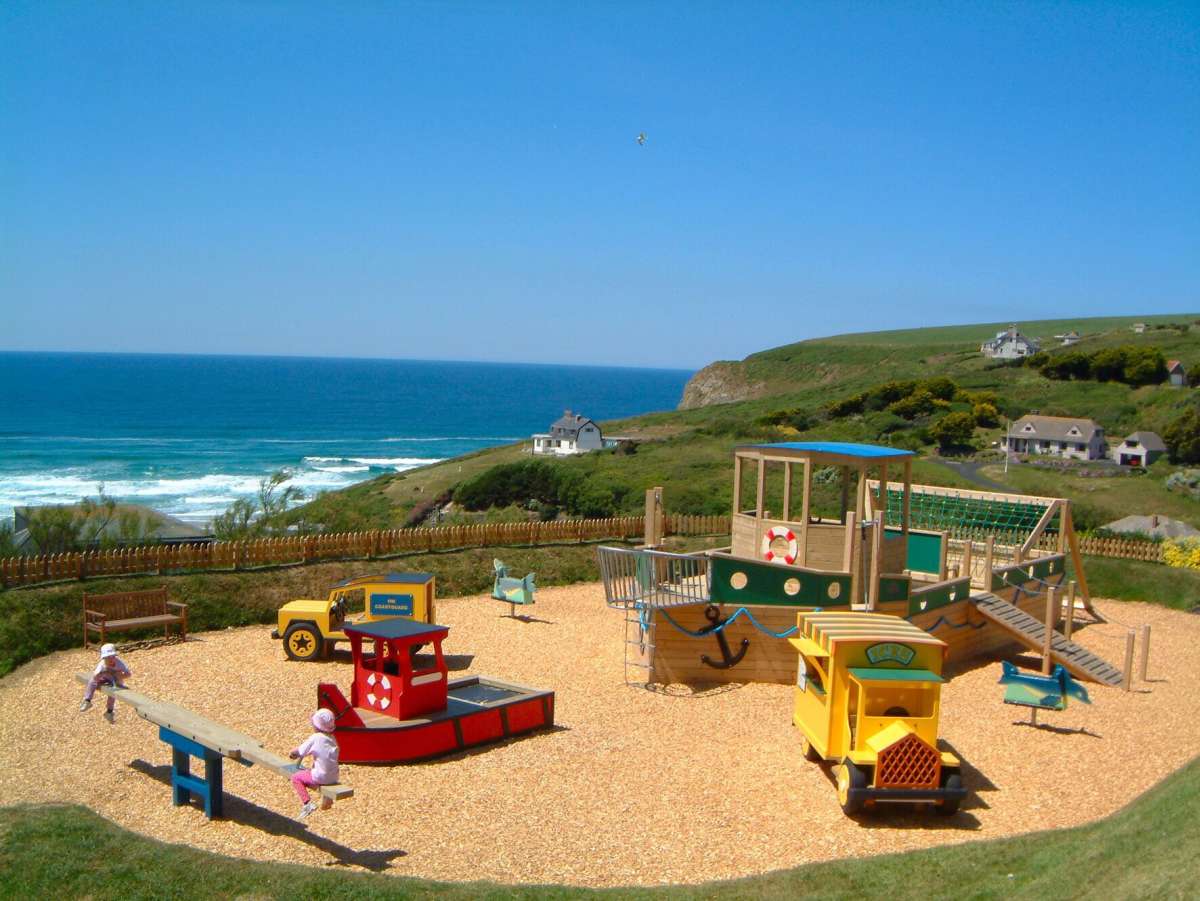 A corner of the play area for younger children. Alongside it is a wide expanse which includes trampoline, zipwire and a five-a-side football pitch.

The hotel offers everything a child could want. A playroom with ball pits, slides and all the soft play they are used to in those half-term outings. A waiter even serves parents lounging on the sofas and the older ones can amuse themselves on the sort of £1-a-time mini-rides that line shopping centre malls.

There’s a spa stuck out on a wing with a sauna, hydro pool and a eucalyptus steam room. The indoor pool enjoys quite escapist sea views, and if want to see them close-up, there’s a cliff path that takes you all the way down to the beach at Mawgan Porth. The very young are best kept on harnesses for that though.

There’s also a large round outdoor pool complete with poolside bar surrounded with plenty of pink and orange loungers.

Interestingly, the reception desk has just about everything on hand, from Bonjela to swim nappies, which is reassuring, given it’s distance from the nearest chemist.

Loads of notable beaches, such as Watergate Bay, famous for its annual surf championships and the spectacular Bedruthan Steps with its precariously steep single-file pathway down, both equidistant, a few miles north and south.

A few miles further in either direction are Padstow and Newquay. Foodies may want to book Jamie Oliver’s Fifteen at Watergate for lunch and Rick Stein’s Padstow Seafood Restaurant for dinner.

Apart from Watergate, the best beaches are along the winding lanes north: Porthcothan, Tryarnon, Constantine and Harlyn bays being most notable. Expect to share many of the car parks with camper-van loads of surfers who spill out on to the grass and squeeze enthusiastically into wet-suits.

And if you don’t fancy driving anywhere, Newquay airport is ten minutes away.

Yes, although be warned: phone signals can be a bit pot-luck.  Staff will recommend anything from the top of a row of steps out front to a stroll along a nearby lane to ensure every network is accommodated.