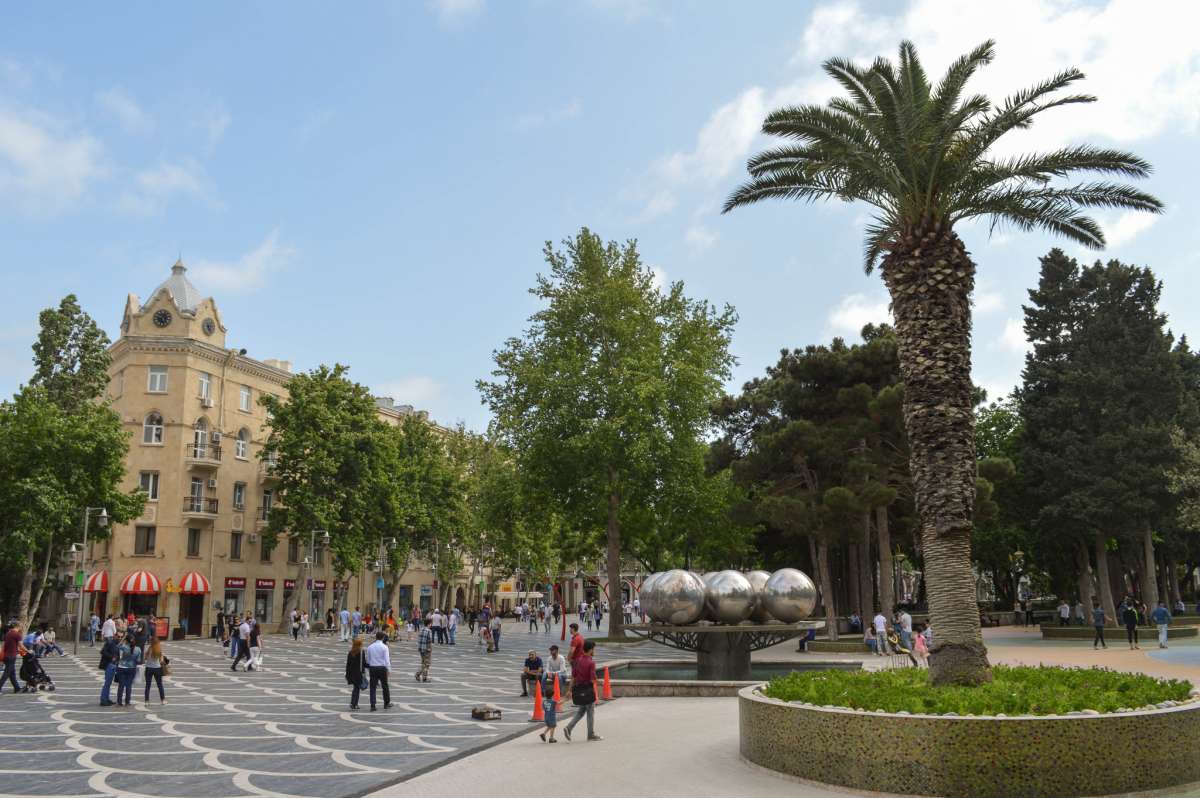 Azerbaijan’s capital Baku in 2012 had the world’s attention when the Eurovision song contest came to town and the millions invested in prettifying Baku has given the Azerbaijanis something to sing about.

The Eurovision spotlight has since left Baku but this spectacular capital has been left with a more than just a bright sparkle. So what can the avid traveller cram into 48 hours in this relatively undiscovered Caucasus gem?

The Boyuk Gala Hotel is ideally situated in the side streets of the Baku old city which is hemmed in by a sand coloured ancient wall. For business trips or a couples retreat the Boyak Gala is ideal. The rooms are decorated in typical Caucasus style, deep colours adorning the walls with delicate pastel colours all blending together to give a feel of warmth and comfort. The antique furniture, buffed to perfection, helps add to the comfortable feel of the room and support the necessary mod-cons. Free Wi-Fi, plasma television and a marble balcony are all extra luxuries that come as standard in this well priced abode.

On a sunny morning it is a pleasure to walk along the restored cobbled roads and side streets of the Baku old city. Baku means the ‘city of wind’. The brisk winds blowing in from the Caspian Sea barely effect the old city. The ancient city walls offer a wind break as well as a glorious spectacle to glaze at from the comfort of an Azeri restaurant.

Stalls and local shops are well placed in the old city. Tucked into old buildings and around the various historical monuments they offer everything from tourist trinkets to the national speciality – carpets. 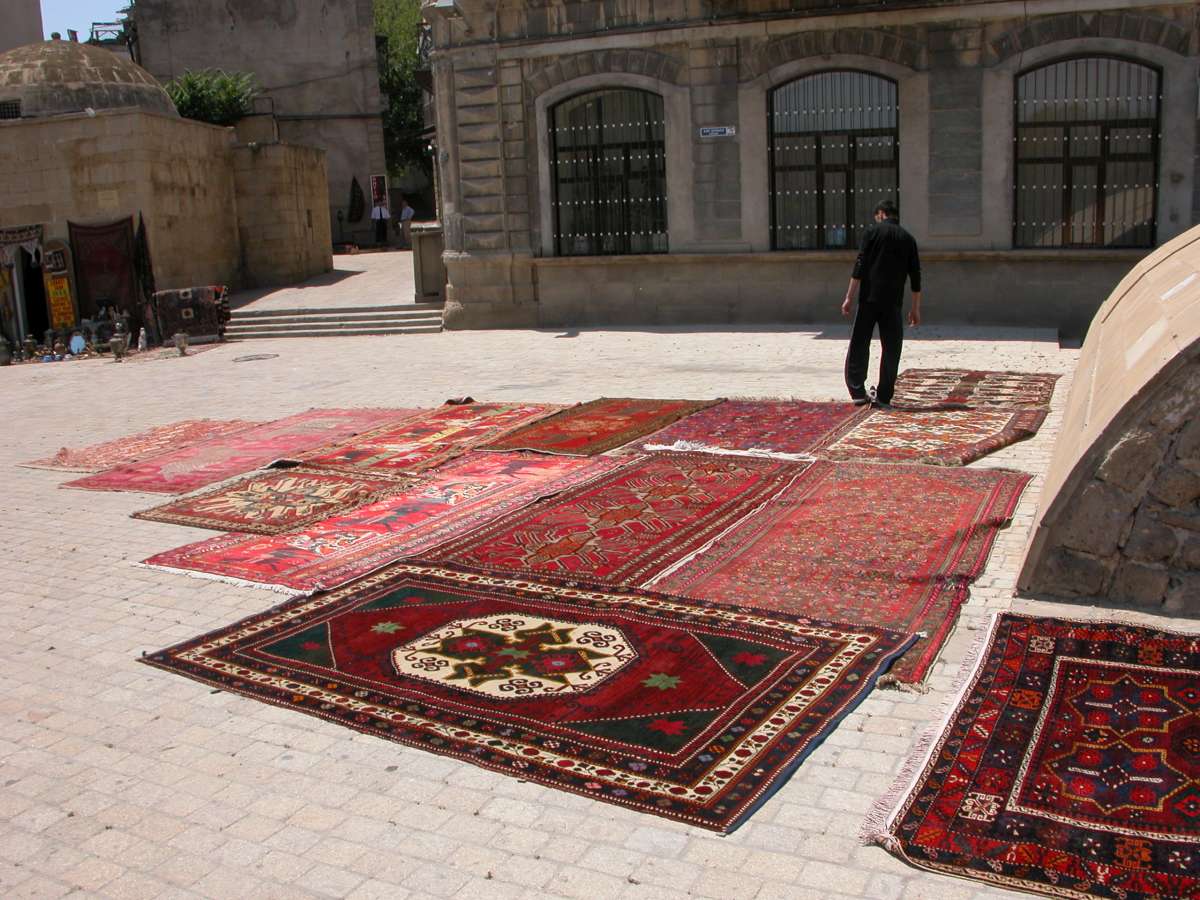 The high streets with impressive modern Azeri buildings have fantastic shopping opportunities with everything from H&M to Prada available. Baku has a mix of old and modern, east and west and somehow they all blend into, something ‘Azeri’.

Fountain Square in down town Baku was first constructed in Soviet times and has since been developed and remodeled by the Azerbaijanis. To get there it is easiest to walk up Nizami Street past several 19th century buildings that inspire the imagination. The fountains at night are lit up and during the day it is a popular destination. 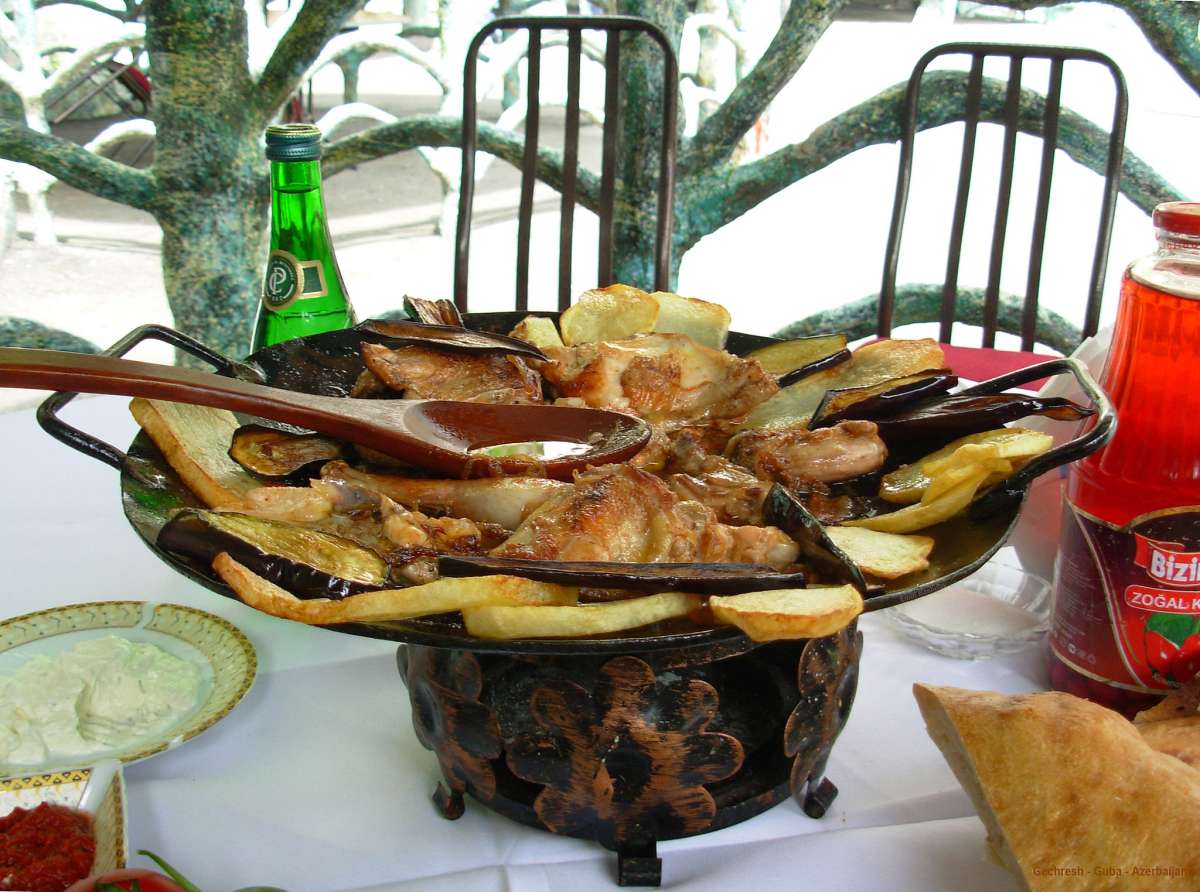 If you are on a budget, there are huge varieties of street food available from stalls and open air markets throughout the city. Going in December the choice of having roasted chestnuts and an Azeri coffee for under €3 is a perfect nibble for the peckish explorer. As you walk along the Neftciler Prospekti promenade by the sea you come to the Sahil restaurant. The Sahil restaurant serves Azerbaijani and western food with fluent English speaking staff who are warm and welcoming. It is not cheap by Azeri standards but with such a favourable conversion rate it is a shame not to indulge. The Caspian Sea fish arrives fresh off the boat every morning, making the taste as authentic of true Azeri Caspian cuisine as possible.

Wine lovers take note: if you’re a fan of new world wine you will love the local grape. The whites are crisp, flavourful and retain an aroma individual to the locally grown grape. 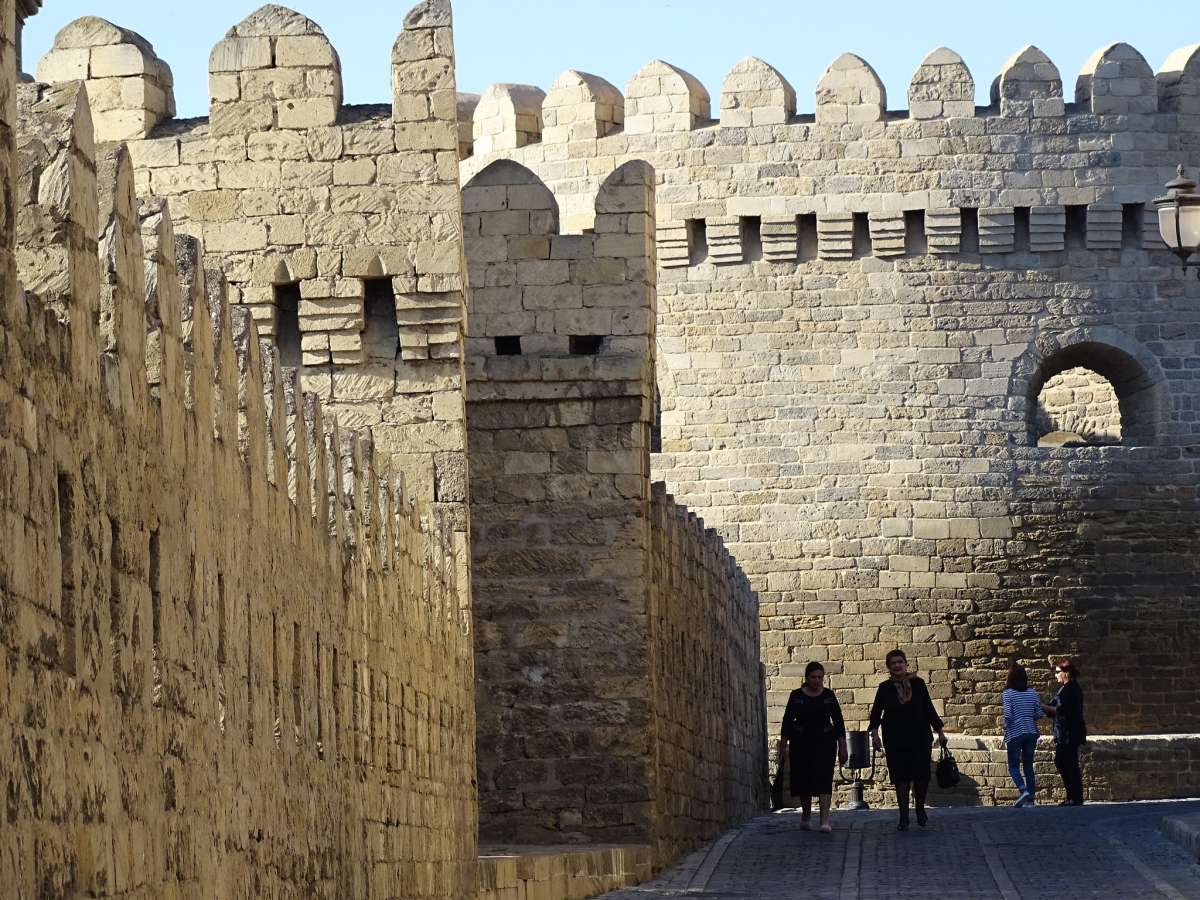 The Maiden Tower is a UNESCO World Heritage historical monument in the old city of Baku. Take a tour and see the view from the top looking across the Baku seafront for a small fee. The tower dates back to the 15th century and is one Azerbaijan’s most distinctive national emblems. The curved, sand coloured structure looks magnificent in the Caucasus sun which adds to its splendor. The Palace of the Shirvanshahs, on the opposite side of the old city, dating from the same period espouses traces of the Azeri Muslim identity.

The fruit markets are a spectacle in themselves. The locals are warm and friendly they make it more of a delight while sampling the local produce. The open air market Baki Takhil Bazar on Aliyar Aliyev Street in Narimanov district is my choice especially for fresh pomegranates and feijoa fruit.

The Haydar Aliyev Center is a modernist styled architectural delight opened in 2012 which has been hailed as a spectacle of enlightened engineering. It is something you do not see everyday, a building shaped like a signature with so many beautiful curves and sections veering off in a myriad of directions, an architectural enthusiasts dream and well worth a visit. 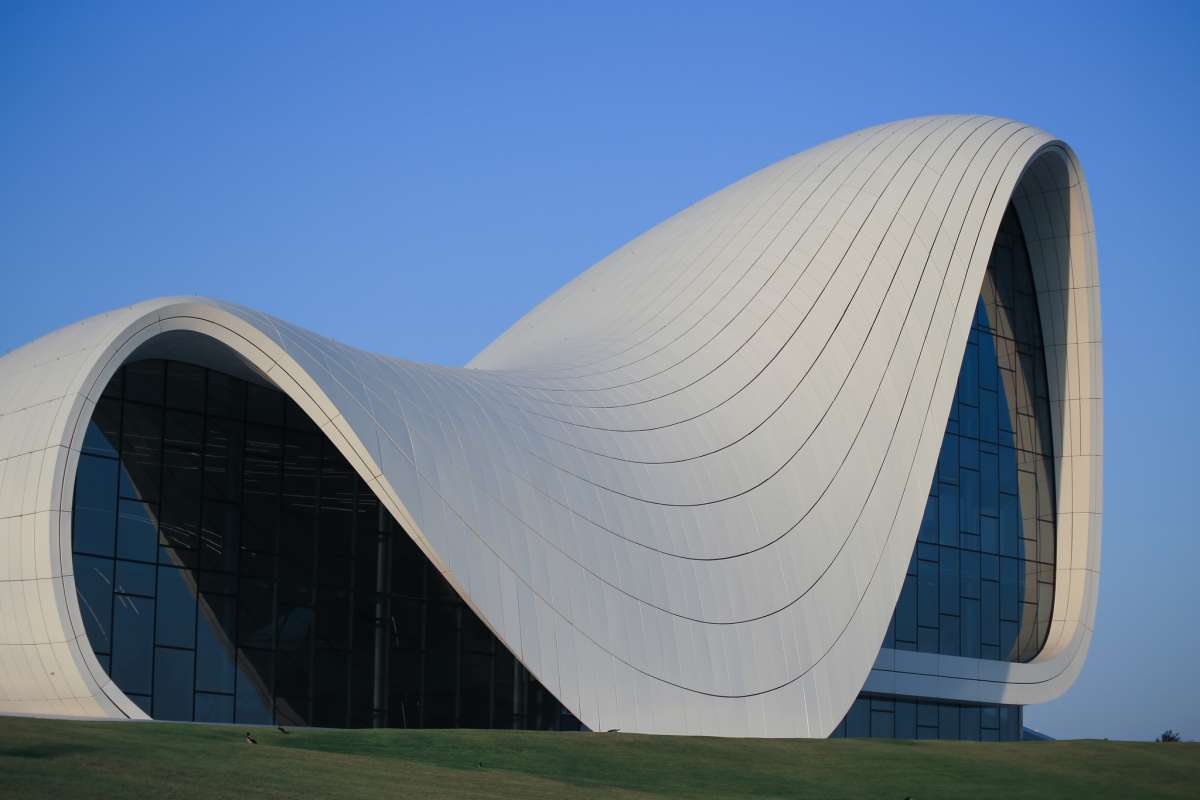 Martyrs’ Lane is a memorial for the fallen Azeris from Black January and the Nagorno-Karabakh war. To the south of the city, perched on top of a steep hill this emotion evoking memorial offers the best panoramic view of the city available with the Flame Towers up close.

In the old city, the restaurants have kept their traditional feel and design, still serving the same delicious local delicacies as generations before. The Terrace Garden & Q-bar, is my favourite restaurant in Baku. Difficult to find but worth the search. Just behind the important Azeri historical monument – the Maiden Tower over the bridge, past the carpets and up the stairs you can find this delight. The postcard view of Baku on offer as you dine is irresistible. Opting for an Azeri ‘winter warmer’ of stew with a tender lamb shank within, is magic when coupled with a glass of dark coloured, flavourful Azeri red wine. The terrace where you dine is encased by glass, so on all sides you can see the stars, the Caspian Sea and the famous Flame Towers illuminating the surroundings.

Must Visit a Museum

On Yusuph Safarov street just at the end of the seaside promenade to the east side of Baku you can find the the Baku Museum of Modern Art. If you are an art lover the Museum, which opened in 2009, has exhibitions from world renowned Azerbaijani artists such as Altay Sadikh-Zadeh. The building itself could be an art piece with beautiful metallic structures and a minimalist layout. The well organized layout showcasing both paintings and sculptures will keep you entertained for hours. The Avant-guard of the Azerbaijani art world are here to see with sculptural masterpieces from the 1950s onwards on display. 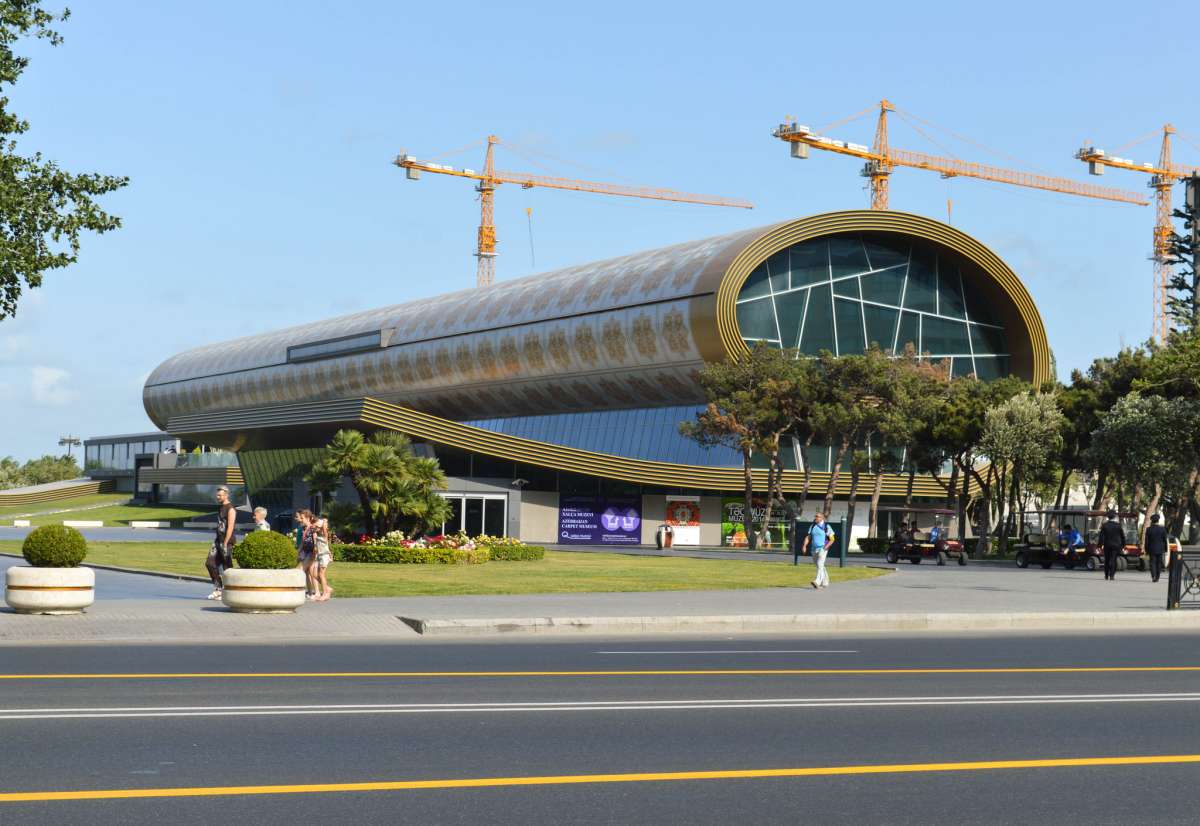 The Carpet Museum, close to the old city, to the west of the seaside boulevard is a must. The building is even shaped like an ornate carpet being unrolled. Even if carpets are not your thing, you cannot help but be spellbound by the intricate details and craftsmanship that goes into one of these Caucasus weaving feats. Inside you will find the history of Azerbaijan displayed and explained with signs in English beside carpets representing times, places, people and events. The designs are so detailed that it is almost like having an illustrated history lesson about Azerbaijan.

Must Catch a Show

While the Azerbaijanis have shown their singing talents, one of their lesser known attributes is their skill in ballet. On Nizami Küçəsi Street in possibly the most stunning buildings in Baku you can find Azerbaijan State Opera and Ballet Theatre. The building has Eastern Orthodox styled features like rustic domes, stained glass windows and engravings of royal insignia. The building looks like something you might find in the Winter Palace, Moscow or any fairytale book, so impressive that it forces your imagination to run wild. The acoustics are fabulous inside and the classical instruments are mellifluous when their notes reverberate around the room. Either for a ballet or opera performance I would stick my neck out and say this theatre can rival any other theatre in the world – this I do not claim lightly.

Being British and passionate about tea I was pleased to discover that its not just a British obsession. A shared enthusiasm for tea is something the Azerbaijanis and British have in common although in Azerbaijan they do it in style. 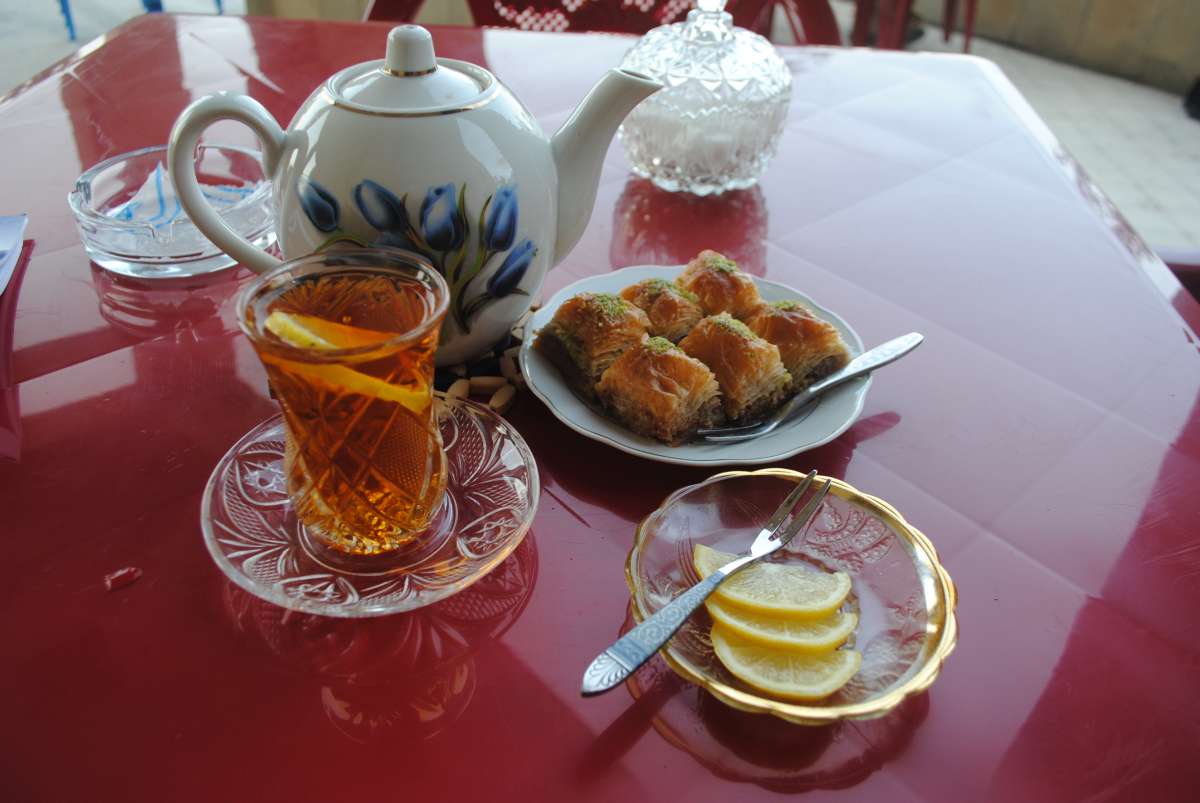 Tea is available everywhere throughout Azerbaijan and often is served with a side of sweetened apricots or feijoa fruit. Try Çay Evi tea house on Suleyman Rustam Street near the central bus station. Don’t let the exterior décor fool you, outside it’s plain and simple looking but inside its resembles an Azerbaijani sultans lounge. Snug in the velvet bright coloured cushions for a reasonable price you can choose from a mind boggling array of tea. The staff can explain why different teas are for different occasions and some are better suited for morning, afternoon or evening. When the tea arrives in a small, bolt-black, hard iron kettle with its own heater beneath and the delicate glasses with saucers are displayed it is wonderful. Sipping on steaming hot Azeri tea and watching the world go by was a great way to relax after a busy day of sight seeing and exploration in this remarkable city.

READ NEXT: Azerbaijan – Land of Fire

Why we shouldn’t ban the swastika