Home WorldMiddle EastIsrael Israel: What to see and do in the Red Sea seaside resort of Eilat
IsraelTravel Articles 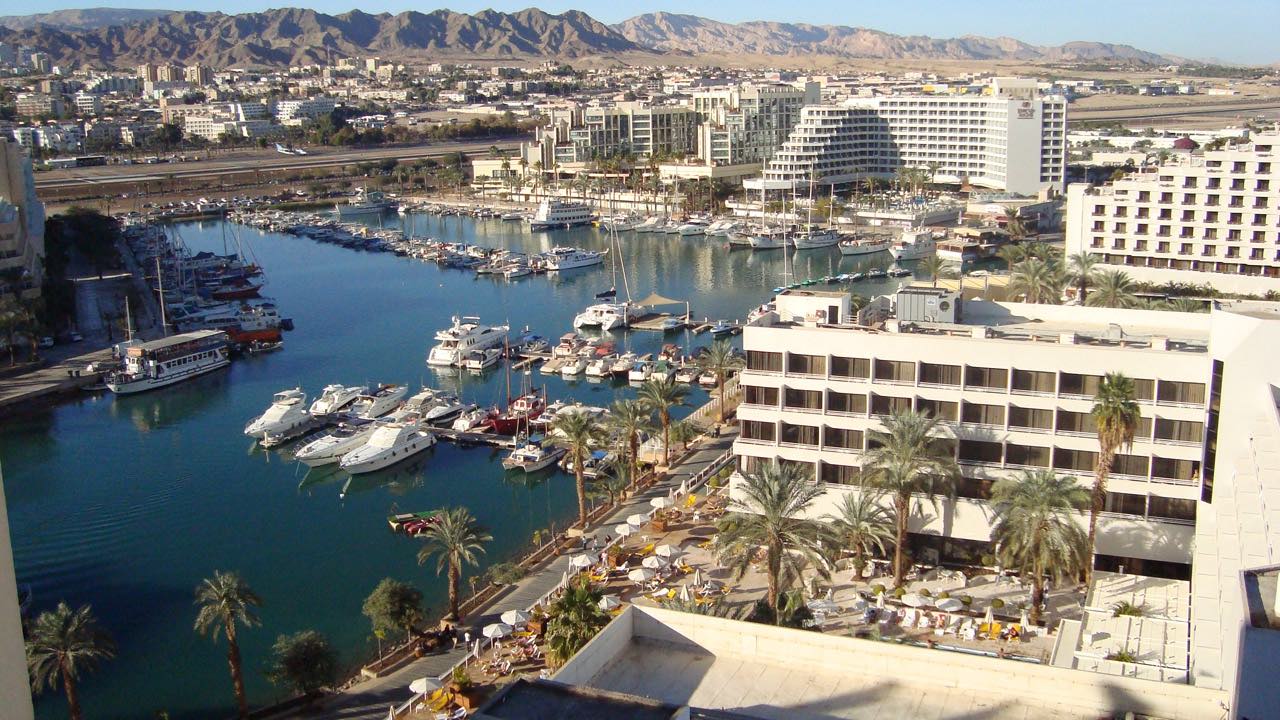 Israel’s holiday beach resort of Eilat is an ancient city, but its city centre is brand sparklingly new. The lovely coast that hems one side of the finger of Red Sea that separates it from Jordan, has had millions of shekels poured into its tourism infrastructure. The new beach promenades are beautiful and besides the three gargantuan hotels that lord it over the seafront, there are another 50 that tower over the city. It’s hard to imagine that this modern, trendy city is fashioned out of a desert.

Downtown Eilat is a gleaming waterfront with a series of white-washed high end retail outlets complemented by the Queen of Sheba Malls. Aside from its appealing demeanour, the beauty of shopping in Eilat is its duty free status. That means shopping is 20 per cent cheaper than elsewhere in Israel.

A Luna Park funfair colourfully lights up the night horizon and offers dare-devil rides and a ferris wheel. Bizarrely, there’s also, the circular shaped Ice Mall which hosts a myriad of shops, cafes, a snow-based theme park and an all-year-round large ice rink. 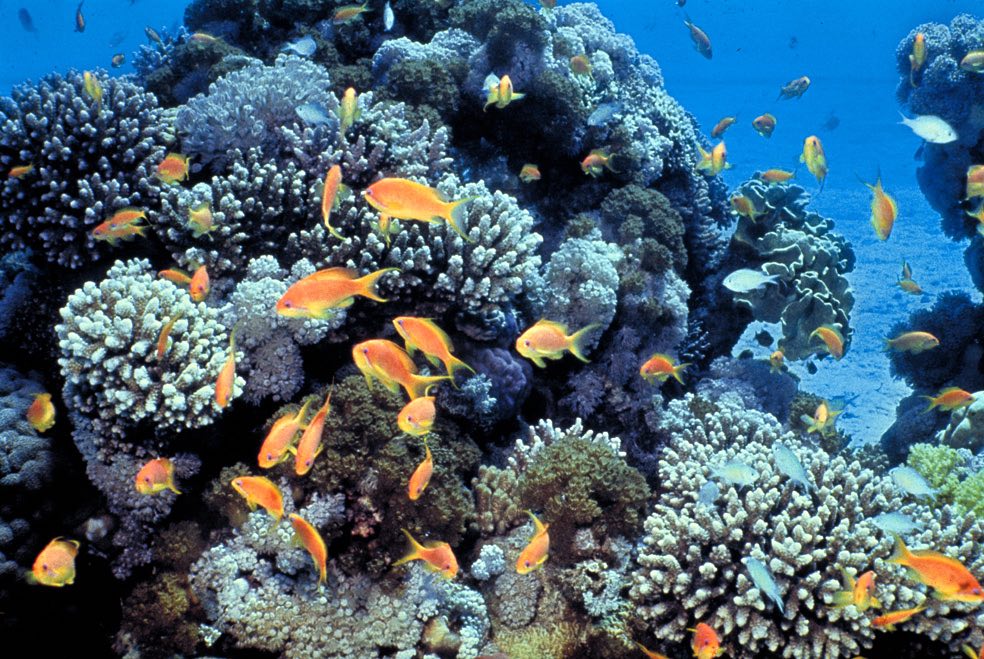 Around the curve of the bay is Coral beach, much loved by snorkelers and divers who appreciate the gorgeous 1,200 meter stretch of coral reefs and the 5,000 or so species of marine life it attracts. Young families though are better off at the North beach which does not have much coral but there are plenty of water sports, such as water bikes, water skiing and even banana boats in an area free of the dreaded sea urchins.

The Dolphin Reef is the jewel of Eilat. A gorgeous area, the Dolphin Reef has reared a flock of bottlenose dolphins in their natural habitat. It’s a joy to swim with them or even just to watch them from the pretty palm-dotted soft-sand beach while catching some rays.

These dolphins are not in captivity. They roam freely but like to stay local. This is because they make friends with carers and regulars and perhaps the free food could be a pull too. There’s a wooden pier that reaches out into the sea from where the dolphins are fed, and if you loiter there a while, they may pop by to say hi. 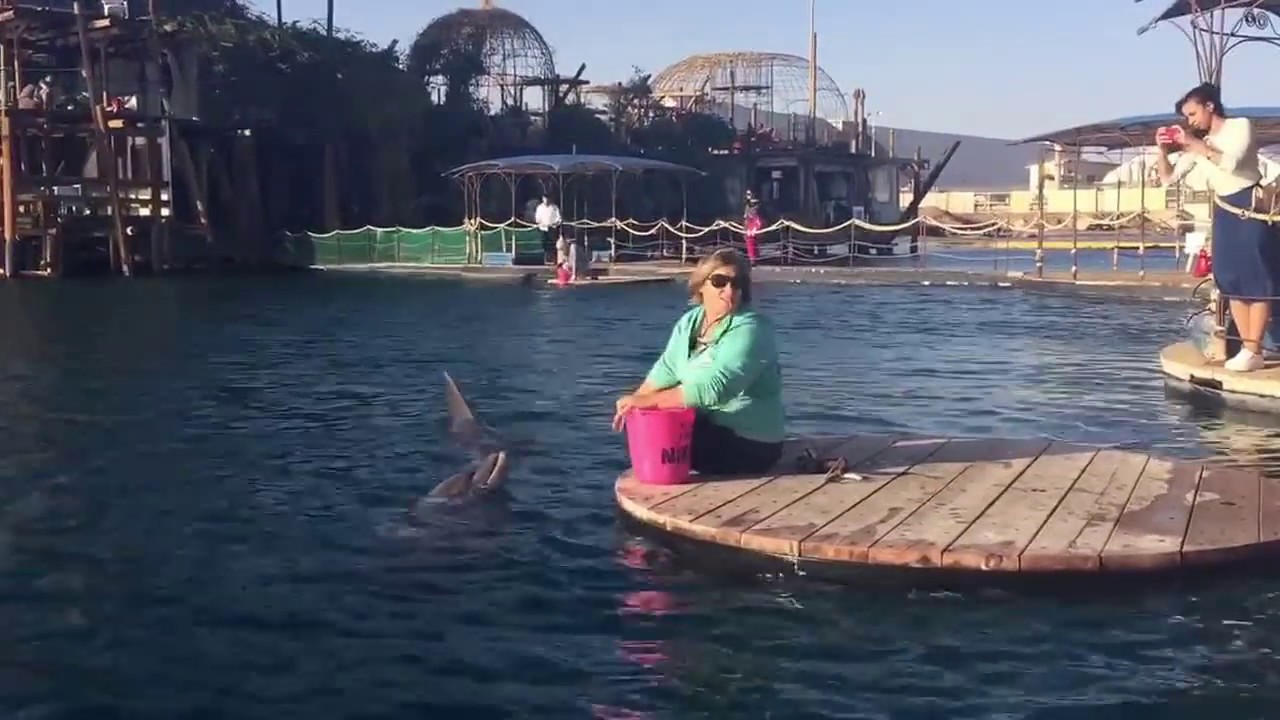 There is also a trio of heated wellness pools – one fresh water, one Red Sea water, one mineral water – and each has soothing underwater music. A session can be booked with a hydrotherapist who holds you gently in the water placing floats beneath the knees and back and by moving various parts of the body gently, stroking every now and again to induce deep relaxation. 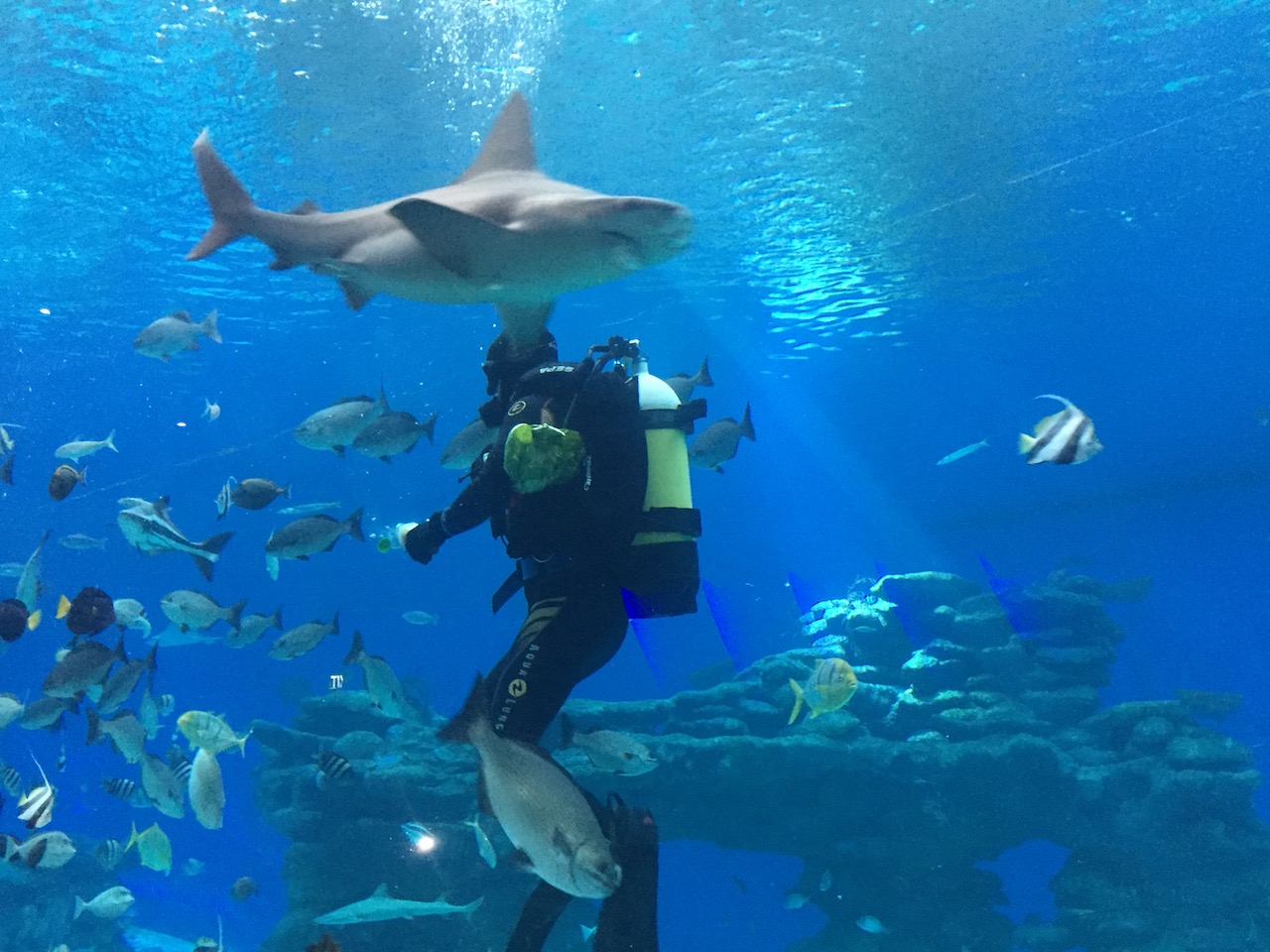 This is an underwater observatory where walls of clear glass means you can watch comings and goings of the deep blue sea. Above ground there are turtles to watch, exotic fish to stare at while they dart around corals and an Amazon segment where piranhas and anacondas seem harmless behind glass.

The highlight is the feeding of the sharks. In a flourish of showmanship, a diver swims among the fish and the sharks offering them food while engaging onlookers, especially children. It is tremendous fun that comes with a highly educational narrative. 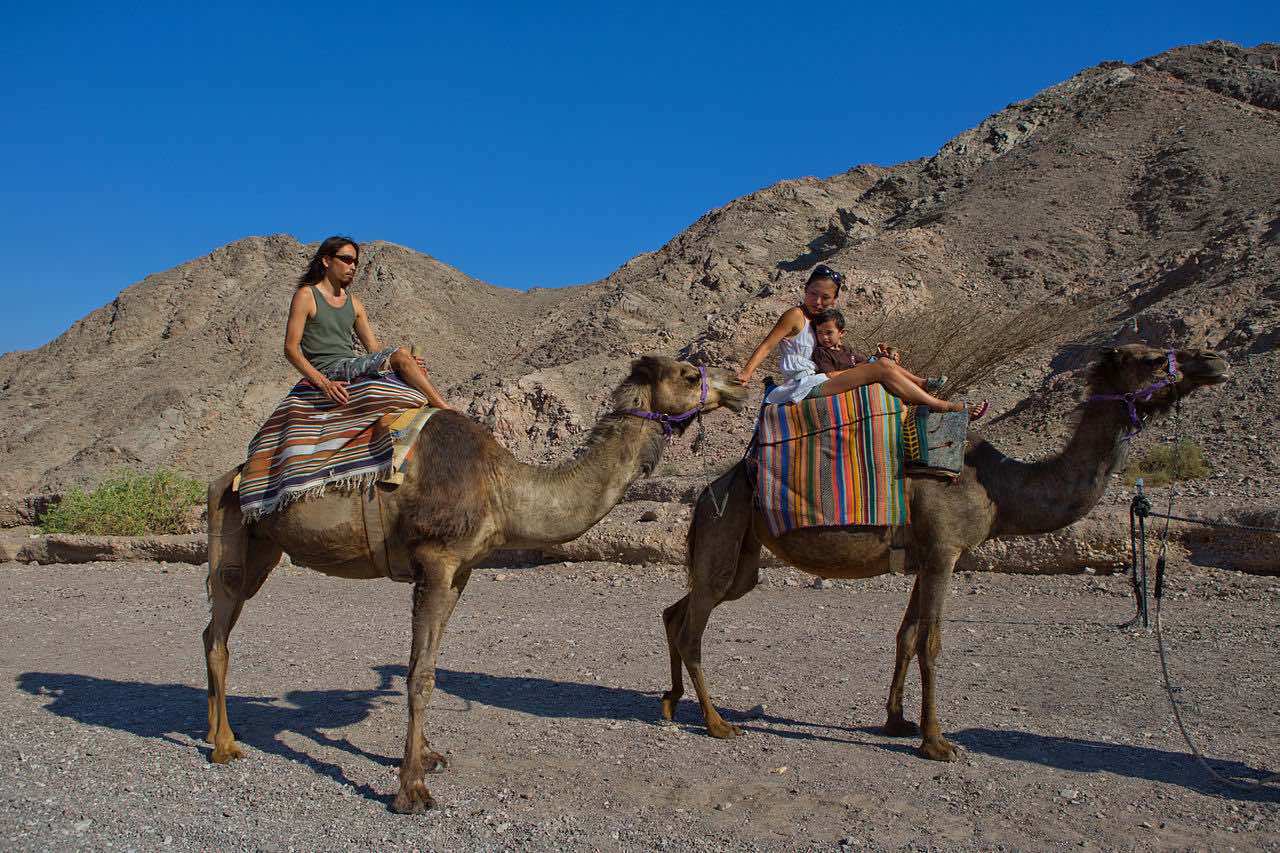 A camel trek through the desert can be fun especially a pleasant two-hour sunset safari that ends as the sun goes down. The guided tour includes is a snack of Bedouin pita made on the spot and eaten with labane cheese, olives and tea made from plants grown in the desert.

The backdrop to Israel’s seaside hotspot, the Arava valley, meanders around the city offering a frame of tors and peaks that look like swirling mounds of caramel alongside chocolate chip ice cream with the odd smudge of dark strawberry – telltale signs of the copper and other minerals that have survived the passage of time.

These are a teaser for what you could see at King Solomon copper mines at Timna Valley. This is a preserved area around 17 miles north of Eilat where amazing shapes have been naturally created in sandstone. Or indeed for a jeep drive into the Arava valley where acacia trees flourish so that the Ibex can shelter under their canopies.

This dairy restaurant may be located away from the city centre at Sderot Hatmarim, yet it could be a great place to start the day. For around 50 sheckels you can tuck into a hefty Israeli breakfast of salad, cheeses and shakshuka, New York style bagels, pizzas, pastas, baked potatoes, salads and soups are prepared in their open kitchen in a casual environment.

This atmospheric English pub is easy to find on the Royal Beach Promenade. Every night Israeli DJs and live bands pump out oldies and new chart songs while punters drink beer (there’s a large selection), wine or cocktails. There’s lots of space for dancing too.

Sushi and Japanese style cuisine is fast becoming an Israeli staple and the up-scale dimly lit Yakimono restaurant delivers probably the best kosher Japanese grub in Eilat. Stroll down the North Beach boardwalk and you’ll find it in the Royal Beach hotel where a menu spanning several pages offers seaweed salads, sashimi, sushi,tempura, dim sum and skewers of chicken and meat in teriyaki sauce. There are 130 tables including those on the terrace which overlook the Gulf of Aquaba and the marina.

This stylish restaurant is located on the North Beach lagoon. It’s been there for around 30 years but still looks modern and contemporary. You can dine on sushi, calamari teriyak, sea bream and salmon dishes – cooked to perfection – while enjoying the views over the marina.

Hop to the Brewery: Hamivshala (The Brewery)

Hidden in the industrial part of Eilat is this micro brewery. It has a casual, calming ambience with lovely home-made decor and furniture. The trio of owners literally made their own tables and chairs with their own hands – even creating lights using beer bottles for light shades. Food is freshly made and you get a beer tasting platter of up to six beers that they have brewed themselves, to sample before buy. You can see the brewery itself from your table. It’s a small space but it has a great vibe and the likelihood is you will end up staying longer than you thought you would.

Attached to the Dan Eilat hotel on the North Beach broadwalk, this restaurant serves what is probably the best gourmet Israeli/Middle Eastern food in the city. The entrecote steak melts in the mouth while the lamb and chicken whether skewered, kebabs or shawarma is soft and succulent. There are salads galore rice, falafel and hummus and probably the best chips in town.

Though this seaside resort is sunny all year, (average 25 degrees) the hottest months are July and August with temperatures hovering around 33 degrees. January is the coolest month with an average of 14 degrees but the skies remain blue and brightly lit by the sun.

Since Monarch went into administration there is no longer a direct route to Eilat. However you can fly into Tel Aviv airport and its a short domestic flight to Eilat.

Dan Eilat is probably the best located hotel on the resort. Read our review

Inflight entertainment takes off with Qantas – free Netflix and Spotify