Japan: Why Dewa Sanzan is loved by pilgrims 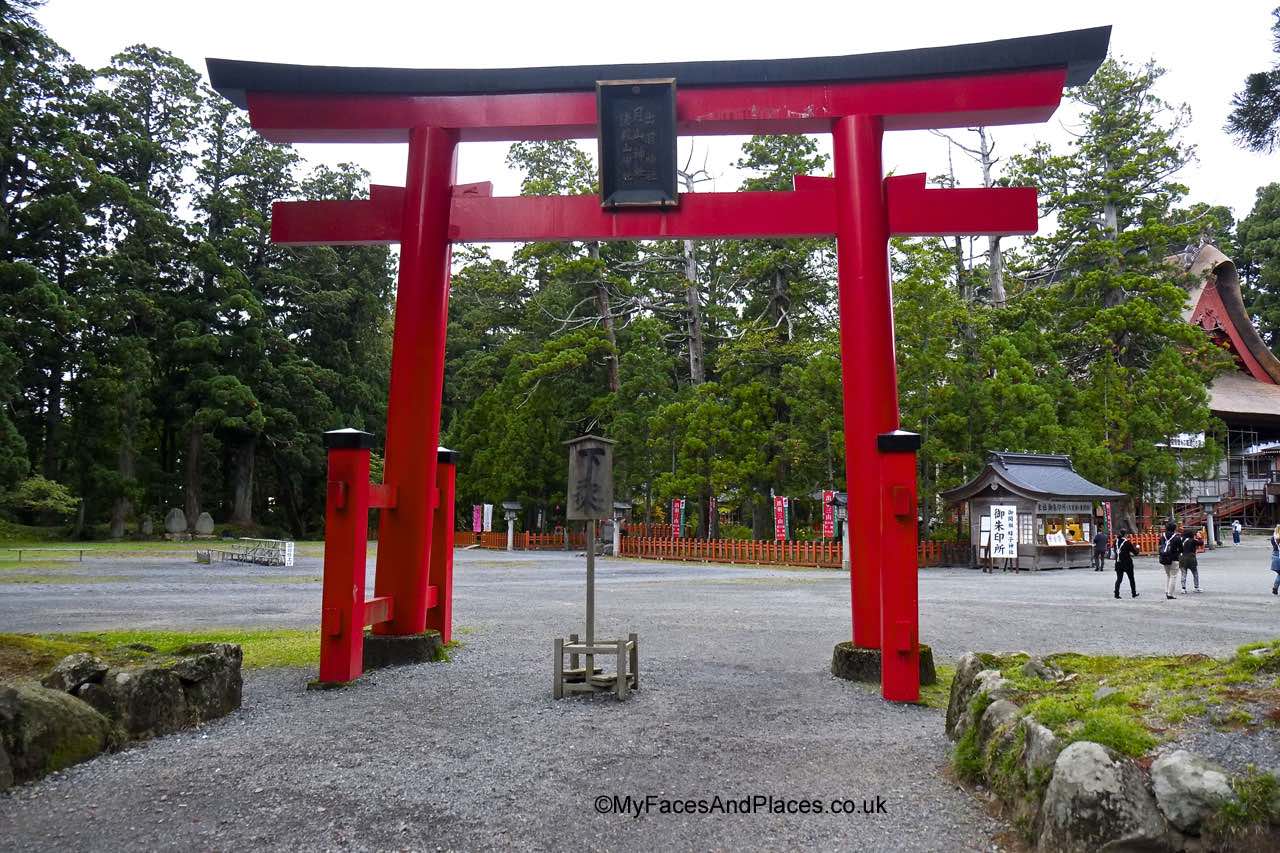 When you seek enlightenment, you could do worse than a pilgrimage to Japan’s largest island Honshu and in particular to Tohoku.

Tohoku, a region in the northeast of Honshu, is blessed with glorious natural beauty of majestic mountains, volcanic lakes and steaming hot springs amid ancient cedar forests. The mystical landscape lends itself as the abodes of the gods according to the local belief. Against this setting lies three holy mountains that together are known as Dewa Sanzan. They are regarded as one of the most sacred sites in the country.

This is where the spirit of Japan lies in its traditional and religious culture and where ancient mountain worship is still very much practised. Against this background we embarked on an epic journey to trace the footsteps of pilgrims who are followers of Shugendo, a folk religion of animism with influence of Buddhism, Shintoism and Taoism.

In essence, Shugendo seeks the path of enlightenment through strengthening the bond between man and nature. They believe nature is a manifestation of the gods and should be treated with reverence. 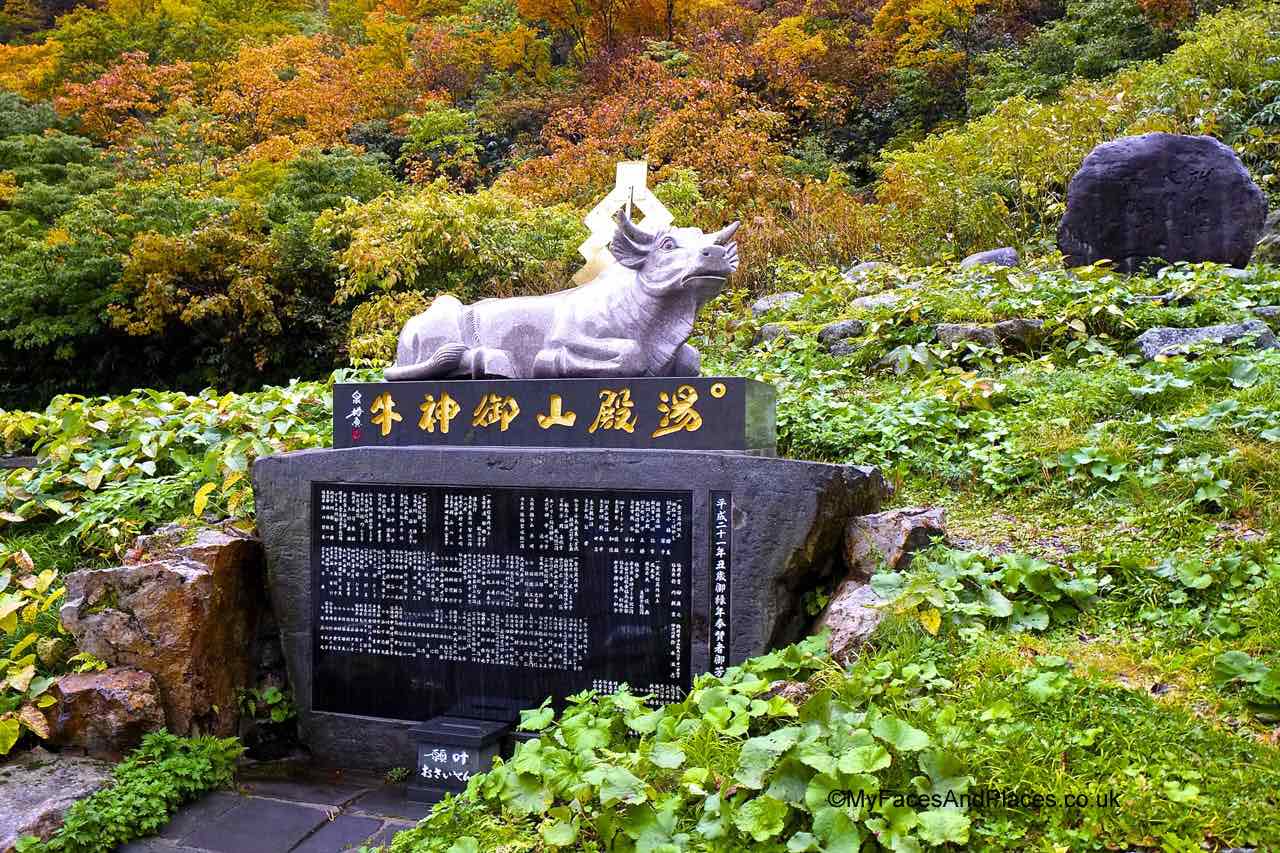 The circle of life

Mountains and forests have paramount importance in Shugendo. The Dewa Sanzan mountains of Mt Haguro (419m), Mt Gassan (1984m) and Mt Yudono (1504m) are the centres of pilgrimage in the region. The followers known as Shugenjas or Yamabushi (mountain monks) have been following the rites of worship for the last 1400 years.

Followers embark on long pilgrimages and practise austere feat of physical endurance of natural elements as an ascetic rite of passage to gain spiritual power. We had the privilege of experiencing the immersive ceremony of Shugendo first hand by tracing the footsteps of the pilgrims and visiting the three sacred mountains that represent spiritual birth, death and rebirth at Mt Haguro, Mt Gassan and Mt Yudono respectively. 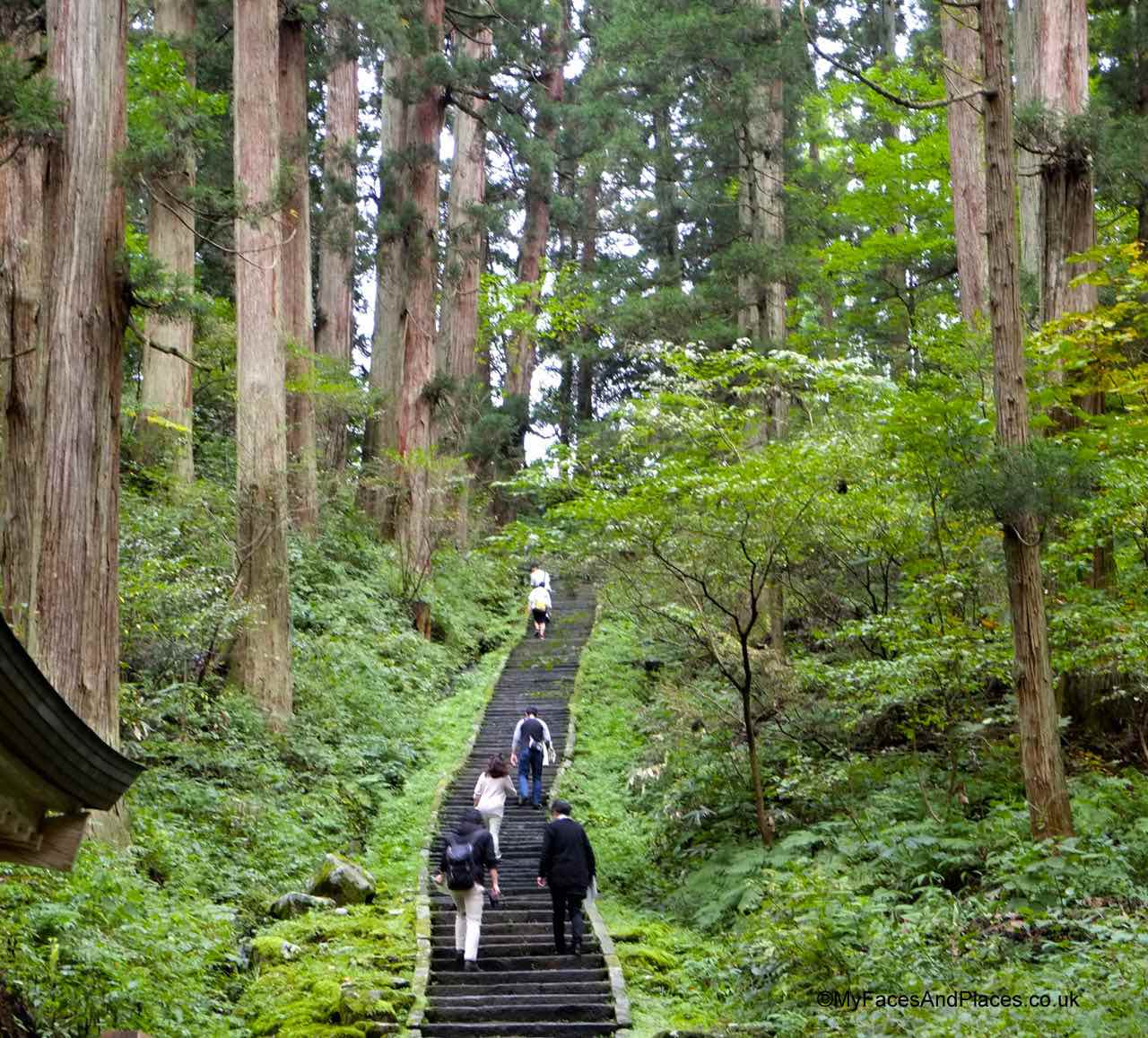 The 2,446 Ishi-Dan stone steps to the Sanjin Gosaiden temple on the summit of Mt Haguro (c) Helen Oon

We arrived at Mt Haguro as dusk was setting in when we entered the sacred site through the torii, a wooden gateway that is found in all sacred sites in Japan. A long flight of stone steps known as the Ishi-Dan led down to an enchanting forest with towering cedar trees along the ancient pilgrim route. The 1.7km trail built in 1648 has 2,446 steps leading to the Sanjin Gosaiden shrine at the summit.

There are 33 carvings etched on the steps and it is believed that if you can find all 33, your wishes will come true. We followed the sacred path as far as the 600-year-old Goju-no-to, the Five-Storey Pagoda, a gazetted national treasure. In the gloom of the forest, the ancient Pagoda exuded an air of veneration that lent to the belief that a deity of the forest lives in it. Along the way there were shrines that house the gods that will protect humans against evil spirits that may lurk in the forest. 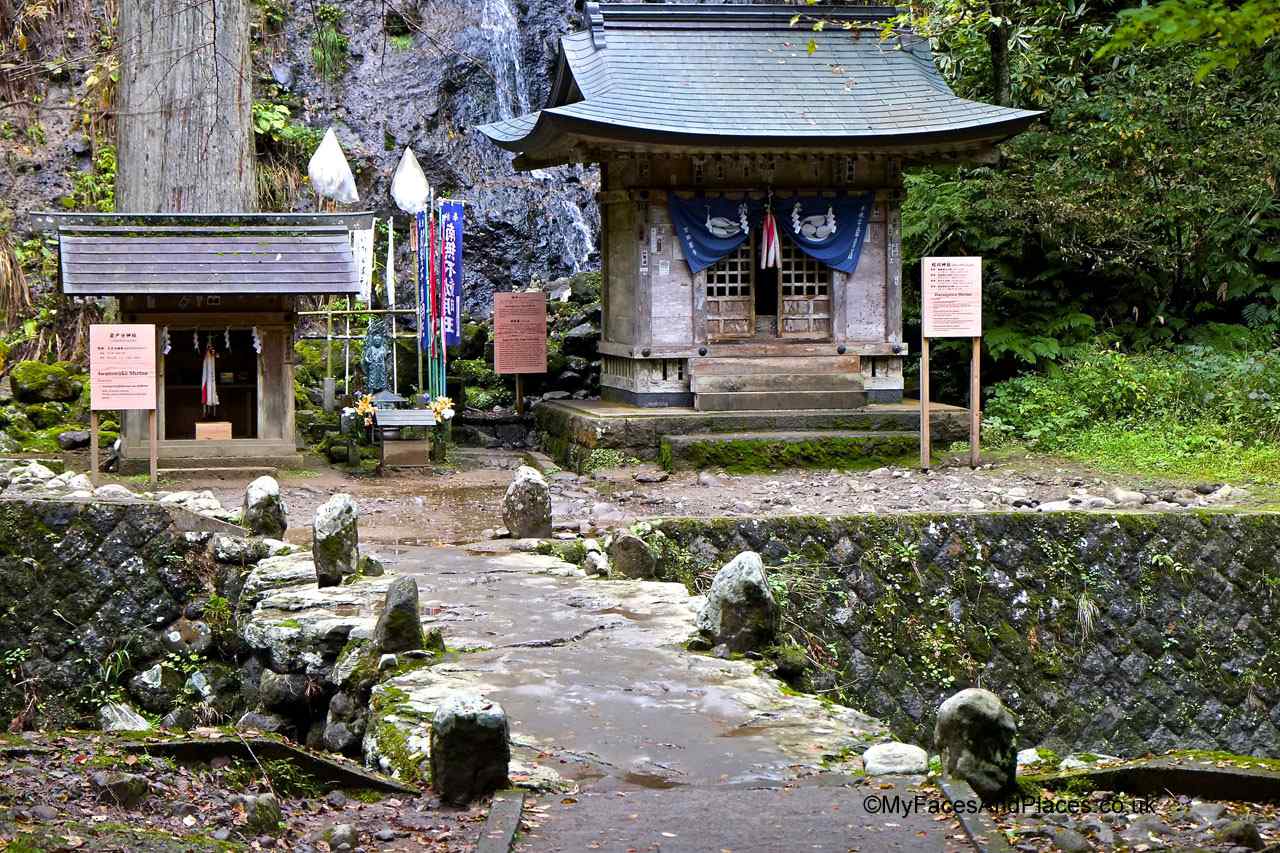 Close encounter with the gods

When we arrived at Sanjin Gosaiden, the main shrine at the summit, we were met by a Yamabushi dressed in his traditional religious garb of a loose coat of black and white checks worn over baggy white trousers. He sounded a hora, a religious conch trumpet, as a welcome and to ward off bad spirit. 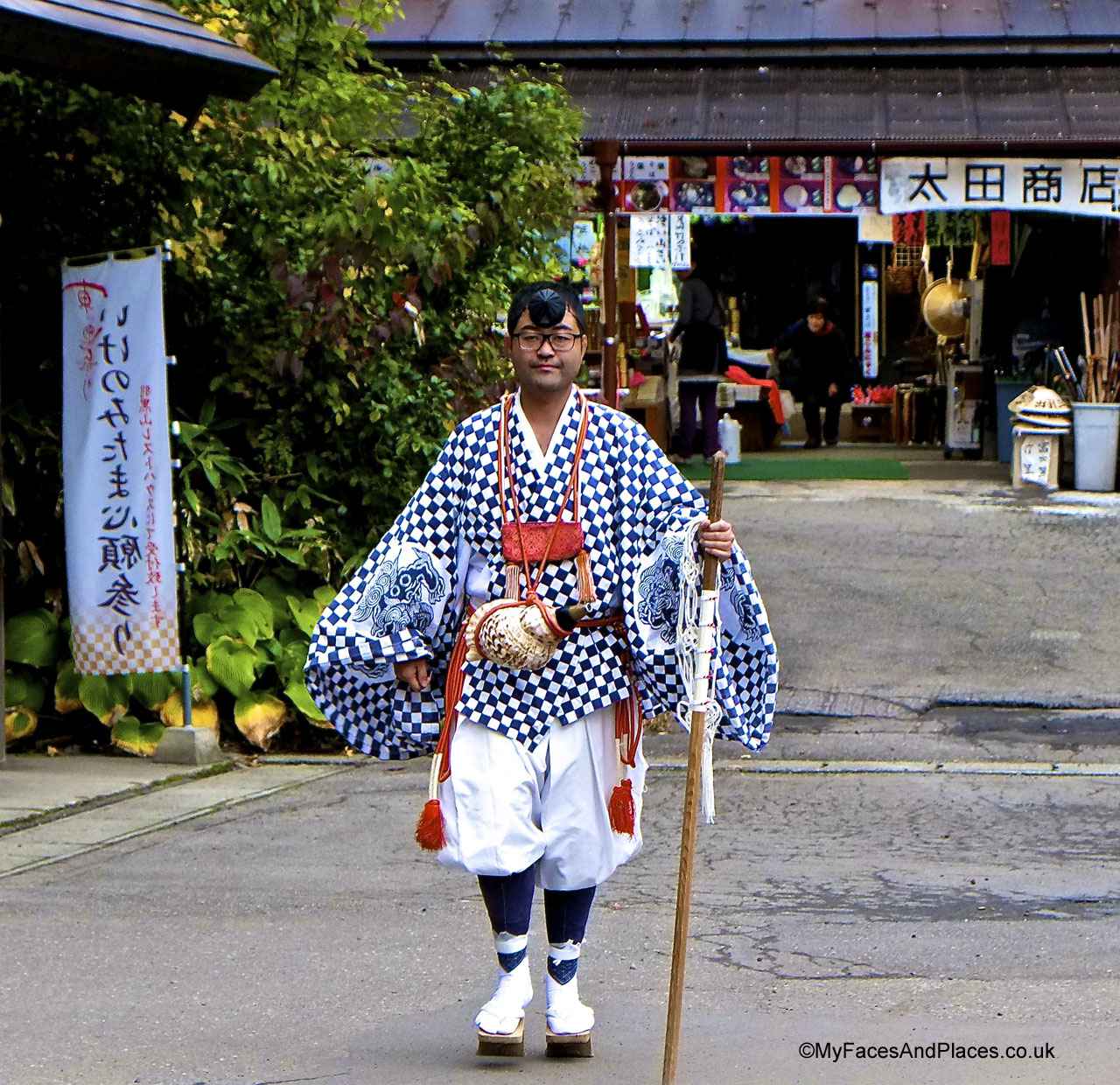 We were led to the shoden, the inner sanctum of the shrine. There, a monk dressed in a splendid ceremonial robe with motifs of cranes performed a special ceremony by beating a drum and wafting a pole with white paper strips attached to the end followed by ringing bells to ward off any malevolent spirits. He then knelt before the altar that housed the shrines of the three deities of the sacred mountains and chanted some mantras in a trance-like voice. His voice reverberated around the room sending powerful vibration into the ambience. We transcended to a wondrous spiritual world as we completed the ritual where we were “spiritually born”.

We headed to Mt Gassan in howling wind and rain to visit a shrine. The pilgrimage trail was officially closed for the season but we braved the element by treading precariously on a path of slippery wooden walkway laid across a marshland of dwarf bamboo and grassland. After twenty minutes’ walk, we reached a small shrine presided by a giant stone rabbit, the guardian of the mountain. There were stone tablets with religious significance standing sentinel to the shrine. This mountain symbolised the path to the spirit world so one could be reborn. In the summer, pilgrims could hike to the summit where the main shrine lies and from there, they could also hike to Mt Yudono the last mountain on the pilgrim’s trail. 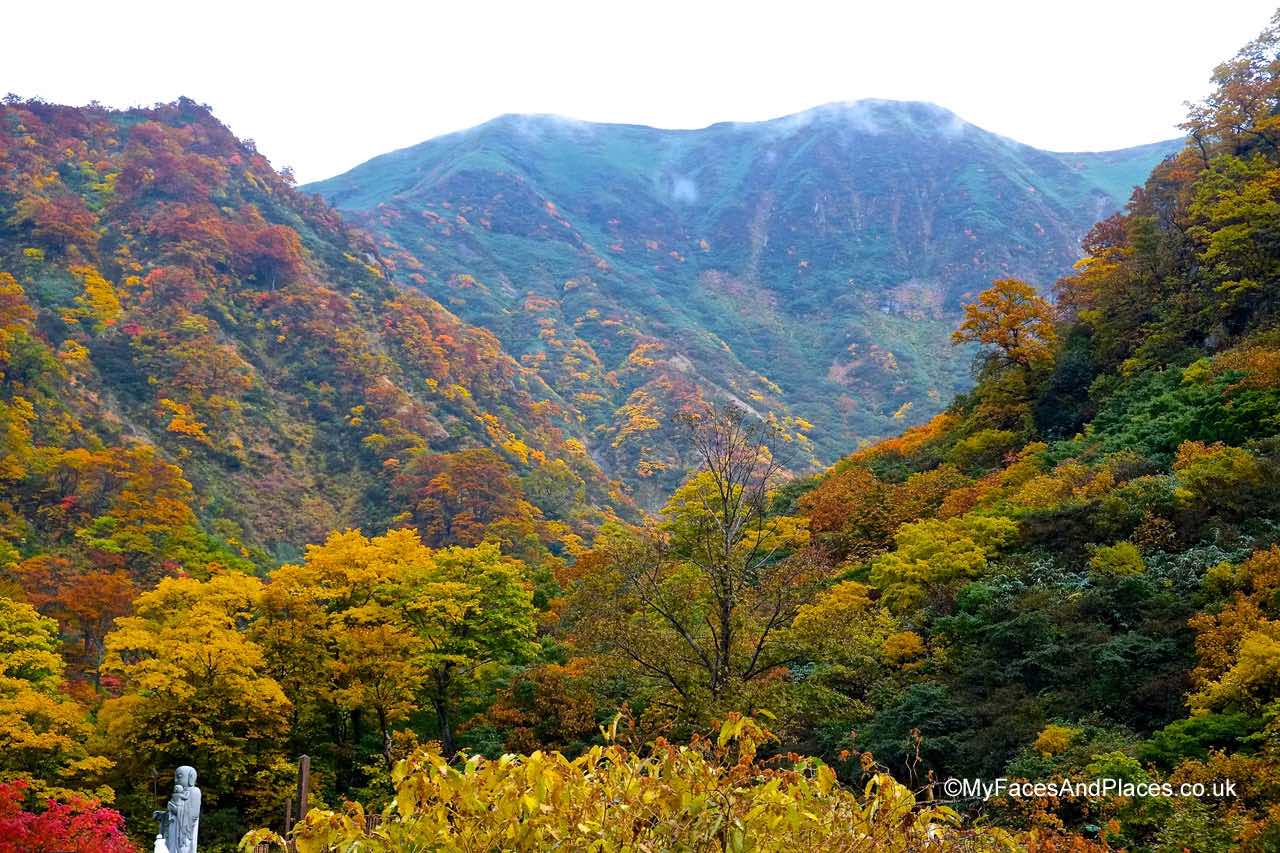 Our visit to Mt Yudono was an epic experience where we underwent a ritual to be spiritually reborn to start a new journey in life. It is taboo to divulge the secret of the ritual but suffice to say that the experience is something I will always remember. Mt Yudono was spectacular with autumn colours when we were there and the sheer splendour of the red and gold foliage-clad mountain magnified the sacredness of the place.

Dewa Sanzan is a pilgrimage but mere mortals with spiritual interest may find the journey enlightening and soul stirring. Reflecting on my own surreal experience of the religious encounter, I realise now why some mountains belong to the realms of the gods.

We stayed the night at a Shukubo, a traditional temple lodge owned by a Yamabushi. The delightful lodge was immaculately clean with minimalist décor and furnished with only futons in the bedroom. We were served a delicious vegetarian meal of pickled and braised wild mountain vegetables, small portions of grilled fish and bowls of miso soup with silken tofu laid out delicately in small dishes on trays. I would highly recommend staying in a Shukubo to attain a Zen state of mind. Early next morning, our landlord performed a morning blessing for us with a full ceremony and chanting to bless us and wished us safe journey to Mt Gassan and Mt Yudono.

Note: It is best to avoid the pilgrimage peak season in the summer when lodgings in the area would be fully booked.